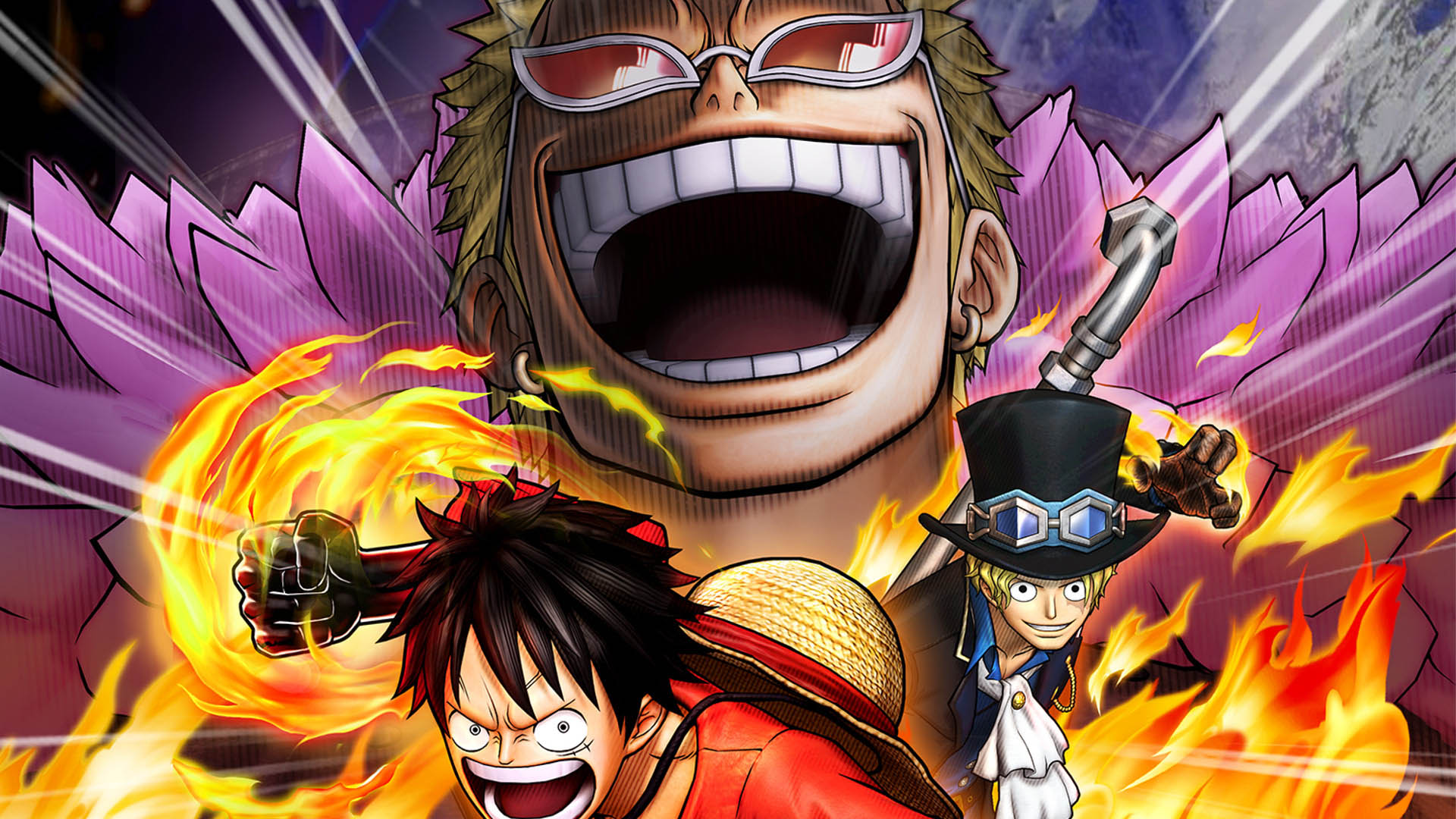 The best-selling manga and anime sensation get its first new-gen game with One Piece Pirate Warriors 3.

I’ll be honest right now and say that I didn’t immediately put my hand up to review this one. Whilst I’m a great fan of manga and anime, Japanese manga-based games are most definitely an acquired taste.

Featuring over the top characters, manga tales often feature bizarre stories that are hard enough to follow on the printed page, let alone punctuating often equally weird gameplay. Peculiar dialogue and jokes that get lost in translation can make for a rather unique and quirky gaming experience.

If you are prepared to stick with it, what you end up with is usually something delightful and very different. 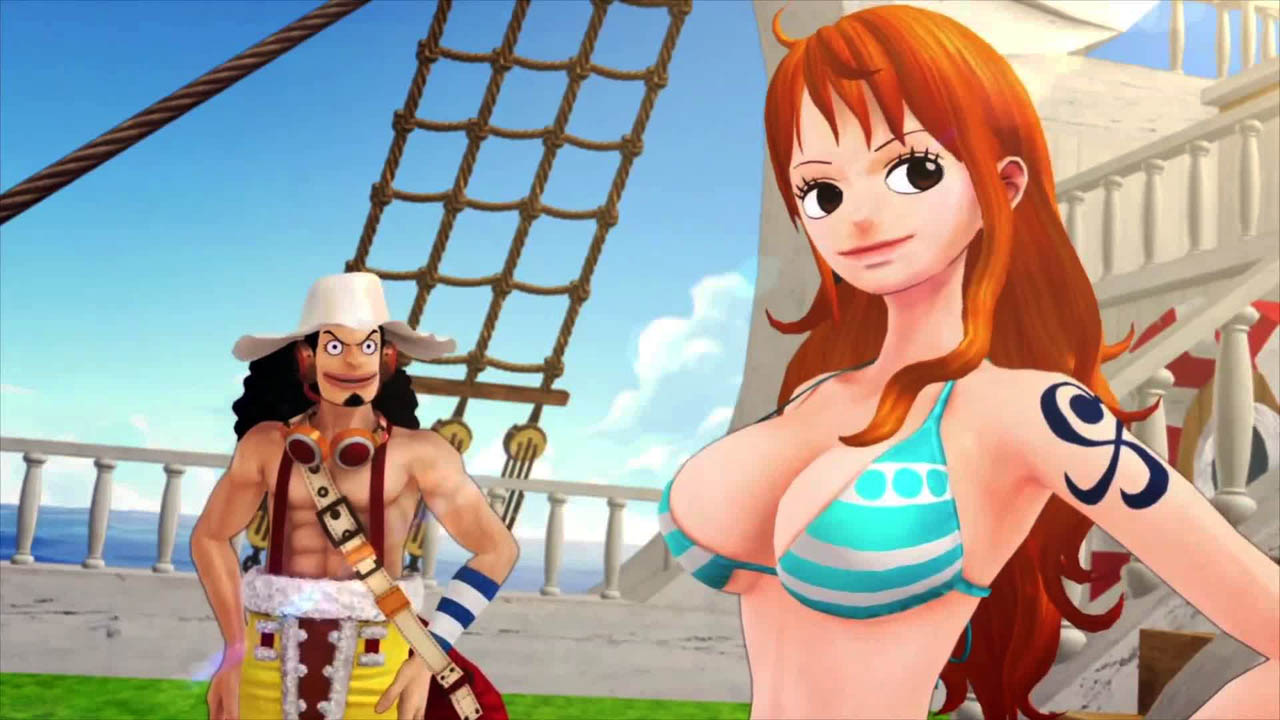 The One Piece manga series, written and illustrated by EliichiroOda started out as a serial in Japan’s famous Shōnen Jump weekly anthology magazine. It has since been collected into graphic albums, available the world over, spawned a cartoon show by Toei Animation as well as many animated feature films.

Hugely popular in Japan, One Piece has had dozens of video game adaptations, only handful of which have made it to the west. Bandai Namco’s Pirate Warrior series is one of those exceptions that have made it to our shores.

One Piece Pirate Warriors 3 re-tells the One Piece story from the beginning, following the series protagonist, Monkey D. Luffy as he assembles his pirate crew and sets off in search of the fabled One Piece. 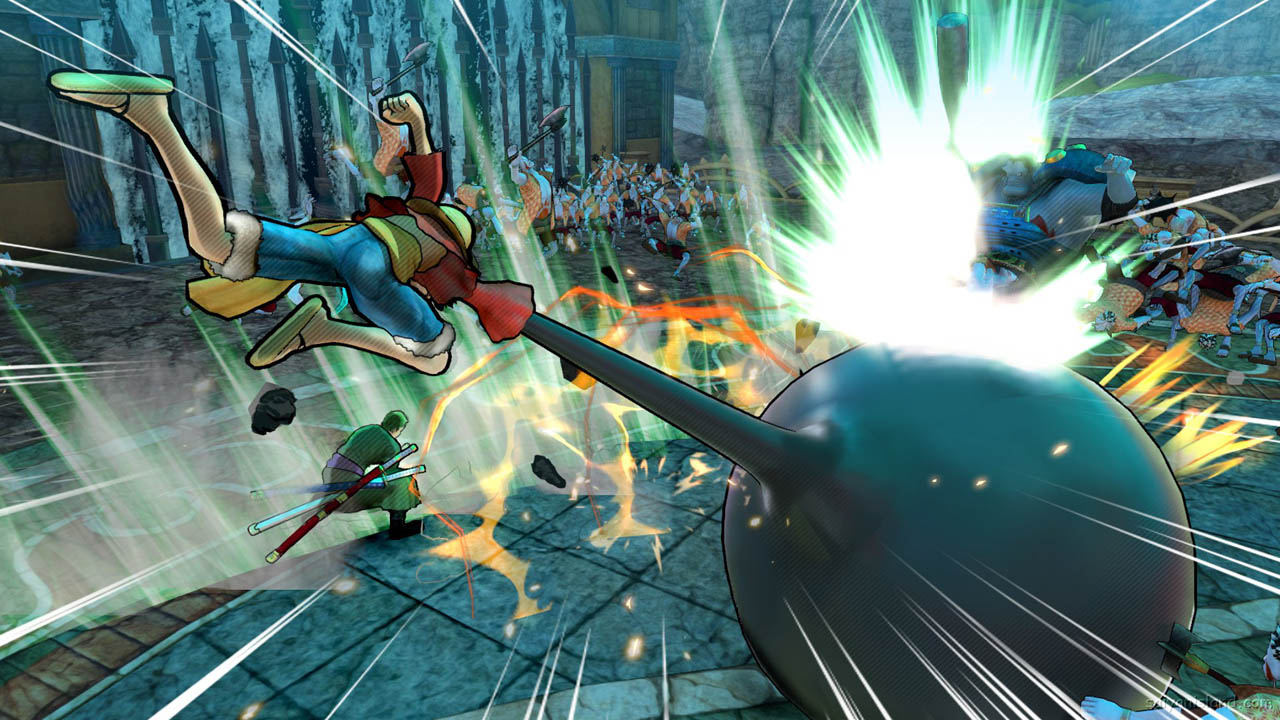 The games visuals carry over the striking style of the original manga. One thing I would say is, in translating 2D designs into 3D graphics, some of the characters’ facial expressions look down-right frightening. Other than that the game is very nice to look at.

The game will be very familiar to fans of Koei’s Dynasty Warriors series as it shares many of the same game mechanics with the classic third-person combat game. In One Piece Pirate Warriors 3 Luffy and his crew of Straw Hat pirates engage huge battalions of bad guys and bosses in a series of skirmishes.

From the main menu, the Legend Log gets players into the main One Piece Story, starting from the very beginning, whereas Free Log gains access to any unlocked episode.

The new Dream Log offers an alternative way to play away from the main story campaign using other unlocked friends and foes. Players progress from one island to another by defeating enemies across battlefields. 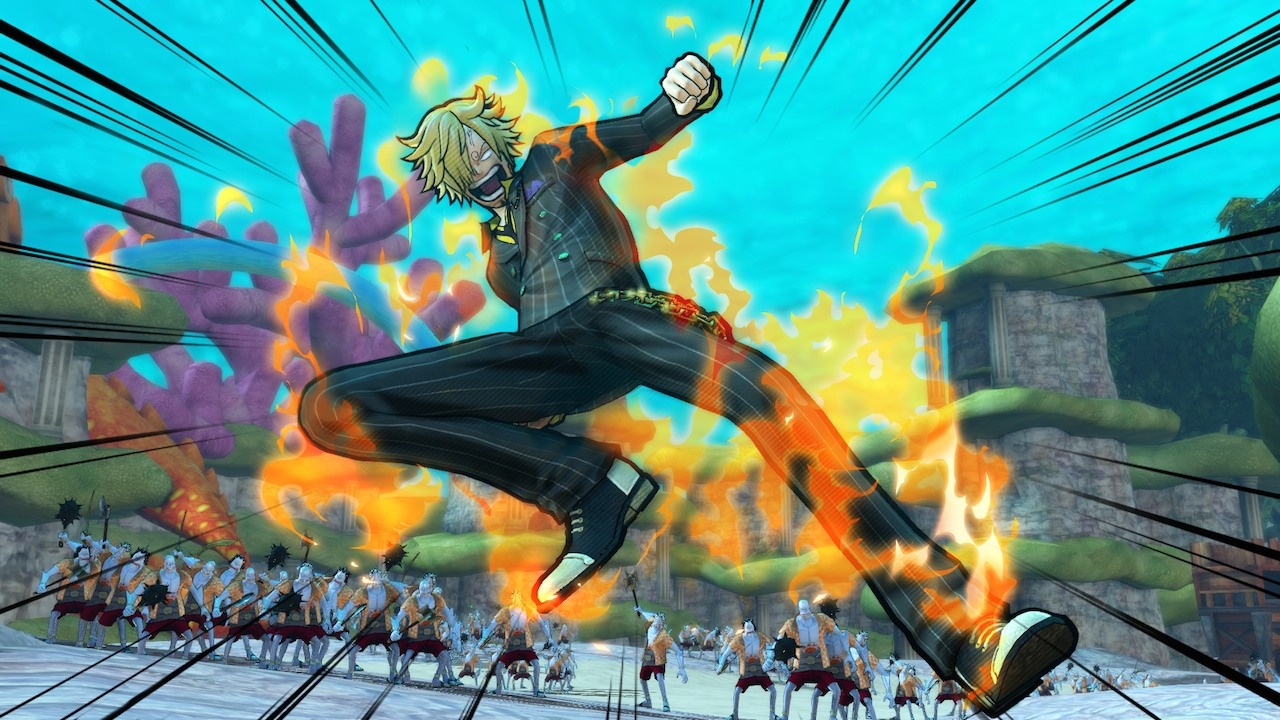 Online mode allows players to experience the game with others either by jumping into a game or by setting up your own from the list of unlocked episodes.

All the game modes can be played two player split screen, making One Piece a great game for a bit of couch multiplayer, something that many games seem to be overlooking as of late.

To progress, players must fight their way across battlefields to their mission goals, on the way capturing areas from the enemy. There are literally hundreds of bad guys on the screen at once and it’s just so satisfying to see them all pounded, cartoon-like, into the air as you cut through them.

The Legend Log is based around a series of episodes consisting of a number of missions. These are basically huge battles, each with a number of victory and defeat conditions, such as defeating the pirate captain or game over due to the death of a character. 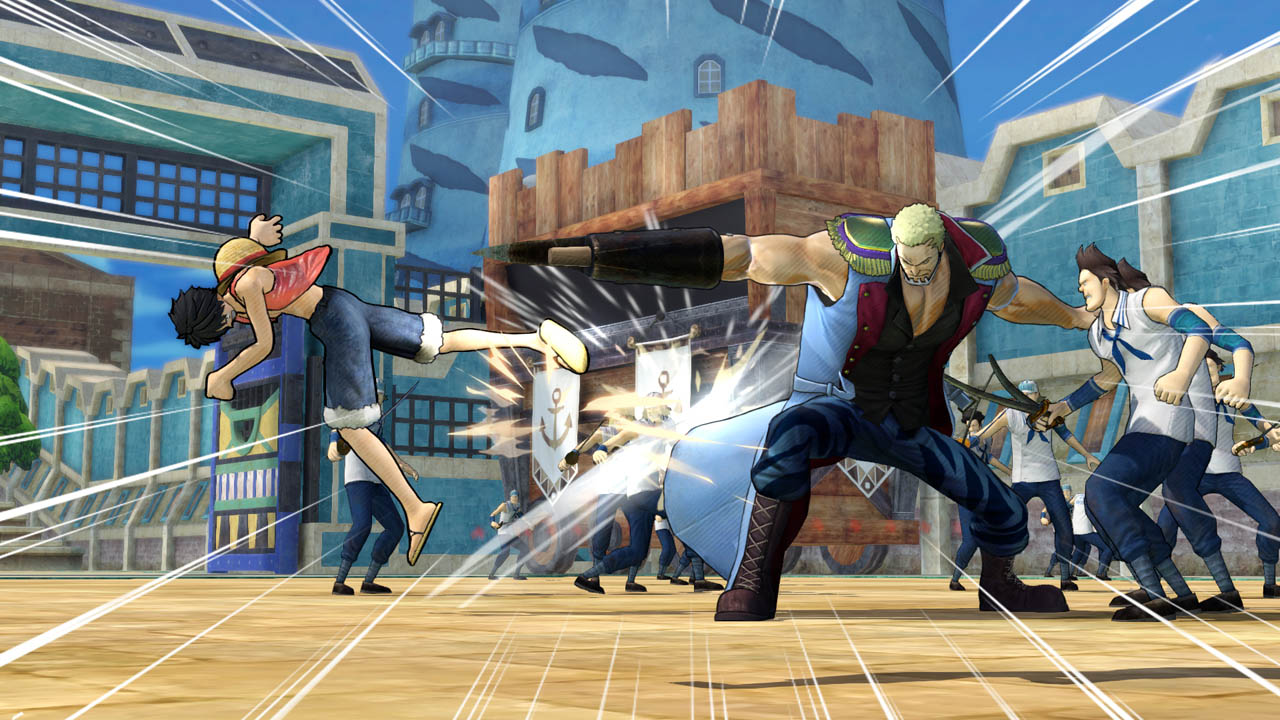 Between each bout players are treated to a mix of manga-style motion graphics and 3D animation telling the story of Luffy and his adventures. The Japanese dialogue has been retained with English subtitles.

Luffy possesses amazing elastic-like limbs, the result of eating one of the cursed Devil Fruits scattered about the world of One Piece. This gives him some pretty unique fighting moves, perfect for translation into a video game.

The controls are pretty basic, consisting of standard attacks, ranged attacks a special attack and the Kizuna Rush. This tends to lead to a battle becoming an exhilarating button-mashing frenzy. 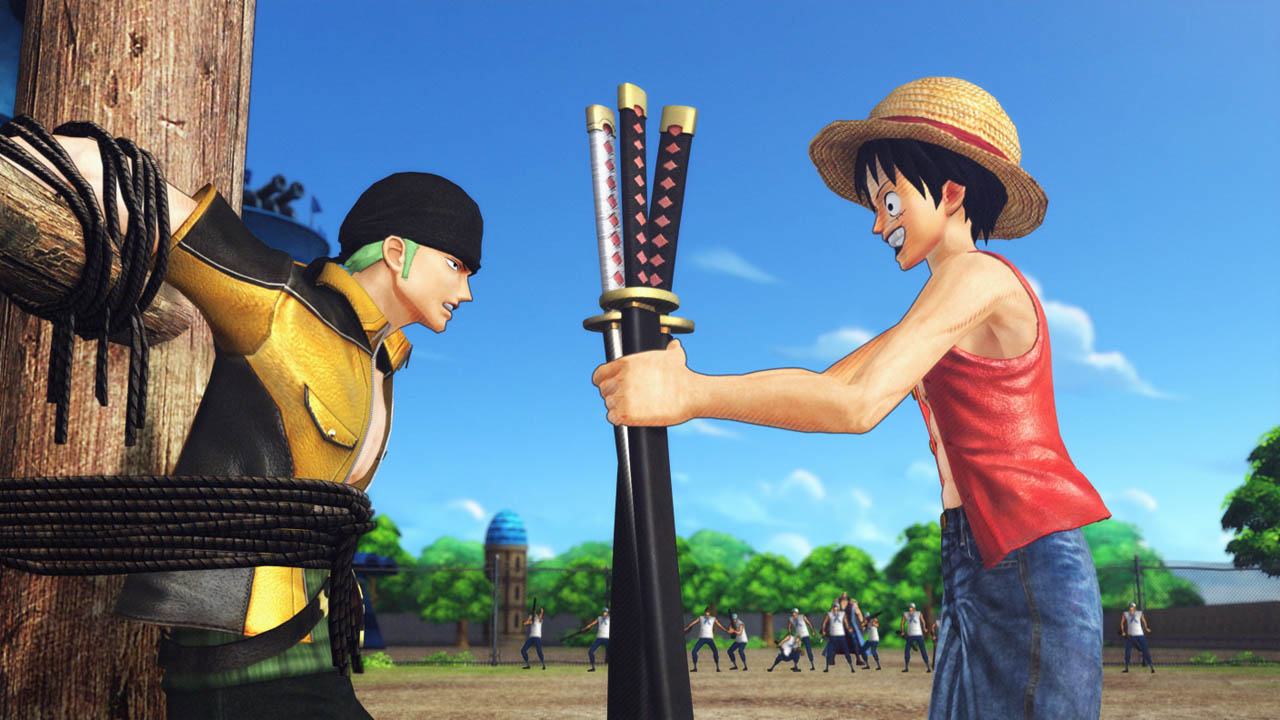 To be honest, whilst the power-ups and fighting mechanics are great fun, the gameplay does get repetitive after a while. If you are into the story, which is a huge part of the game, I don’t think this is a problem. The game is as much about the tale it’s telling as the actual gameplay.

What players get from the experience very much depends on their expectations. Even with the many different characters and their upgrades, the gameplay is pretty limited. But it is fun, more fun than it perhaps deserves to be.  If you expect a deep gameplay experience you are probably not going to get it. If you are looking for something different One Piece Pirate Warriors 3 offers pure escapism and a great way to enjoy the One Piece Saga.

It’s a great-looking game and fun to play. The combat isn’t really taxing and can get repetitive, but it is unusually satisfyingly, especially when you unleash a special move. Whilst I enjoyed Dynasty Warrior back in the day, I was surprised at how much I liked playing this game.

It’s not going to be for everybody, but worth a look if you are a One Piece fan or are after something different.