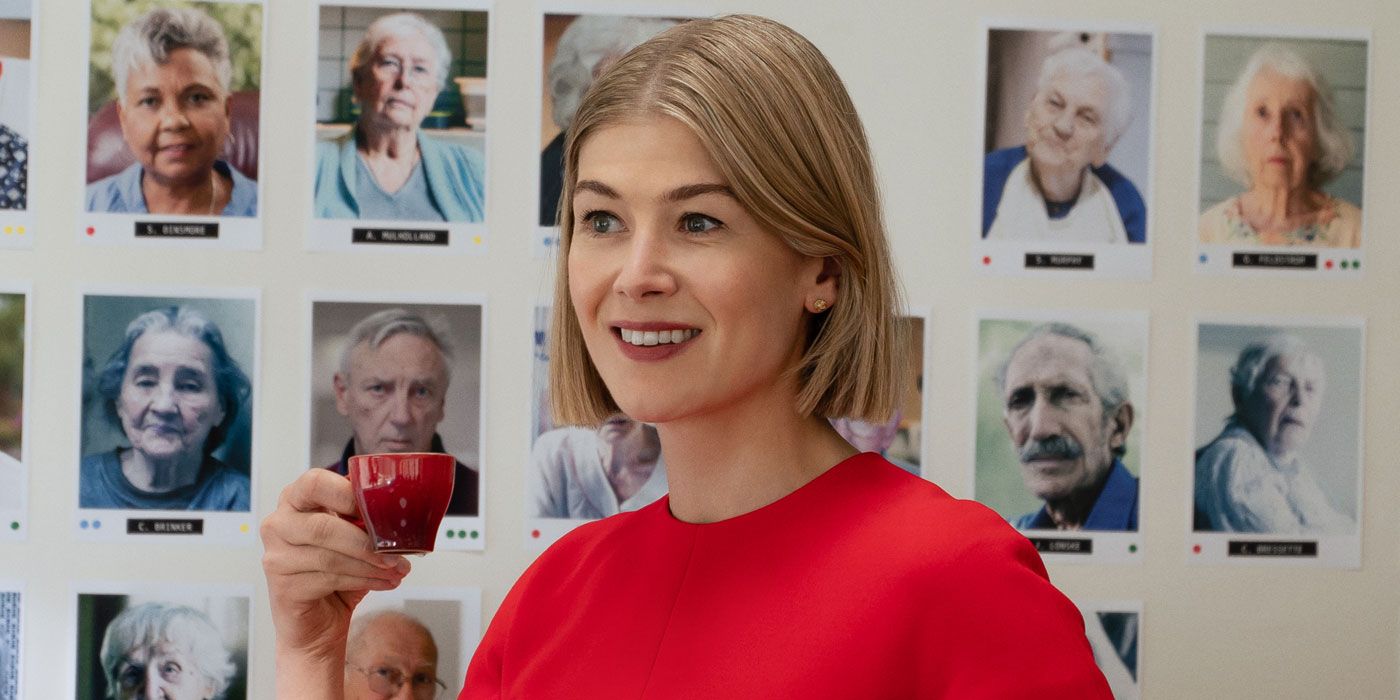 “I’ve been poor. It doesn’t agree with me,” Marla Grayson (Rosamund Pike) tells us.

And Marla’s constitution disagrees with poverty so much that she’ll do anything and everything to avoid it. Our acerbic narrator is the central character in I Care a Lot, written and directed by J Blakeson (Gunpowder, The 5th Wave).

Marla is a court-appointed guardian to vulnerable elderly wards. Her business, Grayson Guardianship, oversees the guardianship of numerous elderly people. With a sociopathic ruthless efficiency Marlaand business partner and lover Fran (Eiza González) swoop in to secure guardianship of elderly wards with the assistance of doctor Karen Amos (Alicia Witt).

Amos receives kickbacks in the form of stock in residential care homes while Marla sells off assets, provides care facility Berkshire Oaks with more residents and gives herself a nice fat fee in the process. 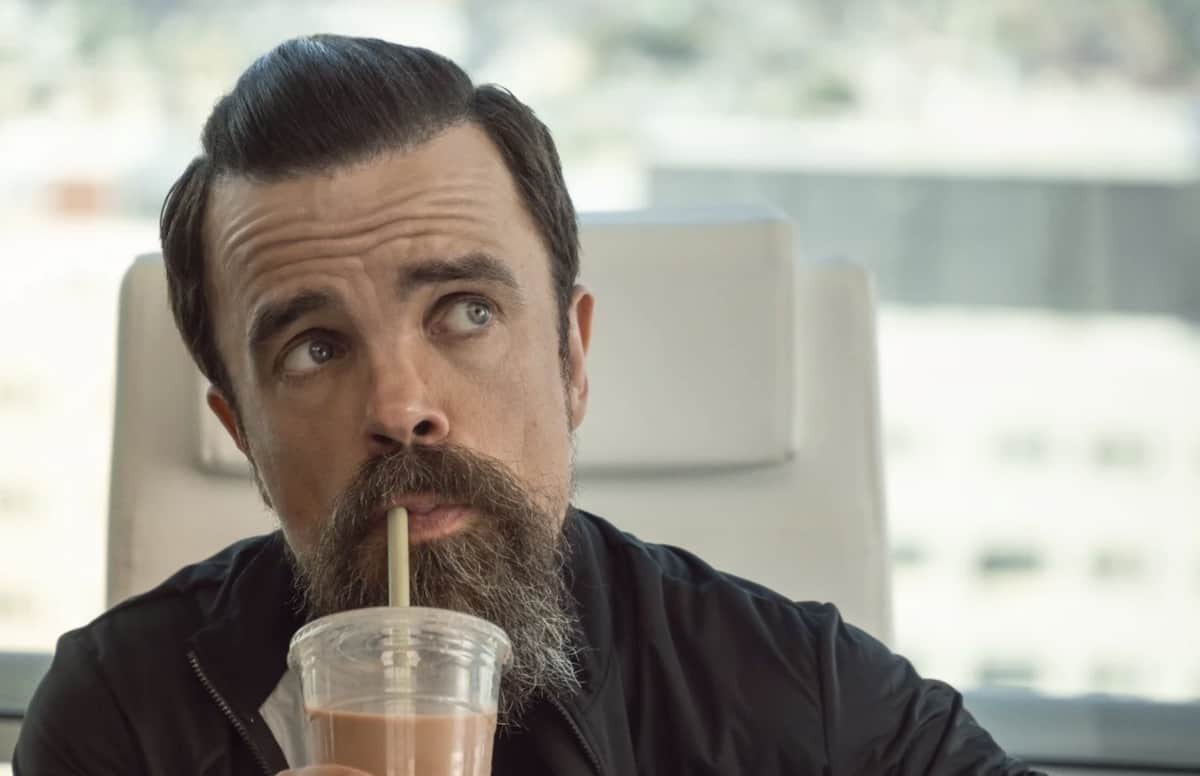 But Marla’s Machiavellian scheme is no match for Jennifer Peterson (Dianne Wiest). Identified as a ‘cherry’ (meaning she has been identified as having no children or relatives who could interfere with the process), Jennifer’s opulent home is ripe pickings for the greedy Marla, including a key to a safe deposit box which yields gold, jewellery… and diamonds.

Because the diamonds aren’t on the list of contents in the box Marla can’t resist pocketing them. Nobody’s going to miss diamonds they don’t know about… right?

But what Marla is about to discover in brutal fashion is that not only does Jennifer have a son, Roman Lunyov (Peter Dinklage), he’s now aware that Jennifer has been forced into assisted living against her will. Add to that the fact that he knows that the diamonds are missing, and Marla’s a marked woman.

I Care a Lot has an excellent premise and indeed it begins in a relatively satisfying fashion. It initially presents itself as a dry, dark take on the user-pays healthcare system in the US and how it can be exploited.

However, it then takes on a rather jarring tonal shift into a revenge thriller which doesn’t fit well. It’s like flipping a switch instead of a subtle move into the more action-packed parts of the film. It makes I Care a Lot feel like two different films warring with one another to get their point across.

That doesn’t mean that I Care a Lot isn’t a great film. 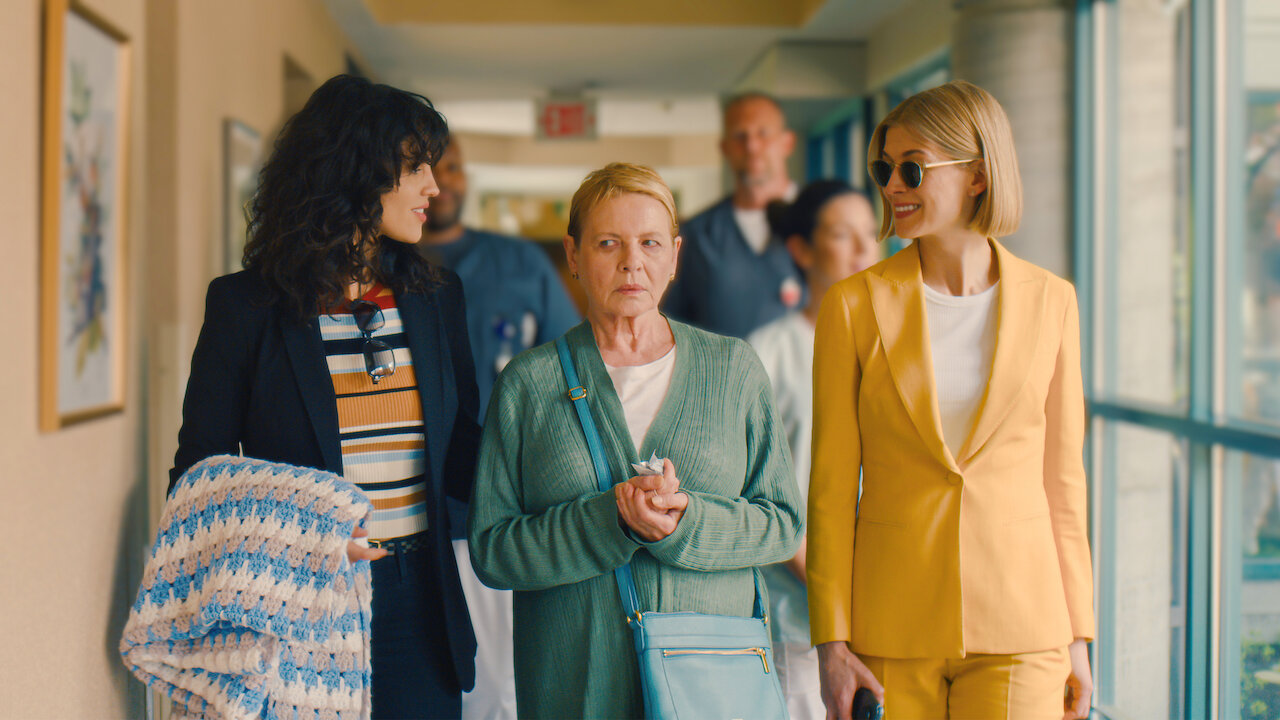 Rosamund Pike is exceptional at being bad (think: Gone Girl’s Amy Dunne on steroids), and the adversarial relationship between Marla and Peter Dinklage’s Roman is excellent. But Dianne Wiest’s Jennifer is all but abandoned once she has been liberated from the care facility and that feels like a wasted opportunity to utilise an accomplished seasoned actor and flesh out her role even more.

I really wanted to care a lot more about I Care a Lot.

The performances are faultless, but the film might have been more rewarding had it continued to be more about Marla’s grifts with a revenge plot that fit with the initial tone of the film, instead of going over the edge.

The film does redeem itself somewhat in the last twenty minutes with some satisfying twists, but in some ways it’s not enough to salvage a film with far more potential than is executed in the final cut. 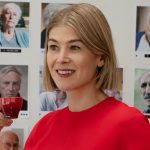