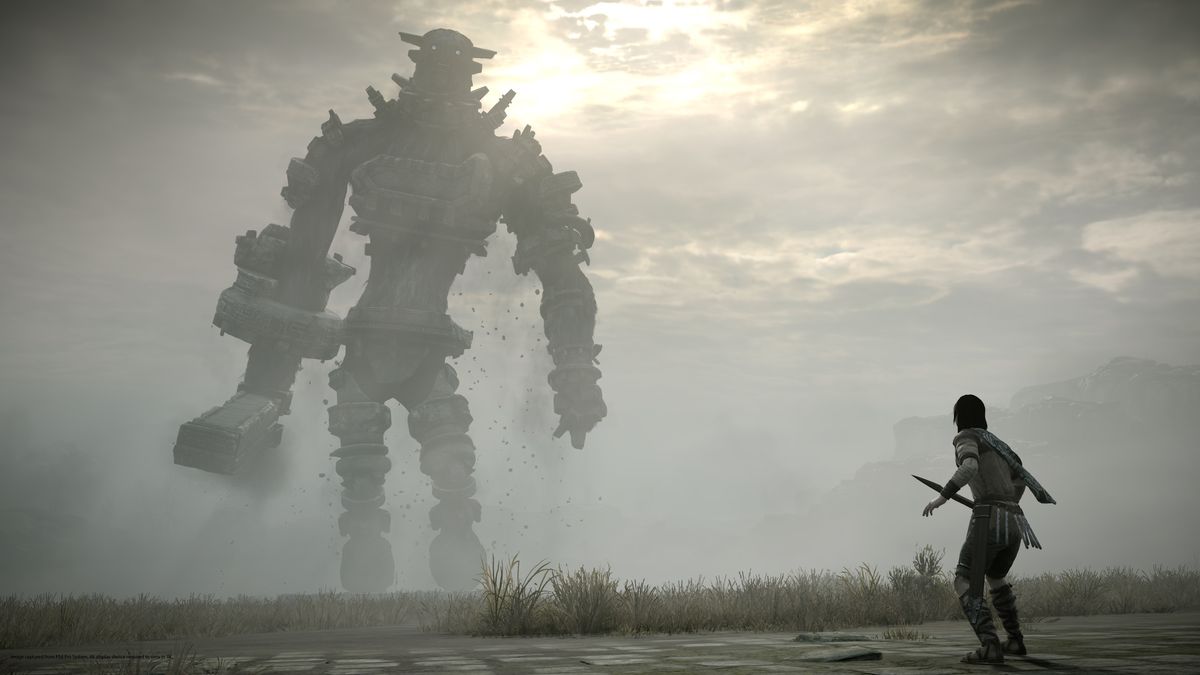 Beasts as big as the sky, none are friends, all are foe.

Shadow of the Colossus is in the same vein as ICO an was a benchmark release for the PlayStation 2 in 2005.

The title had one slight makeover on PlayStation 3, being a budled single disc release with the aforementioned ICO.

A game that has not aged in it’s gameplay, the ever expansive free roam adventure that is Shadow of the Colossus has been remastered for PlayStation 4.

If you never got to experience the PlayStation 2 version or the re-release on PlayStation 3, Shadow of the Colossus is a game that quite possibly you would never have played before.

Truly a piece of interactive art. 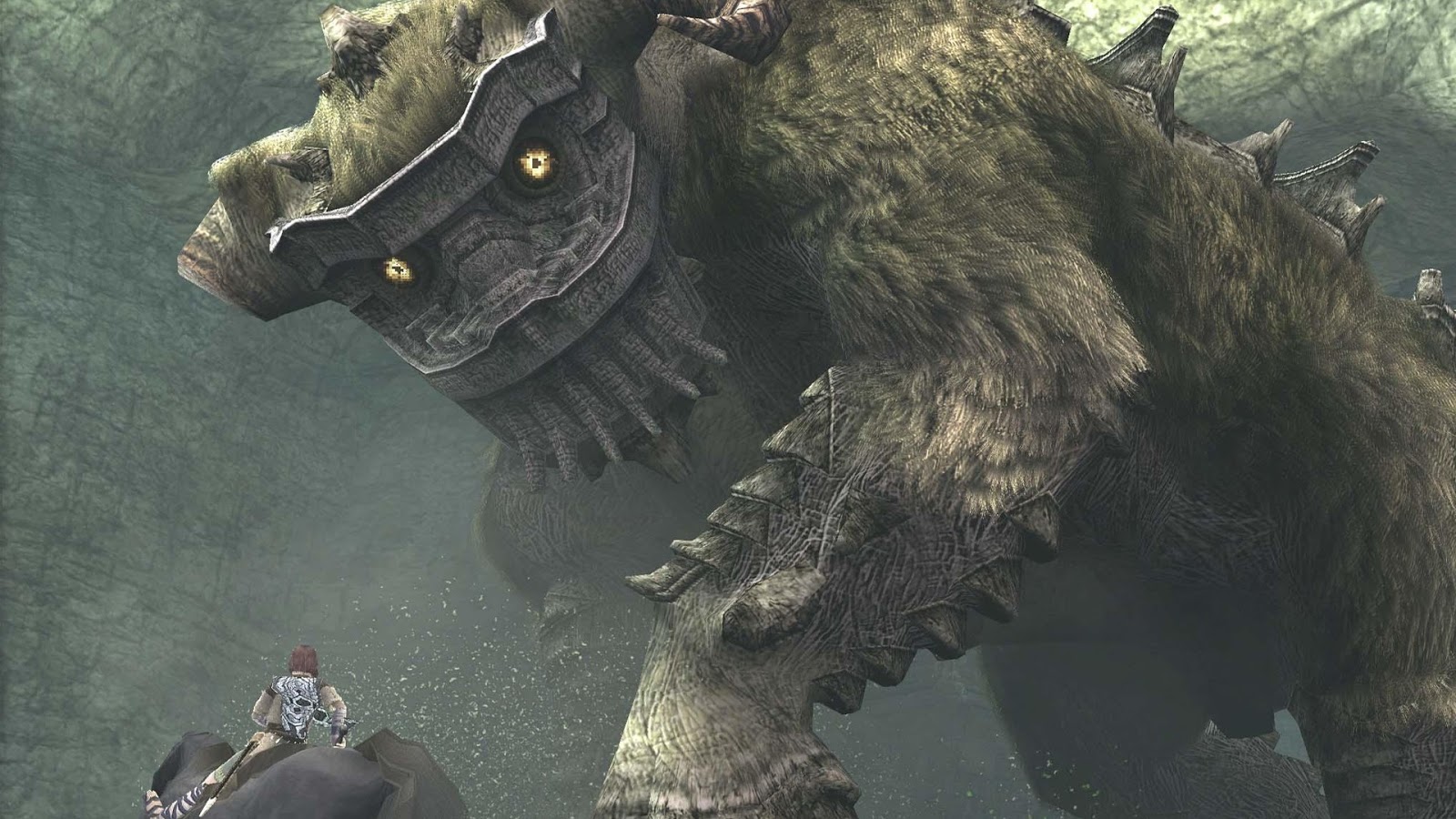 From the creators of ICO, (released on PlayStation 2 in 2001), Shadow is a prquel, and not a terribly hard game to sum up. As a lone boy warrior you explore a vast, largely deserted landscape searching for 16 varied giant beasts known as ‘Colossi’, at the instruction of a disembodied god-like voice.

The game starts in a temple where your character arrives to emotionally place a dead girl on a stone hearth. Surrounding the great hall in this lavishly detailed temple are 16 statues.

The boy pleads with the booming voice for instructions on how to bring the lass back to life. It is here that you learn that these statues are not just intricate works of stone but something more sinister, that entrap the land and wield an evil dominance. By destroying these monuments of evil the girl will be given back her life and your destiny will become clearer, but in order to see them crumble the Colossi must be killed.

It is these, not human, part animal and part mechanical and stone looking giants that steal the game.

You have a bow and arrow and a magical sword as your defense and a trusty steed that you ride and call upon to get you across the endless environment. 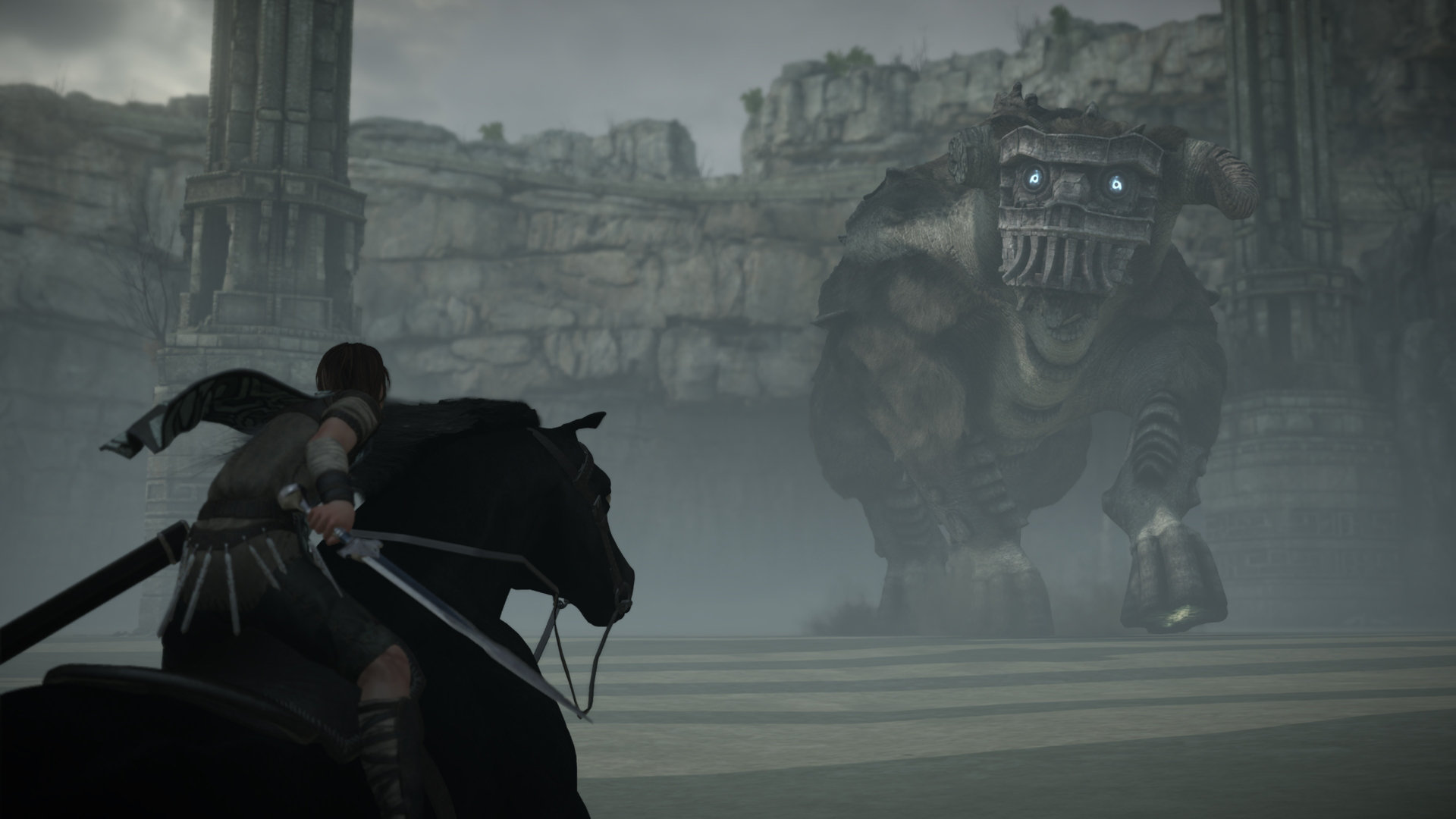 To find out where to go next you must hold your sword up to the light and go in the direction of the beam. Your controller will buzz as you head in the right direction, but when you are close to the point that the beam has lead you in, be careful, for as huge as these beings are, they slowly stomp out from the mist and will be upon you before you know it.

The fun really begins then.

These beasts while big and slow are not dumb and will see or sense you, and do not wish to stop and make friends. They will try and stand on you or pummel you with their boulder like weapons, while it is your aim to climb these moving bulldozers thrusting your sword into ‘hot-spots’ and leaping from the torso onto the wildly flailing arm then up further until you reach the head, like riding a moving building. 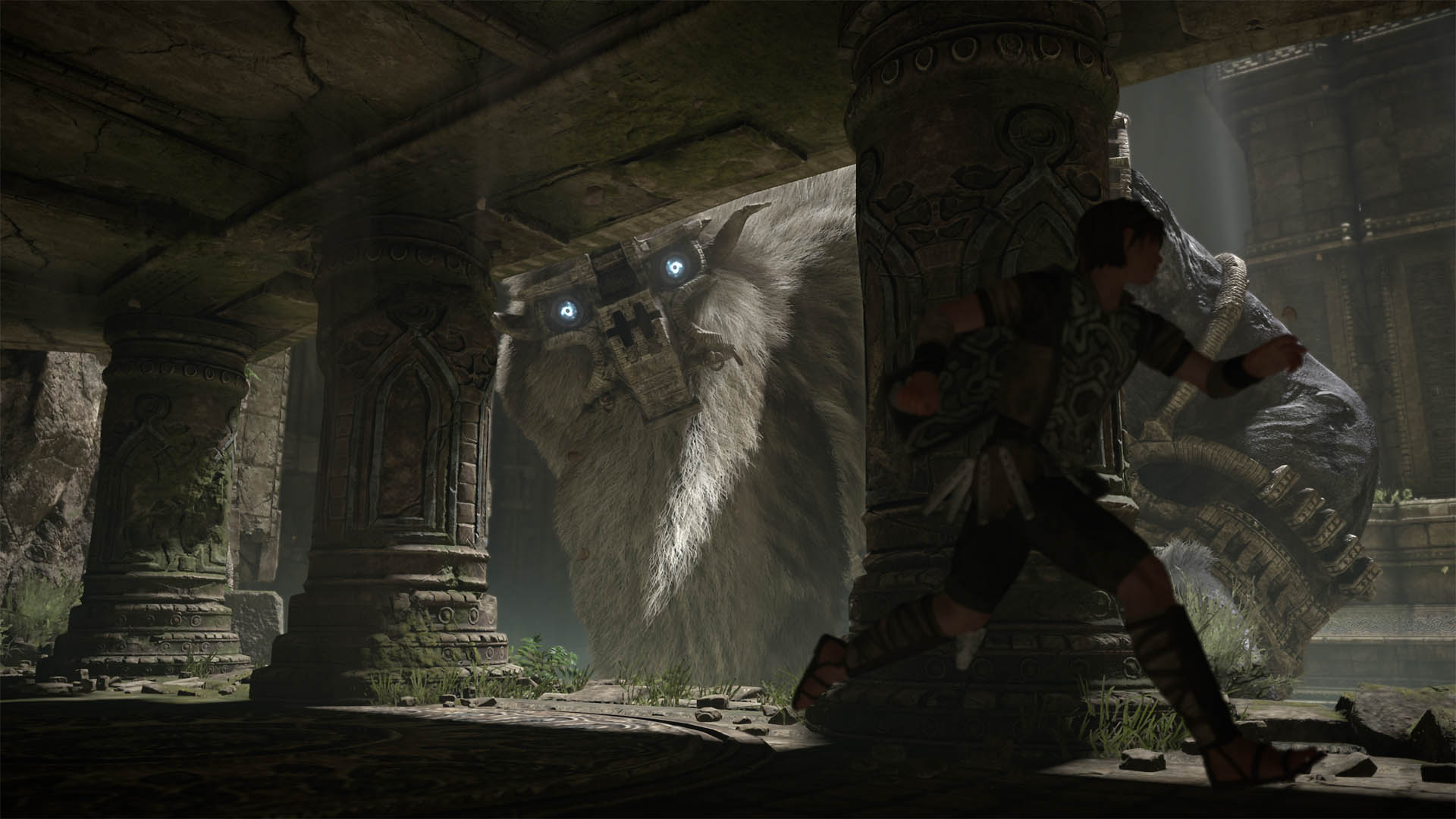 Precariously perched and constantly losing footing, as the Colossi will shake and jerk to ensure that you do not complete your goal, you must thrust your sword into its head several times, releasing the dark light until the entity falls to the ground like the skyscraper it is. You do not only defeat them, you must figure out how to do so at the same time.

Then it’s back to the temple to check on the girl and onto another mission. The girl will have some degree of life restored to her with every Colossus that you destroy. Her fingers may twitch, her eye lids might flutter, all signs that keep you going into seemingly the impossible. The Colossi are conquered in a set pattern. You will never accidentally stumble across one; all are predetermined by the story.

As an adventure game goes, it is basic, but it suits its simplicity. 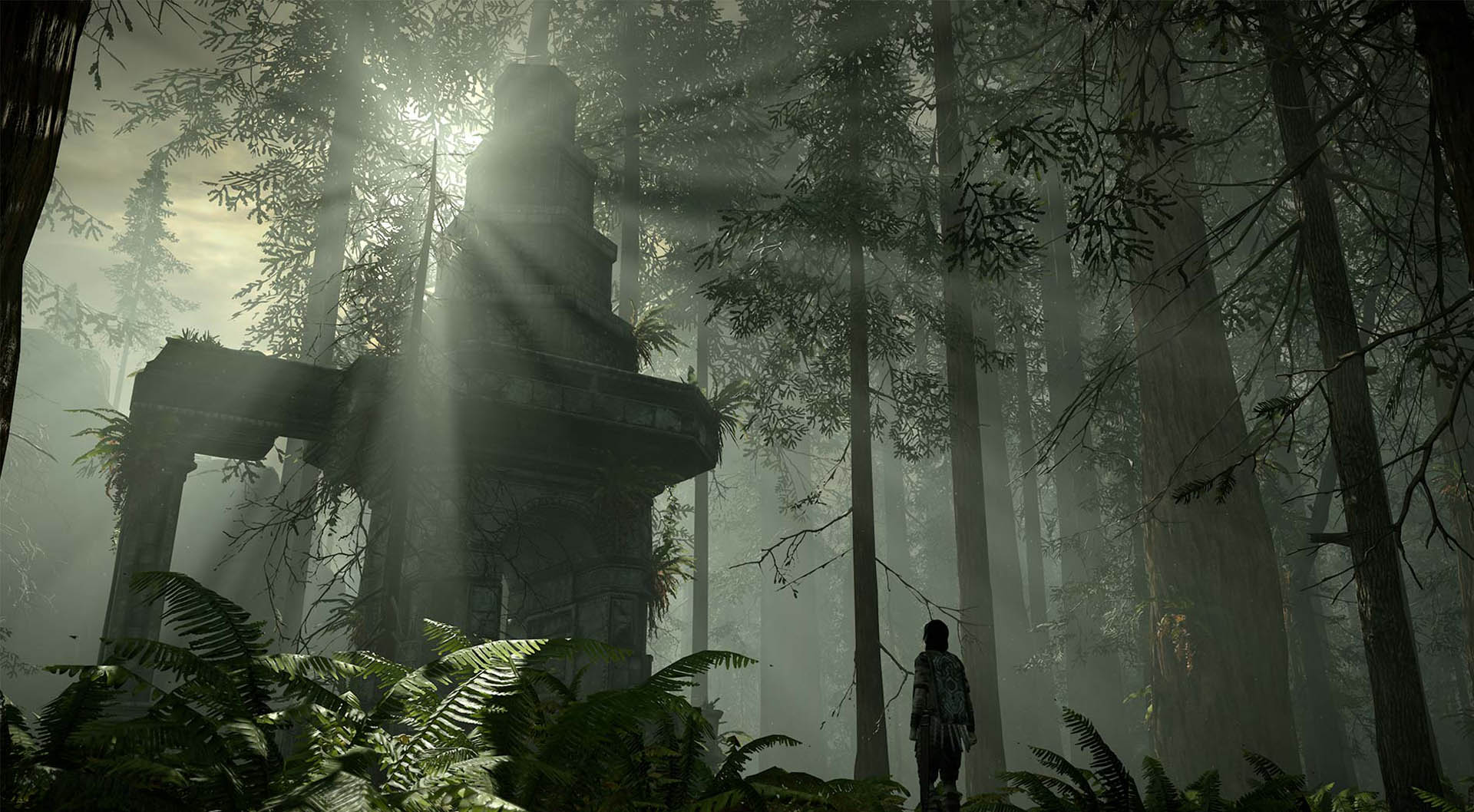 The lands are a lonely place and to keep the game as simple as possible while retaining the splendour of the Colossi the designers have not littered the countryside with wanton monsters or collectables. While you maybe keen to jump off your horse and look around there is nothing to find, it is just business, take out a Colossi and then another. The boy has basic skills, climbing, a pathetic jumping ability and throughout play your acrobatics and puzzle solving will be tested. Your character has a stamina gauge and a health bar that will regenerate after time. The physics of the horse are truly realistic and you can feel it as you play. You have a combination of speeds, by gently kicking the horse it will go from a stumbling dawdle to a gallop in no time.

You can lie yourself flat on the horse so that wind does not become a restriction and maintain speed. Getting around this game could only be done on horse back as there is no possible way to get from one Colossi infested area to another in ample time, the environment is that spread, and ultimately endless and eerie.

The designers of Shadow actually went out and rode on horses in order to get the true logistics and physics into the game. 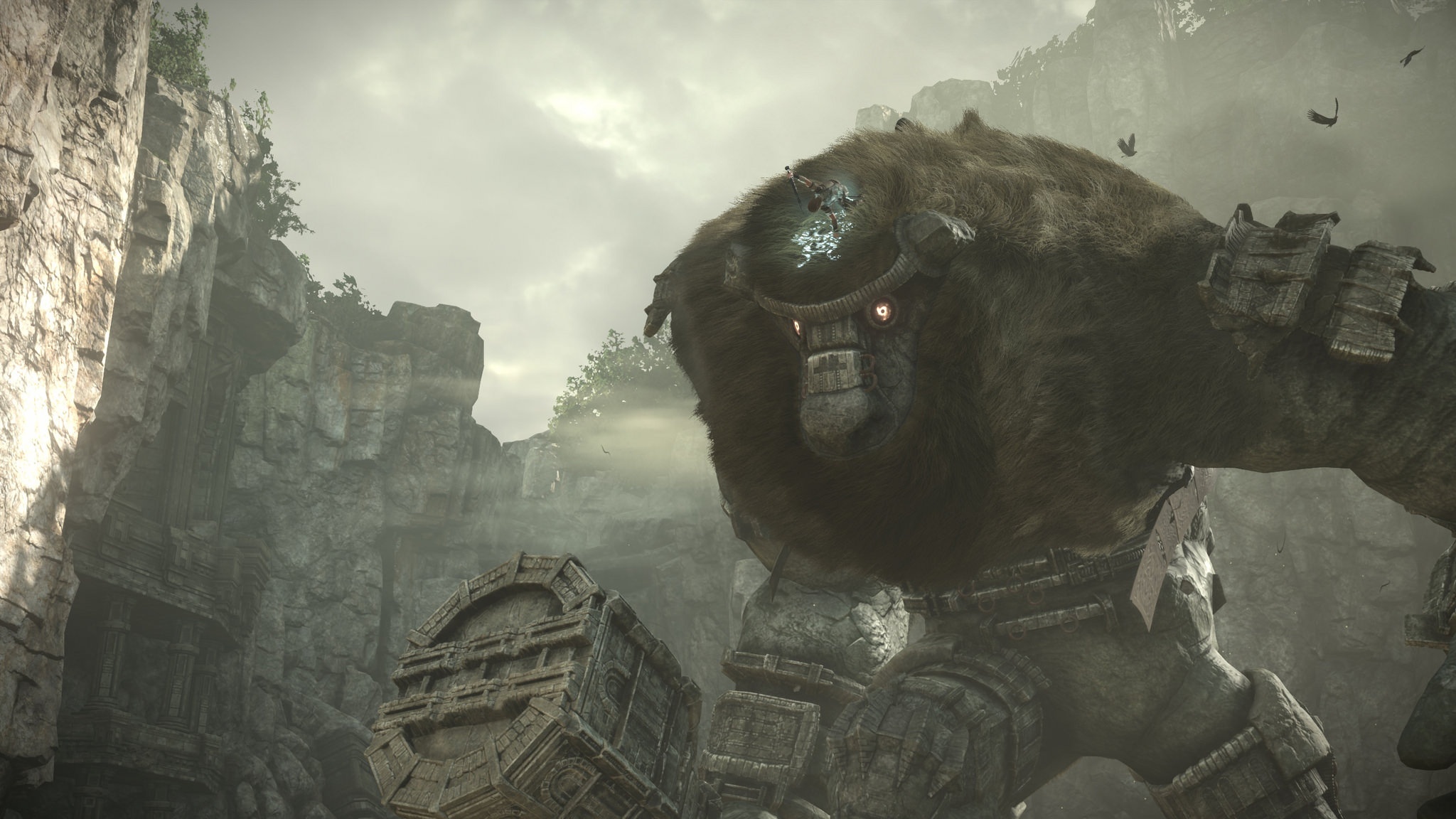 While vast landscapes may sound tedious, there is always something for the eyes. The attention to detail is beyond a game released yet, and has everything from rocky canyons, falling bridges, mountain terrain, caverns and wild greenery. Graphically it is a mix of highly rendered anime and cinematic camera work.

The game aims to play on your senses and emotions and engross you into the story, a story you really are only a witness to. As game designer, Ueda San has said; ‘…we feel it is a special, deeply personal experience – cinematic in scale but at the same time delivering the emotional and immersive experience…’

The Remastered version not only has re-worked cinematics and a 4K makeover, it has been rebuilt from the ground up, specifically for PlayStation 4 Pro.

There is a saying that the bigger they are, the harder they fall. Shadow of the Colossus is still a niche game that has inspired present day titles and has proved that it is never likely to fall. 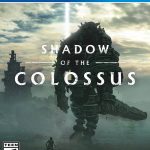