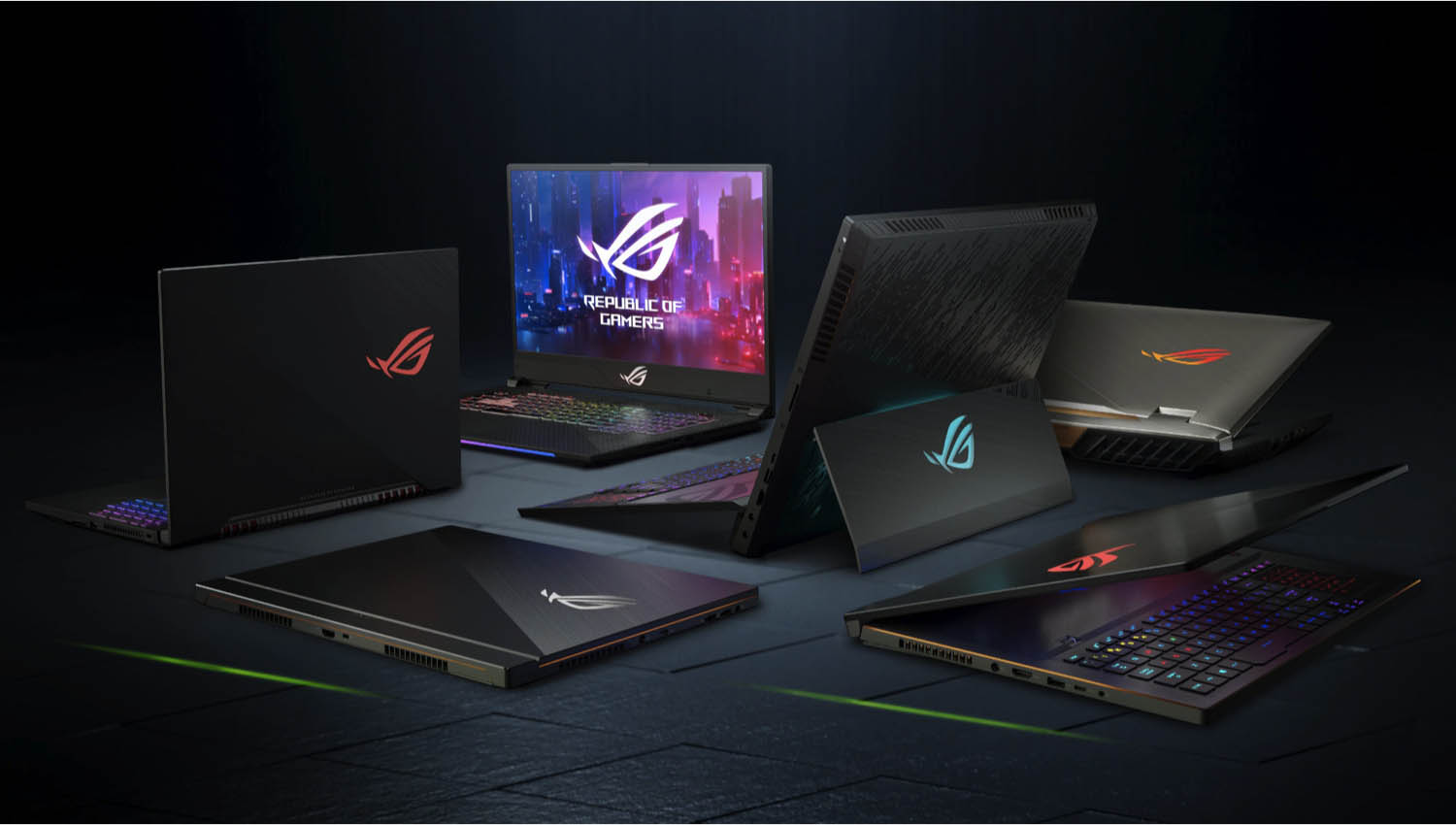 This full top-to-bottom lineup is filled with updates that elevate your portable PC gaming experience across a diverse family of form factors from the ultra-slim Zephyrus S to the musclebound G703.

After raising the bar for desktop gaming performance and visual quality, the NVIDIA GeForce RTX 20-series is poised to do the same for laptops. The new Turing architecture is going mobile, and Republic of Gamers has a diverse lineup to meet any gamer’s needs. More than just vehicles for the latest GPU, ROG’s NVIDIA GeForce RTX lineup showcases their commitment to enhancing every aspect of gaming laptops. It’s filled with incredibly fast displays framed by amazingly slim bezels, amplifying immersion to draw you deeper into your favorite games. Advanced cooling ensures maximum performance with minimal acoustics and lets you choose between system profiles tuned for different scenarios.

Add cutting-edge components and exclusive ROG features, and you have the right foundation for a full family that stands apart from the rest. 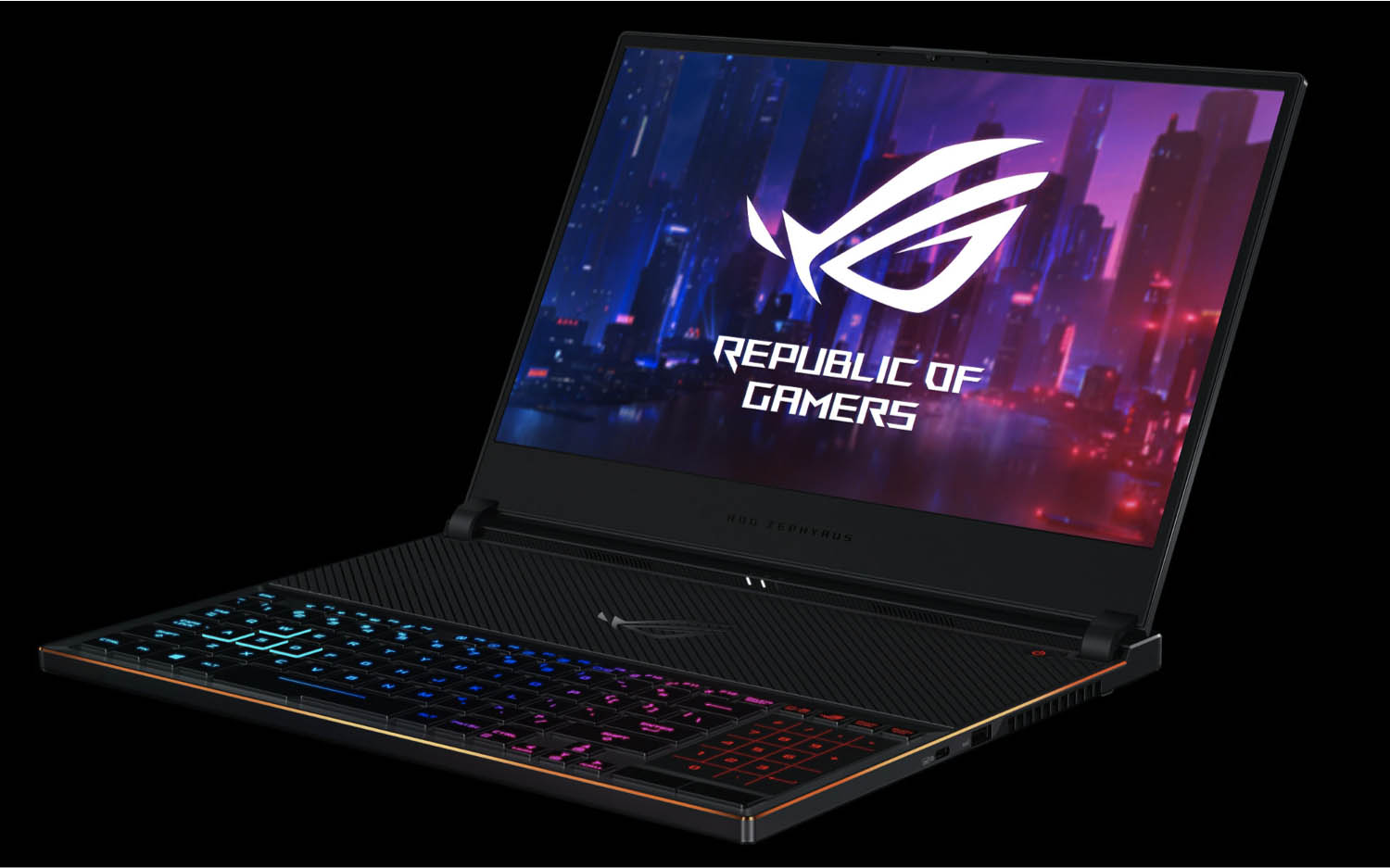 Gamers have different priorities, so our laptops follow suit. The desktop replacement emphasizes performance over portability with a traditional clamshell in the ROG G703. It is joined by the ultra-slim ROG Zephyrus S GX531 that’s augmented to go beyond gaming. The ROG Strix SCAR II and Hero II reprise their roles in the eSports arena with portable form factors filled with competition-grade hardware.

The ROG G703 carries the torch for desktop replacement clamshells, while the just introduced ROG Mothership represents the future, the ROG G703 takes the present into the next generation. It is powered by 8th Generation Intel Core processors with an optional factory overclocked Intel Core i9-8950HK processor for speeds of up to 4.8GHz. Sticking to a traditional 17” laptop form factor requires beefier cooling and a thicker chassis to achieve the same performance as its deep-breathing sibling. The larger heatsinks and fans are so effective that the G703 can keep up despite
having much less room to breathe. 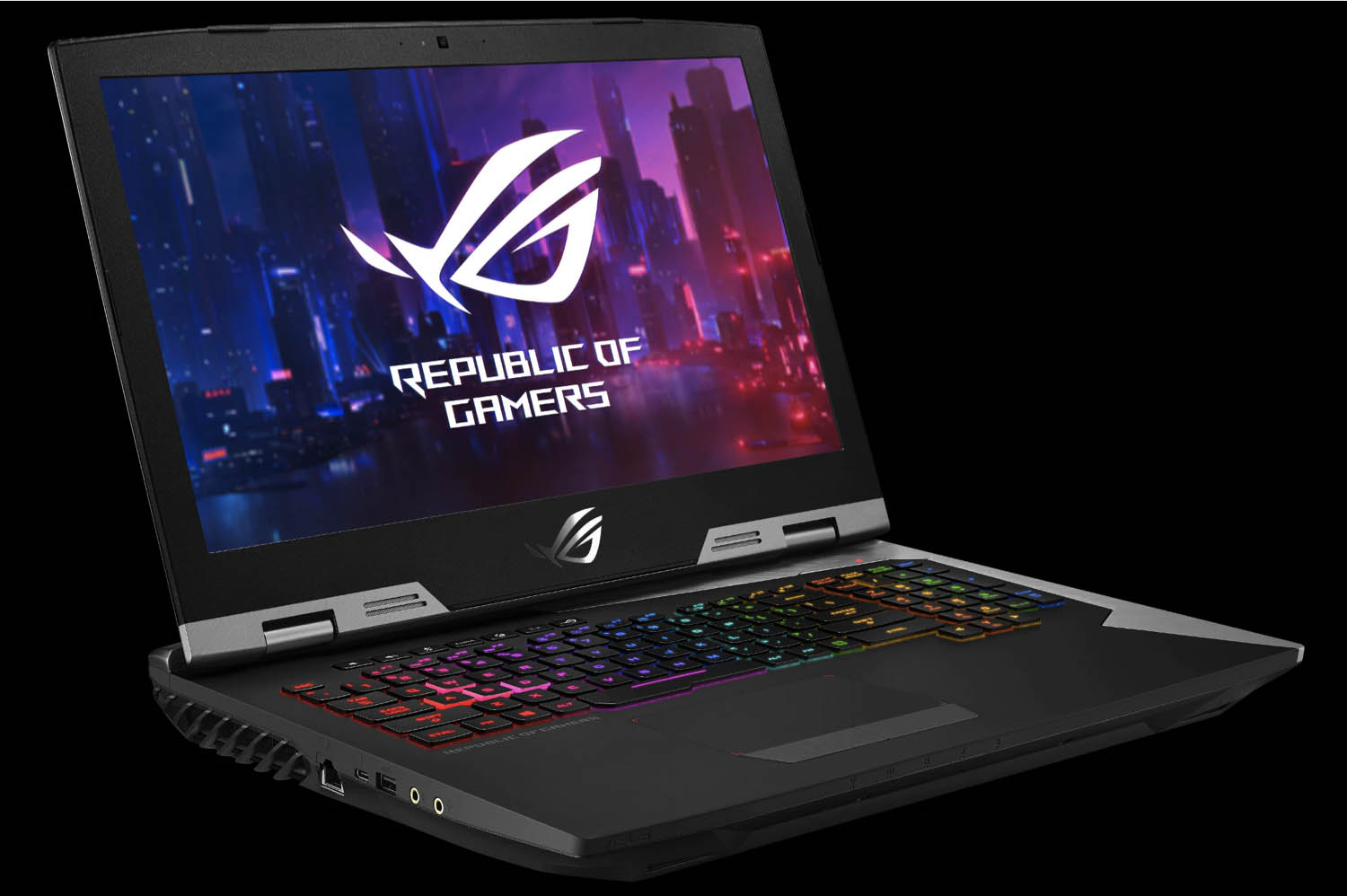 Sticking to a familiar design imparts a different sort of versatility. The ROG G703 can sit on your lap in a pinch, which for some will mean the difference between making and missing a deadline, especially when on location or on the road. Despite being rooted in tradition, the G703 still incorporates the latest technology and features to ride the cutting edge.

The ROG Zephyrus S GX531 sets the standard for slimness. Putting high-end gaming components into an ultra-slim laptop is exceedingly difficult, especially when targeting a thinner chassis than ever before, but the Zephyrus S GX531 delivers with a remarkably compact body that’s a testament to ROG’s engineering prowess. The slender exterior measures nearly 15mm thin and leverages a 15.6” display with super-narrow bezels to squeeze into a smaller footprint, so you can easily stuff the system into bags made for laptops with much less power. 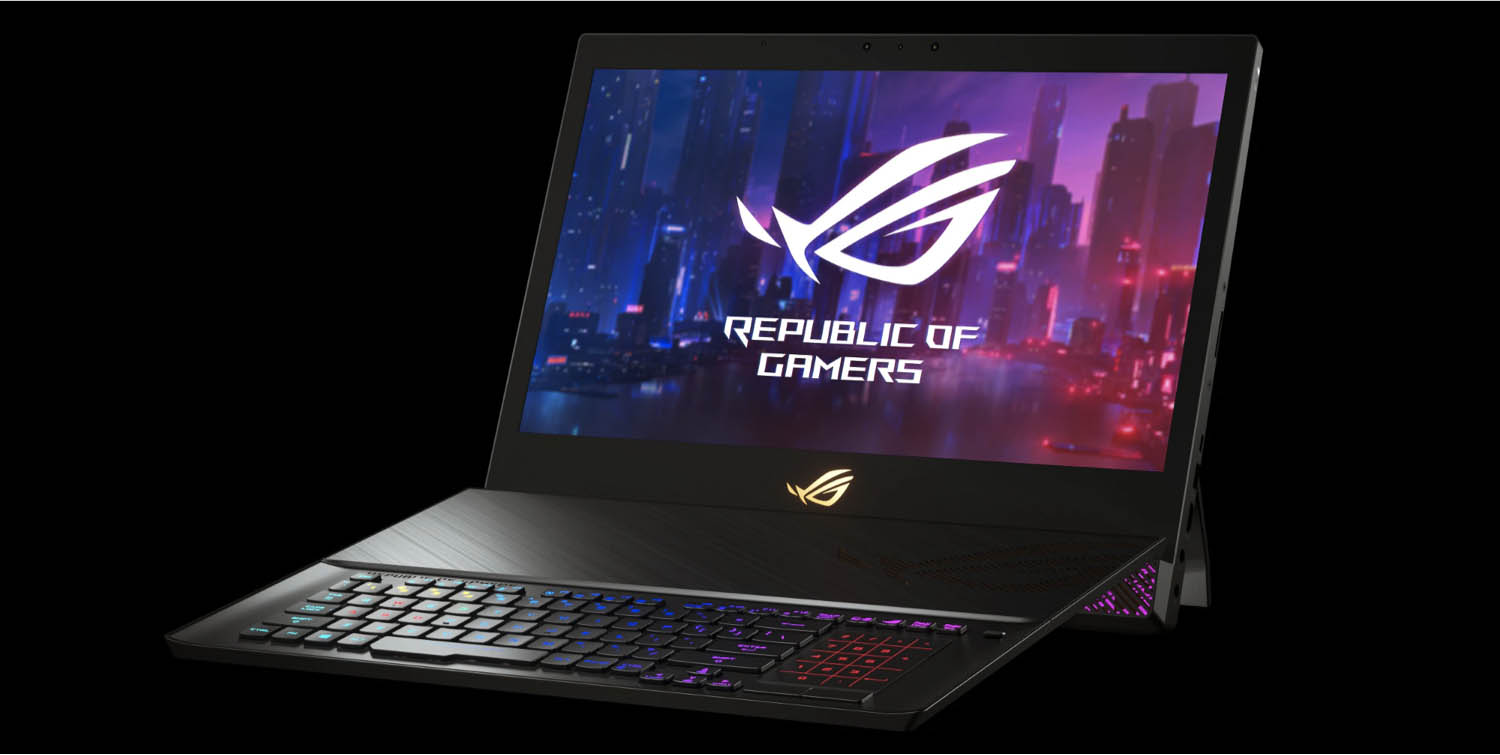 The ROG Zephyrus S GX531 lowers its profile without scaling back on specifications. You get cutting edge parts like the latest Intel Core i7-8750H CPU, a premium 144Hz refresh rate display plus all the ROG essentials. They are just squeezed into a slimmer package that lacks some of the extras available in the new compact 17” ROG Zephyrus S GX701. That makes the smaller Zephyrus S a more focused alternative for people who prioritize portability above everything else.

Split the difference with ROG Strix laptops for different genres ROG Strix occupies a more mainstream middle ground between beast-like desktop replacements and premium ultra-slim gaming laptops. The Strix form factor melds performance and portability with distinctive designs that stand out from the masses. At the same time, its super-narrow bezels blend in seamlessly, making it easier to get involved in the action on screen.

Your hands will feel right at home on the desktop-style keyboard, which is augmented by dedicated shortcut keys for volume, mute, and Armoury Crate. Enhanced lighting spreads an illuminated glow beyond the deck and onto not only the ROG logo on the lid, but also a diffused strip that runs across the front edge of the laptop. Addressable as two separate zones, this light bar casts an Aura Sync glow into your environment and offers a multitude of customization options. 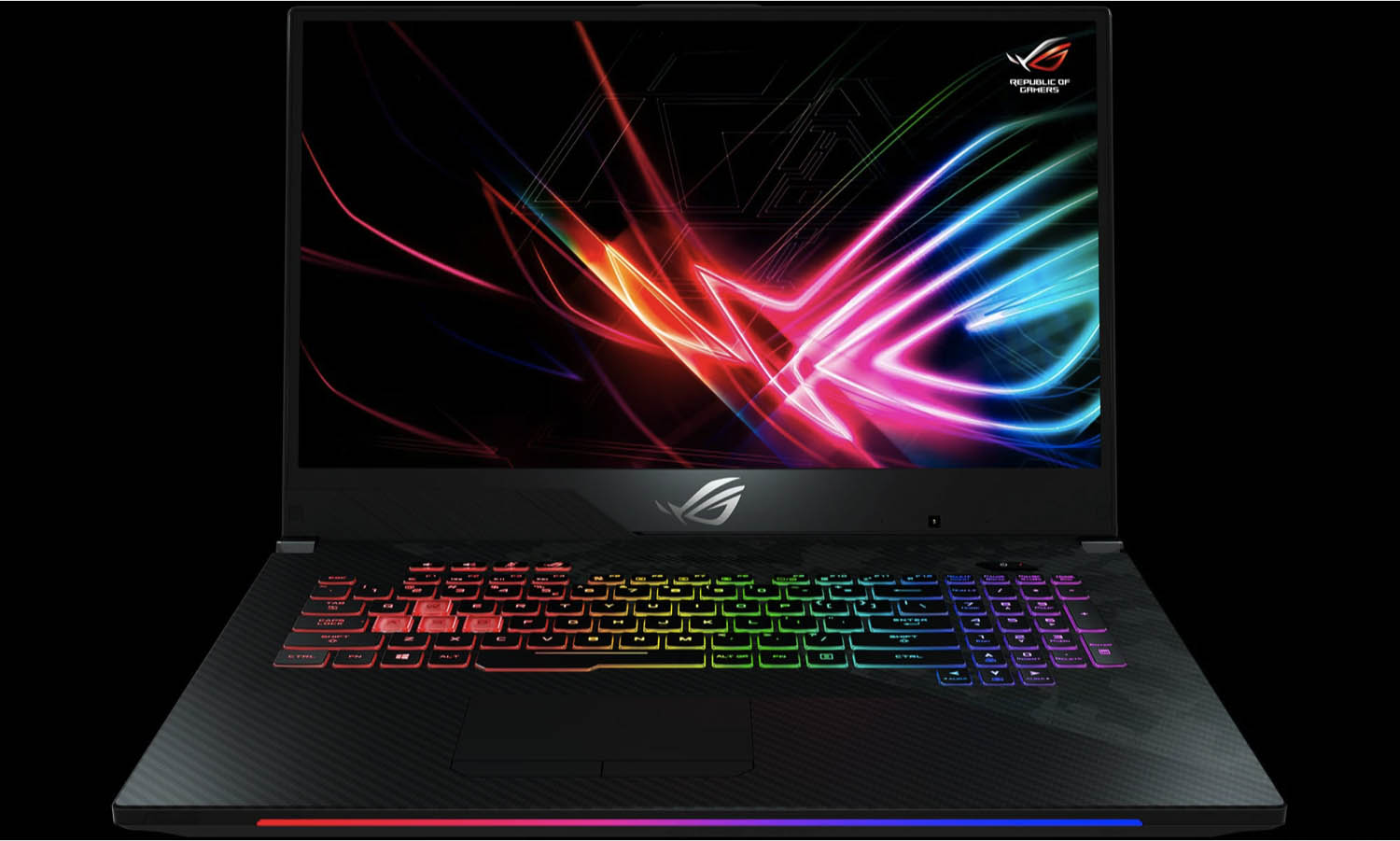 Designed to hit the sweet spot, the latest ROG Strix gaming laptops are available with six-core Intel Core i7-8750H processors backed by up to 32GB of RAM. They combine speedy solid-state system drives with a terabyte of additional mechanical capacity that provides loads of space for larger game libraries. The auxiliary hard drive can also be swapped for a faster SSHD that caches frequently accessed data to accelerate load times.

Set up for shooters with the ROG Strix SCAR II. Built for the FPS side of the esports arena, the ROG Strix SCAR II comes in 15.6” and 17.3” flavors available with the same 144Hz refresh rate and 3ms response time. Both versions are draped in a shooter-inspired motif that uses splashes of camouflage to create a unique aesthetic fit for the battlefield. 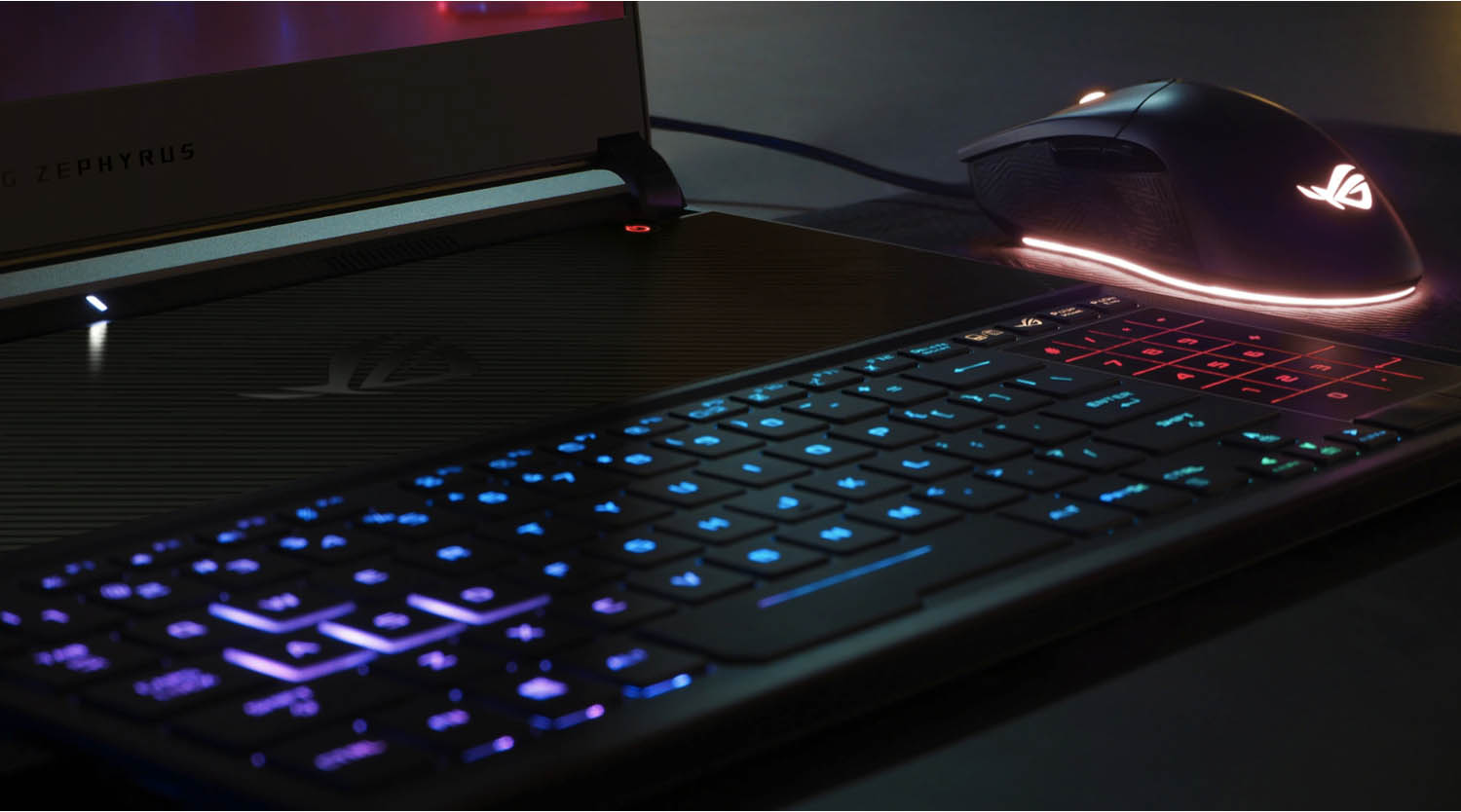 The ROG Strix Hero II is optimized for MOBAs and ideal for gamers who want subtler styling. Its contrasting textures and cyber-text patterns are more restrained than the aggressive aesthetic of the SCAR II, making the Hero II more approachable for wider audiences. Instead of highlighting the WASD cluster, translucent key caps impart an extra glow to the QWER row.

The Hero is available exclusively with the GeForce RTX 2060 GPU that is more than up to the task of pushing high frame rates in MOBAs and other popular games. Like with the SCAR II, NVIDIA Optimus technology conserves power by only activating the discrete GPU when needed, so you get longer battery life day to day and better gaming performance on demand.

Varied form factors and specifications help the new family of ROG GeForce RTX gaming laptops appeal to a broad range of gamers and power users with different needs and budgets. There’s something for everyone, whether you live for gaming or want a single system that can mix work and play without sacrificing the experience for either one.