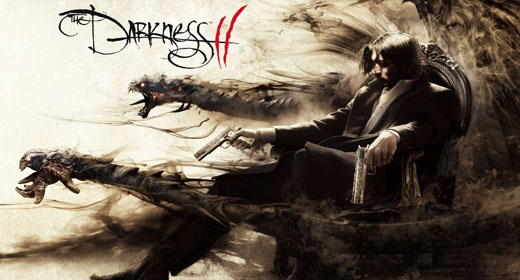 Let The Darkness embrace you one more time.

In the two years that have passed since the first game (The Darkness released in 2007) Jackie Estacado is now the boss of the Franchetti crime family, having the ability to better control and temperament his supernatural forces that he ‘inherited’.

Although life is good, he is still plagued by the death of his girlfriend all those years ago and it’s at a dinner meeting with his Mob that all hell breaks loose. 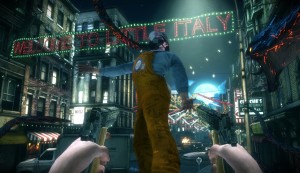 Jackie and his friends are besieged by a rival faction who litters the restaurant you are in with gun fire and flames.

Your closest associate get’s you out, but not without injury.

The fight ensues over to a subway, where The Darkness begins beckoning to Jackie to release it…

The only way to survive is to wield The Darkness one more time.

A vision of Jenny, his girlfriend prompts him to go after her, and into the path of an oncoming train…

You awake in a psychiatric ward, where members of your ‘Family’ are patients, Doctors and Nurses within the Asylum. Is this reality? Is your life as a ‘Made Man’ a dream? Is The Darkness really just a figment of your psychosis?

It is here that you speak with one of your guys, a wiseguy called Johnny. He calls for you to find him.

Then, there you are, back with The 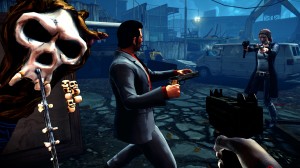 Darkness, in the cold city streets with rival mob members baiting for your blood.

You will soon learn of a mysterious ‘Brotherhood’ and what that means for your reign over The Darkness.

The first person gameplay is a full on blood and carnage supernatural thriller.

Making use of every single button the control pad has you control The Darkness’ tentacle/snake like movements, where you can pick up objects littered about your environment and use them as a weapon, or a car door as a shield, throwing it towards an opponent, usually slicing them in some glorious gory way.

Use the Darkness to pick up an enemy and get your own bloodlust flowing by tearing them apart.

Combat abilities have been cranked up a few thousand notches with ‘quad wielding’. This means that you can use two firearms and The Darkness simultaneously. Making you a force to be reckoned with.

Light will hamper your vision and very quickly, your playing skills. If Jackie is near any light source you must take out that source or avoid it where possible. 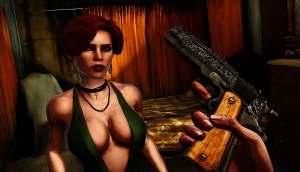 The dead are oozing with life essence, once they have dropped to the ground. Collect all that you can – you will use these as a currency for recharging health powers and so forth.

You are accompanied by a Darkling, apart of your subconscious

Slightly cell shaded and the deeper side of blackness is the eye candy before you.

A secondary mode of play called ‘Vendettas’ can be played alongside the main campaign, whereby you take on the role of one of a handful of henchmen, out to retrieve ‘Darkness’ relics from the Brotherhood. This mode extends the gameplay and it is definitely within your interests to give it a go. Both offline and online.

A story that could easily be apart of a high budget movie, gameplay that severely tests your coordination abilities; The Darkness II is one to own of those released this year.