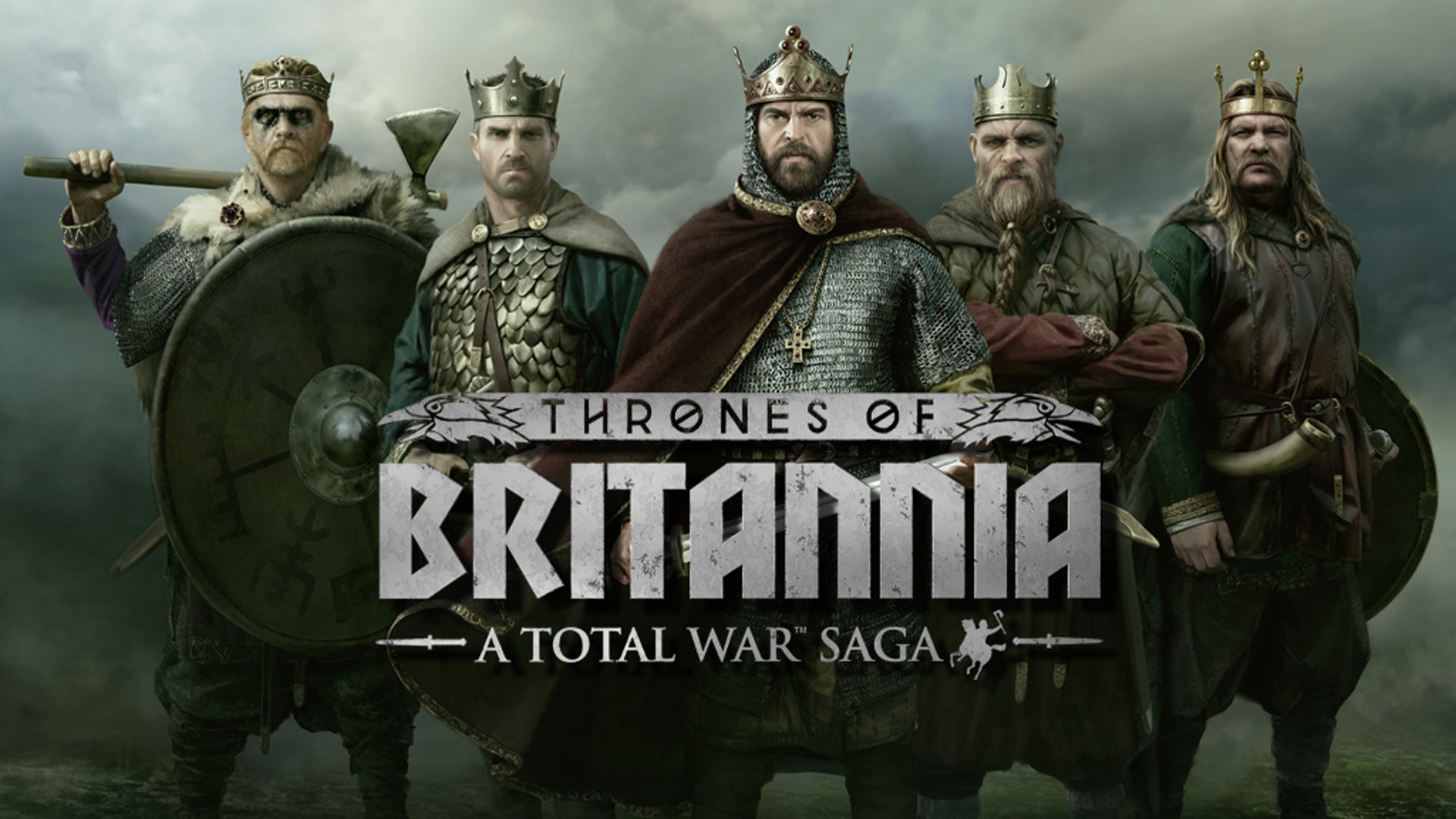 Creative Assembly takes a trip to Ancient Britain in a spin-off of their award winning Total War series.

Set in 878AD, Thrones of Britannia: A Total War Saga covers a period of internal turmoil as Alfred the Great seeks to unify the kingdoms of Britannia. As if finding common ground amongst the English, Welsh and Gaelic people wasn’t enough, the even-present Vikings place a further threat to unification.

This is not the first time that UK outfit, Creative Assembly have offered up a more intimate version of their famed wargaming franchise. They’ve been doing it for years, but usually as an offshoot from one of their main titles. In the past we’ve had Alexander and Rise of the Samurai, both offering more personal variations on the series’ trusted formula. 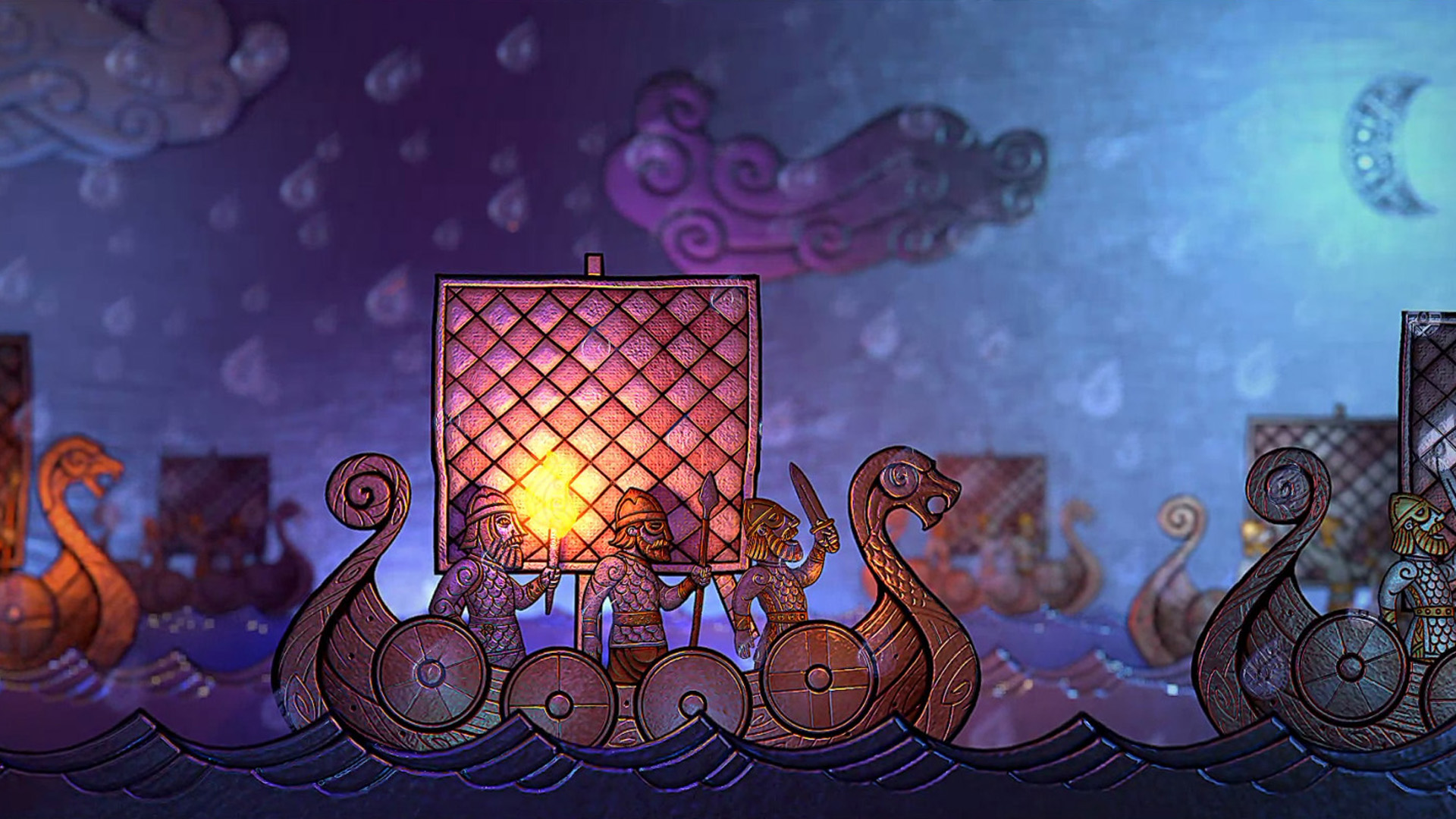 Thrones of Britannia: A Total War Saga allows the developers to tell a tale over a much smaller, but more detailed campaign map. Compared to the map of the UK in Total War: Attila, Britannia’s sceptred isle is 23x bigger. It is not only bigger, it’s also very detailed, mimicking the topography of the British Isles of the time. In my home county of Kent (Cant in the time period of the game), the Isle of Thanet is still an island, which it isn’t today.

Britannia is also a welcome return to the series’ historical roots, after two Total War titles set in the fantasy world of Games Workshop’s Warhammer.

The game is based around the technology employed in Attila, but unlike Attila, Britannia isn’t about a huge army ransacking everything in it’s wake. Britannia picks things up after the Viking invasion with a divided Britain full of factions all vying to take control. 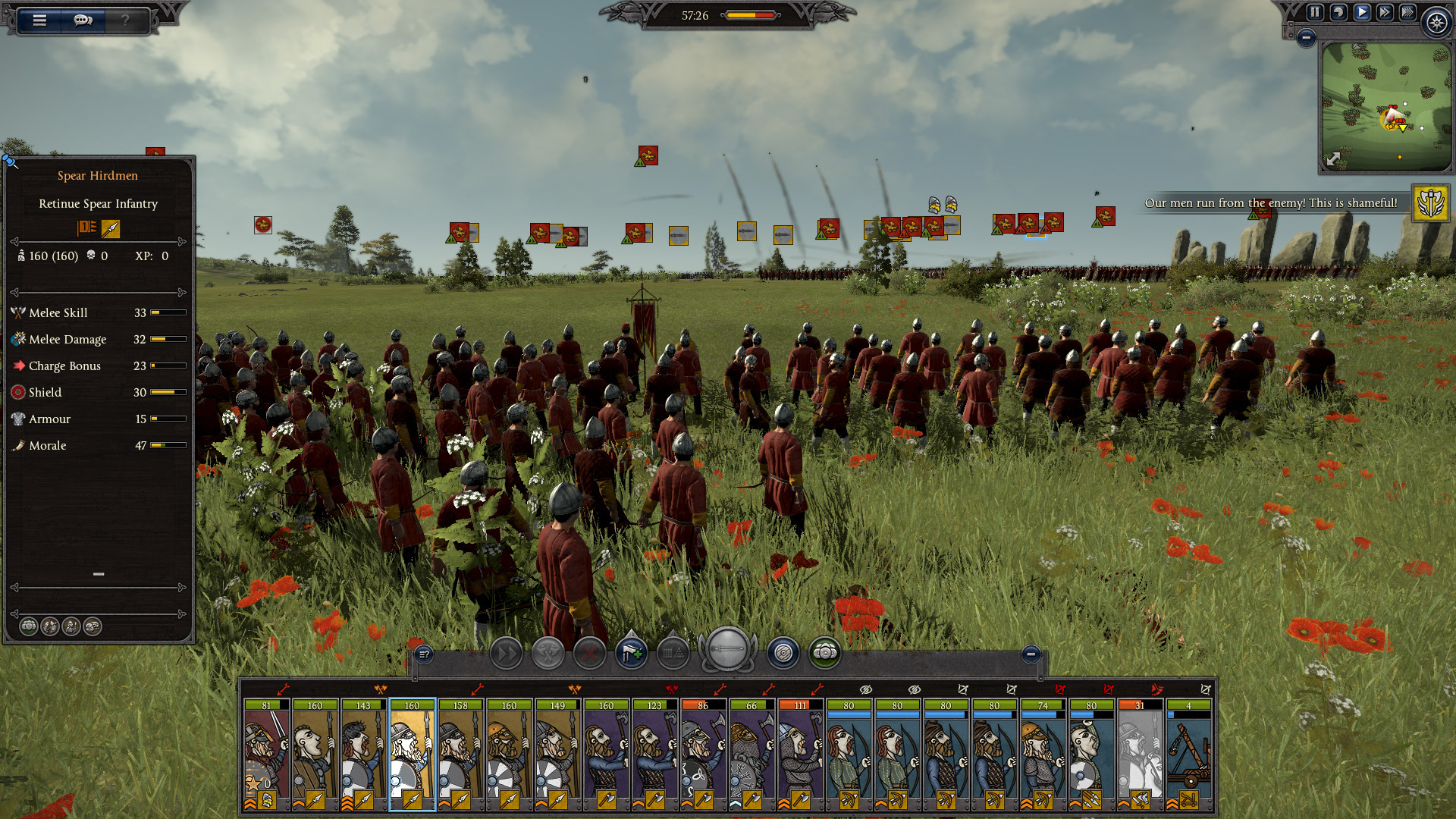 The game features five cultures split into ten factions, each with their own traits, benefits and weaknesses.

If you’ve played a Total War game before, you are likely going to be right at home with Britannia, at least the combat side of things. Total War campaigns are played at two levels.

On the Campaign map, which in this case in the whole of the British Isles and Ireland, players can manage settlements and command troops. Britannia seems to assume that you are very familiar with this turn-based strategy element of the game. Whereby in previous offerings the in-game advisor almost nagged you with tips and advice, this time out she is rather muted. Advise is often cryptic and more frustrating than helpful. 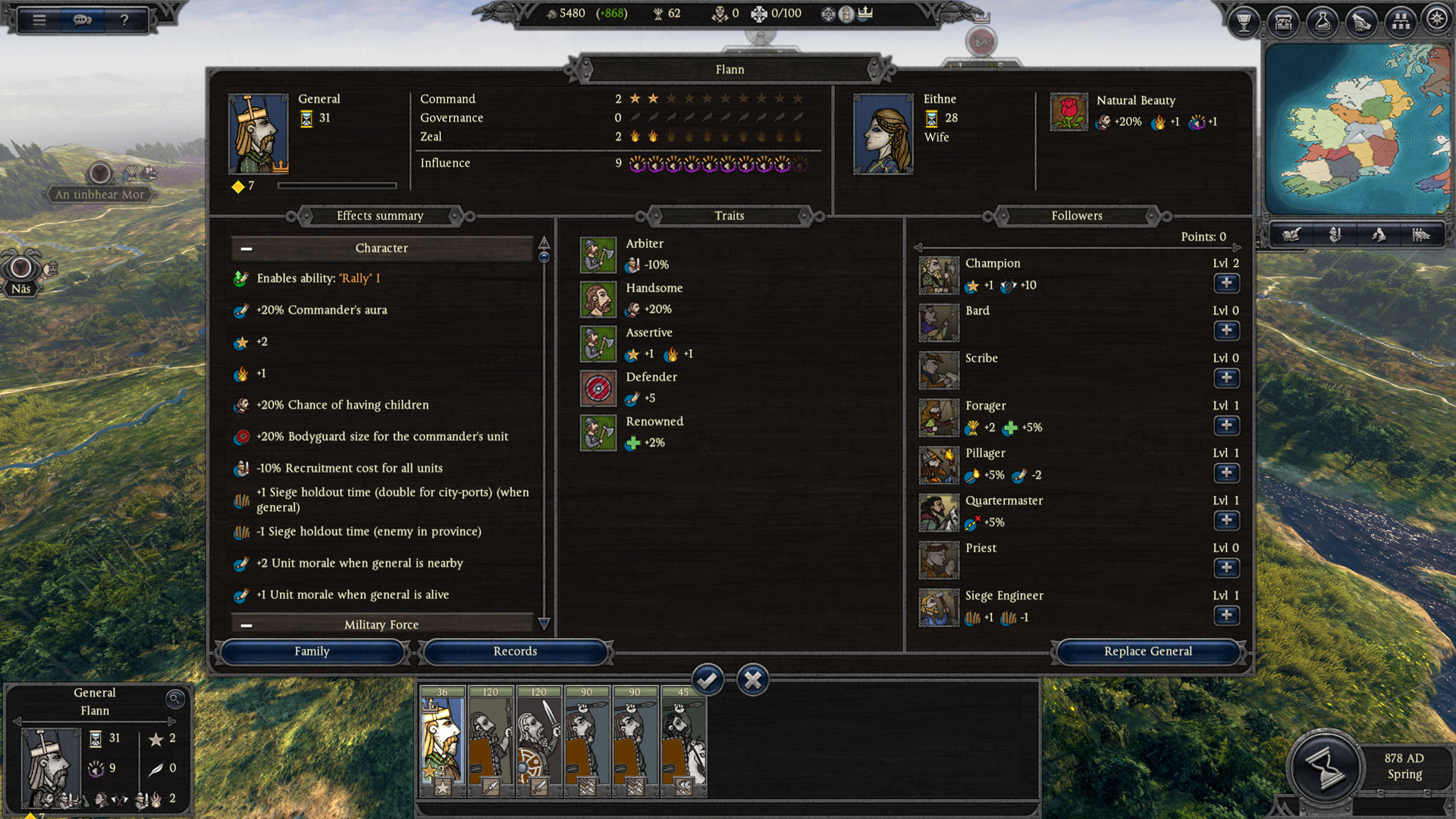 The cut-throat political skulduggery of your opponents means that you need to pay attention to a map that is quite cluttered. Many aspects of the game are hidden amongst various menu and information panels give the game, which is supposed to be more streamlined experience, a greater learning curve than I expected.

The turn-based element focuses on keeping your lineage going, your generals loyal, your allies happy and your coffers and granaries full. Failing to juggle all these balls will result in a struggle to maintain the power you have, without even thinking of exerting your will on new territories.

The emphasis is on properly managing your realm, rather than amassing the largest army. Large armies need feeding and are led by ambitious generals that’ll rise up against you if you don’t look after them. My first game was a disaster ending with my faction being crushed by enemies of my own making- a result of poor decisions in the early game. 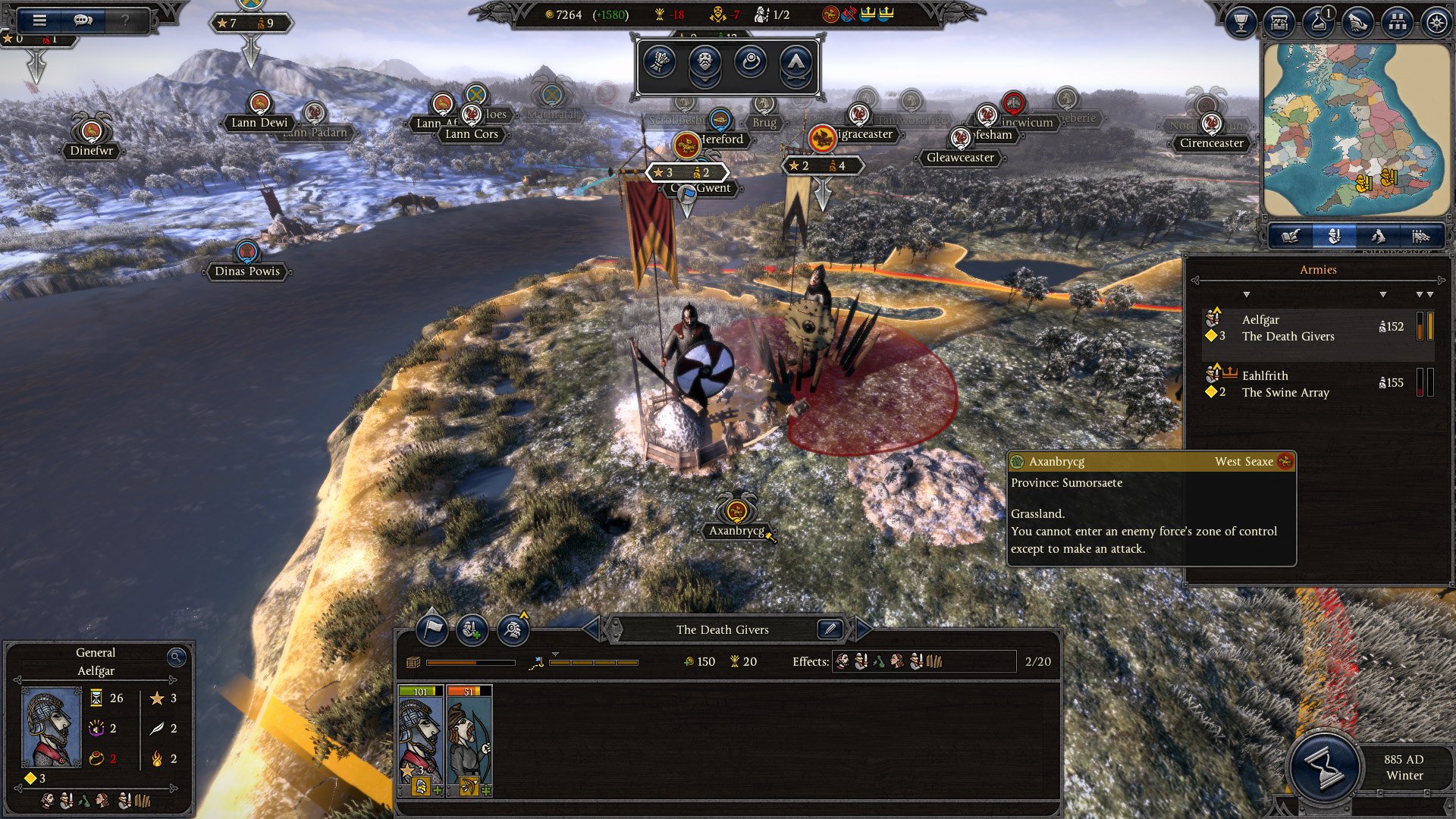 Creating and maintaining experienced armies commanded by sound generals takes time and effort. This gives confrontations a bit more jeopardy that in previous games whereby you may quickly assemble armies using might over cunning to win.

The real-time strategy side of the game departs very little from the tried and tested battles of previous games. You command units of different types: cavalry, archers, swordsmen etc., as well as your general’s elite units. The battlefields are diverse, featuring different terrain and vegetation. The settlements look absolutely glorious.

The main difference between the real-time element in this game and previous entries is the upgraded visuals which were never shabby, but for Britannia, look even more realistic. There’s no blood, though, meaning I’ll probably have to splash out on the DLC blood patch (really Creative Assembly, again?).

One of the big annoyances with Total War games is that they are a premium DLC bonanza for Sega and Creative Assembly. If you want the full Britannia experience expect, over the coming months, to spend a fair amount of cash on DLC. Saying than, the game comes with hours and hours of gameplay. 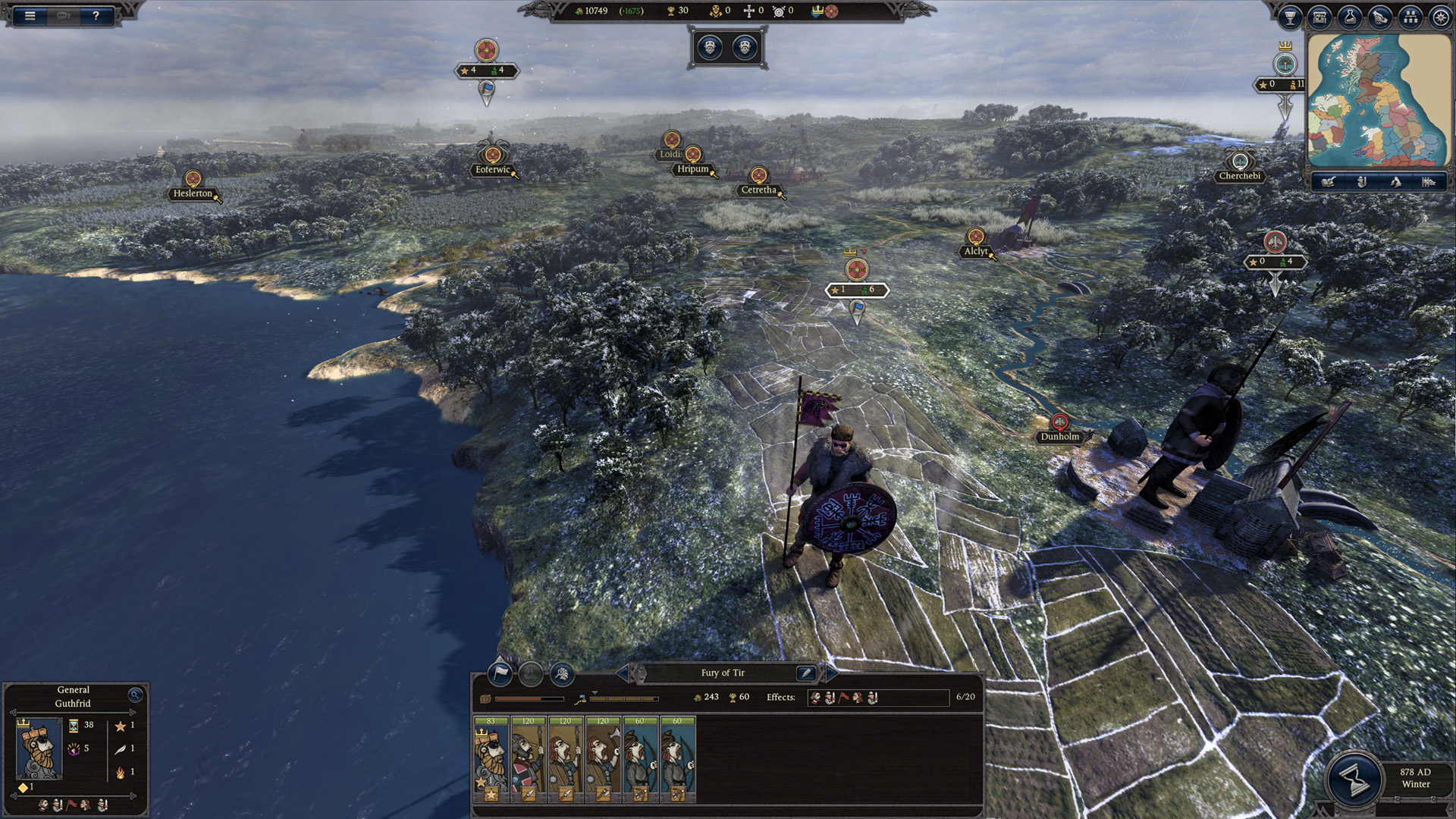 When you’ve exhausted playing the campaign as the ten different faction, you can play through it again via online multiplayer. Fans wanting the jump straight into their own custom real-time battles can do so either against the CPU or in online multiplayer.

Thrones of Britannia: A Total War Saga is a bit of a comedown after the Warhammer games, but it is great to get back into a historic setting. I found the game less intuitive than previous entries, but after a few hours of false-starts I began to get to grips with it.

Those pinning for Total War: Medieval 3 may find this entry somewhat sates their thirst, but fans of Warhammer: Total War, looking for more of the same, may best check out one of the earlier entries in the series such as Attila (upon which Britannia is based) or Total War: Rome II.