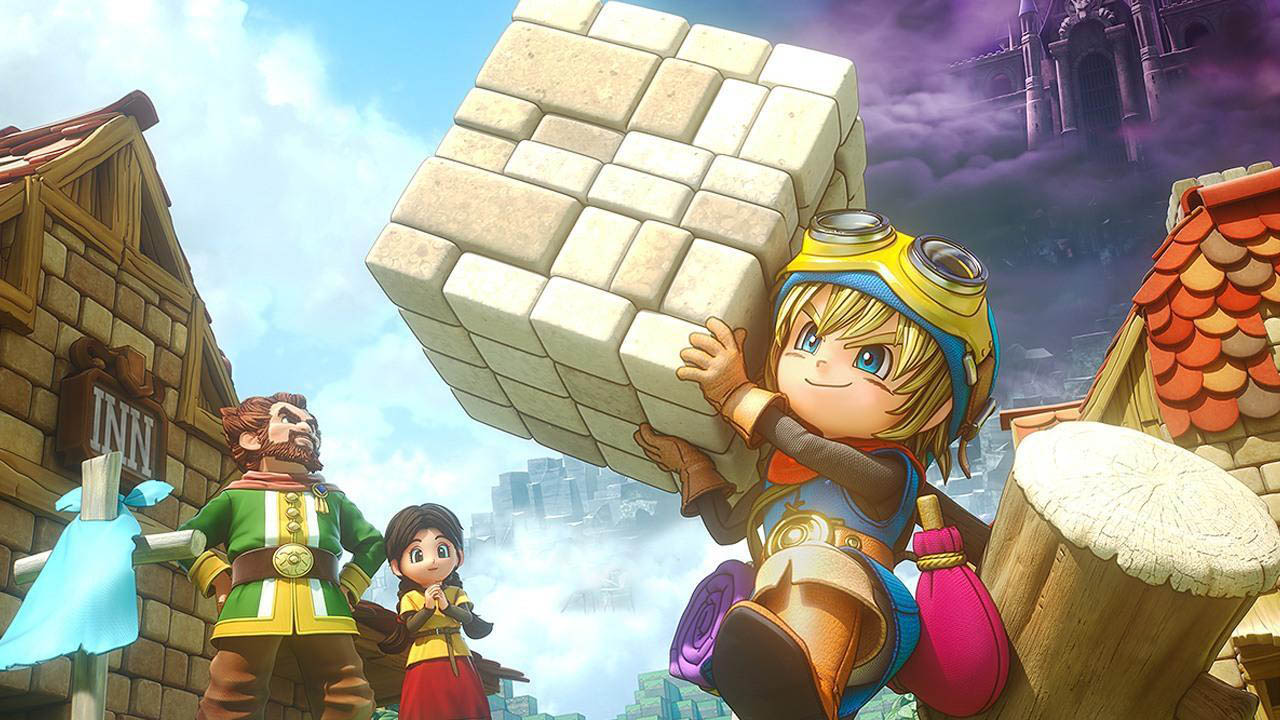 Dragon Quest Builders takes building mechanics and a blocky visual style akin to Minecraft and puts it into a story orientated action RPG with a focus on questing and town building. As someone who loves RPGs and spent countless hours building up towns in Minecraft, this was in theory an almost perfect formula for me.

It took me a while to fully appreciate this. My initial impressions of the game were luke-warm because my automatic reaction was to compare everything to Minecraft, seeing any departure in formula as a flaw. When I stopped comparing and started to see the game for what it really is, I started to fall in love with it. 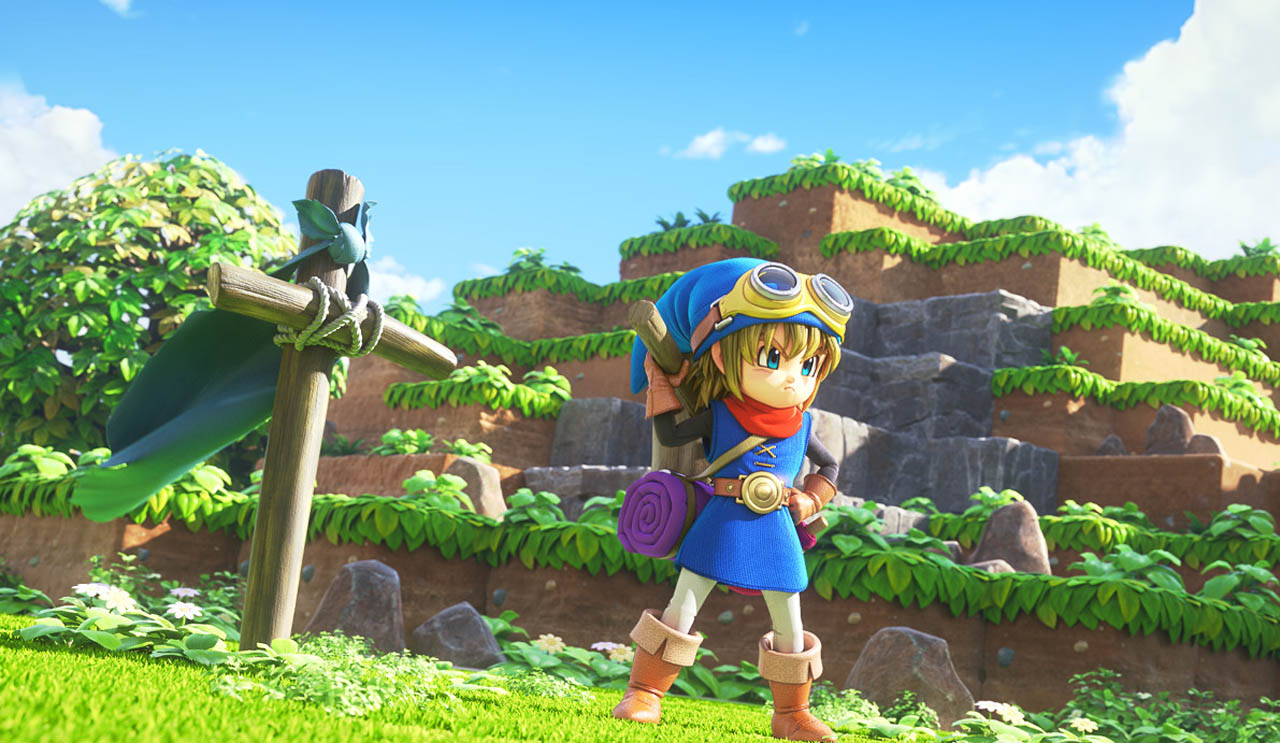 Dragon Quest Builders revolves around two things, completing quests and building a town. Both aspects of the game are done exceptionally well, the latter of which can be particularly addicting and time consuming despite being largely optional.

The story is rather simple and has a fun light hearted tone to it. You play as Builder of legend who possess the ‘power to build new things from raw materials’. While there is unlikely to ever be a Marvel comic series around such powers, the power is rather advantageous and critical in a world where everyone has long forgotten how to do so.

The rather absent villain in the game is the Dragonlord who has brought darkness across the world. Despite being the main villain, the Dragonlord doesn’t get much screen time for a large portion of the game. Instead there are miniature villains along the way who make up for the absence. 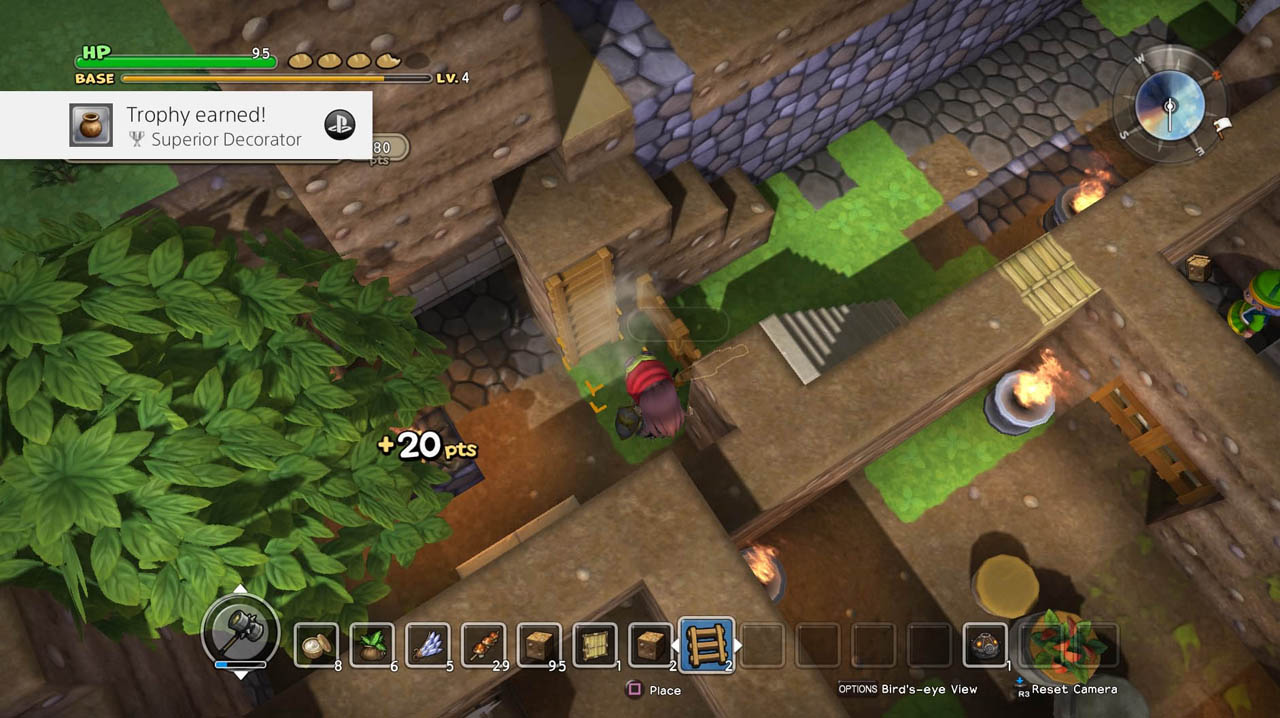 The story is split up into four different chapters. Each chapter involves going to an island, building a town that the remnants of human race can call home and banishing the darkness that plagues the area. While you are unlikely to get engaged with story, I found myself getting somewhat attached to the towns including the characters that live there. Leaving a town once you clear out the darkness is every bit as heart wrenching as it should be.

The upside though is that it stops things from getting stale. Having to start completely fresh, lets you experience that awesome feeling of building up a town from nothing all over again. Each chapter also has a very distinct flavour to it, coming with its own set of environments, resources, craftable items, characters and problems. Exploring and experiencing all the different lands never ceased to be exciting. 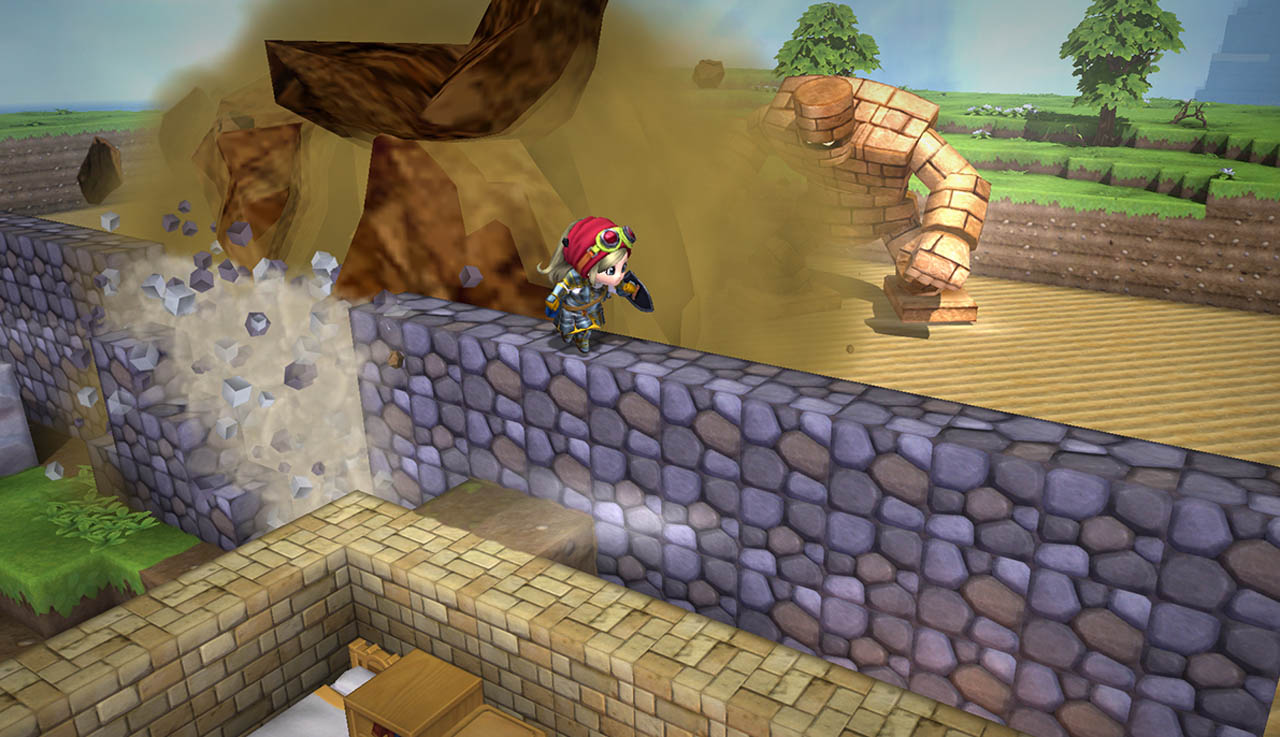 Town building is fun and addicting although a bit restrictive. You create rooms. What you put in the rooms determines the function of the room. Put a crafting device and a treasure chest in a room and your townspeople will start crafting stuff. A few beds and it’s a bedroom that your people can sleep in.

The limits in which you can build something that contributes to the town is rather small. This means you must be selective about what rooms you build as well as how big you build them. The variety of rooms you can build in each chapter is also somewhat limited and there isn’t too much room for experimenting to try and find new room types.

What you will spend your time doing though is improving the rooms and creating an awesome layout. There are numerous types of decorations and other bits and pieces you can put into a room. Doing so can improve the room that are there, providing additional bonuses for the town or in some way improving the function. 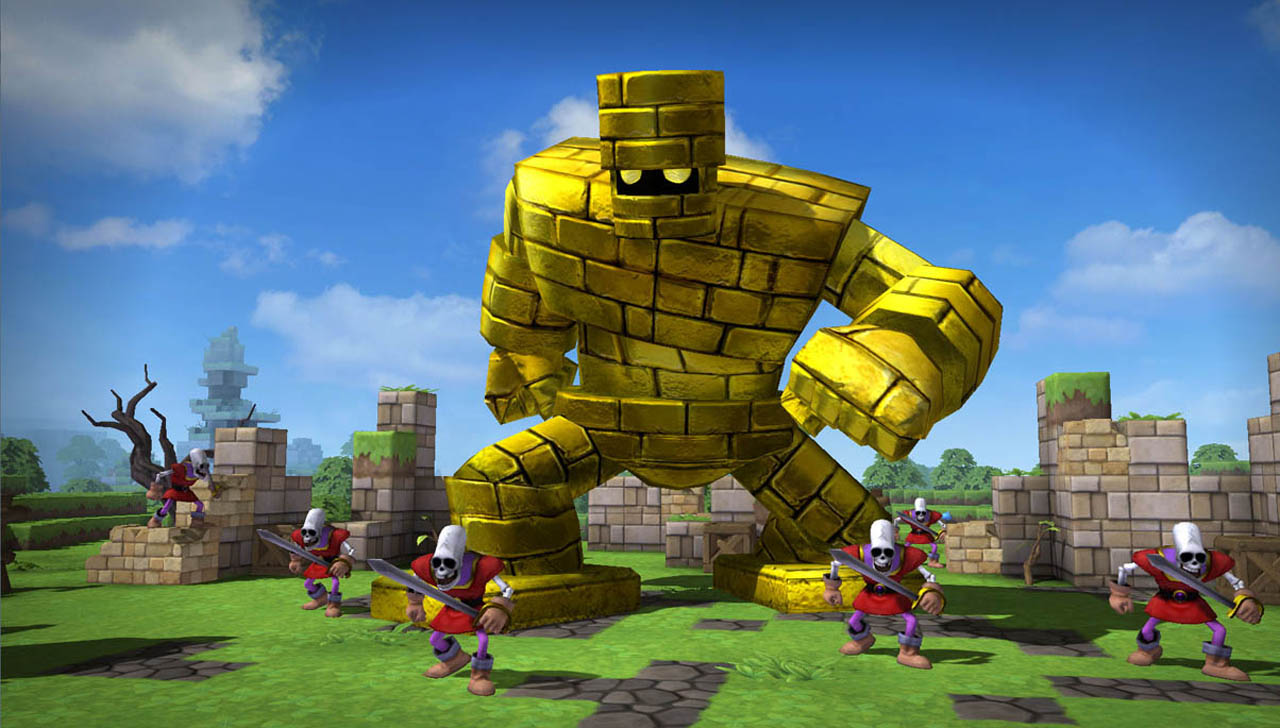 Doing all this contributes to leveling up the town. There isn’t a reward for leveling up the town, outside of getting a quest to do so, which is rather disappointing. Also, the level maxes out very easily. Still, this didn’t stop me from spending way too much time improving my town even well after maxing out the level.  It is just way too addicting.

Crafting makes up a major component of the game. Completing quests and improving the town revolve heavily around it. They have taken a very user friendly approach when it comes to crafting. As you discover new items and progress in the story you unlock recipes. To use said recipe you go to the relevant crafting station and select the item you want to create, assuming you have the resources first.

If I had to fault it, I would say the crafting system is a little bit too heavily reliant on story progress. Even if you have the resources, your character may not think of what they can use it for until it is required in a quest. This comes down to the rather linear gameplay direction the game has taken which in fairness does make it very accessible. 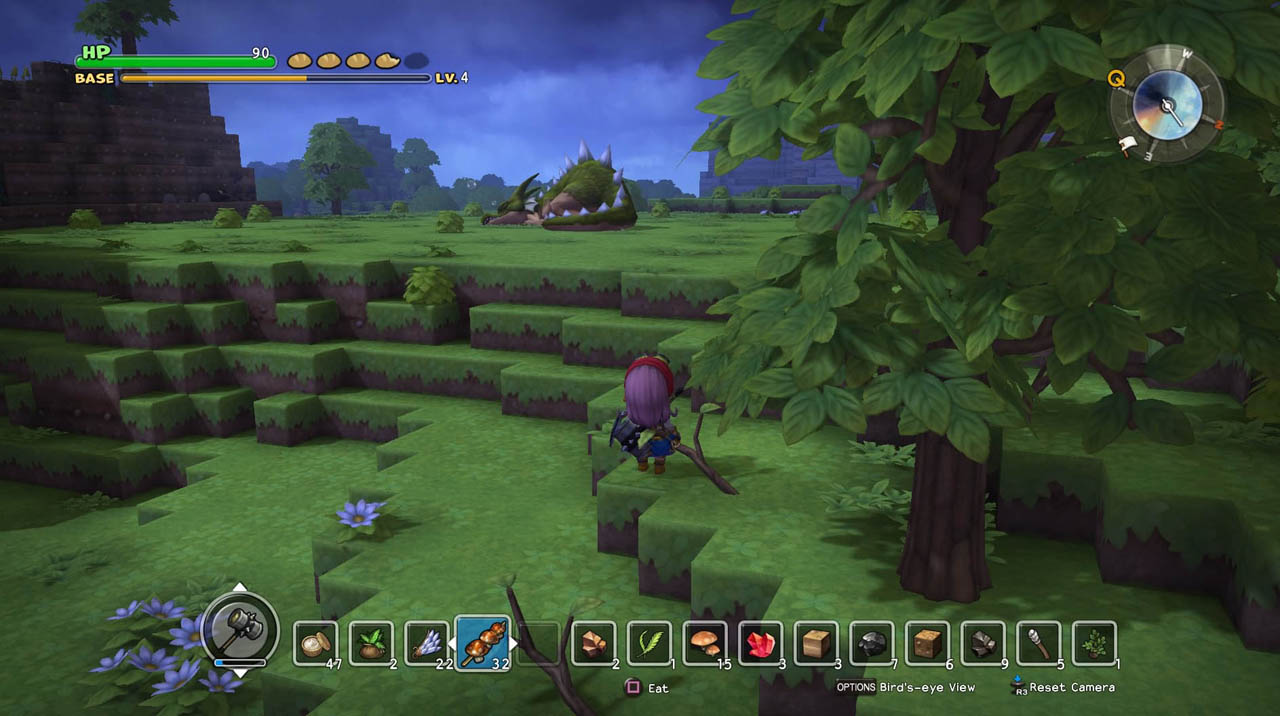 Dragon Quest Builders is an extremely fun and addicting action-RPG that mixes fun building elements similar to that of Minecraft with some good old fashioned RPG questing. The game is very user friendly which plays out through the linearity of the game. This linearity, although perhaps not for everyone, actually is one of the games strengths, giving a sense of progression and allowing new things to constantly be thrown at you. While I expected to like Dragon Quest Builders, I didn’t expect to become as addicted to it as I did. Although it wasn’t really on my radar, it will go down as one of my surprise favourites of 2016.