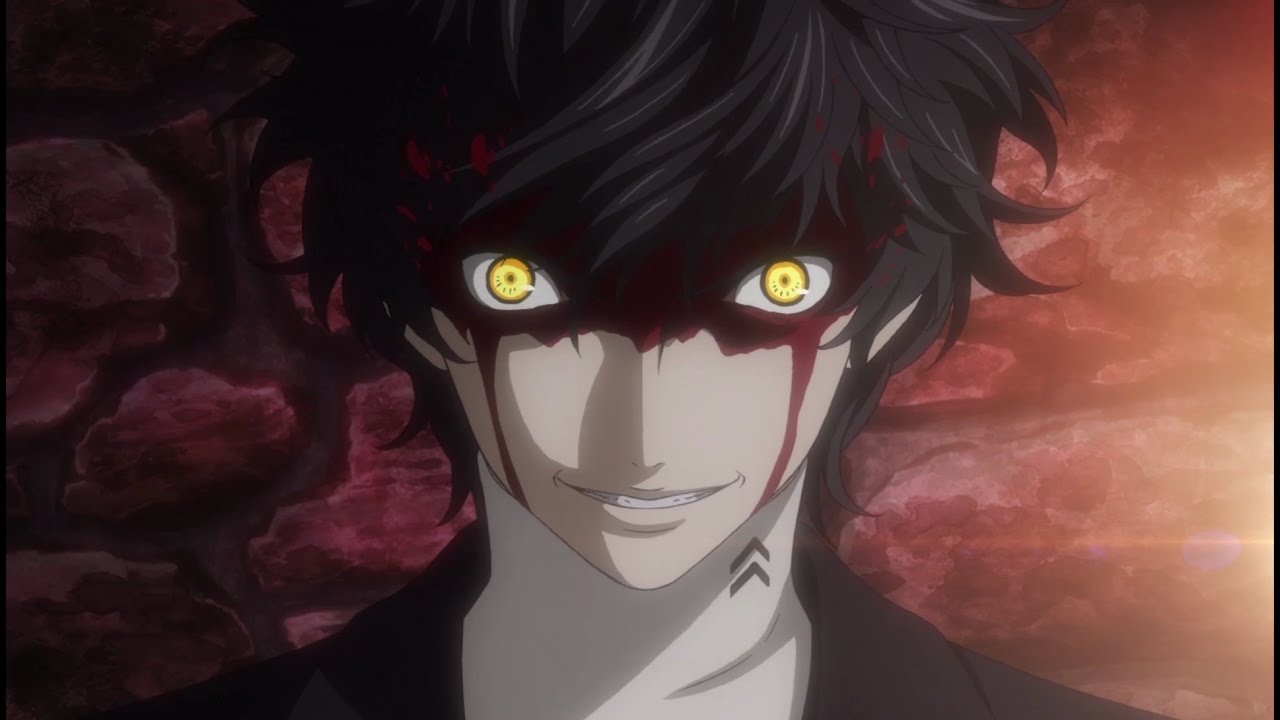 There hasn’t been a brand-new Persona game since 2008’s Persona 4, which was expanded upon with 2012’s Persona 4 Golden, still one of the best reasons to own a PlayStation Vita. Nine years later though we have a new one. Although released for the PS3 (yes, you read that correctly, the PS3) and PS4 in Japan last year, the next iteration in the series, Persona 5 has just been released in the rest of the world. And what a game Japan was holding to itself. Persona 5 is full of pizzazz and style, a distinctly Japanese game that nevertheless remains accessible without forgoing depth, complexity and most of all originality.

Trying to summarise the story of an (easily) 100-hour game is an impossible task, and publisher Atlus have been extremely strict with spoiler content. The story begins with you starting at a new school in the city, having transferred from the country after being falsely accused of assault when preventing a rape and kidnapping. Of course, that’s not the end of it, and you soon find yourself switching between realities, managing your daily schedule and developing relationships with your classmates and other people you meet along the way. 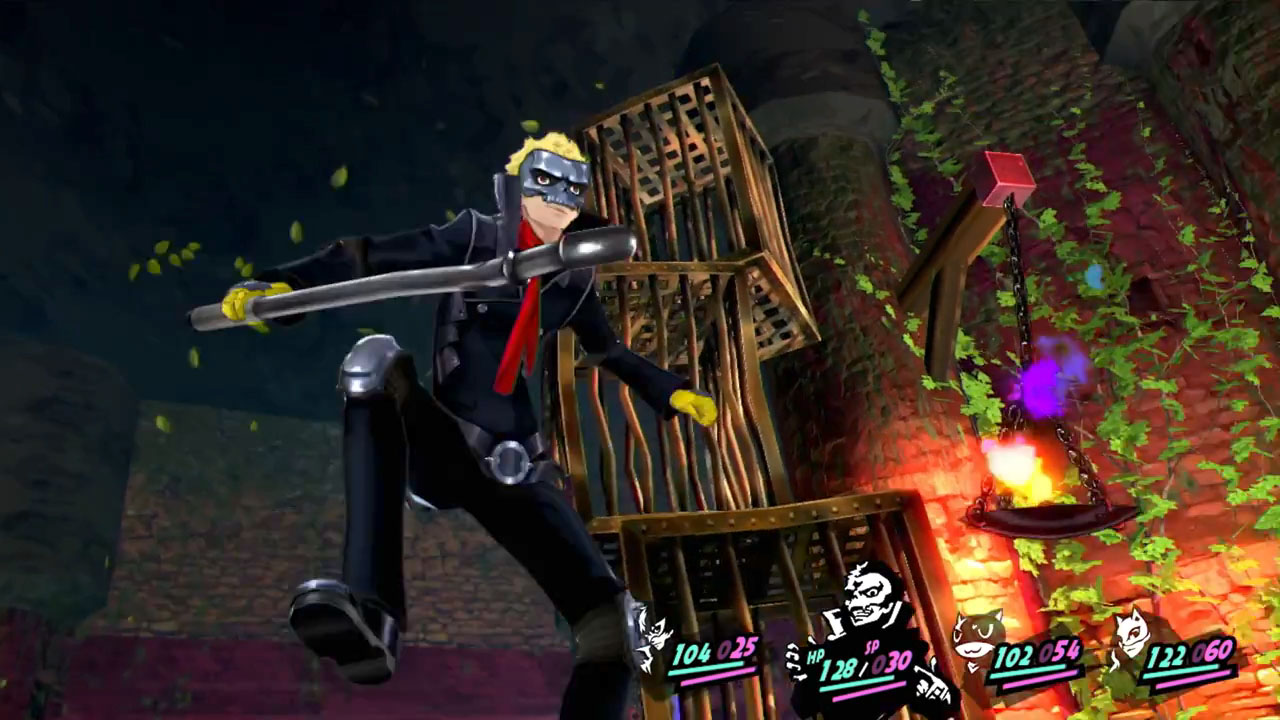 Your time in Persona 5, just as in the other games, is split between the real world and delving into “palaces,” dungeons representing the state of mind of a person from reality. Thus, for example, the first palace is a castle, a representation of the attitude the Olympic medallist gym teacher takes towards the school you attend. These palaces are where you take part in turn based combat in highly designed dungeons, contrasting sharply against the randomised environments of previous games. This is for the better. Combat is turn-based and you use your personas like magic spells, but bringing the right combination of classmates and their personas on your trips to the palaces is essential.

There is a strong psychological element through the game, and evident most strongly in these palaces, constructions of the human mind representing what, at our base level, what we desire and who we really are. Beyond our psychological mask (in the game’s parlance your Persona) it suggests, is the potential for greatness (as in your classmates) but also for great evil (teachers and other evil authority figures). This theme runs throughout the entire game, and reflects not only some basic philosophy, but reflects and questions Japanese culture as a whole. What would all those salary-men really want to do if given the opportunity to choose? We are both warned off mediocrity and shown the door to what we could truly achieve. 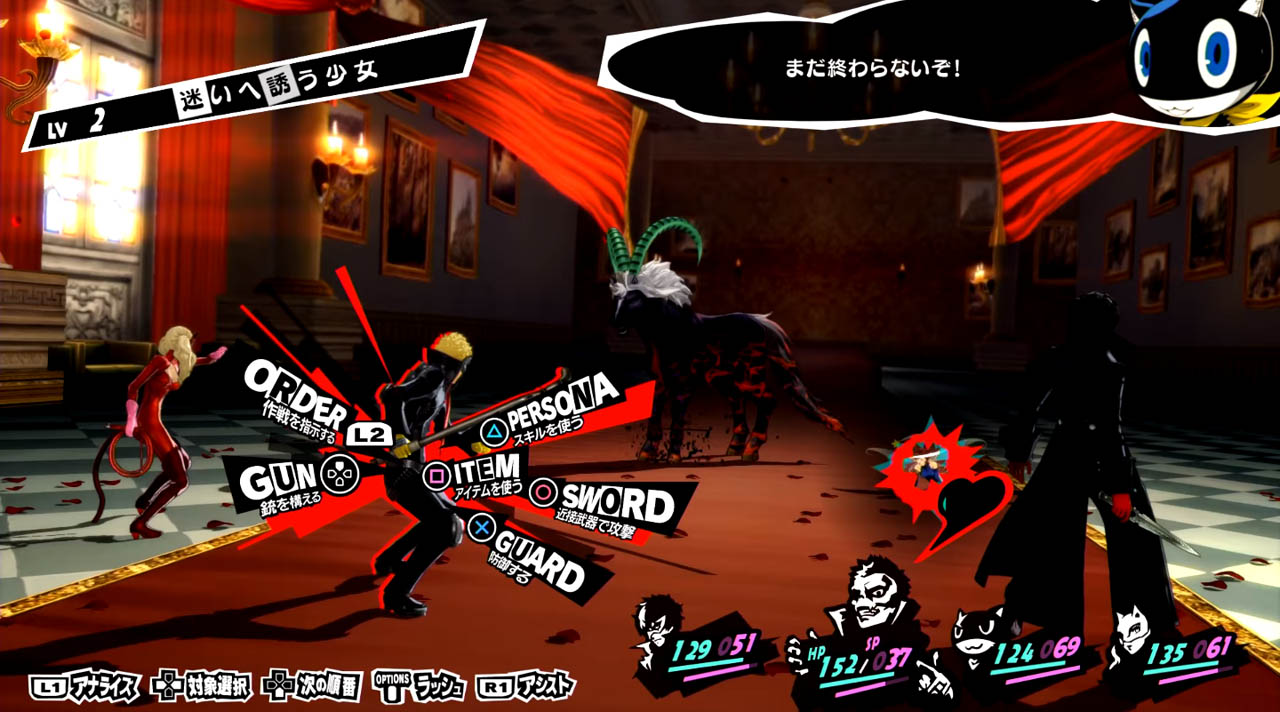 Outside of the palaces you’ll be attending school (including answering real questions in class! Recommendation: don’t be afraid to search for answers you don’t know), holding down odd jobs, making friends and staying out of trouble. These are not side missions in the traditional sense, and are essential in raising various stats such as “kindness.” They are also interesting in their own right, are well-written and quite often draw out strong emotions. Over the tens of hours you will spend with this game, certain characters become very close. The game is largely a linear story, but the ability to choose what to do each day gives you a sense of freedom and agency that helps you to define your own experience. This includes dialogue choices in sometimes book length conversations, especially early on, and combined with the limited save opportunities can occasionally be a bit frustrating if you have to share the PS4 and can’t rely on its suspend mode function.

The two sides of the game, the palaces and the “real world” are linked: classmates you confide in will be stronger partners in the dungeons and the deeper you delve into their backstory and longer you fight with them, the more connected you feel to them. It’s a nice way to bring together two otherwise quite different elements. 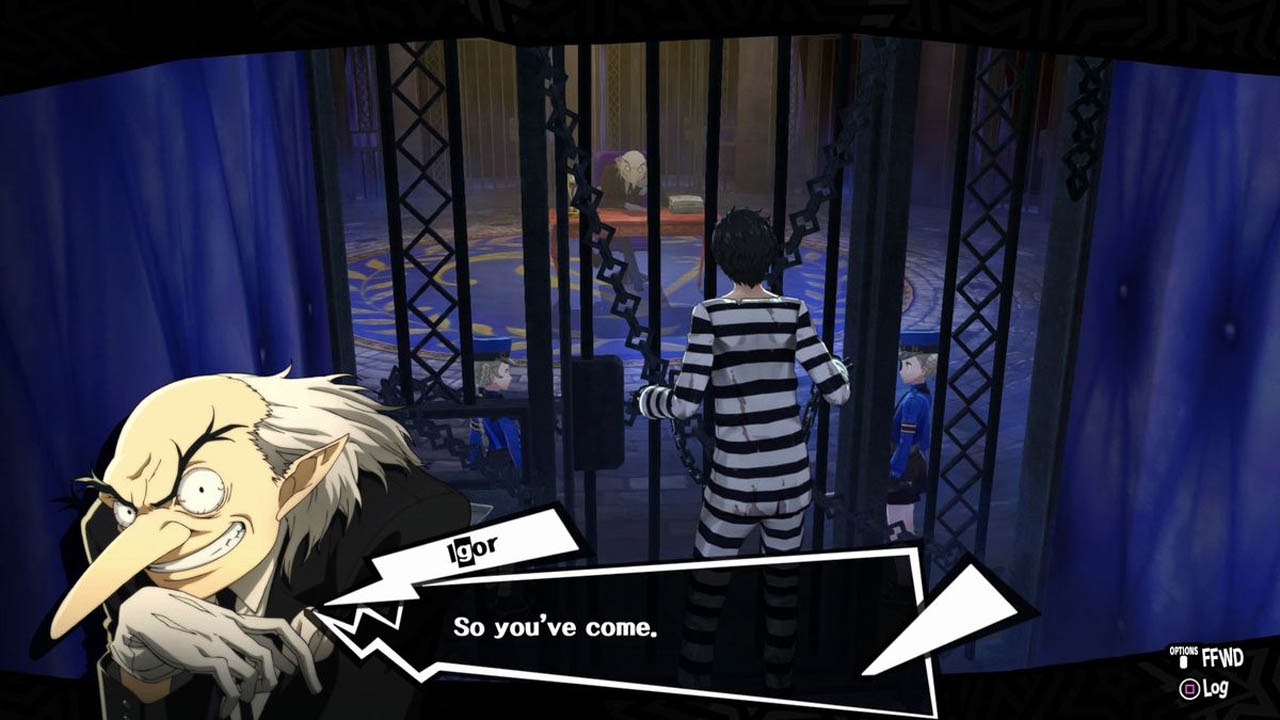 Persona 5 retains the series’ anime visual style, and the truly animated scenes are a joy to behold, although Ni No Kuni still takes the prize for best animation in a video game. A strong black-and-red aesthetic is evident throughout the whole game, and there are nice bits of polish everywhere you look. The best way to describe it I think is decadent. Character portraits fill the screen in key moments, and battle menus explode from the bottom left corner. One of my favourite parts are the brief loading screens, where, for example, faceless commuters walk across the screen as you take the train to school every day. Small touches like these elevate the game from merely great to exceptional. When you catch the Tokyo subway to school on your first day, for example, you must navigate its complex hallways and signs to find the correct platform for your connection. In any other game that would be boring, but Persona manages to pull it off so well it’s endearing, not frustrating. We are lost just as the main character is, unsure of where to go and what will come before us.

My only complaint is I couldn’t get the Japanese voiceover DLC to work, although your experience may be better than mine. I saw no evidence of slowdowns throughout my playthrough, with the frame rate holding up very well. 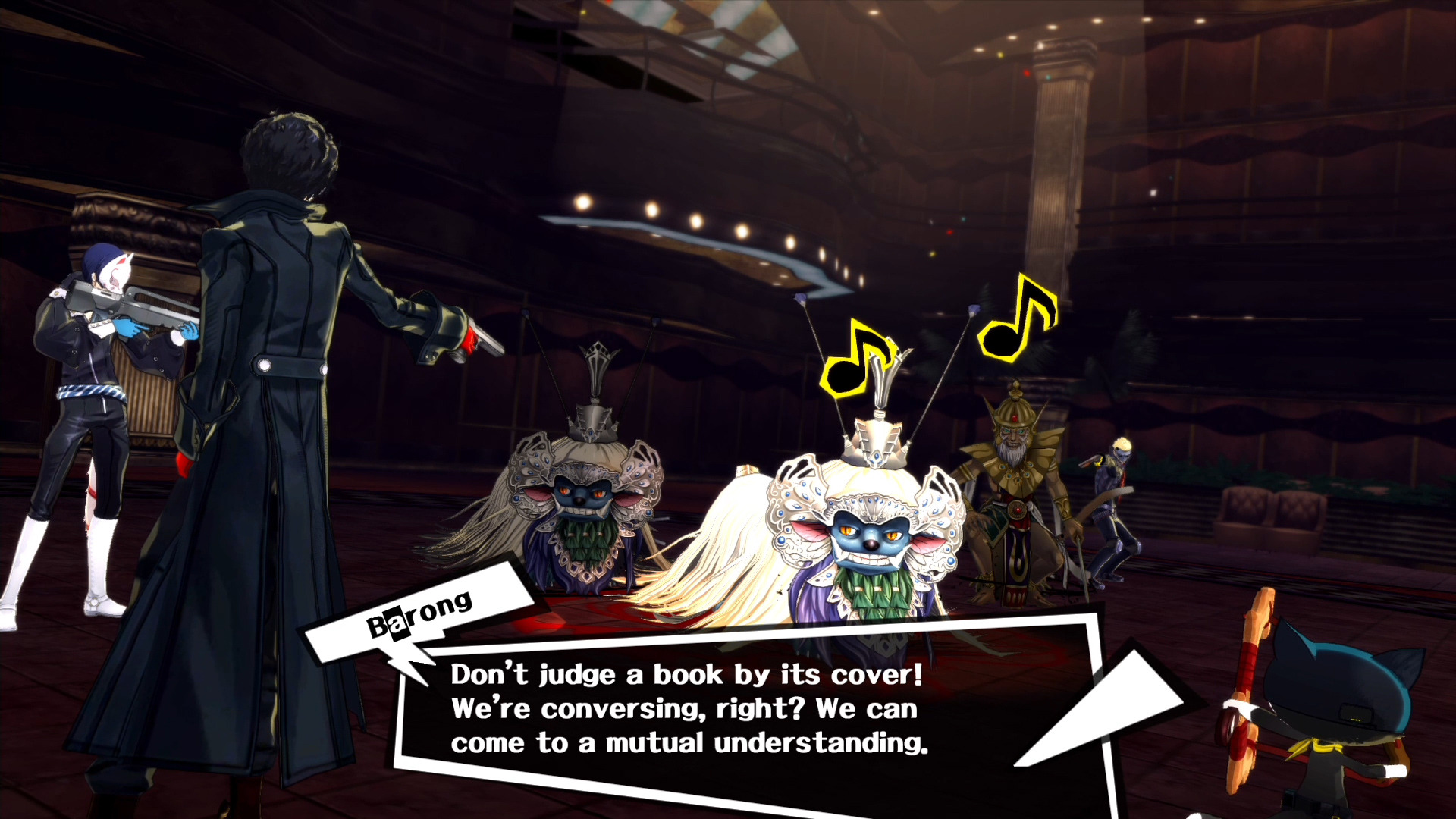 Persona 5’s publisher Atlus have attracted concern and heated discussion about their extremely strict spoiler content policy. Reviewers, streamers and players are not allowed to share most of the game, under threat of legal action. The native screenshot and video sharing features of the PS4 have been disabled completely outside of the title menu. This is an anti-consumer policy that can only hurt games, game developers and gamers, and one that I hope is never repeated. In a game that has a high spoiler potential, I understand the publisher’s concern to not allow the core experience to be ruined, but I can’t help but feel this will hurt the game more than help it. Persona 5 is a unique game, and can be hard to understand if you haven’t played it. I feel that streaming could have helped reveal the game to more people, and it’s a shame that will now be limited.

With this fifth entry in the series, Persona is set to break out of its well-loved niche and into the mainstream. It has all the elements necessary to be a huge hit, and sets up the franchise to be at the centre, not the margins, of gaming. The long wait between Persona meals has been worth it. Persona 5 comes at the tail end of a huge glut of fantastic games this year, especially for the PlayStation 4. NieR, Horizon Zero Dawn, Yakuza 0,Nioh and of course the Legend of Zelda: Breath of the Wild. Despite this veritable menagerie of excellence, Persona 5 stands out. It is the maturation of the JRPG formula to magnificent new heights, and shows there’s life left in the genre yet. Both Final Fantasy XV and Persona 5 have attempted this feat, but for all the work Final Fantasy XV put in, its Persona who gets the better grades. If this really were a school, Persona 5 would easily earn its A. 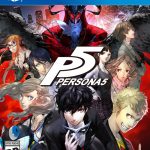