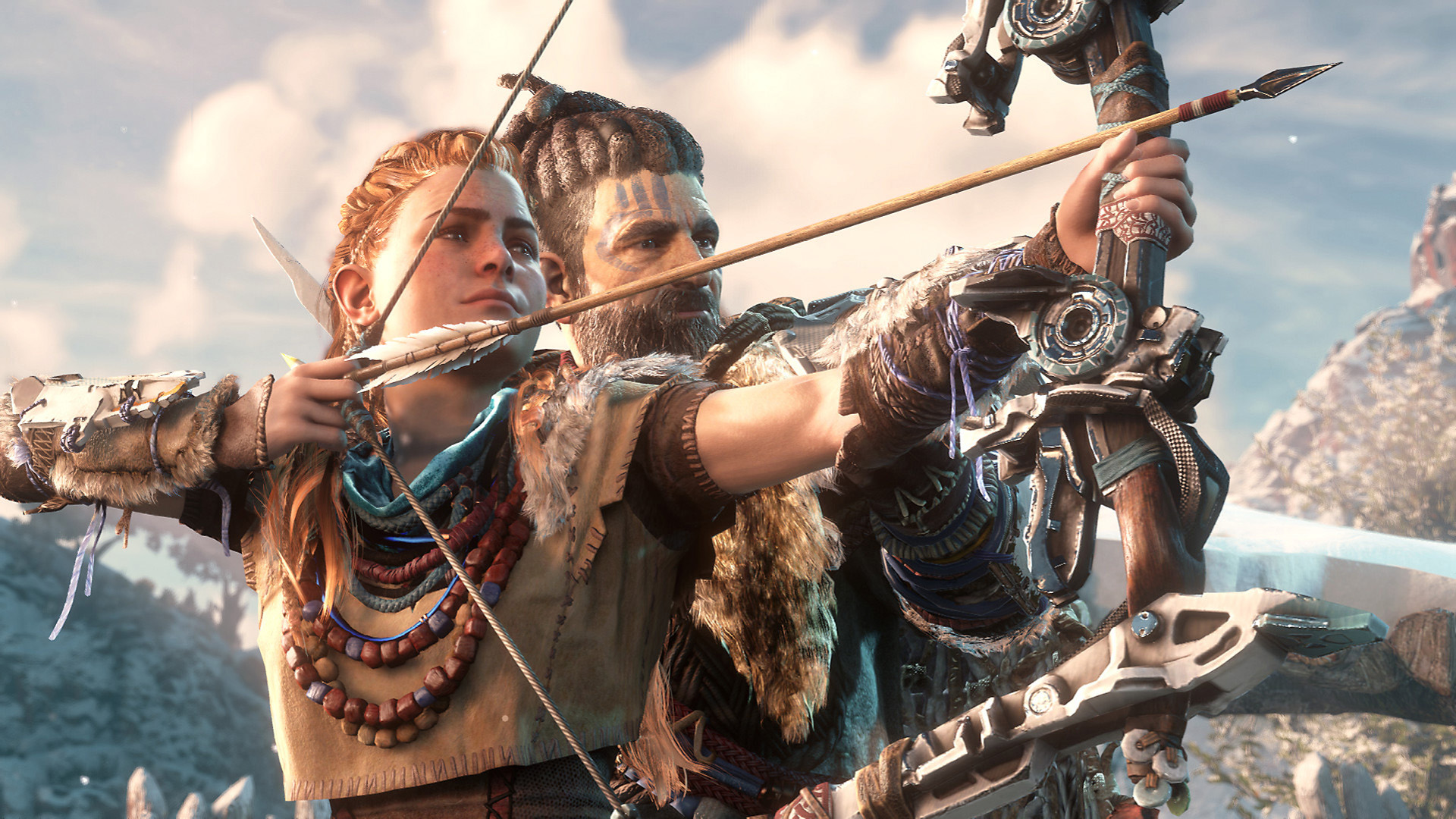 Following on from the stunning-looking Death Stranding, it’s the turn of Horizon Zero Dawn, another former PlayStation 4 exclusive to get a PC overhaul. Hopefully Sony is taking notes, because the best way to play PlayStation games would seem to be on PC.

The console war: kamikaze fans of the two heavy hitters, PlayStation and Xbox, duking it out in an eternal battle for gaming supremacy, whilst Nintendo cleans up, quietly in the background. Looking down on this playground battle, like smug school prefects, are the rest of us. The self-styled elite, the PC gamers.

Here we are with our massive boxes humming with fans, cooling cutting-edge technology that’ll only see the light in the next-gen of games consoles. We laugh at console owners salivating over their measly 60 FPS and primitive screen-space reflection, whilst we bask in the glory of 144hz refresh rates and real-time ray-tracing. 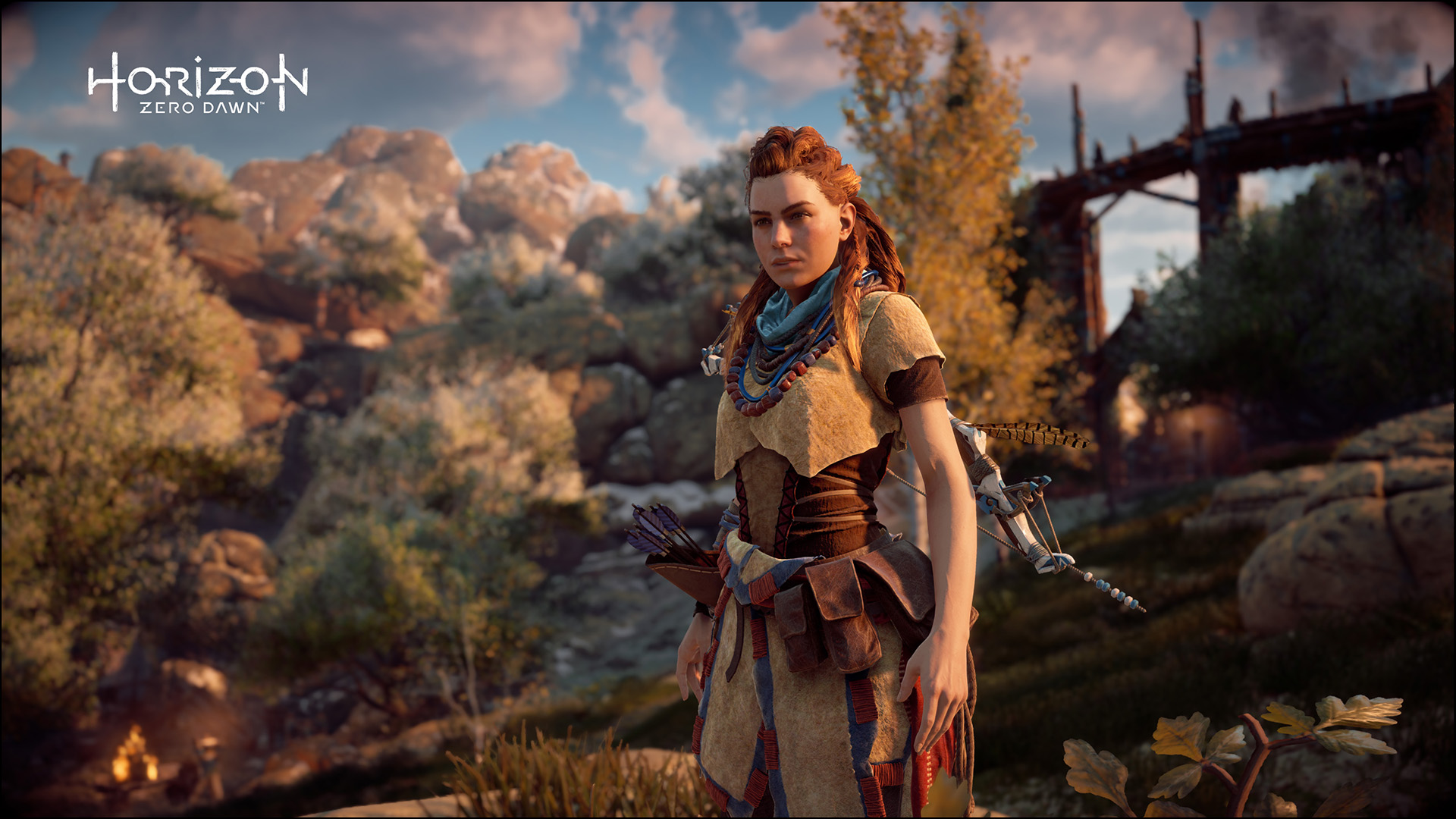 All the while wishing we could play The Last of Us Part 2 on our $3000 games consoles.

Well, whilst we may be waiting a long time before Naughty Dog’s opus graces our monitors, Sony Interactive Entertainment are starting to take PC gaming rather more seriously than they have in years. I’ve already mentioned Hideo Kojima’s former PS4 exclusive, Death Stranding, which is now available on PC.But it’s the upcoming arrival of Horizon Zero Dawn on PC that could open the door for more of Sony’s superb PlayStation 4 back-catalogue finding their way onto our monitors.

On its initial PS4 release, back in February 2017, Horizon Zero Dawn was a major departure for Guerrilla Games, more famous for their Killzone first-person shooters. The vast post-apocalyptic open-world of Horizon is a far cry from the developer’s futuristic shooters.I was blown away by Horizon Zero Dawn and it’s DLC The Frozen Wilds when I played it on the PS4. 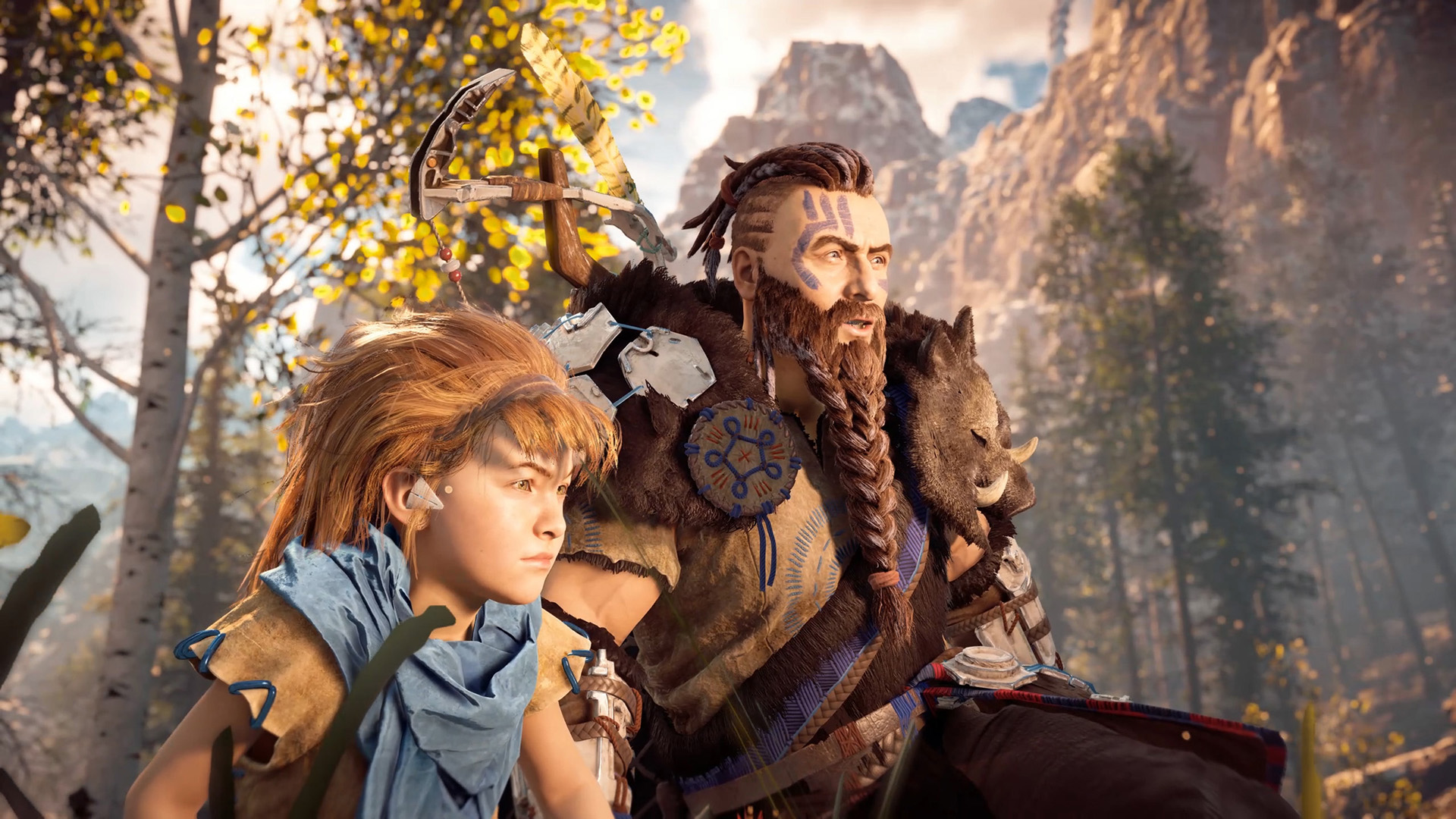 The game follows Aloy, a 19-year-old girl, raised as an outcast by Rost, who is a fellow outcast of the Nora tribe. Aloy’s world is a future 1000 years after the fall of civilisation. Nature has reclaimed the earth with human society having regressed back to a tribal level. Relics of the old world are feared and shunned by the Nora people. This is not surprising as the human share the world with aggressive animal-like robotic creatures that roam in packs.

The world building is superb and really feels alive. The plot follows Aloy as she seeks to find out where she comes from and unlock the secrets of her origin. Her journey allows us to take in the amazing landscape pocked with ruins of human civilisation for us to explore. The game takes players though a variety of different lands each with their own tribal cultures. The settlements and outfits of the tribes-people repurpose relics from the past as building materials and trinkets. It’s a storied and believable world that it both interesting and exciting.

The gameplay is mission-based. Resource collection and crafting play a major part in progressing: for constructing ammo for the weaponry as it is unlocked. Whilst wood and plant can be used to construct arrows and health remedies, the good stuff comes from the robotic creatures that roam the land. 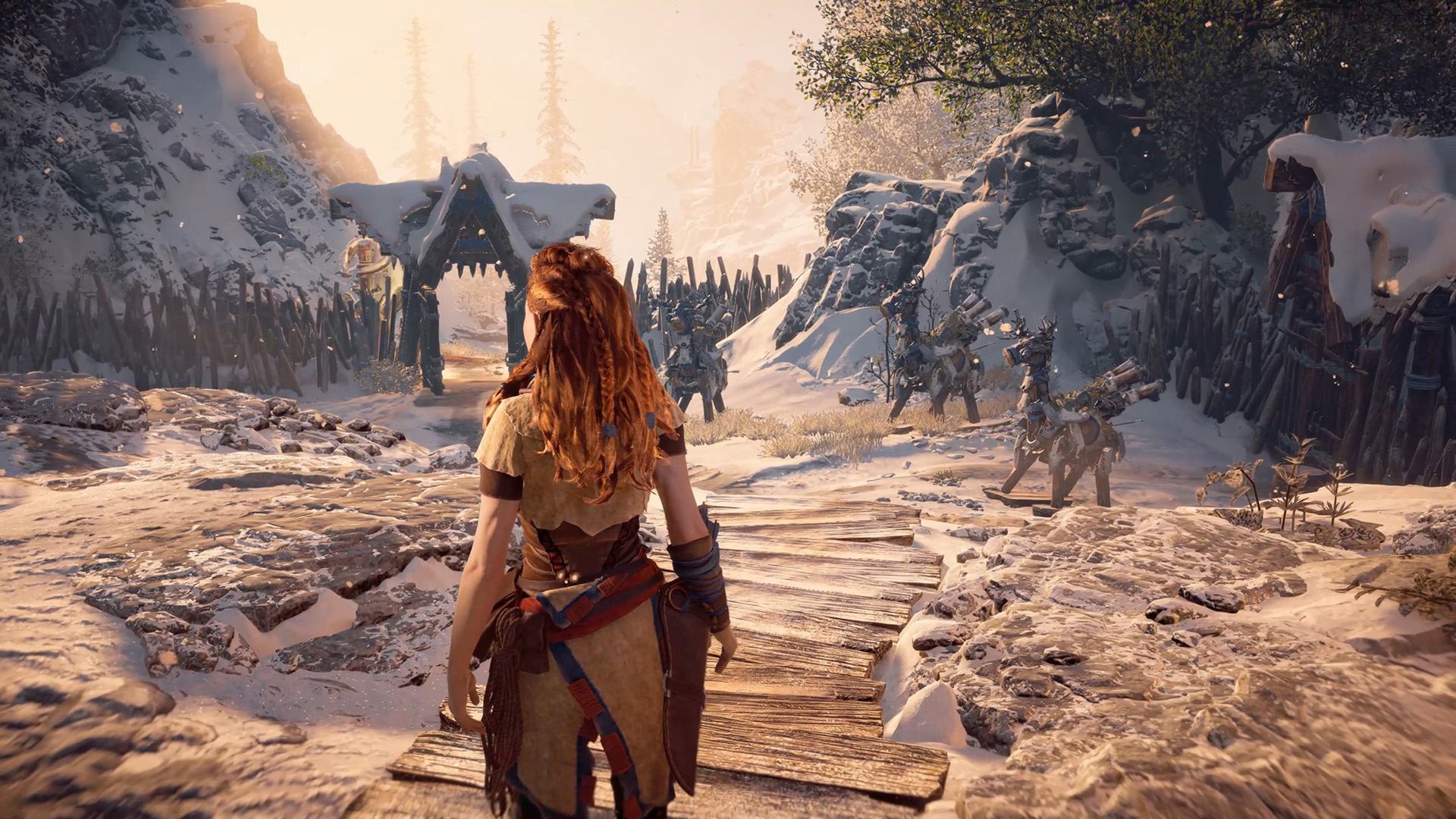 Early in the game, as a child, Aloy finds a device that enables her to scan the world. As an adult, Aloy can use this device to gain information on her prey, such as vulnerable areas and patrol routes. This is handy when hunting the creatures as a stealthy approach is often the best way to attack.

The game features the staple role-playing game skill tree that allows players to unlock abilities as Aloy levels up. This keeps things fresh and interesting.

Horizon Zero Dawn looks amazing on PlayStation 4, but even better on PC. The character animation and attention to detail, plus the amazing environmental effects in the game are all present in the PC version. Additional touches, like vegetation that reacts to Aloy’s movement (something that bugged me on the PS4) are sorted out and included for PC players. 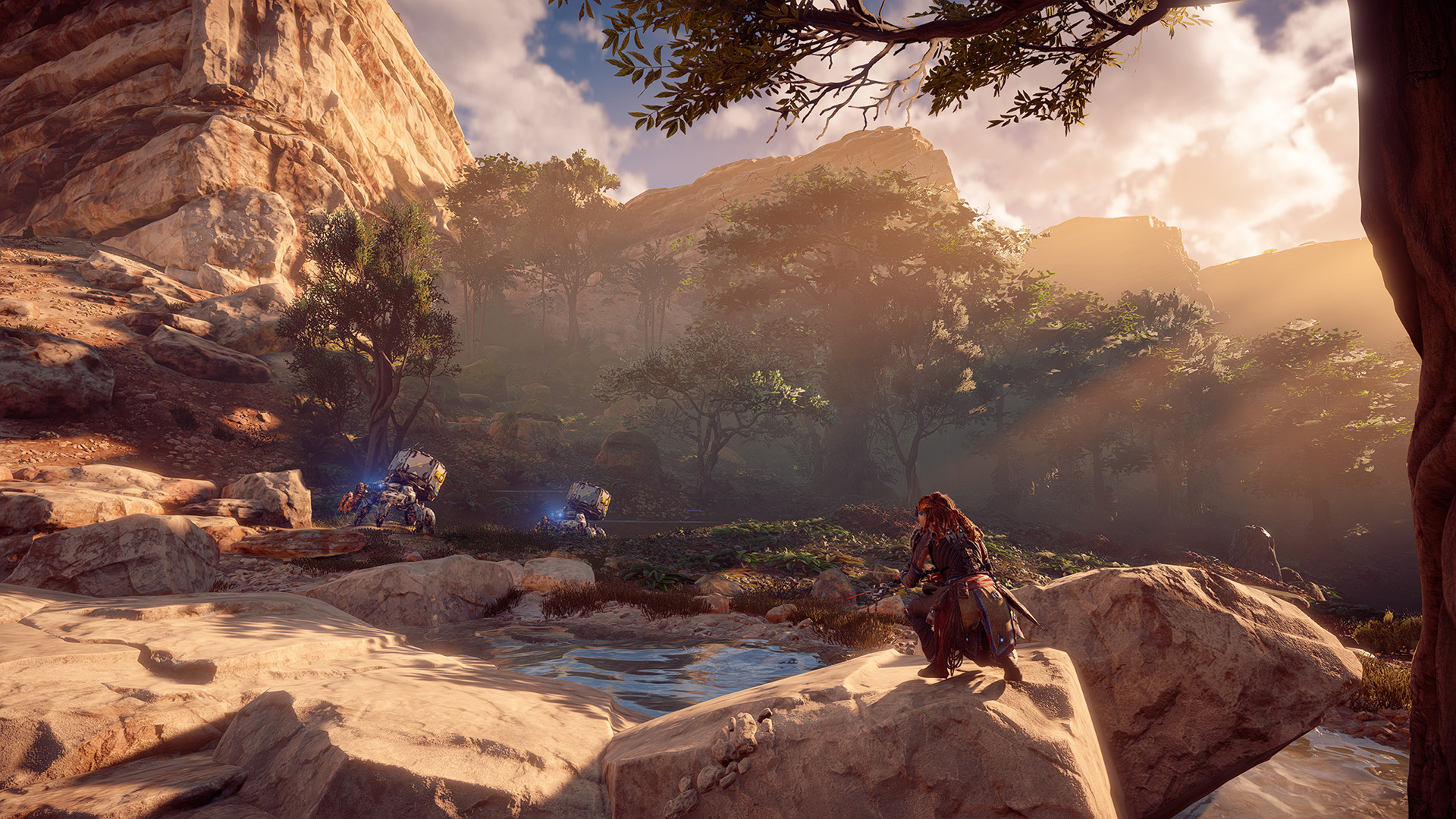 The game comes with the full gamut of graphical settings, allowing players to tune their experience according to the specs of their PCs. The frame rate can be unlocked for some blisteringly fast refresh rates, far in excess of the 60fps of the console version. The game supports HDR if you are lucky enough to own an HDR monitor, as well as ultra-wide resolutions.

The review build of their game did have some issues with anisotropic filtering which gave me some jaggies in the background. This was at max settings at 1440p running on an RTX 2080 Ti.  The resolution scale only goes up to 100%, so super-sampling this away seemed out of the question. Interestingly, I was able to crack up the resolution to 4K which, when down-sampled to my monitor’s native resolution, completely eliminated any unwanted graphical artifacts. The resultant image was crisp and clean. Beautiful, even.

The day one patch (which I’ve just downloaded) is supposed to address this, apparently. A quick look shows improvements to ambient occlusion settings. I’d say there was still some room for further optimisation, but the game does run fine as it is.

Horizon Zero Dawn: Complete Edition is an epic adventure, this PC version being the definitive version of the game. Stunning visuals, an intriguing story and great open-world gameplay make this a highly recommended title. 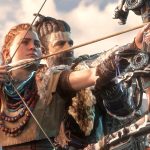 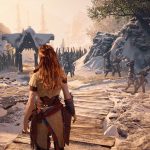 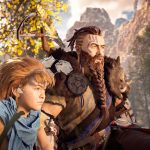 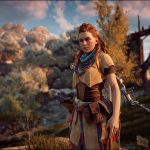 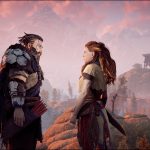 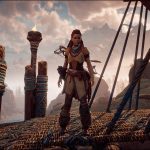 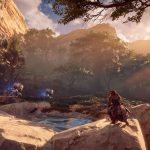 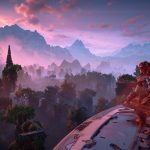 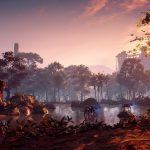 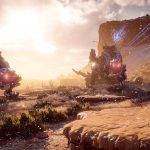 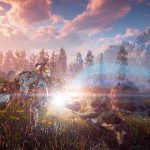