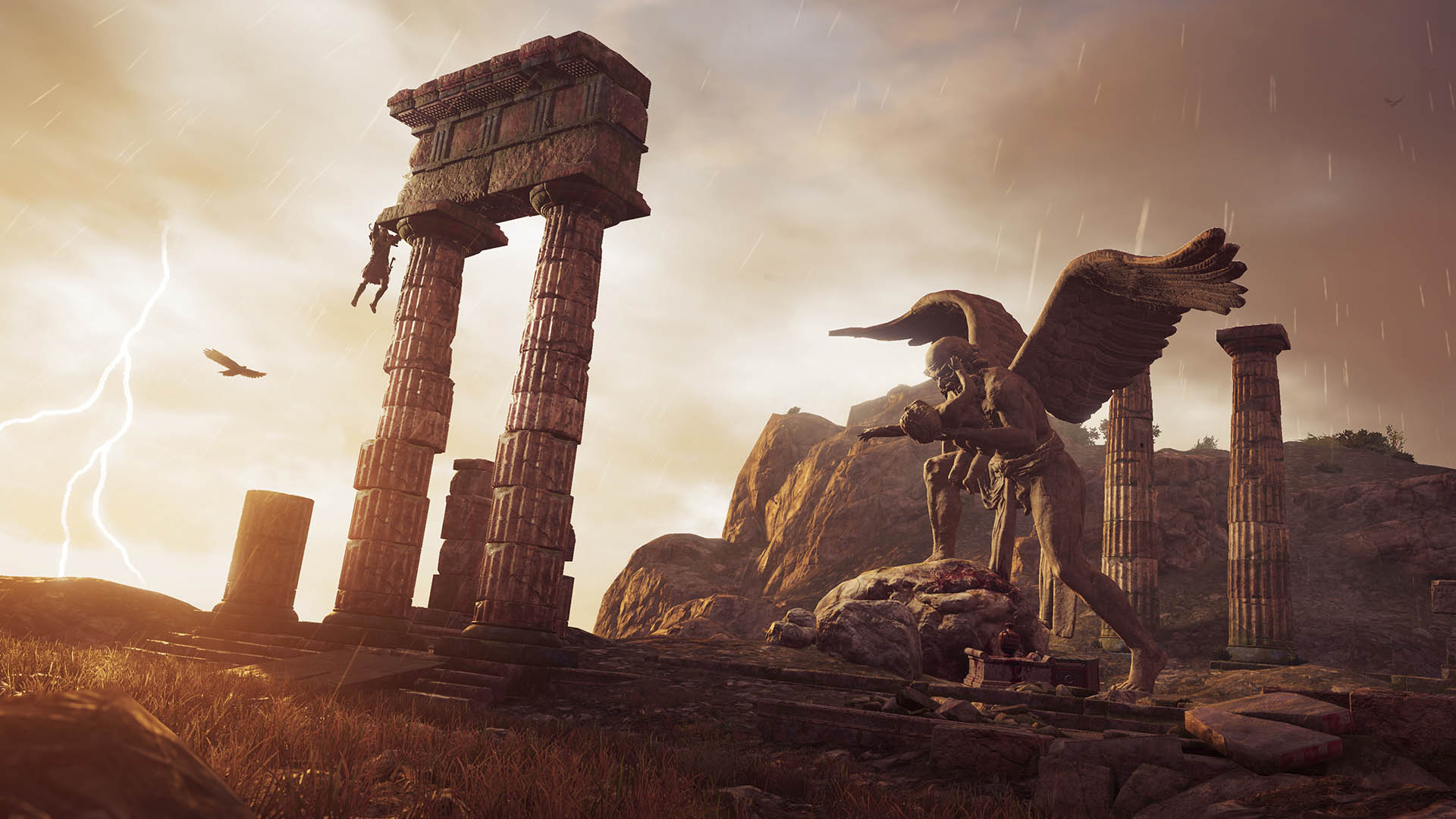 Hardly seems like the actions of someone that really enjoys the Assassin’s Creed series, does it? Well, the great thing about Assassin’s Creed games, and their biggest problem, is that they are huge.

Packed with side quests and collectibles, as well as huge and detailed worlds to explore, Ubisoft’s tent-pole franchise is almost too much. I’m easily side-tracked, making even completing the main story a mammoth task. In amongst life, and other games to review, setting aside the time to scour the games for all their content is an issue. 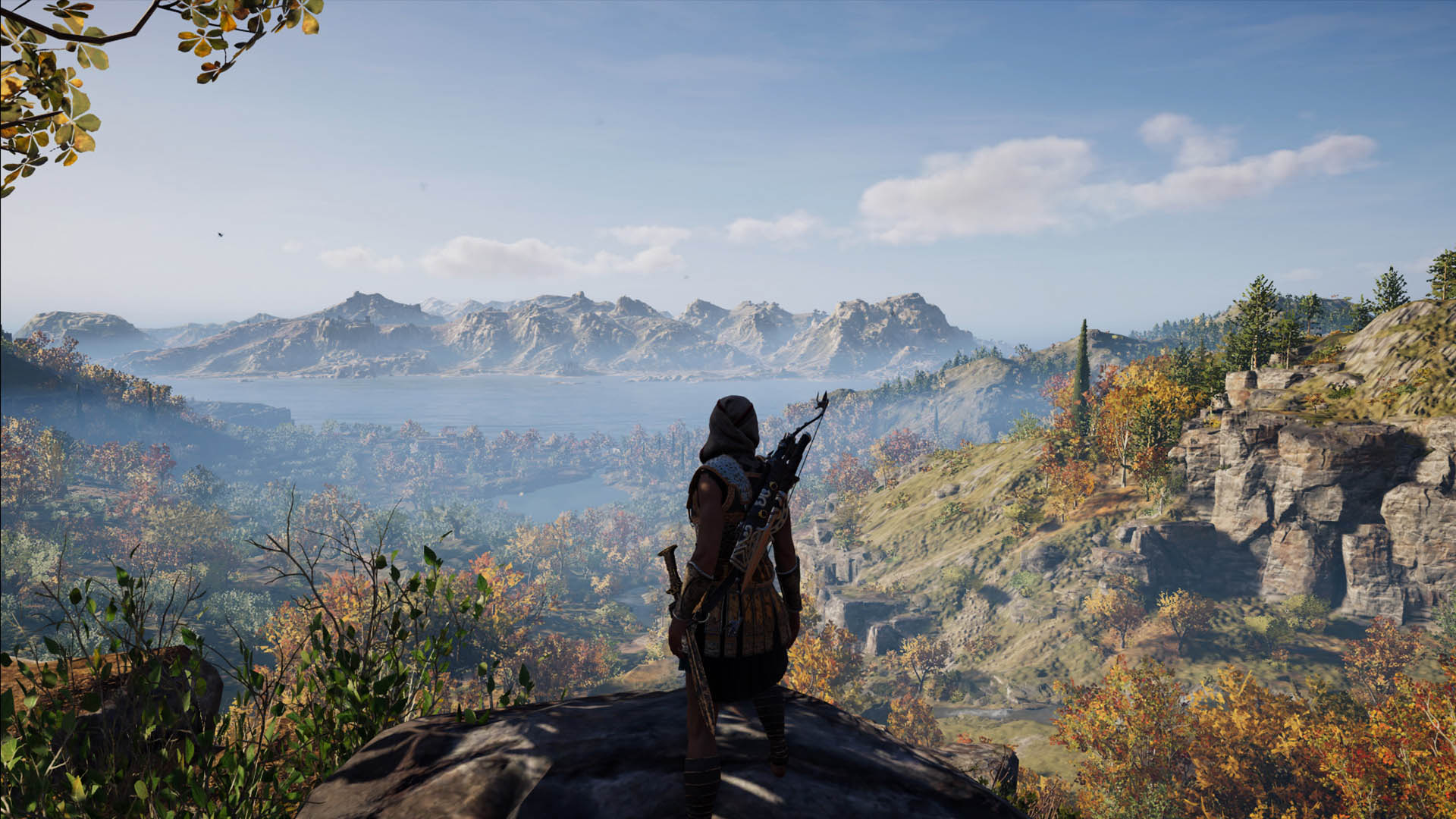 For those for you that have spent the last decade living under a rock, Ubisoft’s Assassin’s Creed games follow the millennia-old conflict between The Templars and the Assassins. The modern-day Templars, Abstergo Industries, have developed technology called the Animus that unlocks genetic memory stored in DNA, allowing users to experience the historic subject’s memories first-hand.

The Templars built the Animus to seek out ancient artefacts created by a race of beings predating mankind. With these artifacts, the Templars seek to control the human race and shape its destiny. The Templars see themselves as mankind’s saviours, even if their methods can be a little forceful.

Throughout history the Assassin’s Creed have been thwarting the Templars’ plans. With a couple of notable exceptions, for the most part players take on the role of the Assassin in the games. 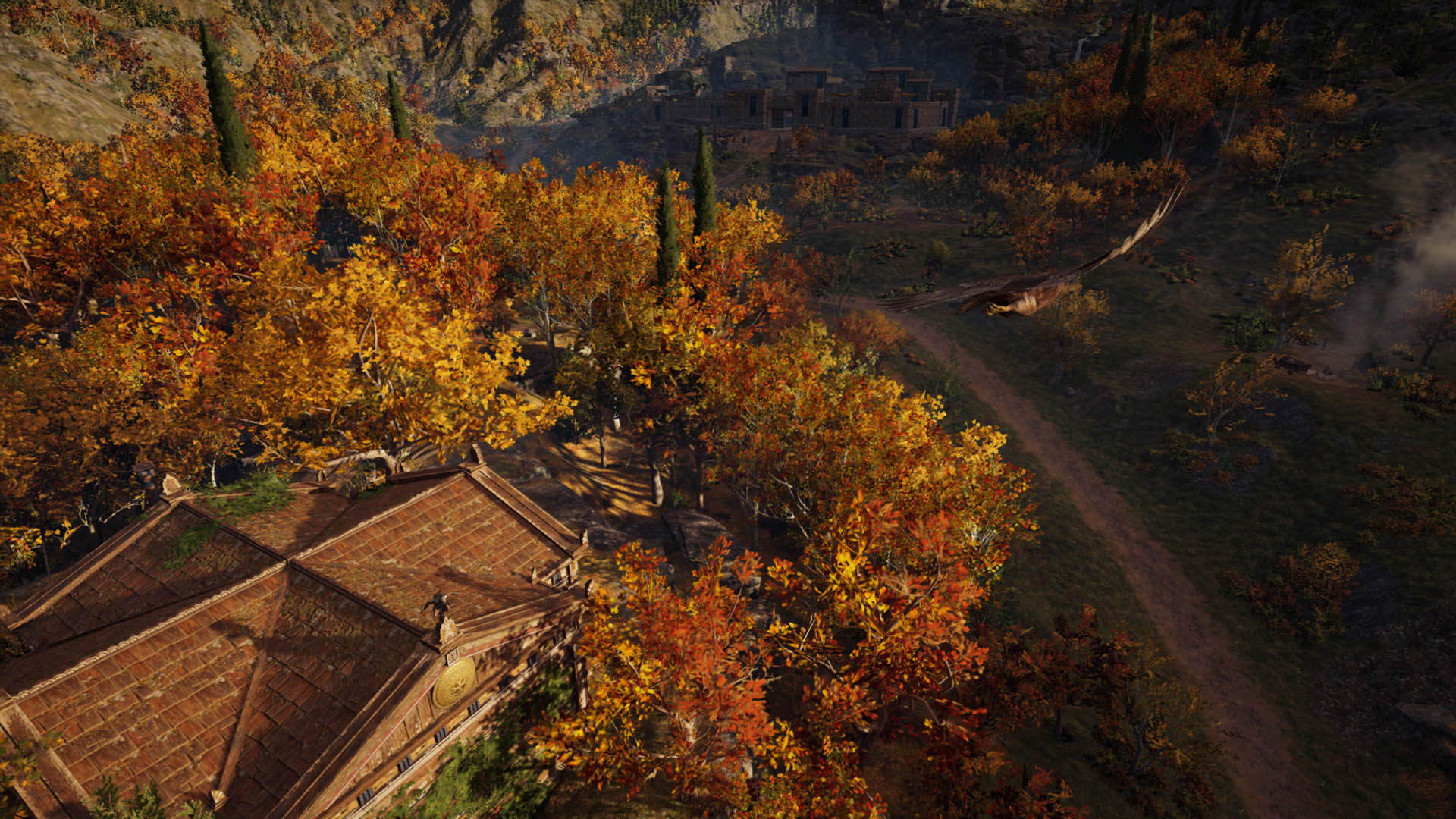 Assassin’s Creed Odyssey takes the series back further than ever before, before the start, even, of the conflict between the Templars and the Assassin’s. Whilst Origins told the story of the first Assassins, Odyssey reveals the beginning of the political intent that would one day be the Templars.

The PC version of Odyssey, with its advanced anti-aliasing, looks like a CG movie and running in 60fps, plays silky-smooth. That’s not to say the Xbox One version looks shabby – it looks great, it’s just that the PC version looks and plays better. 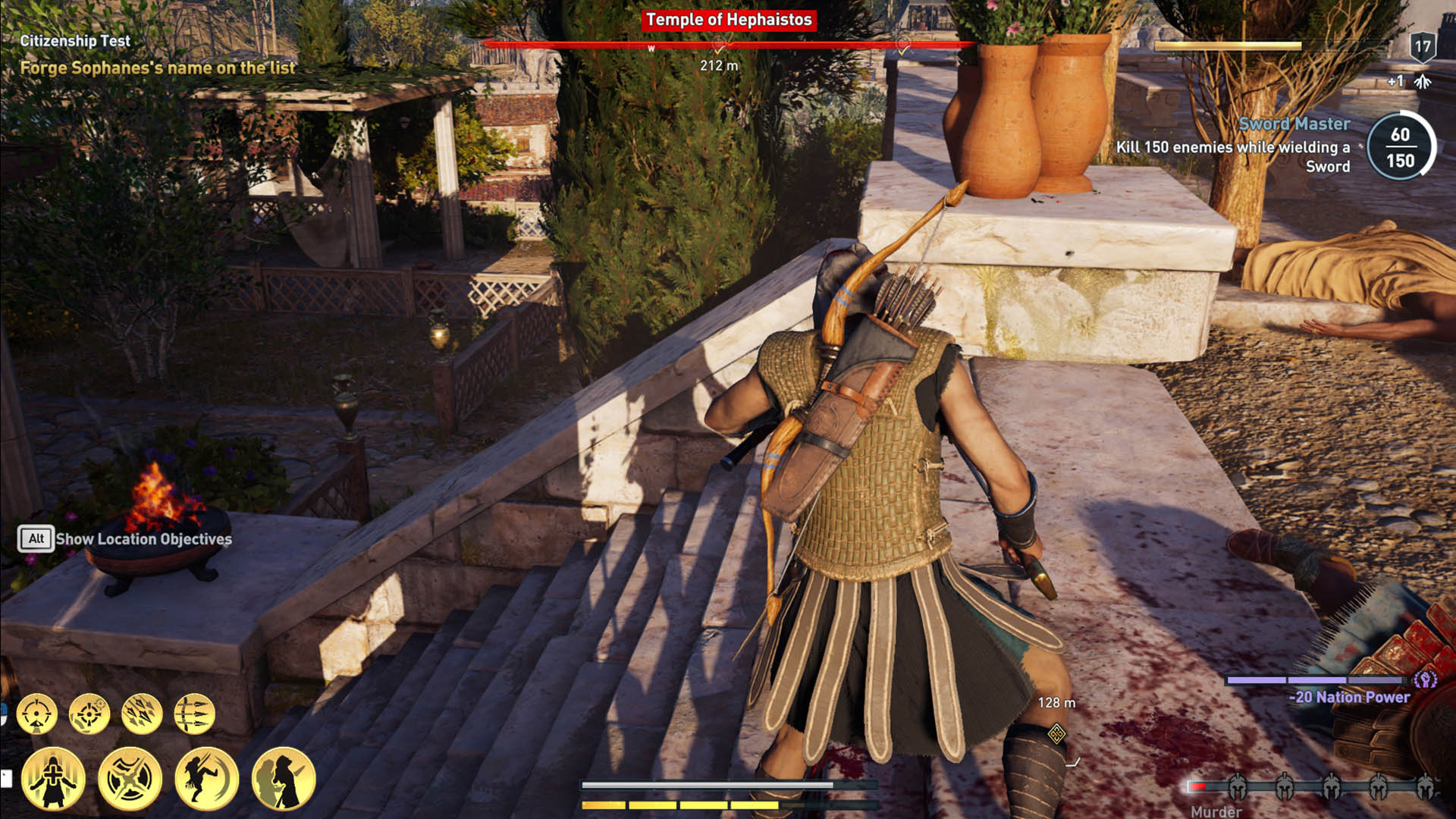 From the very first game, my biggest draw to the Assassin’s Creed series is the historic background and the detailed world-building. Mixing in a bit of sci-fi and the arcane lost precursor civilisation never hurt, but Ubisoft have not always got the balance right. Thankfully, Odyssey uses the Isu, or precursor, relics and structures sparingly. Similarly, with the present-day sequences. Unlike the Desmond-era Assassin’s Creed games which, in my opinion over-did the whole First Civilisation thing, in Odyssey, when you do come across an anomalous structure it is a special moment.

Odyssey follows the same sci-fi narrative as the series has from the start. This time, in the present, Layla Hassan (who was introduced in Origins) has obtained the broken spear of the Spartan King Leonidas (yep, him from 300, Frank Miller/Zack Snyder/Ancient Greece fans). The spear has two sets of DNA on it, a female and a male. Player get a one-time choice to use the male or female DNA with the Animus and experience Greece circa 431 BC as either Alexios or Kassandra.

As with previous Assassin’s Creed titles the title card doesn’t appear at the beginning of the game. It was some three hours in that the “Ubisoft Presents” text appeared. It was after a pivotal scene, and Ubisoft wanted to let me know that the amazing experience that I’d just enjoyed was only the game’s prologue. 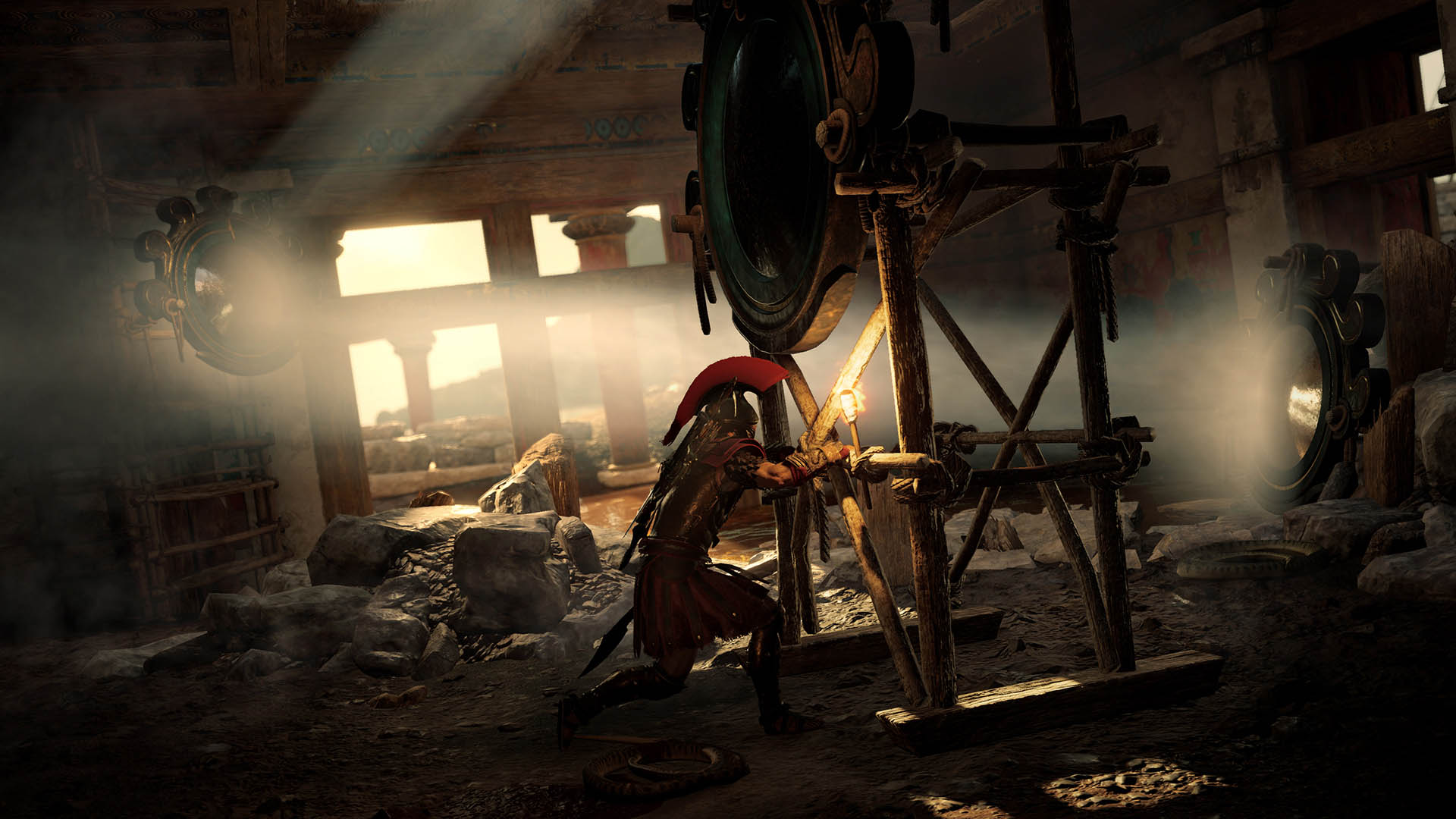 The basic gameplay mechanics are virtually identical to Assassin’s Creed: Origins. I’d say that half of that two-year gap between Assassin’s Creed Syndicate and Origins was spent re-building the game engine. With the superior tool-kit now available to them and multiple development studios around the world, it’s easy to see how Ubisoft have provided us with this top-class sequel in just a year after the last epic instalment.

It is almost too similar to last year’s game. On one hand, don’t fix what’s not broken, but, on the other hand, the cynic in me wouldn’t find it too hard to declare Assassin’s Creed Odyssey more of a total conversion or expansion to Origins.

Being fair, though, for Odyssey, Ubisoft have introduced a few new game mechanics.

The RPG elements have been increased this year. Player can choose to either be fed the location of each quest as in previous games, or naturally happen upon them using exploration mode- which is the developer’s intended way to play the game.

The game is set during The Peloponnesian War, with the nation-states of Athens and Sparta at war with one another. Players get to fight in huge battles on the side of Athens or Sparta. There’s also a bounty system that sees mercenaries hunting players. You can either pay off the bounty, defend yourself against the mercenaries, if they find you, or kill the person sponsoring the hit on you. Players also get to weaken the area’s government by destroying supplies and murdering the local leaders. 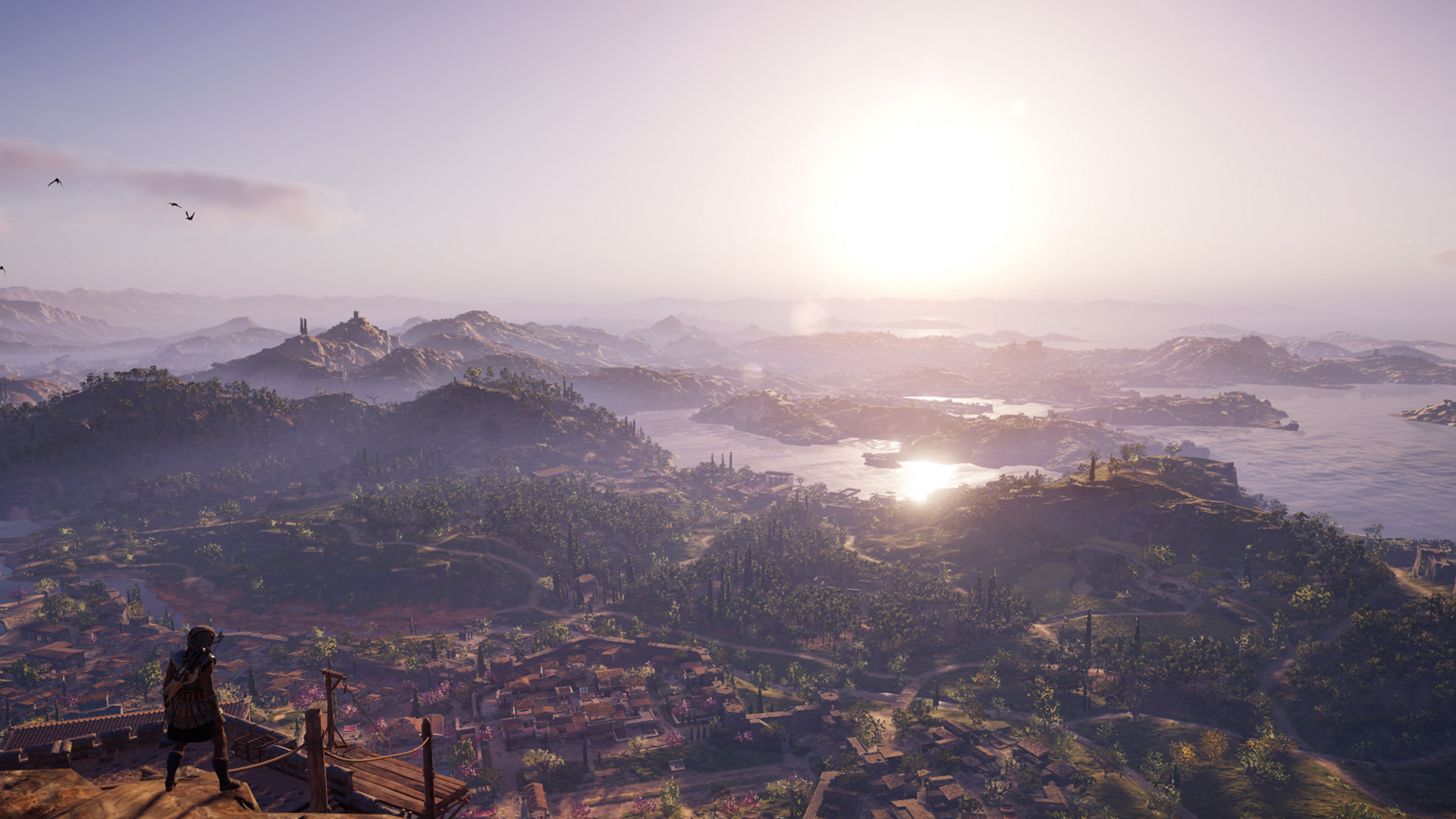 Throughout Greece are spread members of the sinister Cult of Kosmos. The cult seeks out the ancient artifacts of the First Civilization. The Cult of Kosmos’ aim, as with their later incarnations as the Order of the Ancients and the Templar Order, is to use the artifacts to control the populace and create order. One of your missions is to seek out and assassinate cult members in order to loot a piece of precursor tech that can be used to upgrade the spear of Leonidas.

A well as the usual skills tree, new armour pieces and weapons can be obtained as quest rewards and as loot. As your character levels up in the game, you can pay a blacksmith to level up your weapons and armour. This means that you can continue to use your favourite gear instead of discarding it. Amour and weapons can also be augmented with buffs such as increased heath, poison effects and extra damage in certain situations.

Another new feature for Odyssey is enemy level scaling. As the player’s character levels up, so do the levels of the NPCs. This means that you will never come across enemies twenty levels lower than you that simply feint at the sight of your sword. It keeps the challenge up, but may annoy player that like to game the level system (someone that I’ve been guilty off, myself). Enemies of a higher level only start scaling as the players level overtakes theirs. 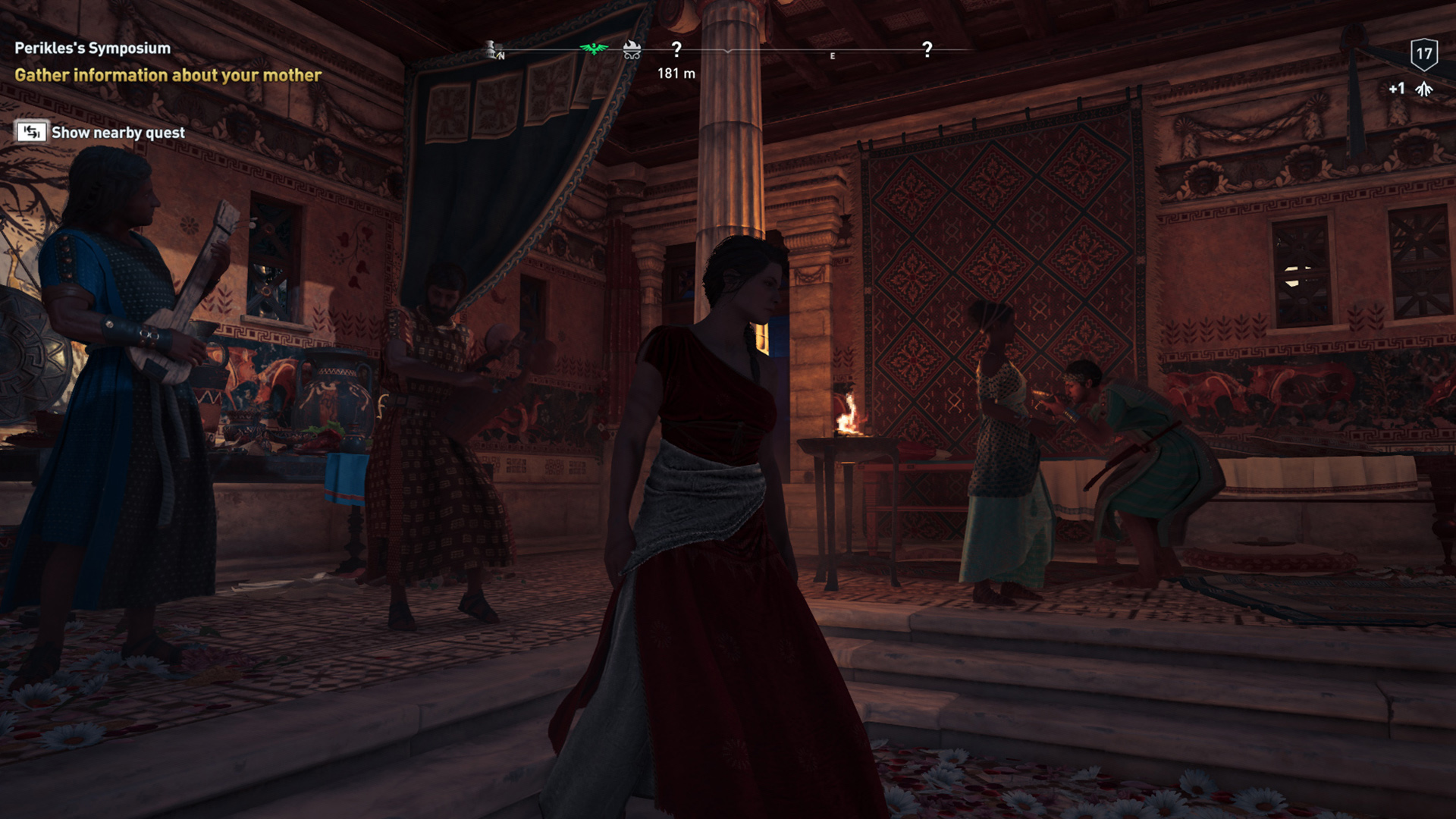 The sheer size and scale of the game is breath-taking. Whilst most Assassin’s Creed games feature an overwhelming amount of content, for Odyssey, Ubisoft have outdone themselves. The Greek world of Assassin’s Creed Odyssey is vast and, without the fast travel system, will take an hour or so in real time to walk across.

Anyone that’s traveled through modern-day Greece will be able to see tourist destinations such as the Acropolis in Athens and Delphi, “the navel” of the world. If you are into your history you are going to fascinated by the detail that has gone into recreating places that are now no more than ruins. To walk the streets of Athens and Sparta in their heyday is worth the price of admission, alone.

Your character isn’t confined to the land. As well as small boats, players can, once again, take command of a significant vessel and take on the Spartan and Athenian navies, as well as pirates. The naval aspect of the game is the best since Assassin’s Creed IV: Black Flag, and engaging other ships is a fun diversion. 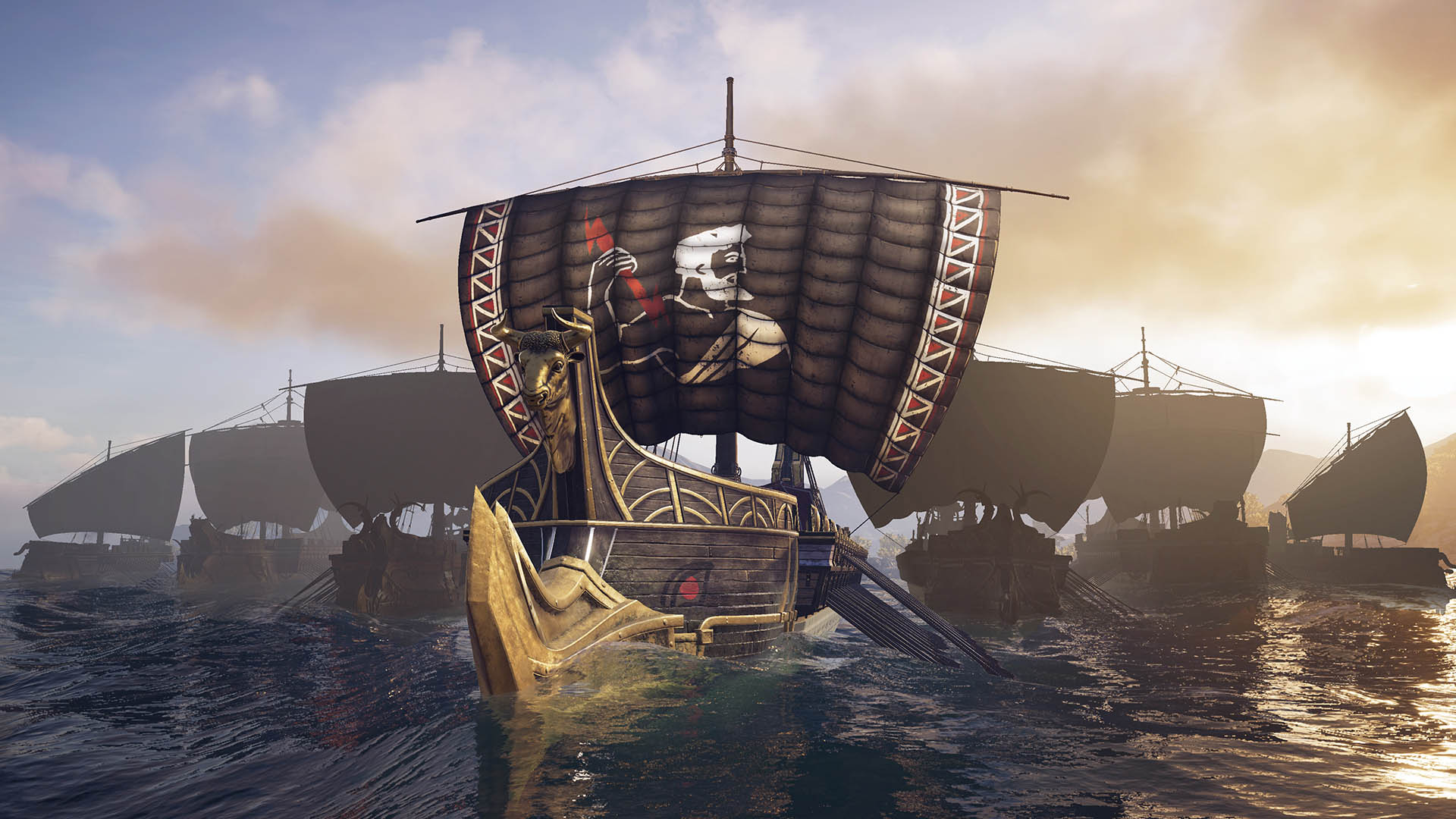 Speaking of Black Flag, the multitude of islands and the epic scale of the Mediterranean game world, as well as the more familiar, romanticised setting in Ancient Greece, gave me a vibe very close to that of Edward Kenway’s adventures. With Black Flag being, in my opinion, a benchmark title in the series, this familiarity is a definite plus.

Assassin’s Creed Odyssey re-cements the franchise as one of gaming’s premier series. The deeper RPG elements, greater emphasis on exploration, naval battles and engaging storyline draw from the successes and failings of the last few games. The result is an Assassin’s Creed game that is absolute joy to play and ridiculously hard to put down.