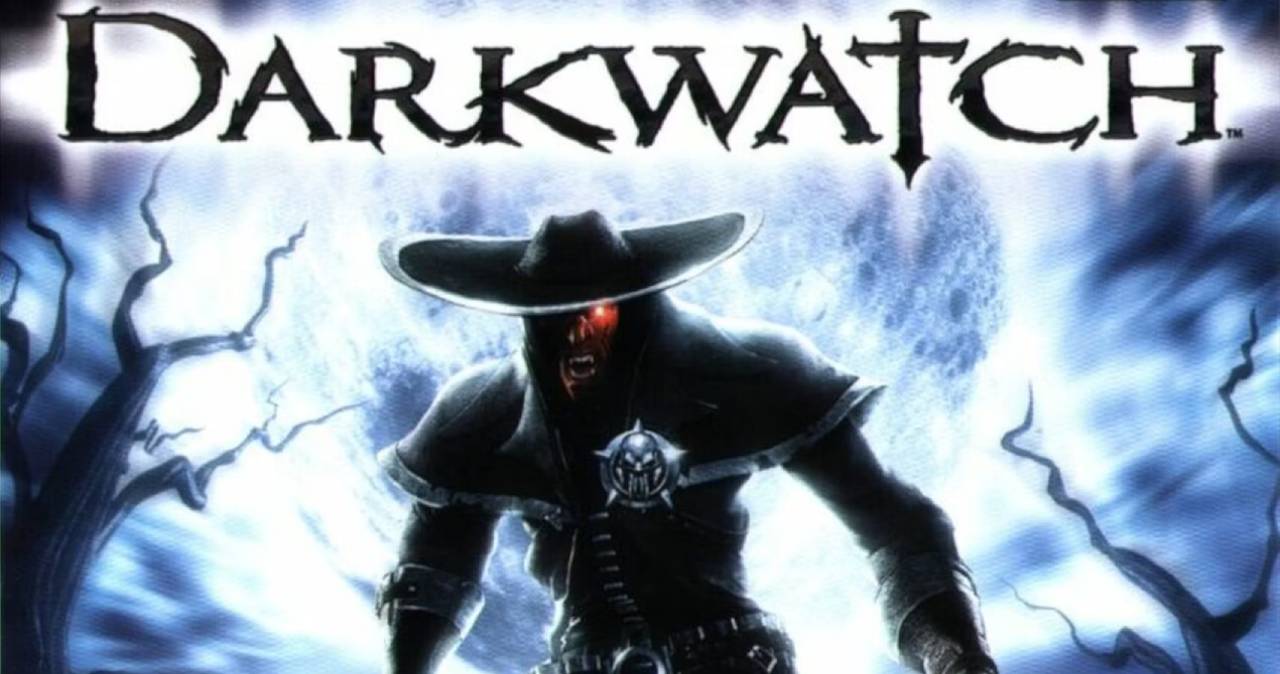 It’s ‘one last job’ for Jericho Cross, but will he survive it?

Skulking through the carriages of the Darkwatch prisoner train, he could have not imagined what he was about to unleash.

The Darkwatch is a secret shadowy society that polices and remands all the evil that they encounter.

Now he makes it to the vault, but upon blowing it open he gets the new life he was wanting from the contents inside, but not as even he could have foreseen.

Darkwatch is a horror / western game, and probably the only one to have both themes intermingled. 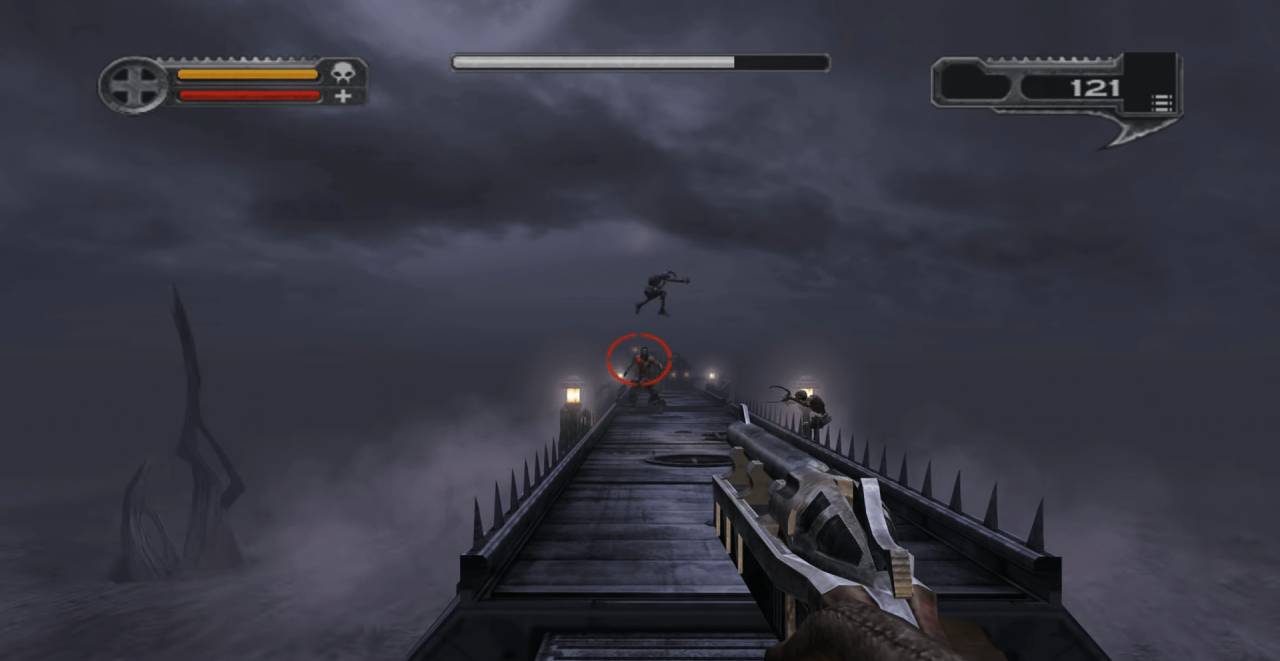 Throughout gameplay players are faced with choices on Jericho’s fate. As he battles the bloodlust hunger you can decide to work with alongside the Darkwatch for whom you get enlisted to and use your ever evolving Vampire powers for good, or feed yourself on the souls and blood of those who he saves and beg for your mercy. 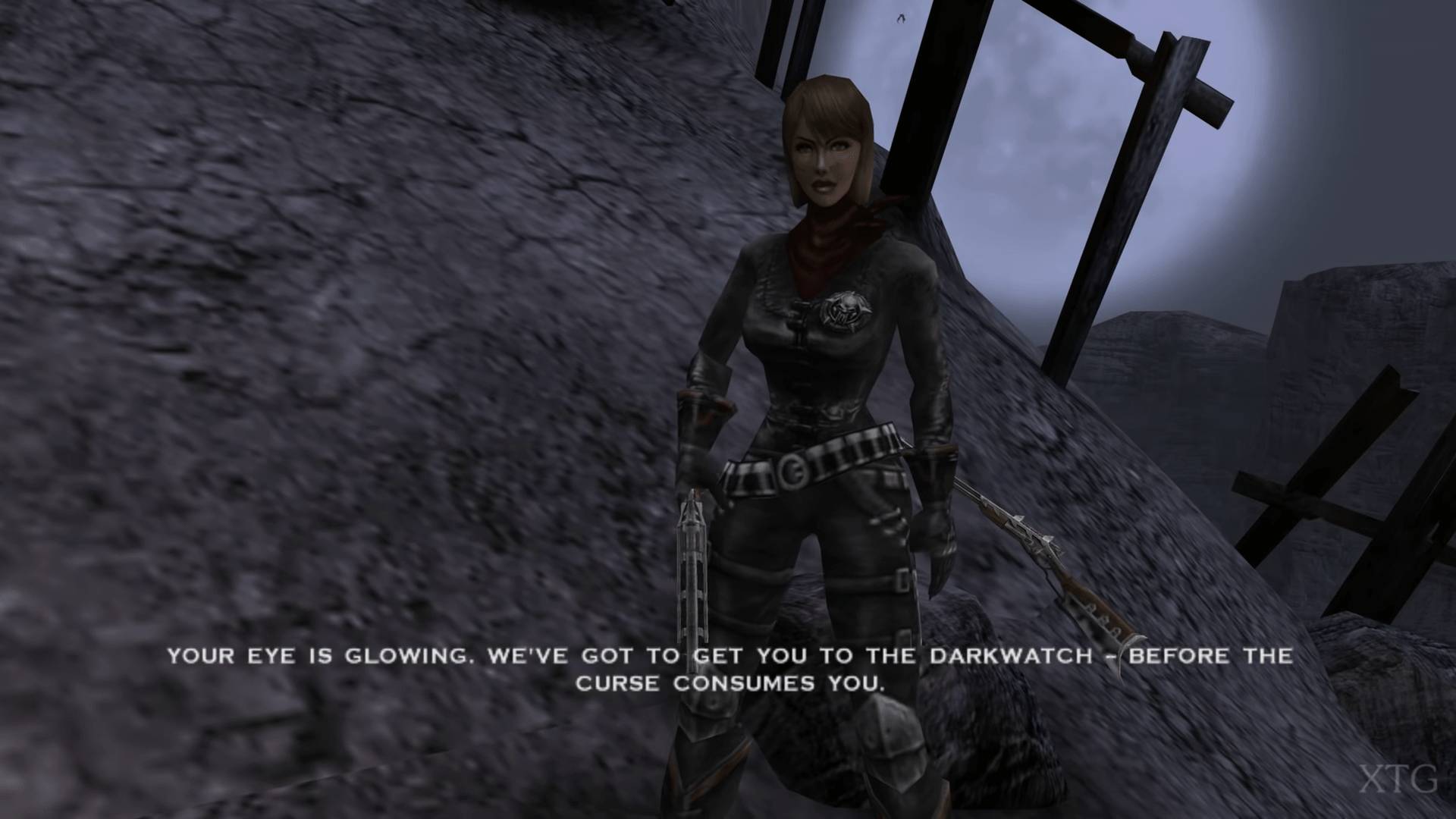 As with any law-enforcement officer you will find his duties from balancing justice, to just outright mayhem and gore. With this secretive society there are three main different levels of Judgment and these lead to pivotal ‘Judgment Events’ against Bosses. Ultimately however it does all come down to good or evil and what path you decide for Jericho, which affects the outcome of the game.

It all rests on your shoulders.

The most coveted enemy by Darkwatch was in that vault, Lazarus a supreme Vampire.
It was he who escaped from the TNT explosion in the train and infected Jericho with the blood hunger that now consumes him. 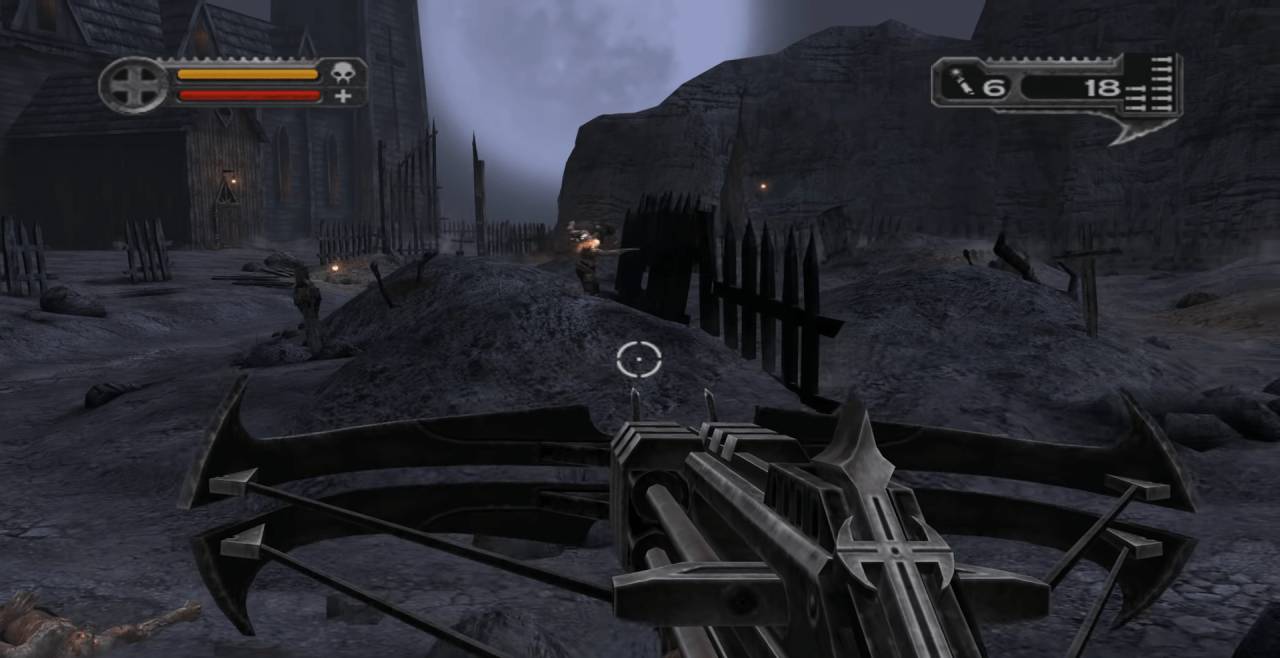 The being that is Lazarus is truly impressive, and you will fight him in level specific intervals, from first person to third person on horseback. Jericho also has a go at a steam powered, gun wielding vehicle.

Other enemies include hordes of Skeletal ‘Spaghetti-Western’ Cowboys, ‘Keggers’ which are skeletal beings with explosive suicidal tendencies (these are quite amusing),  Siren Banshees dressed in their Saloon-Girl best with a shriek to make your ears bleed, back from the dead Snipers, projectile vomiting beasts and more.

The weapon choice in this one is excellent, varied and mostly fitting with the theme. The six-barrel, single shot-carbines, dual pistols, dynamite, Sniper Rifle, shotguns and even a rocket launcher (I’m pretty sure Cowboys did not have these when the West was won). 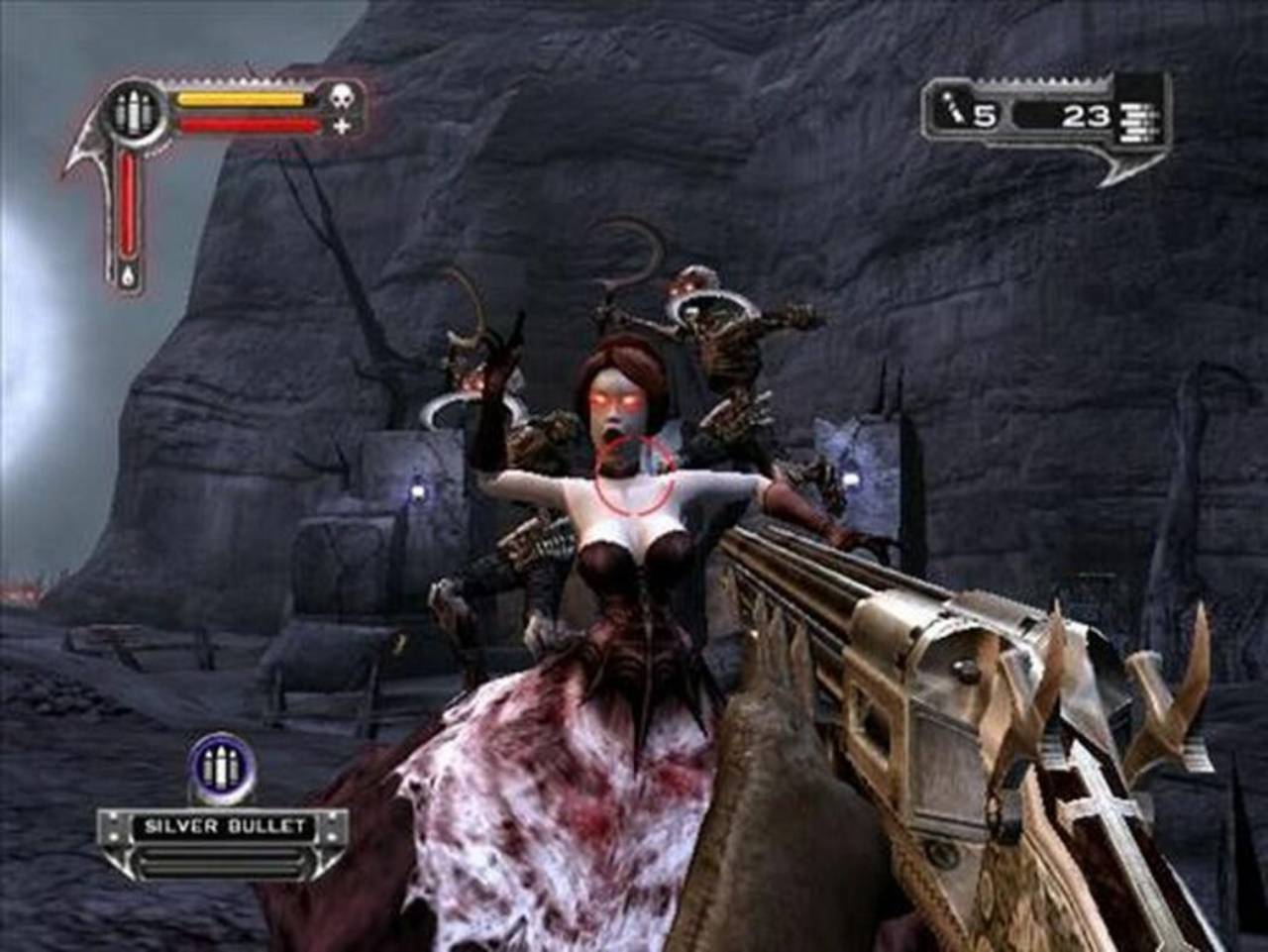 Melee weapons are also available, if you want that personal touch. Hand, knife and the butt of your rifle or shotgun are always effective.

You also gain the ability of harnessing lightening as a defense when surrounded and the ‘Lazarus’ jump, where you can leap vast distances and descend in a floating manner. True in first person perspective this is not fully appreciated, only when you wish to reach an area otherwise unobtainable.

As you are slowly transforming into a fully fledged Vampire, Jericho’s health will constantly recharge, known as a ‘Blood Shield’. You can alternatively suck the life from the living which gives your perhaps dwindling health bar a Mega boost. 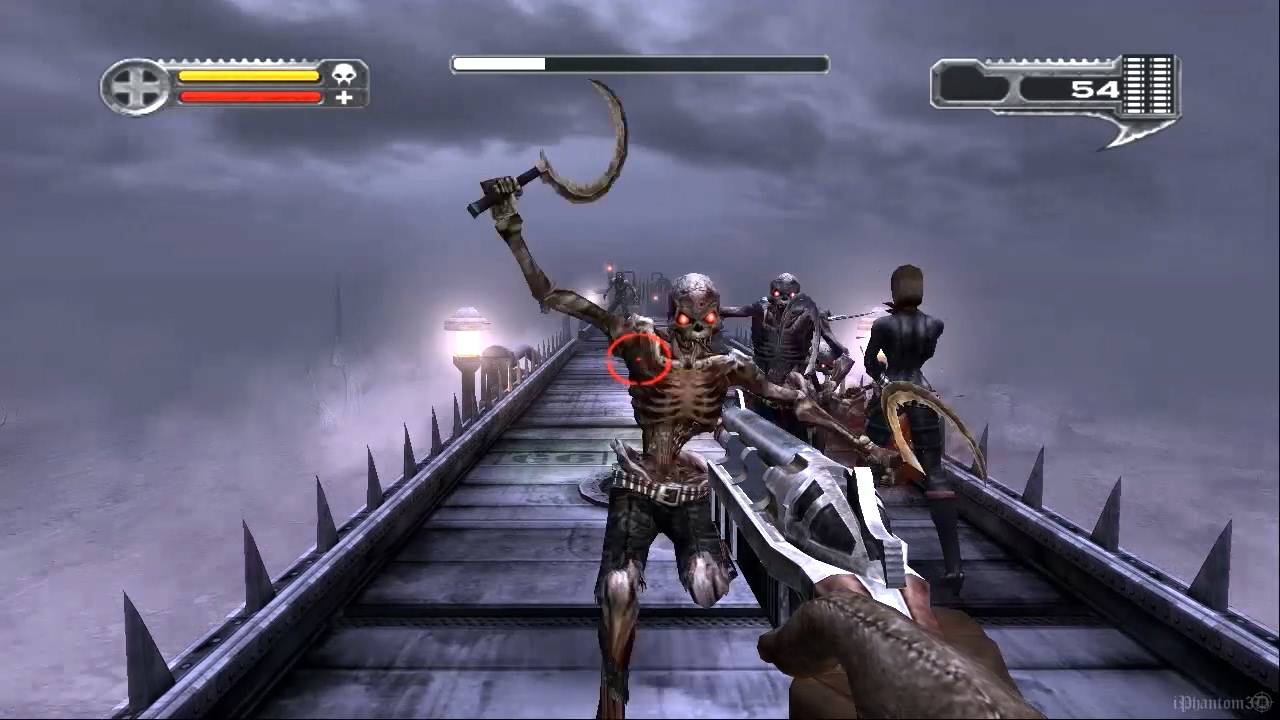 Not particularly a fan of first person, this game had me putting my bias, reserved opinion aside from the start.
I first stumbled across this title over the internet, and while the horror aspect had me interested as soon as I realized it was being coined as a first person my interest waned.

How wrong and shamefully judgmental I was.

It is damn easy to get the feel of the game and after a while (if you are used to third person view as I am) the first person perspective becomes as comfortable as your favourite pair of undies.

Graphically (on either console) it is detailed and indepth and gives a feeling of midnight eeriness.

Online play on the Xbox supporting upto 16 gamers with modes; Death Match, Capture the Flag, Soul Hunter and more, but not PS2. To compensate the PS2 version has an exclusive mission, the War Train and offers co-op mode and a ‘Splitter Grenade’ weapon.

Styled much like a hunter game, it is unique, dark with a sprinkle of evil humour and whether you play first person shooters or not, this will capture you. 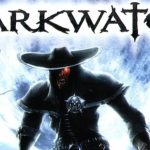