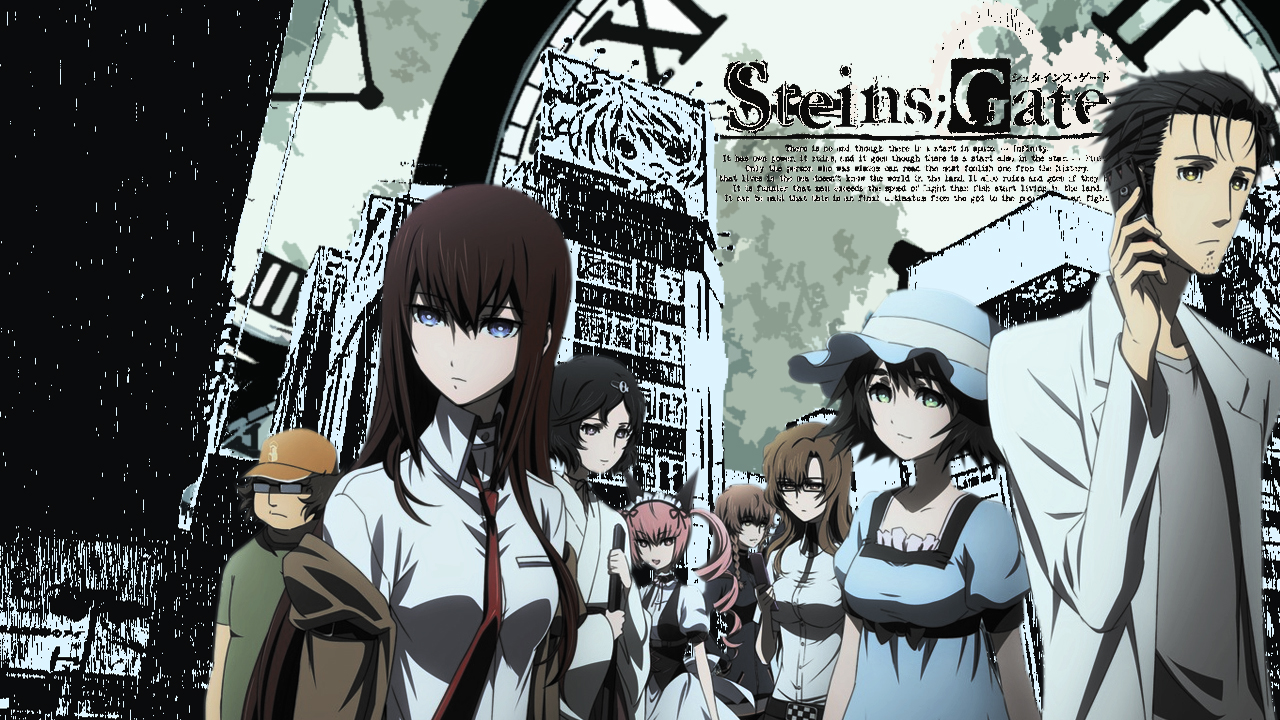 Steins;Gate is a critically acclaimed anime adaptation of a popular Japanese visual novel and video game. Directed by Hiroshi Hamasaki and Takuya Sato, Steins;Gate first released on Japanese screens in 2011 and has since been licensed for release on Blu-ray and DVD by Madman Entertainment here in the Australia and New Zealand region.

The events of Steins;Gate take place in Tokyo, when Rintaro Okabe, a slightly eccentric ‘mad scientist’ who runs a lab known as the Future Gadget Laboratory, unwittingly changes the course of history when he sends a text message upon finding Kurisu Makise, one of Japan’s leading female scientists, dead in a pool of her own blood. 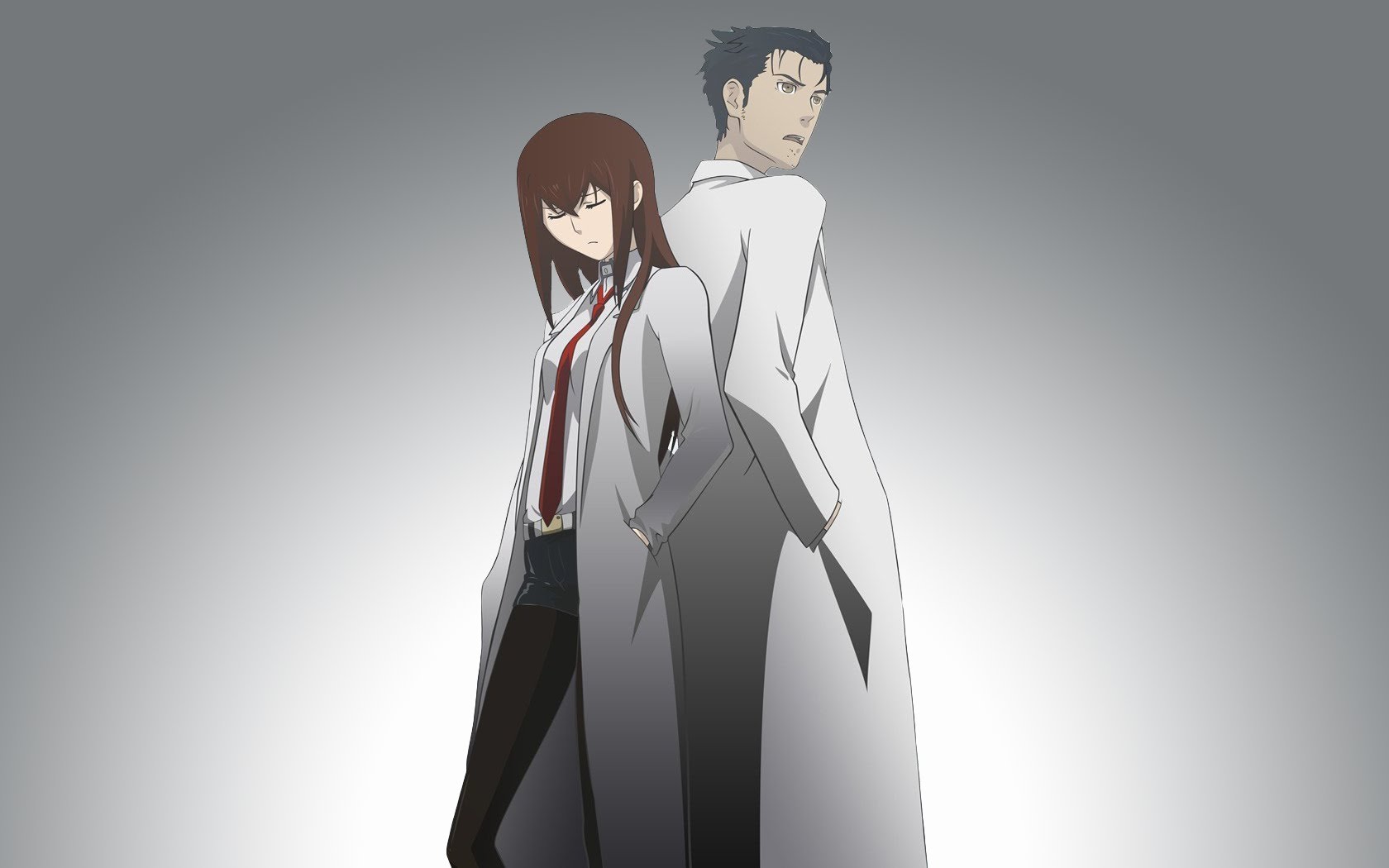 Upon experiencing a rather strange phenomenon and discovering that not only was Kurisu alive and well but that his text message was received a week before he sent it, Okabe concludes that the microwave that his Future Gadget team have been developing works as a time machine, able to send texts to the past. This crucial discovery results in the anime’s main plot, consisting of time leaping, changing world lines and the desperate actions one would take to save a loved one from the inevitable.

The story and narrative of Steins;Gate is exceptionally well researched and written, with great detail added to create a believable account of time travel and the often catastrophic changes that come with it. Not usually a fan of complicated time travel/science fiction tales, I found the narrative slow to begin with and was  ready to give up, finding Okabe’s mad scientist speeches and behaviour annoying and off-putting. 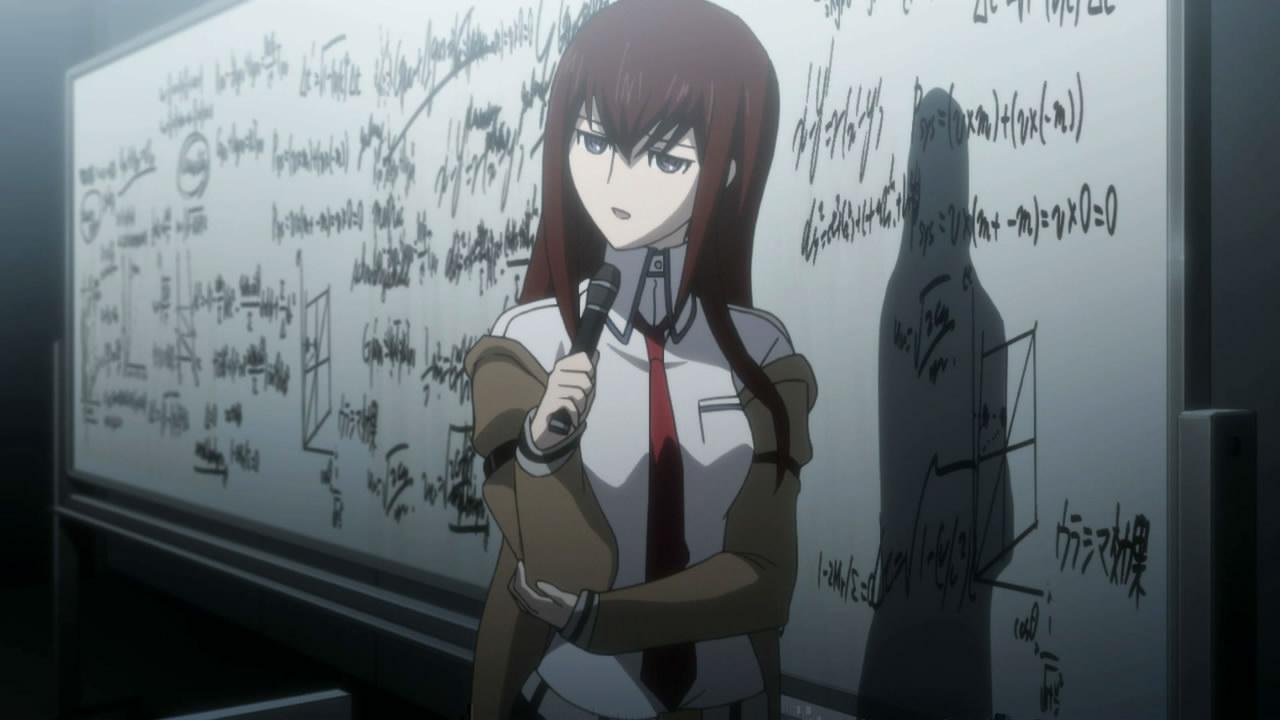 However, the narrative did incite a bit of curiosity in me as I wondered in which direction this anime was headed. Sitting through a good 12 or so episodes, I was introduced, rather thoroughly to each and every character important to Steins;Gate‘s narrative. While this was a slow build into the crux of Steins;Gate, I appreciated the solid character development and ‘world building’ that was done in the first few episodes. It proved refreshing for an anime series to have characters that progressed throughout the anime.

What hooked me though, is the episodes following the build up. These episodes were full of mystery, fast paced and superbly gripping that I couldn’t stop watching. The plot thickened speedily with twists and turns around every corner. No anime, apart from Death Note, has been quite as riveting and enthralling as Steins;Gate has proved itself to be. Not only will you find yourself questioning everything you know about space and time and all its possibilities, but each episode ends in a way that leaves you in a slightly agitated state of emotional suspense. 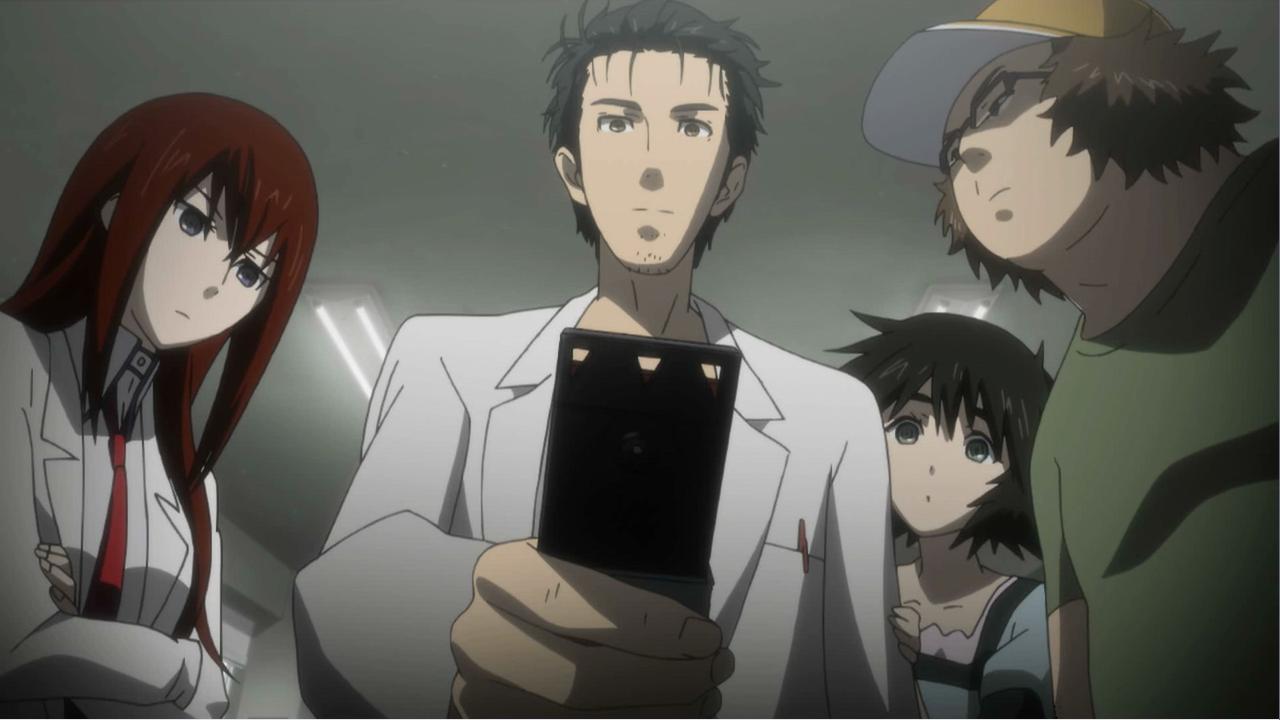 While a well written narrative is crucial to driving a series forward, the characters involved also play an important role. Oftentimes a character’s personality, life story and struggles are what help pull viewers into a series, as they feel a sort of kinship and familiarity with a character, whose motivations are similar to that of the viewer’s. Each character of Steins;Gate had an important part to play and each with their own personalities, idiosyncrasies and inner turmoil. The bonds between each character and their inner struggles, especially Suzuha (another character who becomes important in Steins;Gate) and Okabe’s emotional pain, tug at my heartstrings and made me really and truly ‘feel’ for them.

Of course, the emotional pull is never as strong as when there are affairs of the heart involved along with a soul moving soundtrack to carry the emotions and build each scene. Steins;Gate has one of the most soothing and inspiring soundtracks that I’ve heard in a long time. It set the tone for the anime, from the science fiction themes to the more poignant moments in each episode. The music only added to the sheer magnificence of the entire anime. 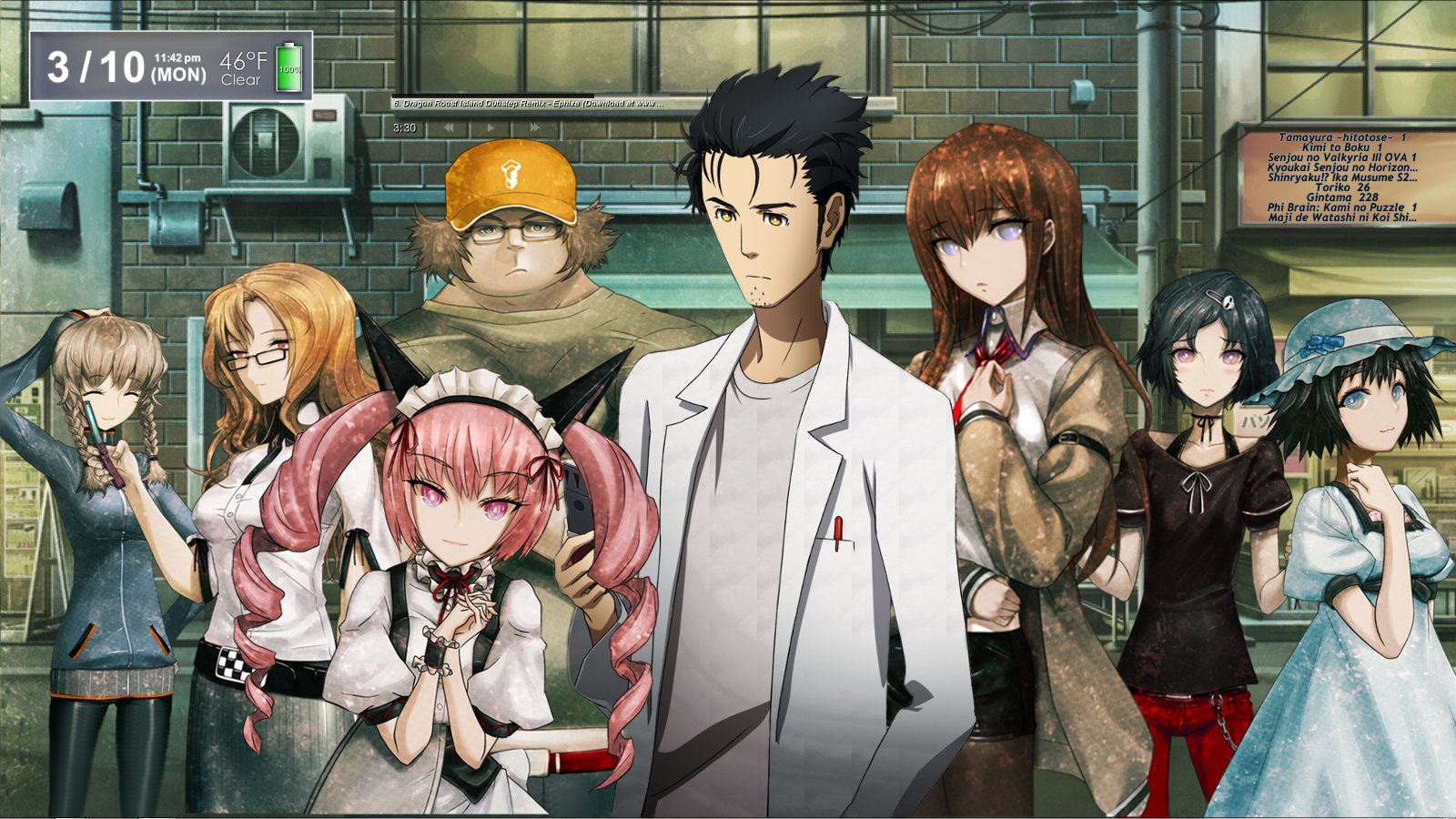 As for the science fiction and time travel aspects of Steins;Gate, this was portrayed well, utilising fantastic artwork and visuals. Future gadgets that Daru put together looked realistic and believable as is the entire city of Tokyo in Steins;Gate. There are moments where the visuals were rather graphic and were slightly off-putting but it was nothing too major that I had to forcibly look away. The character designs suited the anime for its genre and kind. Each of the characters appeared to be normal and not disproportionate (unlike some other anime which tend to indulge too much, particularly in the chest area of female characters).

Steins;Gate is one anime that I would, without a moment of hesitation, recommend to anyone and everyone interested in getting into anime. Steins;Gate is sensational and by far one of the most thrilling works I have come across. Not only do I give Steins;Gate a rating of 10/10 but recognised anime review sites such as Anime News Network and THEM Anime Reviews give Steins;Gate a solid A- and 5/5 rating respectively, with others citing the anime as brilliant, fantastically imaginative, fun and a thrilling mystery piece. I highly recommend this anime and cannot praise it enough.