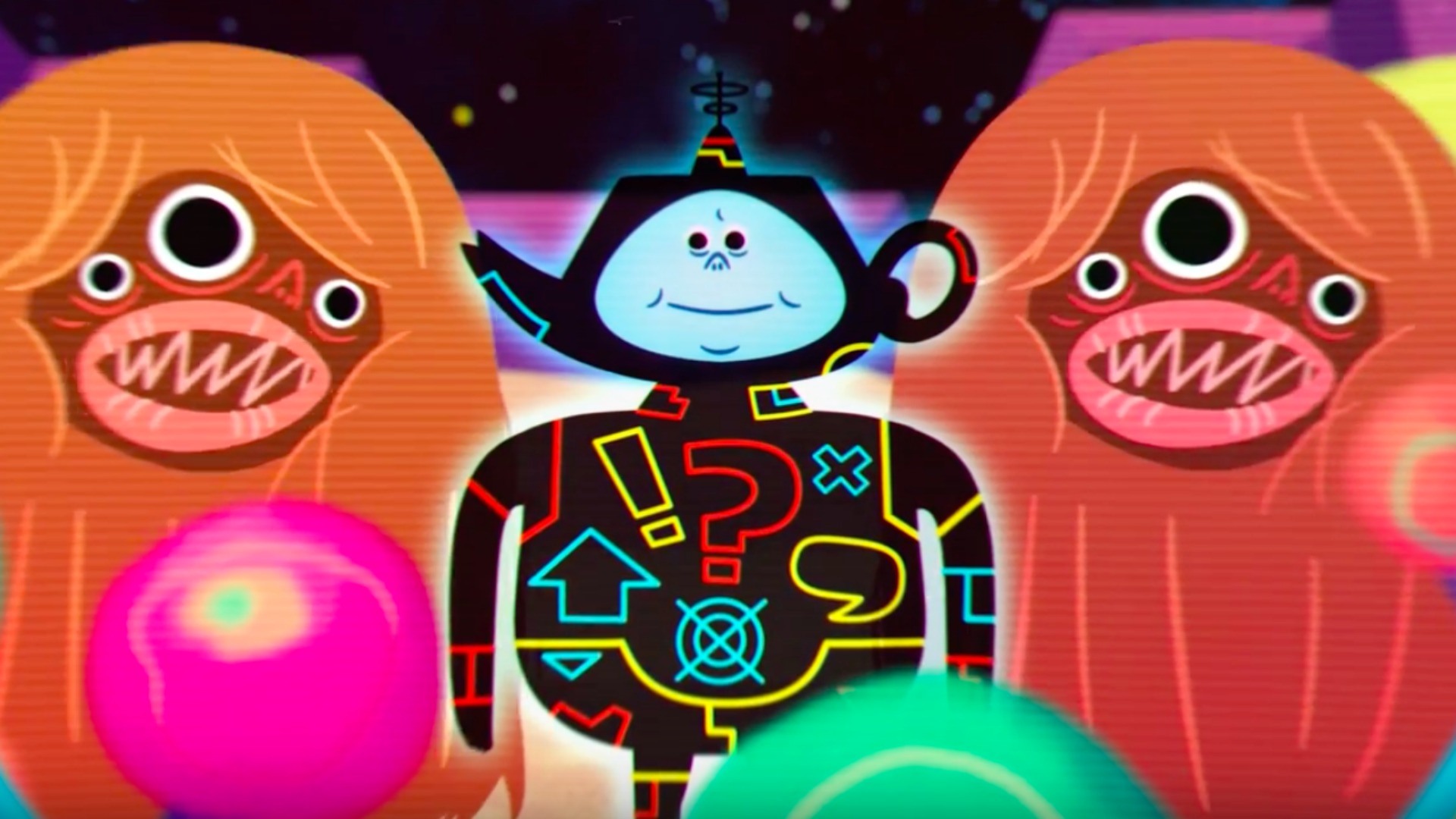 Over the last few years I have seen permadeath become more common, regularly with procedural generated worlds and Levels, to the point where I couldn’t see how it would be used in a new or interesting way.  But that’s because the games I played kept being isometric survival games or sidescroling shooters.  Now Loot Rascals has come along to bring these elements to a strategy game in a way that not only works, but excels.

Loot Rascals starts with your character flying through space on a rocket being guided by a weird teapot headed character with a thick Scottish accent when you crash land in a strange place.  Your character then needs to go ahead and find something called the liquid anything, contained in Big Barry.  The story is silly and didn’t appeal at all, but there is very little of it getting in the way of the fun of this weird game in all its glory. 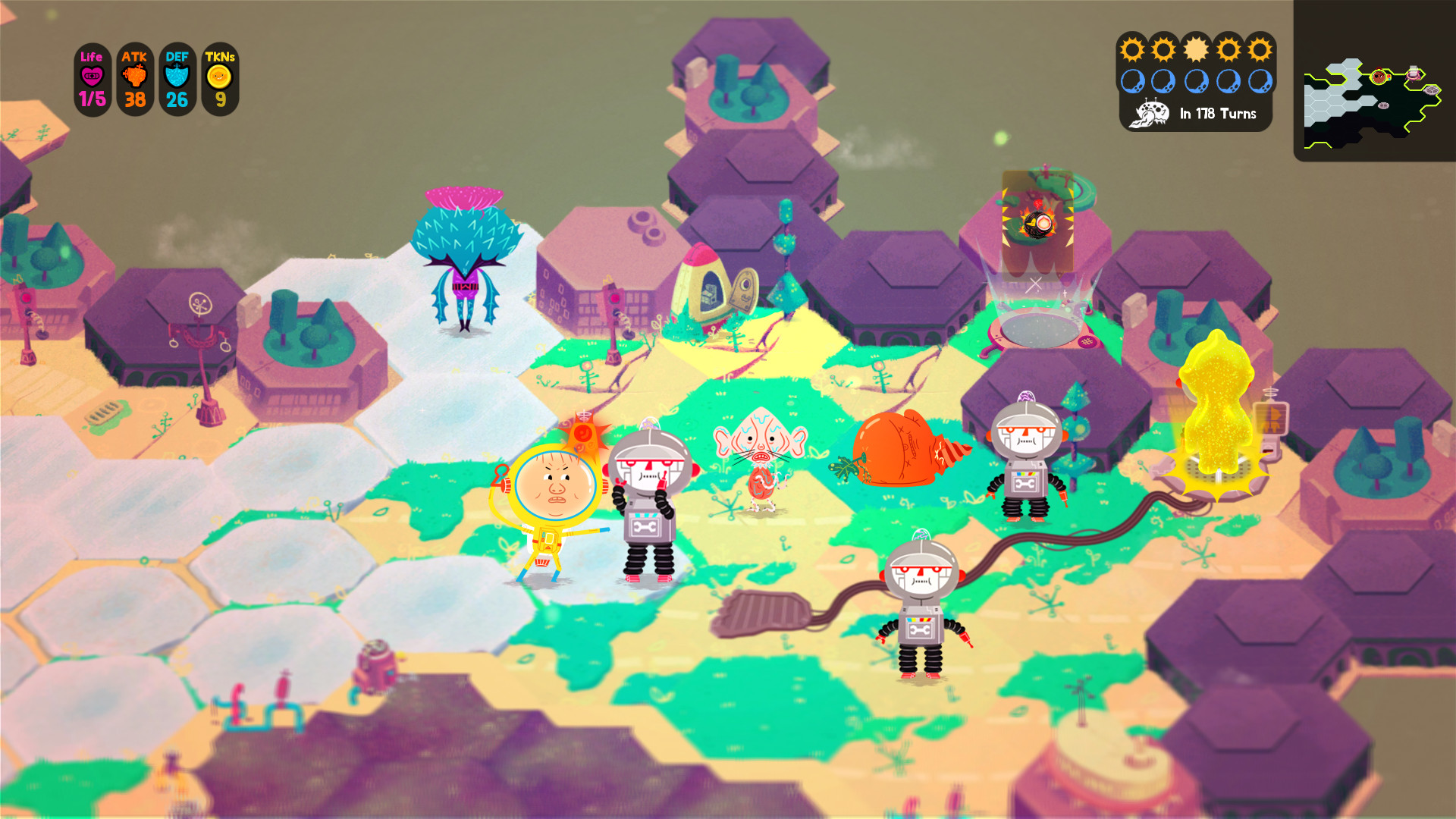 The gameplay is what is truly special about Loot Rascals.  It’s a turn based strategy game on a hexagonal grid, where every time you move a space, every enemy also gets to move.  The grid’s cells are hidden until you get closer, exposing a wall, space or another enemy and when you land on the same cell as an enemy a battle ensues.  You don’t fight the battle; you watch it take place until after a second or two a victor emerges.  You figure this out based on your attack and the enemies defence, or vice versa.

This is where one of the gameplay elements kicks in, the day night cycle.  Each time you have a turn the timer in the top right moves a space through either the day or the night and every five moves it changes to either day or night.  When this happens the stats of your enemy switch from attack to defence, or vice versa, which changes the battle.  When you and an enemy battle, if they are on attack they attack first itcan have a significant advantage.  Your health is never very big so attacking first can be very important as every attack the enemy lands is brutal.  But with a high enough attack stat and attacking when they are in the right stage, you can mitigate this risk regularly. 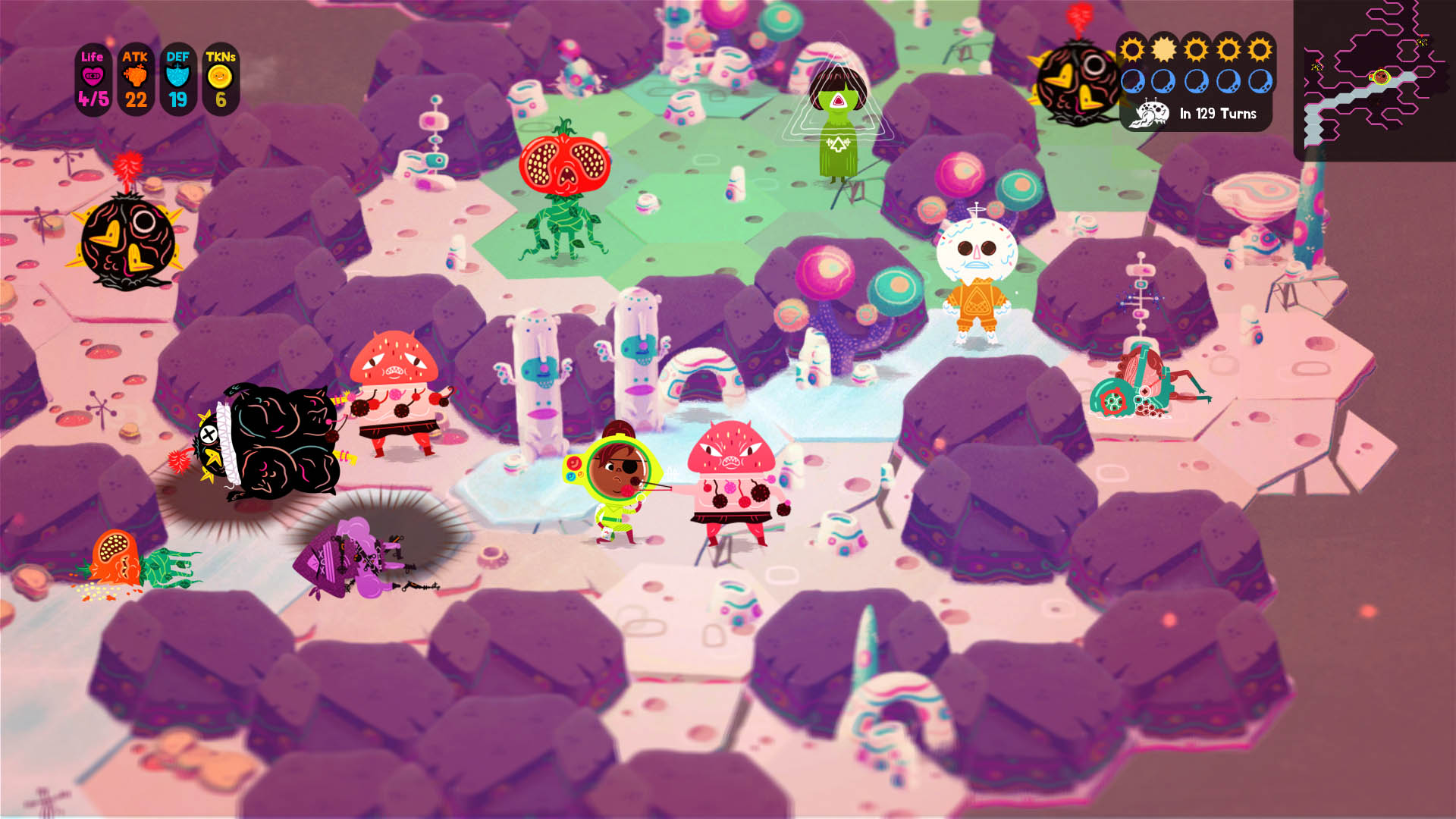 Then comes the way the stats are formed which is using a card game series of mechanics.  Basically, you start with cards spread out in your inventory, some giving attack stats, some defence stats.  As you beat enemies some drop cards. These can have higher stats which are worth placing and some have bonuses or negative effects such as placing it in an even or odd location adds one or subtracts one from the stat.  In addition to this cards placed to the left get an extra stat point.  This strange implementation of card game elements is unique, surprisingly interesting and makes a real difference to the game.  There are also cards which add special moves which you place on another card,adding the effect to that card, such as a heal move, a special attack, or even teleporting.  These special moves get used, then charge back up after a set number of moves.

You can heal by returning to your base and destroying some cards for tokens to use for healing. This does become inefficient quickly as it requires more tokens each time and the further you travel from your base, the longer it takes to return, resulting in wasted turns.  These wasted turns are important as there is also a timer ticking down and every time it hits zero more powerful enemies spawn on the map making the game immensely harder.  After being slaughtered by them a few times you will try to make every move count. 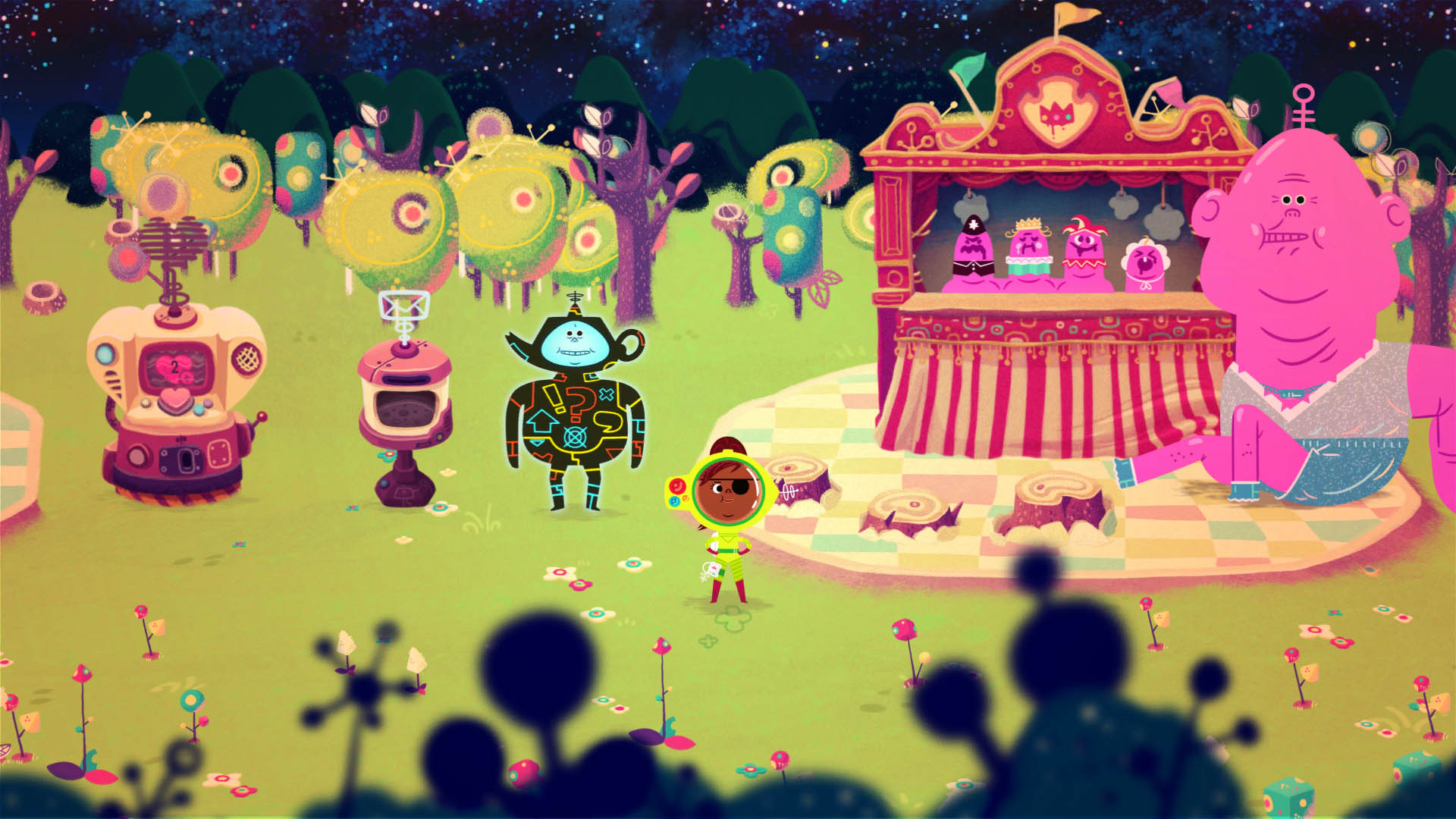 The aesthetic style is also quirky and unique which may either draw in or turn off a crowd.  The designs of characters, the sets and the enemies look very much like a kids Saturday morning cartoon.  I appreciated how well the animations had been put together, the style didn’t click with me at all, though I can see others loving it.

Despite not liking the visual style it takes very little time to get over that and enjoy the outstanding gameplay, so for people on the fence being put off by the design choices I recommend looking past it.  The merging of this well designed, procedurally generated turn based tactical game as well as the card lot system makes Loot Rascals a unique experience that can kill a lot of time as an addictive and fun game.