Journey to the Savage Planet (PC / Xbox One) Review 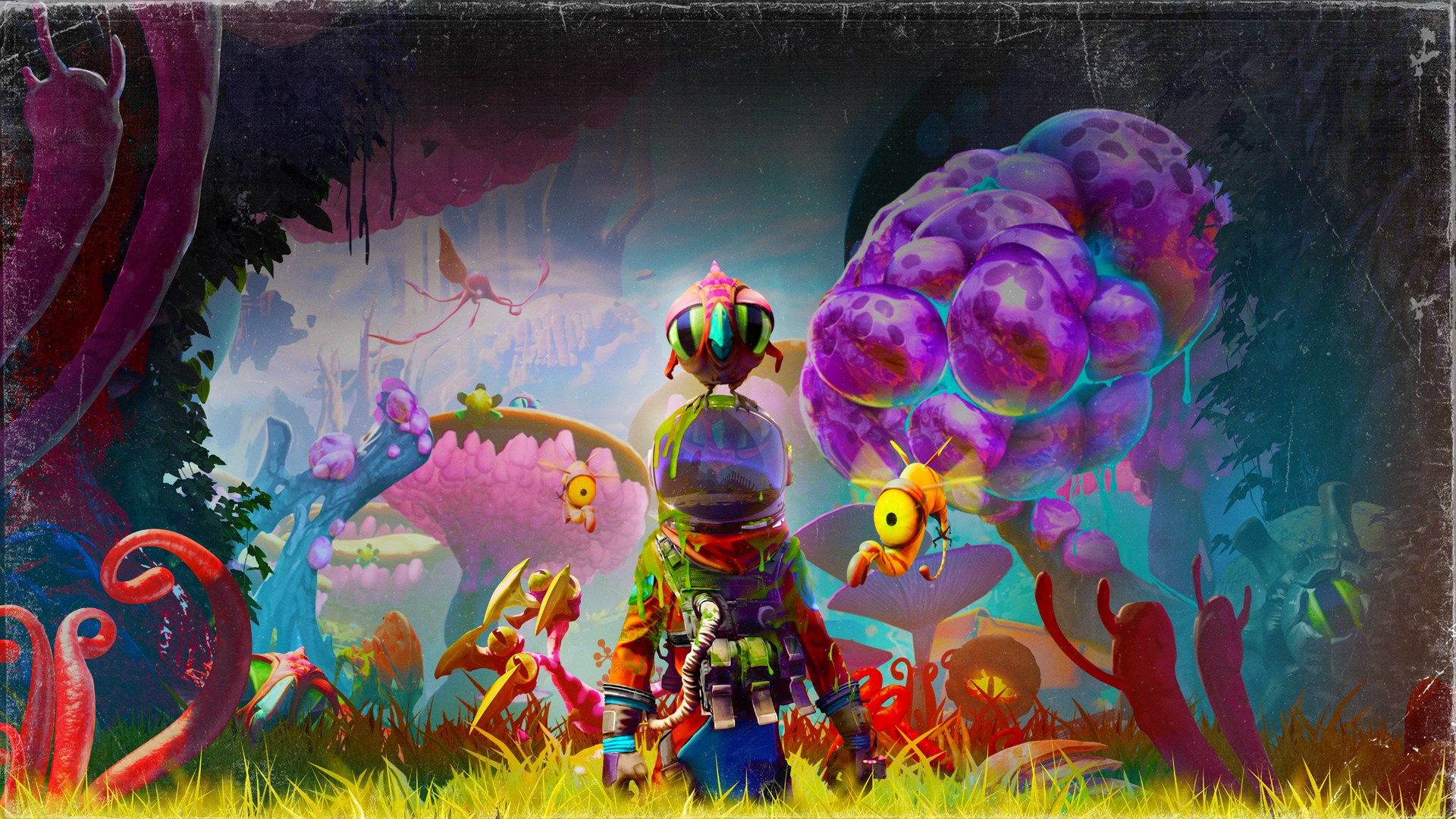 No Mans Sky, that was my first thought as Journey to the Savage Planet started up; there are definitely artistic similarities between Hello Games’ space survival game. Then, as I started exploring, trying to repair my ship, I thought Outer World; both games share the same sort of humour.

In truth, though, Typhoon Studio’s Journey to the Savage Planet doesn’t play like either of those other space exploration games.

For starters, the game is designed to be played co-op. Well, actually, it caters for co-op. Solo play is not a problem, either, but the extra help from a friend is appreciated. 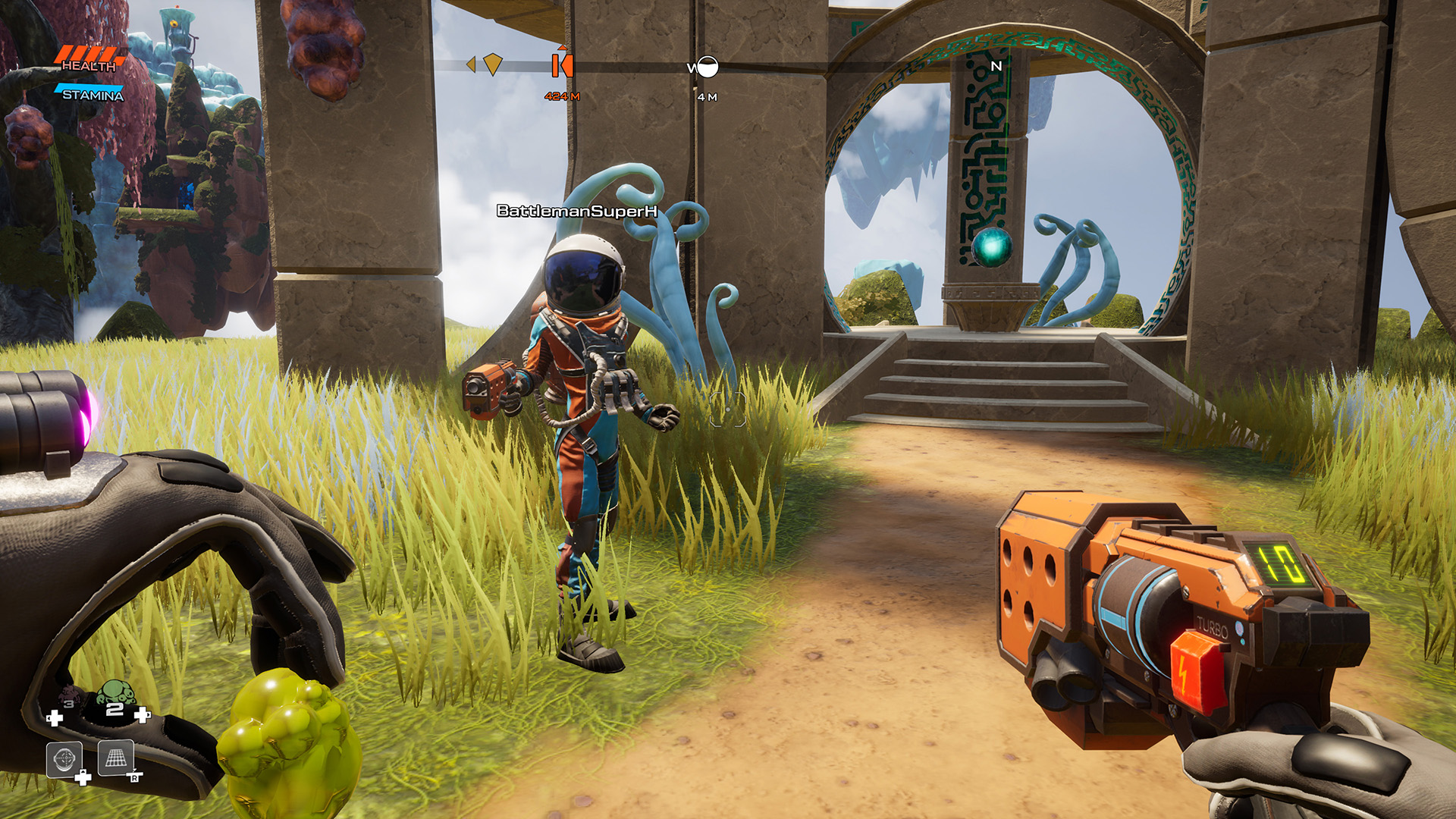 As an employee of Kindred Aerospace, the fourth best interstellar exploration company, you are sent to Planet AY-Y 26 to survey and document the planet. You are briefed my the rather insane company CEO via live action videos. When landing on the planet your spaceship is damaged. If you are to get home the ship needs to be repaired and fuel needs to be found.

It’s an adventure game that has it’s tongue firmly in its cheek. From the sarcastic ship’s computer to the wacky videos on the ship’s screens and on to the planet itself, bursting with colour and diversity there’s a certain whimsy to it all. The designers have had a lot of fun with the planet’s flora and fauna. From psychedelic plants to bug-eyed, farting animals this savage planet is most definitely weird. 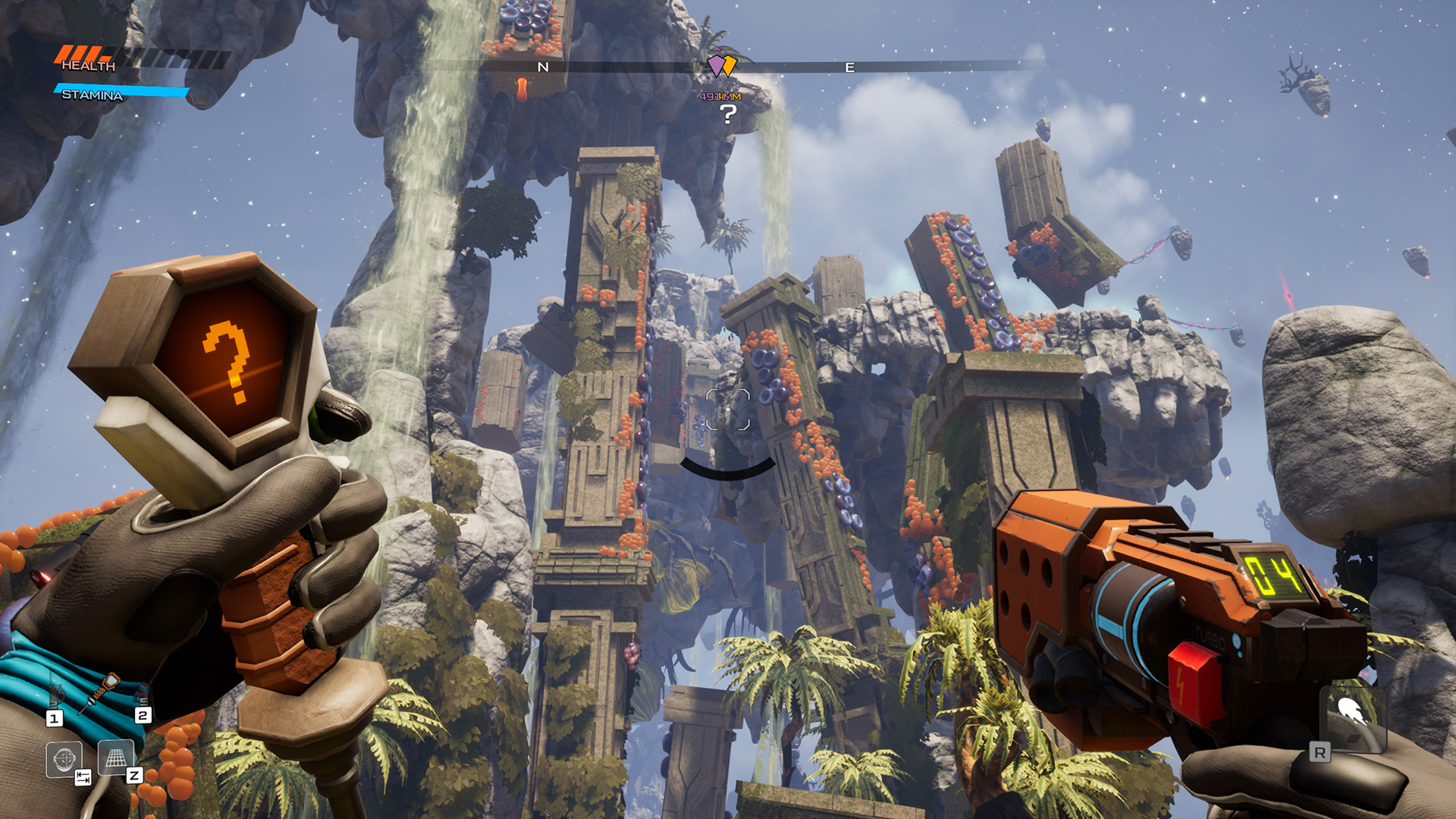 Who can resist a bit of a guilty titter, slapping a local chicken-thing that looks like an escapee from Angry Birds. That titter turned into a guffaw when I discovered I could also give the innocent, doe-eyed local poultry a good kick into the air, as well. Kicking a fluffy rotund bird into a conveniently-placed mincer also proved a bit too hard to resist. PETA approved, Journey to the Savage Planet is not.

Your ship’s AI directs cartographer drones around the planet to find items required to upgrade your equipment via the ship’s onboard 3D printer. This is a neat way of pacing the game as better equipment such as a jetpack and grapple unlock areas previously unreachable. The environment is dotted with teleports to enable fast travel.

The levels are ingeniously designed with a heavy emphasis on vertical gameplay. There’s combat as well, but overall, it’s all about exploring and finding the items required to complete missions. It’s a fairly mellow game, but it’s not, however, afraid to punish players.

Expect to die regularly with a new clone reappearing back on your ship. 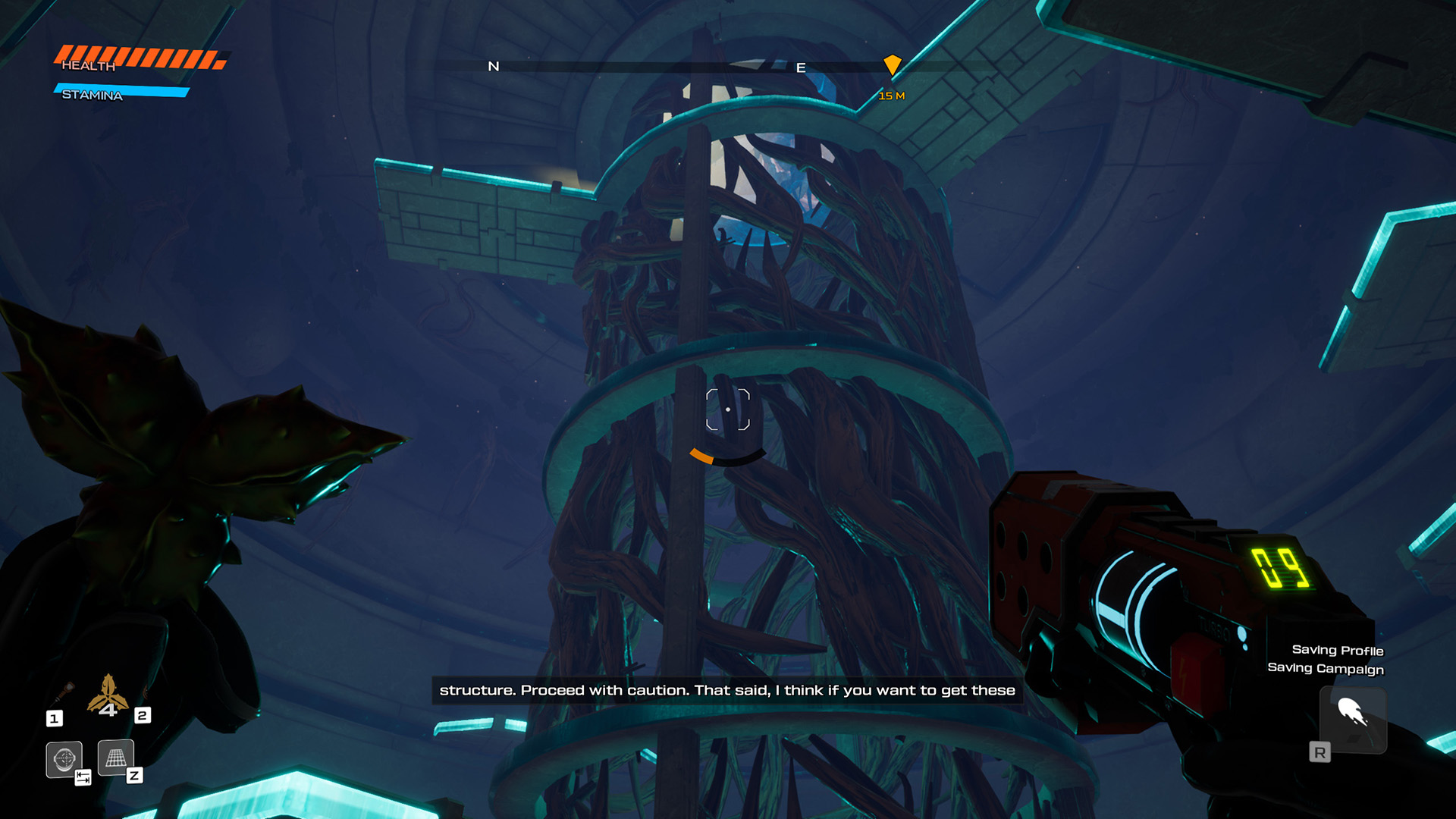 Shooting stuff allows you to collect the raw materials needed to construct your unlocked equipment blueprints. If you die, you need to go collect it.Not only do you have to listen to the ship AI’s sarcasm each time you die, you also have to collect your loot near were you died. Players are free to explore the planet as they see fit, collecting resources and depositing them back in the ship.

Following the main quest line is necessary to unlock blueprints for equipment that need resources to build. Equipment upgrades are required to progress. This can be an upgraded weapon, jetpack etc. All the while, players can scan the various flora and fauna and complete side missions and challenges.

There are boss battles, which can be frustrating until you work out how to defeat them. I’m not a fan of boss battles, myself, but these are nowhere near the punishing war of attrition that I’ve been subjected to in the past by Japanese games. 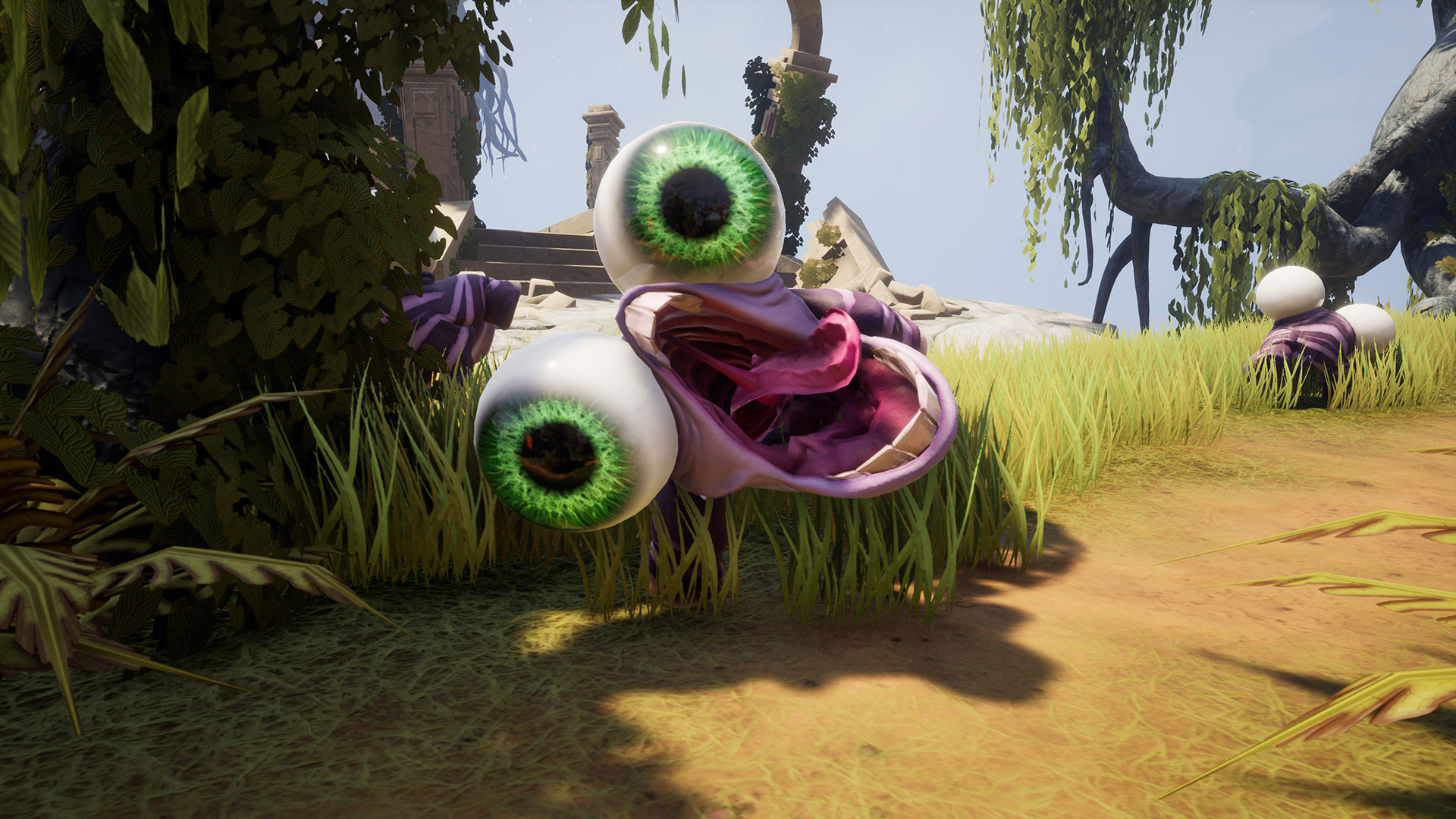 Although the game feels open world, it is a fairly linear affair and thus, whilst I had fun, it’s not a game that I can see myself returning to. It is a novel take, merging resource collection with platforming and a narrative adventure. It’s light on all those things, but still enjoyable.

The game world looks superb, with a very distinct visual style and the creatures roaming the varied landscapes are fascinating to look at. It’s hard not to stop and take in the beautiful vista’s that the game provides.

Overall, Journey to the Savage Planet is a great game. The exploration and constant reveal of new areas will hook you in, making it a difficult game to put down. It’s not a taxing game, but it’s a lot of fun. There are loads of things to do, be it missions or challenges. The game is relatively short, but offers just enough to sate your appetite without being bloated.

If you are after a colourful, funny, quirky, survival / puzzle / exploration game you’ll not go wrong with Journey to the Savage Planet. 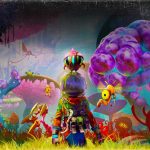 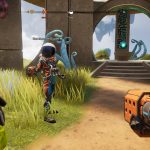 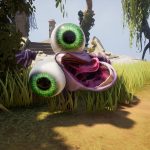 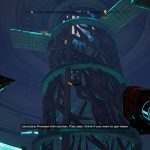 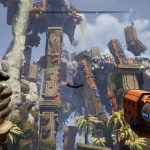