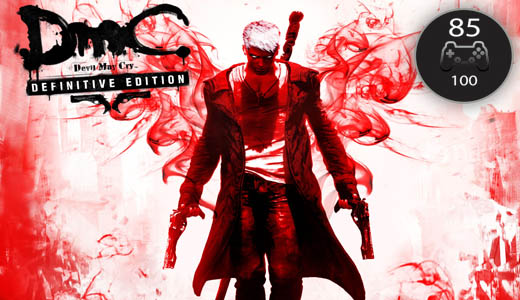 Yet another last-gen game gets a scrubbed-up new-gen rerelease. This time it’s Capcom’s DmC: Devil May Cry. Since 2001 we have been following the button-mashing adventures of Dante.

A brash young man with a shock of white hair, and a thing about outlandish weapons, on a mission to avenge the death of his mother. Four games and an anime series later and publishers, Capcom, decided to take the cult character in a new direction for the fifth outing handing development duties over to Brit outfit, Ninja Theory. 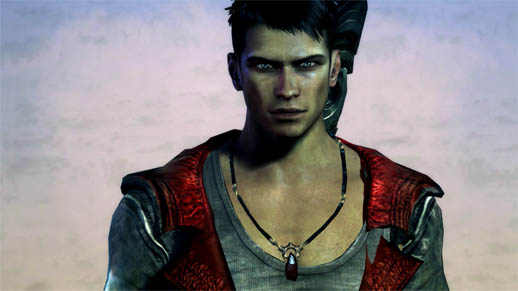 In a similar way that Square tinkered with the Final Fantasy formula to enhance its western appeal, DmC has lost some of the charm of the previous Japanese-produced installments.

Even though Capcom have dispensed with the batshit mad, but endearing Japanese stylings, this is still Devil May Cry– and it’ll have you mindlessly smashing those buttons the same as you always did. 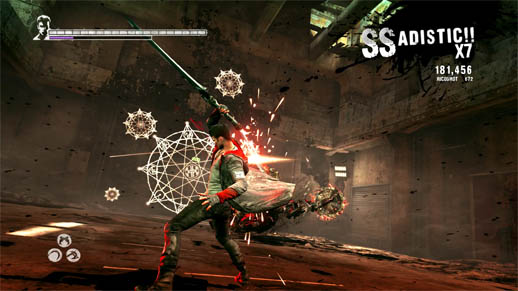 The game starts with the aforementioned Dante at a bit of a loose end, before getting sucked into a war between angels and demons and a quest to unlock the secret of his forgotten past.

As is the norm for a Ninja Theory game, DmC, has many plot-heavy cut-scenes. All in-engine, they are very well done featuring some pretty good voice acting and a plot that is actually uncomprehending, which is a first for a Devil May Cry game.

These interludes provide a nice breather for what is some pretty intense gameplay. At the end of each Level players’ performances are rated before proceeding to the next. 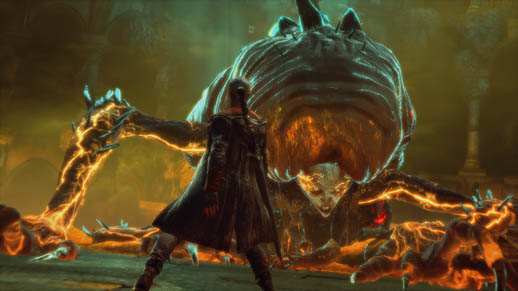 Dante comes to the fight equipped with his pistols, Ebony and Ivory and his sword, Rebellion. His sword has two modifiers. In Angel mode the sword becomes the fast scythe, Osiris, whilst Devil mode changes it to the slow, but powerful battle-axe, Abiter.

Via an inexhaustible combination of button-presses Dante can leap, slice and dice his way through a equally impressive catalogue of demon-types ranging from shield-wielding cherubs to chain-saw equipped nasties. 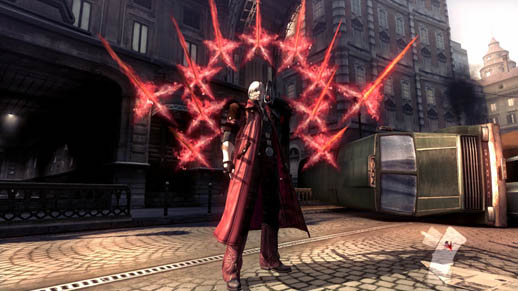 The combat is nothing short of exhilarating and, unlike most games of this ilk, had me coming back for more time and again. Whilst I’ve enjoyed previous editions of DmC, and related games like Bayonetta, I really enjoyed this outing. Whatever changes that Ninja theory have done to the game’s special sauce seemed to work for me, even if the developer’s rebooted characterisation of Dante has left him as a bit of a douche.

Ninja Theory’s graphical style which I found so appealing in the likes of Heavenly Sword and Enslaved looks a rather more muted affair for this remaster on the PS4. 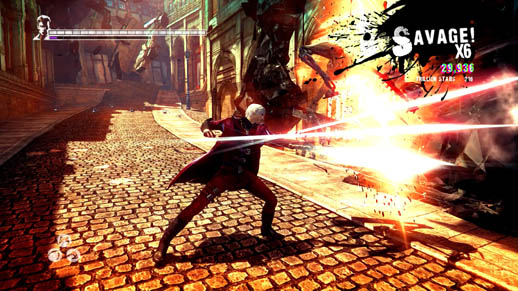 The game looks nice, but nowhere near as good as a game developed exclusively for the new-gen.

Still, the graphics have been polished up and are now offered at a 1080p resolution running at 60 frames-per-second, perfect for a button-masher like DmC.

The Definitive Edition comes complete with all the original last-gen DLC, including the horde-like Bloody Palace survival mode and add-on campaign Vergil’s Downfall, with a new playable character, Vergil.

I am starting to get a bit of remaster fatigue, but still I really enjoyed DmC: Devil May Cry:Definitive Edition (what a mouthful). 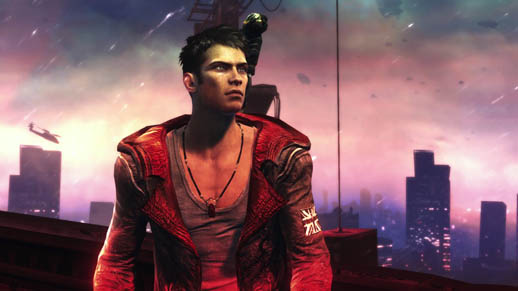 I’d never played the last-gen version, so it was a new experience for me and, especially at a relatively discounted price, offered me great value for money. All in all it’s a great package that has a lot to offer players and definitely worth a go.

DmC: Devil May Cry: Definitive Edition is out now on PS4 and Xbox One.