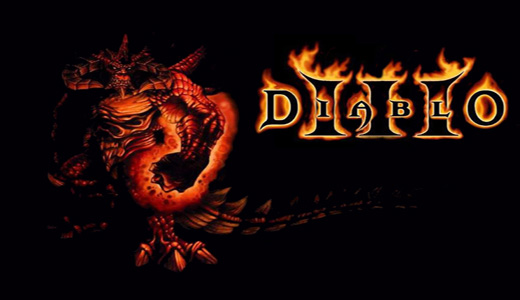 If a title is released by Blizzard, you can guarantee that it’s going to be a must have, must own.

The massively gigantic behemoth that is World of Warcraft and Starcraft as examples.

Diablo III, released in May of this year was one of the most anticipated games for PC (and Mac) and had been in the making since 2008.

To start with you select your class from the five available; Wizard, Witch Doctor, Demon Hunter, Barbarian, and Monk then once chosen you go forth either into Single Player or brave it and join an Online game using Blizzards own Battlenet service (login required). 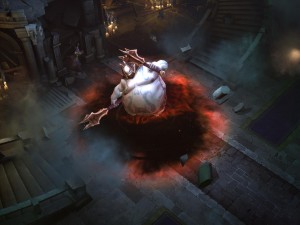 to go Single Play first to build your Level, playing experience and wealth up first, otherwise you are liable to taken down by some 12 year old Chinese kid who plays Diablo 24/7.

Leveling up is game specific and depends on your combat skills and how many bouts of combat you encounter.

Once your Experience bar is full (housed at the mid-bottom of your HUD) the game will automatically raise your Level.

Not only does this make you more powerful and more immune to attacks, but it also allows you to equip better weapons, wield more damaging magic and adorn more defensive attire.

The gameplay will differ slightly dependent on the character class you choose; each has their own niche skills and abilities. 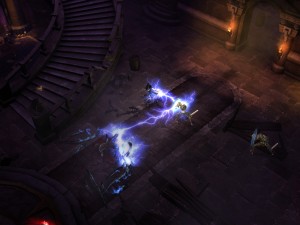 Played in third person, titled top down view your terrain is a semi open world map with way points to areas that you have already visited. Trust me, you need these waypoints as you will go back and forth alot. Waypoints once discovered are always open and available on your Map screen.

The story to Diablo III centers on events twenty years from the goings on of Diablo II.

Deckard Cain (your first Mission is the ‘Legacy of Cain – obviously the devs of Diablo are fans of the actual Kain/Blood Omen series), and his niece Leah are in a cathedral studying some ancient text when the sky begins to fall in on them with damaging, deadly and explosive consequences.

A star falls onto the Cathedral, smashing it and creating a crater into which Cain gets swallowed into.

Your first task, as mentioned above, is to help Leah find her Uncle.

All hell breaks out, as the dead rise and the Angels turn their backs on the looming Apocalypse.

You and only you can save the world.

Gameplay is controlled by both keyboard commands and alot (to understate) of mouse clicking.

Getting a specific D3 accessory, 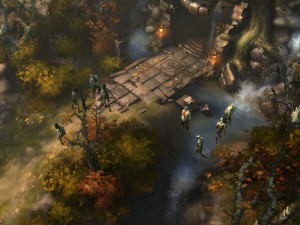 like the Cyborg MMO7, will lessen the amount of clicks necessary.

Thankfully your Inventory Menu is easy to navigate, but does get full very, very quickly. You can either drop items or if you’re near a merchant, sell them off for Gold.

Equipping is just easy aswell, you can either assign this or these (and more) to a hot-key. The Inventory Menu is smart enough to display a comparison between that which you have in your Inventory and what you have equipped, per Level. So you cannot mistakenly sell of armour that is more powerful than what your character is wearing (that said, you still need to take note of the items in your Inventory and take notice of the comparisons).

There are copious amounts of Achievements available in Diablo III aswell as exploring the environments can reap rewards.

Various Boss fights ensue as the story unfolds and there are always side Missions to pick up, as with all RPGs. 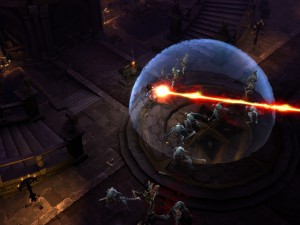 Blizzard also has an Auction House service as a part of their Battlenet. This enables players to either buy or sell in-game items with their collected Gold, or buy and sell the same said items for real world cash.

Multiplayer is a must experience for any Diablo owner and providing NZ’s feeble excuse for Broadband is having a good day you can join an existing game or become a Follower, helping others out.

I had endless issues with online play, but not because of Blizzards services.

One surprising factor of Diablo III (and this took alot of players by surprise) is that Single Player has to be played online.

You cannot play the game without signing in and maintaining a connection to Blizzards Battlenet.

This is abit of a letdown, you can ONLY play where there is an internet connection. And if you have a Broadband plan with a small data cap (as most do) expect to be suddenly logged out of Battlenet and progress lost. 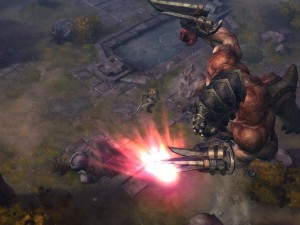 console gamer through and through, it takes a a stellar title for me to equip a mouse and keyboard, Diablo has always been one of those.There is no ‘Quick Play’ with Diablo III. I’ve had a spare few minutes and thought, right, I’ll crank up D3, and six hours later I realise that I should probably have dinner, but then still, I keep on playing.

If it were not for the compulsory Online factor, D3 would be a deserved 10 out of 10.