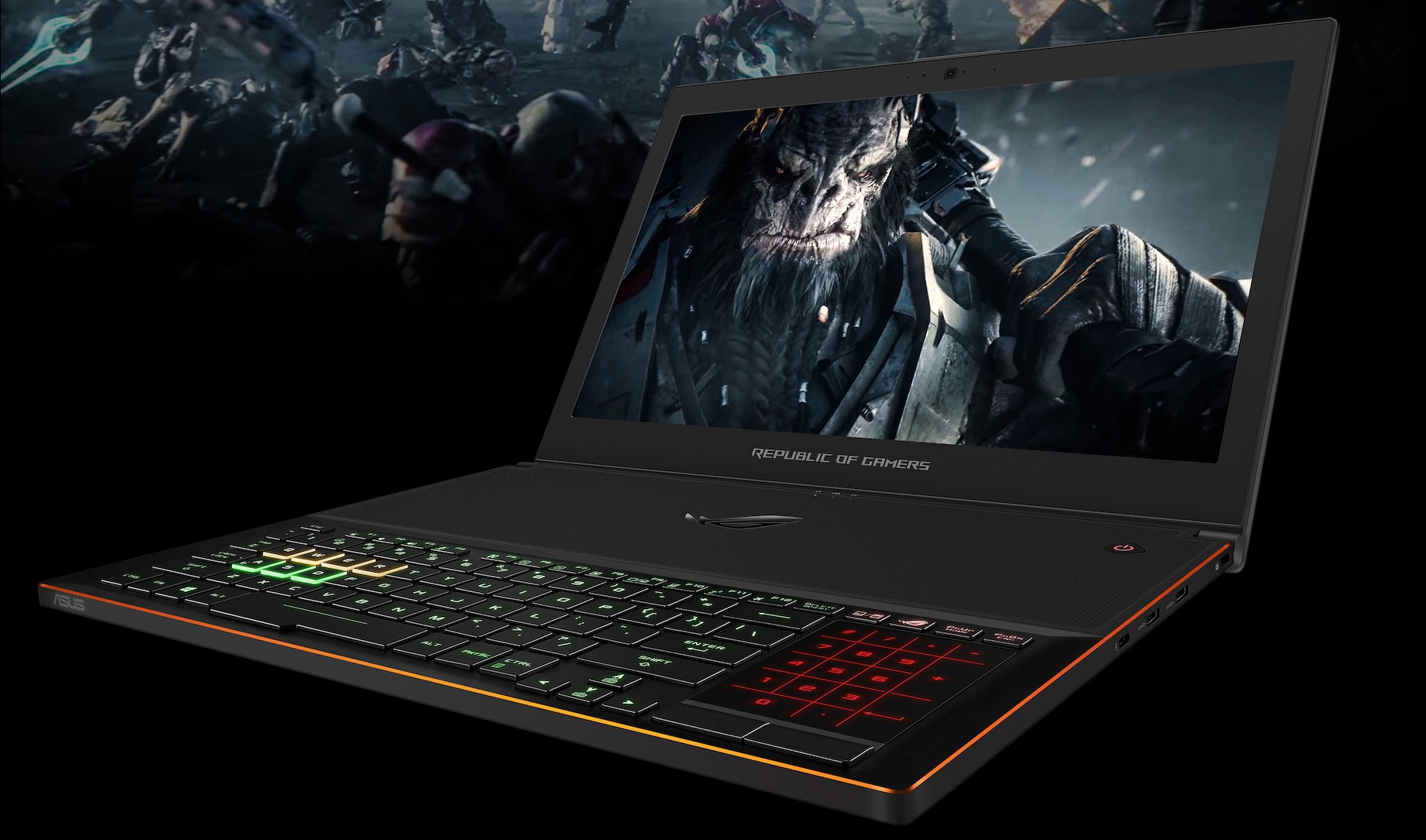 ASUS Republic of Gamers (ROG) has revealed info on the Zephyrus S (GX531), the latest model in the ROG Zephyrus series, which sets a new milestone for ultrathin gaming laptops.

At a mere 14.95~15.75mm thin, Zephyrus S is 12% slimmer than the original Zephyrus (GX501). It’s equipped with the latest Intel Core i7-8750H CPU and up to NVIDIA GeForcen GTX 1070 Max-Q graphics, making it ideal for work or play. Super-narrow bezels squeeze a 15.6-inch display, with a 144Hz refresh rate and 3ms response time, into a 14.2-inch chassis. The all-metal chassis is strong enough to meet military-grade durability standards without compromising on design, with sleek lines and a premium finish. An advanced cooling system ensures optimal performance of all components, incorporating the proprietary Active Aerodynamic System (AAS) — a design and engineering hallmark of the Zephyrus series.

One of the biggest challenges with creating such a thin laptop is making sure that the chassis strikes the best balance between strength and weight: Zephyrus S uses a mix of aluminum and magnesium alloys in its construction to achieve this balance. Each lid is meticulously machined from a solid block of aluminum. This precise CNC-milling process takes five tooling stages and nearly 72 minutes to carve out all the intricate details that ensure a perfect fit, creating a lid that is remarkably rigid, yet slim. It also helps the Zephyrus S casing remain durable: engineering samples have already met military-grade durability standards for jolts and vibration. 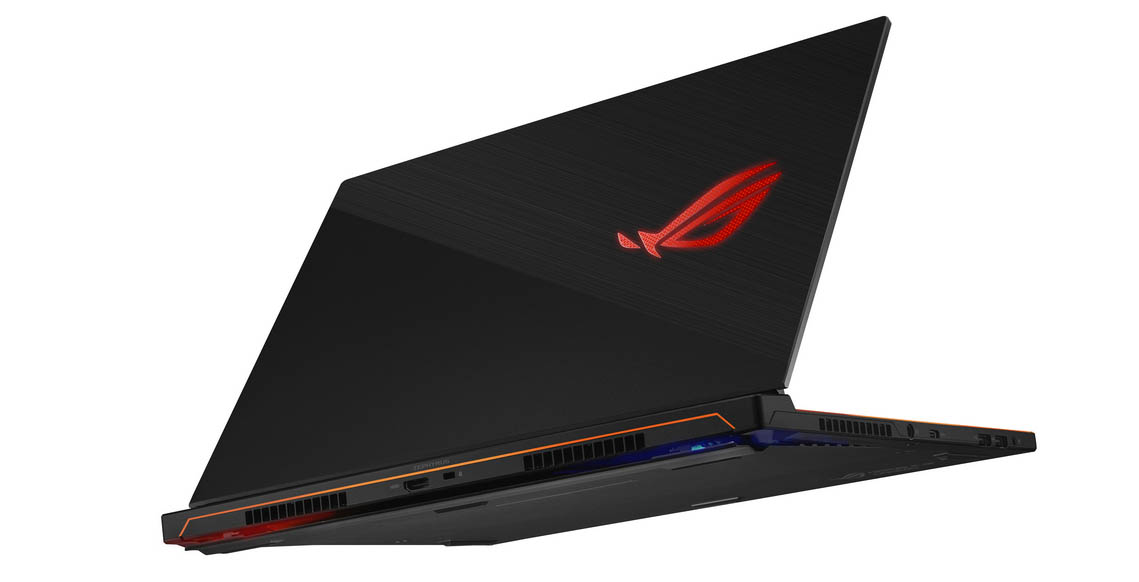 Super-narrow bezels allow the 15.6-inch display to be squeezed into a 14.2-inch chassis. This reduces the entire footprint, allowing the Zephyrus S to fit into tighter spaces than its predecessor. In addition, the slimmer bezels create a more immersive gaming experience.

Since the original Zephyrus, ASUS has worked closely with panel maker AUO to ensure ROG laptops have the very best displays for gaming. The 120Hz panel on the initial version doubled the refresh rate of conventional displays, while Zephyrus S pushes the refresh rate to 144Hz, and reduces blurring and ghosting by lowering the response time to 3ms.

Built for more than just speed, the IPS-type AHVA panel also has excellent image quality. It covers 100% of the sRGB color gamut, ensuring richness of color, and wide viewing angles keep the picture from washing out when viewed in split screen.

Cooling the critical components that comprise Zephyrus S is a difficult engineering feat due to the ultrathin design, but it’s imperative to ensure peak performance. Because of this, ASUS and ROG thermal engineers developed the innovative Active Aerodynamic System (AAS) for the original Zephyrus. When the lid of the laptop is lifted, a special vent opens underneath the chassis to let the laptop draw in more cool air. Similarly, the AAS intake measures 5mm on Zephyrus S, stretching across the entire back of the body to improve airflow by 22% compared to traditional designs. Additional airflow comes in from through the keyboard, and the keyboard’s forward layout makes more room for additional cooling throughout the system. 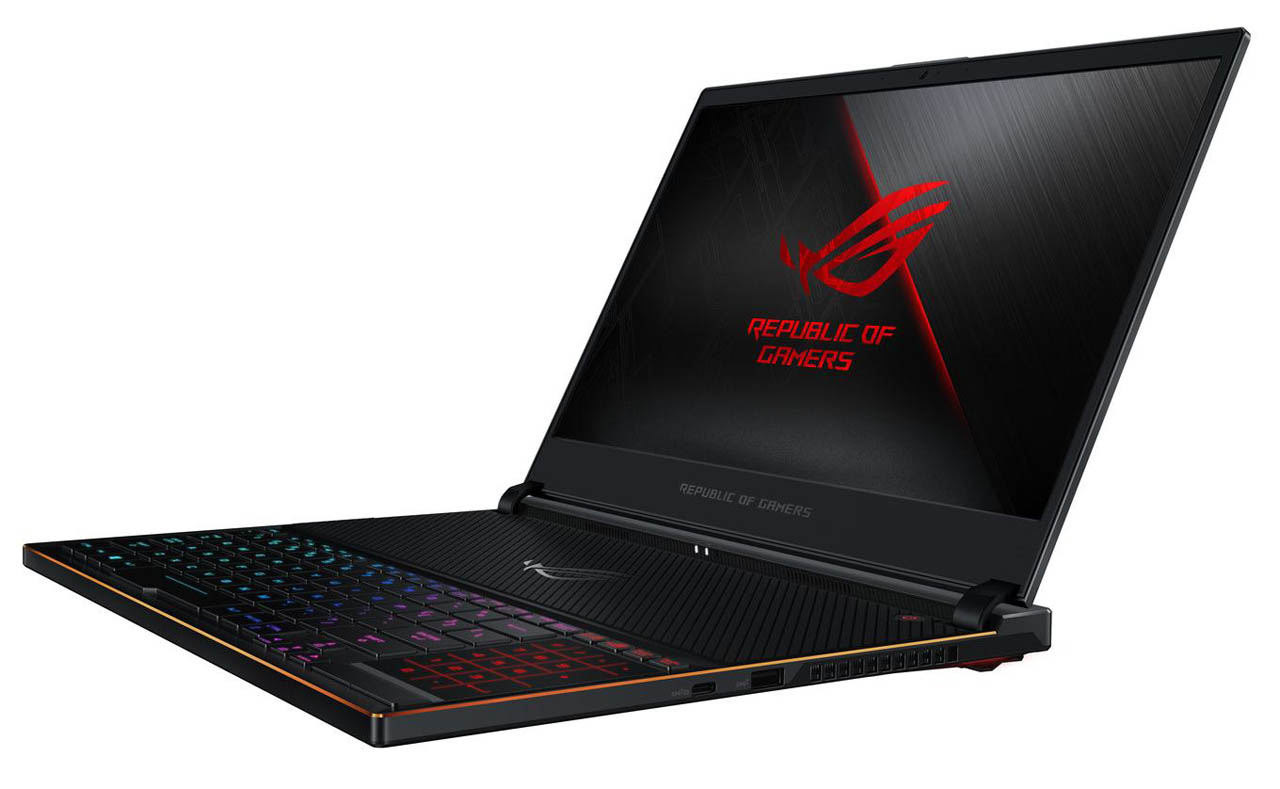 Within the chassis, the Zephyrus S contains five heat pipes that pull heat away from the CPU and GPU, and also the VRM circuitry that feeds them power. The CPU and GPU connect to both shared and dedicated heatsinks to ensure efficient cooling for any workload, and the power components stay under 80°C to improve long-term reliability. Thermal energy is channeled along the pipes to four heatsinks and exhaust vents at the rear corners, twice as many as in the first Zephyrus.

Keeping heatsinks free of dust and debris is key to preserving cooling performance, which is why the engineering team added self-cleaning fans to eject particles from the system through anti-dust tunnels. This special feature prevents accumulation on the fins to ensure consistent cooling and improve long-term stability.

With 83 blades each, the dual 12V AeroAccelerator fans have 17% more blades than in the original Zephyrus. Airflow is also improved by the fan’s shaped aluminum shroud, which has curved edges and raised guides to help channel more air into the blades. Rotational speeds are determined by an intelligent algorithm tied to three profiles. Keyboard shortcuts allow users to switch between Overboost mode for maximum gaming performance, Silent mode for lower acoustics, and Balanced mode that maintains a level between the two.

Integrated RGB lighting lets gamers customize Zephyrus S to their preference, or match the mood of the game currently being played. Four independent zones illuminate the keyboard, and additional LEDs create a subtle glow inside the AAS vent. Aura Sync coordinates colors and effects with compatible peripherals like the ROG Delta headset and Gladius II Origin mouse, making it easy to personalize the entire setup with just a few clicks. Third-party applications can harness the lighting through the Aura SDK, and ROG is working with developers to incorporate support in games and applications.

What was previously ROG Game Center is now Armoury Crate, which unifies ROG hardware with a single utility that makes essential functions easily accessible. System settings and Aura Sync lighting are easily adjusted on the fly, or a user can define preferences for both, with up to four profiles, that make adjustments automatically when the selected titles load. Armoury Crate comes with a companion Mobile Dashboard for Android and iOS, and more capabilities are due in future updates. 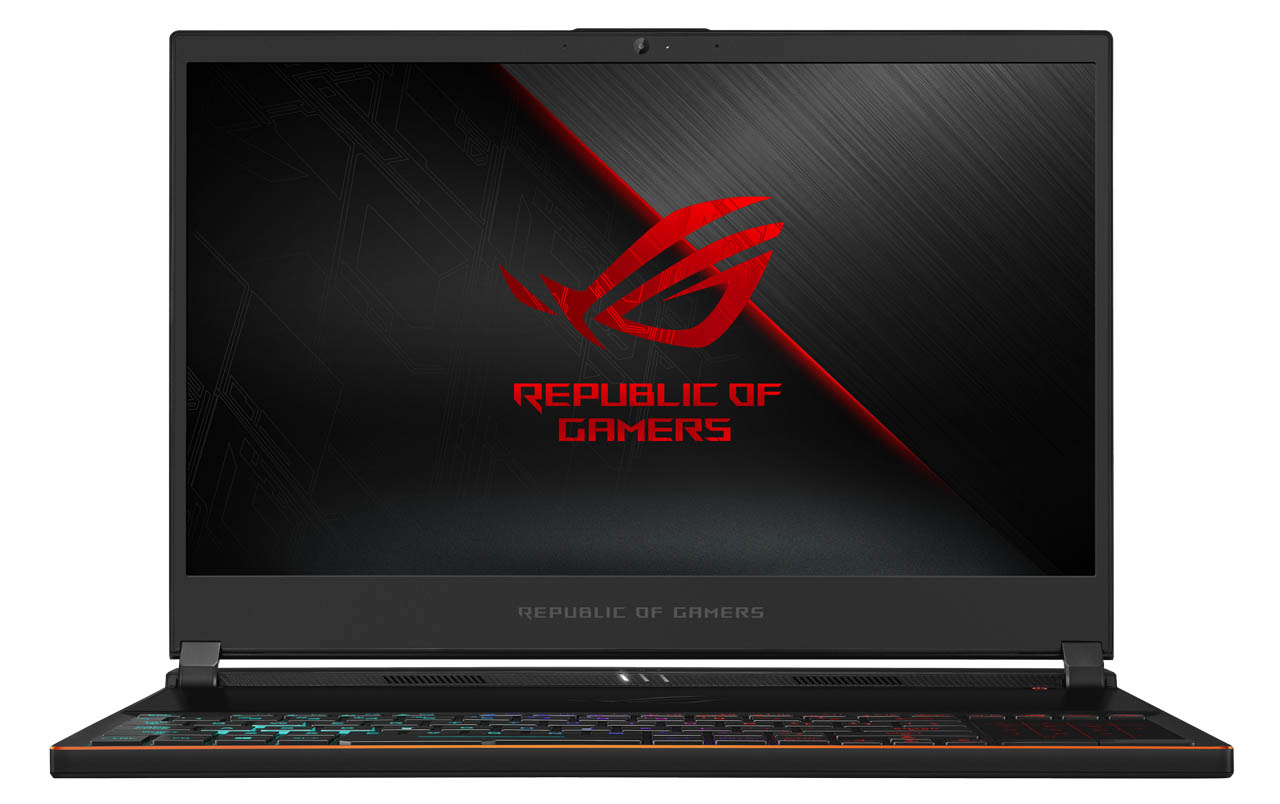 Although the keyboard-forward layout on Zephyrus S primarily benefits cooling, it also allows for a more comfortable desktop-like resting position. Overstroke technology fires earlier in the key travel for quicker responsiveness, and the longer post-actuation distance maximizes the 1.2mm of travel to improve the overall typing feel. The durable switches are rated for 20 million presses, so they can withstand heavy use, and N-key rollover ensures each press registers precisely regardless of how many keys are mashed at once.

Zephyrus S includes an upgraded sound system. Dual front-facing speakers embedded in the hinge cover are powered by smart-amplifier technology that keeps the speakers within thermal and excursion limits, so volume can reach higher limits without distorting the output or damaging the cones. Sonic Studio III adds virtual surround-sound for deeper immersion with stereo headsets, and it features a new APO injection capability that extends speaker virtualization to a wider range of gear, including standard analog headphones along with USB headsets, external DACs, and VR devices. 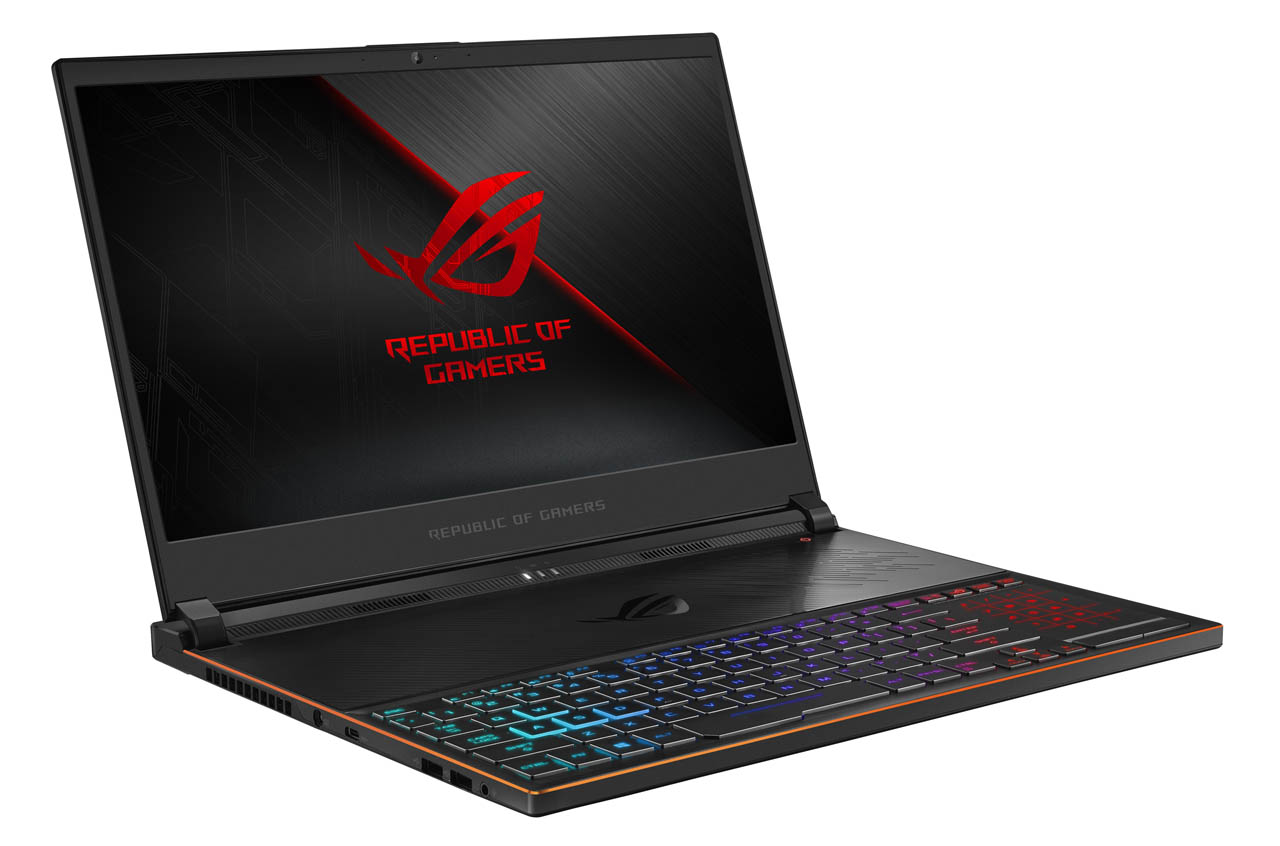 Zephyrus S is capable of heavy workloads in the same way it handles exhaustive gameplay. The latest 8th Generation Intel Core i7-8750H processor offers six cores and 12 threads of parallel processing power that can easily handle demanding work like compiling, rendering, and content creation. The extra cores also provide headroom for multitasking allowing for a mix of gaming with live-streaming, recording, and other tasks. GeForce 10-series graphics — up to the GTX 1070 with Max-Q Design — boost performance in apps that support GPU acceleration. More importantly, the discrete graphics chip is capable of pumping out triple-digit frame rates in popular games, allowing for optimal use of the display.

ASUS ROG Zephyrus S (GX531) will be available in Australia from late October 2018. Pricing and configurations will be announced at launch.