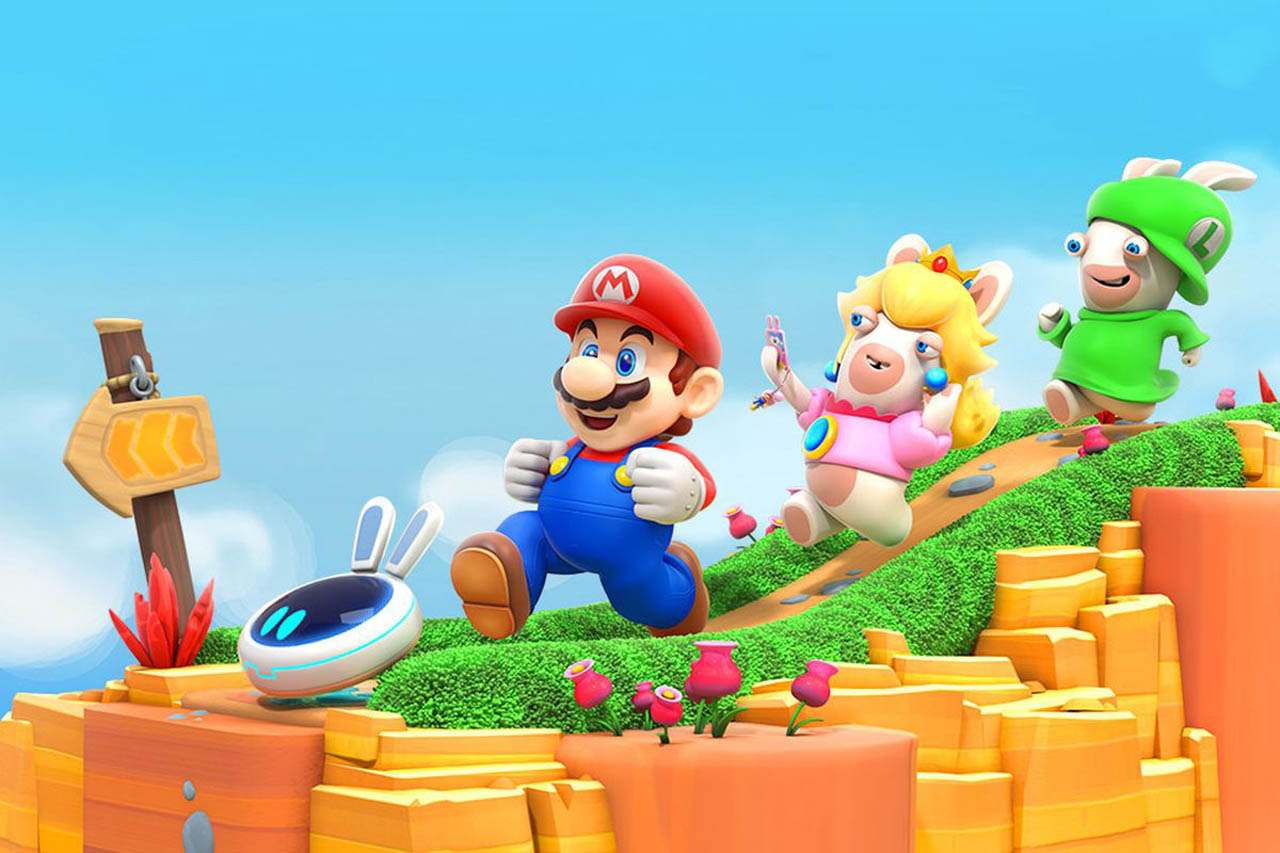 Mario + Rabbids: Kingdom Battle seems so contradictory. Nintendo is famous for protecting and controlling their IP always, and the Rabbids are a silly joke by many gamers among us. The idea that Nintendo would allow Mario and Rabbids to feature in a Ubisoft game seems out of place, and what’s stranger yet, is that it’s outstanding.

A young woman creates a VR headset that presents to the viewer an AI called Beep-0. Thanks to this she can fuse two items in the real world using dark matter. Suddenly out of nowhere the Rabbids appear in their time travelling tumble drier, in the room, and being up to their usual mischief one Rabbid pops the headset on and starts fusing away. Thanks to the young inventor’s affinity for Mario collectables, Rabbids start getting fused with Mario, and when a malfunction occurs which results in the drier sucking in the Rabbids and the Mario gear, somehow the actual Mushroom Kingdom via a portal in the sky gets fused. 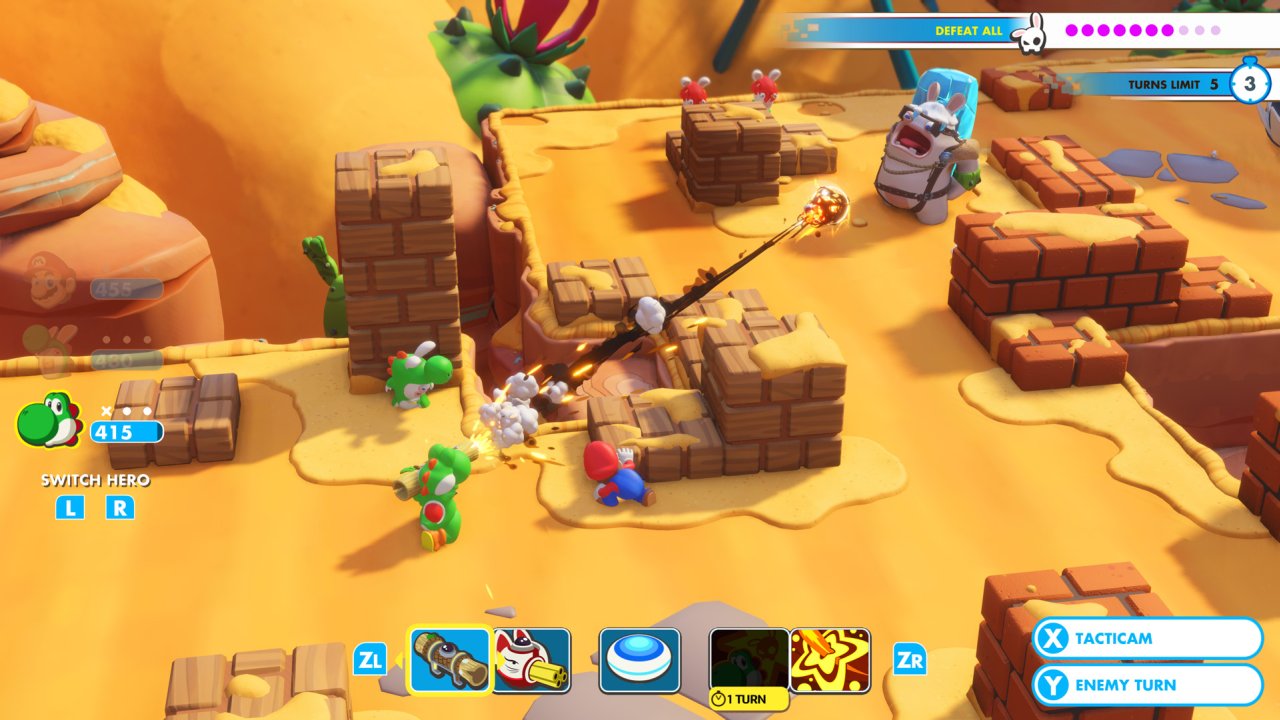 In this process, the Rabbid that was fusing everything else, gets fused with the VR headset and can’t stop itself from zapping fusions around the world. Most of these fusions have made the Rabbids angry, but the fusions with Mario, Yoshi, along with the others are good and working with their counterparts need to stop the headset Rabbid from destroying the world.

You then proceed to make your way through the world beating the fused and insane Rabbids, freeing them from their fusion. This is a clever move by the developers, as you will beat many Rabbids, but by keeping the narrative as freeing the Rabbids from their curse it makes it feel nice and Nintendo-y, which is a common theme in the game. The game feels like it could have been made by Nintendo, with its carefully polished gameplay and graphics, fun yet serious gameplay, and family friendly tone. At a bare minimum, it feels like it has been through Nintendo’s QA process and passed with flying colours. 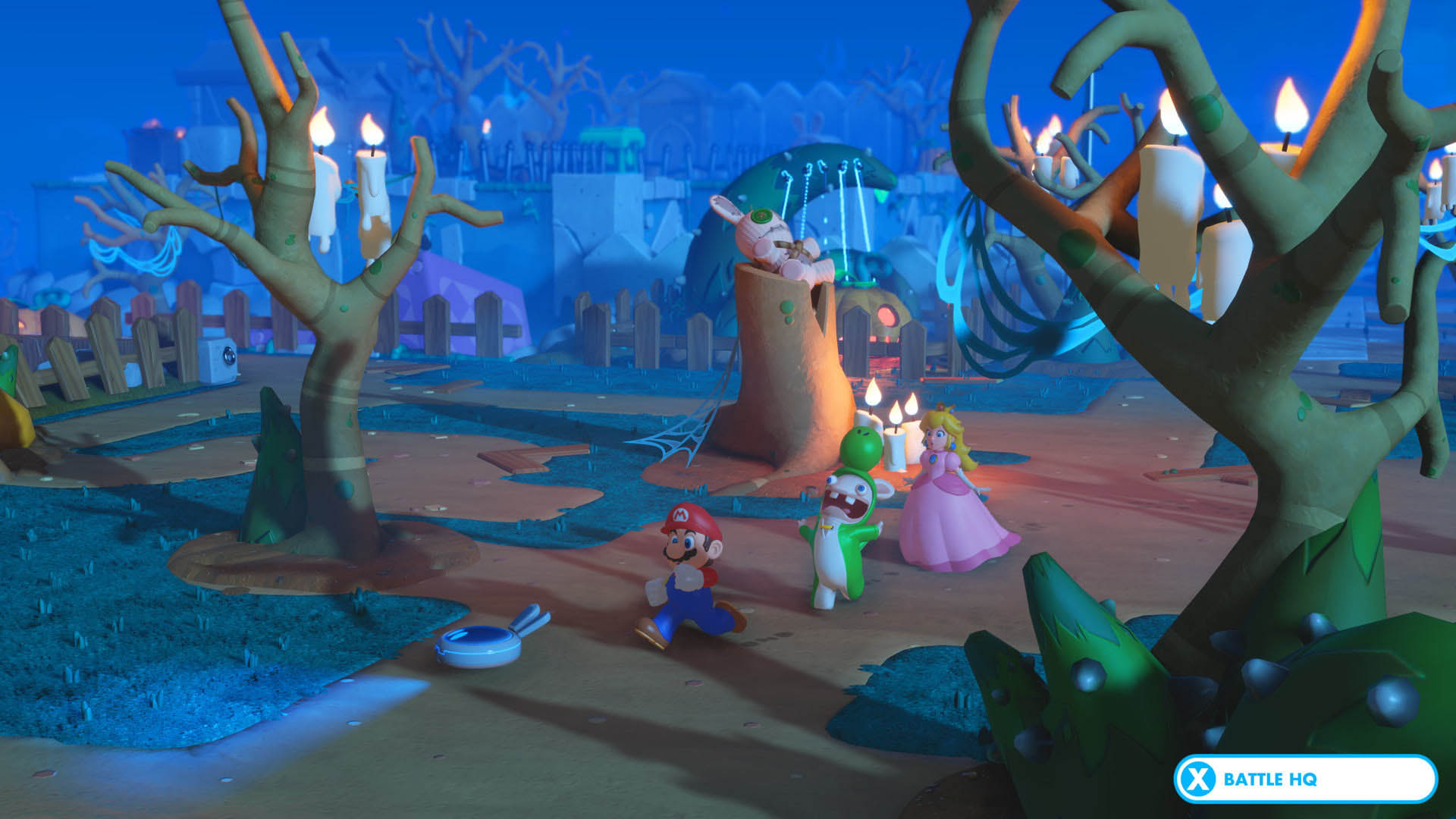 The gameplay revolves around Tactical RPG battles. Your characters move around a grid in turns, then the enemy have their turns, and so forth until a battle is won or lost. Goals can vary from defeating all enemies, to get a character to x location, and range from not too hard to brutal. I can’t even describe how many times I got stuck in a battle getting my rear end handed to me. The game is far from shallow too, with each character being able to attack on, use a special ability once, and move once per turn, in whichever order suits.

Each of these elements have plenty of variety, but nothing is as crucial to master as movement. Your characters can hit enemies as they move, giving an extra little attack, as well as jumping off each other to squeeze out a few more squares. Where your movement ends can make a difference as the terrain, from elevation to rocks to hide behind, can make a significant difference. Unfortunately, once you have moved to a location you are unable to undo it. Being able to undo your movement before you attack is a common allowance in Tactical RPG’s, which is frustrating not being an option here as one difference in space can be the difference between a win and a loss. 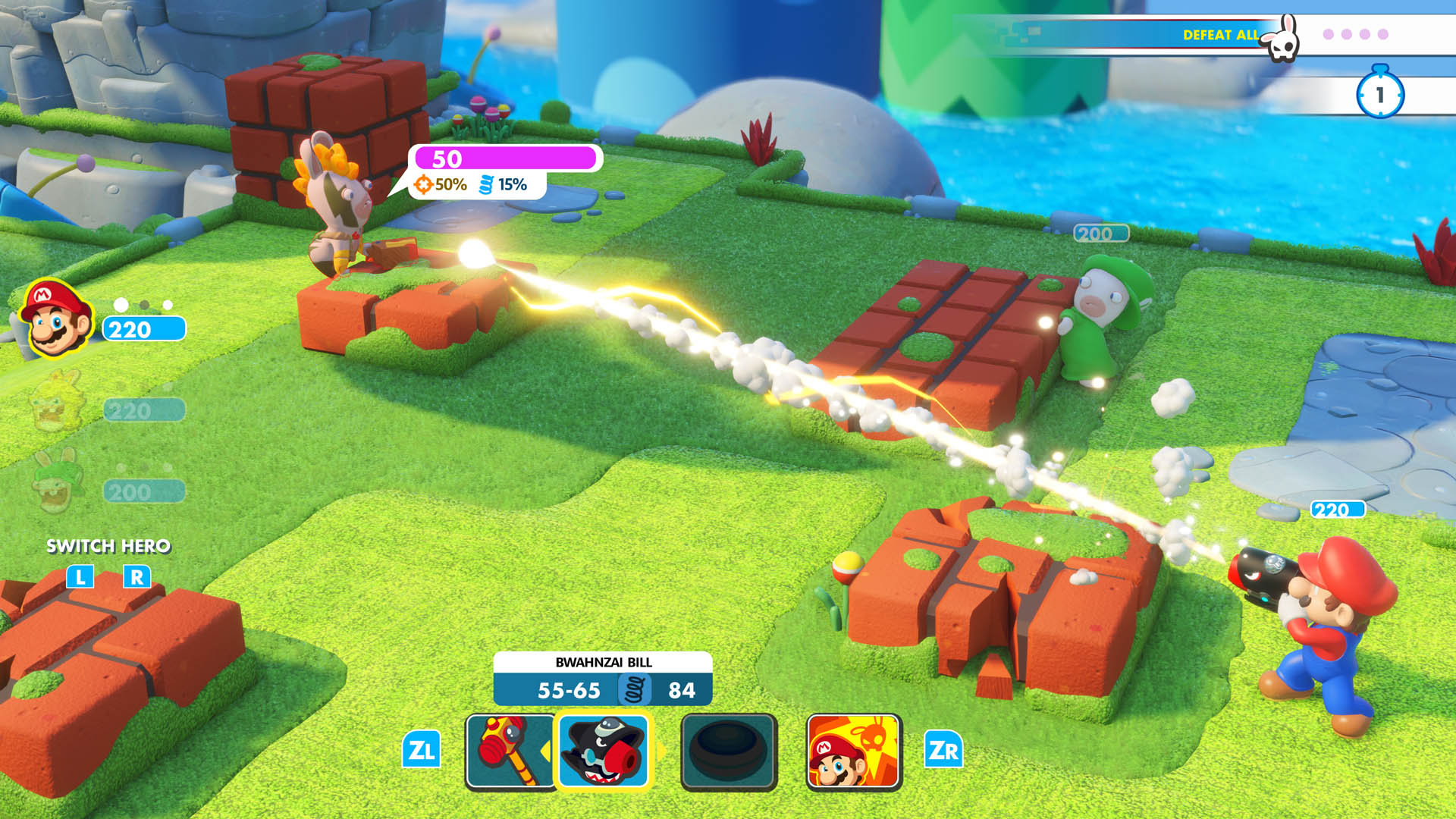 Between battles you will wander around areas finding hidden items or coins, completing puzzles and making your way to the next battle. I found this to feel like busy work between the interesting parts of the game which are the battles, but I am sure some people will find joy in it. After beating a world, you can return to it to find challenges hidden around the stage.

Challenges can be ruthless, as I struggled to make my way through the first challenge. It required defeating 15 enemies in three turns and that stumped me for longer than I would like to admit. That’s one theme the game has throughout, a ruthless unwillingness to pull its punches which one can’t help but appreciate. The game doesn’t have a difficulty setting but as each stage starts you have a chance to select easy mode which recovers your health and gives some extra health too. It’s less of an easy mode and more of a compromise for those who get sick of being beaten down. Trying to perfect every stage gives a large amount of replay value if your first playthrough wasn’t enough. 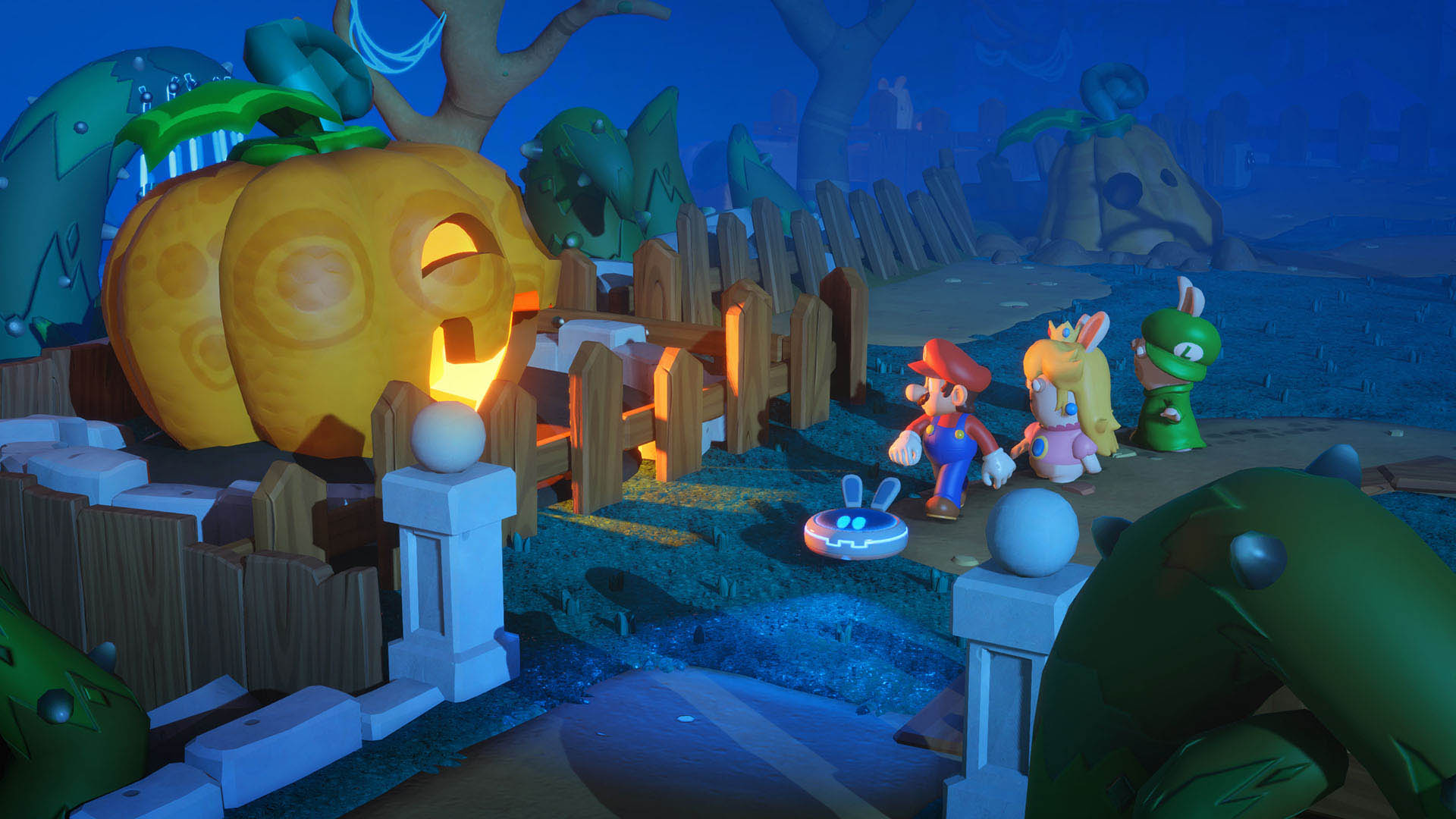 Mario + Rabbids: Kingdom Battle has moved from a game that many laughed at, to a game that every Switch owner owes themselves to at least try. A charming, silly and funny aesthetic and story hides a deep and difficult Tactical RPG, that eases the tension with its wonderful charm. 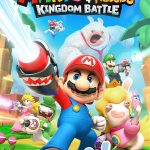