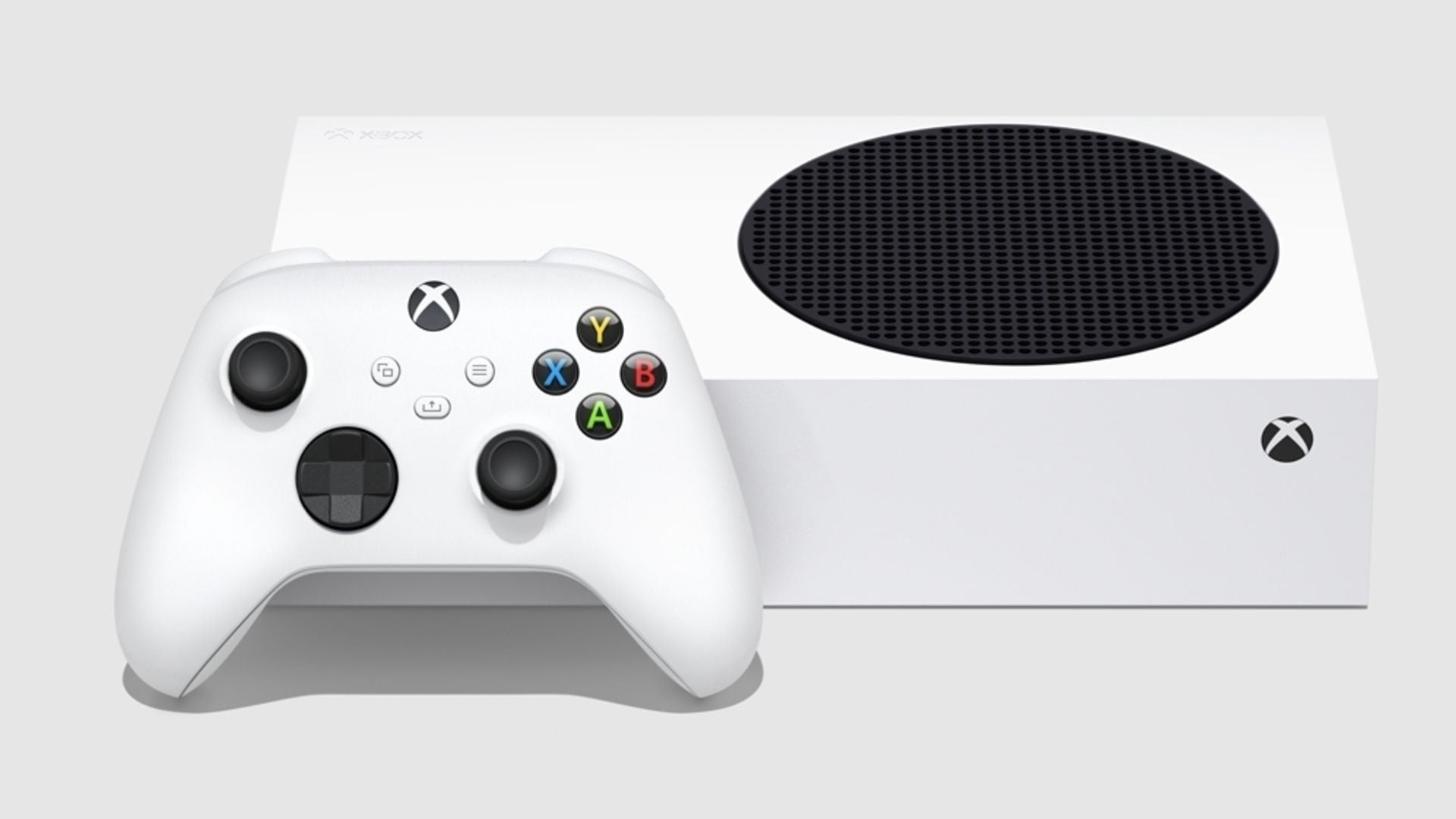 A year and a bit later and I’ve got my hands on an Xbox Series S.

As an owner of an Xbox Series X since (just before) launch, I’ve been a bit guilty of turning my nose up at the junior version of Microsoft’s next-gen consoles. Silly really, as I still love my Xbox One X, which the Series S trumps with ease.

Unpacking the Xbox Series S, the first thing I noticed was just how small the unit is. It’s a lot smaller than the Xbox Series X and tiny compared to the Xbox One whose former space it now occupies. This is great, as consoles have been getting too big, especially Sony’s massive PlayStation 5. Also, as tiny as it is, Microsoft has still managed to keep the power supply unit inside the chassis, so no power brick like the OG Xbox One. 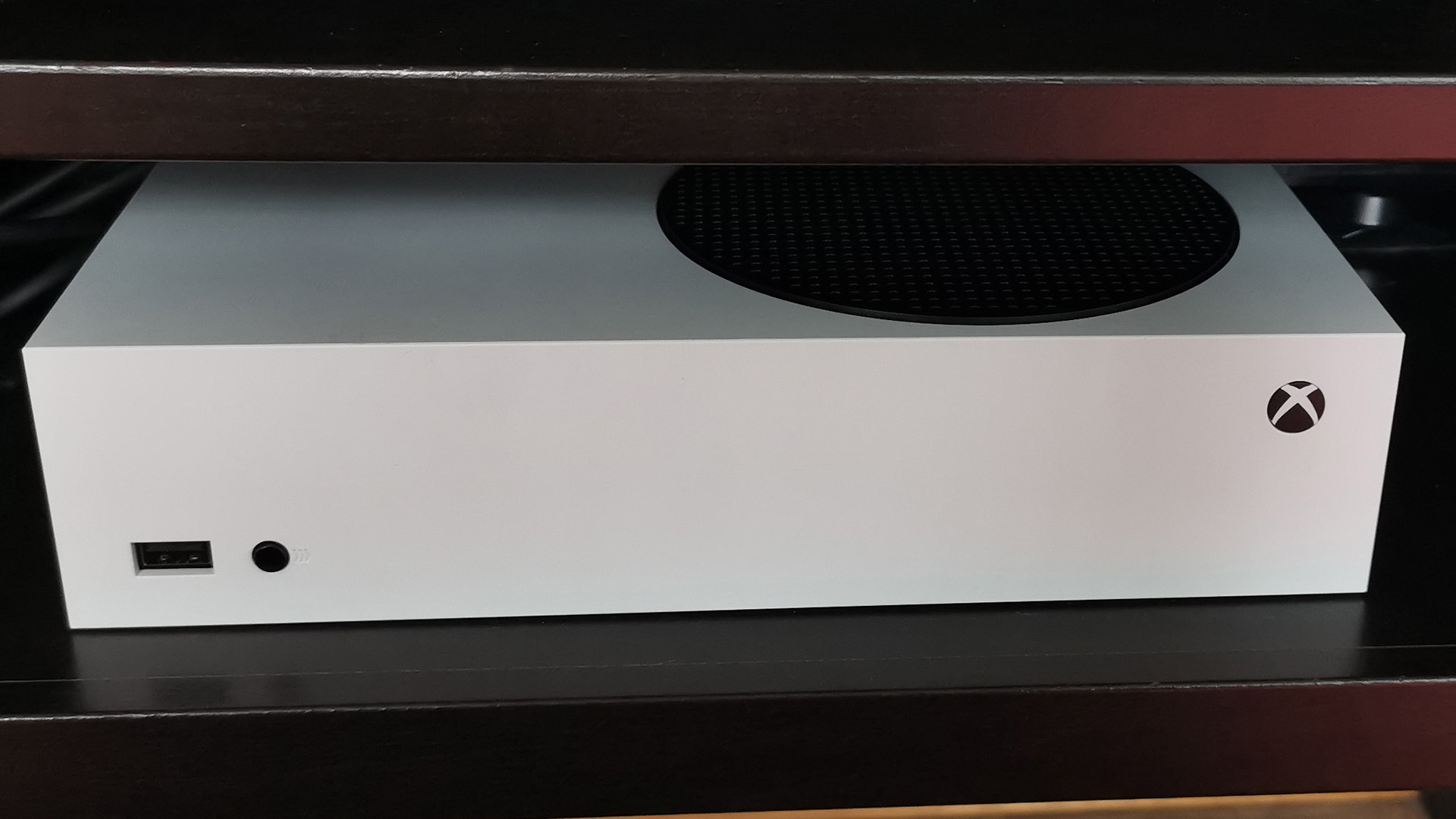 I’m not entirely taken with the brilliant white of the device. I can see its ghostly visage through the smoked glass of my TV cabinet. But I do like the white controller. It’s a matter of personal taste, I suppose. Not sure why there’s a black circle on the top, either, makes it look like a fancy electric camping stove or one of those digital mixing decks.

One of the big hang-ups, for me, with the Xbox Series S is the lack of a disc drive.

I feel the same about the digital version of the PlayStation 5. But, to be fair, I could probably count the number of times I’ve shovelled a disc into the Xbox Series X on one hand. It does, however, exclusively tie you into the Microsoft Store for buying your games. Also, if you’ve got a big collection of backward-compatible OG Xbox, Xbox 360, or Xbox One games, the Series S is probably not for you. If you are after a console doubling up as a Blu-Ray player, you are going to be out of luck as well. 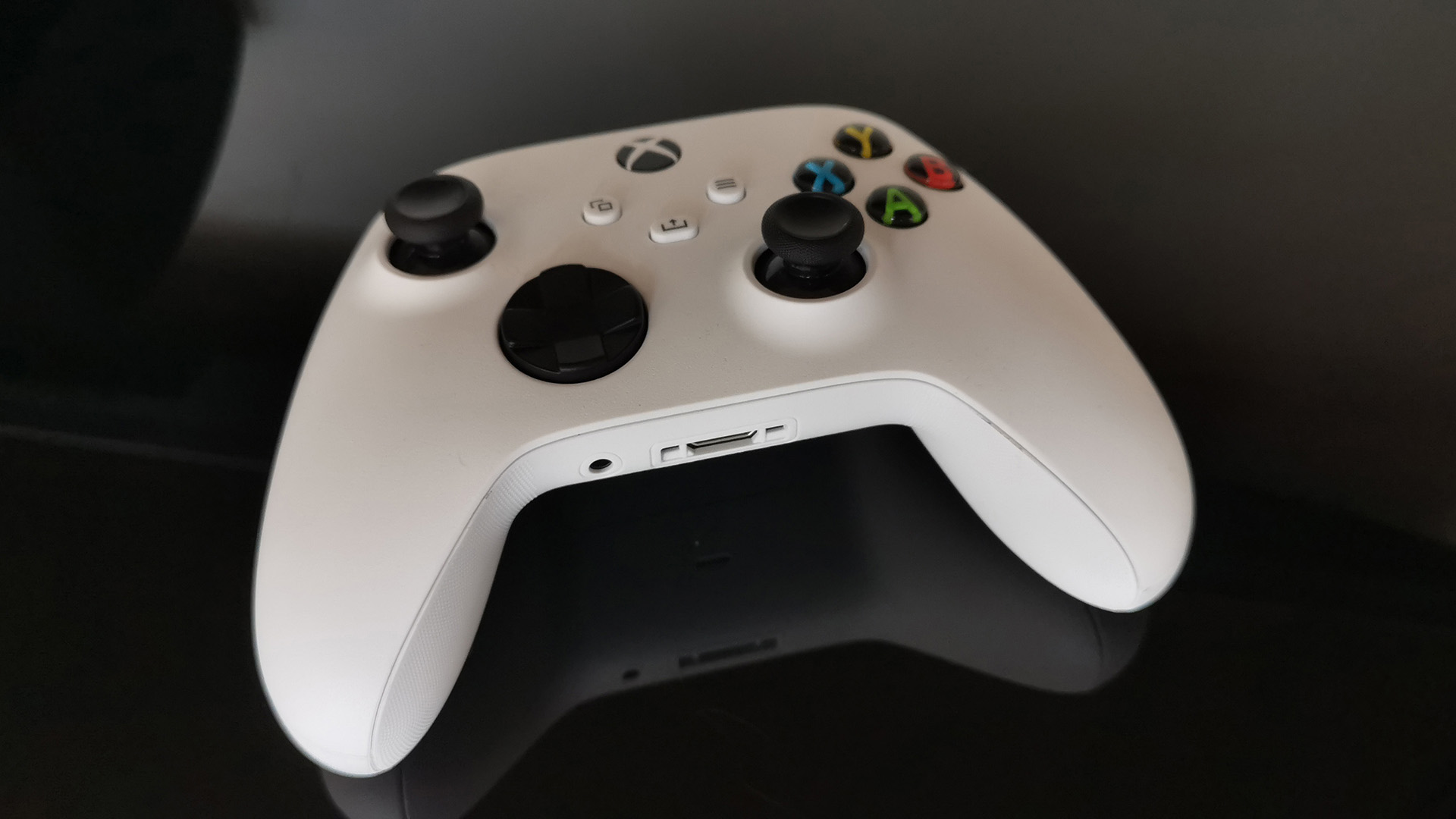 It’s also worth remembering that the Series S is 100% an Internet-reliant console. I’d say that most devices are these days, but with the Series S the only way you are going to get content on the machine is via the Internet (or in some cases over your home network from another Xbox Series X|S console). The machine is Wi-Fi enabled, but also has an Ethernet port for wired networking.

Whilst the Xbox Series S is capable of 4K output, there’s a fair bit of upscaling going on to maintain the performance with a lower-spec machine. It is probably best paired with a 1080p TV, which is exactly what I’ve done.

Plugging the two traditional hard drives in the back, that were formally in the Xbox One X that it replaced, the Series S started searching for the mandatory updates for the installed Smart Delivery games. These automatic free updates replace the Xbox One version of these games with their Xbox Series X|S counterpart. 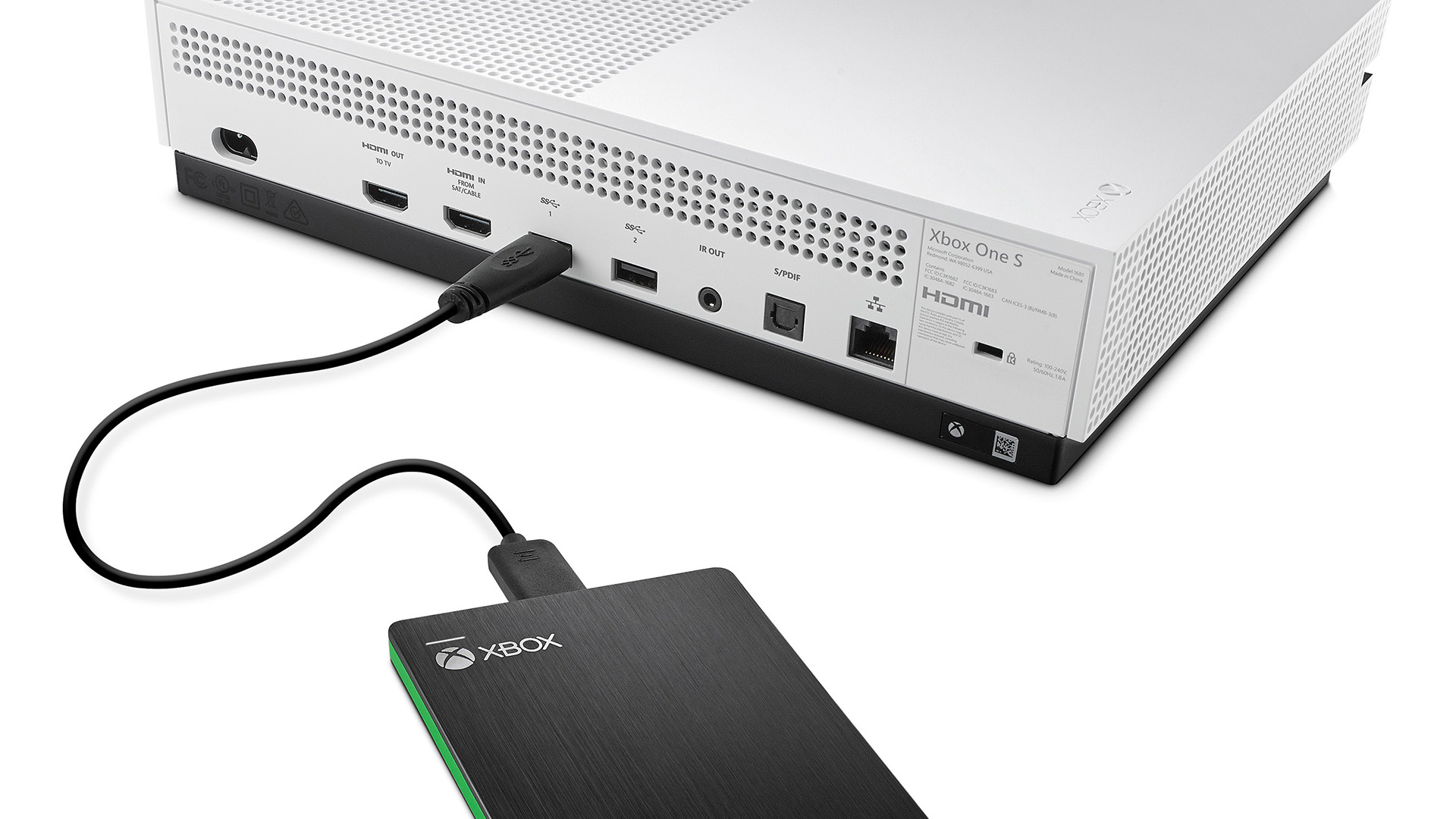 But therein lies a problem. Games that were once very happy to be accommodated on a cheap portable hard drive, when supercharged with their Xbox Series X|S version, must reside on the device’s internal storage.

This highlights the only unforgivable thing with the Xbox Series S: the tiny amount of onboard storage for your native Xbox Series X|S games. The packaging states that the console has 512GB of storage, but the reality is more like just over 350GB. That’s three and a half bloated next-gen games or half a dozen more conservative titles.

With no disc drive, you don’t want to be downloading a game from scratch for a cheeky five-minute session. Spending AU$350 for a 1TB Seagate Storage Expansion, maybe a bit of a push for many considering the console itself retails for AU$450. The 2TB Seagate Storage Expansion is a breathtaking $699.95. A 2TB PlayStation 5 compatible NVMe drive will set you back between AU$400-500, which is $200-$300 less than its Xbox counterpart. 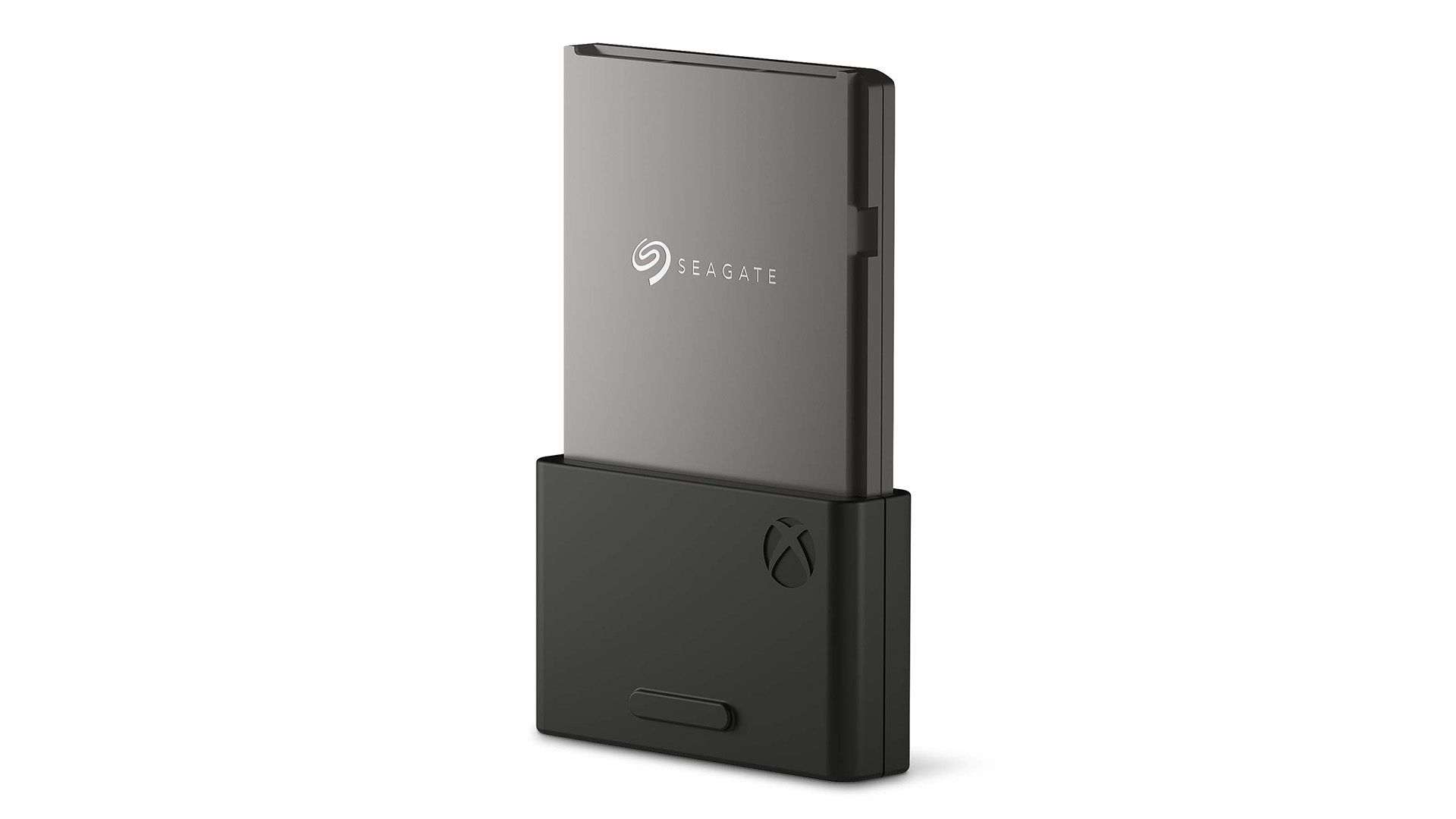 With a bit of restraint and perhaps an investment in a storage expansion or external drive, the above becomes more of a manageable nuisance rather than the end of the world. It’s a small and understandable compromise for a cheaper entry point into Microsoft’s rather fantastic Xbox gaming ecosystem. 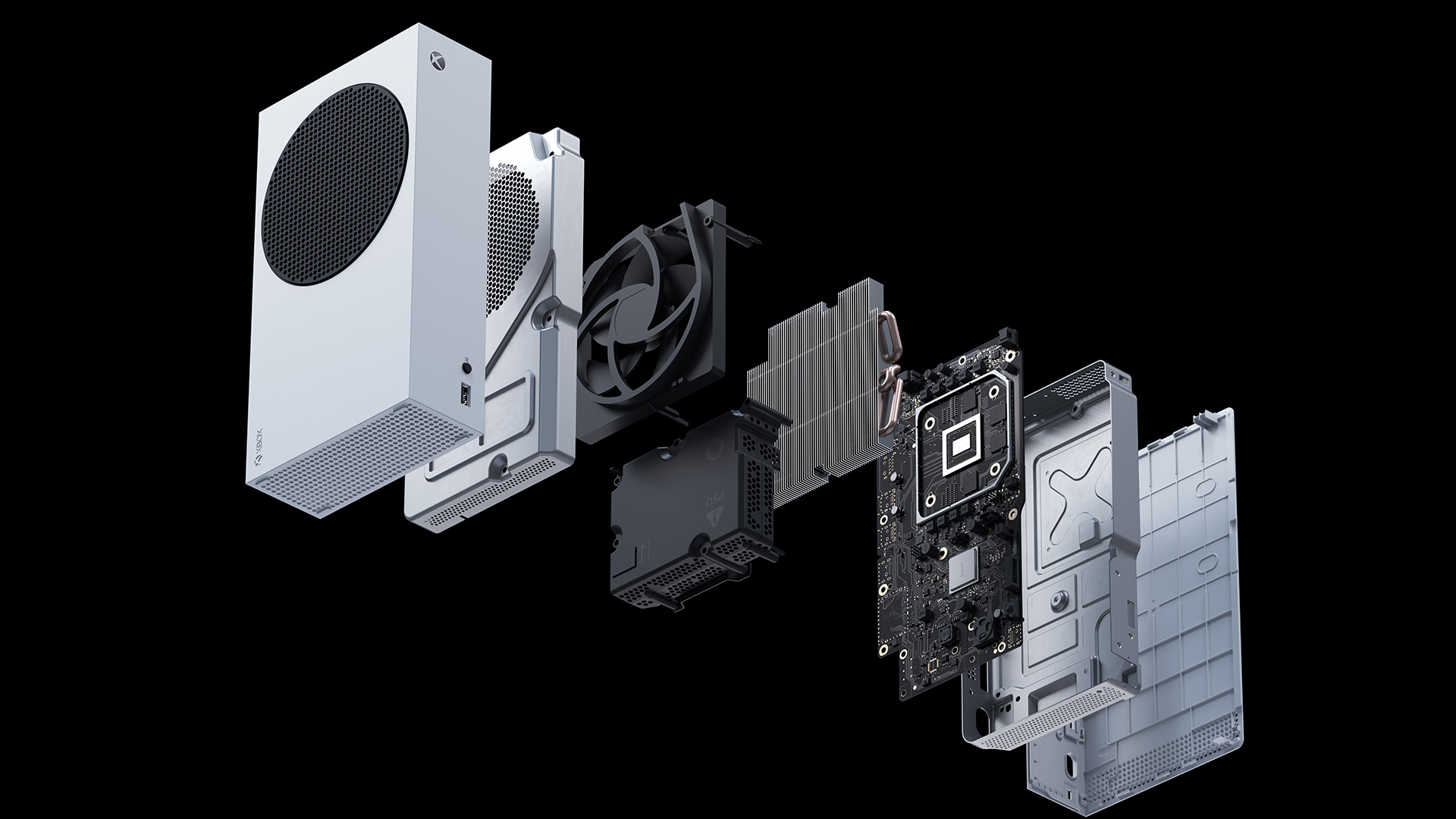 If you are familiar with the Xbox One, then the menu system of the Xbox Series S looks identical. For the Xbox Series X|S it is all about evolution rather than revolution. Taking the lead from PC gaming, the Series S and Series X are really just more advanced Xbox Ones, just as a 2022 PC works in the same way as a 2016 PC, but faster and with better games. This enables older titles from the Xbox One to work natively with the new console. The extra performance boost also allows some classic Xbox 360 and OG Xbox games to not only still be playable on the Series S, but also look better than ever.

Internally, the main performance difference is between the CPU and graphics processor speed and the console memory. Both consoles share the same components but run at different speeds. The custom AMD Zen 2 eight-core processor runs at a max of 3.8GHz on the Series X and 3.6GHz on the Series S. Whilst the CPU frequencies are virtually identical, the graphics processors, both based on AMD’s RDNA 2 technology, are significantly different. The Xbox Series X’s native 4K graphics are powered by a 12 TFLOPS (52CUs at 1.825GHz) GPU whilst the Series S has a TFLOPS (20CUs at 1.565GHz) for pushing out a max resolution of 1440p upscaled to 4K if necessary. The Xbox Series X GPU also sports 16GB of GDDR6 RAM compared to the Series S’s 10GB. 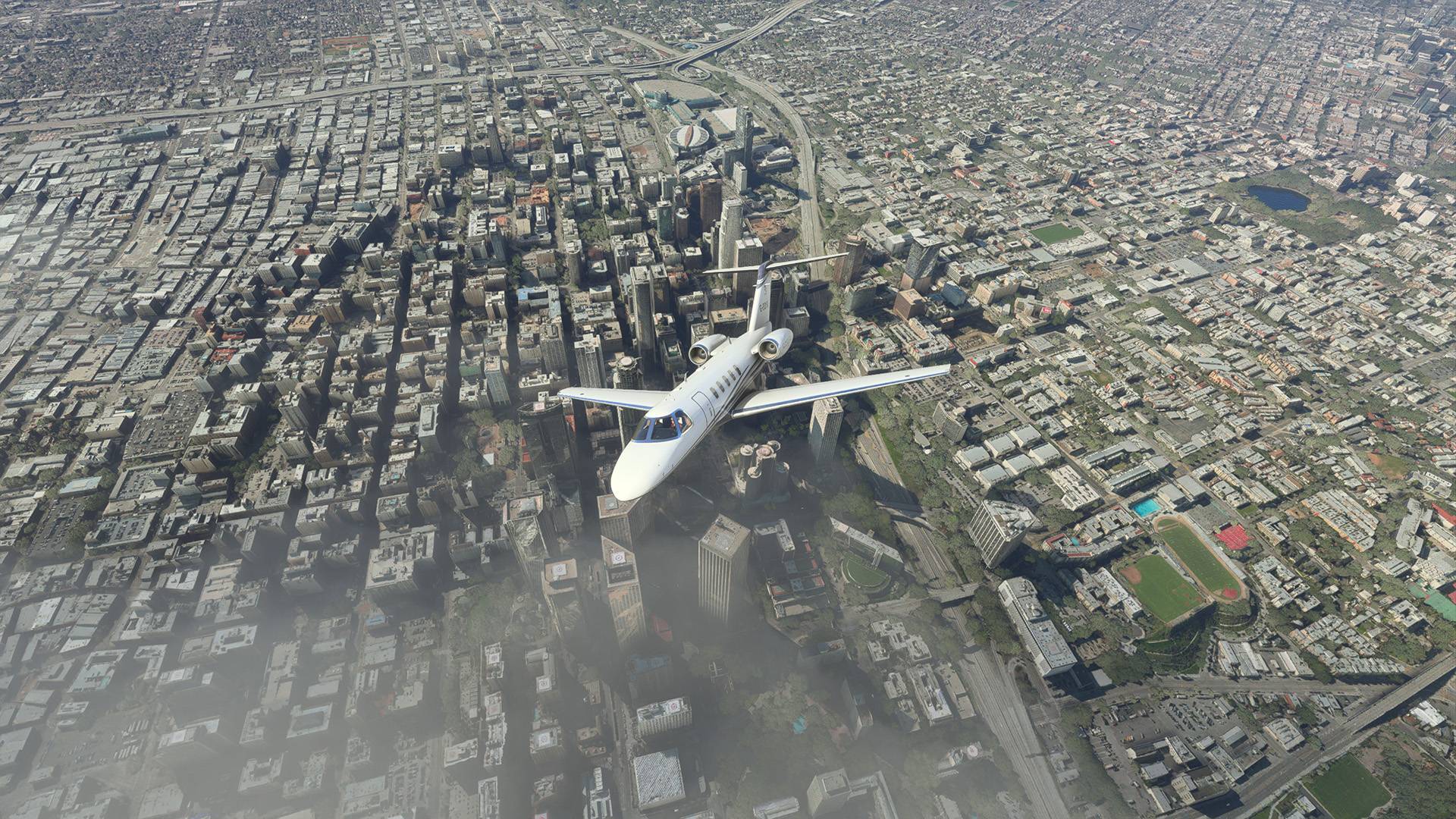 Specifications aside, I found playing games like Halo Infinite and Microsoft Flight Simulator with the Xbox Series S on a 1080p TV had no discernible reduction in performance over that of the Xbox Series X. The Xbox Series S still managed to offer up performance improvement for many of my existing Xbox One games, and even a few Xbox 360 titles (most notably Red Dead Redemption which looks amazing on the Series S).

Perhaps the best way to get the most out of an Xbox Series S is via Microsoft’s Xbox Game Pass.

This monthly subscription fee service grants players access to a massive catalogue of games that can be downloaded to the system for free. All of Microsoft’s first-party games are included in the subscription on day one with other third-party titles coming and going on the service. At the moment there are nearly 200 games available to download and play, some of which, like Halo Infinite, are top-level AAA games worth nearly $100 to buy.

The Xbox Series S is a very powerful and capable game console. It provides a nigh-on identical gaming experience to that of its more expensive big brother. For the more casual gamer, the initial $450 investment in the Xbox Series S and a AU$10.95/NZ$12.95 a month game pass subscription is all you need for an endless supply of games. The AU$15.95/NZ$19.95 Game Pass Ultimate adds cloud gaming on your mobile devices, additional games from EA Play, and the Xbox Live Gold online multiplayer service (with more free games).

if you want a more affordable Xbox console, or perhaps an extra console for the spare room, the Xbox Series S has you covered. Add in an Xbox Game Pass subscription and you are all set. 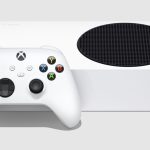