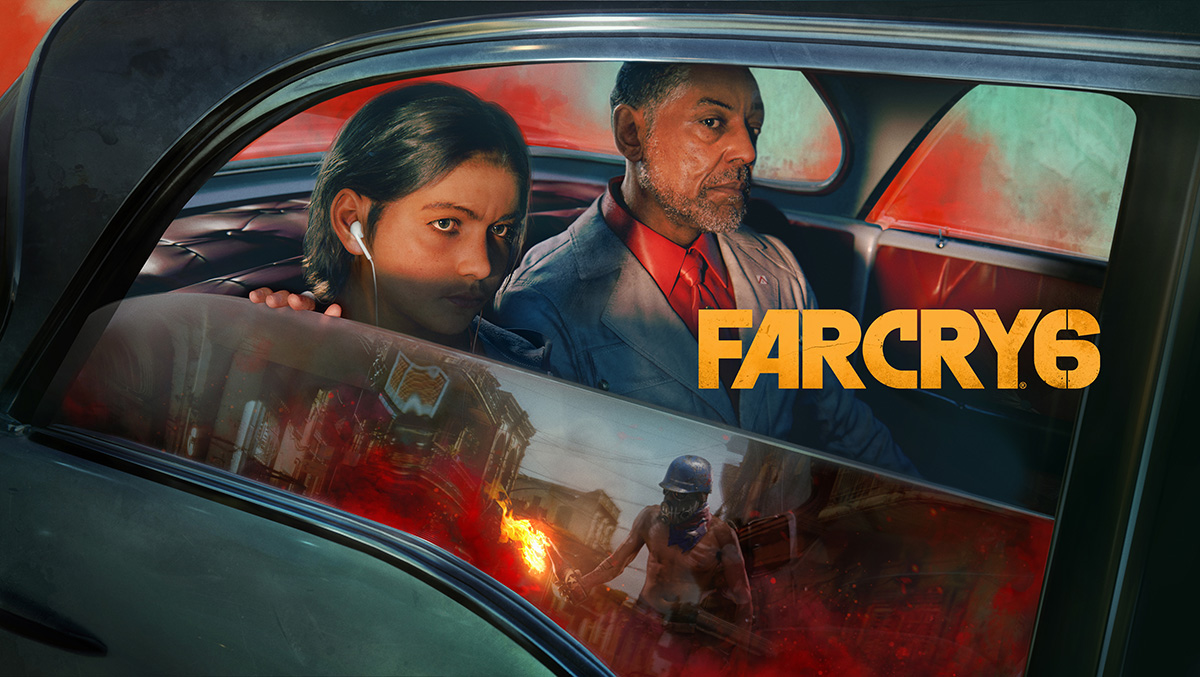 In tapping actor Giancarlo Esposito to play Yara’s “El Presidente”, Anton Castillo, Ubisoft may have given its Far Cry series the scariest villain yet.

And that’s no mean feat considering Castillo is up against the psycho Vaas (played by another Breaking Bad alumni, Michael Mando), fellow dictator/king Pagan Min and cult leader Joseph Seed. Esposito’s turn as Gus Fring in Breaking Bad, as well as Moff Gideon in The Mandalorian, makes him a great choice for the brutal leader of the thinly-veiled analogy for Cuba, the island nation of Yara. 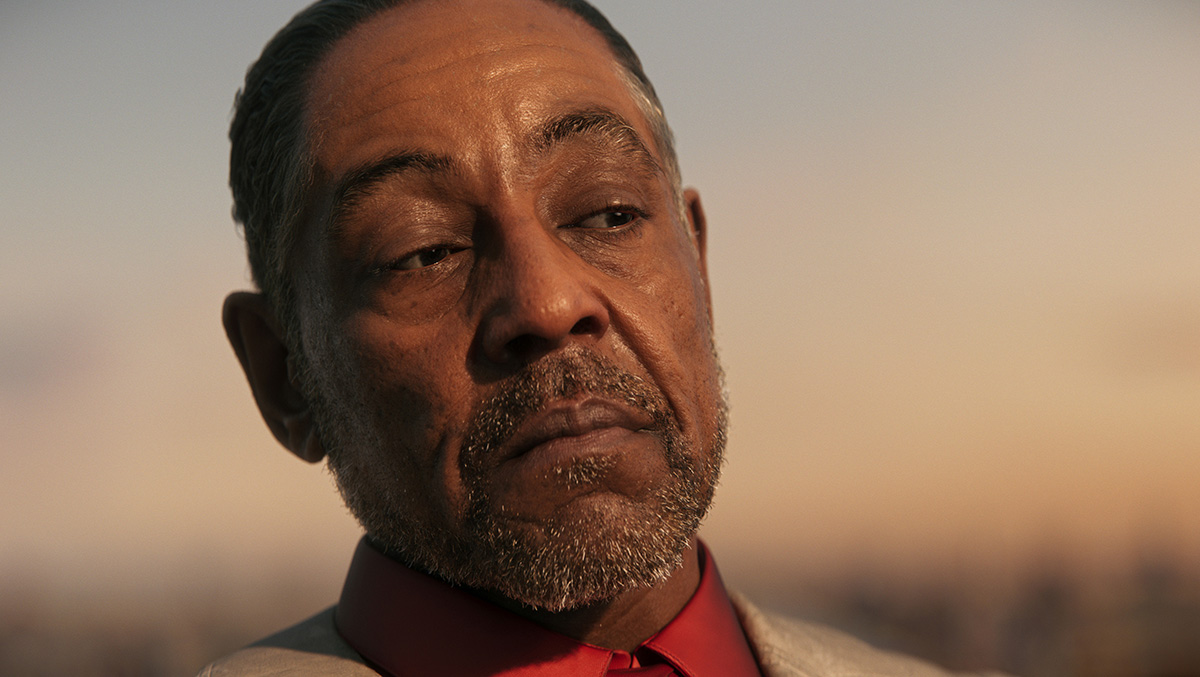 As with the previous games, Far Cry 6 is all about exploring, and engaging the enemy either head-on for some first-person shooter mayhem or picking them off stealthily. Most of the time, despite best intentions, the missions end up with the hail of bullets, fire, and explosions.

Far Cry 6 seems a bit of a muddle compared to Far Cry 5. I’m wondering if they are following the inverse of Star Trek movies in that the odd-numbered instalments are the better ones.

Having played through very similar plots in four Just Cause games, I’m not sure that a Latin American setting for a Far Cry game was the right choice, to be honest. Ubisoft, itself, has already included a similar setting in Ghost Recon: Wildlands. 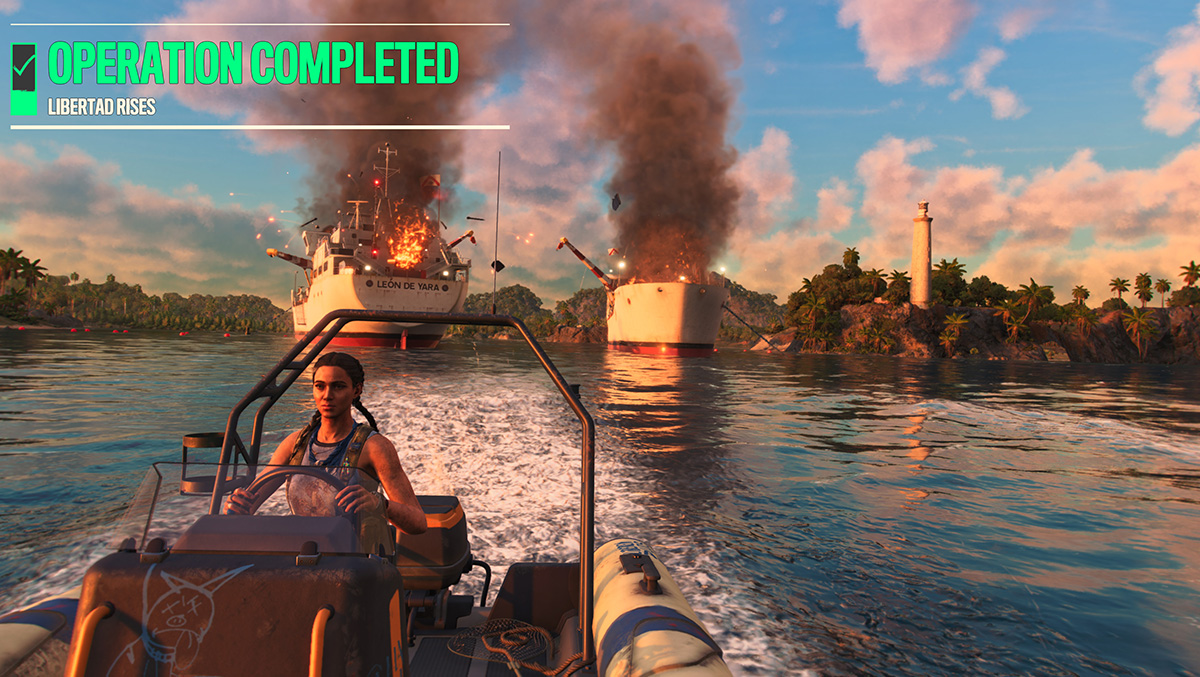 Already embattled with controversy, Ubisoft was likely looking for the least controversial setting for the game. Who cares about killing the soldiers of a merciless dictator?

Perhaps most of the Hanoi Jane entertainment media if they’d twigged that the game was about democracy-loving freedom fighters versus an evil communist dictator.

But here we are, treading the familiar waters of a repressed Latino society ruled by an evil leader exploiting his subjects. Thankfully, the rebels have one man (or woman) army Dani Rojas on their side to cause havoc wherever there’s a military presence on the island.

Just like staying put and enjoying the crab rangoon in Far Cry 4, and refusing to handcuff Joseph Seed in Far Cry 5 whisks players away to an early roll of the credits, Far Cry 6 has a similar quick ending. About two hours into the game Dani is invited to join the rebellion.

There’s also a boat which, if you get in and head off in the general direction of Miami, you get treated to a relaxing ending on the beach listen to how the Yarran military managed to quell the rebellion. Loading up the save allowsplayers to continue by the boat and make the right choice this time.

Far Cry 6 has players travelling across the massive island nation of Yara in a bid to unite the various rebel factions against Anton Castillo’s dictatorship. The game is packed with vehicles including hovercraft, planes, helicopters, and a few exotic surprises. 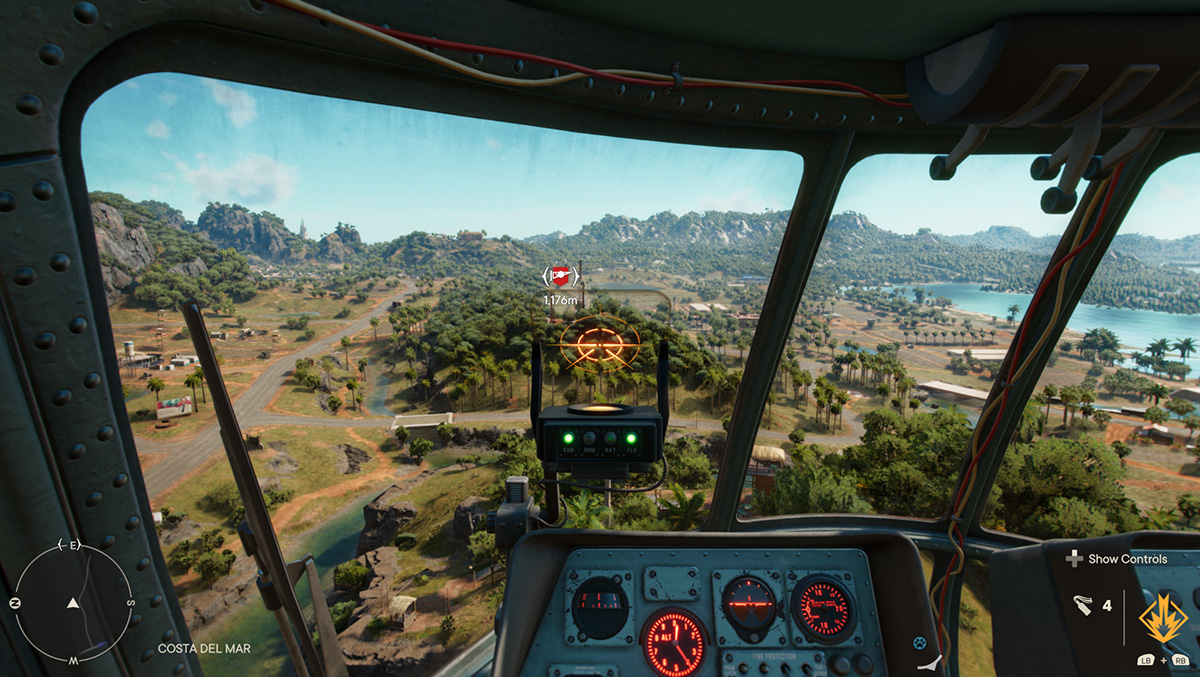 As with previous Far Cry games, the game is mission-based, offering players a selection of mission threads. As is the Ubisoft way, Far Cry 6 throws the gameplay book at players with an almost overwhelming number of things to do. Away from missions, there are installations and checkpoints to liberate.

The game features a cross-play system, via Ubisoft Connect, that allows progress to be saved in the cloud and resumed across platforms. It doesn’t work quite as easily as it does with Assassin’s Creed Valhalla (whereby you booted up the game and your save was there for you be it PC or Xbox).

Far Cry 6 requires players to manually upload their save at the end of every session if they want to continue elsewhere and manually download it on the other platform. A bit clumsy, but better than nothing. It was this feature that enabled me to test the game across several different devices. 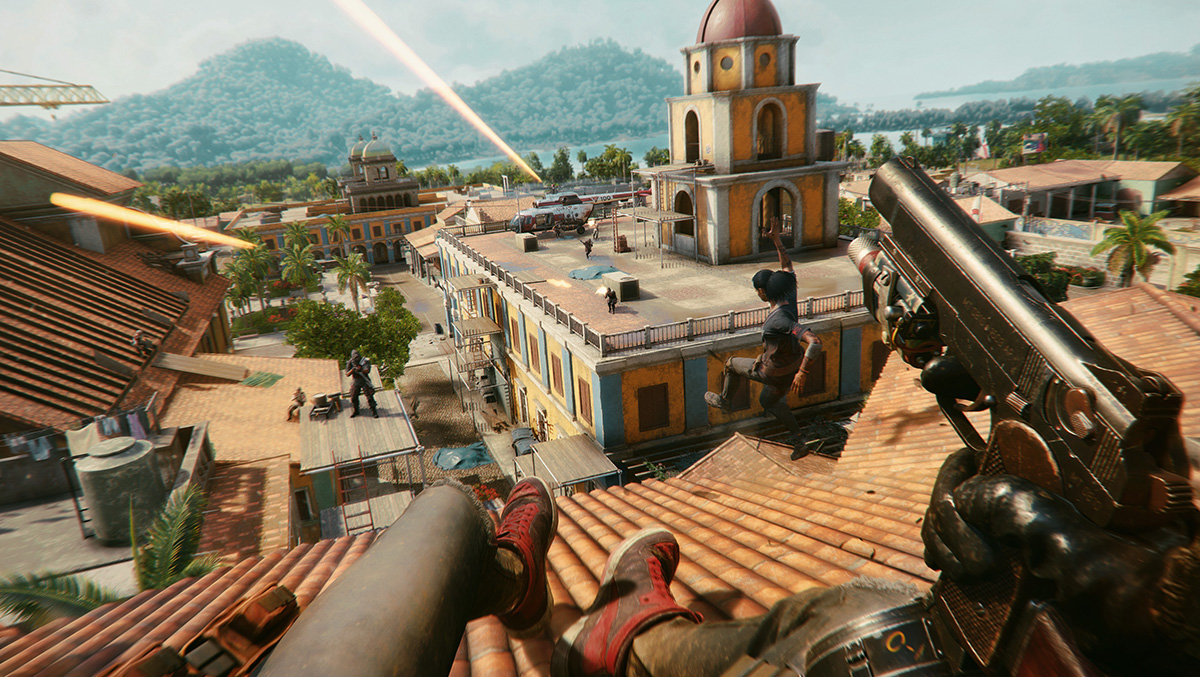 My review was intended to be on Xbox Series X, but AMD ANZ sent over a PC code as well to test on their Radeon RX 6900 XT GPU. I also had an AMD-powered ASUS laptop, the RTX 3090-equipped review rig, my trusty Xbox One X, and my semi-retired OG Xbox One to try the game on.

I started with the Xbox One. Interestingly, the Xbox version hadsome different DLC included which meant every time switched platforms I needed to change equipment and amigo. A little odd. The game was very playable with no problems. I’d say that the game is running at about 30 frames-per-second at 1080p on the OG XB1.

I was pleasantly surprised with the high quality of the game on the Xbox One X in 1080p. I found Assassin’s Creed Valhalla virtually unplayable on the XB1X (I didn’t even both try it on the OG XB1)compared to the Xbox Series X and PC versions. The Xbox One X gameplay is faultlessly smooth. Yara’s lush vegetation looked inviting and the sunsets beautiful. Players opting to play on the Xbox Series X are getting the full Far Cry 6 experience. 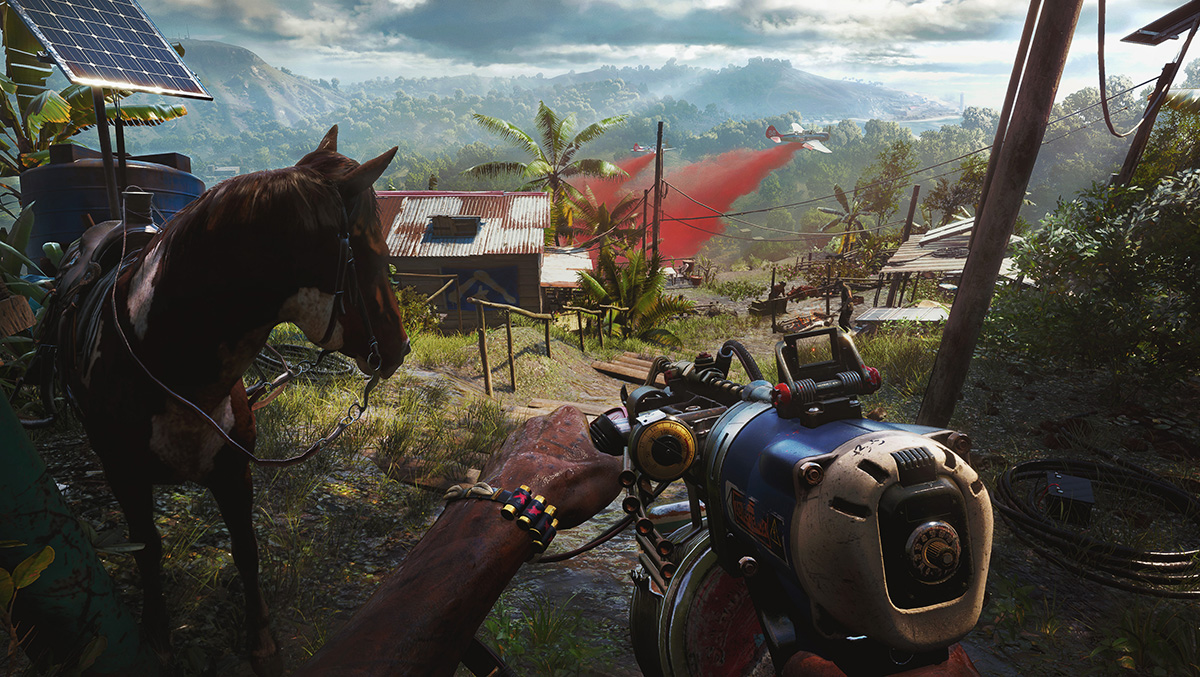 Moving on to the Xbox Series X in 4K HDR. Ubisoft’s decision to leave out ray-tracing on the top-end consoles is a bit of a disappointment as this is one of their big selling points. Still, the Xbox Series X maintains a decent framerate running at 4K. There’s an optional HD texture pack that can be downloaded to crispen the visuals.

The PC version has all the knobs and whistles if you have a powerful enough rig. That means high-endPC owners will get to play the game with ray-traced shadows and reflections. For some added bling, there’s also an optional HD texture pack, but this requires a GPU with an eye-watering 11GB of RAM.

The game looks good, with some beautiful environmental effects. Behind this next-gen veneer is a graphics engine in need of an upgrade. The character models are good, but we should be moving towards more realistic-looking people rather than the still very good but not quite there character models we have been enjoying up until now. 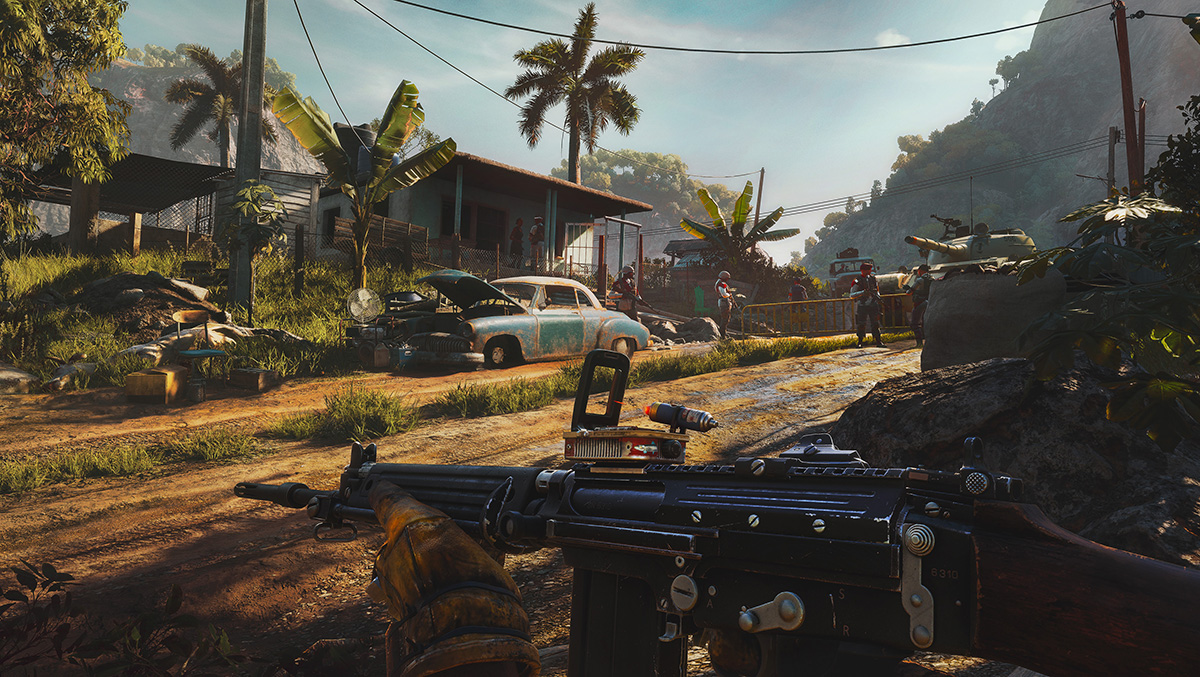 Whilst many outlets choose to get all excited about Ubisoft’s HR management, they overlooked a very real reason to get all triggered and upset. The game features cockfighting. The usually unassuming and apologetic Ubisoft seems to have taken a leaf out of Rockstar’s “couldn’t give a sh*t” book.

Players can partake in Tekken-style poultry combat the likes of which will chill any card-carrying PETA member to the bone. However, for a game that lets you shoot dogs in the face, the cockfighting is pretty tame and tongue-in-cheek. But if you are one to get easily offended, I wouldn’t let that stop you.

I’m all for games being packed with things to do. I know there are lots of reviewers that moan about Ubisoft games being “too long”, something that I completely disagree with. But Far Cry 6 does seem to be a bit disjointed. Whilst Far Cry 5 kept me engaged, Far Cry 6 seems to lack narrative discipline. It feels a bit disjointed like Far Cry 4 and Far Cry New Dawn. 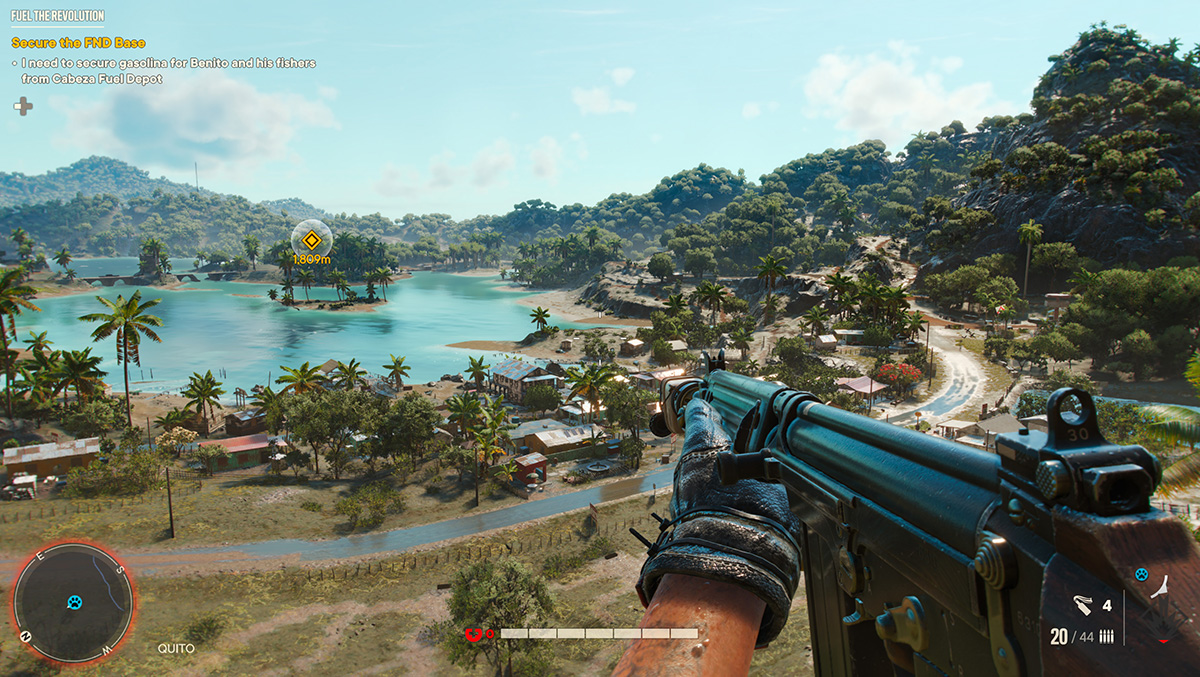 The game has an extensive weapons modding mechanic via workbenches found in HQs. The only thing is once I’d got a decent silenced rifle and sidearm, I was pretty much sorted. Same with the special backpack weapons. The first one I got, that allowed me to fire rockets, was the only one I needed. I felt I should be swapping them out, but didn’t see the point.

Far Cry 6 does offer players the same over-the-top gameplay that has been a hallmark of the series since Far Cry 3, at least. The huge sandbox environment encroaches players to find their own story carve their own path in amongst the set missions and activities.

The game scales and runs well across all of the Xbox consoles from the OG Xbox One to the Xbox Series X. High-spec PC owners get the cream with the definitive version of the game.

The game does offer great value for money, an intriguing if throwaway plot, and all the tools to cause as much mayhem across the nation of Yara as you want. It’s awell-presented, polished presentation set in a beautiful setting with engaging, if unfocused, gameplay. 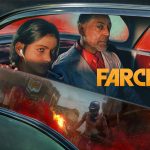