Helldivers: Turn Up the Heat Review 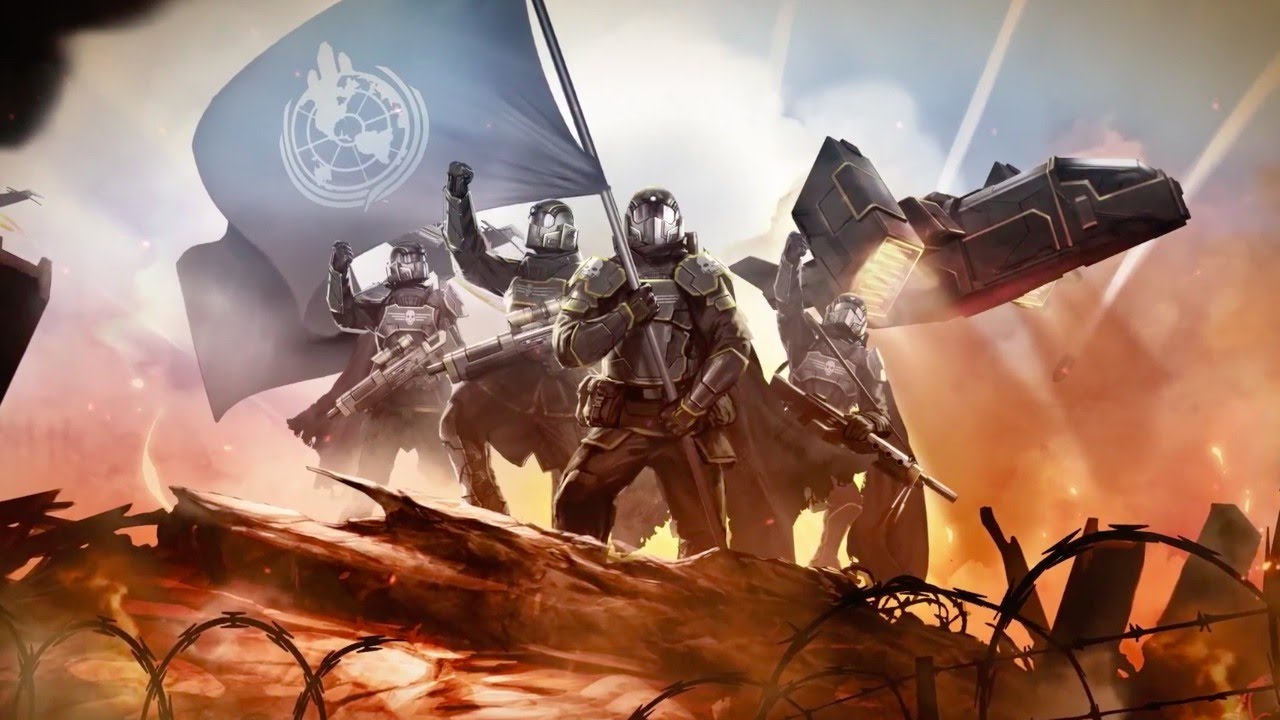 Come on you apes, do you want to live forever?!

Anyone who remembers the deliciously cheese stuffed cinematic pile of goop that was Starship Troopers will find Helldivers familiar.

Exposition is delivered via thinly veiled propaganda videos showing the heroic men and women of the “Helldivers”, the armed forces of the distant futures “Super Earth” fighting off hordes of Alien foes, including of course, ravenous Bugs.

The writing of is about as subtle as being hit around the head with a brick in a sock but luckily, none of us bought this game for its story. 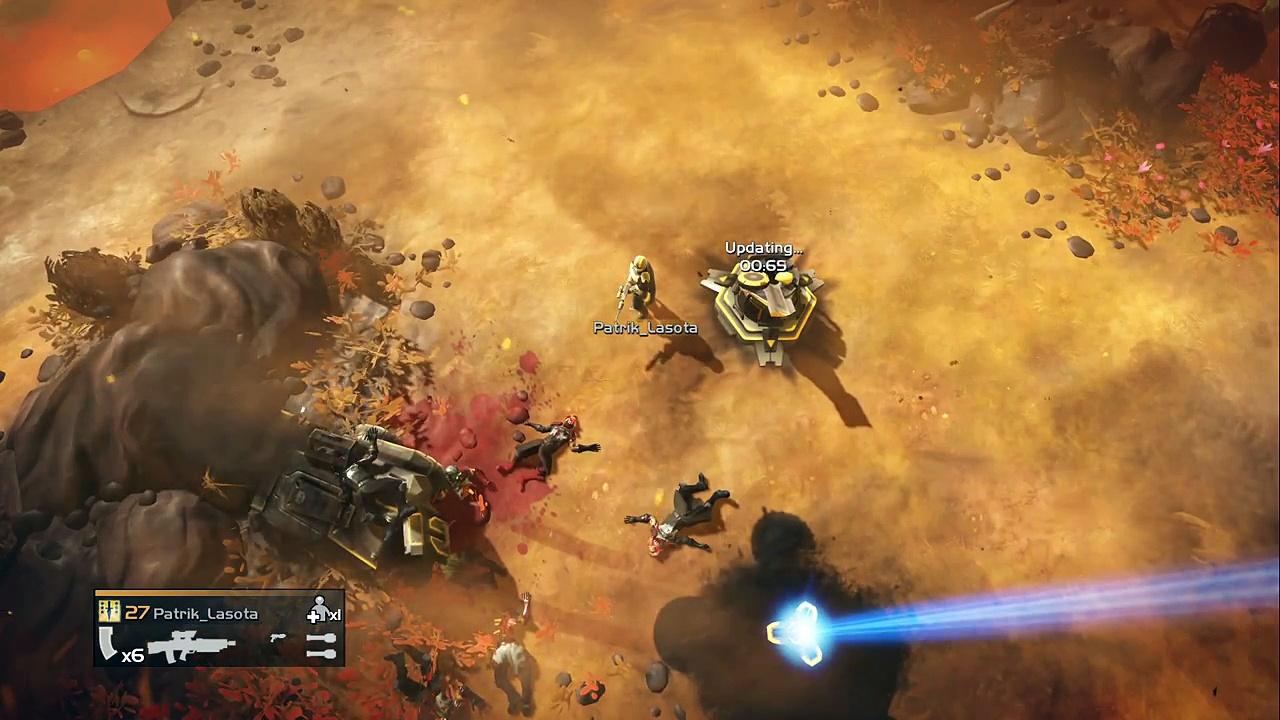 Originally released back in March, this online only co-operative twin stick shooter manages to mix up relatively simplistic base elements into a fresh looking package which is as maddeningly fun as it is occasionally frustratingly difficult. Now a free expansion has been released titled “Turn up the Heat”, adding a welcome extra layer of depth to the game.

One of my previous issues with Helldivers was a lack of variety in gameplay objectives; this has been addressed in Turn Up the Heat, with both environments and missions becoming more diverse. New map types have been included, unsurprisingly these are for the most part, flaming volcanic Hellscapes. 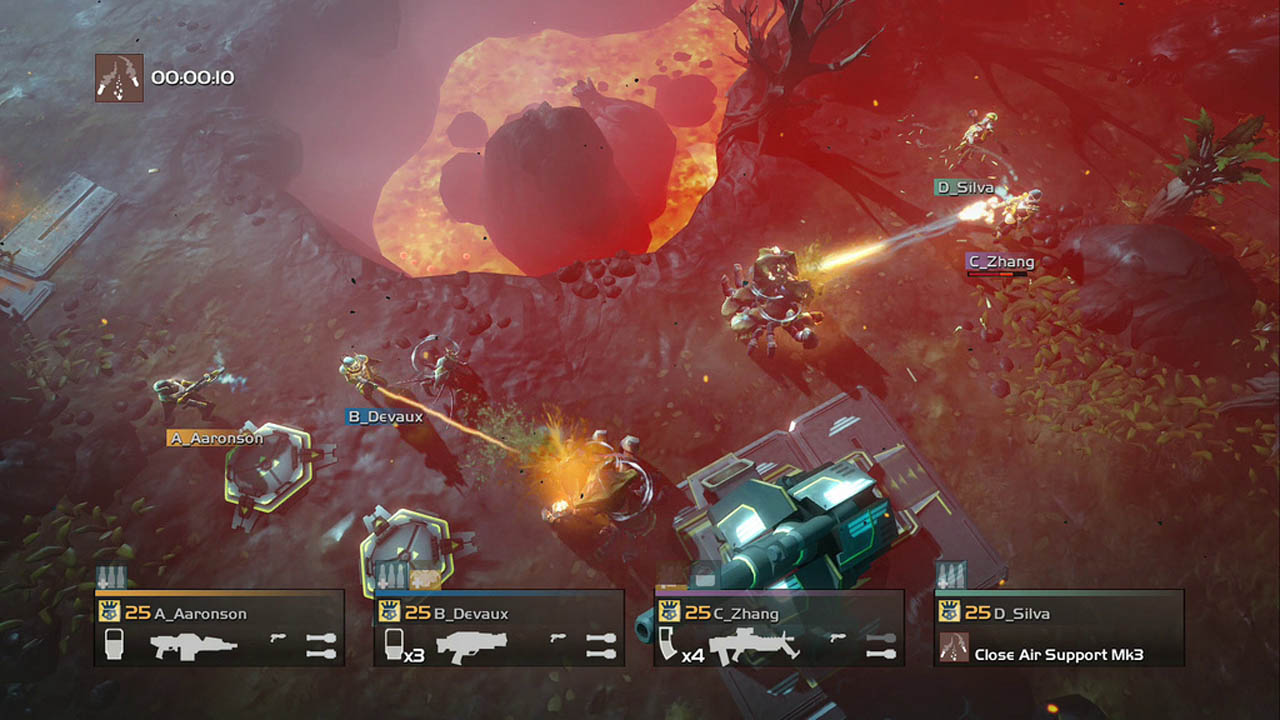 What is most enjoyable about the new map types is their ability to dynamically affect gameplay, when lava spouts from deep underground it will instantly incinerate any players standing nearby, narrow walk ways arch over flaming abysses, making it all too easy to dive to your doom while trying to take cover.

Helldivers has always a punishing experience, the basic hand holding devices present in so many other shooters are simply non-existent here, no automatic reloads, remaining bullets being discarded if you replace a clip before its empty, realistic friendly fire and no in all combine to make making it through a mission without dying to be an achievement. 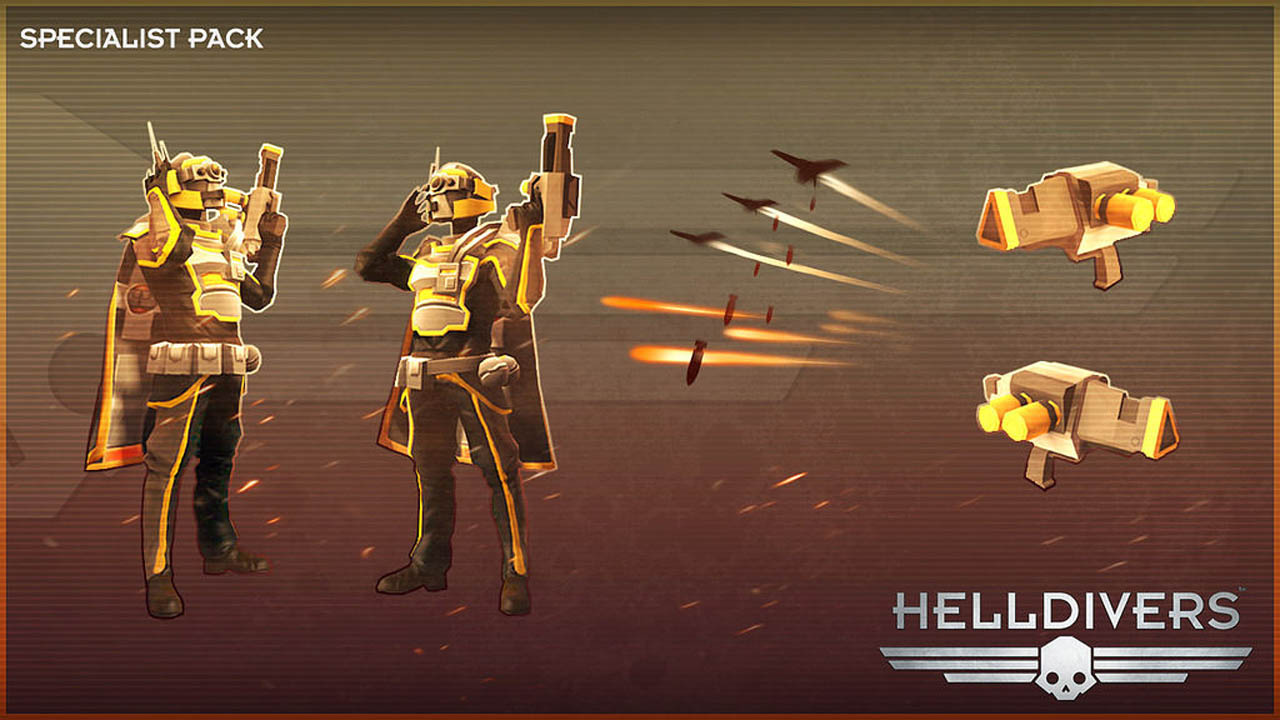 The new Map types add an extra layer of danger for players, as they must now constantly watch their positioning not only from their team mates field of fire, but from the very literal fire that threatens to consume them at various points.

The enemy roster has been updated as well, with each of the games three enemy races boasting a powerful new enemy type to balance out game play. 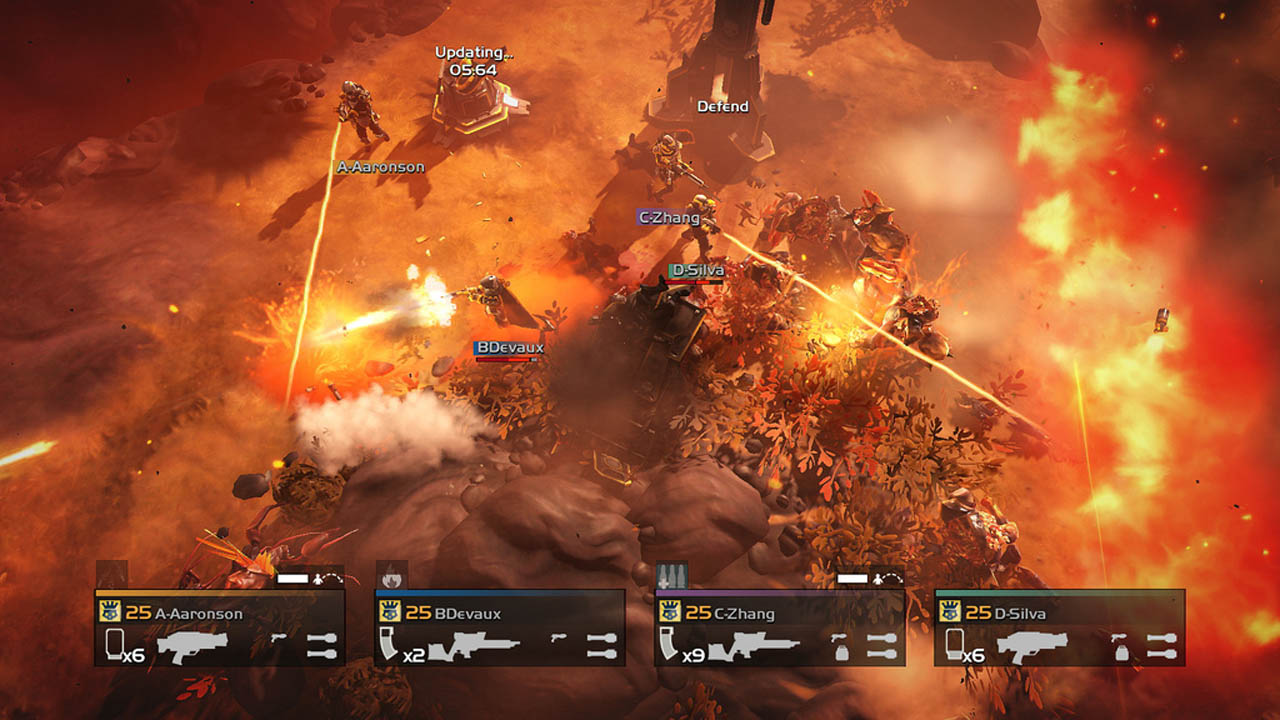 The Bugs have the high damage “Impaler”, the Cyborgs have the fast and infuriating Cyborg Hound, and the Illuminate can a powerful support unit, the Obelisk.

These new enemy types help avoid each encounter from becoming a formulaic slaughter of mindless enemy drones, as the AI will respond differently based on the enemy types present. The level cap has been raised, albeit slightly, giving the most seasoned Veterans room to progress once more. 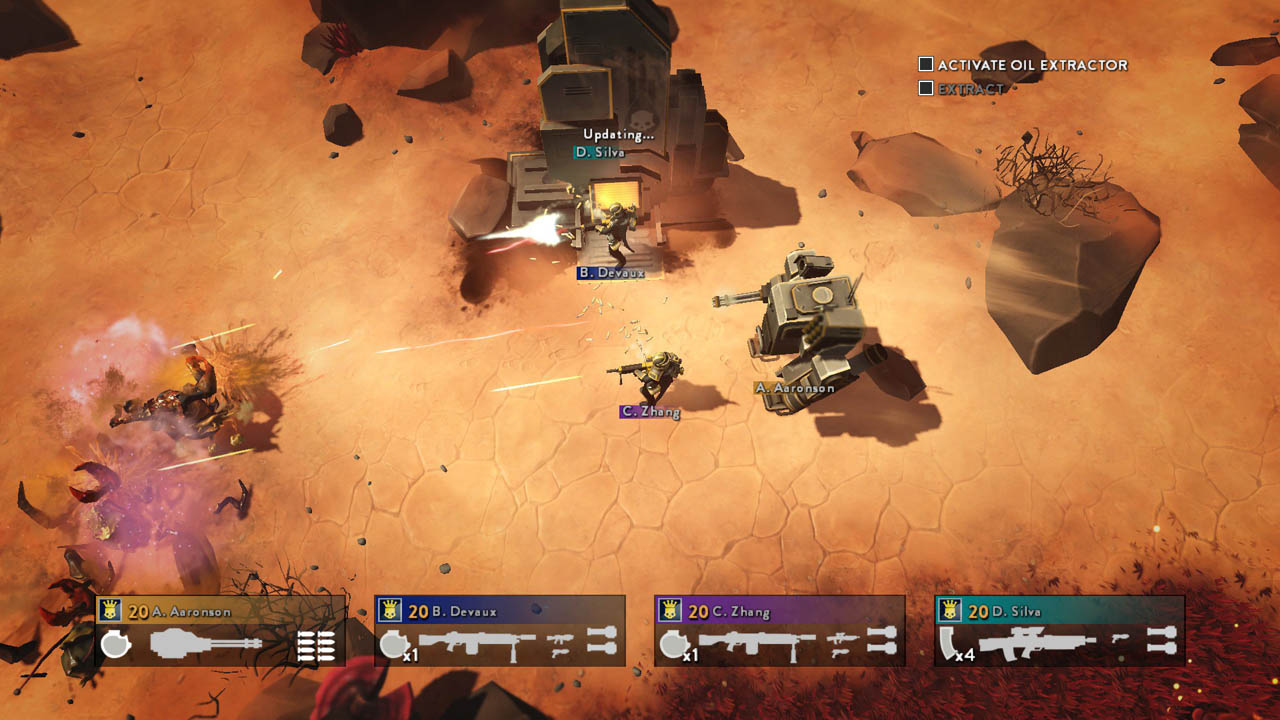 New map objectives have been added, interrupting the previously monotonous tasks of go to point A) defend, go to point B) Extract.

For example, Helldivers must now search for unexploded Ordinance with an unwieldly metal detecting tool which negates their ability to fire a weapon while being used, while their team mates hold off the inevitable hordes that attack. 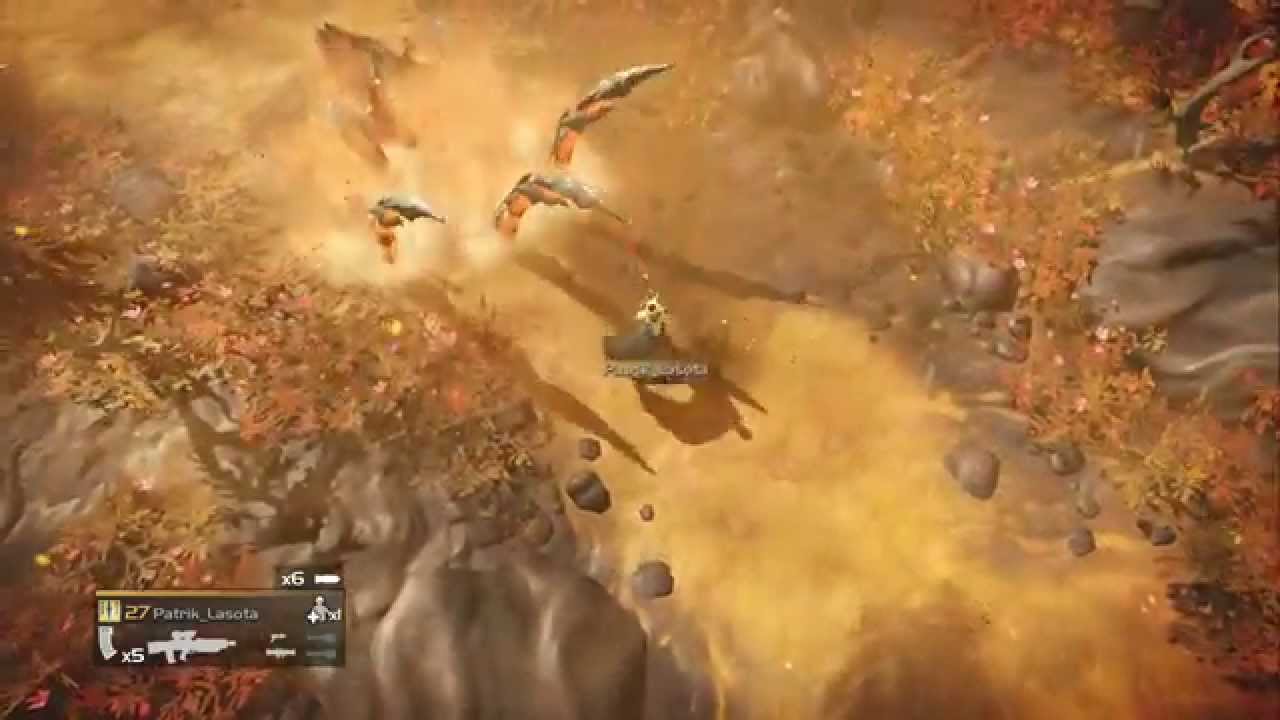 Each of the new objective types incorporate the familiar Helldivers mechanic of forcing the player to perform a DDR style series of button prompts while performing certain actions, which sounds simple enough but when two of your squad mates have fallen and you are surrounded by enemies closing in for the kill, even the most basic acts of timed co-ordination become a struggle. 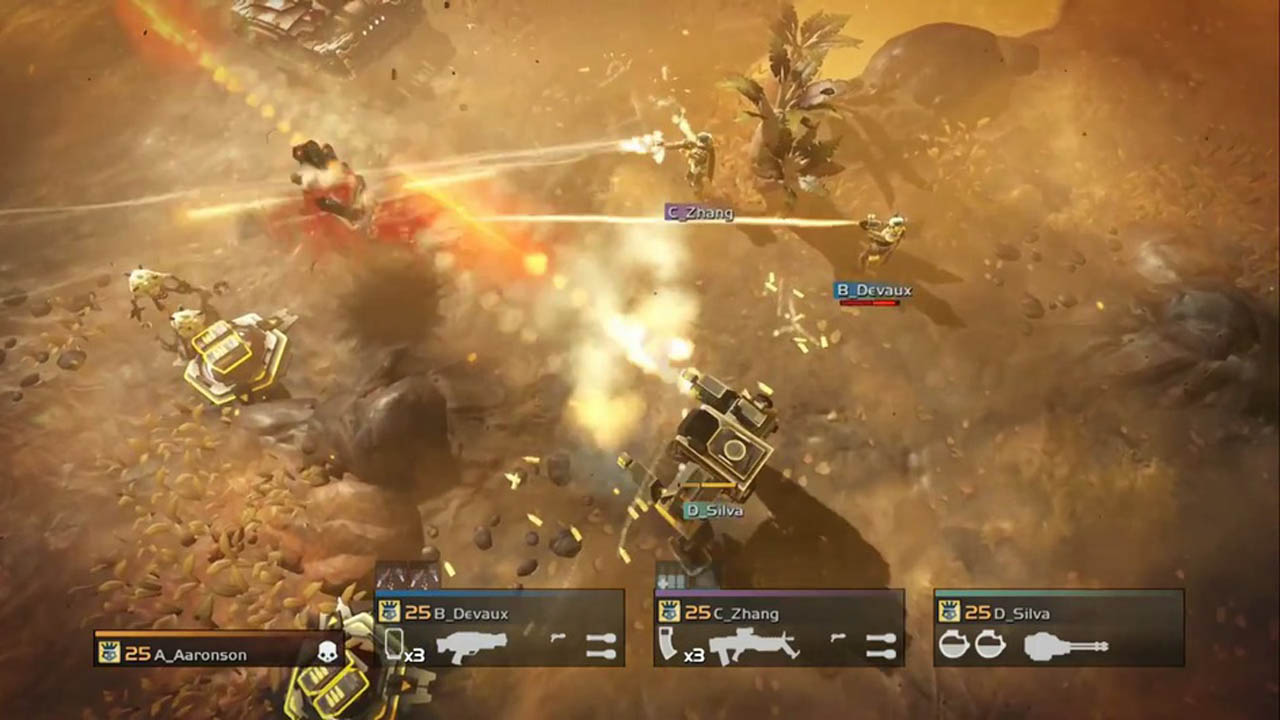 Helldivers definitely looks its best on PS4, the lighting and particle effects are all crisp and vibrant and help to add heft to the games already impressive arsenal of weaponry. With the current Turn Up the Heat iteration, this has become even more noticeable, as the flame effects of weaponry and environments look phenomenal and large scale battles are visually rich without the frame rate ever dropping noticeably. 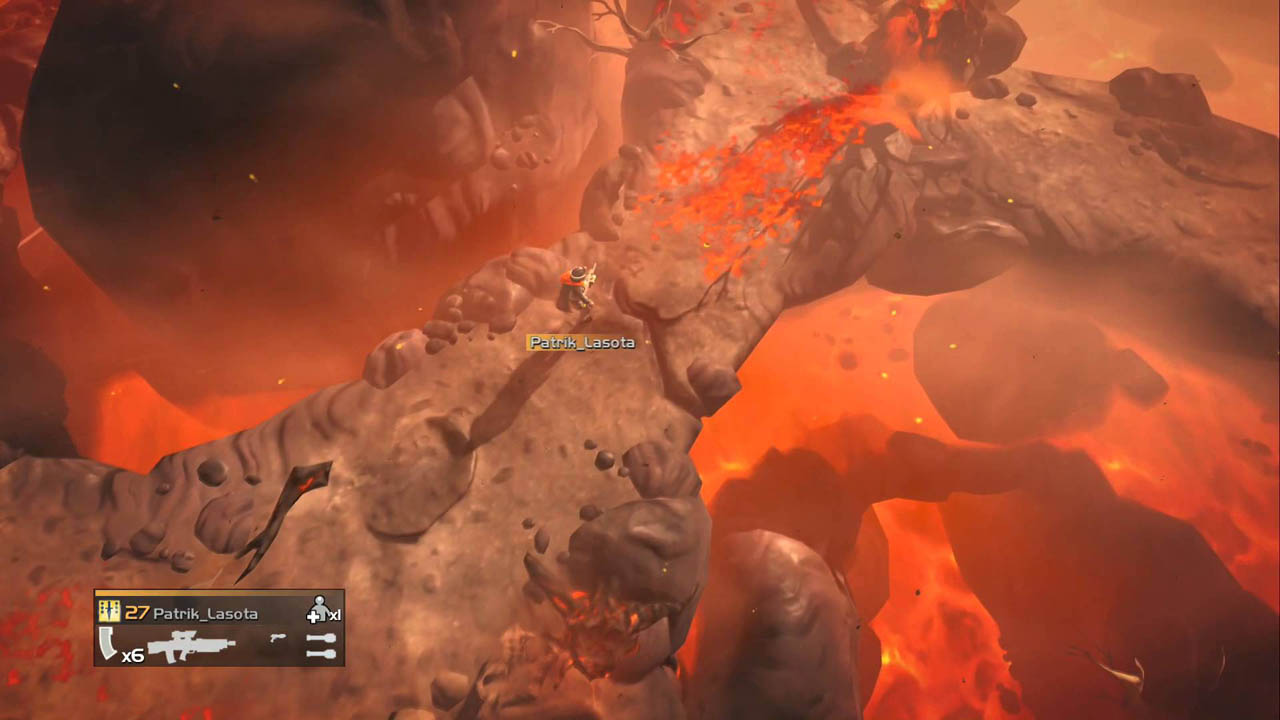 With the Turn Up the Heat DLC now freely available to all, Helldivers has become an even more dynamic and enjoyable shooter than it already was, while this expansion hardly re-invents the game, it high lights all of its best aspects for a price tag of absolutely nothing, and is a more than welcome addition.