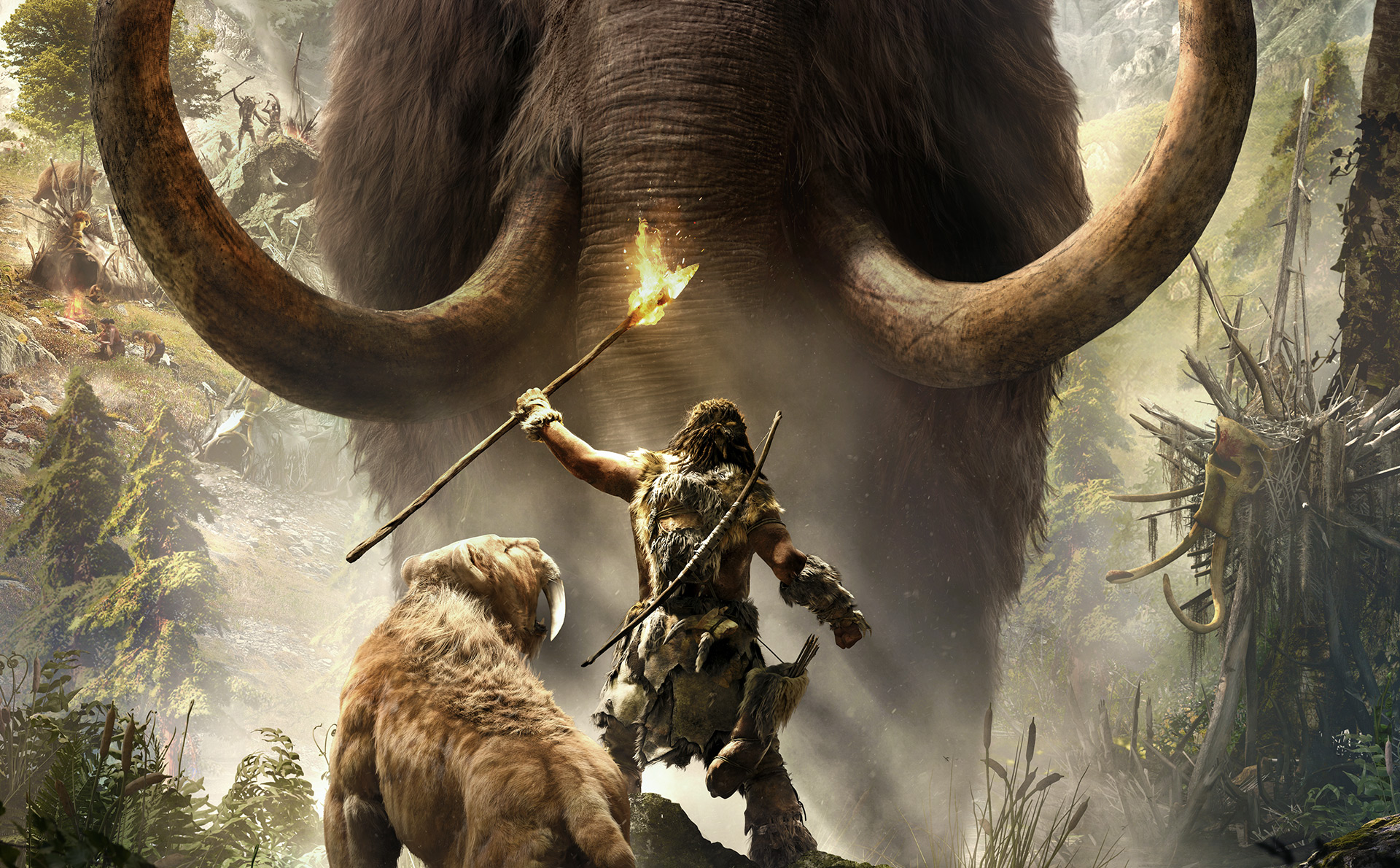 Ubisoft takes us back in time, to the lush, yet brutal prehistoric land of Oros, with the latest instalment of their best-selling action-game series, Far Cry Primal.

I thought that 2013’s weird retro sci-fi entry, Far Cry 3: Blood Dragon, was as left-field as Ubisoft could go with their Far Cry games, but I was wrong, very wrong.

When I first heard that Ubisoft where swapping the modern-day arsenal of weapons that have been a staple of the Far Cry franchise since 2004 for the sticks and stones of prehistoric times I was more than a bit sceptical.

But what Ubisoft have actually done with Far Cry Primal is, under the guise of their award-winning first-person shooter series, given us a fully-fledged cave-man simulator. And it is exactly what the series needed.

The French publisher has a tendency of sticking to formulas that work for them, to the detriment of originality. Their Assassin’s Creed franchise, whilst still providing players with great adventures, has, of late, lost a lot of its edge, the game mechanics becoming derivative and lacking any real innovation. 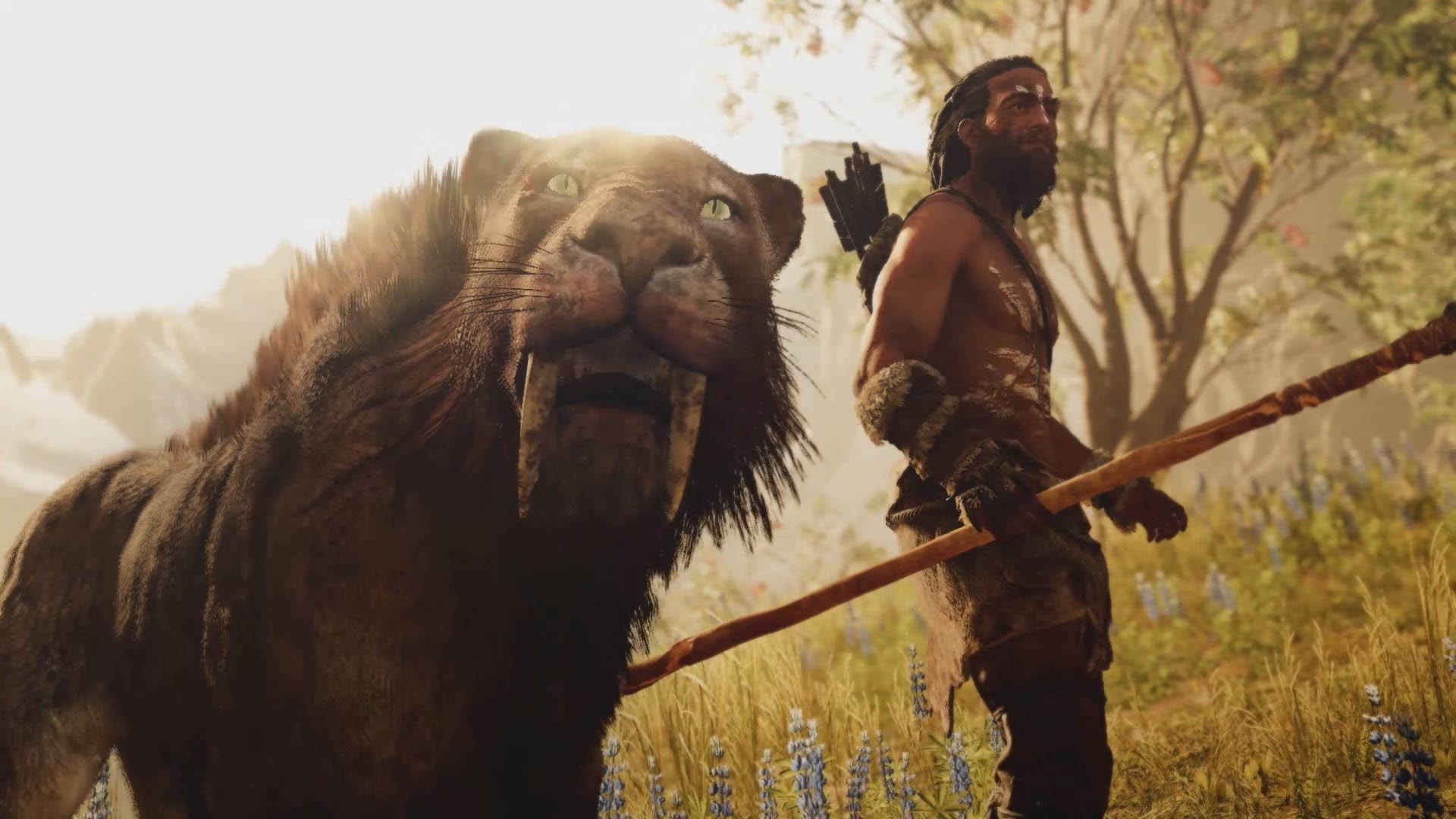 Many of those same game mechanics can be found across all of Ubisoft’s games, including Far Cry.Instead of letting the series rest, like they have with Assassin’s Creed, the publisherhas turned Far Cry on its head. Far Cry Primal takes away all those mayhem inducing weapons and fully embraces open-world gaming.

It’s 10,000 BC (or BCE if you are a member of the politically-correct revisionist history sect). Stone-age hunter Takkar finds himself separated from his clan whilst hunting mammoth. After finding Sayla, another member of his Wenja people who have been living alone, Takkar sets out to reunite his kinsmen and establish a village in his new land of Oros.

As Takkar, your primary task is to survive in a world out to kill you. It’s shocking to think that all of us are only here today due to the tenacity of our ancestors and their determination to survive in such a harsh environment. It’s quite sobering and, for me, those thoughts added quite a lot to my gaming experience. 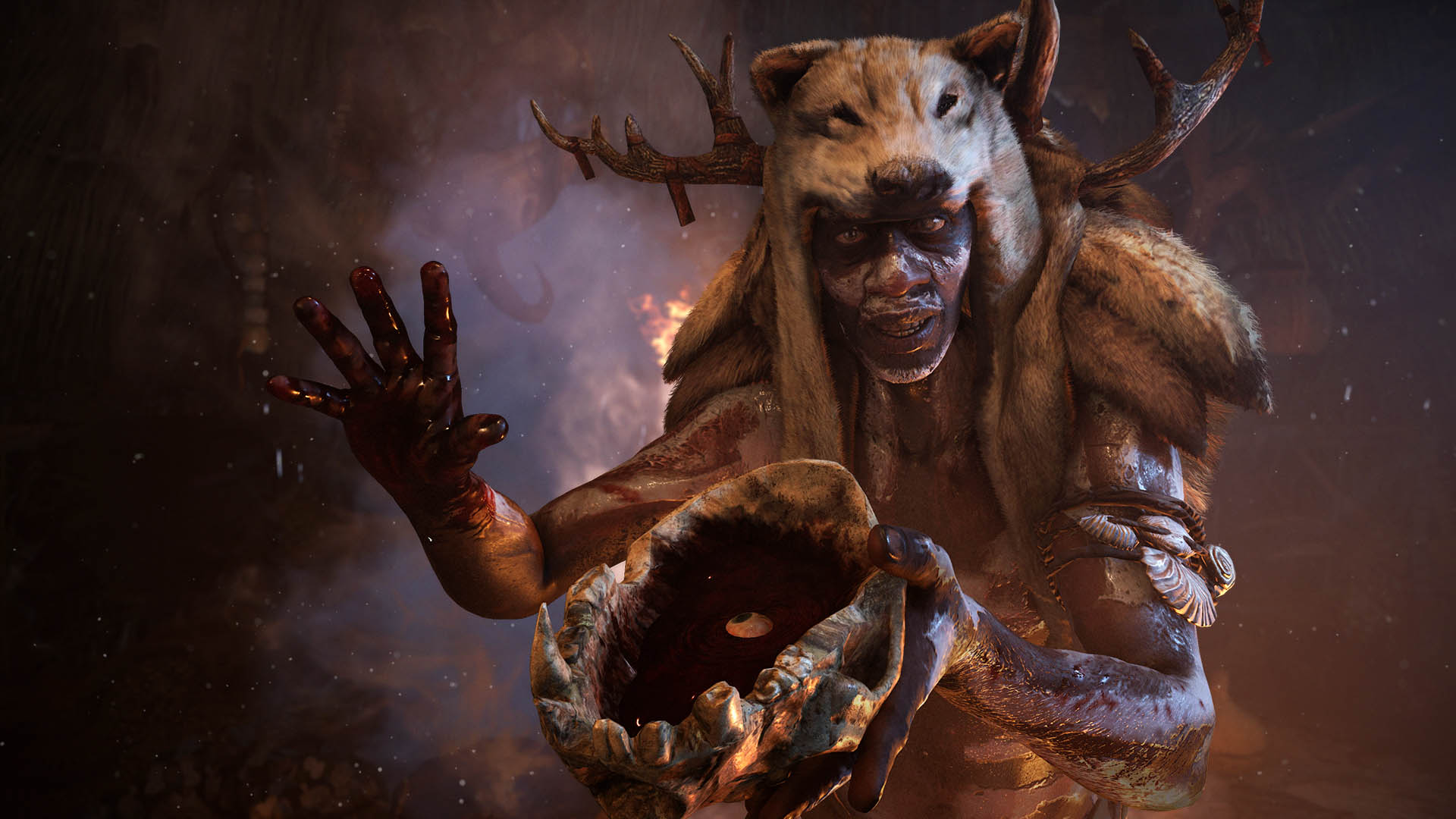 As I mentioned above all those familiar Ubisoft/Far Cry gaming tropes are present, albeit slightly better disguised that they usually are. The map is expanded as players explore the valley of Oros in what will, one day, become central Europe. Dispatching rival tribesmen and capturing their camps unlocks a fast-travel points and extra resources. Rather than feeling awkward, I found the usual Far Cry game mechanics made more sense in this setting than in the previous games.

Resources and crafting, a mechanic that has become increasingly important in the series, plays a huge part in Far Cry Primal. Everything that Takkar uses must be fashioned from raw materials. Hunting wild animals and gathering material is the key to survival in the game. You need arrows, spears and clubs to fight and you need raw materials to build and upgrade your village.

The game features a robust skill tree unlocked as Takkar gains experience. Some skills and equipment crafting options only unlock once a someone with the relevant skillhas joined your village. This gives players the freedom to explore Oros, but also gives the developers the ability to keep things interesting as better equipment is introduced, opening up the game. 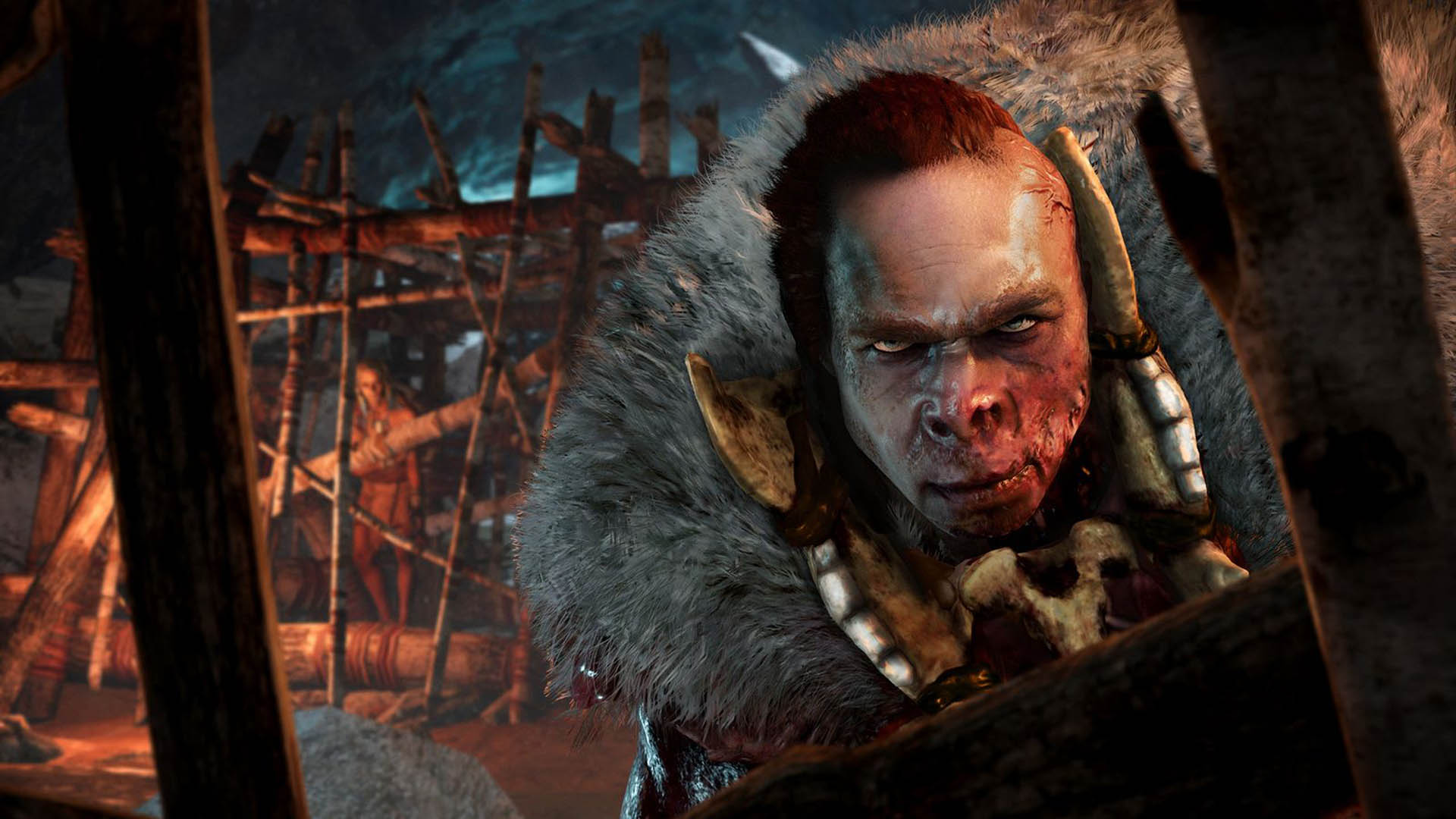 Oros is not a friendly place. Dynamic events and encounters mean that there’s never a dull moment in the game. You soon feel like you are in a living, breathing world where things are seemingly happening all around you, regardless of if you are there to witness them or not.

Watching a group of rival tribesmen from afar as they get themselves slaughtered by a herd of mammoths is fascinating, showing off the organic way that the environment works. Things like this get you totally immersed in the game. Wandering about will have you freeing captured Wenja, interfering with enemy hunting parties and fighting aggressive wild animals.

Whilst waving a burning club may see off many small predators, there’s plenty of wolves, bears, mountain lions and other critters that the see Takkar as their next meal. 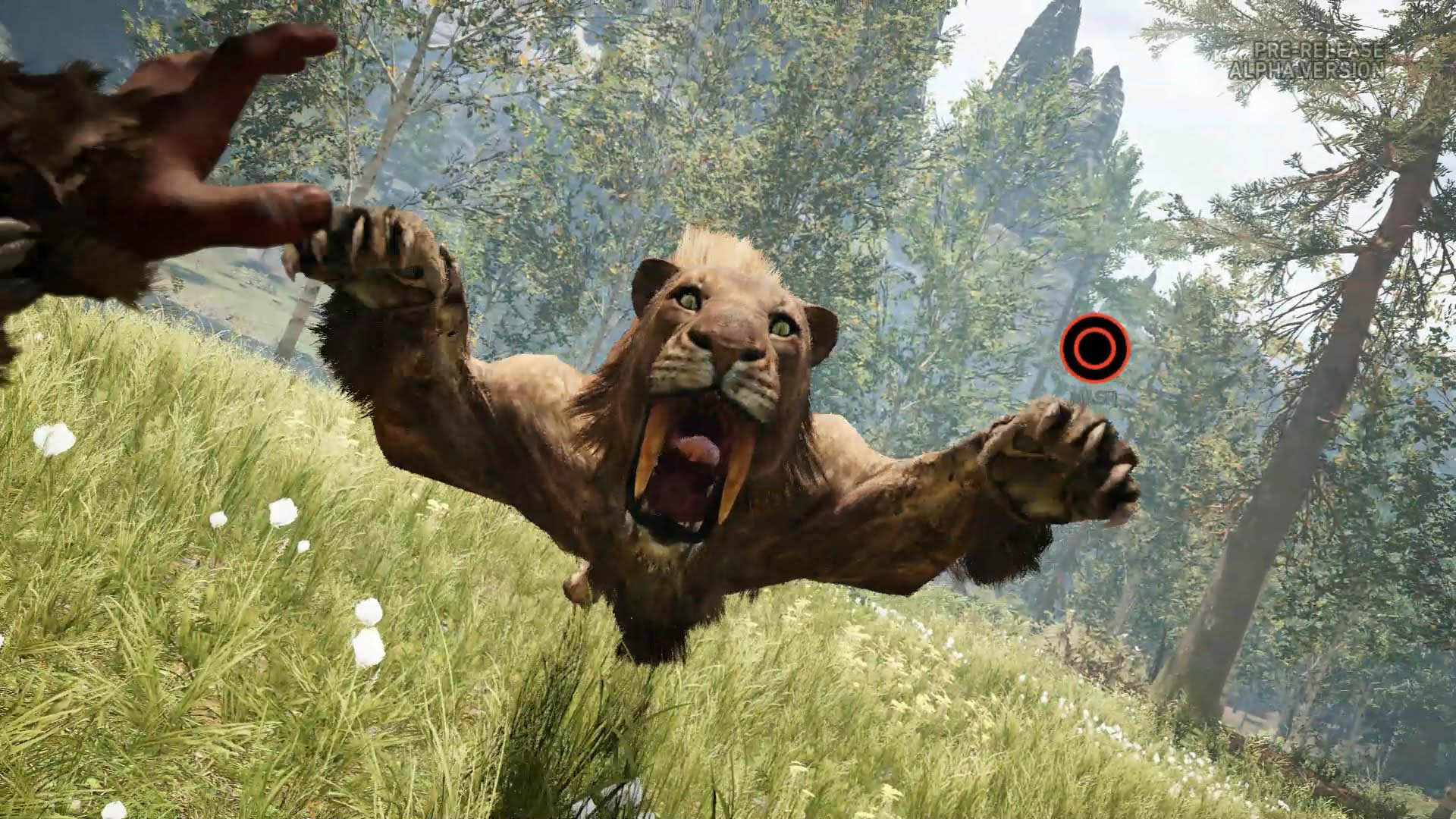 Takkar’s beast master skills grant him that ability to tame wild animals and have them as pets and protectors. Many other animals will stay well away when you are accompanied by your pet mountain lion. Later in the game Takkar earns the ability to ride Mammoth, sabre-tooth tigers and other beasts.

The fire mechanic introduced in Far Cry 2, really comes into play this time. Firing flaming arrows at the enemy’s huts can spread through the whole village. Running around setting fire to foliage can also be a good method of taking out the enemy.

The game’s plot isn’t complex, but the method of story-telling is incredible, especially when you think not one word of any known language is spoken in the game- the translation subtitled in English. The superb character animation affords the developers such high quality digital acting, allowing them to create believable, prehistoric people that, although they may be speaking a foreign tongue, can still convey emotion in their faces and body language. 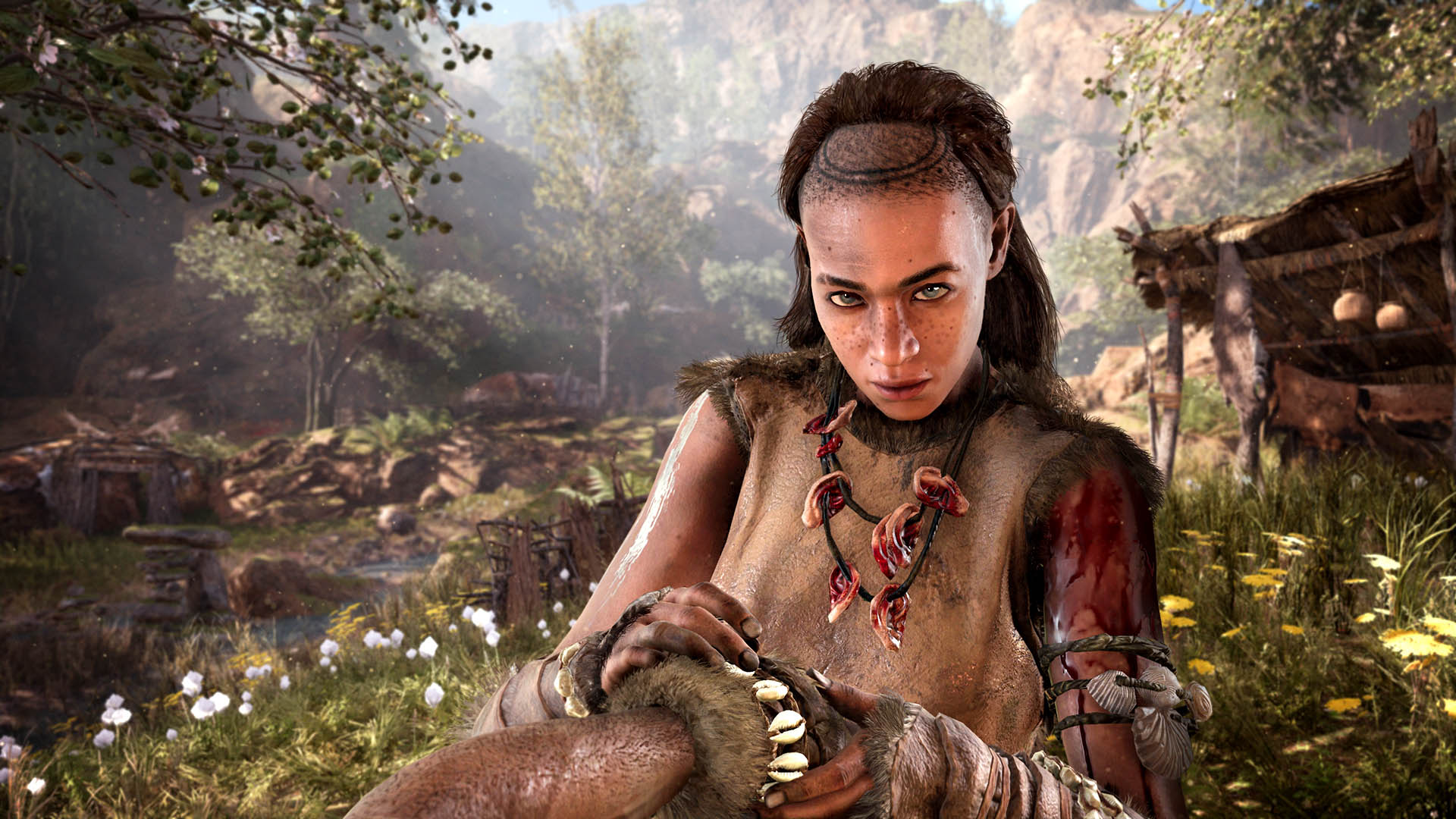 The graphical fidelity will be familiar to fans of the series. Ubisoft’s refined Dunia 2 engine has been powering the franchise since Far Cry 3. The added power of today’s systems has enabled the developers to go wild and immerse us in a prehistoric ecosystem full of lush plants, trees and roaming animals. The game’s day/night cycle shows of the engine’s beautiful atmospheric effects and treats us to some stunning sunsets and awesome morning light.

With the addition of Far Cry Primal, Ubisoft’sFar Cry franchise become a bona fide anthology series, no longer a slave to its predecessors. There’s know no reason not to thrust us into a medieval setting, or even send us on an escapade in the far reaches of space. Far Cry Primal crowns Ubisoft as the kings of action-adventure video games development.

Fans of modern weaponry are going to feel a bit like a fish out of water, at least to begin with. The lack of a cohesive narrative will also not be for everyone. I hope, however, that those seeking something more like the Far Cry of old will embrace the amazing anthropological journey that Far Cry Primal beckons you to experience.