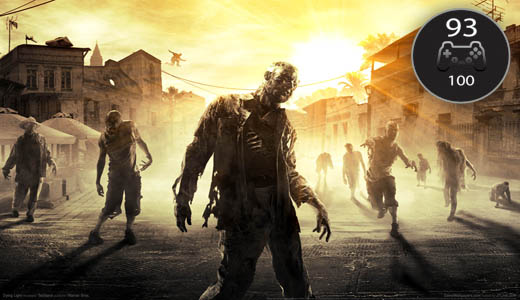 I was more than a little anxious as I placed Techland’s new zombie game, Dying Light, in to my PlayStation 4. I’d been following its extended development for nearly two years and, whilst I liked the idea, what I’d seen in my early previews didn’t inspire much confidence in me.

Suffering delay after delay, it seemed that Dying Light was causing the veteran Polish developer a bit of a headache.

I’m a great fan of Techland, going all the way back to Chrome in 2003, but it was their 2006’s western shooter, Call of Juarez that really blew me away. Unfortunately Call of Juarez: Bound in Blood wasn’t quite as good as its predecessor and the third game in the series, the modern-day Call of Juarez: The Cartel absolutely sucked. 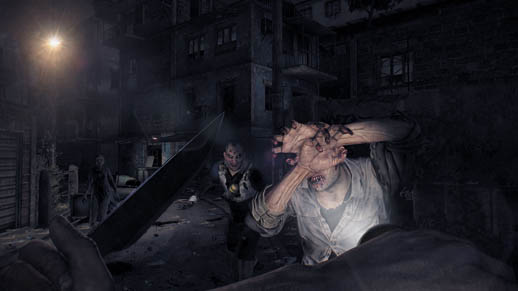 Techland switched genres for their next series with zombie survival-horror game, Dead Island and its follow-up Dead Island: Riptide. Despite some glitches, the games’ unique blend of open-world mission-based objectives and a rather inspired crafting mechanics, along with a beautiful Pacific setting, made them a favourite with fans.

The Dead Island franchise is owned by publishers Deep Silver who are, with the help of Spec Ops: The Line developers Yeager Developments, currently working on their own sequel. This has freed up Techland to take their ideas for a zombie game in a new direction. 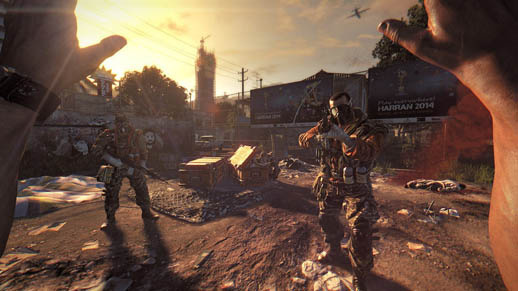 Whilst the Dead Island games are not the madcap affairs that Capcom’s Dead Rising games are, there is a certain tongue-in-cheek manner about them, especially with some of the weapons that you can build.

Dying Light is by comparison a much darker and more serious affair.

You play Kyle Crane who, in pretty much the first scene in the game, ends up getting bitten by one of the infected – Dying Light’s word for zombies. Crane’s mission in the zombie-infested city of Harran is to make contact with the self-styled leader of the bandit faction, Reis, and recover an incriminating file.

Crane is directed in this task via a radio link with his agency, the Global Relief Effort, who are supposed to be helping the stricken city. 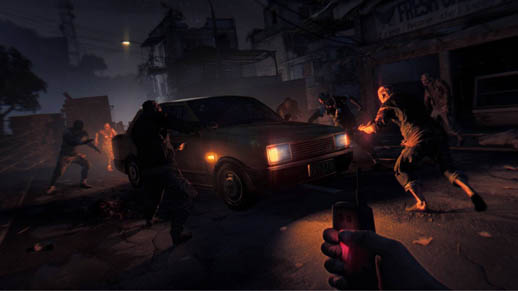 Whilst Cranes task is clear, his allegiance is not, as he must choose between his mission, which also seems to entail disregarding the welfare of the people and helping the group of survivors holed up in one of the city’s towers.

The game’s atmosphere takes a lot of inspiration from the zombie movies from the seventies and eighties, complete with the very foreboding electronic soundtrack that sounds straight out of Lucio Fulci’s Zombie Flesh Eaters. 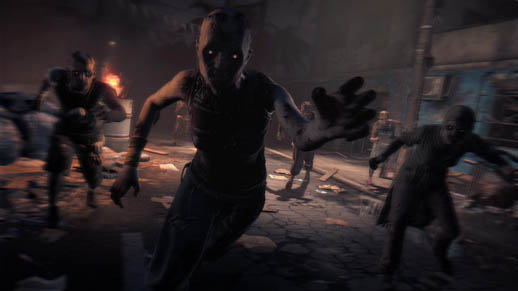 Visually, Dying Light is pretty awesome. The developers have chosen a more muted colour palette that give the environment a more realistic look.

Whilst the zombies do look a tad generic, especially compared to the clever way Capcom created the unique undead in Dead Rising, the city looks fantastic. Packed full of detail, zombie infestation or not, Harran is a place crying out to be explored.

Unlike in the Dead Island games, Dying Light does not have driveable vehicles, at least at the moment. Rumour has it that these may be added at a later date.

The only way to get about in the game is on foot, which is actually better than it sounds. 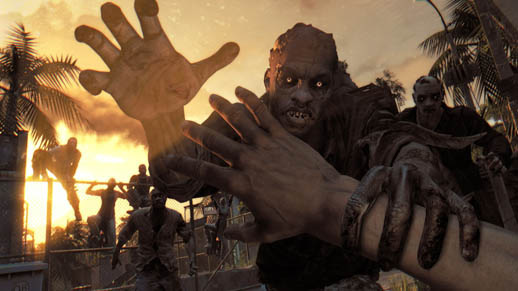 The game’s locomotion system is inspired. Think Assassin’s Creed in first-person. Crane is a very athletic type and an expert in parkour. The game’s free-running mechanic is pretty exhilarating and works very well. Running, leaping and climbing to get over and around shuffling zombies never gets old. But you still have to pace yourself as too much running without a rest will tire you out leaving you open for an ambush.

The game never breaks from the first-person view, even in cut scenes.

The camera motion as you jump, climb and slide is very organic, totally immersing the player in the experience. Every jump, every grab and every fall feels so real, like you are right there, trying to outrun the undead. 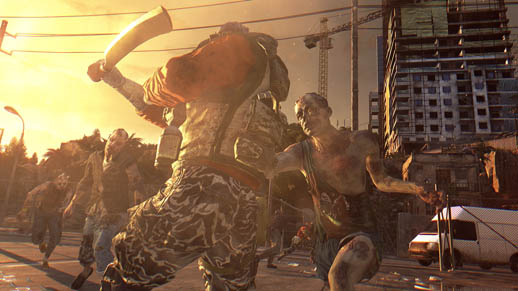 And the more you run around and increase your agility skills the better it gets.

Dying Light has three skill trees, each with over twenty skills to acquire.

Survivor points, which unlock crafting abilities, are earned by, basically, not dying. Every time you expire you lose your survivor points. Jumping about gains agility points unlocking movement-based skills results in making you faster and able to better engage the enemy in a physical tussle.

Power points are gained by entering into combat, which in turn allows you to unlock more combat skills. 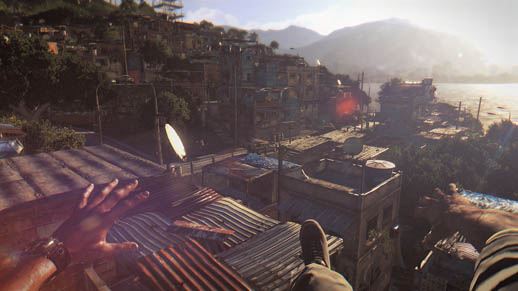 The game’s skill trees are very powerful and can totally change the way you play the game as you increase your abilities. Situations that would have had you cowering at the beginning of the game become a minor distraction as you learn how to handle yourself in this hostile environment.

And it is a very hostile environment.

Whilst the world of Dying Light is not as jam packed with undead as the likes of Dead Rising 3, the game’s infected offer more than enough of a challenge. The zombies come in a few varieties, with the following being the most common. 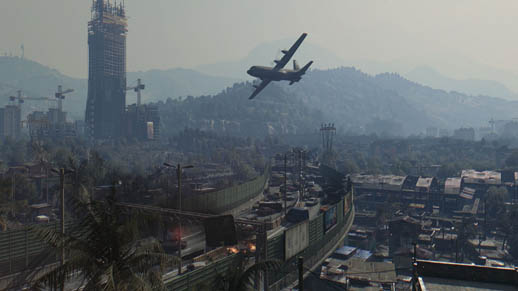 The Biters are your usual George A. Romero shambling type. Virals are the recently turned and are a fast 28 Days Later type of infected. The Hazmat wearing Gastanks are unfortunate members of a clean-up crew that are slow moving with explosive tanks on their backs.

Huge goons carry a lump of concrete on the end of a bit of rebar that’ll knock you flying if you are in its reach. Toads spit a debilitating green goo. Bombers explode if they get too close taking you with them. There are a few more which I’ll leave for you to discover.

This is a bleak simulation of a proper zombie apocalypse. As such, there’s no sense in running headlong into a horde of undead; if anything the game wants you to avoid confronting zombies. 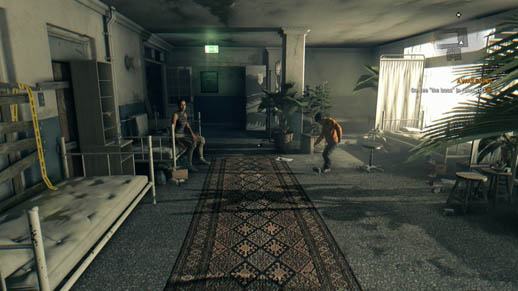 You can wander around the huge open world for hours scavenging and beating the up odd undead. But mainly you will find yourself dodging them and jumping over them, the generic zombie horde becoming as much a part of the landscape as the boarded up buildings. Apart from the odd viral, it is encounters with other people, after the same drops as you, which are likely to cause the most problem.

The GRE continuously airdrop supplies into the city, creating the optional task of recovering their contents taking it to the quartermaster in the tower. If you are lucky you’ll get to the supplies first.

If you are not quick enough you may need to dispatch some of Reis’s men first. These guys are armed and fast, and need to be taken out with care. 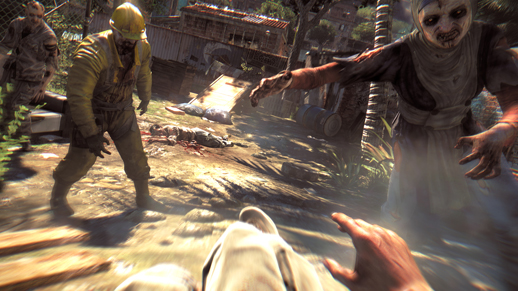 The key to your survival is to explore and scavenge for parts. The city is littered with boxes, some of which have locks that need picking.

Inside are items that can be either sold or used to fashion equipment or craft, upgrade or repair weapons. The game’s crafting mechanic is similar to the Dead Island games, with the discovery of blueprints unlocking some very cool weapon upgrades.

Of course, fallen zombies can also be looted for items, but that’s not always a good idea. Zombies can appear from nowhere and an easy situation can go fubar really quickly. 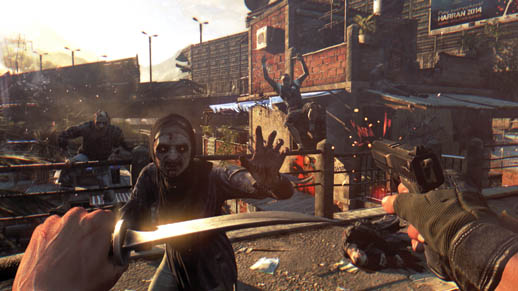 The only places safe from zombies are inside the fenced off safe zones that are scattered about the city, and this is doubly so at night time. Apart from the tower, which is a safe zone available from the start, other safe zones need to be cleared of zombies, powered up and sometimes secured as well, before they can be used.

An activated safe zone will keep the infected out. Some zone will also have other NPCs with side missions or items for sale. There’s also a bag for storing stuff and a bed which can be used to forward time to night or to morning.

When night falls the already bad situation gets worse. The more generic zombie types are joined by the relentless and impossible to beat Volatiles. At night the game becomes less about parkour and more about stealth. If a Volatile spots you it will chase you down until it either loses you or kills you. 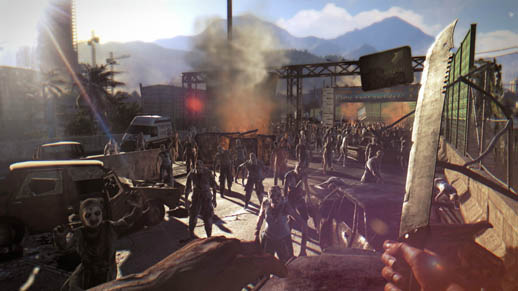 My first moonlit adventure filled me with such pant-wetting terror, the like of which I’ve not experienced since Alien: Isolation’s bloody xenomorph found me holed up in a locker.

But, night-time excursions are also a good way of gaining those all-important skill points.

Not only is the amount of damage you can inflict increased, you also gain experience quicker at night. Survive until morning and you are rewarded with a huge survival point boost. 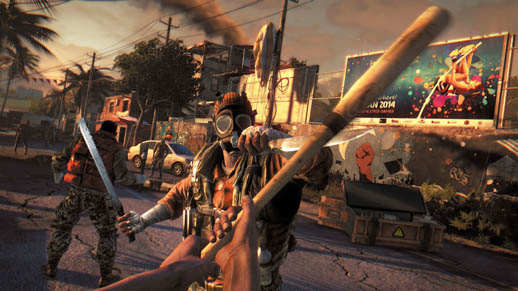 The game can be played co-operatively, in a similar way to Dead Island, either by advertising your game as joinable and having other players drop in, or by joining other players.

Available as DLC and a pre-order incentive, the “Be a Zombie” mode pits a group of players against another player who is… you guessed correctly, a zombie. The lone player is a super-zombie capable of leaping and clawing other players. It’s good fun, offering some Evolve-like action to an already jumbo-sized experience. 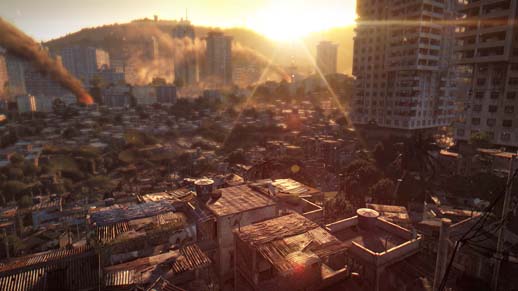 If you’ve got an Android tablet, there’s a Dying Light companion app available from the Google store. It’s a pretty simplistic affair, very similar to what Ubisoft did with Assassin’s Creed. It’s pretty useful as it rewards you with items that can be used in the main game.

So even when you are away from your console or computer you can still progress your game, of a fashion. 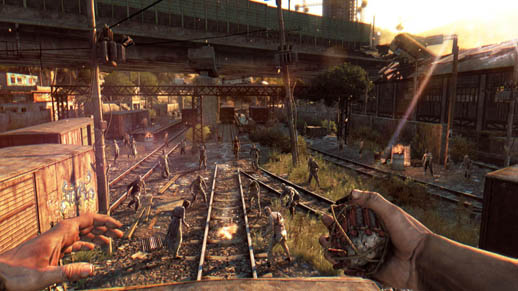 Overall, I was pleasantly surprised with Dying Light.

Techland have crafted the ultimate zombie apocalypse simulator. I’m struggling to find anything that bugged me about the game. It is such a vast improvement over the flawed genius that was Dead Island, it seems that they’ve ironed out all the faults from their previous games and given us a perfectly refined version of their original vision.

I do miss running over zombies from behind the wheel of a truck, but the Parkour is so sublime and the city of Harran so well laid out it’s just a fun place to run around in. The night-time gameplay offers some genuine scares, and even in daylight the game can still catch you out; offering some genuinely pant-wetting gameplay. 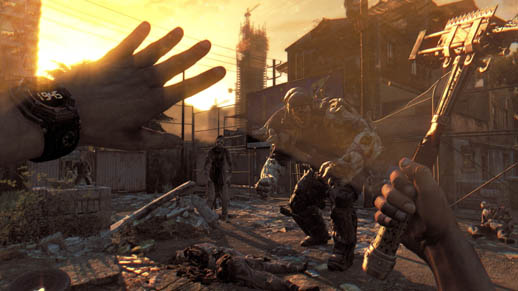 I had such a great time playing Dying Light and I can’t recommend the game enough. Fans of the genre should be falling over themselves to check this game out, as should any gamer that wants to experience a truly inspired zombie apocalypse game.