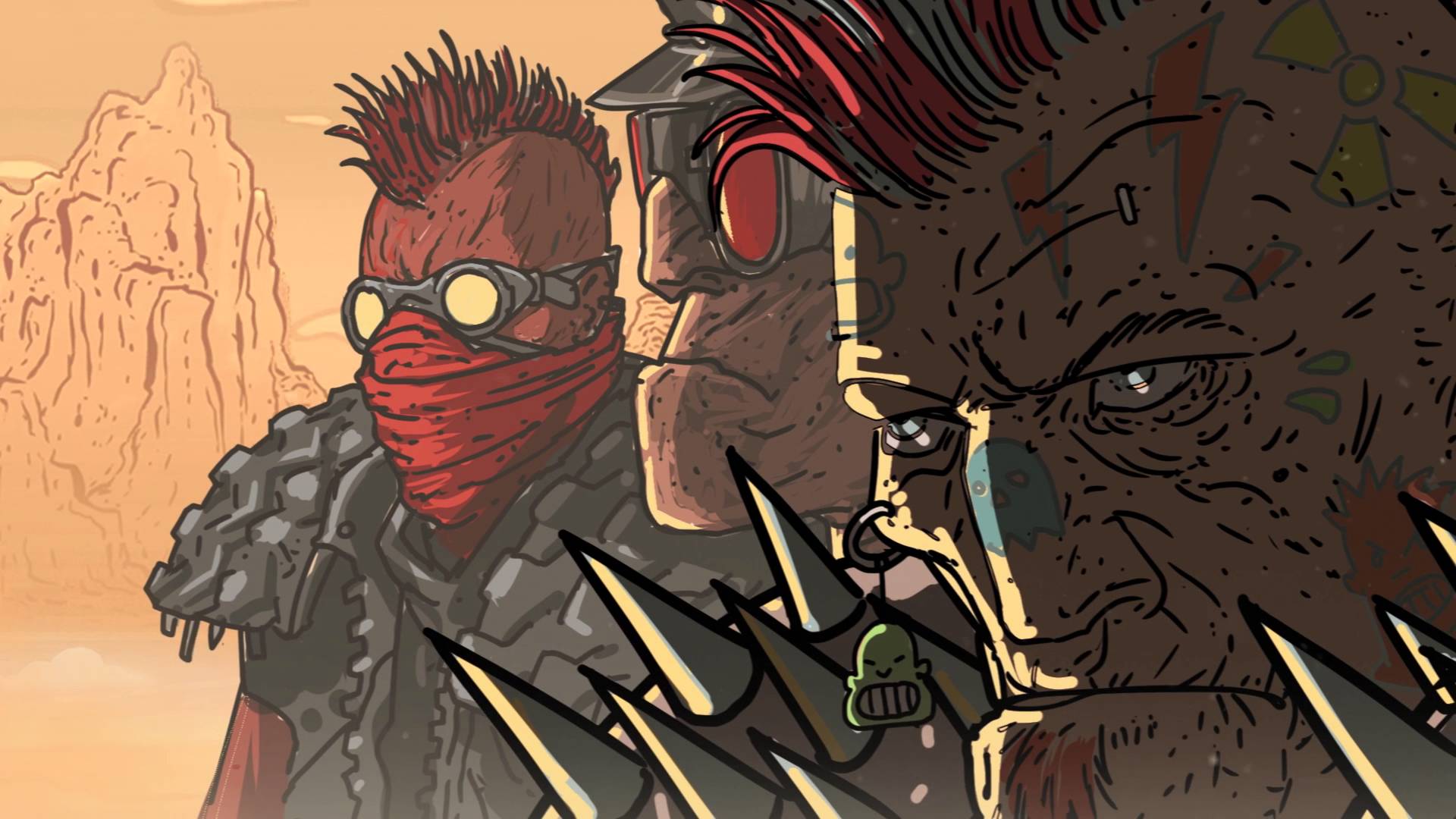 Skyshine’s Bedlam Redux takes us to a post apocalyptic world inhabited by people, monsters and cyborgs where food, oil and other resources are scarce.  It is your job to get your team to the Aztec City and on the way defeat the bad ass Viscera.

Previously Bedlam had been heavily criticised for its turn based combat system in which with only two a side, in a battle where you were outnumbered you could find yourself in unwinnable states. Unfortunately in my opinion this meant there was not enough strategy in this turn based game.  Fortunately Skyshine games has given a crucial update to the game resulting in Skyshine’s Bedlam Redux which has shifted that to two turns per unit.  While this gives the enemy just as many more turns it allows for a little more strategy in the gameplay and drastically decreases the chances of those unwinnable situations. 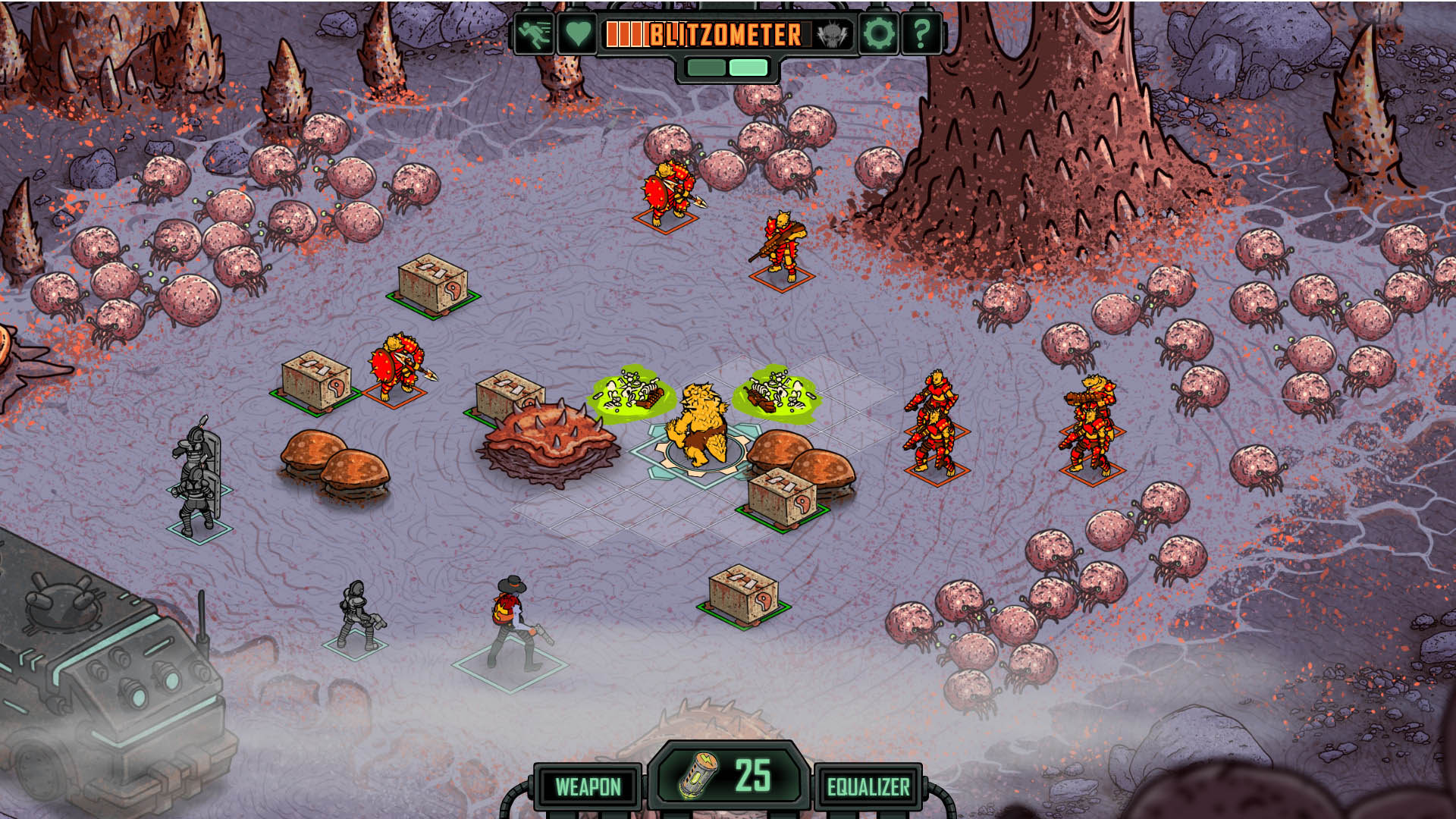 The game has a beautiful hand drawn art style which really shines in the Mad Max like, post apocalyptic setting.  Combine that with the gameplay being a combination of resource management gameplay as you travel and strategy RPG battles.  If this rings a bell it may be because it is very similar to The Banner Saga, which is not surprising as Skyshine’s Bedlam Redux is built on The Banner Saga’s engine.  This is good news to people who did not like the Norse setting of The Banner Saga as it is extremely similar in every other way.

The game has two main modes, a Campaign mode and an Arcade mode.  Campaign mode regularly presents you with different paths on the map and you chose which paths to go.  As the Doser travels to a location you chose you use resources so you need to make sure you pick up as much as you can.  There is animations for the Doser travelling but it is only a few seconds which I thought was refreshing after playing The Banner Saga.  You then get presented with situations where you may encounter characters on the road.  They may be asking for help, need resources or might be quiet.  You then get given options like attack, help or talk to them and through a conversation tree you may then recruit them, gain resources, lose resources or find yourself in a battle. 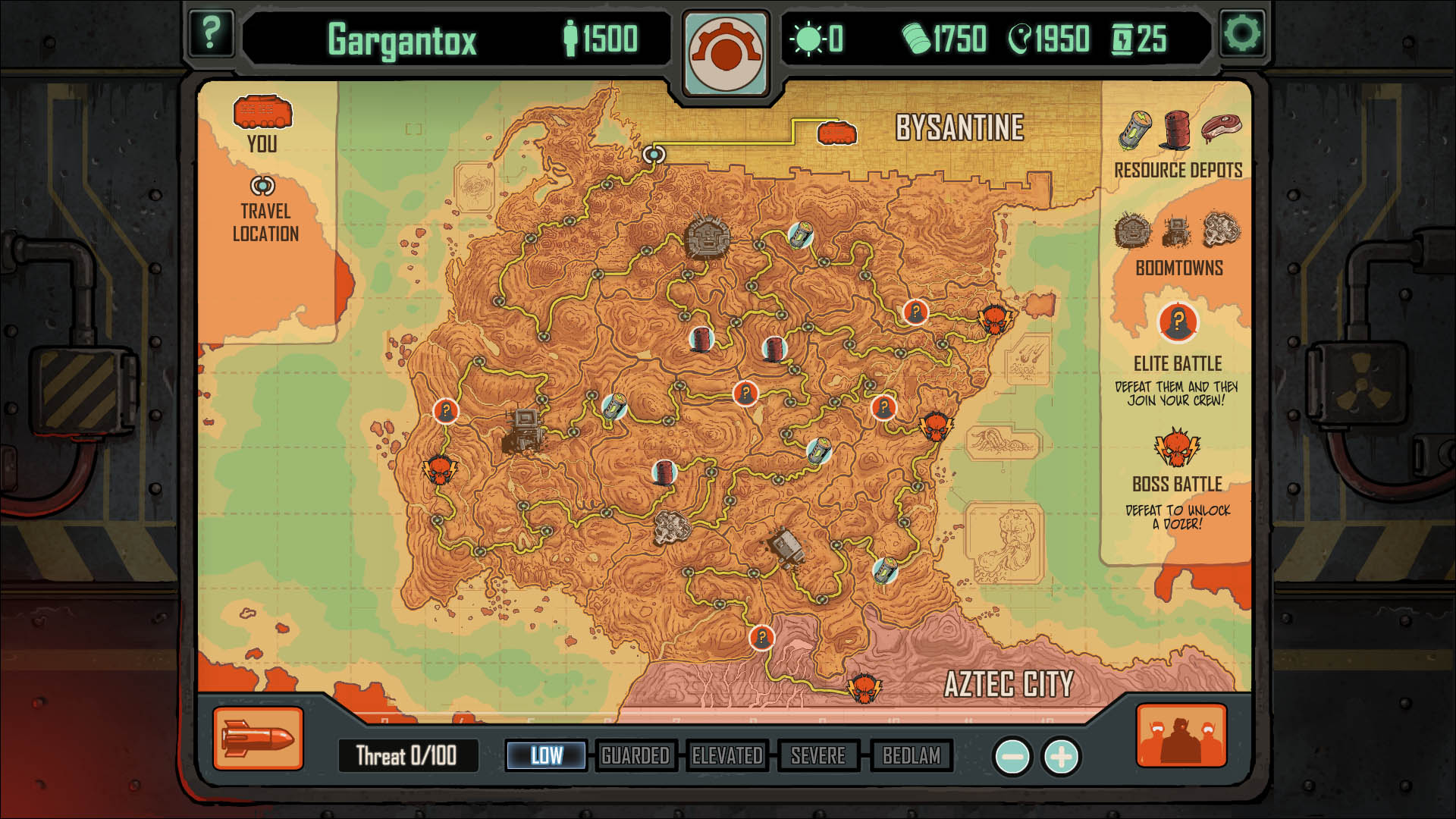 Battles set you on a grid where each unit has two turns.  You can use them both to move around the grid; different units can travel different distances.You use one to move and one to attack when you are within range, or both to attack if you are already within range resulting in more damage.  When your units have finished or when you waive turns then the enemies units all get two turns and this will keep going until the battle is ended.  The result of a battle will be a gain of resources and units lost in battle are lost. Ones injured will have a timer of how many days until they are fully recovered so you can swap them out for the time required.

Arcade mode is similar to the campaign but instead of choosing your path it is a set path, you just have to manage your resources less the Doser, increase your notoriety in wins and eventually beat Viscera.  Resources can also be found on the battlefield which you can pick up on your turn.  It is just different enough to the campaign mode to be worthy of a play.If you want to play the old versions mode it has those options in game outside of battle, but to be honest it is painful especially to the random generation potentially putting you in unwinnable battles, but the devs have left you the option should you chose to.

The battles in Skyshine’s Bedlam Reduxdo get a little repetitive with the odd enemy that is different.  The story is… there I guess, the art style is fantastic and adequately different to The Banner Saga to be unique but with the gameplay being more or less the same, having just played The Banner Saga it got repetitive and a little boring quite quickly.  It does a lot of things OK and a hand full of things well but certainly worthy of a play if The Banner Saga only turn off was the setting.