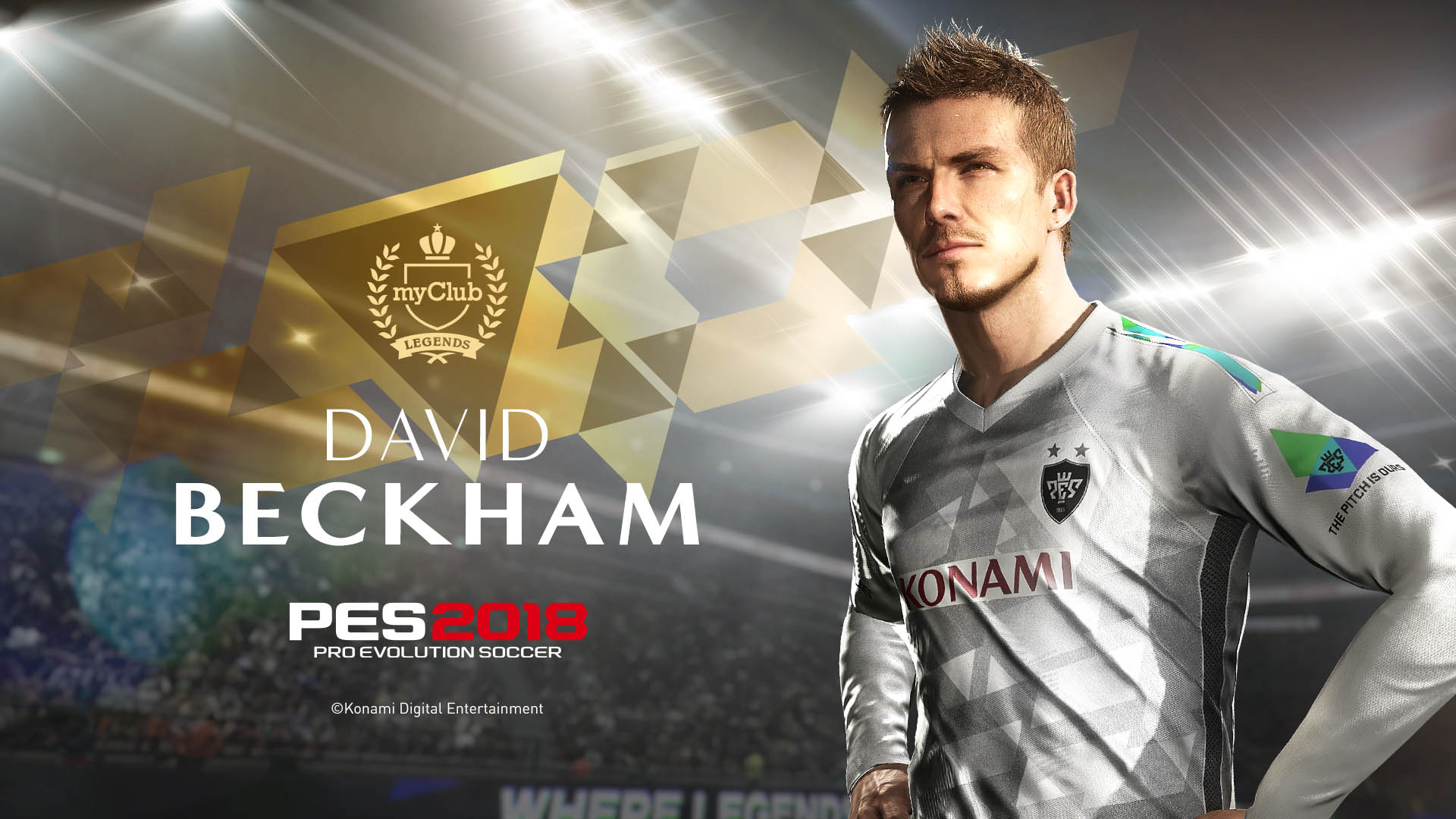 Konami Digital Entertainment has added another legendary player to its enviable PES 2018 roster of Legends with the signing of England midfield genius and global superstar David Beckham.

Arguably the most recognizable football player of modern times, David Beckham’s 20-year career saw him win 19 major trophies as he played for title-winning teams in England, Spain, Italy and the United States of America. He was the first British player to be featured in 100 UEFA Champions League matches, and enjoyed an international career that garnered 115 England caps. His incredible ability from dead-ball and set-piece situations resulted in dozens of truly memorable goals before his retirement in 2013.

KONAMI is delighted that such a leading light of world football has agreed to join PES.  The Leyton-born star will see his incredible career recreated in-game as a Legend in the forthcoming PES 2018. 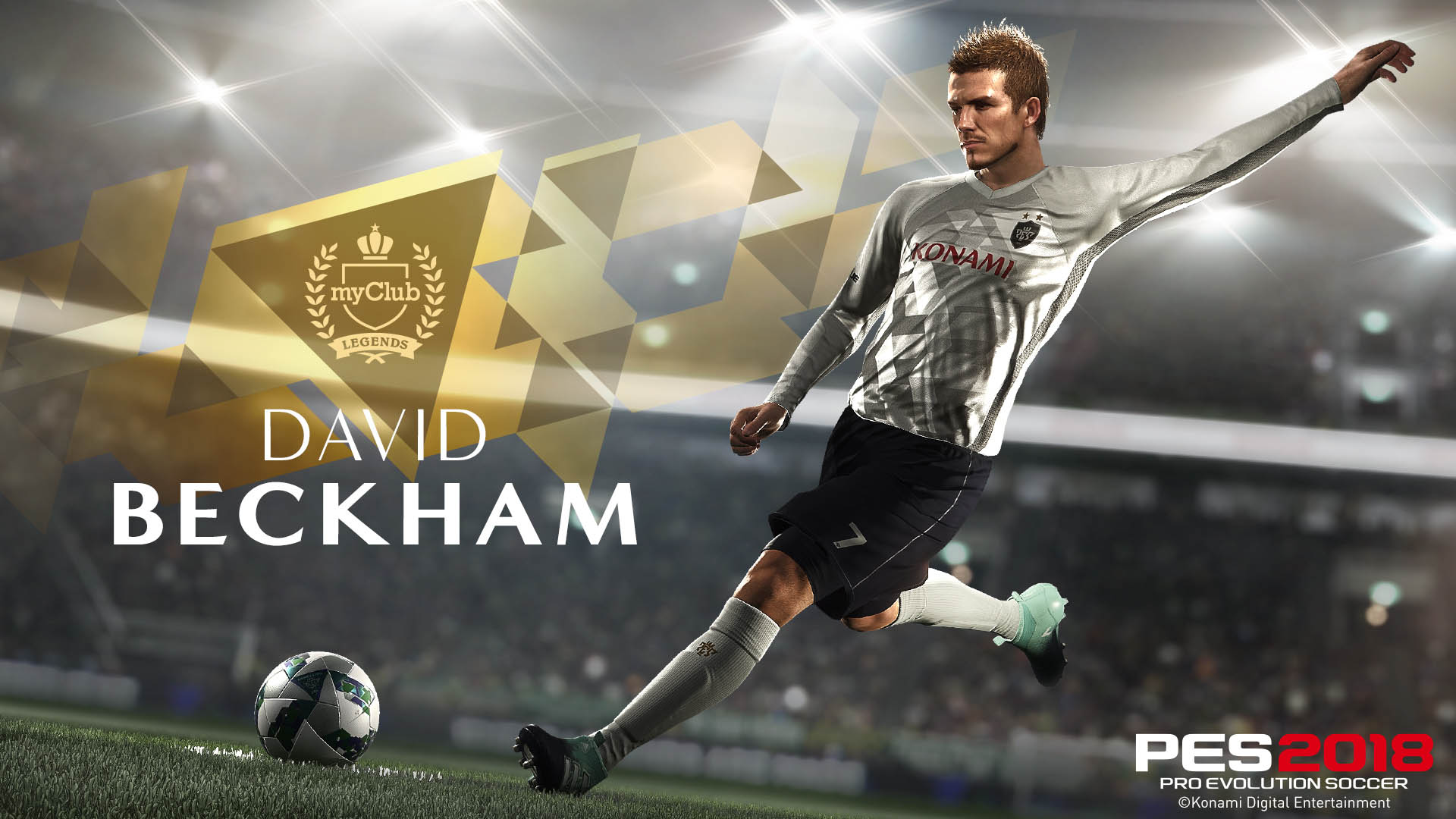 “It’s a great honour to join the roster of legends that work with KONAMI as PES Ambassadors,” offered David Beckham. “I look forward to seeing my career represented in this fantastic game, and working with such a talented team of people who obviously love football as much as I do.”

Following PES 2018‘s launch on September 14th, 2017, several versions of David Beckham from key points of his illustrious career will be featured in the game’s myClub mode across different campaigns. A total of five eras will be represented, from his formative years in England, through to his times in Spain, Italy and the United States of America, alongside one representing his International profile. Using KONAMI’s proprietary scanning and animation systems, Beckham’s unique playing style and abilities will be faithfully recreated for those playing the hugely popular myClub mode.

The addition of David Beckham to PES 2018 perfectly reflects the new game’s message that it is “Where Legends are Made.” Fans will be able to experience this directly in myClub as they build a team from scratch and draft Legends such as Diego Maradona, and now David Beckham, into their team. Additionally, making his debut as an in-game player, the world’s fastest man and most recognisable athlete in the world, Usain Bolt, will be also available within the myClub mode as an exclusive pre-order bonus.

“David Beckham is rightfully a legend within the game, and we are delighted to welcome him to the PES family,” commented Jonas Lygaard, Senior Director Brand & Business Development at Konami Digital Entertainment B.V. “His fantastic career and all he has achieved will be faithfully recreated for those playing PES 2018, and we look forward to working with him as we unite to promote PES 2018 as the definitive football title.”

PES 2018 boasts more new features and enhancements than any PES title in the last 10 years, with more new ways to play and no part left untouched. The series’ famed gameplay offers total control over the on-field action, as users guide players that behave, move and react just like their real-life counterparts. New additions to the control systems add more fluidity to the game, while a new user interface makes accessing the many facets of the game a simpler process. KONAMI has also confirmed that the PC edition of the game will enjoy total parity with that of the leading console iterations.

The new game also introduces more ways for fans to play. Full 11-Vs-11 online options are joined by co-operative 2-Vs-2 and 3-Vs-3 modes with support for local guests. The much-requested ‘Random Selection’ match returns with all new content, while the Master League implements pre-season tournaments, a new transfer system and pre-match interviews and an insight to the changing rooms. Similarly, ahead of next season’s eSport tournament, the official PES LEAGUE has been integrated into the main game.

PES 2018 will be released on PlayStation 4 and Xbox One. The game will also be available via Steam in a version that has undergone substantial improvements in terms of aesthetics and content, ensuring the game enjoys parity with the current gen formats. PES LEAGUE will also be included in PES 2018 in order to support the growing eSport culture.