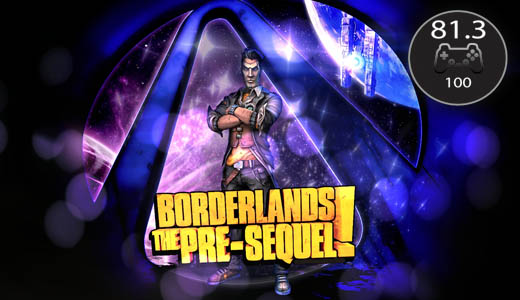 The long-standing cell shaded half FPS, half RPG Borderlands franchise is back with another shot of madness that will no doubt cause a relapse in your loot addiction.

Borderlands: The Pre-Sequel is set between the first and second games, and follows the journey of a new set of adventurous vault hunters and the events that lead to the rise of Borderlands 2’s chief villain, Handsome Jack. The setting this time is Elpis, the moon of the planet Pandora that served as the location for the previous games. 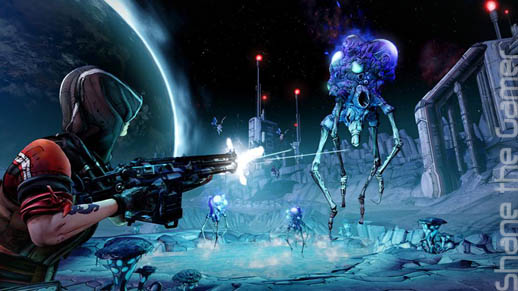 Jumping into the game feels immediately familiar, since The Pre-Sequel makes few changes to the formula established and refined in the previous two games. The loot system, the majority of the weapons and the engine are essentially unchanged. This is not necessarily a bad thing, as Borderlands 2 was itself a fantastic game.

However it contributes to a feeling that The Pre-Sequel is more of a standalone expansion than a game in its own right. 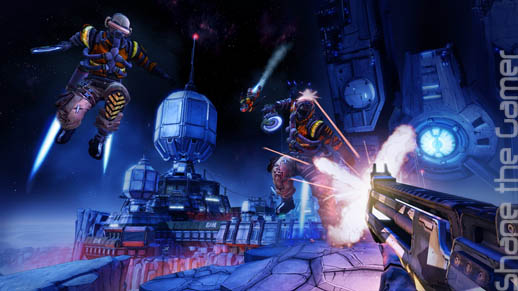 There are some notable new additions, though.

New developers 2K Australia chose to use the lunar setting to introduce a unique new gameplay mechanic centred around your oxygen supply. Walking outside triggers your oxygen helmet to materialise, allowing you to breathe.

However, your pack only has a limited supply and needs to be refilled periodically by moving indoors, activating an oxygen field machine, stepping over a natural oxygen vent, or from one of the many O2 refill packs that are dropped by enemies. 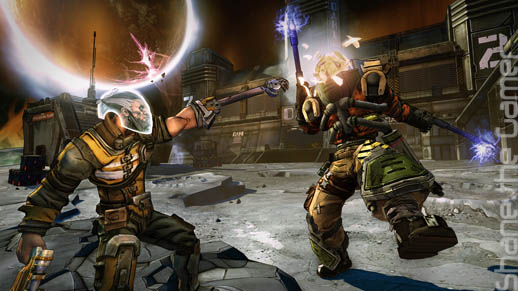 Overall the addition of a limited oxygen supply adds very little. You are unlikely to run out during a battle due to the number of refill packs that you will scoop up as you walk near the bodies of your victims.

It is only the sections between battles that may cause trouble; when you are in your inventory screen deciding on a load-out, or simply traveling across the map. It then becomes annoying, forcing you to go out of your way to refill. 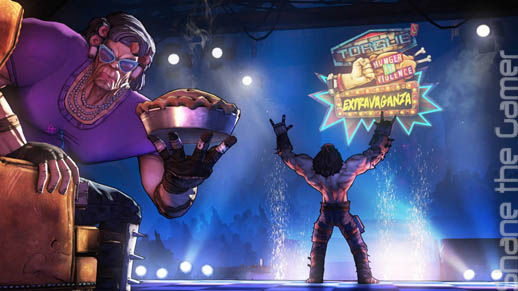 But with the addition of an oxygen pack comes the ability to change course in the air by boosting or slamming.

The low gravity environment means that you get a considerable amount of hang-time after jumping, so these abilities are extremely useful.

Slamming is both a means of quickly reaching the ground and a potent area of effect attack, while boosting is essentially the same as a double jump that allows you to add a burst of speed in one direction. 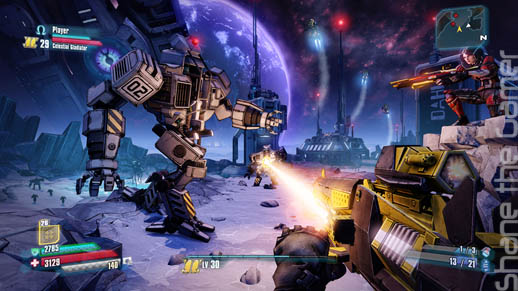 These are both excellent and very smart additions to the game, and changed the way that I navigated the battlefield after I got used to it. Very soon I found my favourite combination of double jumping towards a group of enemies, headshotting as many as possible while airborne, then slamming down in the middle of them to take out the survivors.

The low gravity on Elpis makes The Pre-Sequel feel much more mobile than its predecessors. Structures that would have been barriers on Pandora are suddenly little more than hurdles for you to leap over as you traverse the map.

The Level design often takes advantage of this, with many sections involving scaling buildings or jumping over huge canyons. 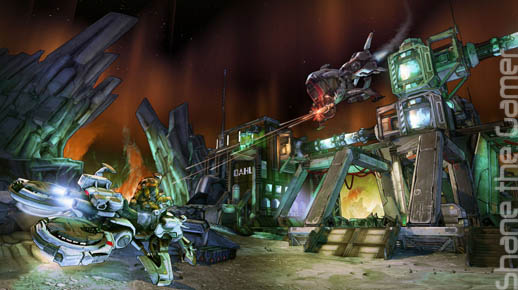 There are a few other small changes that make minor improvements.

The damage amplifying “slag” element that seemed almost overpowered in Borderlands 2 has been replaced by a new “cryo” element that freezes enemies, balancing the game somewhat. And the new “grinder” allows you to combine unwanted items into new ones, if you know the right recipes. 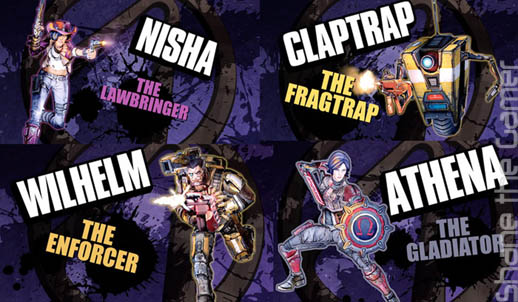 The new class of laser weapons are also a fun new addition.

The variety that fire a continuous stream of damage at a target do seem a bit overpowered though, and I came to rely on them heavily once I tried one. One unique weapon I got as a quest reward lasted me for the entire last third of game, and was still powerful enough to take down the final boss and solo the first two raid bosses with no trouble at all. 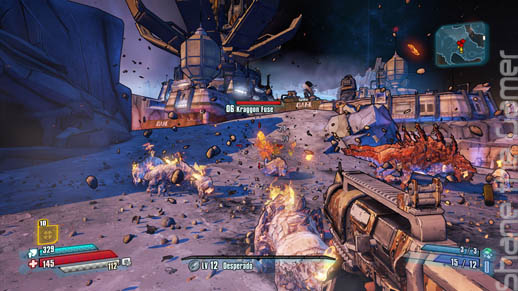 Overall, the success of the Borderlands games has hinged on two key elements.

First, the loot system, which is just as fun as ever here. It is supremely satisfying to see rare items fling out of an enemy after you kill them, and the developers are keenly aware of this.

Weapons, items, ammo and money are extremely common, with powerful rare drops given are just frequent enough to keep you on the edge of your seat but not often enough that seeing them loses its novelty. It’s no wonder that so many people complained about Destiny, when Borderlands spoils us so much. 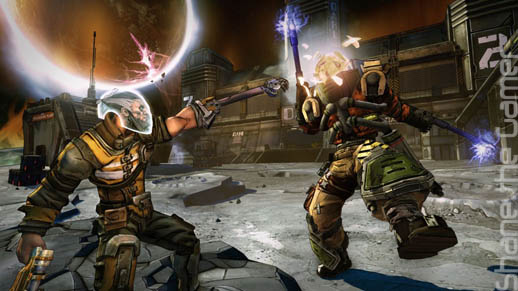 The other pillar of the Borderlands franchise is that it doesn’t take itself too seriously. The core of most missions are about as boring and unimaginative as they come, with fetch quests, gather missions and wave defences making up the majority of the gameplay.

However, the previous games have been fantastic at disguising this fact through the use of humour and a playful tone. In this department, the Pre-Sequel is not as successful as its predecessors. Many of the quests are much more serious, allowing focus to shift to what you are doing rather than the more exciting story behind why you are doing it. 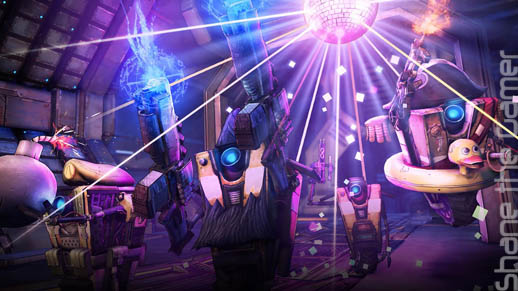 The first half of the game in particular is sluggish, with lots of huge, sparse landscapes to cross on foot and with fast travel stations few and far between. But thankfully the game improves in the latter half.

Very few new characters are as memorable or funny as those in previous games. Once again, the first part of the game is the main offender here, as many of the figures from Pandora we came to love are replaced by their less engaging Elpis counterparts. Thankfully, the writing kicks up a gear towards the end. 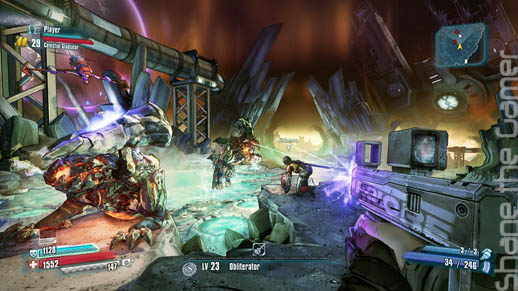 With a new game comes a new slew of playable characters with their own unique powers. The big selling point this time is the option of a playable claptrap character, one of the simultaneously lovable and annoying robots that were a huge fan favourite in the previous games.

Playing as him is worth it just to hear the other characters reactions when they find out that you’re a claptrap. 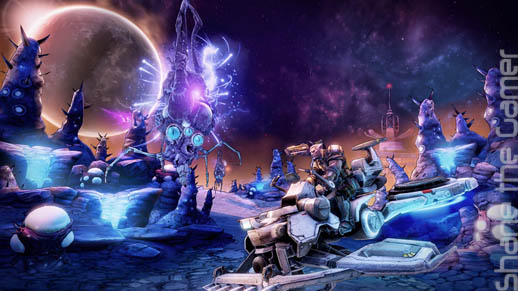 My biggest complaint about The Pre-Sequel, is how Australian it is.

I’m fairly sure that this is just my Australian “cultural cringe” kicking in here, and that international audiences may find it funny and that it adds to a sense of character.

But I often find it jarring to hear a familiar accent among a group of the usual British and Americans in games and movies. In this case, the majority of the new characters have Australian accents, and many of them intentionally lay it on really thick. 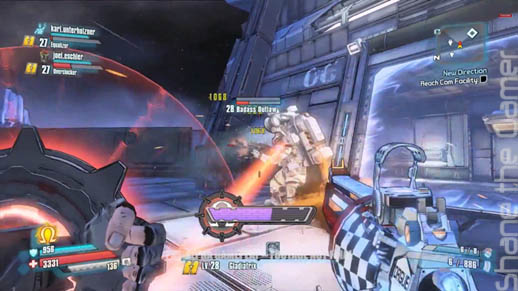 Combine that with a considerable amount of slang and references to Australian culture spread throughout the game, from Ned Kelly to “Waltzing Matilda”, and I can’t help but feel that it plays like a promotional tool that is trying to make fun of itself at the same time. That’s a recipe that makes me a bit uncomfortable.

If all of these complaints seem a little petty, it’s because there’s nothing really bad about Borderlands: The Pre-Sequel. The gameplay is fantastic, much of it is hilarious, and the art style has a lot of personality.

All in all it’s a solid game, and well worth your time to play. But there are lots of little reasons why it doesn’t quite hit the high notes that Borderlands 2 did, and overall is not as much fun. 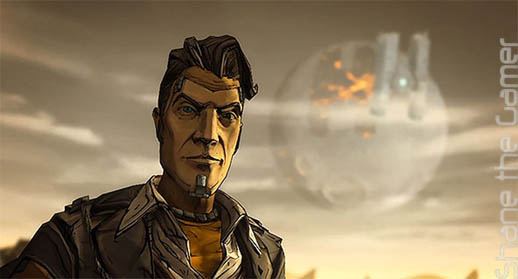 There’s a problem with working with an established franchise, in that an otherwise great game can be considered bad purely by comparison with previous instalments. Borderlands: The Pre-Sequel has a particularly hard act to follow, and its missteps are all the more evident given that we have Borderlands 2 to compare it to.

If you haven’t played a Borderlands game before I recommend starting there, but if you’re a seasoned vault hunter looking for a new challenge, then The Pre-Sequel should definitely be on your radar.