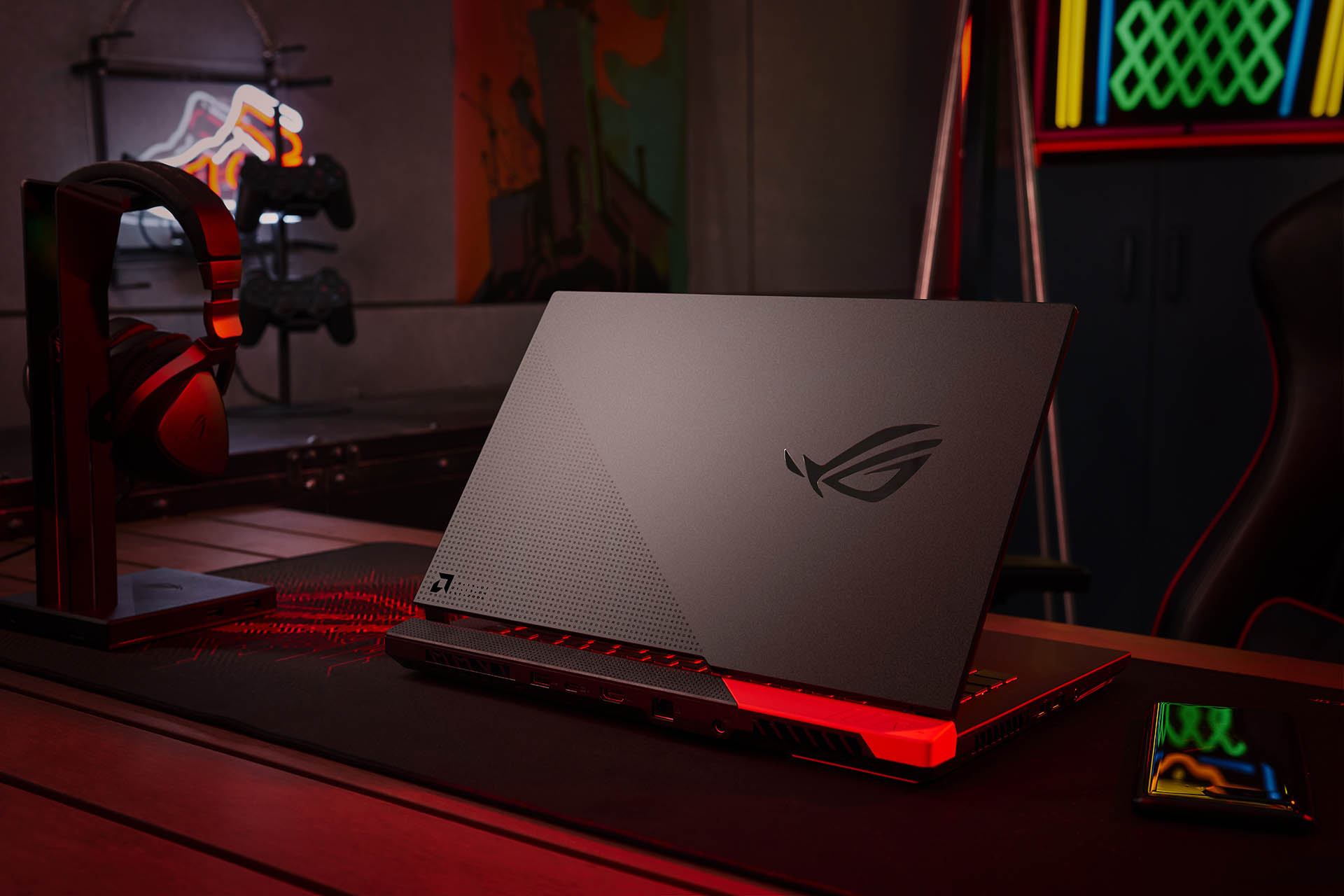 A world’s first with new Radeon RX 6800M GPUs, paired with Ryzen 9 5900HX CPUs. Both laptops bristle with features carefully chosen to unleash the potent performance potential of these components.

ROG Intelligent Cooling pushes the performance of ROG Strix G Advantage Edition laptops to the next level, utilising cutting-edge techniques to give gamers the sustained power needed to play longer and multitask more. Advantage Edition laptops use liquid metal thermal compound on not only the CPU, but also the GPU. To further accelerate heat dissipation, ROG engineers developed a highly efficient vapor chamber that fully covers critical components, including the muscular 16-phase VRM. 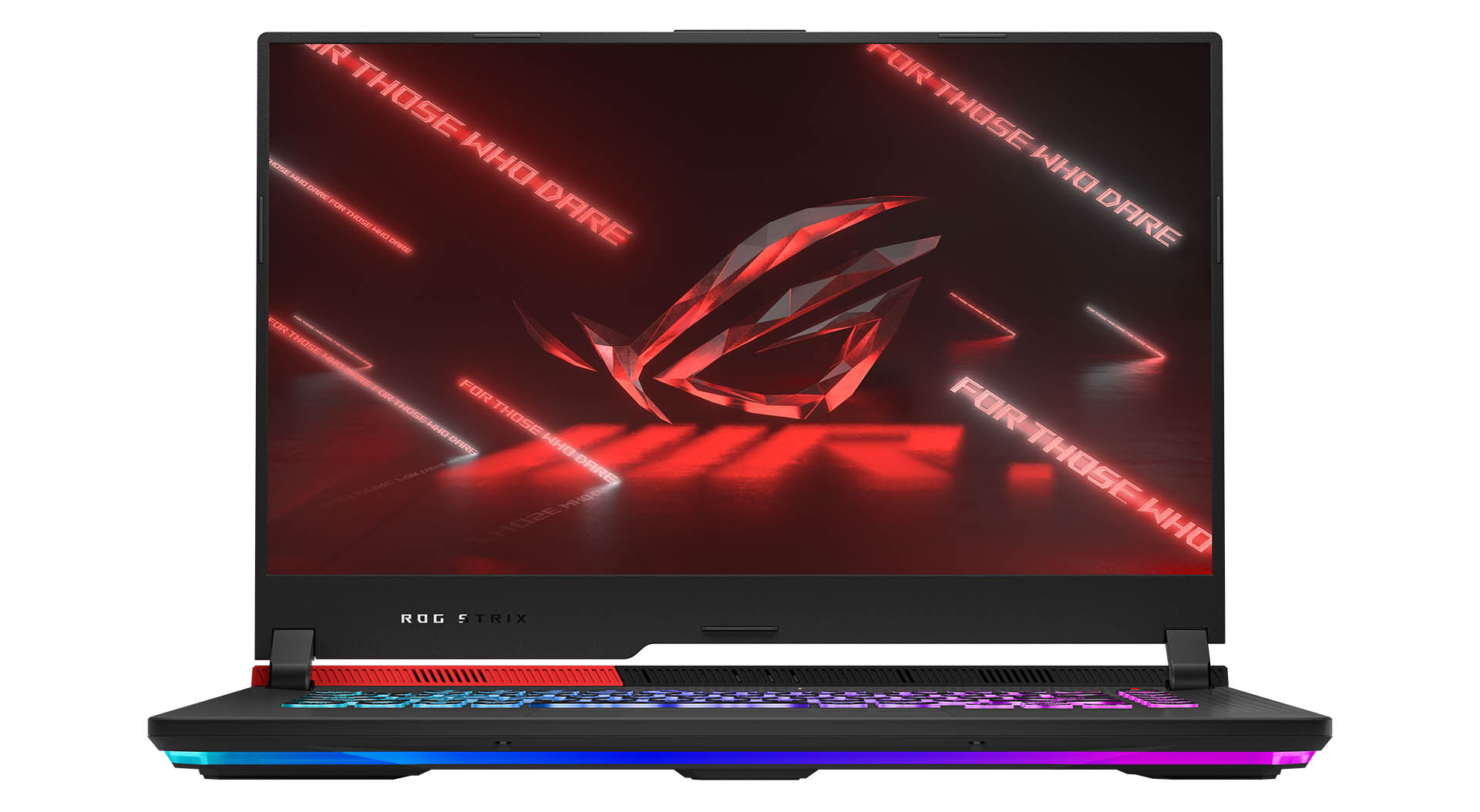 Wrapped in a sporty chassis inspired by athletic gear, the Strix G Advantage Edition is designed to impress in every gaming arena. The unique aesthetic includes subtle references to the AMD DNA, along with Customisable Armor Caps and Aura Sync lighting that let you fully personalise the looks. With leaps in substance and style, everyday players can get more out of the game, and serious competitors can get the edge they need to thrive.

Ever since the creation of the first ROG product, the original Crosshair motherboard, ASUS has collaborated closely with AMD to empower every gamer.

Strix G15 and G17 Advantage Edition gaming laptops take that partnership to new heights. By doubling up on AMD components with high-end Ryzen and Radeon processors, they blitz through competitive play, streaming, entertaining, and everything in between. 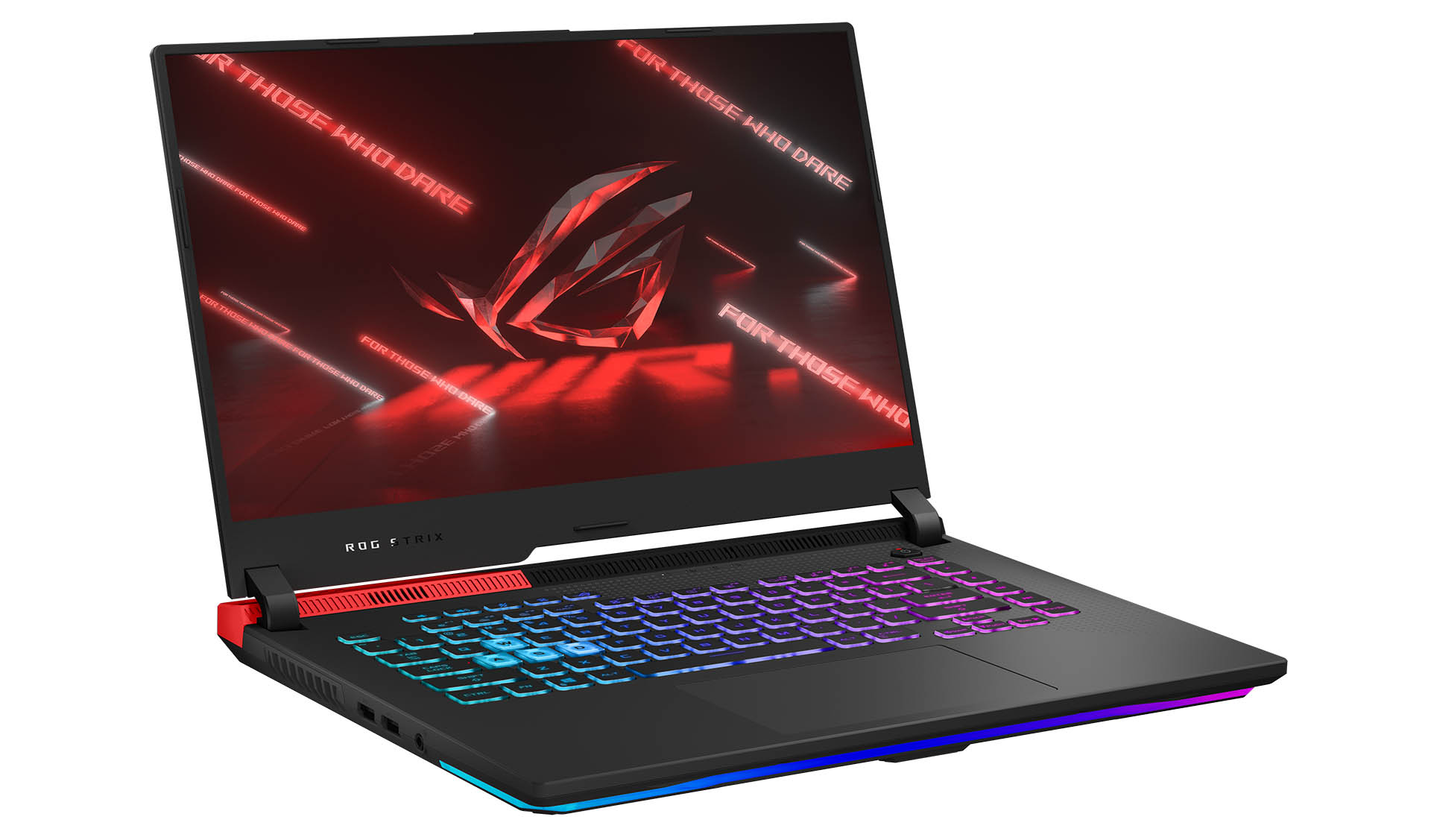 Strix G Advantage Edition gaming laptops are the first to use the flagship chip from the Radeon RX 6000 Mobile Series. These new graphics processors bring next-generation performance and power efficiency to gaming laptops. They’re built on an AMD RDNA 2 architecture that combines ray tracing, computational, and traditional effects to enable more lifelike visuals and deeper immersion. The Radeon RX 6800M has ample power for silky-smooth graphics in a wide variety of games.

Thanks to exclusive ROG cooling upgrades and clever AMD SmartShift technology, the Strix G Advantage Edition can sustain GPU clock speeds up to an impressive 2300MHz.

Play harder and work faster with the Ryzen 9 5900HX processor.

Part of the latest Ryzen 5000 Series, this powerful CPU is manufactured with cutting-edge 7nm technology and designed from the ground up to deliver the most immersive gaming experience possible in a laptop. It flexes 8 cores and 16 threads to speed through heavy multitasking and multithreaded workloads.

Advanced cooling helps the CPU run on up to 90W of sustained power on its own, and you can push the power limit even with the ROG Armoury Crate utility.

AMD-exclusive SmartShift and Smart Access Memory technologies provide a distinct advantage by allowing the CPU and GPU to work more closely together.

SmartShift amps up performance on the fly by dynamically shifting power between the CPU and GPU depending on the demands of the workload. Whether you’re pushing high frame rates in the latest games, rendering complex 3D objects, or editing cinematic videos, it constantly optimises to ensure power is available where it’s needed the most. The hardware boosting interface and machine learning algorithms behind this technology can improve performance by up to 15%. 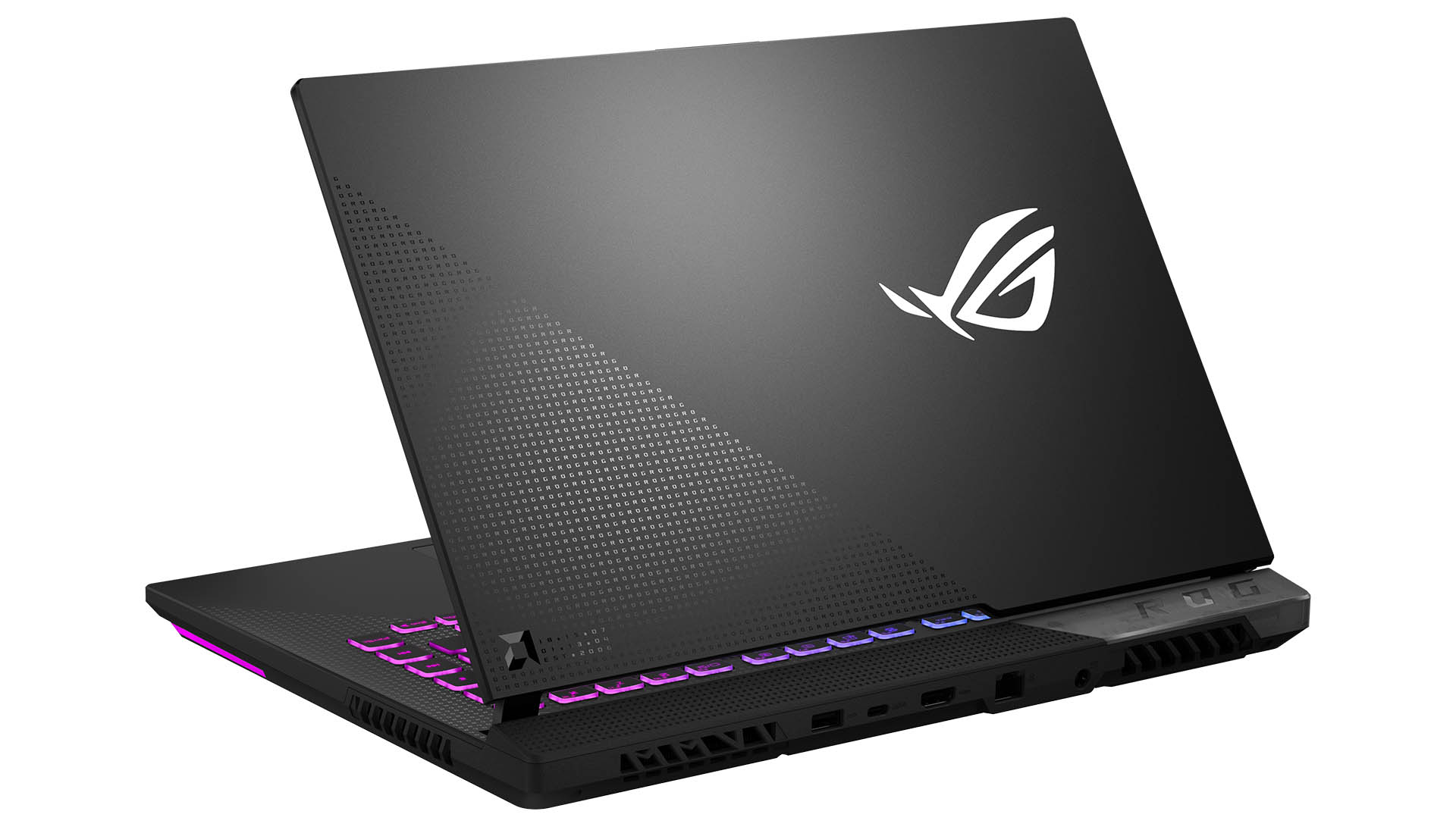 Smart Access Memory pumps up performance in many gaming scenarios by improving data transfer between the GPU and CPU.

Support your multitasking habit by pairing the Ryzen 9 5900HX CPU with up to 32GB of high-performance DDR4-3200 RAM.

Do more in the moment, fill your games library, and save your best plays on up to 1TB of superfast NVMe SSD storage that loads everything at warp speed. The Strix G Advantage Edition also comes with an additional M.2 slot that makes it easy to upgrade your experience with terabytes of extra space.

In addition to enabling high clock speeds right out of the box, our sophisticated design has enough thermal headroom to go beyond. The Turbo Operating Mode increases the GPU wattage above stock, and you can push even more power through the processors using the Manual mode in Armoury Crate.

The cooling upgrades in the Strix G Advantage Edition gaming laptops start with exotic liquid metal thermal compounds on both processors, improving heat transfer and lowering temperatures by as much as 14°C.

The right amount must be applied meticulously for the best results, so ASUS developed a patented process that works at scale. This patented process makes the Strix G15 and G17 Advantage Edition the first mass-produced laptops with liquid metal on both processors. 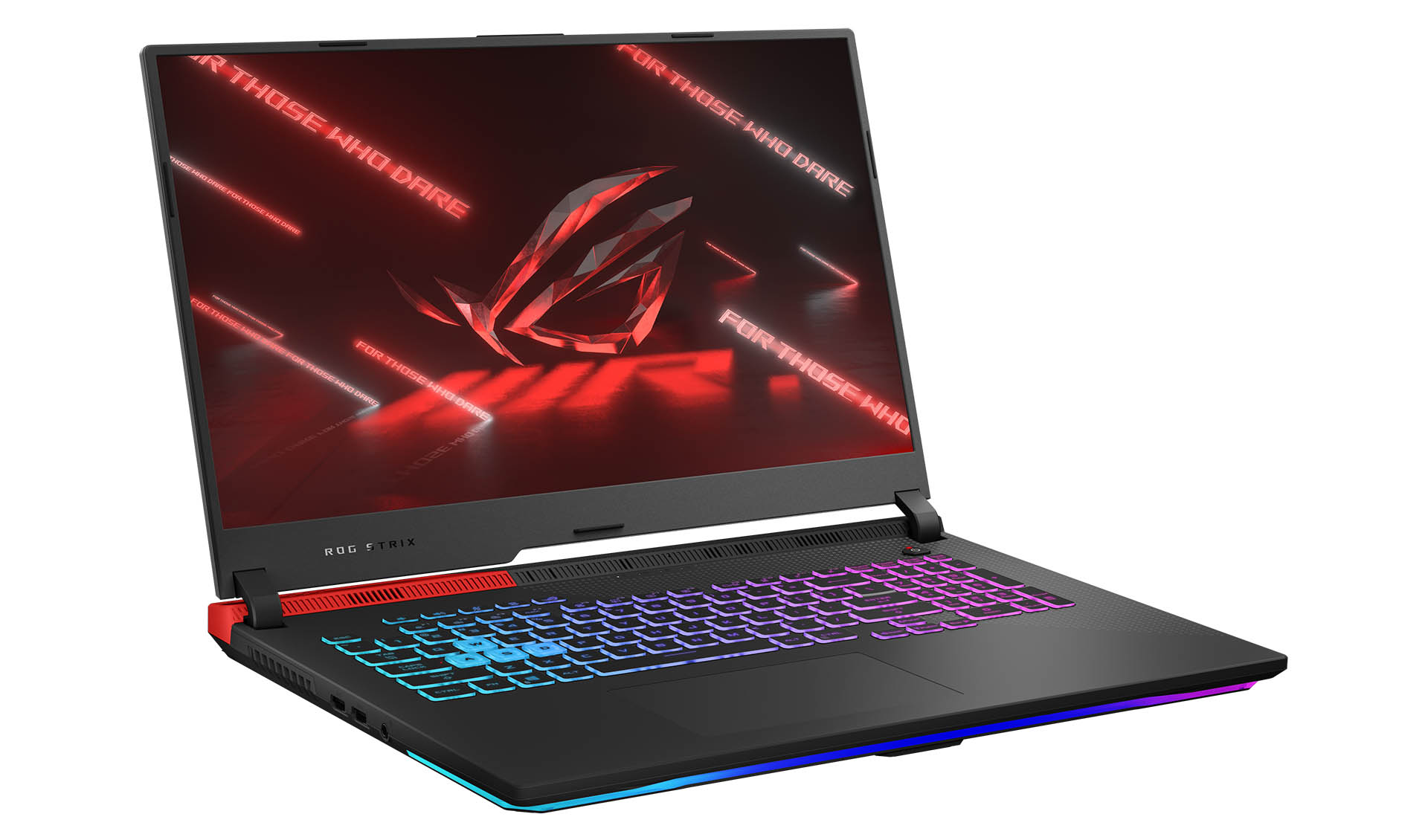 Thermal efficiency is further improved by a massive vapor chamber that covers the CPU, GPU, VRAM, and voltage regulation circuitry. Artfully laser-engraved to highlight the hardware underneath, this cooling feature was designed specifically for the Advantage Edition.

Compared to conventional heat pipes that only transfer thermal energy along their axis, vapor chambers spread it across their entire area, which improves dissipation in small spaces. The comprehensive coverage and huge footprint maximise redistribution to the heatsinks, raising the thermal headroom by 25W compared to the standard Strix thermal module.

The Strix G Advantage Edition also adopts the latest Intelligent Cooling features found on other 2021 ROG gaming laptops. Like the rest of the Strix series, it radiates heat from four heatsinks and fan outlets in the flanks. Two Arc Flow fans improve airflow by up to 17% for the CPU and 20% for the GPU with no increase in noise.

Each fan spins 84 blades capped by special tips that follow an aerodynamic wave pattern that reduces turbulence. The blades each taper down to just 0.1mm at the base to move more air, and they’re made of a liquid-crystal polymer strong enough to maintain its structure at high speeds. 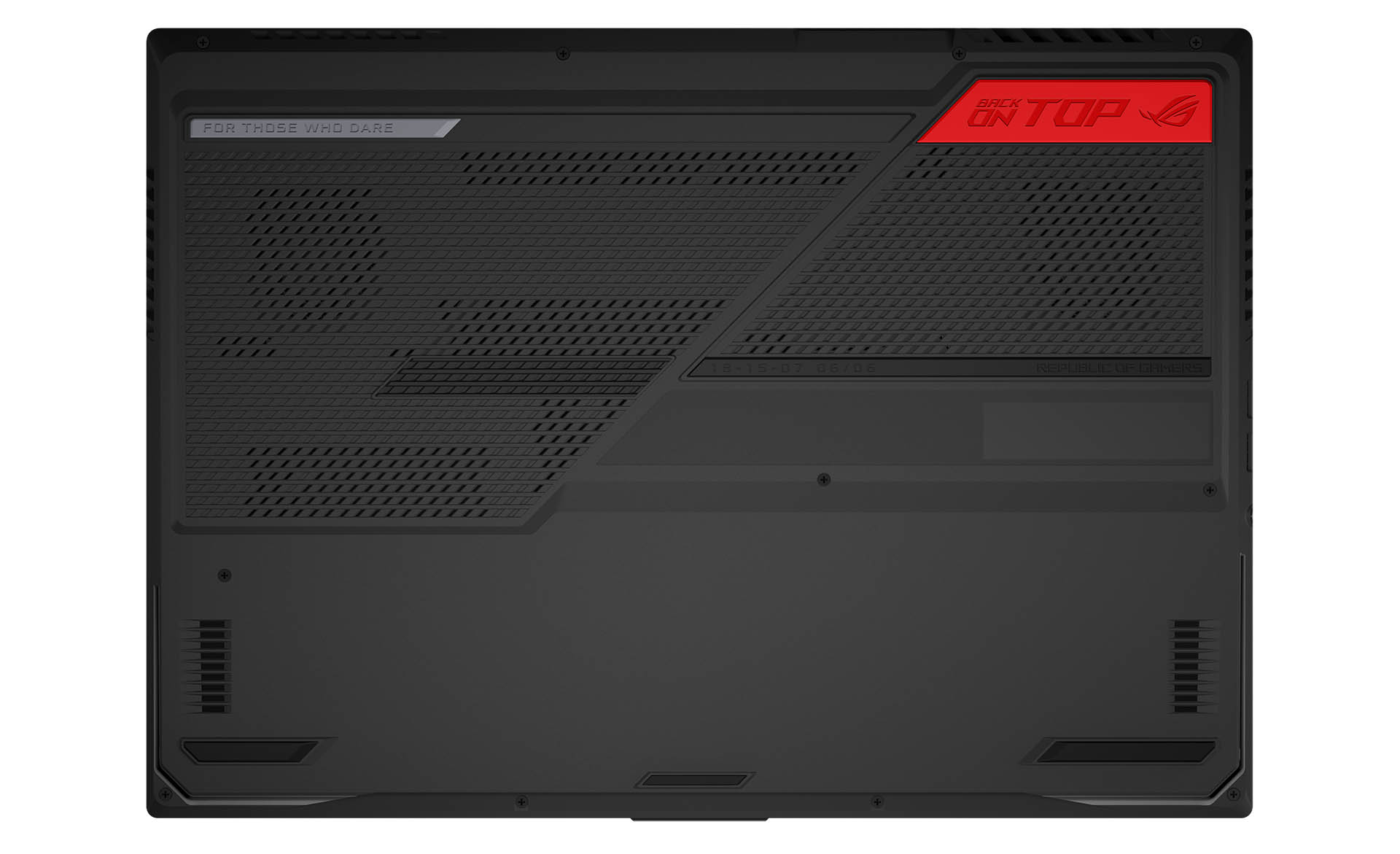 Advanced cooling technology extends to the keyboard, which takes player comfort into careful account. Many laptops can become uncomfortably warm to the touch during prolonged play, so ASUS created a CoolZone design that strategically places vents under the keyboard to reduce surface temperatures. In the Advantage Edition, it’s paired with a new IR sensor that monitors those temperatures in real time, allowing the system to make adjustments to keep the keys below 40°C. 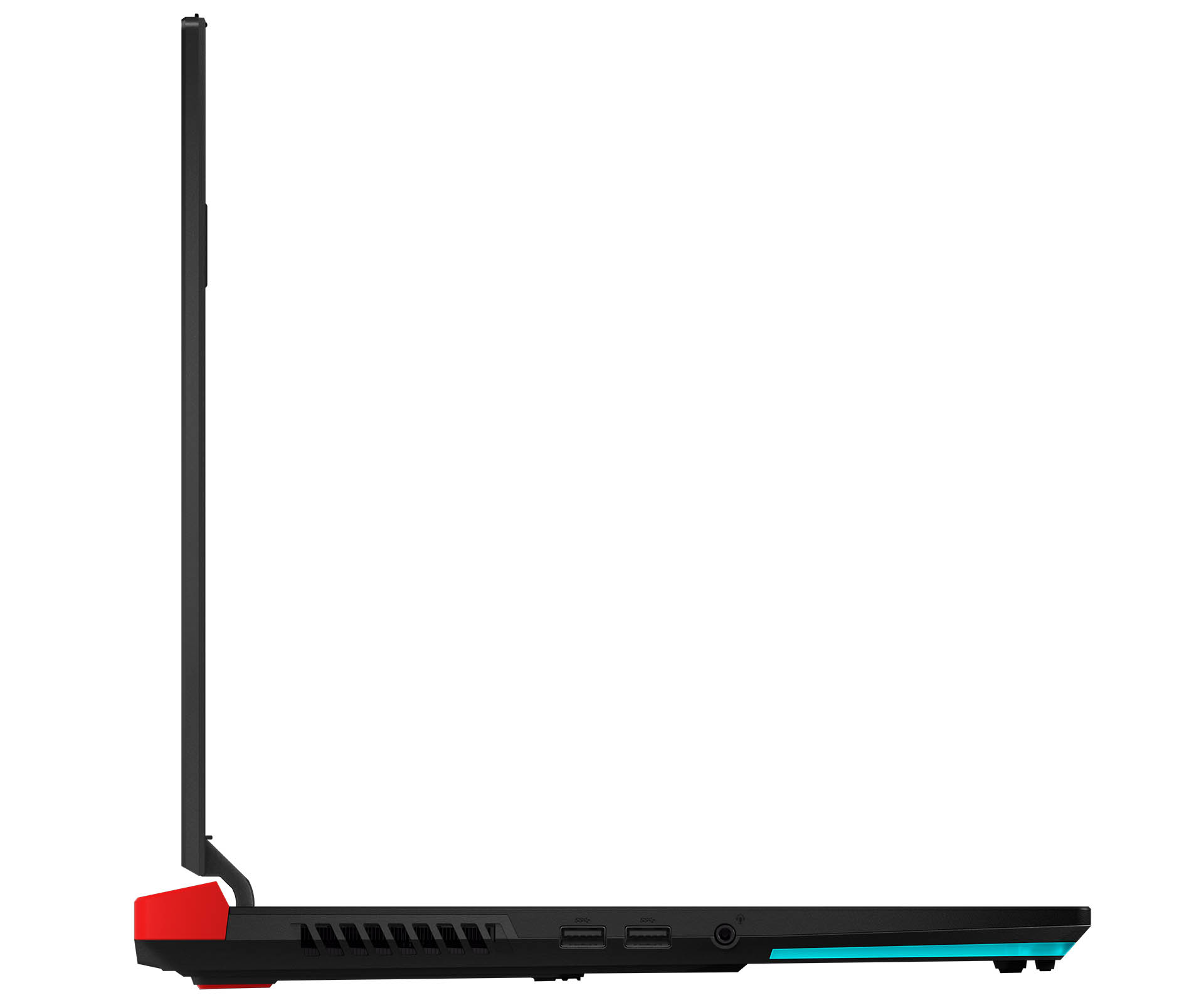 Strix G Advantage Edition laptops let you define your next-gen visual experience with a choice of two exceptional displays framed by super-narrow bezels, both available in 15-inch and 17-inch sizes.

Tournament-level refresh rates combine with the high-powered Radeon GPU to let players catch every moment of the action and react as fast as their reflexes allow. The 3ms response time makes fast-paced motion super sharp, producing a cleaner view for accurate target tracking.

Gamers who want fluidity with greater detail should look to new options that take WQHD resolutions up to a 165Hz refresh rate with a 3ms response time.

The higher 2560×1440 resolution showcases more of your environment, and the experience is all the more immersive with full coverage of the cinematic DCI-P3 colour gamut.

FreeSync Premium technology completes the AMD experience on all the display options.

They’re tuned with Dolby Atmos technology for a multidimensional soundscape with incredible detail. Atmos can also create compelling virtual 5.1.2-channel surround sound for stereo headsets that puts players in the heart of the action and helps them pinpoint enemy movements with precision.

To make team communication clearer, Two-Way AI Noise Cancelation eliminates up to 95% of background noise from both input and output audio.

Developed using a deep neural network for super-high accuracy, this algorithm can be applied to any mic and configured on a per-app basis, so you can target chat software while preserving in-game sound. The two-way filtering is especially useful, processing output audio to help you hear teammates better. And because noise canceling runs on the CPU, the GPU is free to hit higher FPS.

The Strix G Advantage Editions empower gamers to take on new challenges while staying compact, mobile, and stylish. The laptops pack serious gaming power into portable chassis with footprints up to 7% smaller than the previous generation. Larger 90Wh batteries enable long life on the road with up to 11.4 hours of video playback, while fast charging gets you back to 50% in just 33 minutes.

Support for Type-C charging adds the flexibility to run everyday activities like web browsing and streaming videos off a smaller USB-C adapter up to 100W. You can also charge from USB power packs to break free from wall sockets.

Subtle textural details add new dimensions to our classic Original Black colouring, visually distinguishing the all-AMD editions from other members of the 2021 ROG Strix family. The 360° chassis design has something to see from every angle. 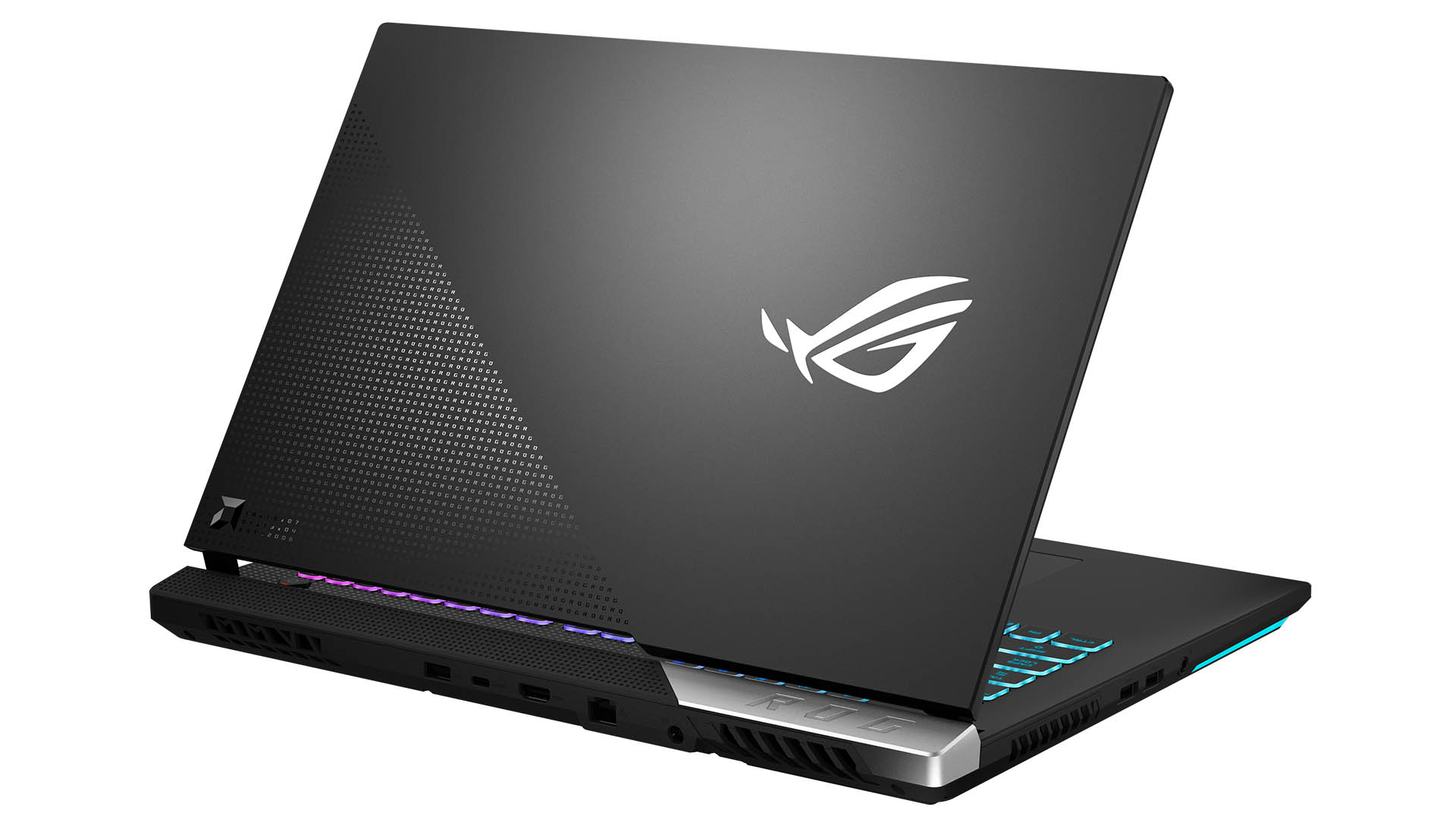 ASUS created a unique design in Challenger Red just for the Advantage Edition. The laptop also comes with two additional styles in the box, and it’s easy to swap them to add a pop of personality or match your mood. For modders or players who think further outside the box, they also provide a template for making 3D-printed Armor Caps in any colour, style, and material you desire.

With Aura Sync lighting, you can take customisation out of the realm of static colours and into a whole new playing field of effects and visualisations.

Tasteful RGB accents shine across the exterior, from the four-zone keyboard to the triple-edged light bar that illuminates your environment. 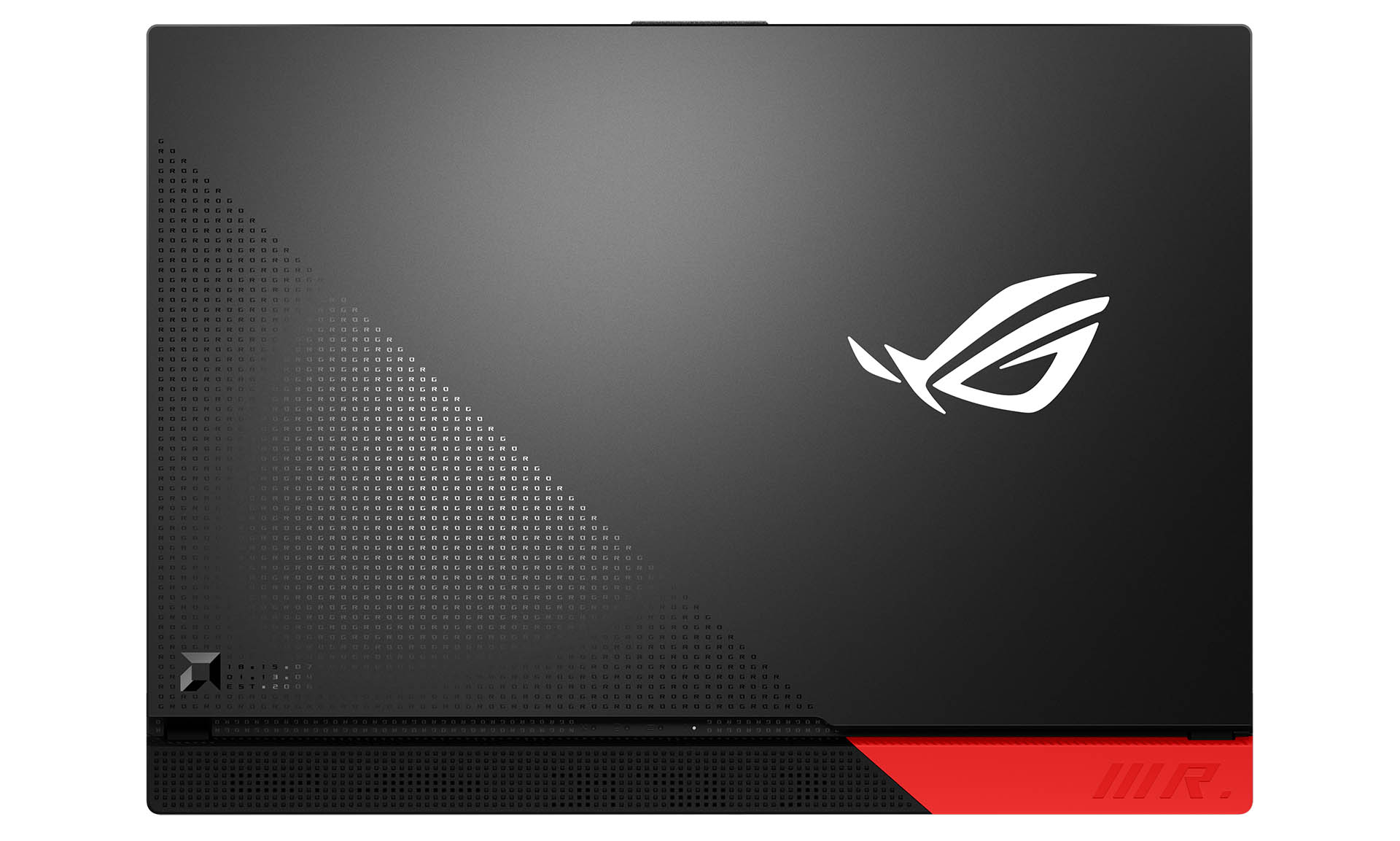 Despite being more compact than ever, these gaming powerhouses have a full assortment of ports strategically placed for a tidy setup. There are enough ports at the back to power a multi-monitor desktop with all the cables neatly out of the way, including the main power jack, HDMI, Gigabit Ethernet, USB Type-A, and DisplayPort-enabled USB Type-C.

Two more USB ports await peripherals on the left side along with an audio jack for your headset, keeping additional cables out of the way of right-handed mousing.

Wi-Fi 6 (802.11ax) networking rounds out the package with support for peak wireless interface bandwidth up to 2.4Gbps on compatible networks, plus smarter traffic management that enables lower latency through higher efficiency.

Wi-Fi coverage is strengthened by ROG RangeBoost technology that enhances reception by evaluating the signal strength of four internal antennas and then picking the best pair to use for your location, minimising dead spots and increasing range by up to 30%.

Release date of the ASUS ROG Strix G15 and G17 Advantage Edition is still be confirmed.