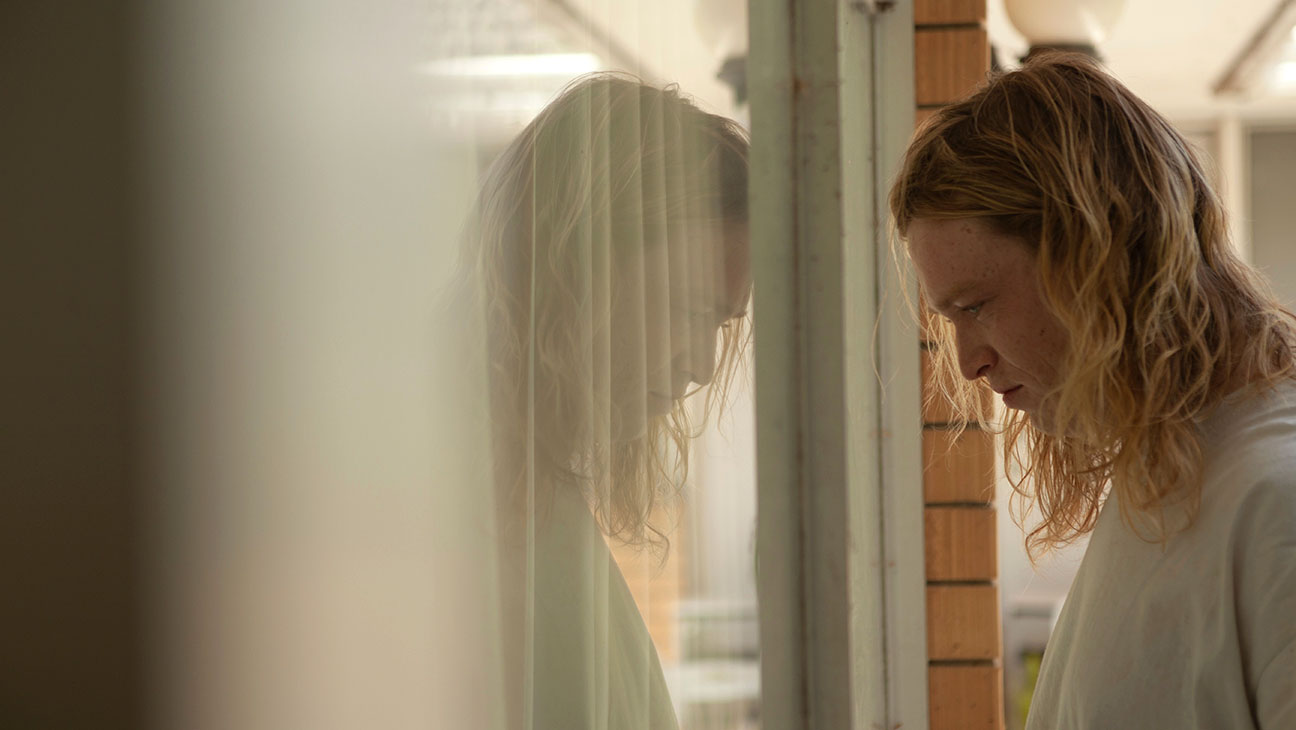 I am a resident of Christchurch, the place in which on 15th March 2019 a terrorist carried out mass shootings on the Al Noor Mosque and the Linwood Islamic Centre, killing 51 people and injuring 40.

So, when it was first publicly announced that Justin Kurzel was making a film about events leading up to the Port Arthur massacre in 1996, I experienced a moment of hesitancy.

I have a deep appreciation for Kurzel’s work, but I did have concerns based on my own experience of being in a city that had experienced something similar to Port Arthur. Snowtown, Kurzel’s brilliant 2011 film about the brutal murders perpetrated in and around Adelaide, was a brutal watch. I wasn’t sure entirely how I would feel about Nitram, but the only way to be sure was to watch it.

Nitram is not primarily about the events of that day. Instead, it is a look into the events that led up to the tragedy. Teaming up again with Snowtown writer Shaun Grant, Nitram is a fascinating character study; a way of trying to make sense of what occurred on 28th April 1996.

The film opens to opening titles, but we hear the voice of a reporter discussing an accident with a young man who needed to have skin grafts after he was burnt. She then turns her attention to another boy who was in hospital after an accident from playing with fireworks.

From black screen titles we are confronted with the face of a blonde 12-year-old, arms behind his head, who was then asked, “don’t you think you’ve learned a lesson from this?”, to which the boy replies, “yeah but I’m still playing with them”. It’s real footage, and you’re confronted with the face of a boy who would grow up to leave a painful scar on modern Tasmanian history.

‘Nitram’ (Caleb Landry-Jones) is the derogatory name the people in his community gave him- it’s the gunman’s name backwards, heavy on the ‘Nit’ syllable (perhaps denoting an allusion to either headlice or them considering him a nitwit, or both). Living with a stoic mother who has to be the stricter of his parents (played brilliantly by Judy Davis), and a more gentle acquiescing father who is plagued by depression (a beautifully nuanced performance by Anthony LaPaglia), Nitram is introduced to us in his twenties as still playing with fireworks, to the frustration of his neighbours and the delight of schoolchildren when he turns up at school at lunchtime to put on an unsolicited show of leaping through fireworks. 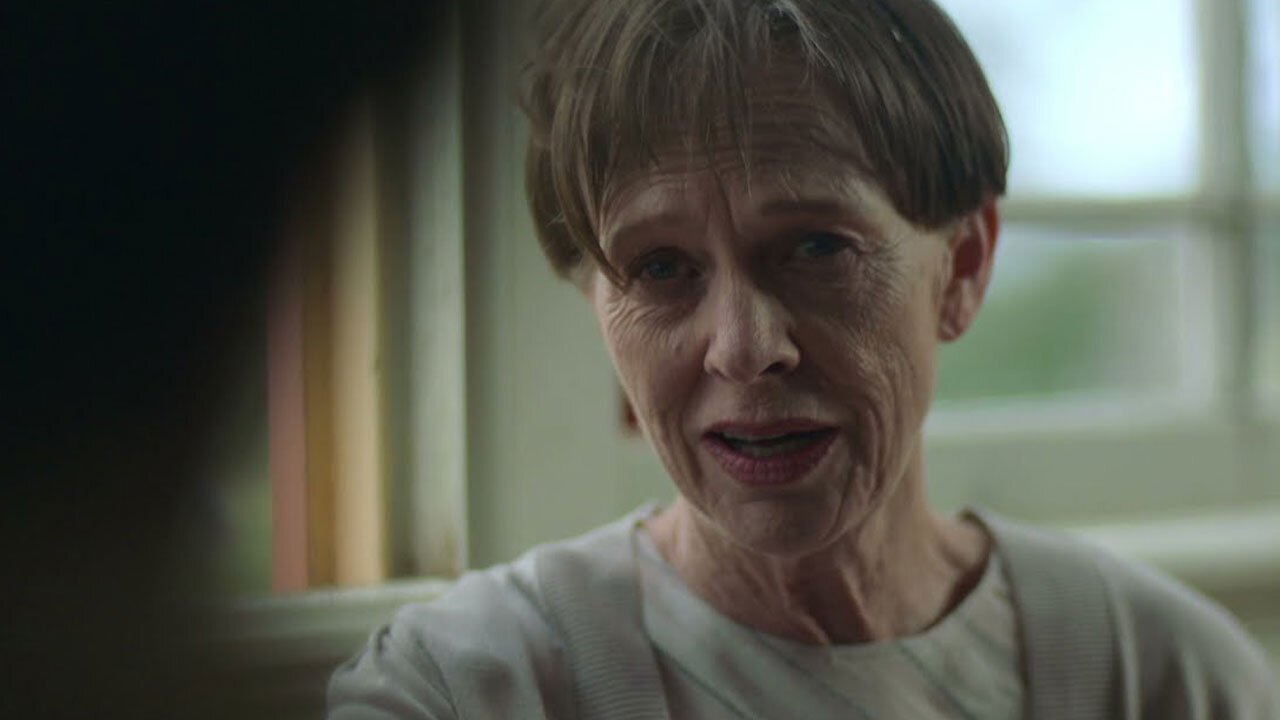 He is not a sociopath- he lacks the sociopath’s ability to function in society effortlessly. And while he doesn’t grasp the consequences of his actions, he doesn’t lack the ability to feel. He is not, say, Snowtown’s John Bunting, a man who put on a charming front and was able to manipulate his peers and whip them into a homicidal frenzy. He is reckless and lacking in the ability to understand and assess consequences.

He’s also impulsive, with a terrifying undercurrent of rage that is truly frighting when it comes to the surface. One of the most notable and terrifying scenes in the film comes when a deeply depressed Dad is in his pyjamas, unable to motivate himself off of the couch, and Nitram delivers a brutal beating, stating that that’s the way to handle it.

Dad is a very quiet and meek man who tends to give into his son (like giving him back confiscated fireworks)…is that due to being the victim of other beatings from him in the past? He also has no firm ideological agenda like many modern mass shooters have. He has an indiscriminate motivation to kill.

He also lives in his own bubble.

We see that he tries to become part of his community, plaintively watching the surfers at the beach and then wanting to buy a surfboard himself (even though he can’t surf). It’s only when he starts offering lawn mowing services that he meets a kindred spirit- the quiet and reclusive Helen (Essie Davis), the heiress to a lottery empire.

In a ramshackle house with multiple dogs and a little ginger kitten, Helen and Nitram form a bond that draws concern from his mother- are they friends, or are they lovers? Does Helen have any idea of what she’s dealing with, or is she so enamoured by her new young companion that she fails to see how exhausting and unpredictable he is? 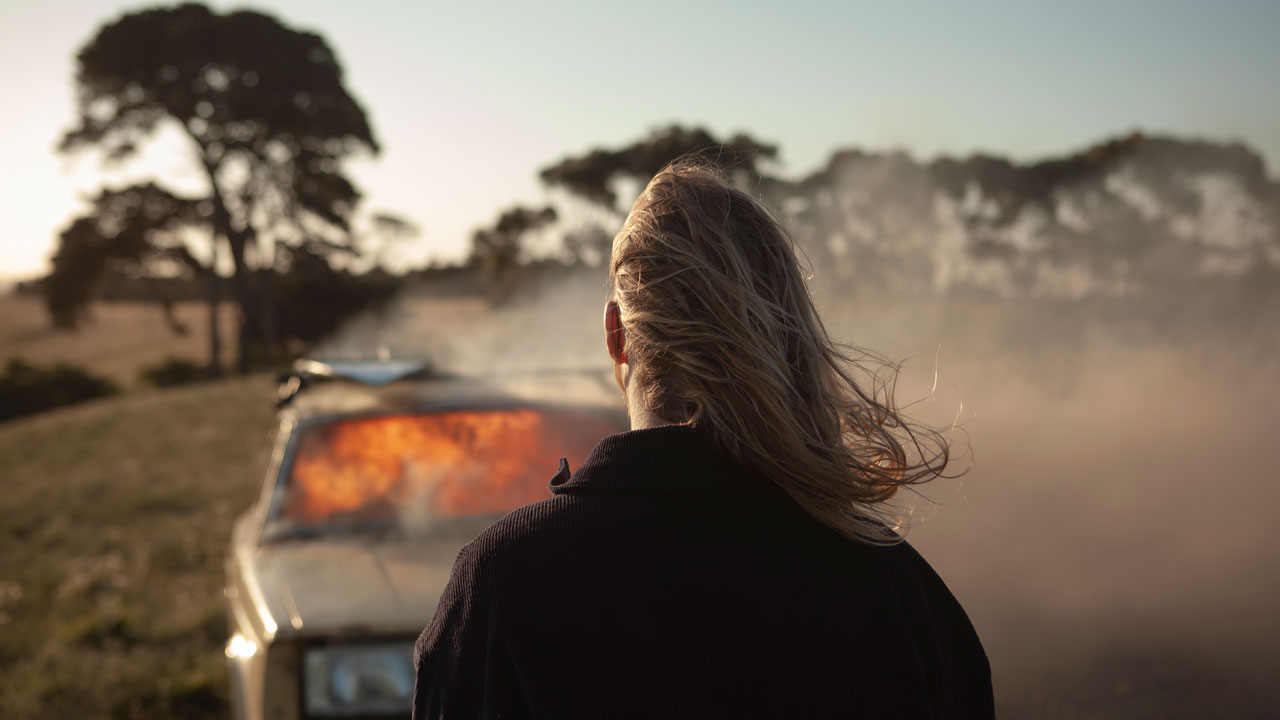 There’s a fascinating interplay between Nitram and local surfie Jamie (Sean Keenan). Jamie embodies everything that Nitram can’t be- he’s handsome, the local women love him and he can surf.

There’s a truly painful moment in Nitram where Jamie and Nitram are smoking weed in the car outside a local pub with Jamie goading Nitram to ask a girl out before Jamie approaches the girl and takes her away. Nitram can’t have the power and the popularity he sees Jamie has, so instead of picking up a surfboard again, he turns to guns. In fact, prior to the massacre he walks up to Jamie at the beach and offers him a pistol- is it an attempt to make Jamie like him because he now has his own totem of what he sees as power?

Shaun Grant’s solid script, Justin Kurzel’s deft direction and the absolute powerhouse performance by Caleb Landry-Jones makes it possible to have little pity for Nitram. This is a good thing, as Nitram is not an attempt to sympathise with the character.

There has been creative license taken for the sake of the film which works in its favour: for instance, the real gunman had a little sister. He also had several romantic relationships (and was in a relationship when the massacre happened), and the events surrounding the accident that killed Helen in real-life are shrouded in mystery (although the gunman was in the car when it happened).

This helps to streamline the narrative, but also strengthens the way in which characters interact with one another. Without a sibling in the mix, the focus is very much on Nitram and his parents; fleshing their characters out in order to advance the story and see the impact his behaviour has on them. Without a girlfriend in the story the relationship between Helen and Nitram can be explored in greater detail, and the scene with Jamie and Nitram in the car has even deeper impact.

While the film doesn’t depict the events of the massacre visually, it must be warned that the first murders (at the Seascape Cottage, the place Nitram’s father failed to purchase to turn into a B&B) are captured in audio, and Nitram is also seen in the café at Port Arthur before he turns on a video camera and picks up the bag filled with his arsenal. So if that is potentially triggering, you may want to avoid this film.

With Nitram Kurzel and Grant have created (either inadvertently or deliberately) a triptych of Australian crime tragedies which started with Snowtown, followed by The True Story of the Kelly Gang and completed with Nitram. The creative progression from Snowtown to Nitram 11 years later shows that the director and writer duo have the ability to centre these films around strong characters.

They’re not afraid to peel back the layers of a character’s motivation for heinous crimes but they refuse to sanitise nor sympathise with perpetrators. Nitram is genuinely worthy of the praise and awards it has deserved. 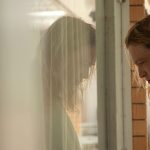