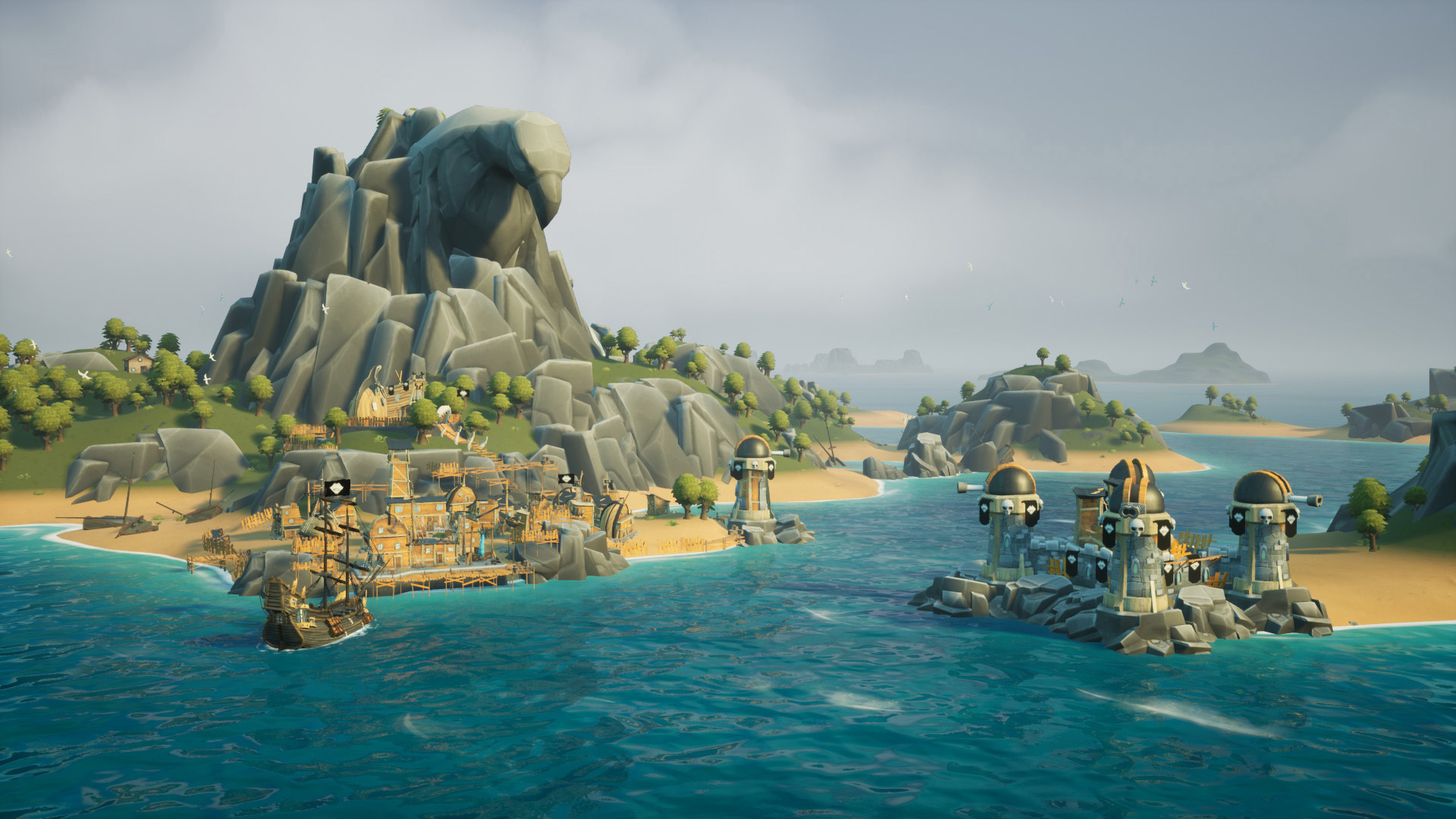 There’s something about unloading your cannons into the hull of an enemy ship.

Sid Meier’s Pirates! introduced me to ship-to-ship combat, a mechanic refined in the Assassin’s Creed games and defined by Rare’s Sea of Thieves. King of Seas takes a more retro top-down approach, but it is charming, nevertheless.

Players take on the role of Luky or Marylou, a freshly minted pirate who is also the rightful heir to the throne. Taken in by the pirates, players’ chosen character is taught the tricks of the trade and sent out to make their fortune, all the while trying to find out who was responsible for their father’s death. 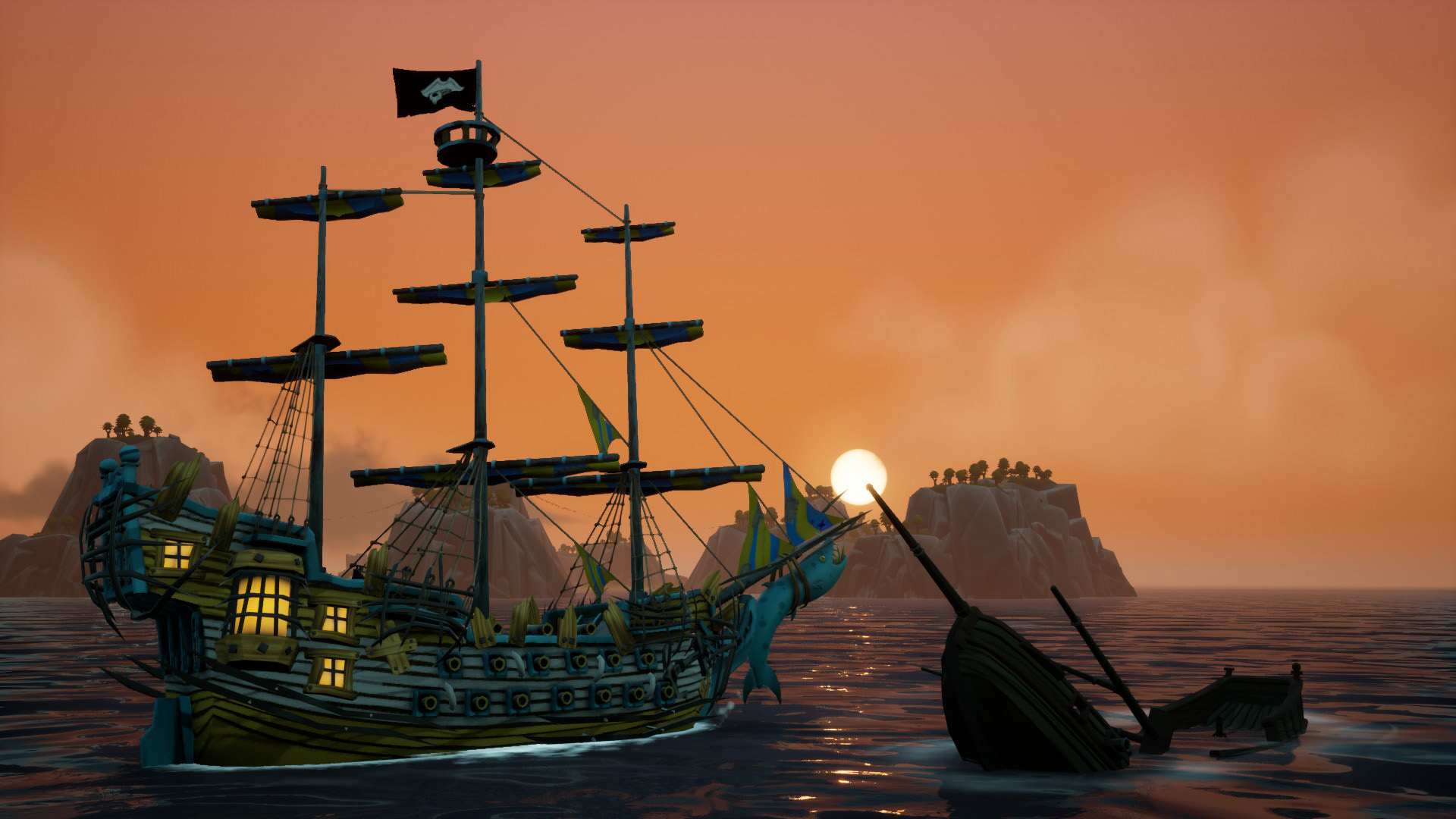 The story progresses via conversations between your character and the denizens of the Kingdom of Seas. I did find a lot of these interactions, beyond the useful tutorial missions, to be rather superfluous and skippable.

King of Seas has a nice look that does seem to be a bit borrowed from Sea of Thieves. The cartoonish look does suit the story, though. Whilst you can zoom right in on the action, I found myself seldom doing so. Most of the time, you’ll want to be zoomed out to see what’s going on.

The game is mission-based, with the story progression via the main questline. These start as a series of tutorials before allowing players a free run of the game world. Some of the main missions can be a challenge and may require players to take on a few side quests to level up and gain the weaponry and armour required to progress. 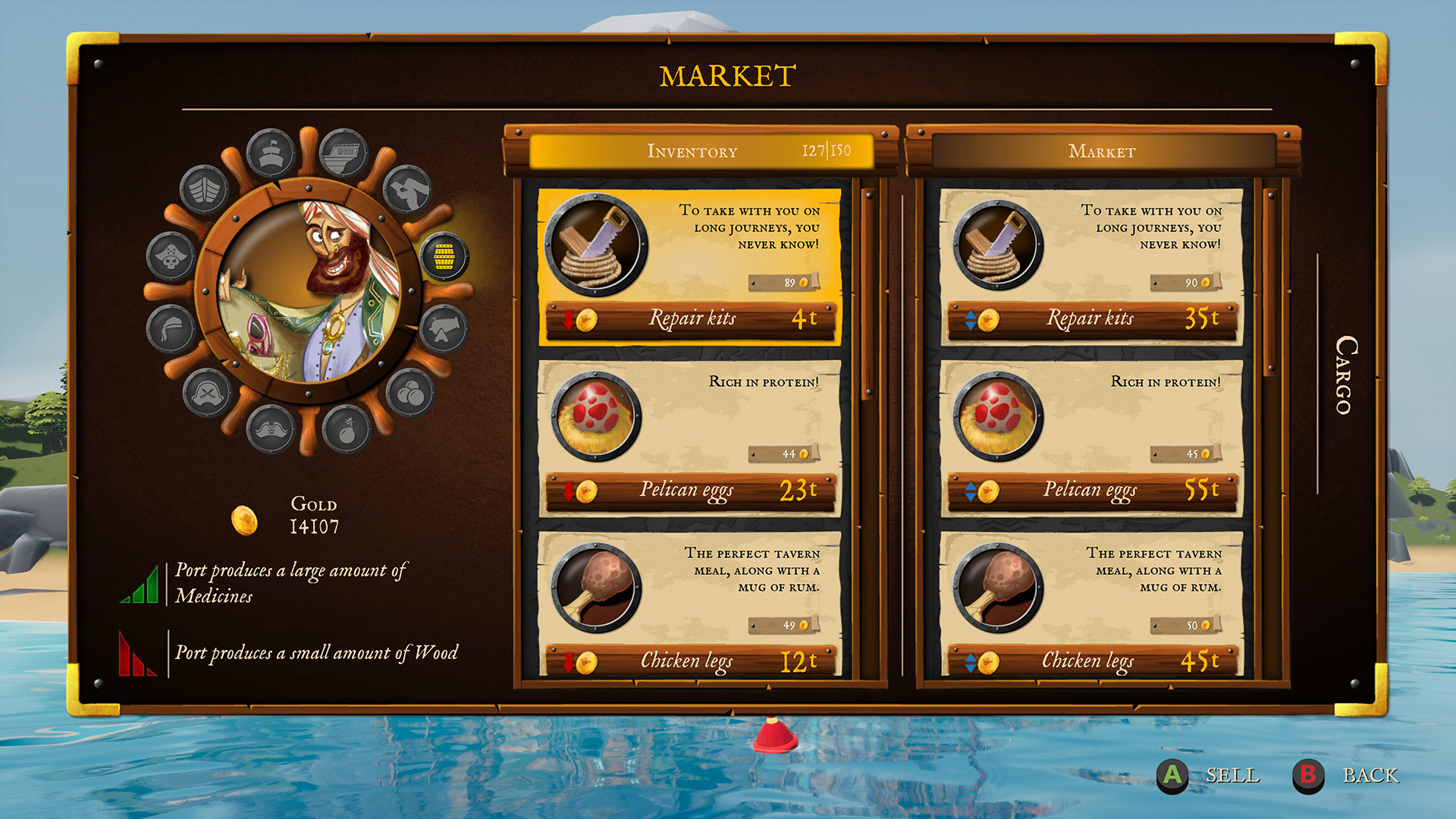 The missions range from supplying a character at a certain port with a specific quantity of a cargo type or escorting other ships to destroying another vessel.

Players start with a basic sloop, a reasonable crew, and basic armaments. The ship and crew can be upgraded to increase its effectiveness.

New ships can be purchased that are more powerful and can carry more cargo.

The ship’s controls are very simple; unfurling the sails allows for half and speed, which is also affected by wind direction. Turn arcs depend on the ship’s speed, very important in combat when you want to line up your cannons for a broadside hit. 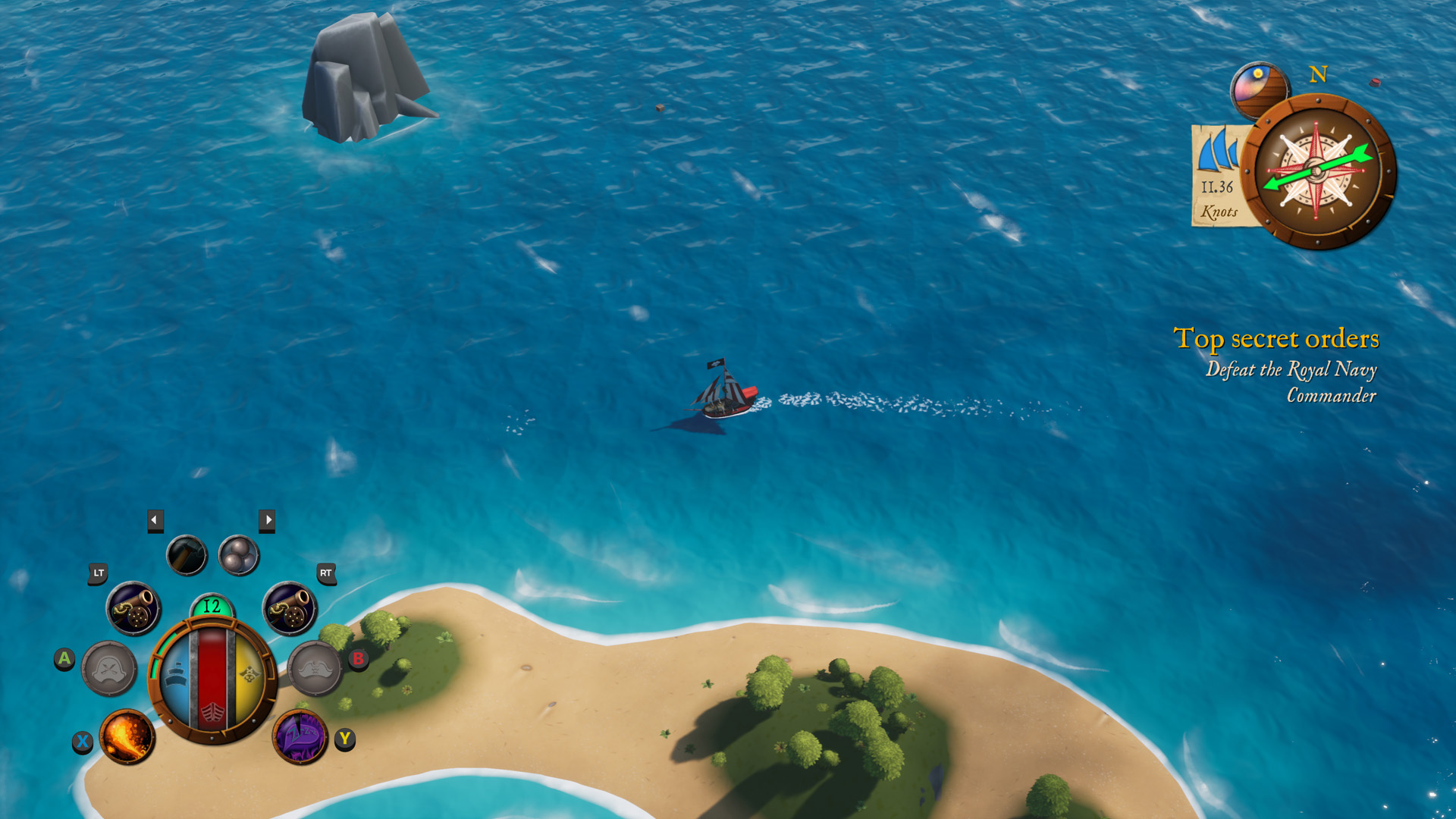 The combat is where King of Seas shines.

Some crew members have special abilities and you can also mount optional weaponry, i.e. a front-facing flame thrower.

The upgrade path and menus are a bit cumbersome. I found that the radial dial that you use to select item types to be very sensitive. It’s probably OK on PC with a mouse, but a nuisance with a controller. Progression is very slow, as fun as it is.

I felt that the game been artificially drawn out a bit. 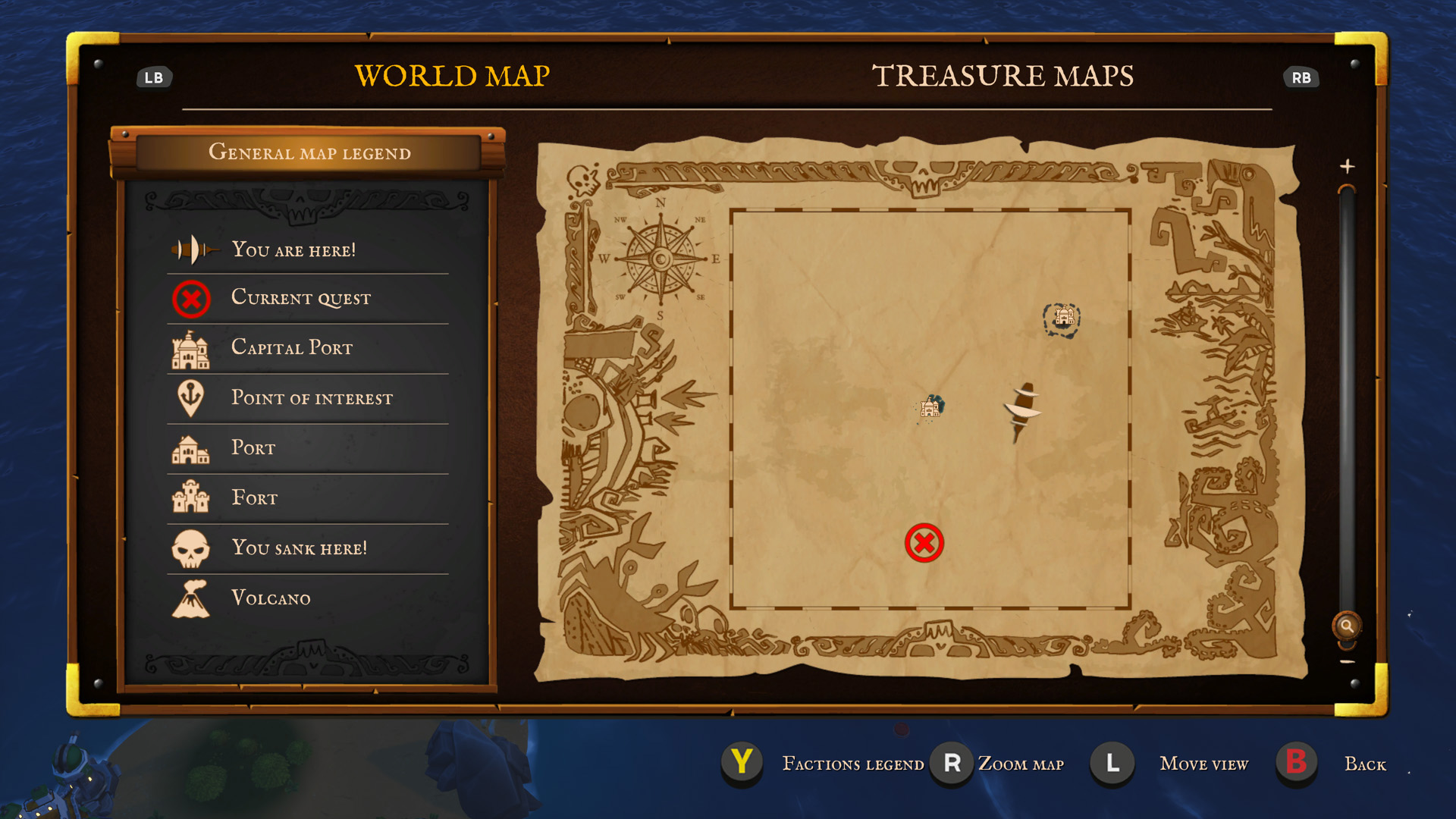 The game gives players a huge procedurally generated map to play on. There’s a full day/night cycle and weather effects.

The map is dotted with islands and ports.

Other ships are sailing around ferrying cargo and treasure, ripe for plundering. There are also Royal Navy ships and pirate hunters itching for a fight. It’s a very dynamic world and it’s not unusual to come across two AI ships engaged in battle.

As well as enemy ships, hostile fortifications and sea creatures are also a threat. 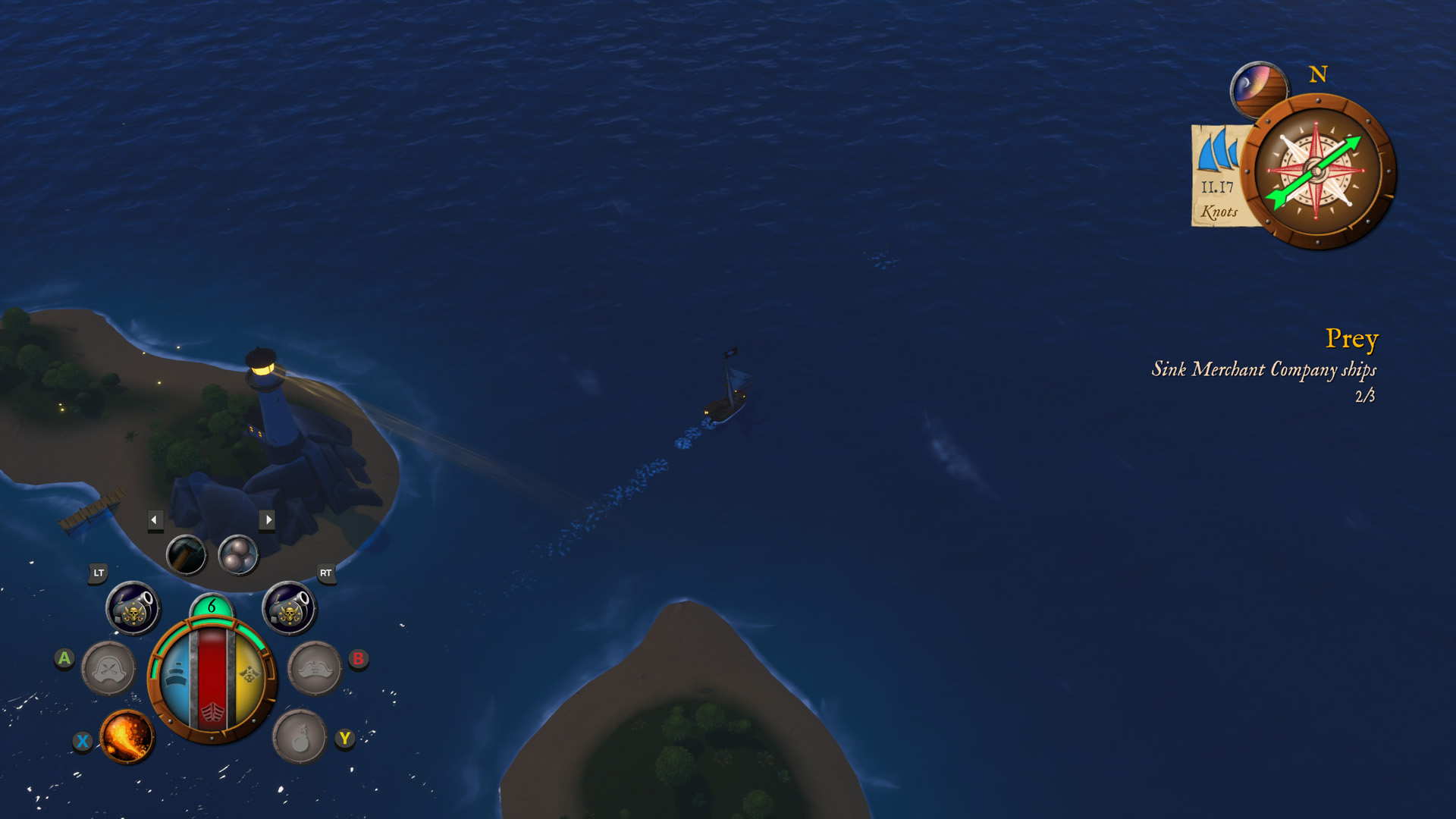 At the start of the game, the map only shows the King’s Fortress and the pirate port of Eagle’s Den.

Weather stations dotted around the map have cartographers that, for a fee, will add local islands and ports to the map.

When docked at a port, players can visit several vendors and services. This is where players can purchase ship upgrades, do some trading and take on side quests. Docking at a port also saves the game.

The carpenter can repair your ship and supply upgraded parts and crew. Ship items surplus to requirements can also be sold.

Banks can be used to store items and cargo. Items deposited at one bank can be recovered at banks in other ports. The market allows players to buy and sell cargo. Ports will specialise in some items but require others. Buying low and selling high is a good way to make gold as you traverse the map. 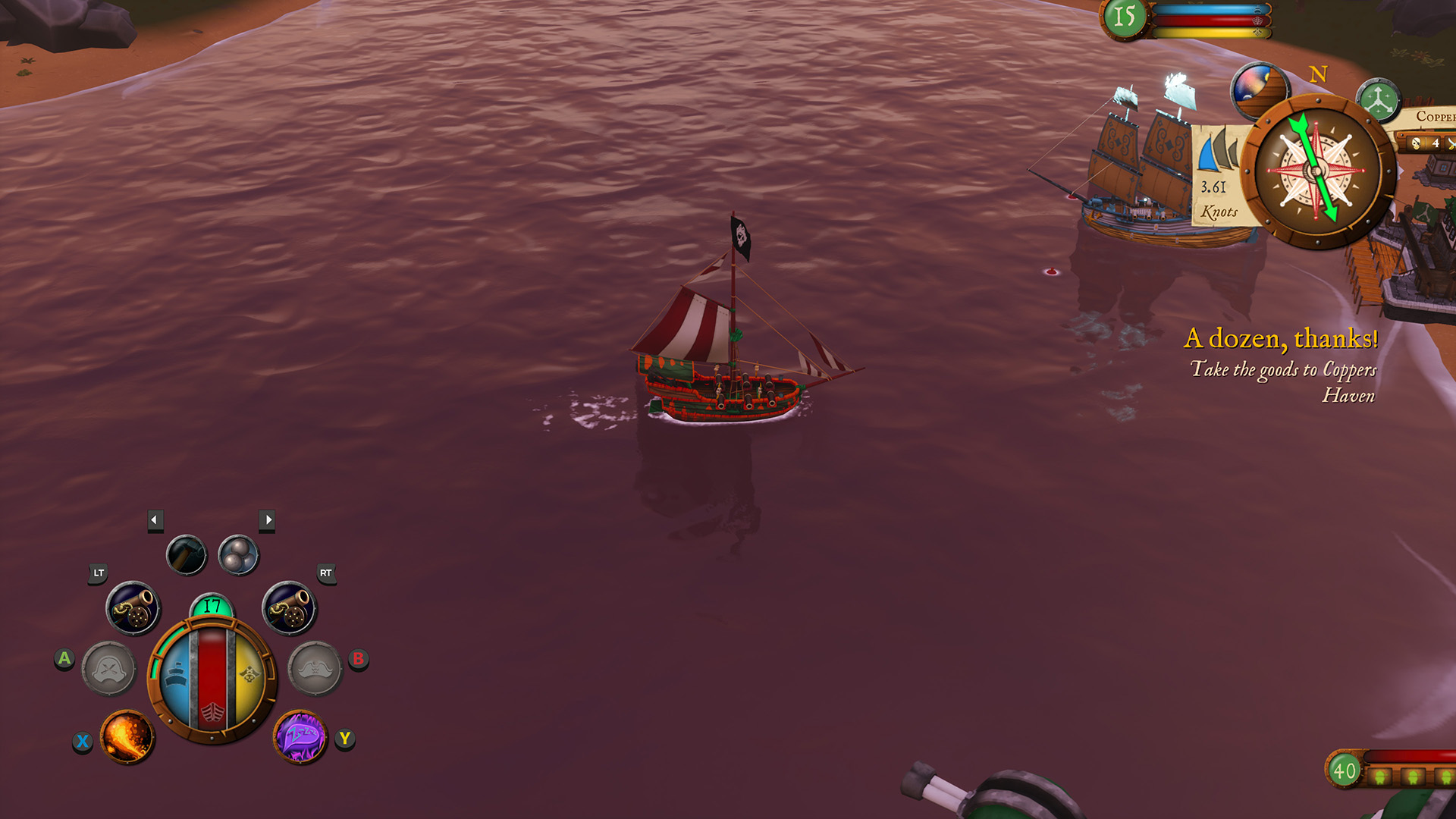 The market also sells repair kits for fixing damage to the ship whilst at sea.

Taverns are where replacement crew members can be hired (assumedly to replace those killed during skirmishes) and side quests obtained. Players can take on up to ten side quests.

Apart from quests, the best way to gain experience and money is, of course, by being a pirate.

There’s a lot of fun to be had by exploring and carrying out acts of piracy on unsuspecting ships laden with goodies. Loot can also be found floating on the ocean as well as in treasure hoards on the various islands.

King of Seas is a fun distraction that overs a surprising amount of gameplay for what are very simple game mechanics. The menus and upgrades are a bit of a mess and the story is for the most part superfluous.

But it is still a good game, especially if you like pirate games! 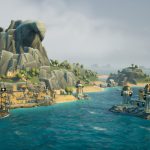