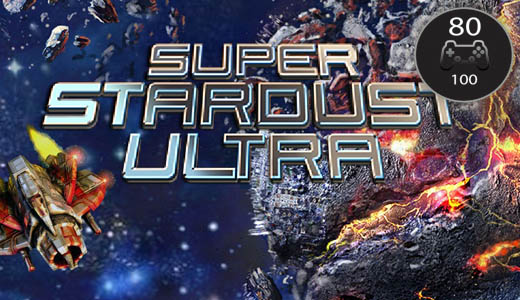 Classic Arcade gaming speaks to the stripped down heart of the medium, where success and enjoyment are all conditional on the speed of your reactions and your rewards are arbitrary points and almost addictive senses of frustration.

Along comes Super Stardust Ultra, follow up to 2007’s very well received Super Star Dust, to recapture that simple visceral thrill of an entirely game play driven experience.  While it may not totally reinvent itself, it definitely provides enough polish and bonus modes to justify its modest purchasing price. 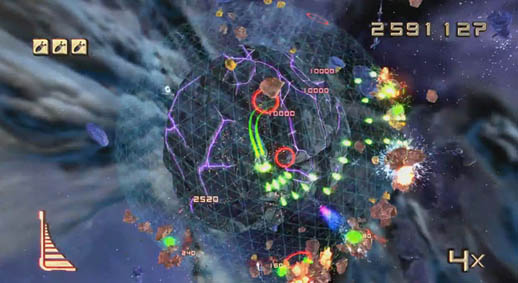 As returning fans will remember, each Level is a small sphere which your ship navigates, points and weapon upgrades are distributed through drops from the constant stream of meteors which are bombarding the planet.

The meteors form dynamic obstacles which you must avoid, all the while gunning down enemy ships as they attack. The meteors provide an interesting device, you must blast them apart to reach their valuable innards, but each meteor you destroy fragments, filling the Level with potentially lethal shrapnel which take time to mop up. 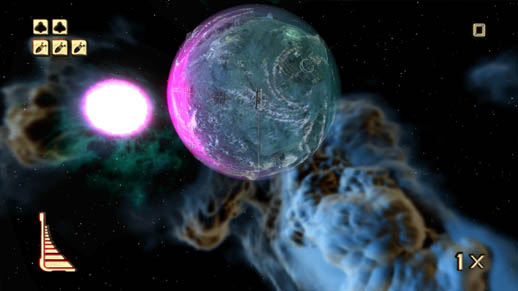 Your rock cutter works effectively on the bog standard meteor, the gold meter predictably melts the solid gold meteors that fly at you while the ice blaster destroys what you expect it to destroy.  This makes for an enjoyable gaming juggle when you are forced to destroy each meteor with its appropriate weapon while at the same time reacting to the enemy forces around you and timing each upgrade to suit your environment and play style.

This kind of frenzied, effects soaked multi-tasking is the joy of this style of game. 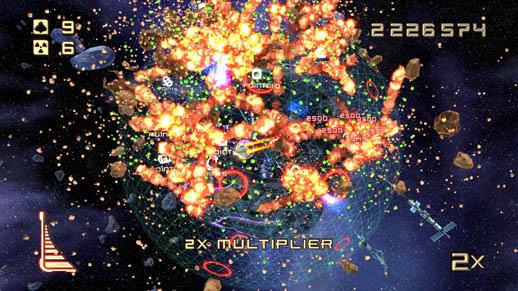 Graphically the game packs enough particle effects and saturated neon richness to please even the most jaded of fans.

The screen becomes wonderfully cluttered with explosions and debris with each flurry of lasers but still manages to do the tricky proposition of keeping all of this detail from becoming overwhelming at any point.  The actual piloting of your ship and use of its weapons is all extremely tight and pleasurable, the controls are straight forward as you’d expect, but responsive enough to let you feel that you’ve genuinely improved as a player after a few intense hours. 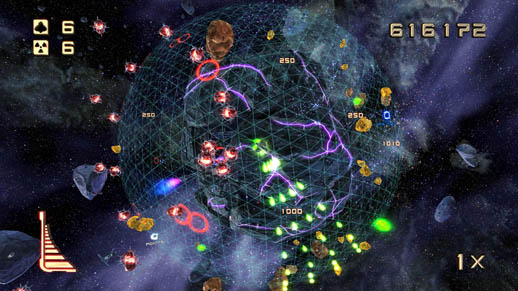 The three base weapon classes are all upgradable during each Level, however the upgrades that do drop are time sensitive, what drops as a blaster upgrade will become a Gold Melter bonus in moments so you need to stay aware to upgrade your preferred weapon which adds an extra layer of game play complexity.

Level design is truly crucial for the arcade format, as the basic gameplay options are limited as a part of the medium, it is this that provides the variety and flavour of the game. 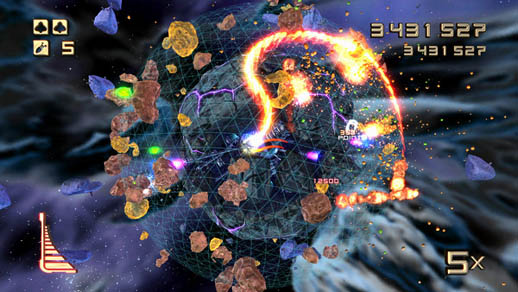 It is unfortunate however that the Level design is slightly repetitive as the game progresses, essentially shaking up the same map type with rehashes of the same bosses. This disappointment is however mitigated by the fact that there are a rich variety of game modes to enjoy from high powered explosives, match type through to a voyeuristic online game where viewers decide what happens next.

Arcade games were always meant to be played with friends; a substantial part of their allure is standing around, egging on your friends as they annihilated each other on screen. Star Dust manages to capture some of this joy, by offering several multiplayer modes and a well realised local co-op mode, which is even more important than online modes for this style of game. 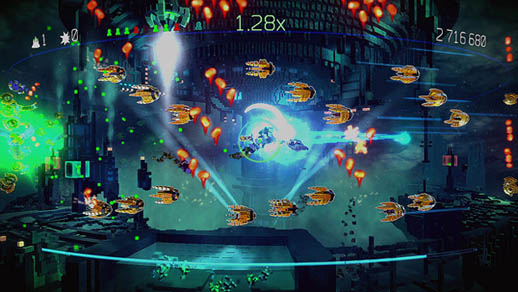 Super Stardust Ultra is a perfect example of what happens when the arcade formula is polished to a next generation sheen, with a simple base premise that is layered with multiple game play modes, tight game play and most importantly, a constant sense of mindless fun.