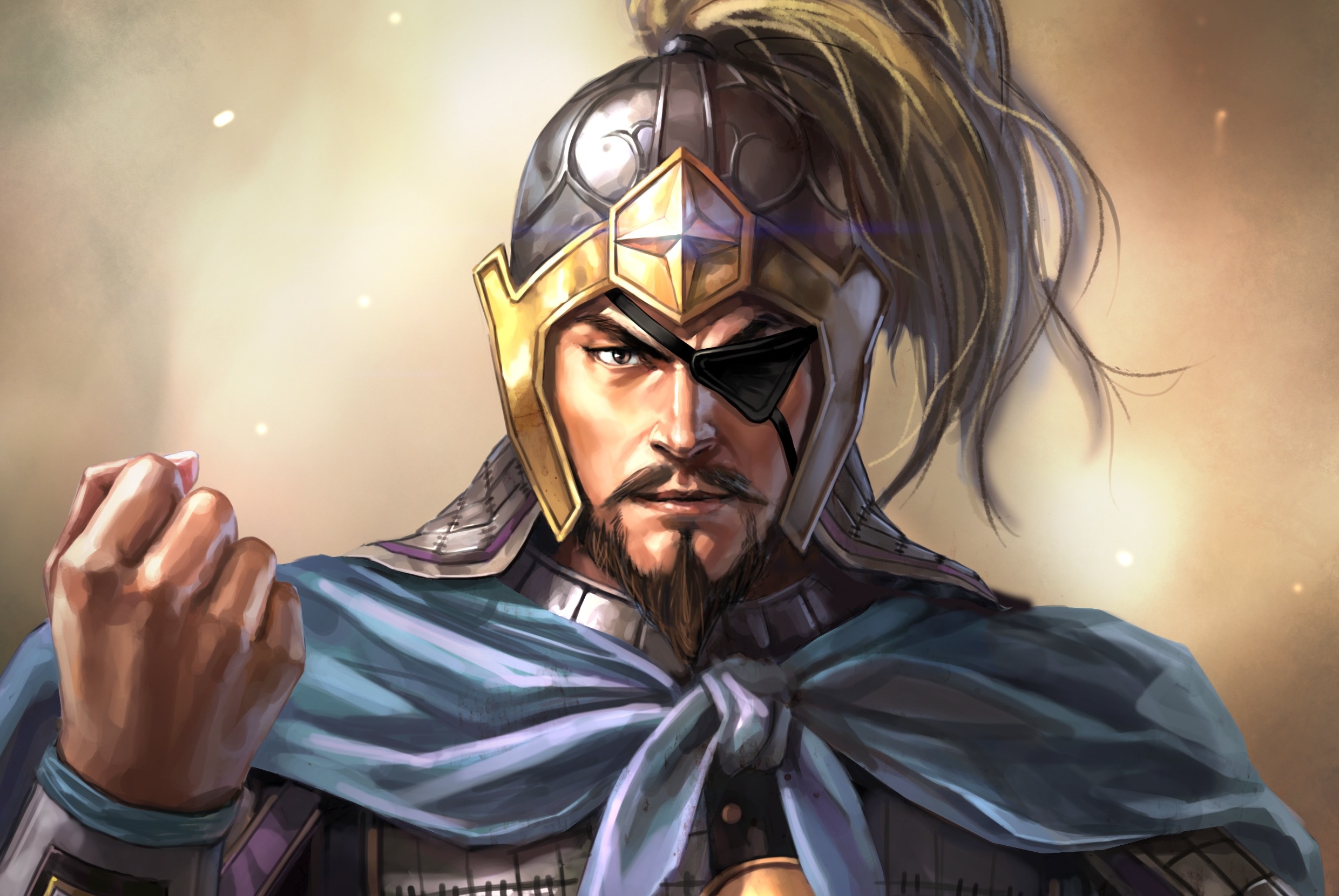 There are certain expectations I would have of the thirteenth game in a series. By then I would expect the developers to have had ample time to play around with ideas to find what works and what doesn’t. I would expect there to also have been some particularly well-developed core mechanics that have been refined and improved over time, a platform or soul that each game builds off.

Despite looking hard, I couldn’t find anything that met this description in Romance of the Three Kingdoms XIII. Instead what is present is a lot of different poorly implementedinteresting ideas that feel like they are being experimented with for the first time.

Unlike its famous cousin Dynasty Warriors, Romance of the Three Kingdoms XIII takes on the intriguing but arguable overdone Three Kingdoms era of China in the form of a real time strategy game. While I would say the game bares some similarities with the Total War series, the game really is unlike any other strategy game I have played. 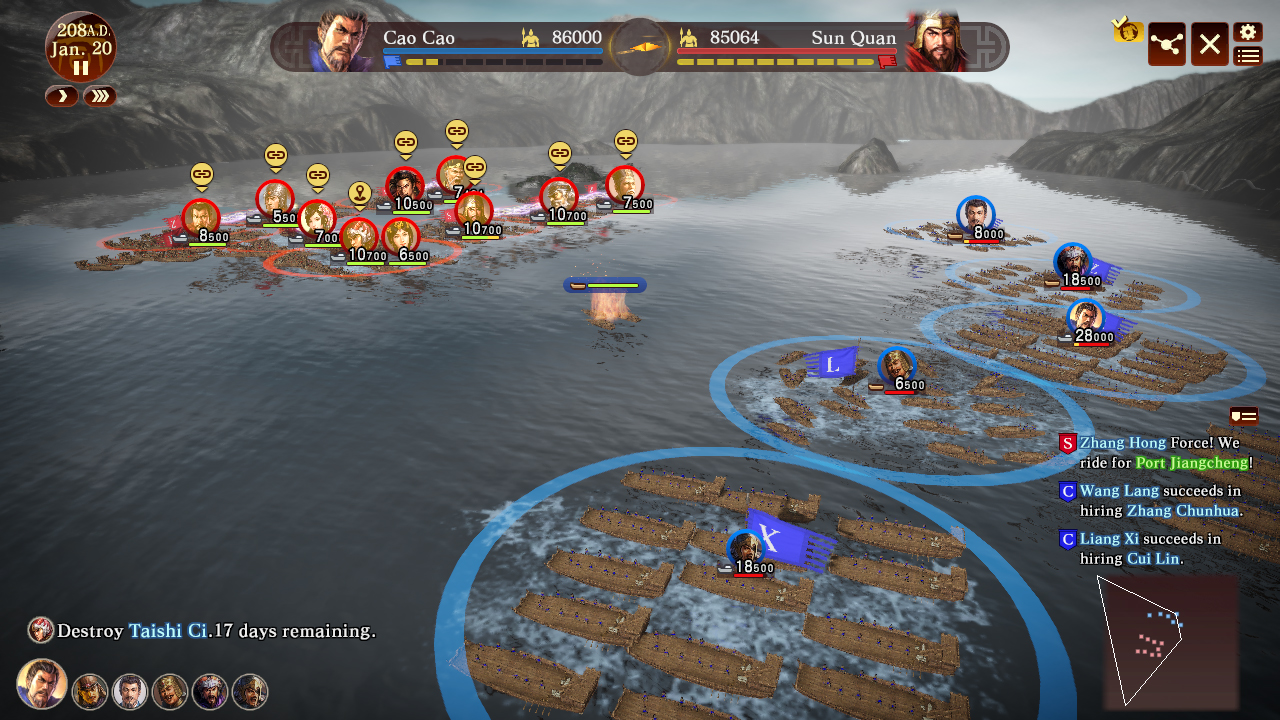 Instead of playing as an entire empire, you assume the role of a single character. Your character’s role in their particular faction determines what your day to day duties are. As a ruler you will be set the task of delegating various duties to other officers and generally setting the direction of your empire. You will primarily rely on other people for completing the non-war related tasks.

As a low ranking officer however, your concerns lies much more selfishly. Although you will have some concerns with the overall direction of your chosen faction, your more immediate concerns are increasing your rank in the empire and doing whatever it is you find fun to do.

Even though power sounds like a lot of fun, I actually preferred being in the lower rungs of society. The words ‘With great power comes great responsibility’ rings very true. Your responsibility comes in the form of having to manage one or more cities or even an entire faction which turns out to be very dull. 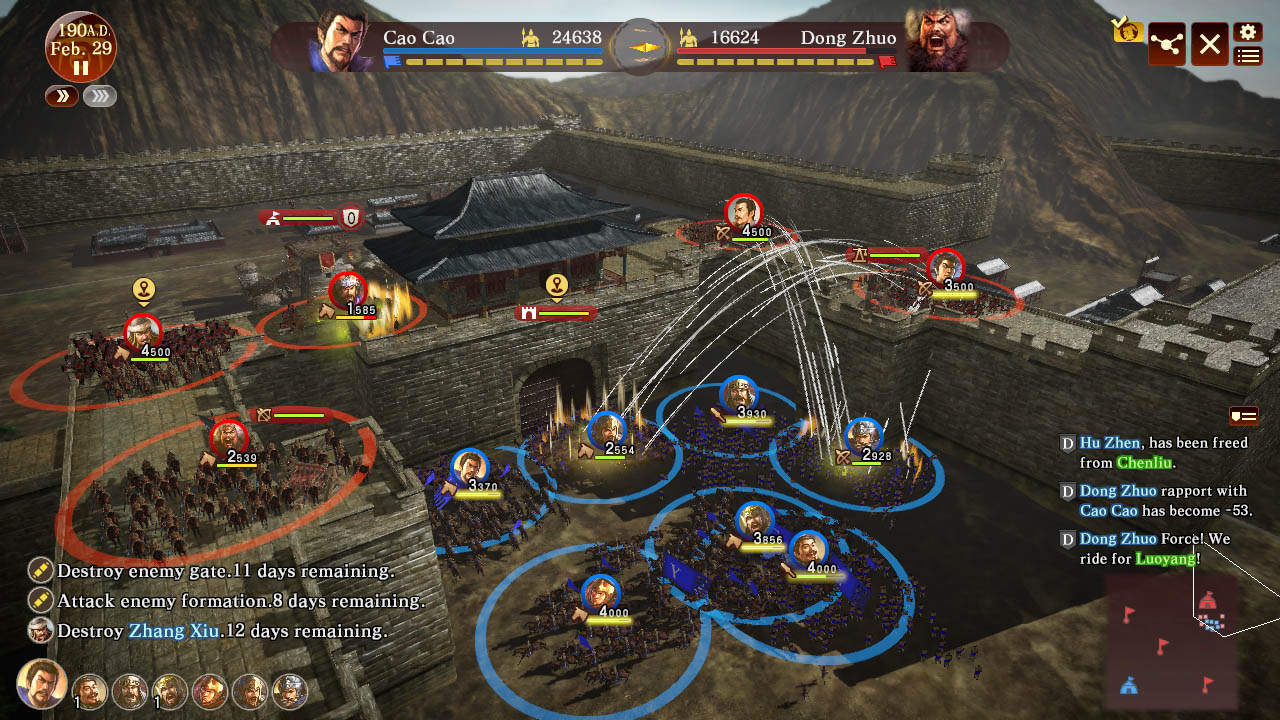 As someone with power over a city, most of your time will be spent managing orders for your various officers, or more specifically waiting for them to completed. As a lower ranking officer, you are restricted to just suggestion missions to be completed and completing them yourself. As you rank up you will eventually have to manage all missions undertaken in a city, both those that you issue and those suggested by others.

The sheer number of mission types available is initially overwhelming but becomes pretty simple once you get your head around it. The main types of missions you will be issuing boils down to improving your city or improving your military. While important, it is very grindy, being both dull and offering only minor incremental reward. Undertaking these tasks is very hands off, you initially select a few things about how you will undertake the mission then you simply wait the allocated time. 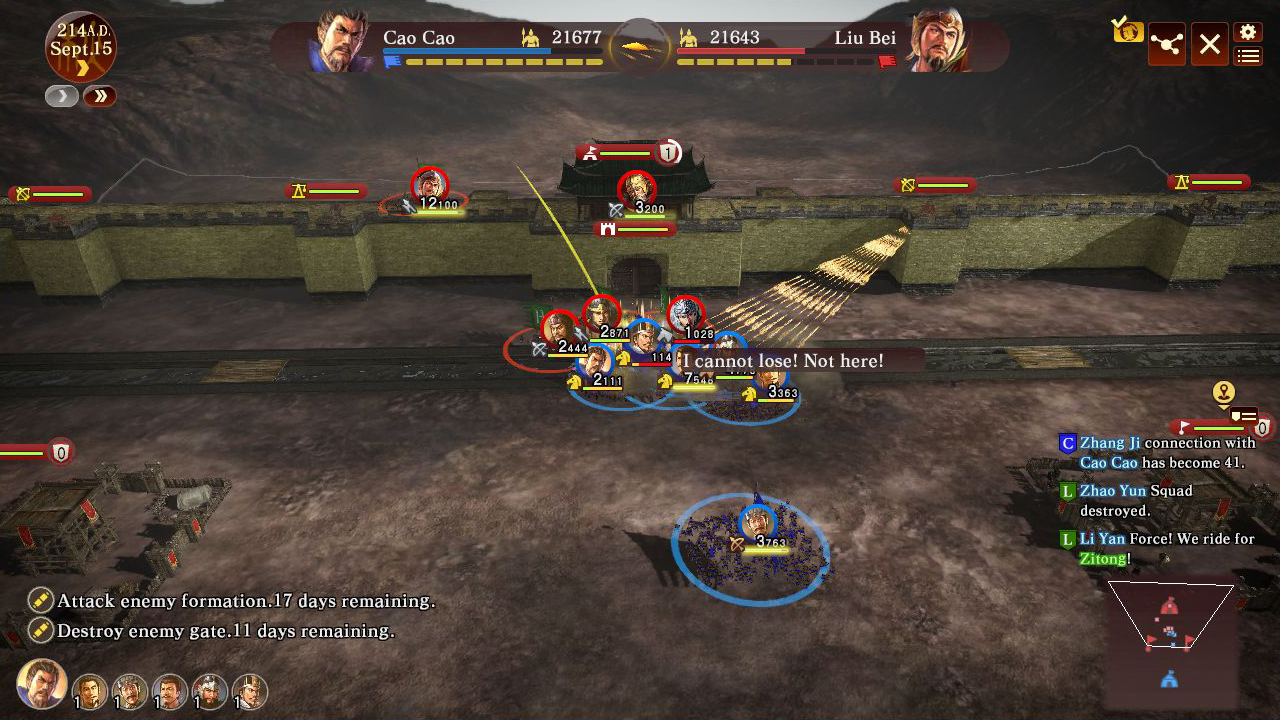 There are more hands on missions like negotiating alliances and convincing enemy or unaligned officers to join you. These missions are however either only rarely required or opportunities to undertaken them will naturally be picked up by your other officers. While the idea of issuing orders for your followers is sound, it is ultimately too boring and unengaging.

When it comes to war, things start to get a bit more fun. Once you initially deploy an army from a city, you must select the number of troops and supplies that army takes with it.This is where all those mundane orders you were issuing and completing finally sees some fruition. I really enjoyed that you have to balance supplies and troops. You consequently have to make tough choices about who to attack and when to call your military campaign over.

When your army finally engages an enemy, you enter a real time battle with them. The battle system is a bit like a very dumbed down version of the Total War system. A battlefield is created with opposing teams deployed on opposites sides. Each officer has a certain number of troops under them which move all as one unit. 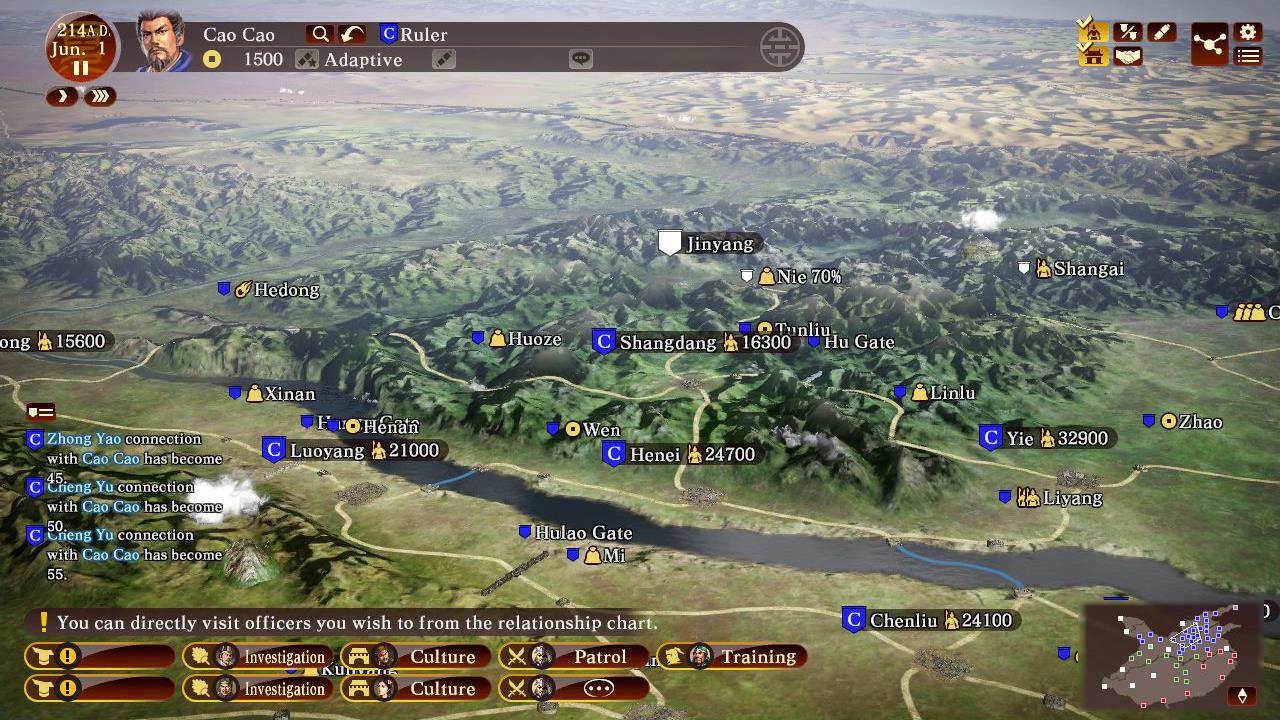 In theory there is a bit of strategy that can be deployed, get behind units or take bases to lower their morale. I was playing the game on PS4 using a controller which made moving individual units around the battlefield super tedious. In the end I generally resorted to relying on the overwhelm with numbers approach, simply selecting all my units to attack one unit of theirs.

The most interesting thing about the battle system is that is takes real time to the next level. As time goes by the in battle, so does it in the campaign. This means a couple of important things, first of all that your supplies will be decreasing and secondly that it is practical to send out reinforcements to the battle. As I wasn’t taken in by the battle system, I frequently decided to opt out of controlling the battle and instead manage the reinforcements as well as other military efforts being undertaken in tandem. 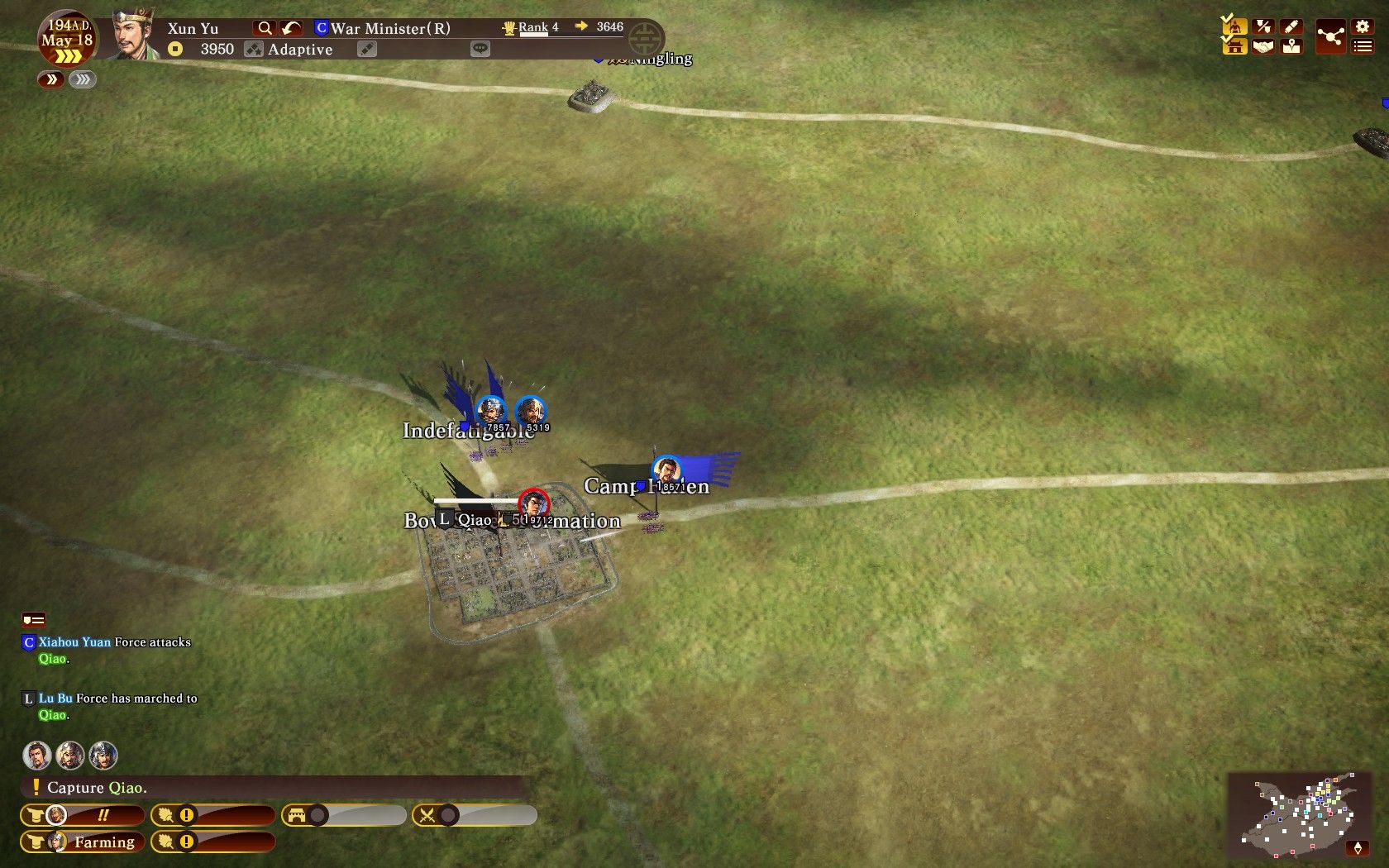 There are two modes in the game, Hero Mode and Main. Hero Mode acts as both the story mode and the tutorial. Here you follow the Three Kingdoms story whilst being introduced to the overabundance of overly complicated mechanics. Due to how many things there are to learn about the game, it is hard not to recommend jumping into this mode first.

The story is for the most part told quite well, focusing more on the political events that unfold in the historical novel of the same name. As the story progresses you jump between different characters and factions which provides a broader overview of the story. The mode does drag on and the inherent linearity goes against the core nature of a grand strategy game such as this. As a result, I struggled to make it through to the end of the story.

Unlike Hero Mode which suffers due to how closely it follows the story, Main suffers from quite the opposite. In this mode you choose a single officer from one of a few preselected time periods. Some key events do occur as per the story however things play out due to a combination of chance and your influence. I would have personally liked to see a bit more story present in the game or at least more of a focus on the distinct personalities of the characters. 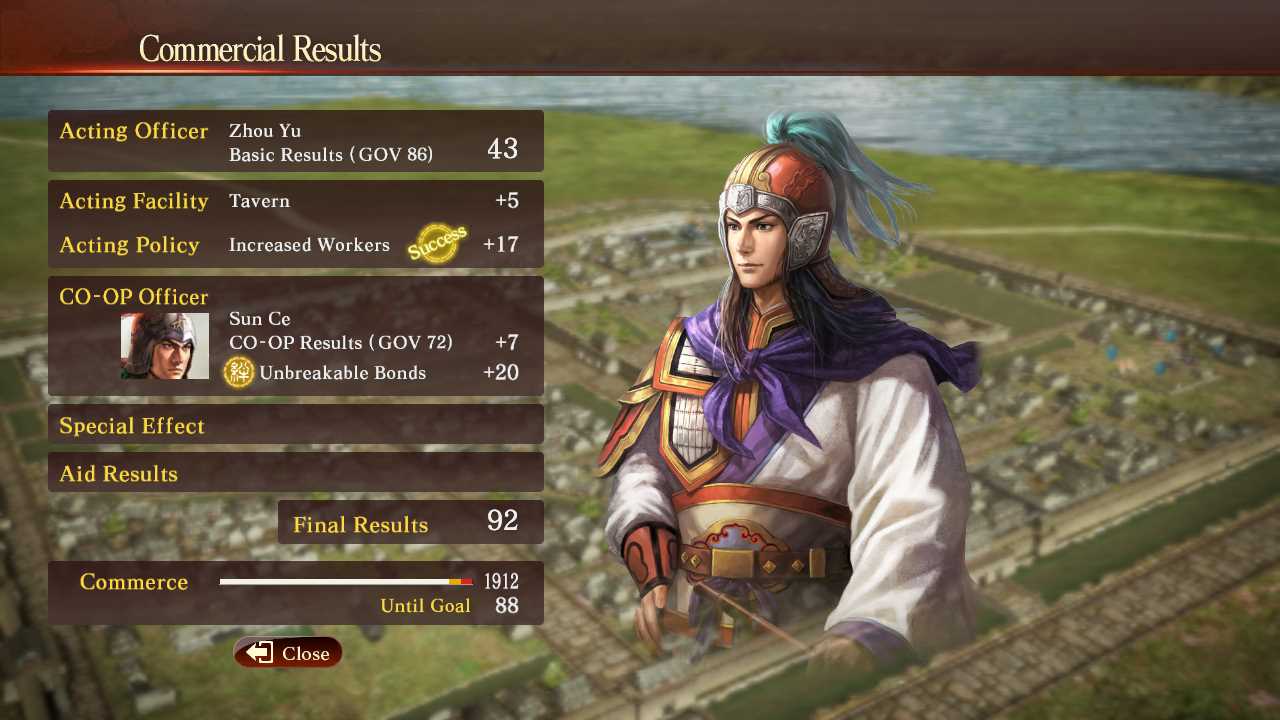 Little effort seems to have went into making the game look nice. The environments generally just look a bit ugly.

Finally, I have to talk about the menus. Mentioning menus in reviews is typically restricted to when they are extremely well organised and intuitive or an abysmal mess. Unfortunately, I bring it up for the latter. There have been very few games where I have felt overwhelmed and confused by the menus. This is one of those game.The problem mostly stems from how complicated the game is.

Romance of the Three Kingdoms XIII is a game of many good ideas very poorly implemented.With further refinement and development, there was the potential for it to be a truly great strategy game. What we are given instead though is a sub-standard strategy game that just isn’t fun to play.