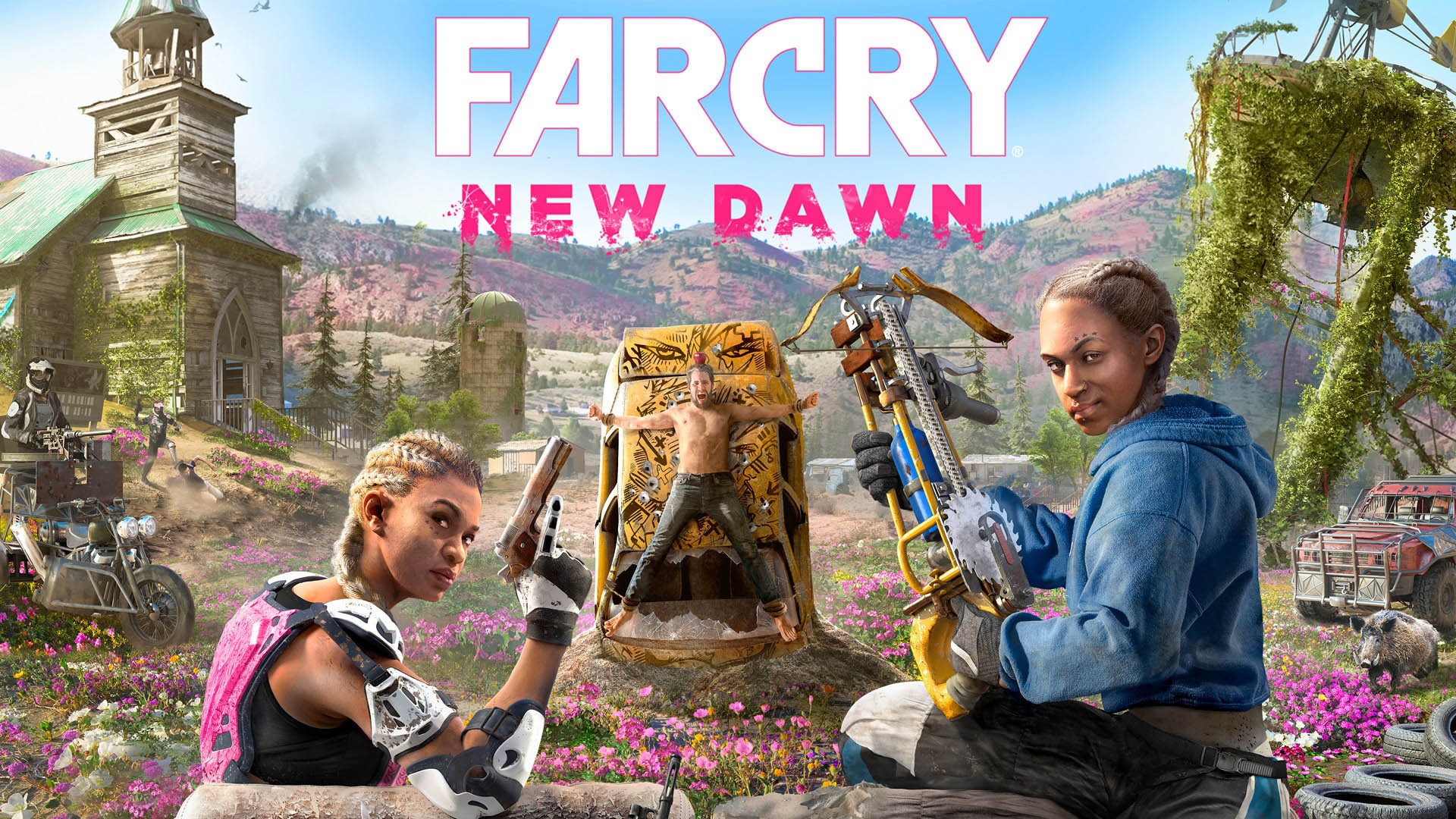 This direct sequel to last year’s Far Cry 5 came out of the blue when announced at the 2018 Game Awards in December 2018. Set some seventeen years after the events at the end of the last game, Far Cry New Dawn uses almost the same map as its predecessor, and we get to catch up with some familiar characters.

It’s impossible to explain the premise of the game without spoiling the end of Far Cry 5. So, forgive me. If you’ve not finished Far Cry 5 you may want to stop reading, now.

Far Cry New Dawn follows the events of the canonical ending of Far Cry 5 which concludes with the protagonist and Joseph Seed in a nuclear bunker as nuclear bombs decimate the US.

Seventeen years later and the survivors of Hope County are slowly rebuilding their society, founding the settlement of Prosperity. For a post-apocalyptic setting, the valley is remarkably colourful, full of flowers and vegetation. Trees are rejuvenating and things seem to be improving in the valley.

Then the Highwaymen arrive, lead by the sadistic twins, Mickey and Lou. 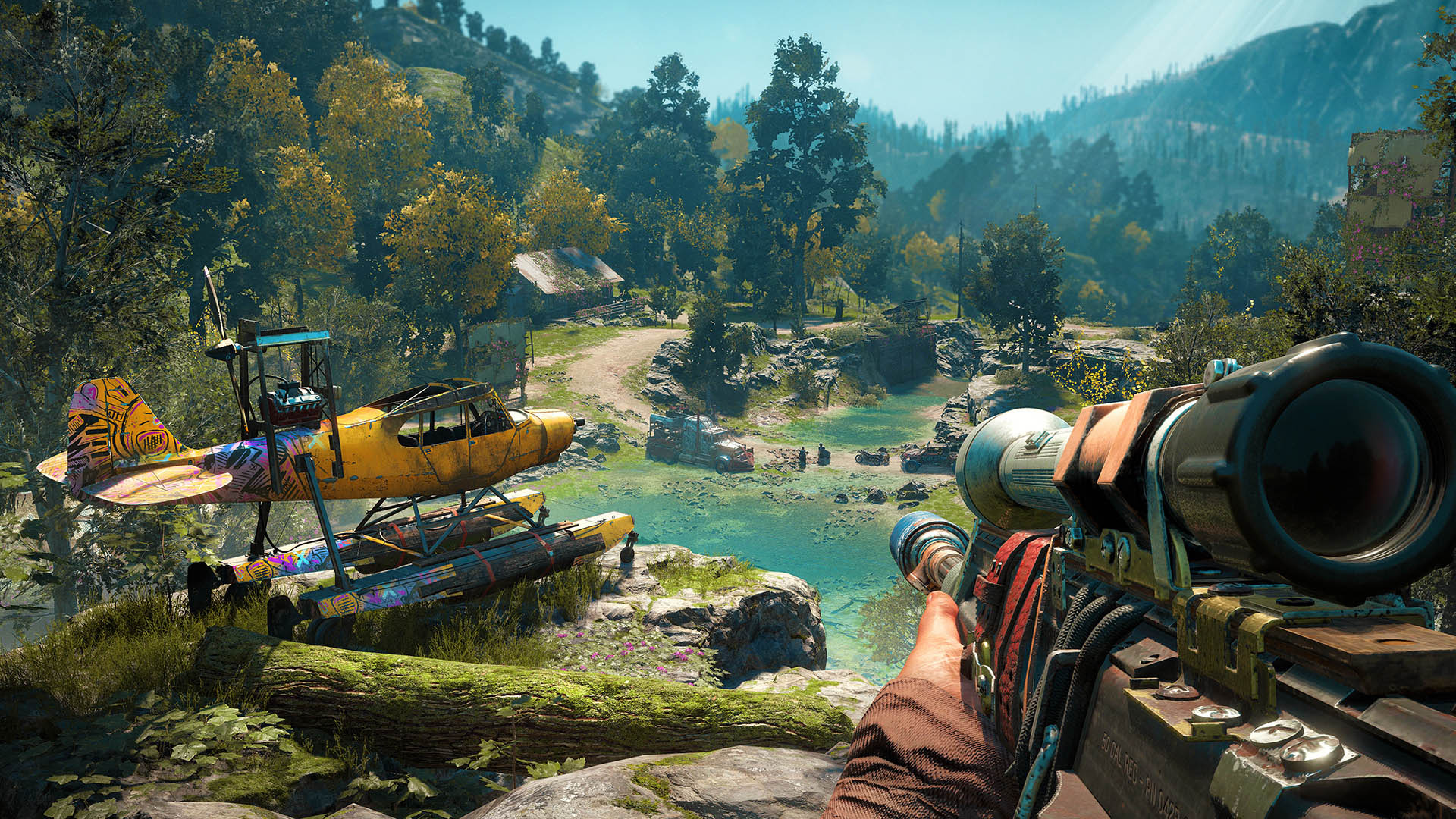 Carmina Rye, Nick and Kim Rye’s daughter, whose birth you aided in the Far Cry 5 mission, “Special Delivery”, asks the leaders of another group of survivors, led by Thomas Rush and the player character, the Captain. With the fate of Hope County on the line it’s up to players to rebuilt and defeat the twins.

Having barely just finished Far Cry 5, my first thoughts on Far Cry New Dawn were that is was a bit too soon. Ubisoft games tend to be a bit of an overindulgence, overpacked with side-missions, collectables and other activities. Whilst I’m a massive fan of both Far Cry and Assassin’s Creed, both franchises can easily give you the gaming equivalent of indigestion by the time you’ve slogged your way though them, no matter how enjoyable the experience.

Putting another 80 hours into a Far Cry game, whilst still buzzing on successfully finishing the last one, did seem a little onerous. At the same time, I thought it would be nice to find out how (or if) Hope Country survived a nuclear war.

Hot off Metro Exodus, and with memories of Fallout 76 still fresh in my mind, I’m starting to feel a bit of a veteran when it comes to this post-apocalyptic survival malarkey. When it comes to nuclear wastelands, New Dawn is, without a doubt, the prettiest. 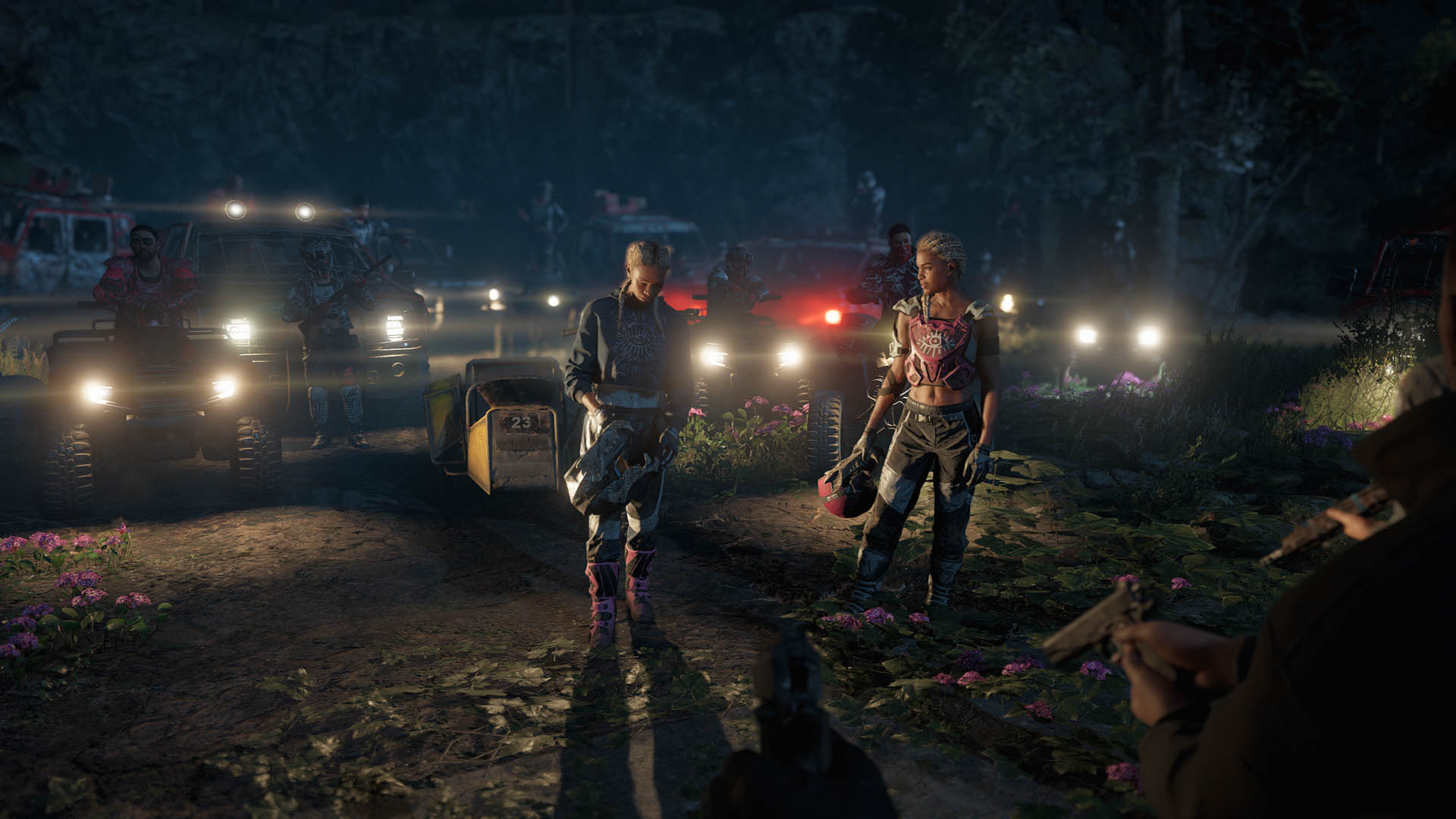 Graphically, there’s no difference from the last game. Despite its “spin-off” status is still a very polished product. Far Cry 5 on a 4K TV, was stunning. It’ll come as no surprise if I say New Dawn looks pretty special aswell.

Just as Far Cry Primal repurposed the Far Cry 4 map, New Dawn reuses the Hope County map from Far Cry 5. And why not. It makes sense, with the amount of effort that goes into building these immersive worlds, to reuse game assets in this way, especially as we are revisiting the same location years later.

Whilst the trees, seventeen years after the nuclear holocaust, still look a bit worse for wear, beautiful flowers are growing everywhere. It’s also interesting to see the roads and buildings from Far Cry 5 all beat up and in ruins.

Mickey and Lou’s Highwaymen take over from the New Eden cultists as the game’s bad guys. Very much cut from the Mad Max school of post-apocalyptic ne’er-do-wells, the Highwaymen attack on sight. Hope County is littered with facilities over-run by the Highwaymen, waiting for you to go clear house.

The Far Cry games have always been about scavenging and crafting, well, since number two, anyway. But this time, with New Dawn, the franchise adds a bit more RPG spice into the mix. 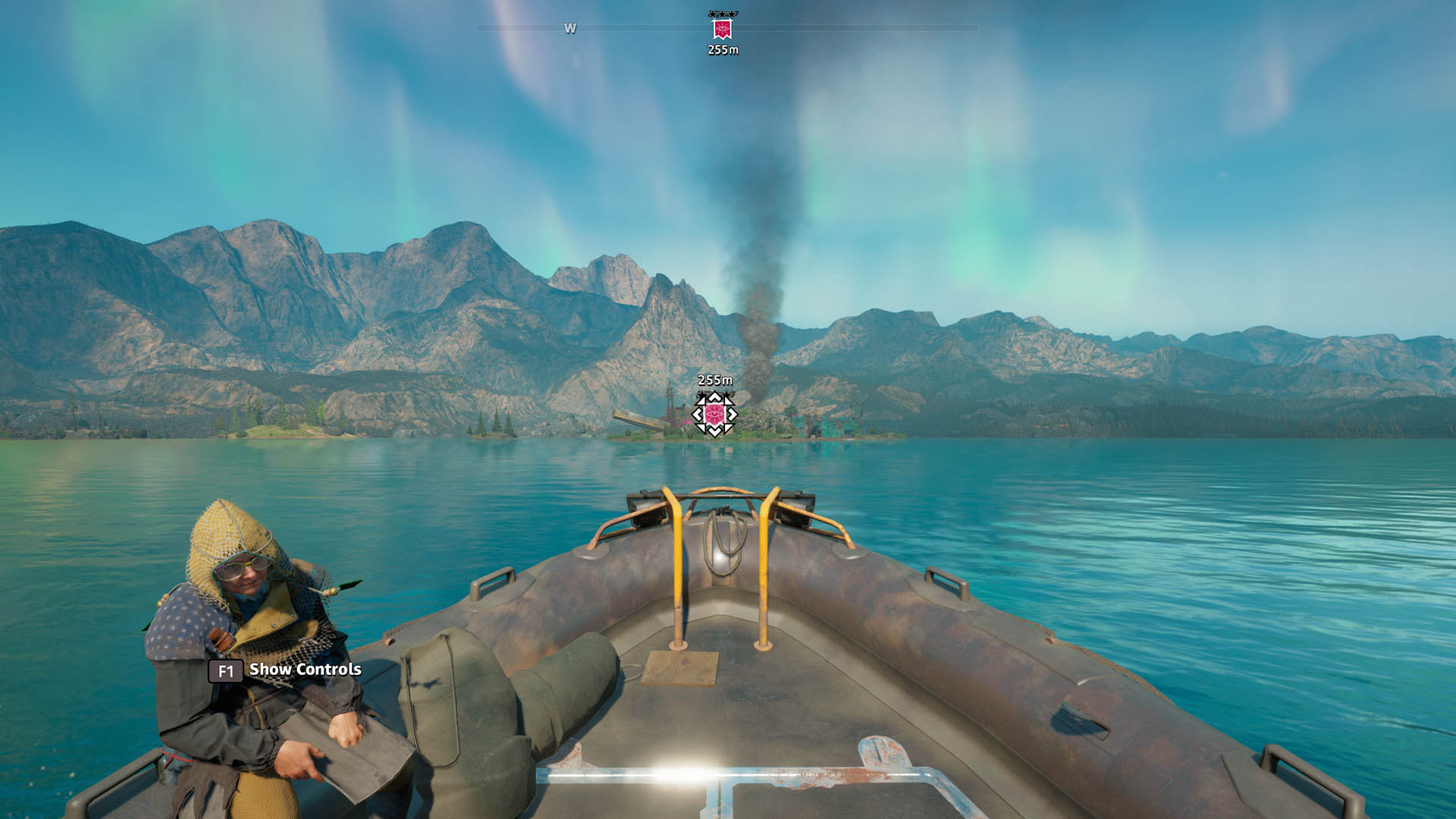 The game uses a four-level system for equipment and enemies. You start with access to level one stuff, progressing through to level three and then elite gear. Everything from vehicles to medi-pack efficiency relies on players upgrading the facilities in the Prosperity hub. Upgrading facilities requires ethanol, which is controlled by the highwaymen. Hijacking tankers and liberating fortresses grant players with the ethanol needed to progress though the increasingly difficult story missions. It’s no good going into a level three mission with level two weapons, unless you enjoy shooting bullet-sponge enemies.

Each time a fortress is liberated, players have the opportunity to salvage it for a bit more ethanol. The fortress will then be re-occupied by Highwaymen of a higher level. Not only are the enemies harder, but there are more alarms to disable, so players are going to need to be even more stealthy. All the fortresses can be liberated up to three times, each time getting harder but rewarding more ethanol.

The level mechanic and the need for ethanol makes for a tighter and more curated game experience. New Dawn is a smaller-scale game than Far Cry 5, but I found myself undertaking more of the content as I went, rather than steaming through the main story and mopping up afterwards. This is because just relying on perks (which you gain this time round aswell), isn’t going to get you through the game.

About those perks, as before, there are hideaways dotted around the map filled with salvage, Far Cry Credits (more on that, below) and magazines each worth one perk point. Called “pepper stashes” in Far Cry 5, they are known as treasure hunts. 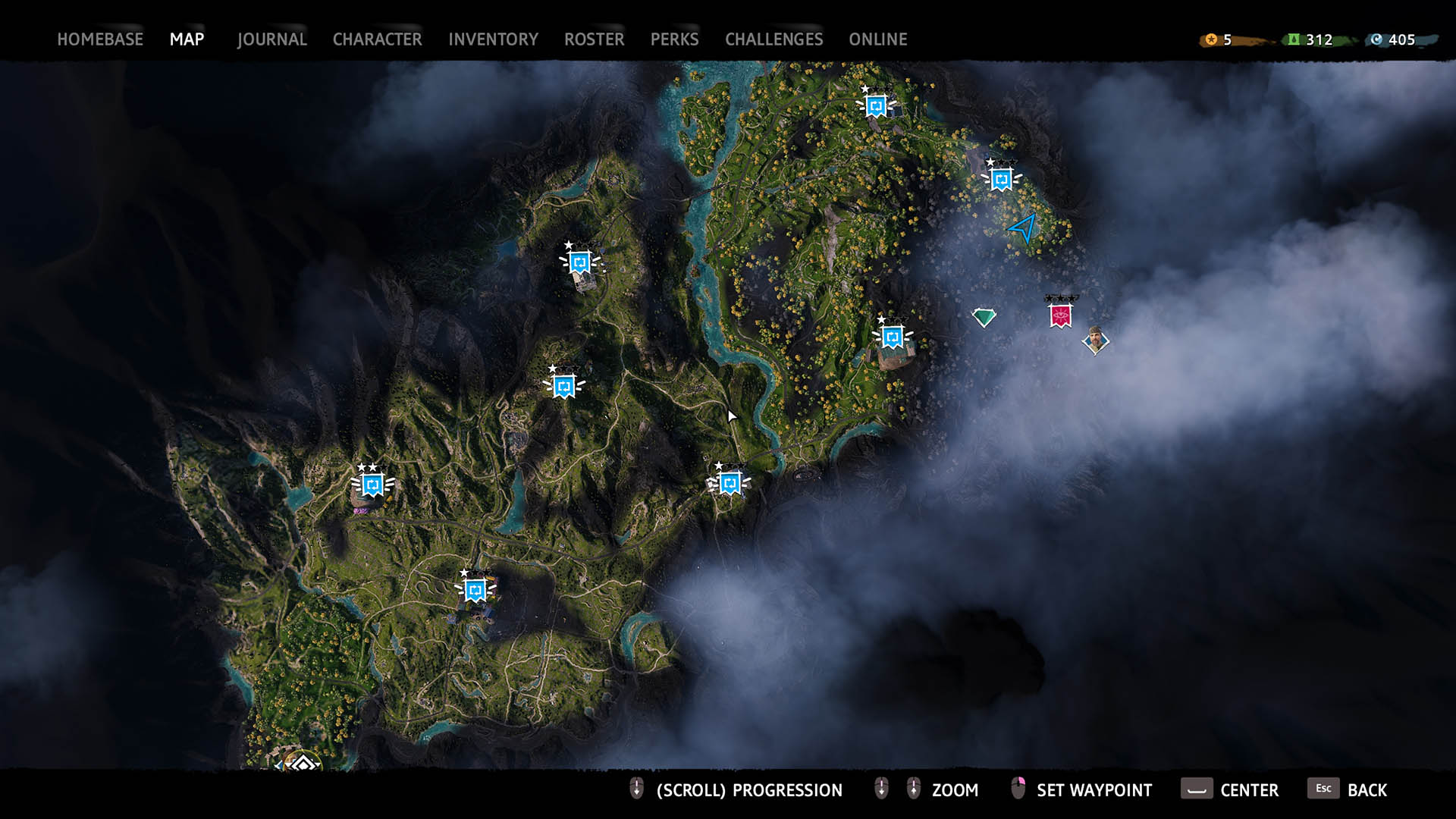 The game does have a pay-to-win aspect that you can safely ignore. You can spend real money to buy the in-game currency, Far Cry Credits, which you can then use to buy crafting packs. Not once did I feel the need to pay real money in the game. Unless you are so lazy that you can’t be bothered to actually find salvage for crafting (in which case why bother playing the game). I have no idea why the developers bothered to taint the game in this manner.

If you want better weapons you need to upgrade the weapons facilities, same with vehicles, medicine, explosives, cartography and even training for your sidekicks. Yep, as with Far Cry 5, you can have someone along for the ride to help you out in the field, from an all ground up baby Carmina to a geriatric sniper, as well as a few familiar faces, you are not alone in Hope County.

As with Far Cry 5, New Dawn can be played co-op, bringing a friend along for the fun. New to this game are expeditions. These missions take players out of Hope County to other locations in the US. Players must locate GPS-tracked packages from within Highwaymen strongholds and escape to the extraction point. Successful missions are rewarded with salvage and perk points.

Far Cry New Dawn may recycle a fair bit from Far Cry 5, but it’s very much its own game, rather than just more of the same. It’s smaller scale perhaps necessitates tighter gameplay, but the knock-on effect is a game that’s a lot less overwhelming than the usual Ubisoft action / adventure game (I’m looking at you as well, Assassin’s Creed, as gorgeous as you are).

Despite only just coming off Far Cry 5, I really enjoyed Far Cry New Dawn. In some ways, I enjoyed it even more with it’s more structured gameplay. It would be good to see some of these new game mechanics in the next chapter of the Far Cry franchise.