Dragon Quest Heroes: The World Tree’s Woe and the Blight Below Review 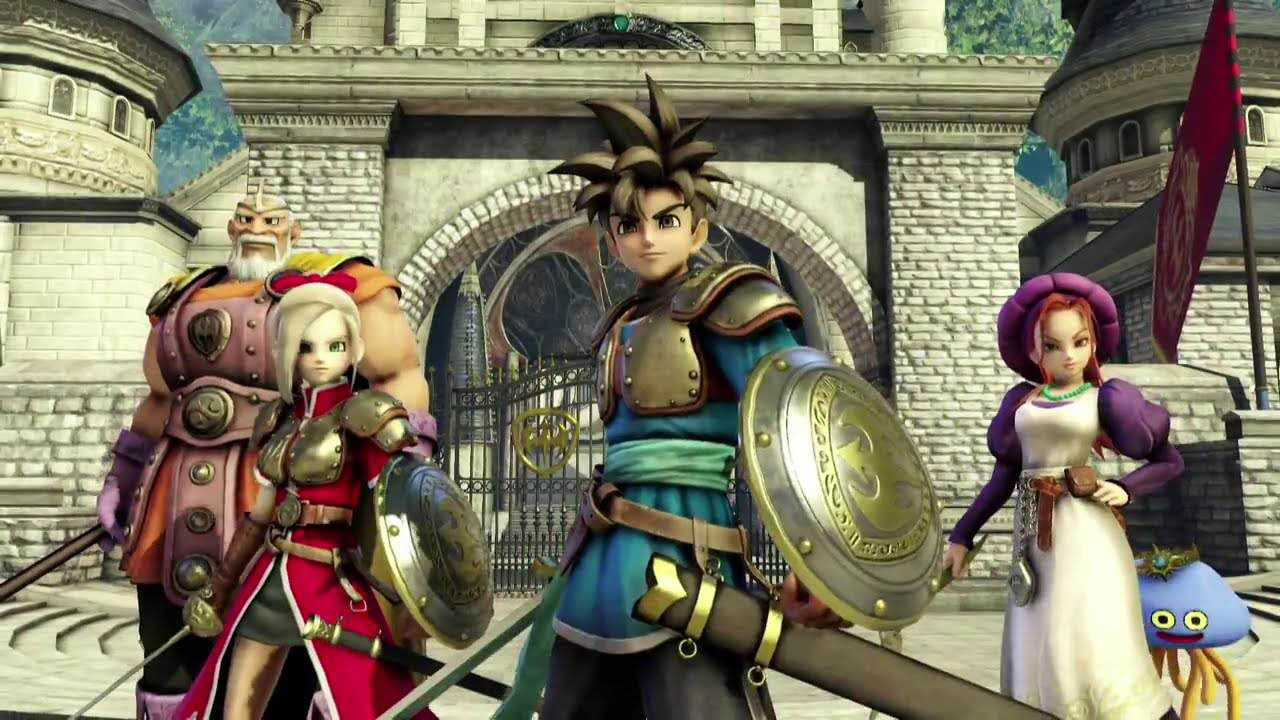 Dynasty Warriors meets Dragon Quest in Dragon Quest Heroes: The World Tree’s Woe and the Blight Below. This hack and slash game with tower defence elements by Omega Force combines many great elements from both games into what is an enjoyable experience that doesn’t quite live up to its great potential.

The story takes place in the kingdom of Arba, a place where monsters and humans coexist as friends. A mysterious man releases a strange dark force that corrupts the monsters turning them against the humans.

Two members of the king’s guard, Aurora and Luceus, set out on a quest to save the kingdom. You can choose to play from the view point of either of these two heroes however regardless of who you choose the other tags along as well.As you progress along your journey you encounter several other interesting characters who join you on your quest.Minus the introductory section, the story in the first few hours of the game are very slow to the point of dis-interesting. 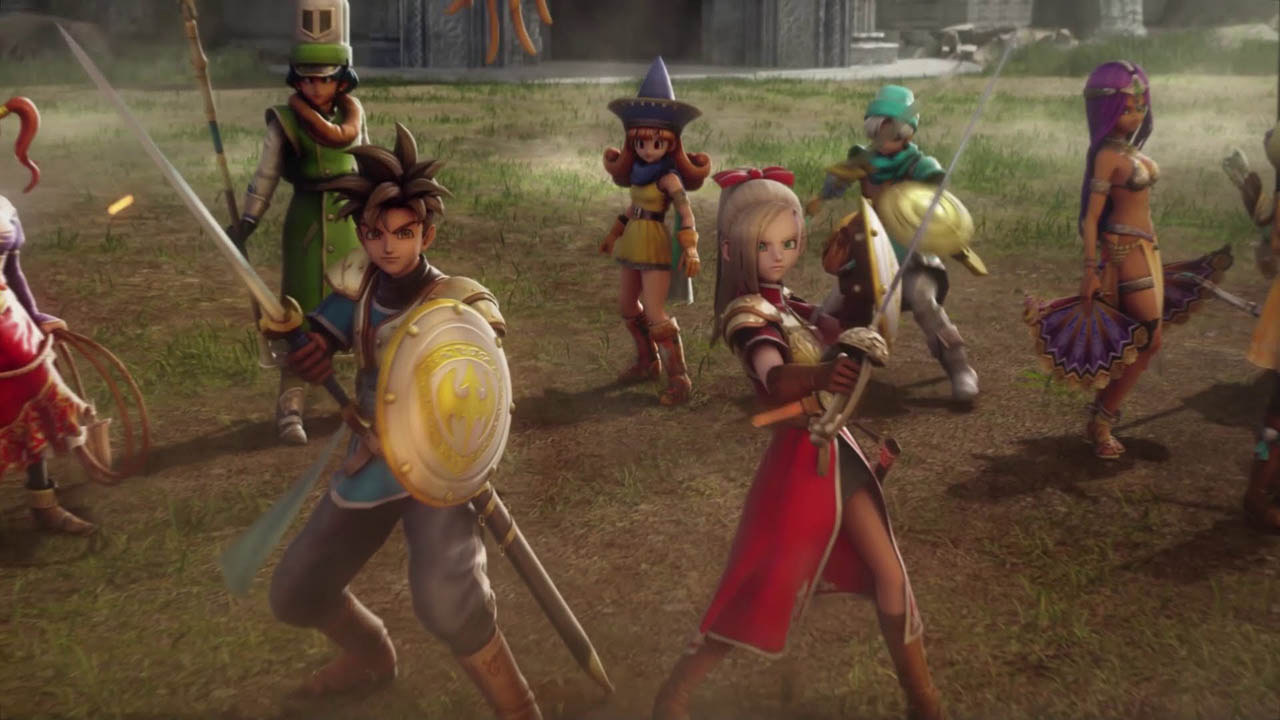 The personalities of all the characters you meet are well-defined and fun, but extraordinarily simple.

For instance, Luceus is the strategist and as such always talks about coming up with a strategy and almost nothing else. This plays into the fun for all ages approach the game takes, which plays out from everything from the combat style to the monsters themselves. Those looking for some maturity in the story or the characters though may not find what they are looking for here.

Combat in the game is excellent, feeling like a much improved version of the hack and slash style in the Dynasty Warriors series the developer is known for. In addition to just swinging your sword, boomerang, whip or whatever weapon your character decides to use, each character has at their disposal four unique magic attacks.While there is certainly button mashing elements, there is a surprising degree of strategy required in using the right attacks at the correct moment. 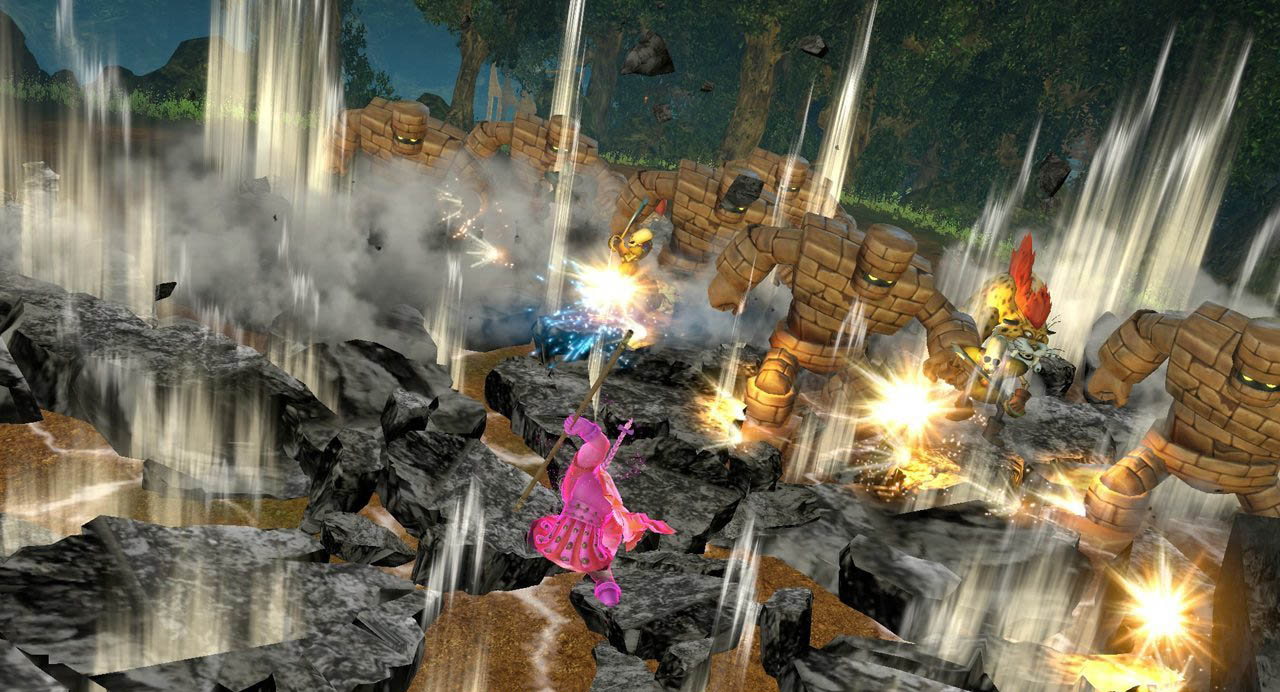 You are able to bring with you up to four party members at a time. Once in a Level you can freely jump between characters. Unfortunately, though, you can’t issue any orders to your party members and instead they follow you around like a lost puppy. This plays against the tower defence styled gameplay, which I will get into later, where you don’t necessarily want or need your characters with you.

Characters gain skill points to spend when leveled up. Initially there are a few useful skills that can be purchased adding extra attacks to your character. Once you unlock these though, all that is left is skills that boost your characters’ stats which provide less exciting benefits that are harder to notice.

Everything from the wide variety of monsters to the stunning environments takes on a cartoony Japanese style that just looks gorgeous. The uplifting orchestral-style music in Dragon Quest Heroes is up there with the best I’ve heard in a video game. 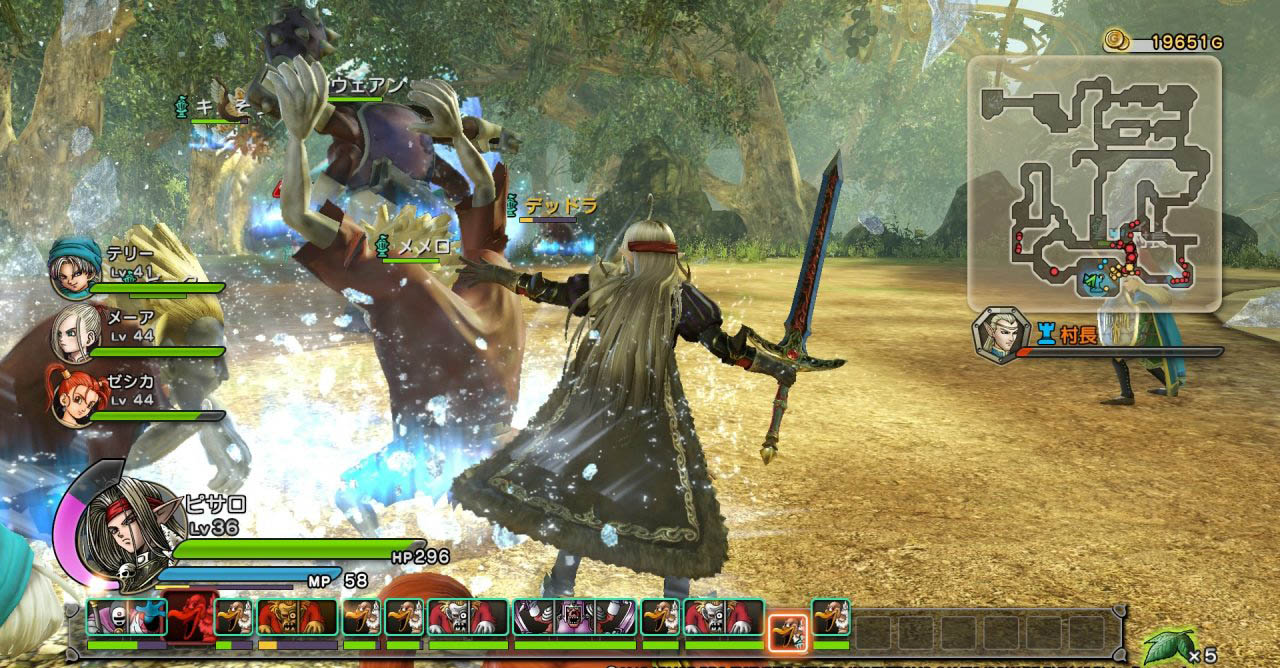 Initially, the combination of the superb combat, introduction sequence as well as character design left me very excited to experience more of what I expected to be a Dynasty Warriors-eque hack and slash adventure. I was soon left disappointed as the game settled into a very different direction to what I expected.

The game is split up into a plethora of very small sized Levels. Your objective in each Level is to either defend something or kill all monsters. Every few Levels a boss battle is thrown in to mix things up.

Killing all monsters proves to be a tedious, an ultimately unexciting affair. It is when you are required to defend a certain objective that the game hits its stride.

One of the neat gameplay mechanics that fits well into these defence missions is the ability to summon monsters. As you kill monsters, they occasionally drop coins. If you have enough free slots, you can then pick up these coins and use them as you see fit. 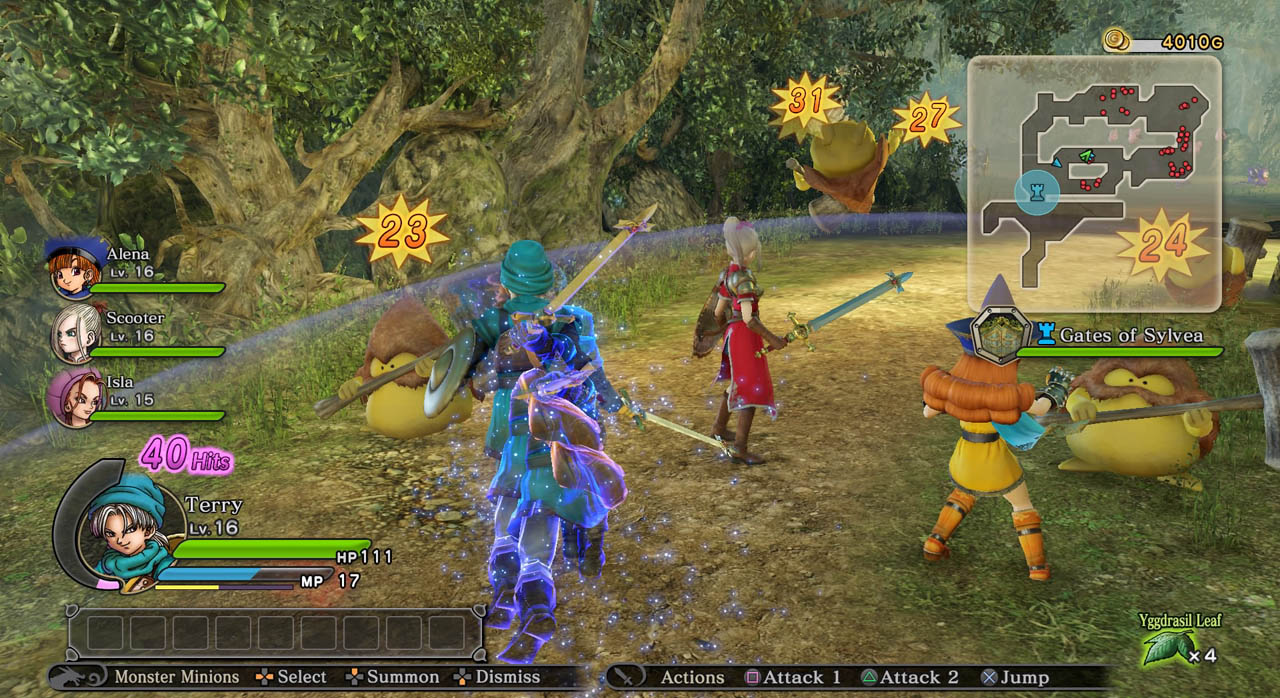 The monster coins are classified as either sentry or savior. The former acts as a turret to defend an area and the latter uses a one off ability or attack of the monster. These defence missions act as a tower defence game of sorts which actually is quite enjoyable in short bursts.

Everything does get very repetitive quickly though, especially after playing a few Levels with the same monsters, very similar environments with identical objectives. A few extra elements such as opening doors and teleporting crystals are added a bit later in the game but ultimately it isn’t enough.

Despite having several Levels take place in the same area or city, they are very awkwardly split-up. Between each Level you are forcibly sent back to the airship where you can buy weapons, take on side quests, make items or do several other minor things. While such facilities are useful on occasions, the vast majority of times I found myself running straight back to the map and jumping into the next Level. 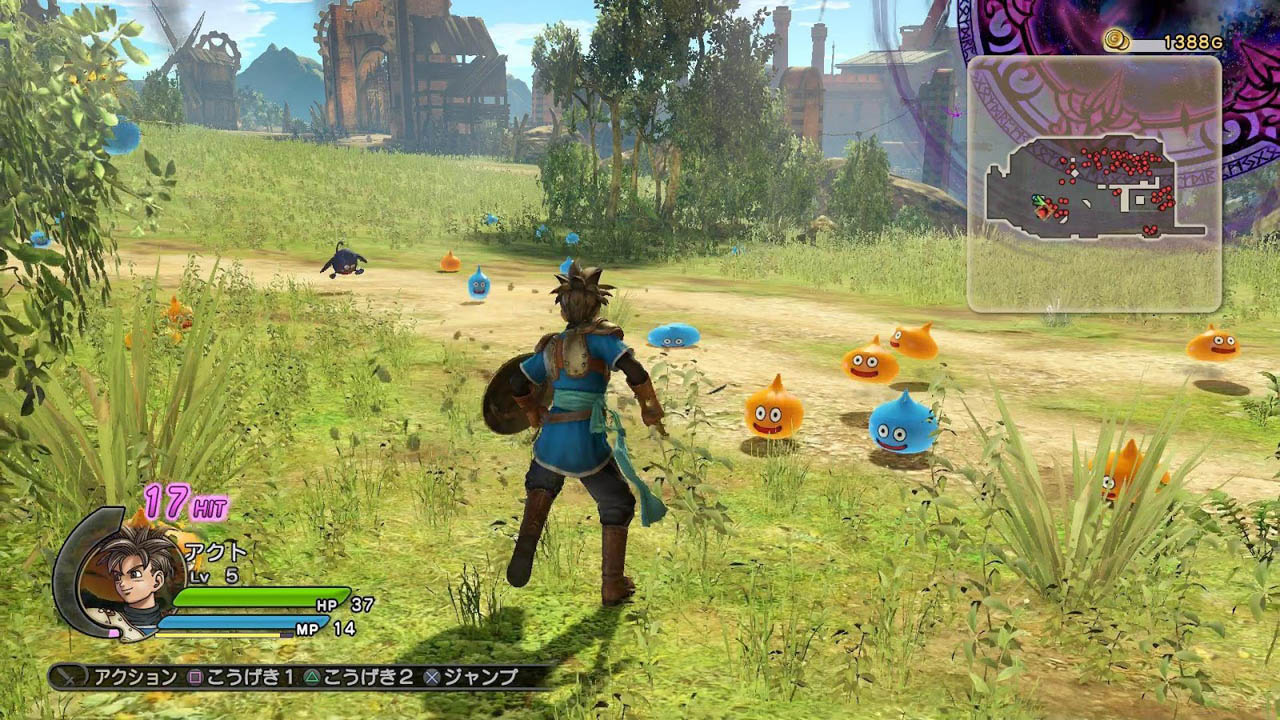 I found being forced back to the airship between missions broke up the pacing of the game. One minute you are deep underground in the middle of an urgent mission, the next you are back up in the airship like nothing important is happening.

The Levels and the story also feel very disjointed with the story progressing after and before levels take place not during. The lack of integration makes the levels seem quite boring at times.

Ultimately, Dragon Quest Heroes feels like it needed more of the series the developers are most famous for by providing larger but fewer Levels with objective stringed together and story progressing during missions. 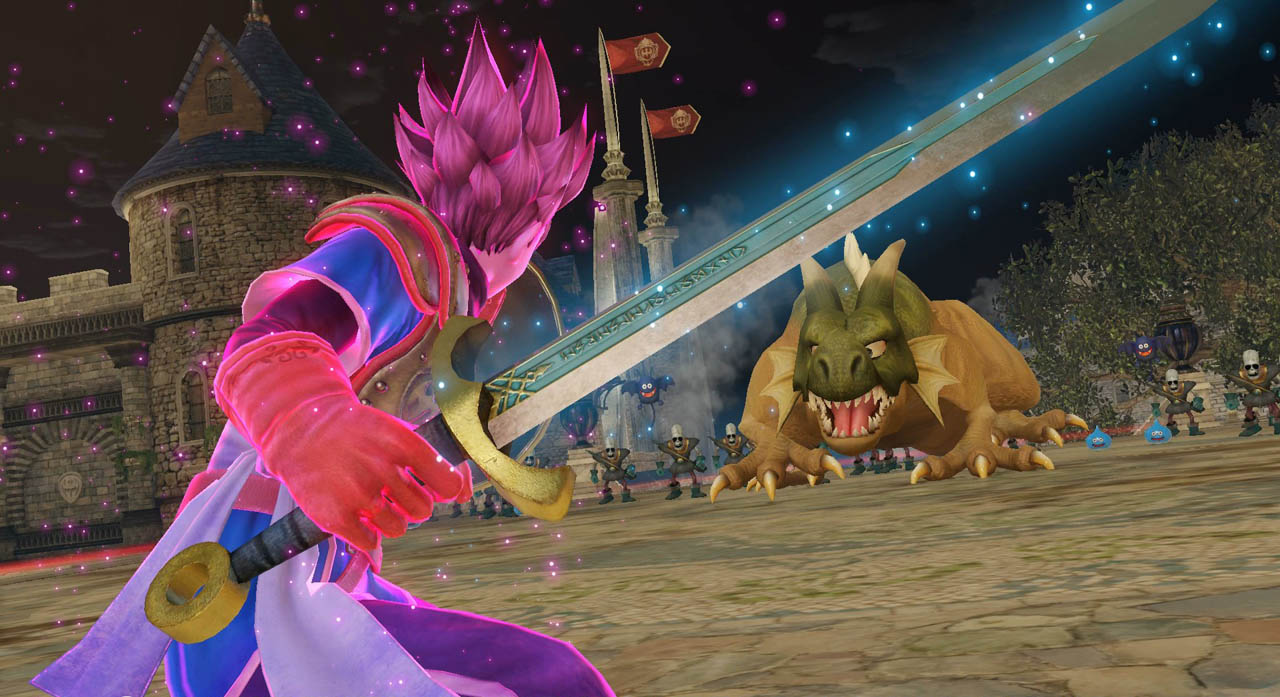 Dragon Quest Heroes: The World Tree’s Woe and the Blight Below had the potential to be one of my favourite games of the year. Between the gorgeous visuals, superb hack and slash combat and fun characters, there is a lot that I loved about the game.

The tower defence elements provide an interesting twist to the gameplay. The way the game is structured though is ultimately where Dragon Quest Heroes falls short.