At Xbox they are inspired by gamers, being at the core of everything that they do. So, today, they are excited to announce a new choice they are bringing to gamers – the Xbox One S All-Digital Edition.

Consumer appetite for digital content and experiences are stronger today than ever before. Gaming and technology have changed quite a bit since the first Xbox debuted in 2001. During this time, they’ve seen a digital transformation across gaming, music, TV and movies. And closer to home, the success of Xbox Game Pass, which gives members access to over 100 great games, is just another example of how consumers today have grown to expect great digital content. The Xbox One S All-Digital Edition was created for those who prefer to find and play their games digitally and are looking for the most affordable way to play Xbox games. 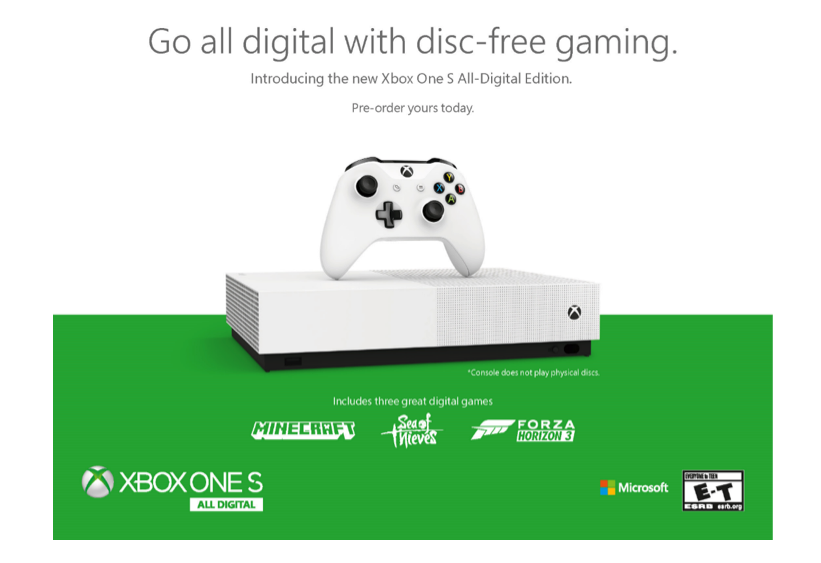 The Xbox One S All-Digital Edition comes bundled with three of the most compelling and popular games – Minecraft, Forza Horizon 3 and Sea of Thieves. These critically acclaimed titles are sure to offer something for everyone in the family to enjoy.

Those new players joining Xbox can get a head start on their digital collections and discover their next favorite game through Xbox Game Pass. If you haven’t tried Xbox Game Pass yet, the Xbox One S All-Digital Edition comes with a special offer to get started with access to over 100 great games, and with new games being added all the time there will always be something new to queue in your digital library. Cord cutters will enjoy watching 4K HDR entertainment with Netflix, Amazon and more, and thousands of Xbox One games are available from the Microsoft Store digitally.

The Xbox One S All-Digital Edition will be available at select retailers worldwide beginning May 7th, 2019, arriving in New Zealand later this year. More details on local availability and pricing in the coming weeks.