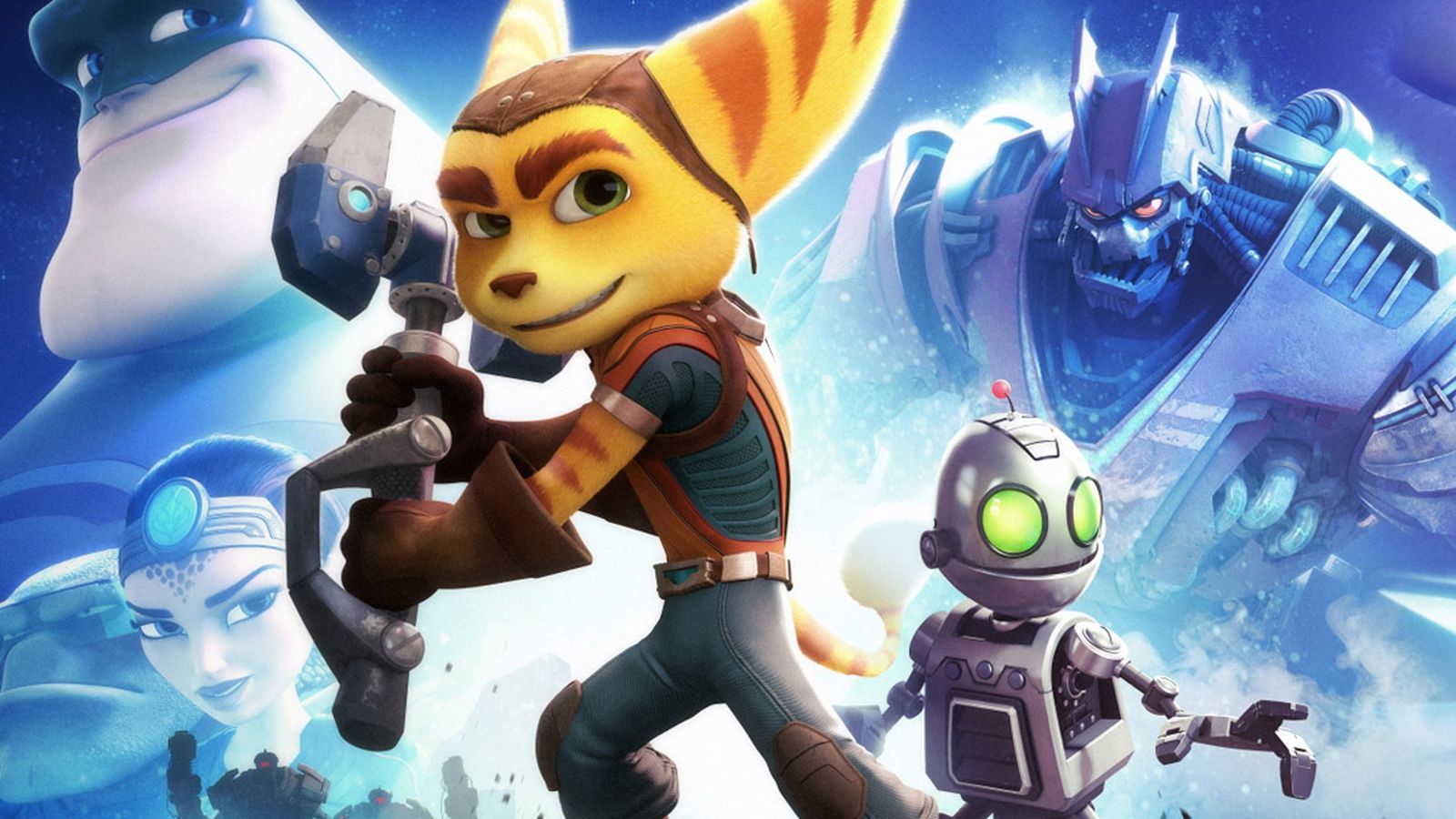 Back when gaming magazines with bonus demo discs were still a thing and PlayStation 2’s still ruled the Earth, I found myself addicted to a charming and vibrant game, Ratchet & Clank. This delightful duo had me from the start back in 2002. As time has gone by, many sequels, spin offs and two console generations later here we are again. Ratchet & Clank returns to debut with both a movie and re-imagining on the PlayStation 4.

Insomniac Games have always captured my attention with their quirky sense of humour. They bring a certain level of silliness to create wackily fun games. The memorable platform shooter games that is the Ratchet & Clank series is back but have they stayed true to its form and can they capture the same magic that caused many hours of me and my siblings fighting over who’s turn it was to play. 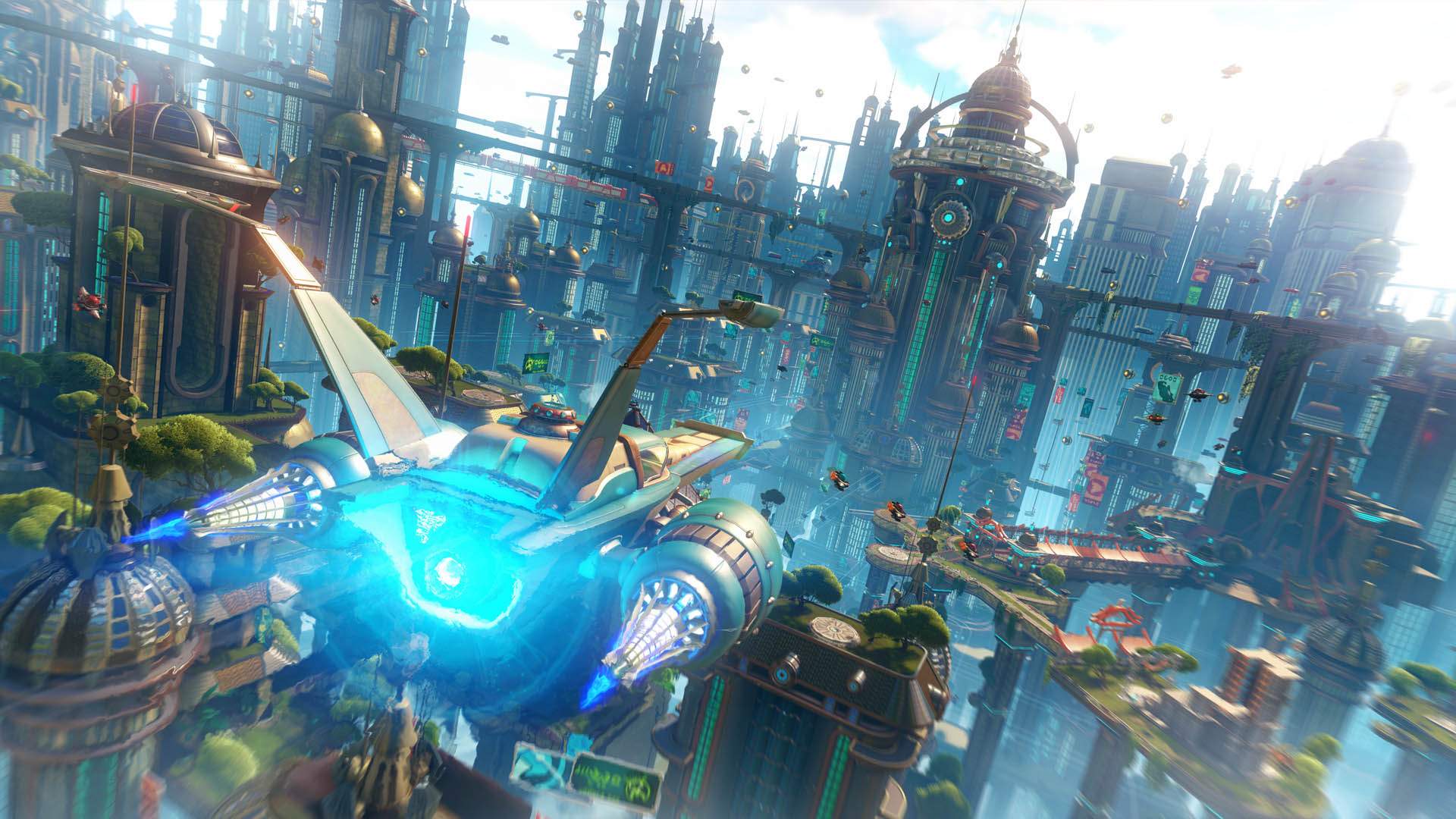 As a re-imaging one question is what has changed? The story has been re-invented. Though events still mostly follow the original they certainly branch out from the first towards the end. The Galactic Rangers, led by Captain Qwark, help keep safe the citizens or the Solana Galaxy. Ratchet, a lone Lombax mechanic, dreams of becoming one of them. On another planet near by a small defected warbot escapes his factory only to crash land, where else but planet Veldin. Though, unlikely heroes and an even more unlikely pair, the two join up to save the galaxy.

The new story incorporates a couple of new characters and also features the insane Dr. Nefarious known from Ratchet & Clank 3: Up Your Arsenal. Sadly, none of the new characters have much of a personality and I feel, apart from helping aspects of the new story make sense, are generally superfluous.

Many characters have been introduced throughout the series and I have to say Insomniac usually does a fantastic job of making them entertaining and memorable. From Angela the clumsy Lombax to the Sasha the Captain of the Starship Phoenix, they all had something to add to the game. These new characters however don’t do much for the game at all. Many classic one time characters have also been left out, the same odd characters that added to the overall charm of the original.

Ratchet & Clank always bring new and interesting weapons for us to play with. The latest entry doesn’t actually bring too many new weapons but rather includes many popular weapons from the series. From the Groovitron to, my personal favourite for this game, the Lava Gun, as flamethrowers just don’t get old. Like the later entries, this title keeps the level-up weapon mechanic and it is well tweaked to create a user friendly and addicting upgrade system.  Most weapons are fun to use and have moments that they are perfect for. The main weapon a Ratchet & Clank game can’t be without is the all-powerful R.Y.N.O. This ultimate gun is back and being the games strongest weapon, once acquiring, is certainly a lot of fun. 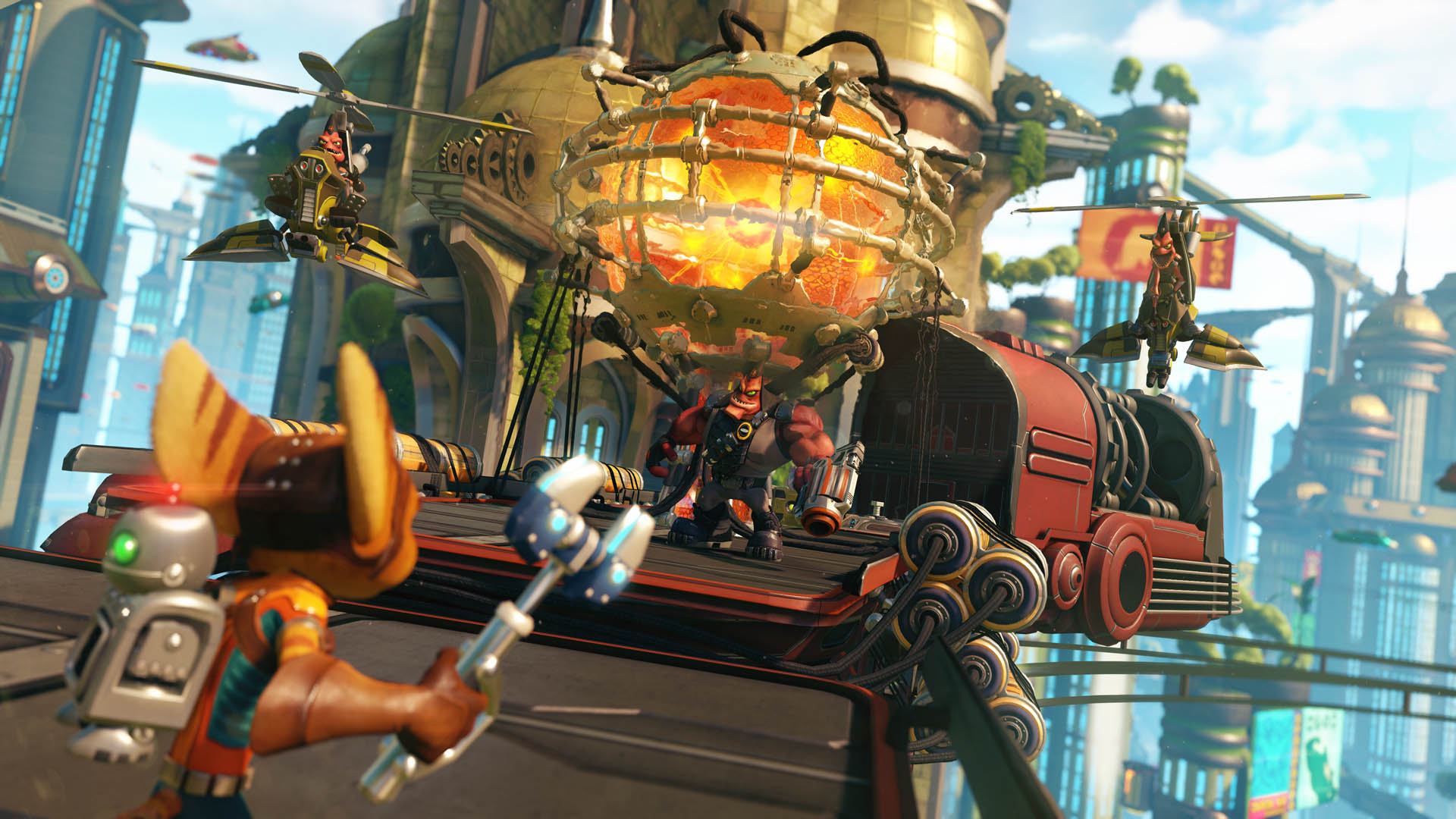 A completely new trait to the series is card collecting. These are hidden within Levels and occasionally are dropped by enemies. Once a certain set is complete a small bonus is unlocked. Omega weapons only become available for purchase in Challenge mode, but only once the set has been completed for that weapon it is unlocked for purchase. This wasn’t particularly exciting and the only card set I was motivated to complete was the R.Y.N.O. one.

The game has been streamlined. Many gadgets that were unlocked later in the original game have been provided from the beginning. Things like the swing shot and an upgrade for Clank to make swimming under water much faster are already equipped. This took away some of the frustration of certain parts but also that satisfaction of obtaining these neat new gadgets. 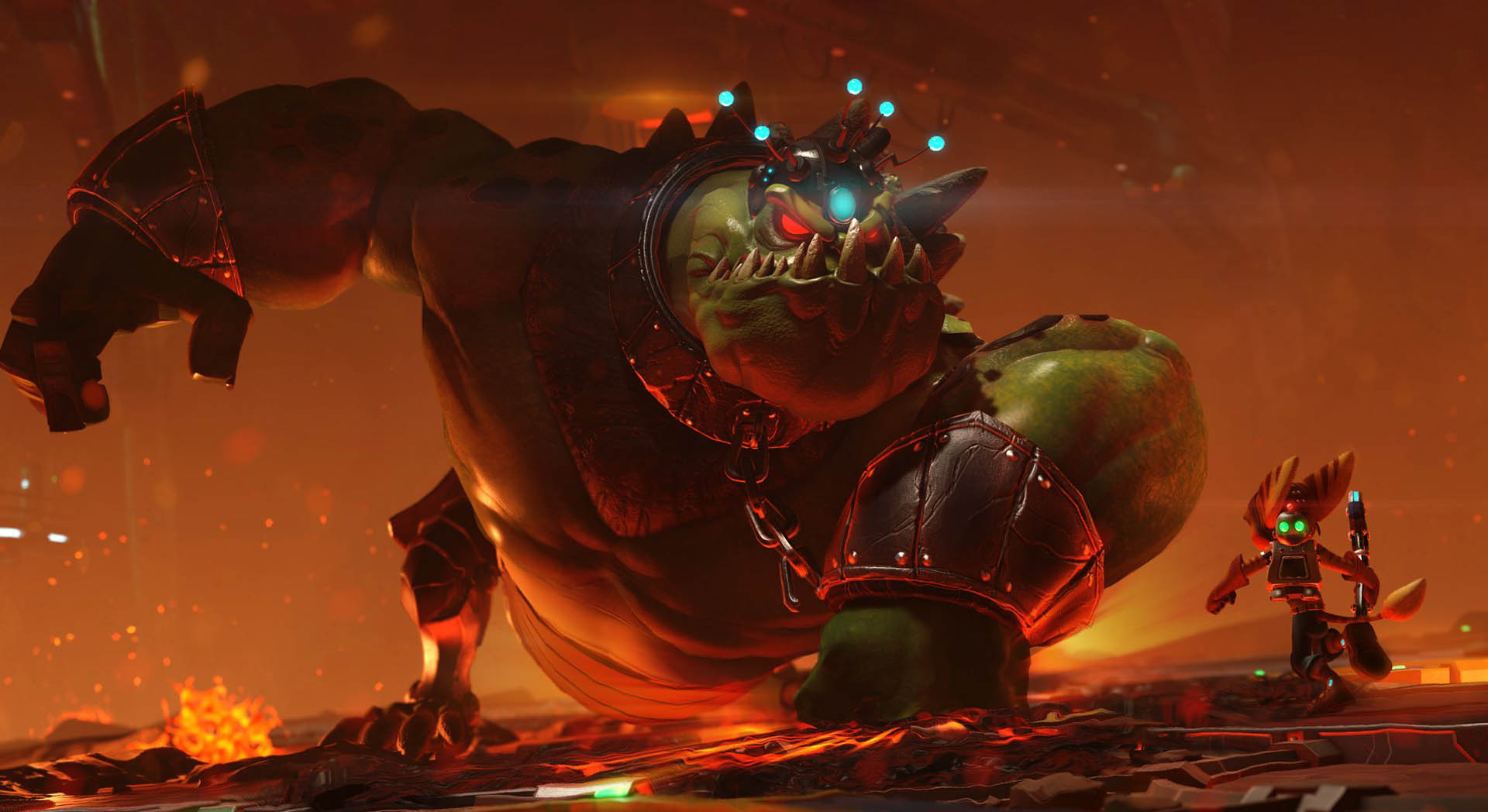 The sound, though new, is well done and adds atmosphere to the game. There are some iconic music pieces that are absent from this re-imaging, which I find rather disappointing. The old sound track was fantastic, that’s not to say the new one isn’t, it just misses some of the mood setting that the first encompassed.

Many classic Levels make the reboot but not all of them. I did miss playing some of my favourite maps but then it is also nice to play new ones. I did enjoy exploring Levels brought back to life with a new degree of graphics and detail and they all look great. I love that Levels, while sticking true in many aspects to the original, offer new and interesting features as well. The game really takes something old, adds something new and then borrows bits and pieces from the rest of the series to give us a beautiful game. 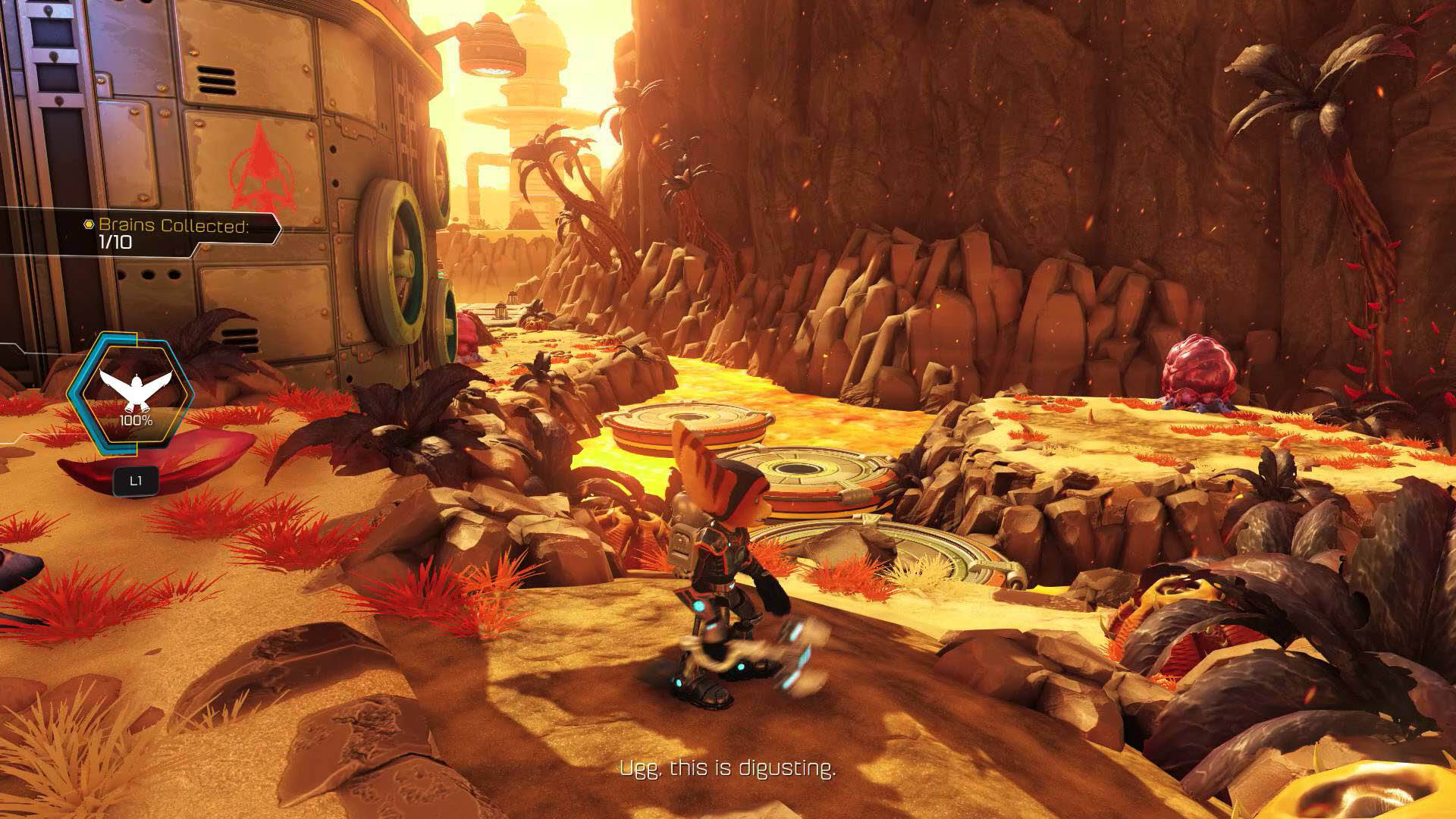 One thing I do miss is the in-game skill point system.

These had you either breaking things or doing something odd just to unlock that skill point. I loved this system and found it really kept me playing the game and exploring and simply doing all sorts of things just get that little tag up on screen. Well, now, it’s gone.

The one big thing I feel has changed for the worse is the tone. Ratchet and Clank themselves have lost some of their original personality. The whole game seems to take a more serious tone. It is a wonderful and well-made game, but sadly it just doesn’t capture the same charm and spirit the original game displayed. Maybe the new generation will find this appealing but I miss the quirky and cheeky sense of humour the series is known for. 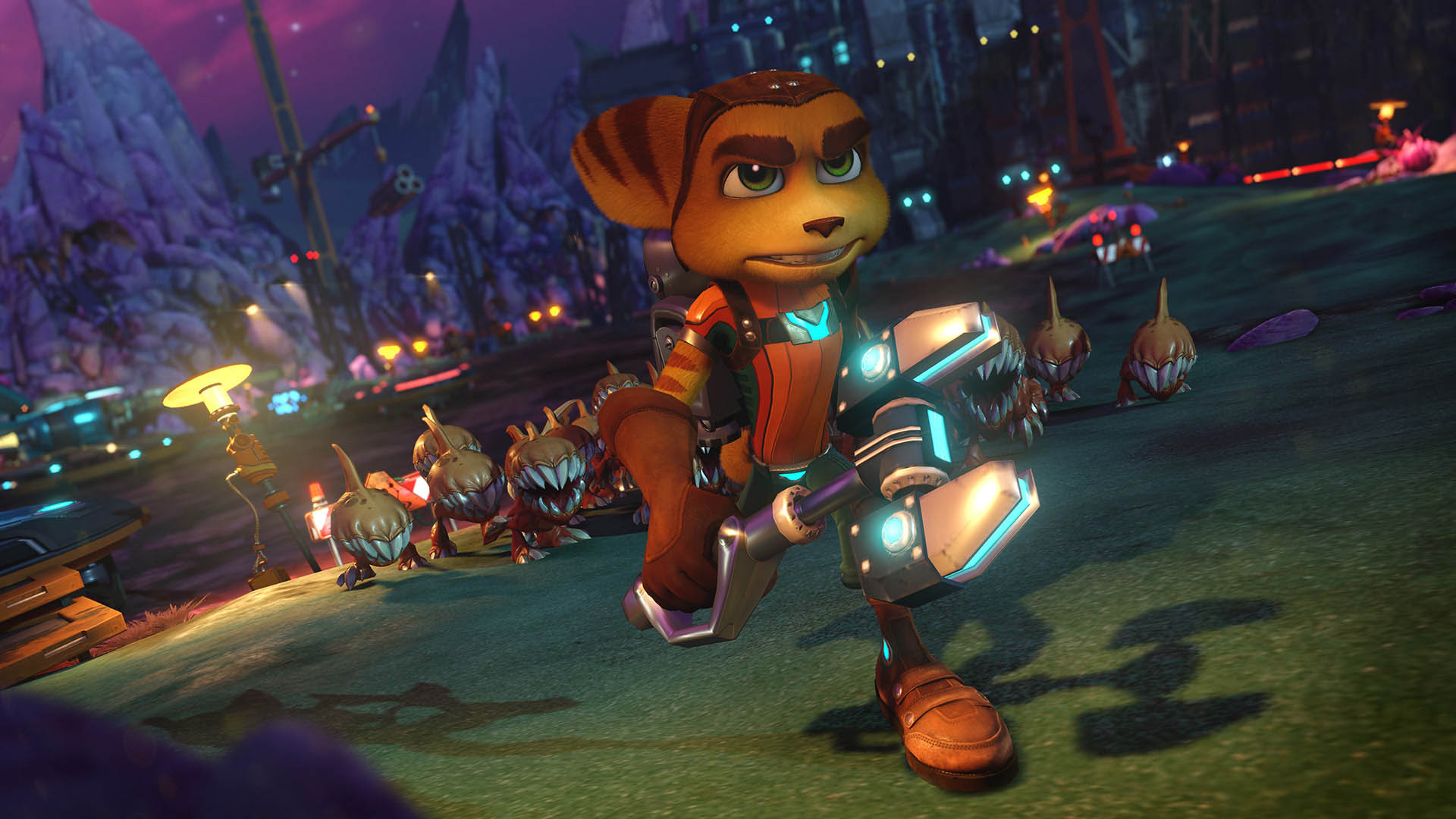 Ratchet & Clank (2002) did so much right to the point that not all of it needed a re-imagining. Modern gameplay mechanics such as weapon upgrades and the ability to strafe are much welcome additions but the complete change in tone is one I am not happy to see.

After playing the re-imagining of Ratchet & Clank at E3 last year and not able to able to contain my excitement since, I do find myself disappointed. It isn’t exactly all I hoped for.

While the game itself is well created with enjoyable mechanics, weapons and environments, the original level of silliness and whacky themes that was present for the majority of the series is just missing. The game brings bits and pieces from the entire series to offer a fresh but still nostalgic game to a new generation of console.

But Ratchet and Clank Remastered is just missing it’s soul.