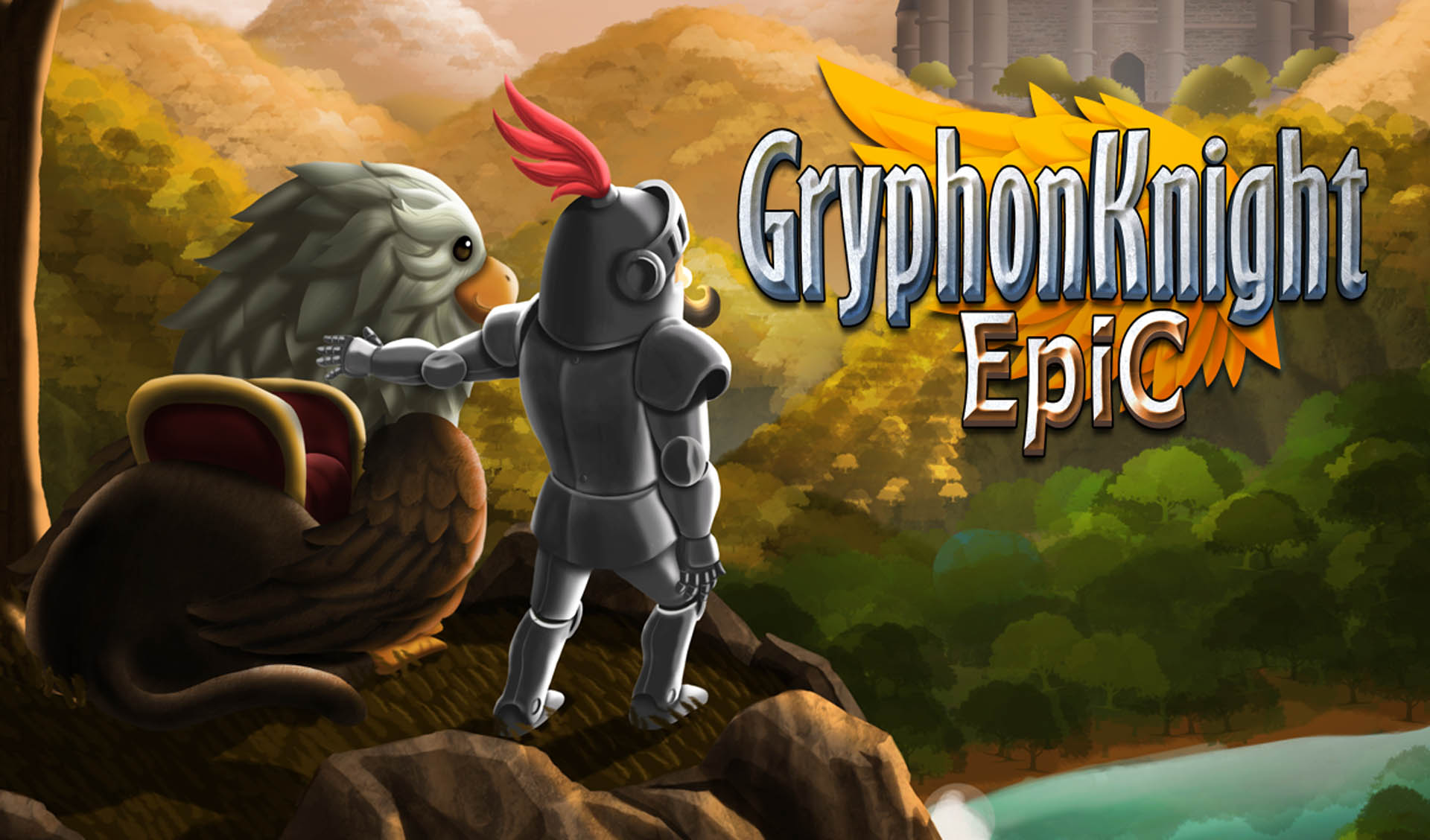 The first side scrolling adventure game I ever fell in love with was Castlevania: Symphony of the Night. Exploring the huge castle; upgrading my many abilities, finding the countless secret chambers,  and having a fairly unforgiving learning curve all came together to make a classic experience which is still enjoyable today.

There has been resurgence of such games in the previous couple of years, driven by the sudden economic viability of the indie sphere due in large part to systems like Steam Green Light and Kick Starter. Rogue Legacy and Shovel Knight both took this formula and used it to great effect, and now Cyber Rhino Studios has entered the field of low budget nostalgia driven games, with Gryphon Knight Epic. 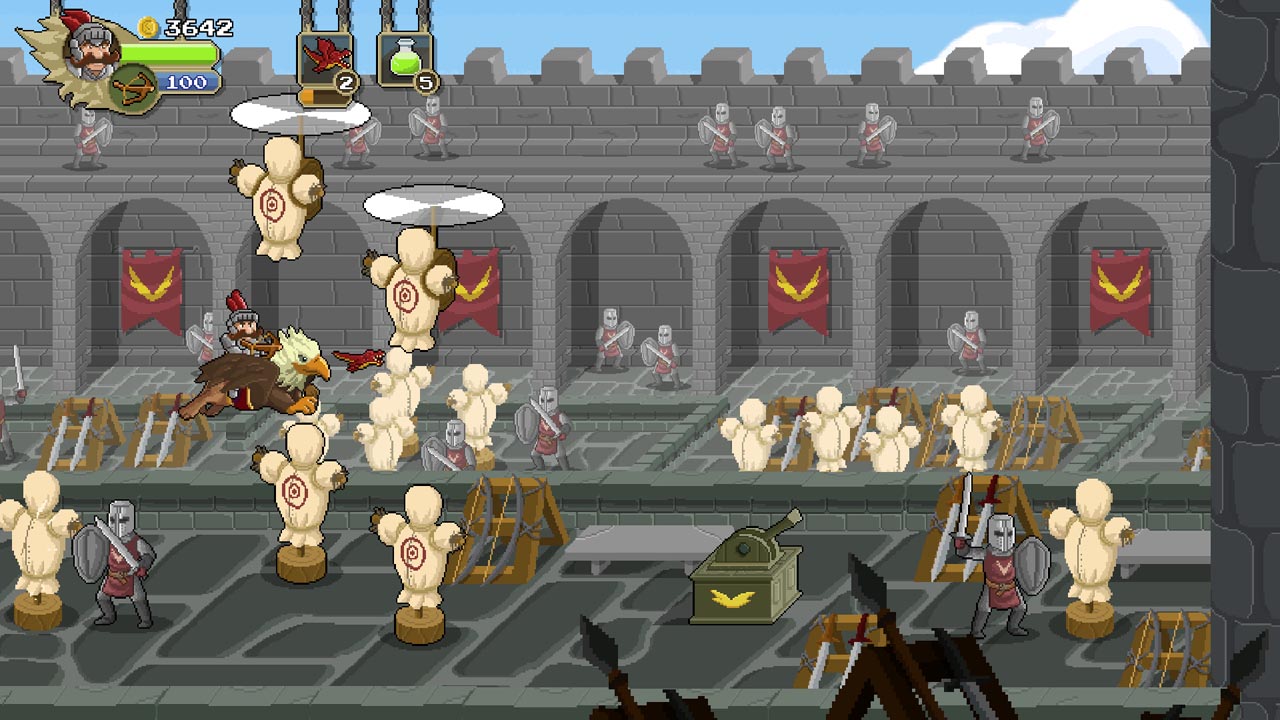 Gryphon Knight follows our Hero, Sir Oliver, coming out of retirement when a new danger threatens the Kingdom once more.

He sets out to track down his 7 old companions, each of them living in a separate area of the world, which make up the game’s Levels and stages. We are treated to a forgettable intro sequence in which the backstory of Sir Oliver and his party is established, involving a dragon, a princess and 7 different magical weapons claimed by Oliver’s companions.

The games writing is bizarre, not quite camp fantasy enough to be self-aware genre fun, but also often filled with enough limp attempts at meta-humour which make it feel like a spoof. There are many references which are so unsubtle that they’re less tips of the hat and more slaps to the face, e.g one of the bosses is an Ent named “Tree Stache”. You get the picture. 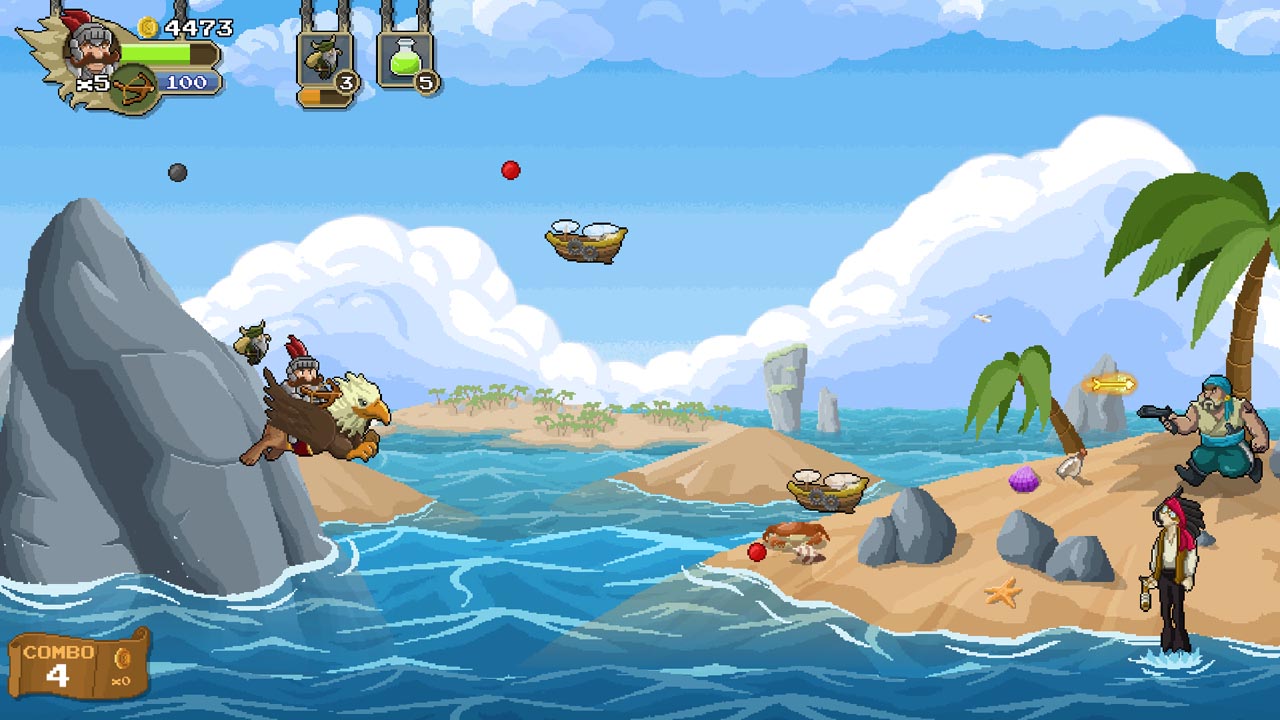 Graphically, the game is serviceable when played as a throwback to the classic era of gaming; however the garish colours and blocky textures are combined with tinny sound in way that more often than not, reminds us how far games have come instead of evoking any sense of nostalgia.

Gryphon Knight clearly wants to recapture a golden era of adventure games, and does so, but only on the very surface. It fails in the most critical task, ensuring that it stays fun. As you would expect, the basic mechanics are not hugely complicated, you have one main weapon and a collection of equippable “Squires”, which act as floating passive benefits around your character.

Enemies drop gold upon death, which can be used to purchase consumables and upgrades in-between stages. 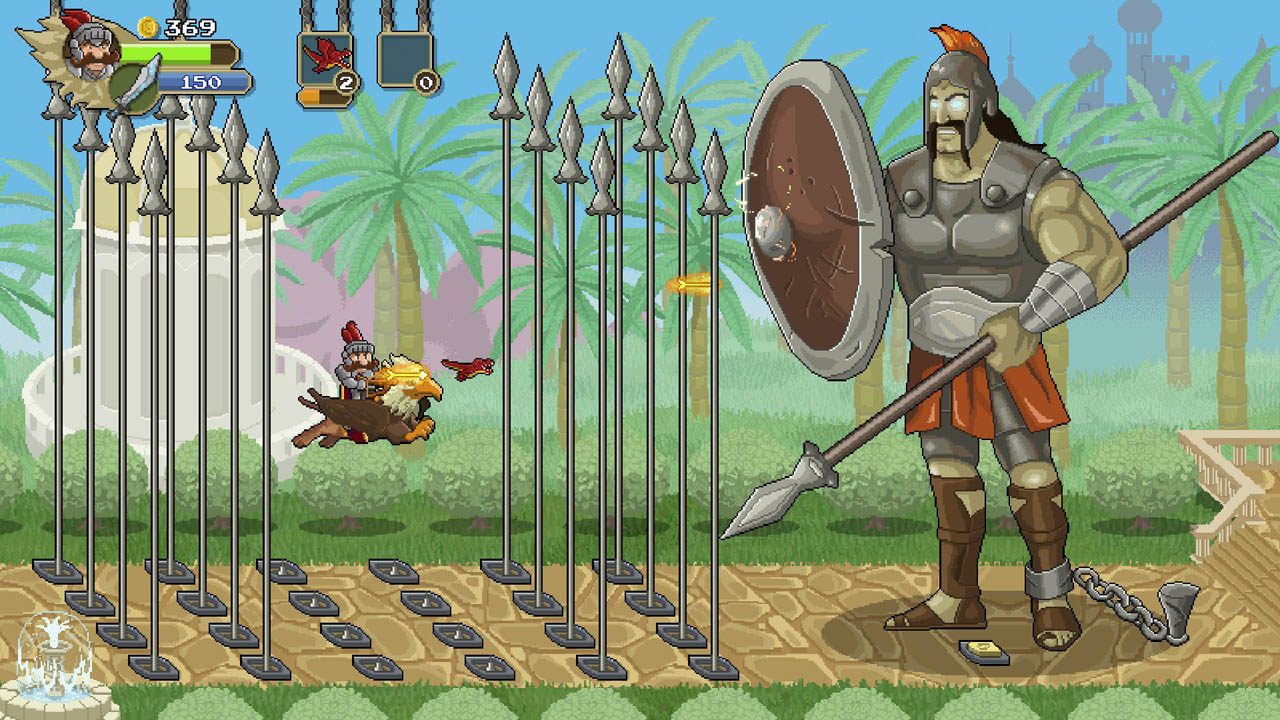 I enjoyed collecting and upgrading the various weapons initially, and to its credit, the developers definitely realised that having a well fleshed out weapon and upgrade system was crucial for the games long term fun. This was the aspect I enjoyed most, figuring out which of the collectible weapons suited my play style and upgrading accordingly.

However where the game lets itself down is in the basic motion through the world and how you interact with it. You fly through the 2 dimensional game world at a set pace, able to change direction but never stop moving entirely, which can grow very frustrating as you will often be attacked from both directions simultaneously and have to awkwardly shuffle controls in order to kill all foes without rapidly being overwhelmed. 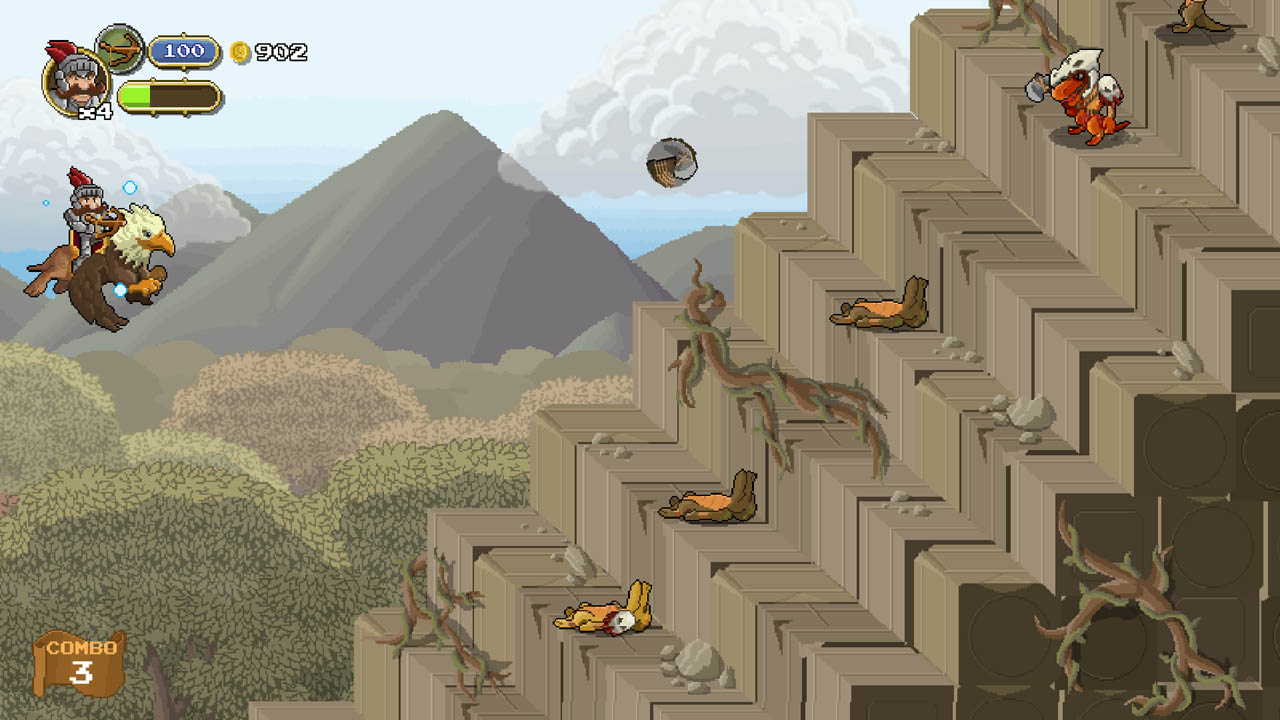 This is another major issue with the game; its difficulty settings are badly skewed to the point where even easy mode proves occasionally deeply frustrating.  While punishing games are very much in vogue right now, extreme difficulty is only enjoyable when the player truly feels a sense of accomplishment after surmounting the challenge, instead of being rewarded for dumb luck or mindless grinding.

In Gryphon Knight Epic, there is a bare minimum of skill involved in completing any particular stage, but there is certainly a lot of patience. At higher Levels, the frequency of death is exacerbated by the fact that you have a limited number of lives, so players will often end up replaying large sections of each Level. Of course, this wouldn’t be an issue if there were numerous secret paths and objects to hunt down in each Level; however the one secret ‘rune’ hidden in each stage is hardly worth the effort of tracking down.

Overall, Gryphon Knight Epic attempts to showcase the best of a bygone time in the industry which most of us will remember with fondness. However an unbalanced difficulty setting, rote combat and subpar writing combine to evoke frustration and only shallow enjoyment. Hard core fans of classic gaming may find something worthwhile here, but to the average player, this experience is not worth its price tag.