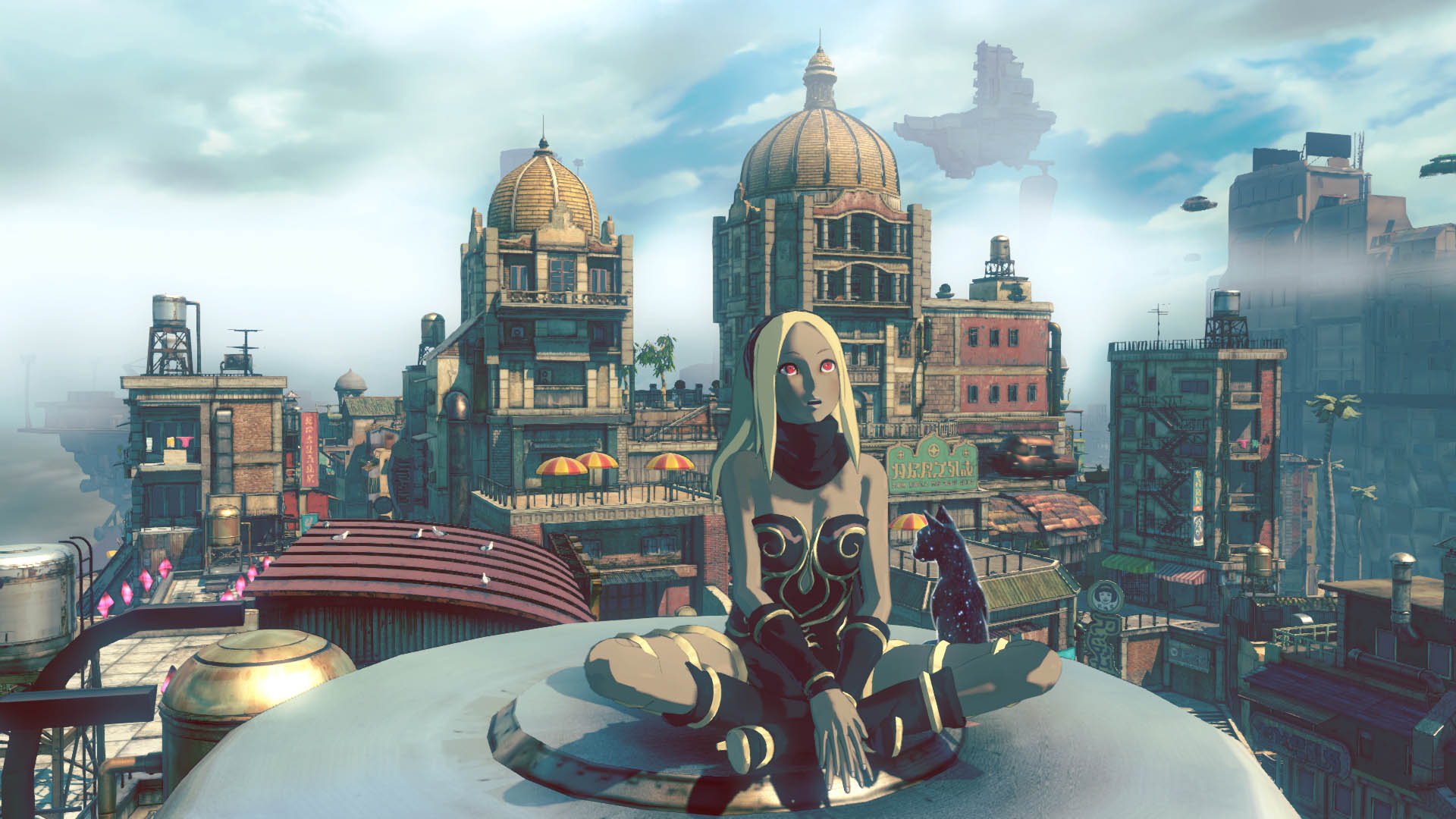 Falling is what, in some respects, games do best. From Breakout to Super Mario Bros. to fall-a-thon Tomb Raider, falling has always been the yang to jump’s ying. Yet falling has traditionally lacked the finesse, grace and control that the jump has enjoyed. There’s no “fall” button. Gravity Rush 2, however, turns this on its head – literally. Instead of flying towards something, you fall, controlling gravity to be whichever direction you desire.

That core mechanic drives everything in the game. Not only the story, but the characters, the universe and even the world design. Kat, your protagonist has somehow found herself in a world extremely amenable to one with such a gift as she possesses. Cities float on multi strata islands, connected by flying cars, bikes and of course your gravitational pull. 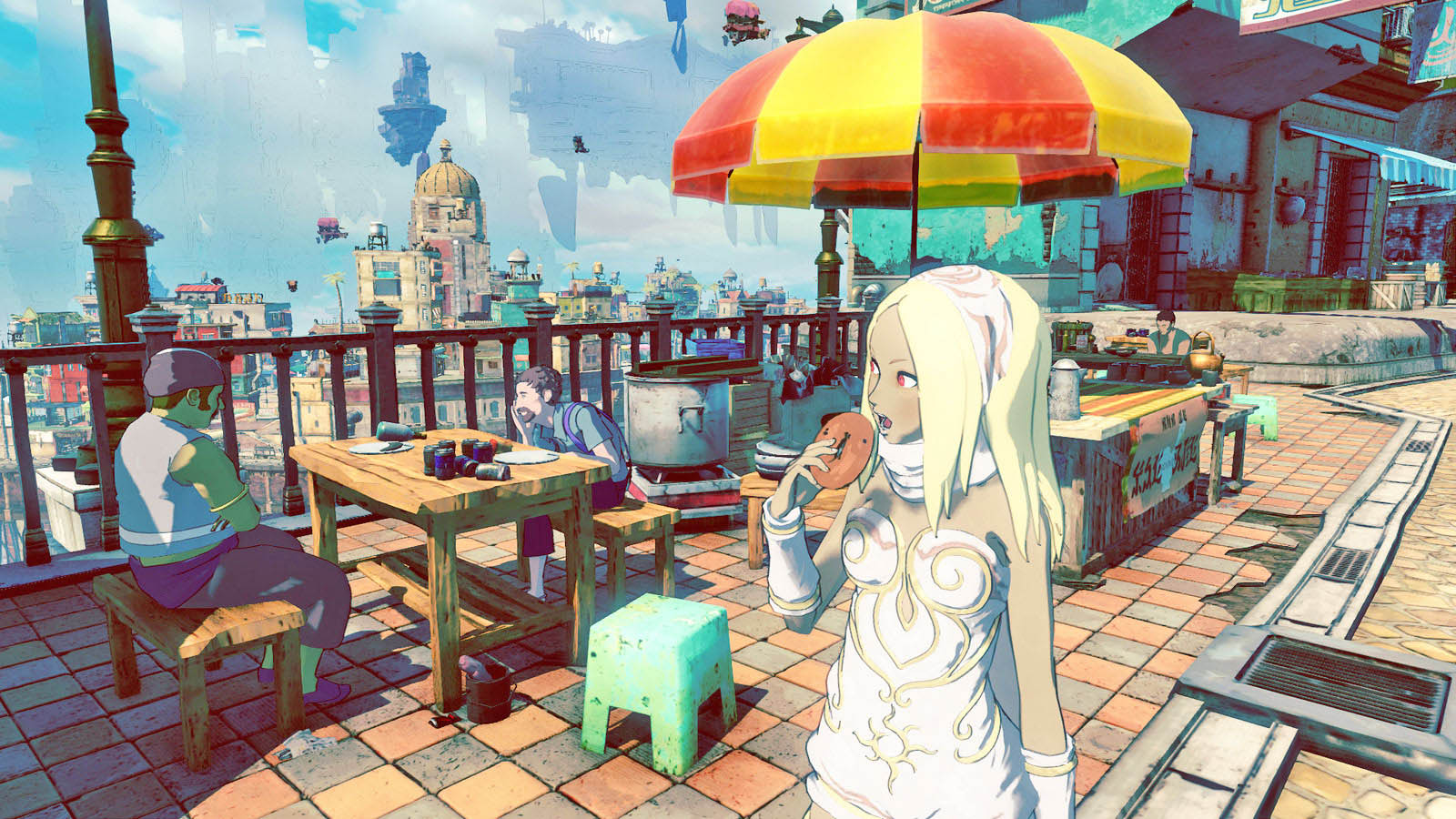 Gravity Rush 2 features a beautiful art direction, the cel shaded animation is gorgeous and the cutscenes, which typically take place in a manga-type format are also well drawn. As in the first game, everybody speaks in a simlish-style made up language (though one clearly based on Japanese). The developers have done a fantastic job of creating a gorgeous and unique world, one that complements its strongly defined art style.

Kat, who has been separated from her friends, is on the hunt for answers after being lost in a storm and losing all her powers (yes, that old trope again). Sony have released two short anime videos to help players work out what’s going on, particularly those who missed the first game on the PS Vita or remastered on the PS Store and they’re well worth watching. While the story is not really unique Kat is well written and manages to pull us through the main storyline. 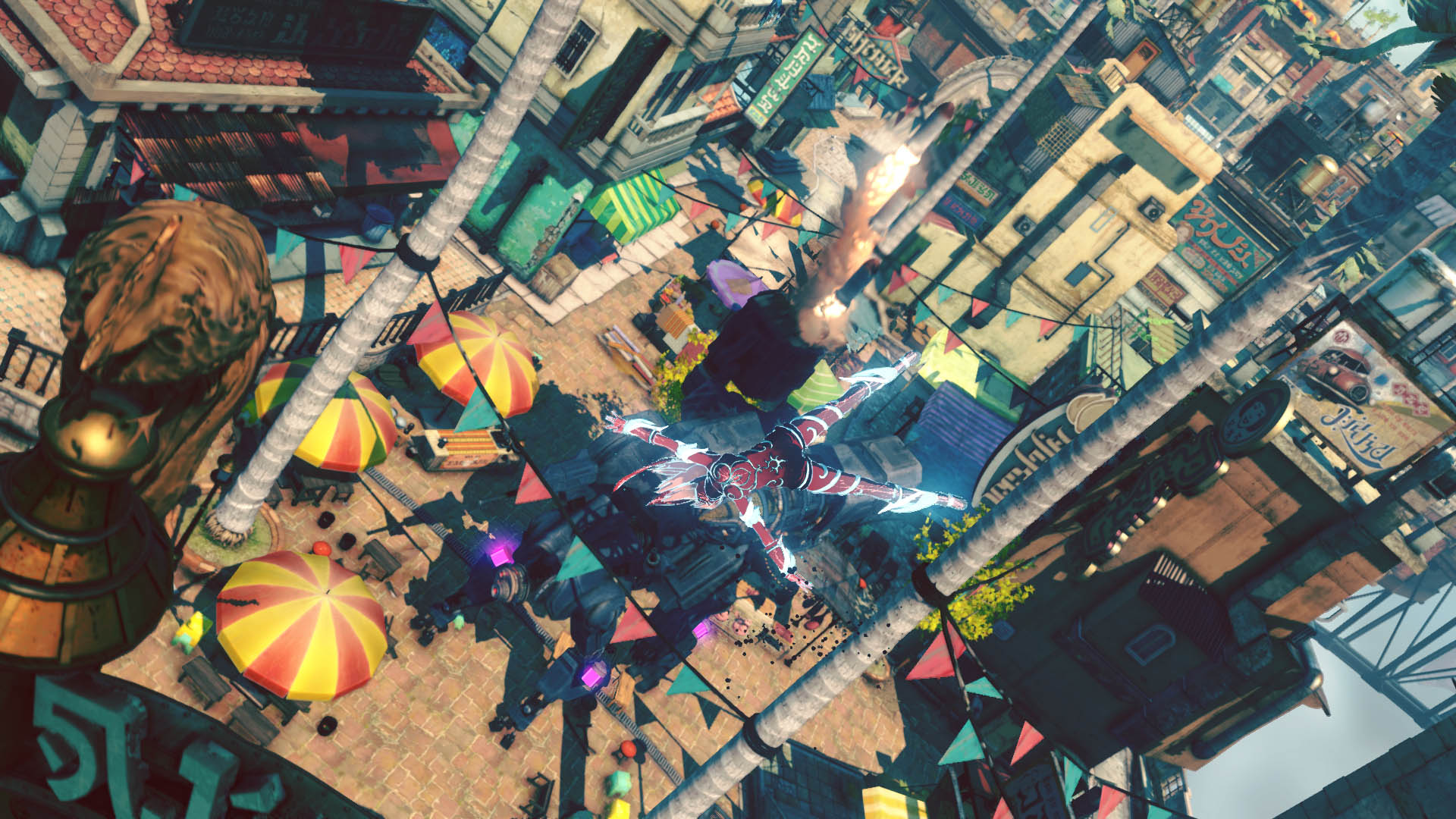 The same cannot be said for the side quests. Annoying and boring side quests that ape the worst elements of MMOs abound. Deliver this to three people, pick up five of these for someone. And Gravity Rush 2 is rarely content with allowing you to do something once. Instead it often makes you try whatever the task is three or five times before it finally lets you move on. Finally, there’s a few ill-thought-out stealth missions which are completely antithetical to the whole point of the game. Pretending to sneak around small bits of the world, when the world has been designed for flying is frustrating and always felt unnecessary.

There’s a huge variety of these side quests, it’s true, but there was a clear feeling that these are avoidable grinds. Your character Kat seems insatiably curious about the lives of strangers and totally submissive in accepting even the most menial of chores. The game tries to play this off by saying that’s she’s just a very helpful and concerned person, but that they have to acknowledge it in game I feel is an admittance that the side quests aren’t up to snuff. 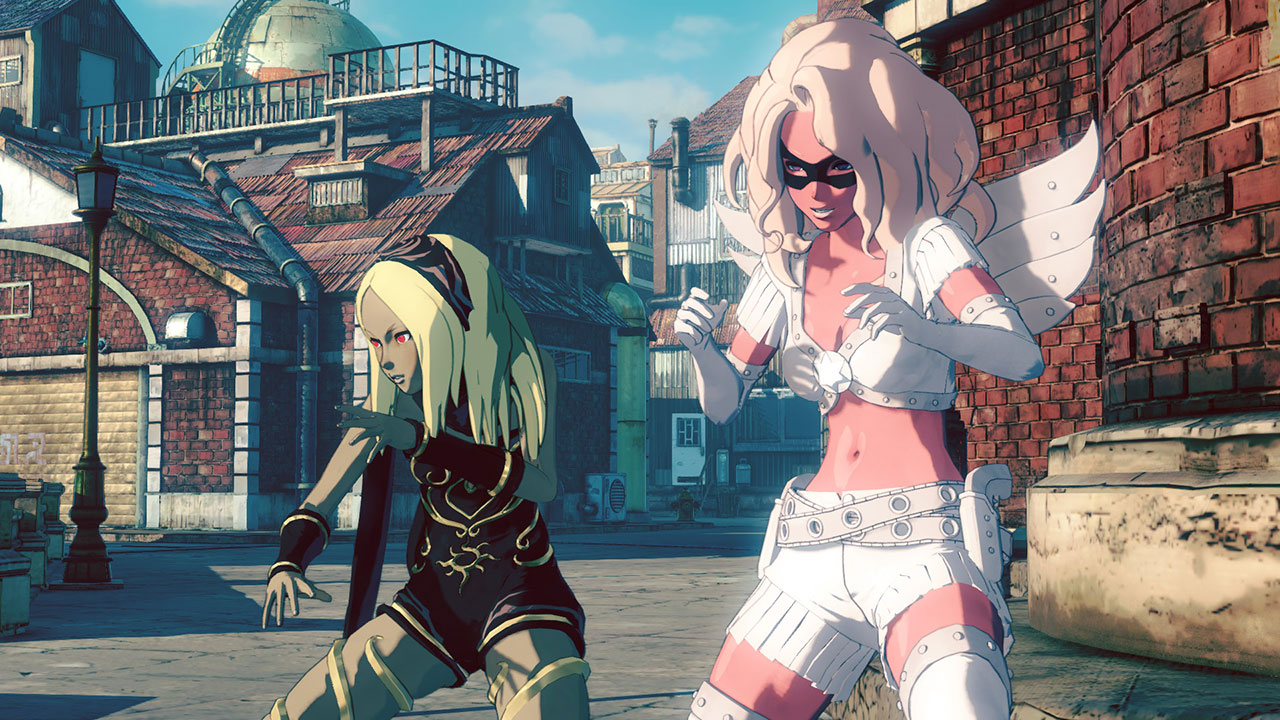 The combat, which can take place either on the ground or by flying towards enemies, opens up over the course of the game, but for most of it you are stuck with the extreme bare bones of a fighting system. It’s literally one button for hours, and its flaws are incongruously highlighted in a horrendous fight near the beginning of the game that had me yelling at the TV. Later on in the game you gain the ability to fight in one of three modes, one faster and lighter, one heavier but slower, and your default mode, which is somewhere in the middle. Even with this added variety however the moment-to-moment fighting just never really feels that enjoyable.

And this is made worse by a falling system that works fine for general transportation but falls short in the tight time and space constraints required by fights. Falling has a distinct floaty feeling, and a disorienting camera (potential sickness-inducing) can make locking onto targets or knowing where you an exercise in frustration. Enemies bob and move around too, making what was clear shots useless, leading you to become stuck on some bit of level geometry, confusing you and the camera even more. 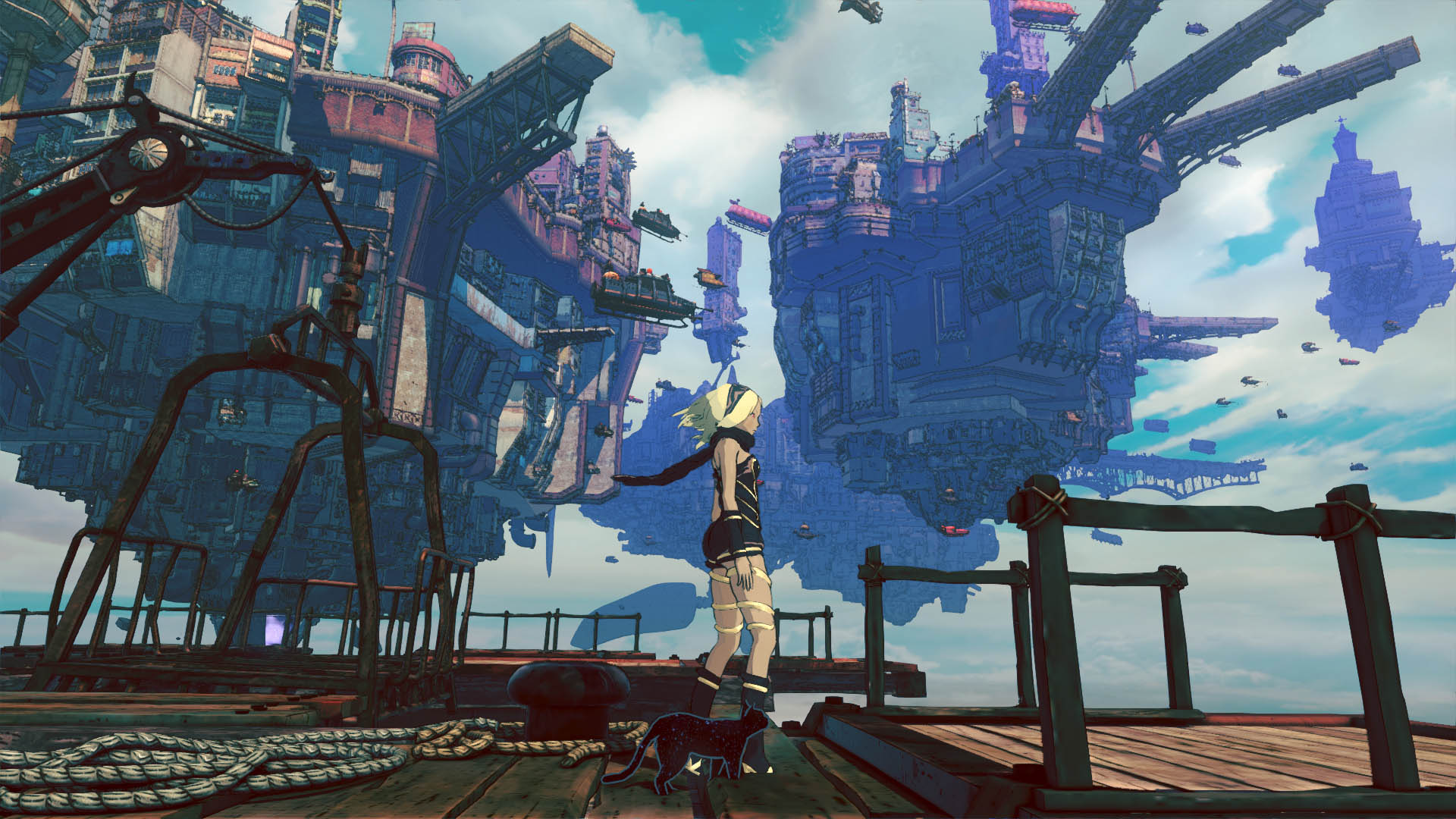 More positively, the music is outstanding. A perky mix of pop and jazz in the same vein as the Super Mario Bros series feels fresh and complements the open and vibrant environments very well. It could have done with a few more tracks, but otherwise the composers and performers have done an excellent job.

Gravity Rush 2 needs to be given huge credit for attempting to try something new. It is less about the fights and story that takes place as the world that you inhabit. Its large, semi open-world environments are gorgeous, and your ability to fall anywhere opens it up in new and exciting ways. For all of its flaws Gravity Rush 2 feels better than it should. It’s also a decent length, so you can really take your time to become adept at falling and fighting. There’s also a small online mode, where you have to take a photo of somewhere in the environment and send that as a challenge to other players and built in support for the PlayStation 4 Pro, which is always nice.

Gravity Rush 2 grabs hold of falling and pushes what you can do with it to the extreme. It’s a sequel that blows past its predecessor, and yet manages to retain the feeling that this is something different. Novelty for its own sake is rarely noteworthy, but this has managed to use it in a way that feels complete, if somewhat unsatisfying. Those looking for something different from your usual shooters, platformers and action-adventure games should rush to this game, you’ll be sure to fall for it.