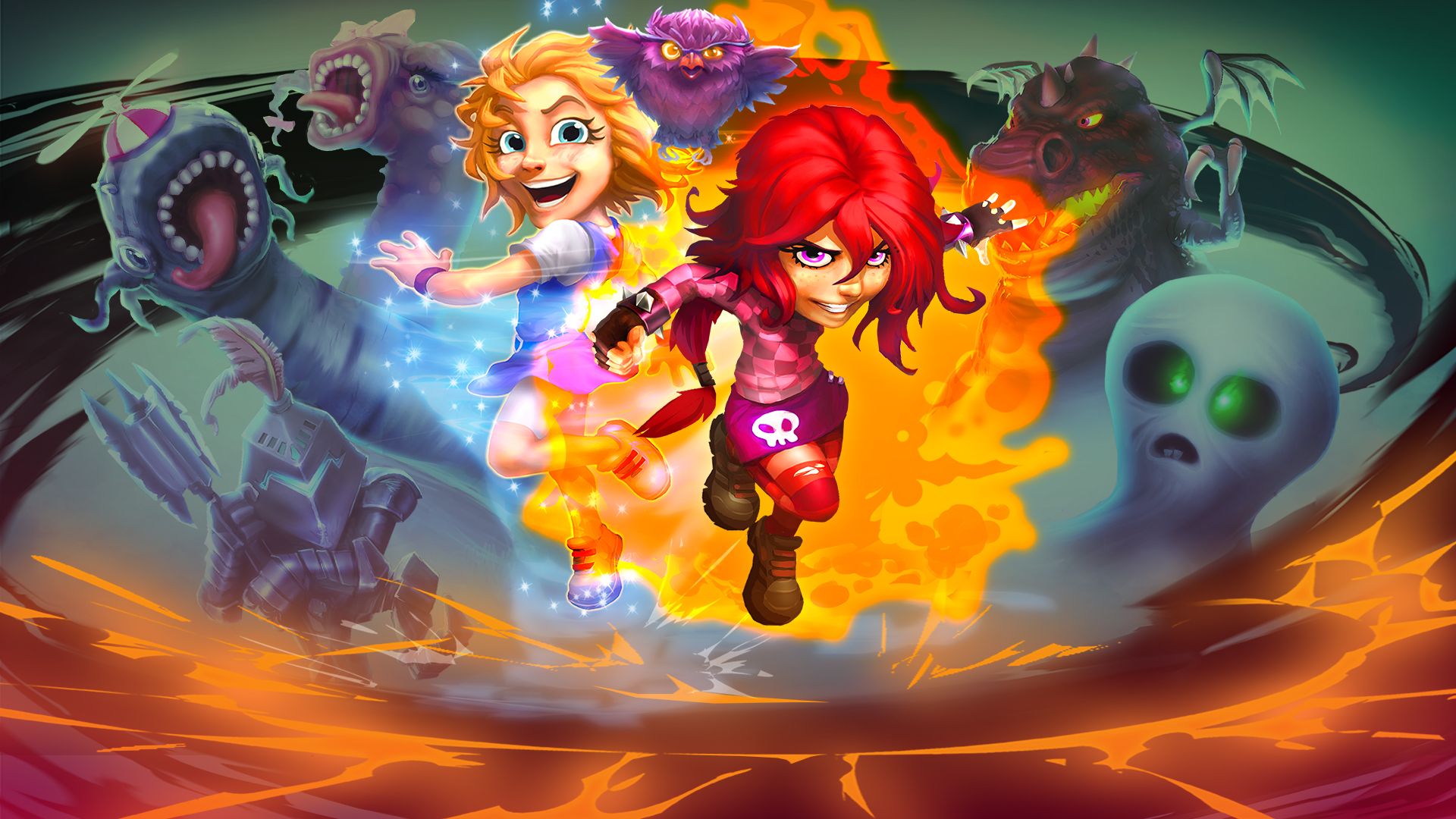 Notable for having a killer soundtrack back in 1987 when it was first released on Commodore 64 (C64), the story of one girl being sucked in to another dreamworld dimension by a magical crystal and her sister jumping through the mysterious portal to rescue her.

Mid 2000’s saw a revamp of the much loved and classic title in 2.5D with a more edgier and darker look.

Giana Sisters is a platformer and even the new refresh retained the sidescrolling platformer elements and encompasses two environments in one. 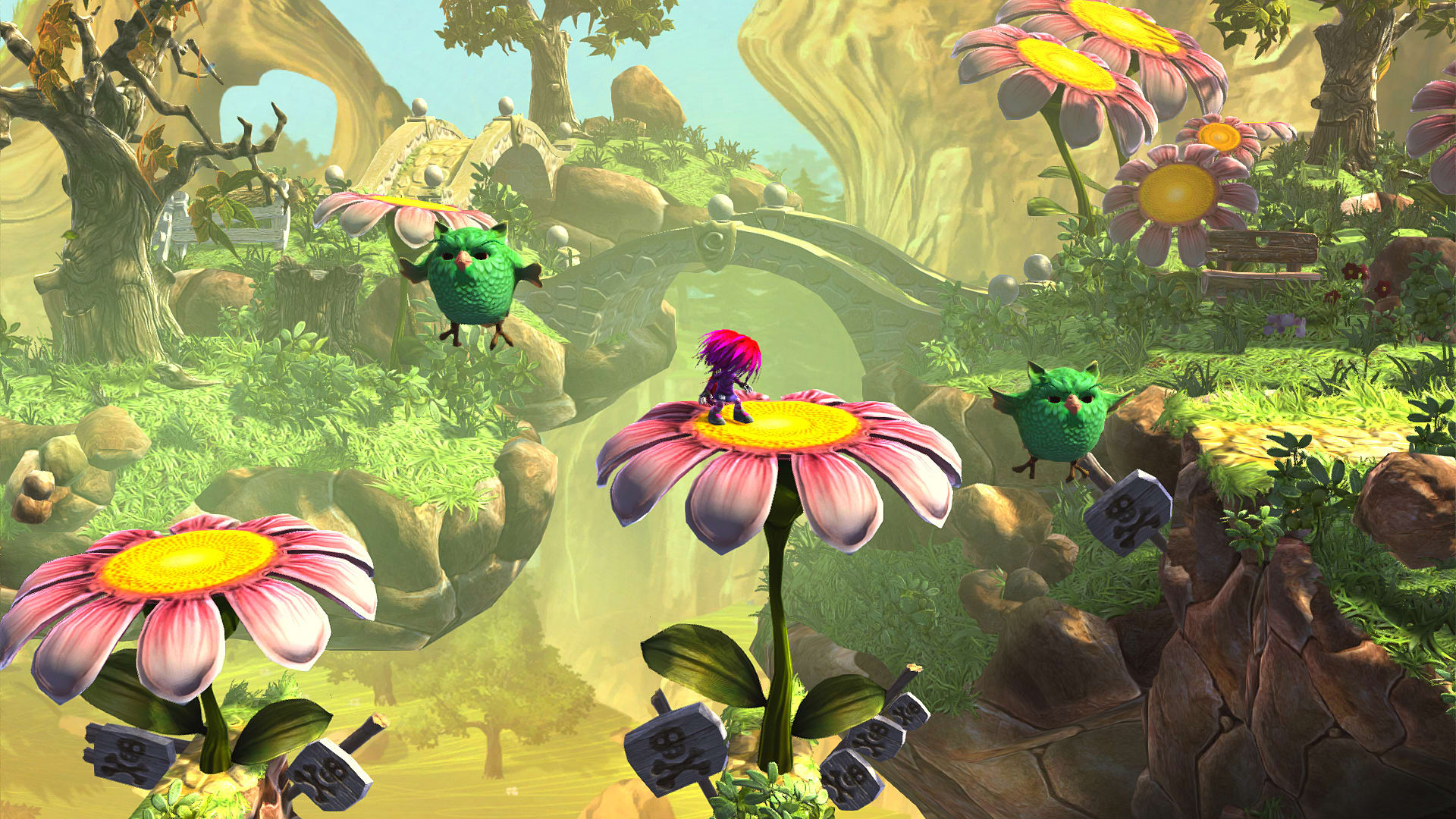 Giana Sisters has since been ported to consoles (PS4 and Xbox One) and now it’s right at home on Nintendo Switch thanks to developers Black Forest Games and THQ Nordic.

The Switch version is not just the standard game that released on PC and home based consoles. This is Giana Sisters: Twisted Dreams – The Owltimate Edition.

It contains all DLC to date including this versions namesake; Rise Of The Owlverlord. The DLC’s offer up a whole bevvy of new Levels and Worlds.

Giana Sisters is a hybrid of action and puzzle with a signature artstyle.

Each Level is a different dreamworld, selectable on a scrollable ‘map’ of sorts. To get through a Level successfully you need to alternate between two differing dimensions, on the fly as you play. 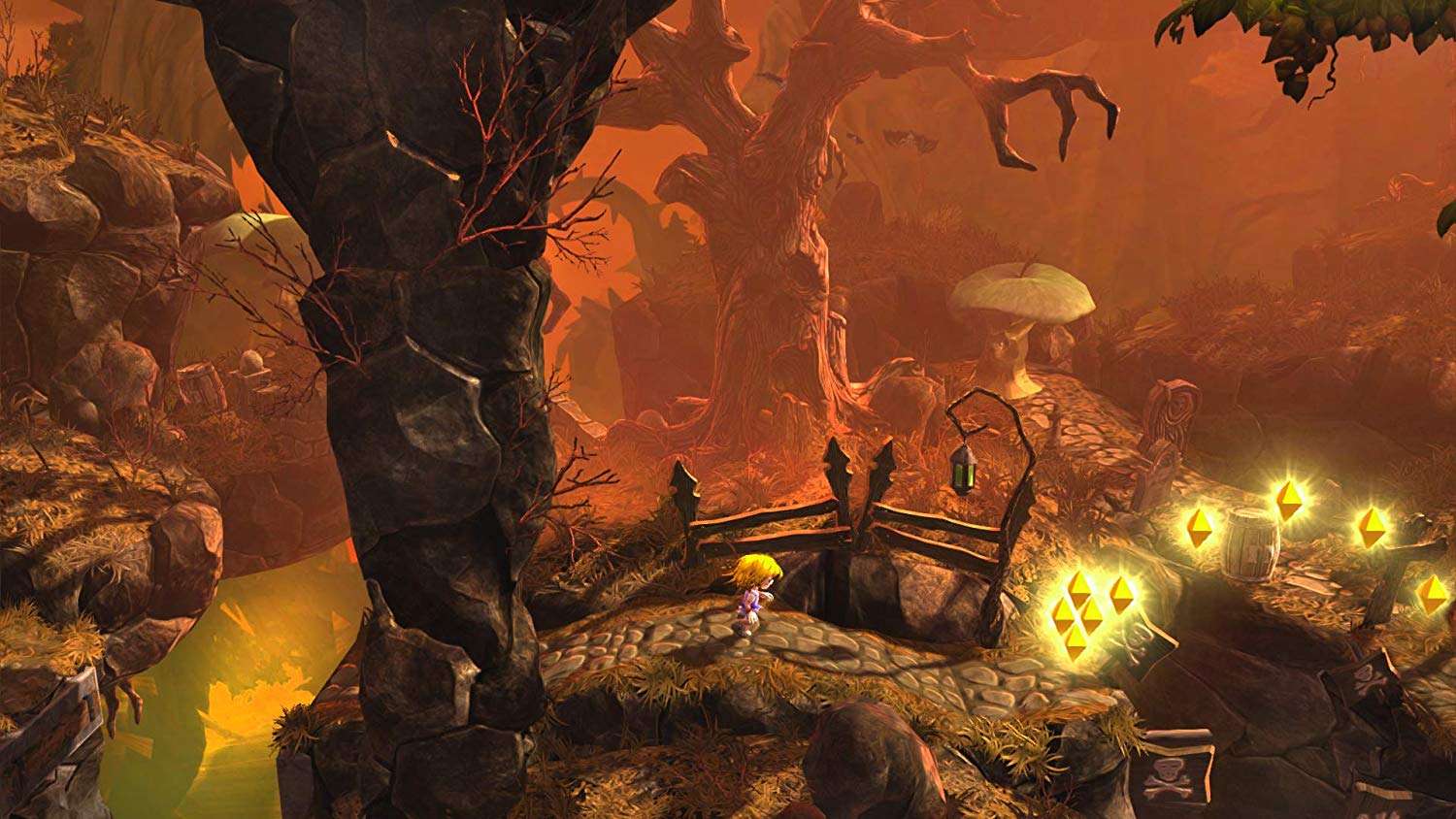 The two dimensions are total parallels to each other, one light, one dark. Your character also changes to reflect what dimension you are in and you’ll need to flick between the two environments constantly as a closed path maybe open in the alternate dimension, platforms will appear and disappear with the changes, aswell as the coloured crystals that you collect.

There’s not too much to the story, really. You are one sister trying to save the other one from a Dragon (initially) and asides from trying to survive each Level, environment and World, you need to collect up as many of these crystals as you can. However you don’t need to get each and every crystal in one World in order to progress to the other – you just need to get to the end. There are 23 base Levels spanning over 3 Worlds in the main game. Add to this the DLC’s and 5 completely new additions exclusive to Switch – that blows out the gameplay to a whopping 40+ Levels, including Bosses. 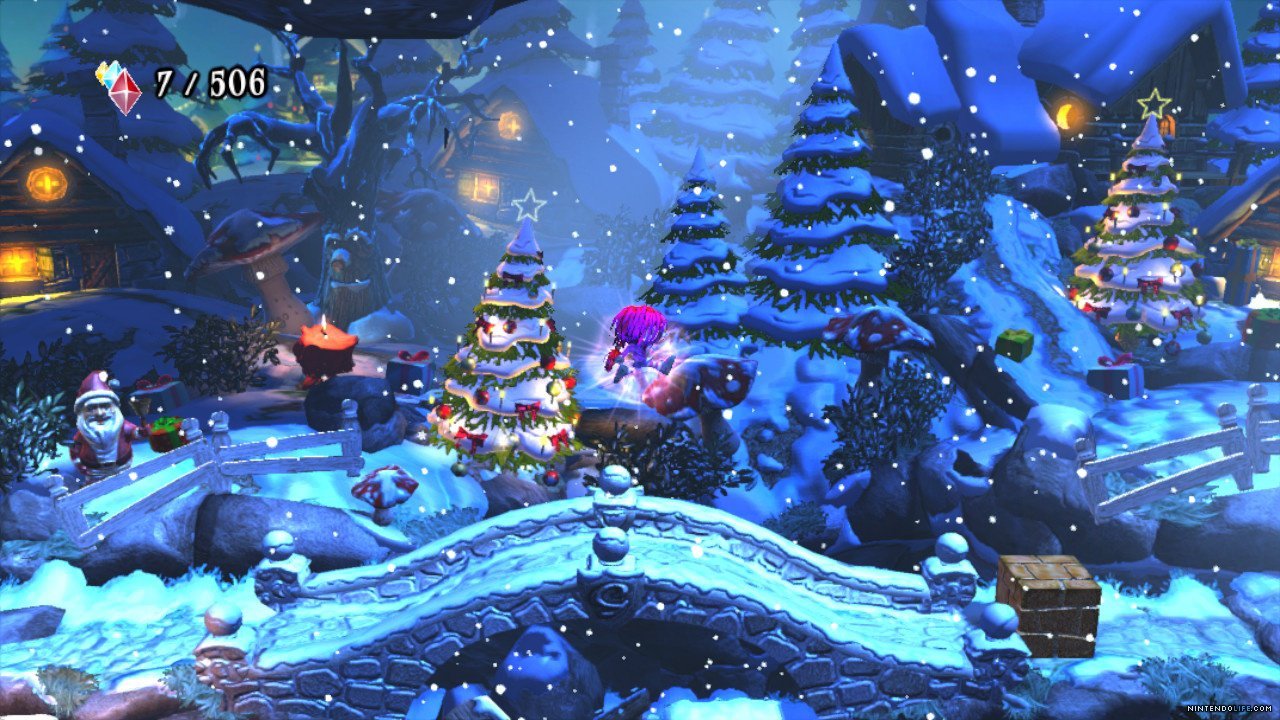 Levels are repeatable, so as your playable sister gains more skills, from fireballing to gliding and more it would not a be amiss to go back to a world where you were previously unable to collect up all of the crystals before.

Completionists, like me are absolutely going to do this. The more complete a Level is – the faster you get to unlock more Game Modes, such as Time Trial.

There is also giant crystals which unlock in-game content. 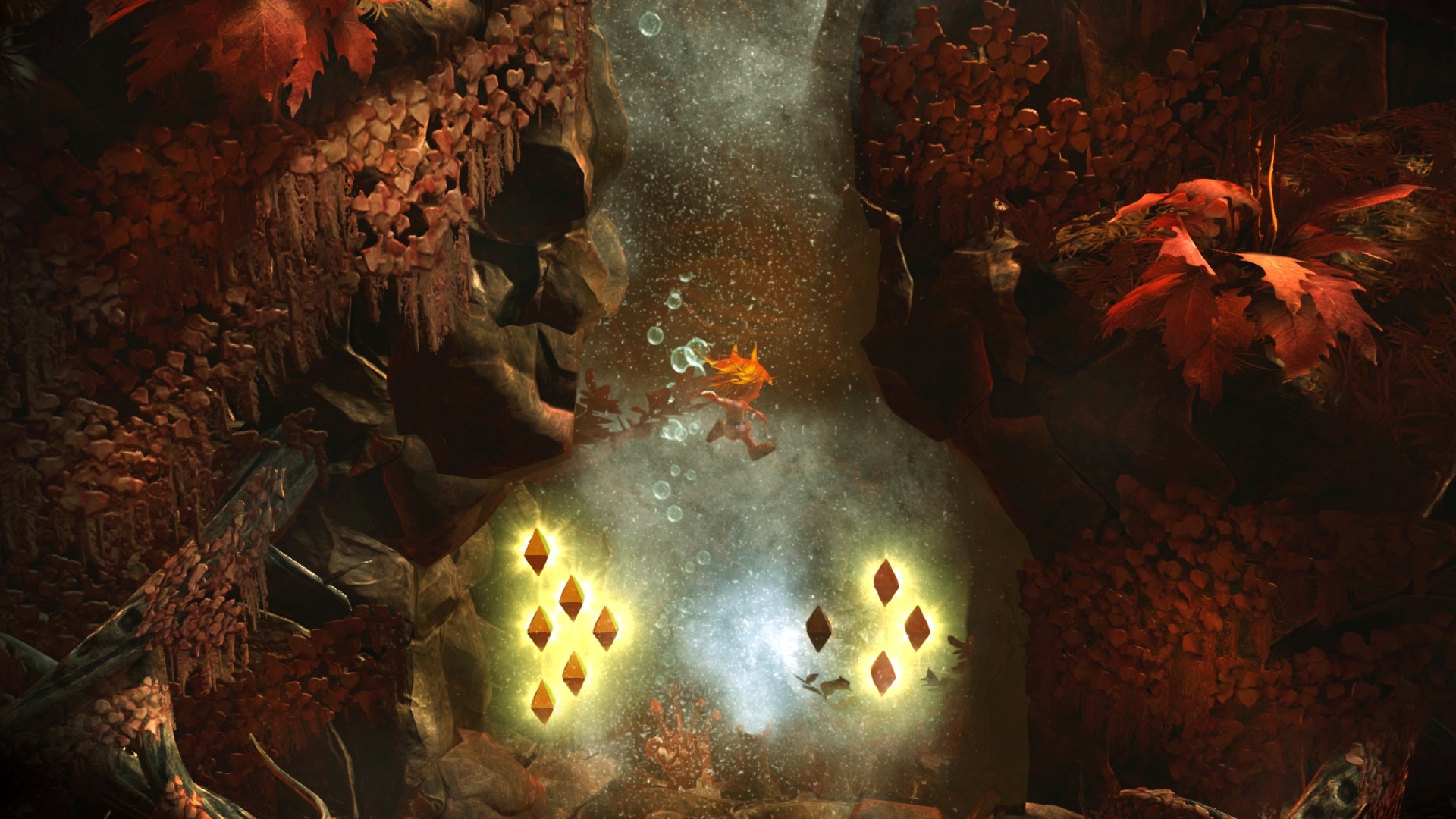 The DLC’s are immediately playable. So you can opt to give them a run through as soon as you load up the Main Menu, but be warned that some of the DLC has a hefty spike in difficulty and if you have not played the new Giana Sisters: Twisted Dreams before – I’d suggest ushering your way in to the main game first.

Giana Sisters: Twisted Dreams – Owltimate Edition is the perfect title for Switch. While each World / Level is a lengthy play through (30 minutes to one hour) you can pick up and play as you go or on the go.

While (thankfully) there is no perma-death, there are checkpoints. Die (and you will) you’re back at your last checkpoint. Evenly spaced out, there were moments where I had to get myself through a very complex set of environmental hazards just to find that death was around the corner and the next checkpoint was just a little too far off. 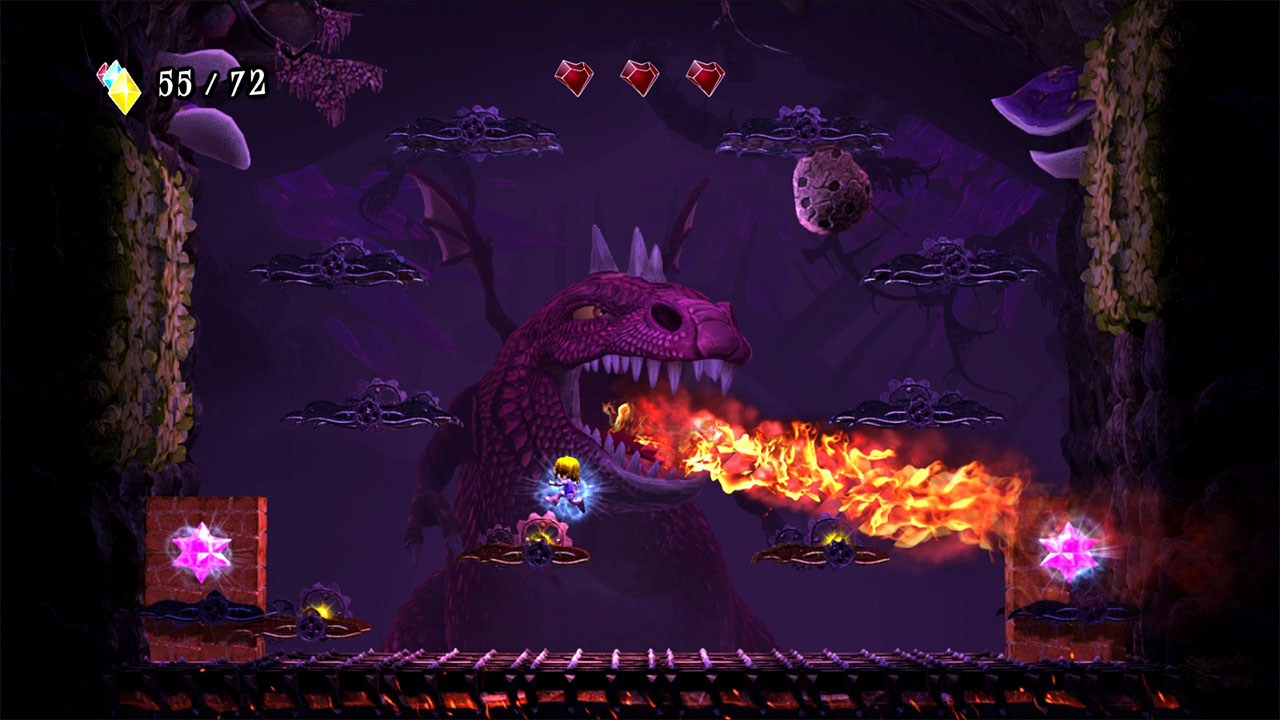 Giana Sisters: Twisted Dreams – Owltimate Edition retained the heavy rock soundtrack it was always known for back in the day from famous german video game music composer Chris Huelsbeck and swedish band Machinae Supremacy – and this adjusts as you flick between the two dimensions, I found myself enjoying the soundtrack way more than I ever have on a game to date.

A fantastic present day platformer to take with you on the Switch, highly playable, definitely replayable and choc filled with so many Levels and Worlds you’ll want to get lost in the sisters dreamworld alternate dimensions for months on end.