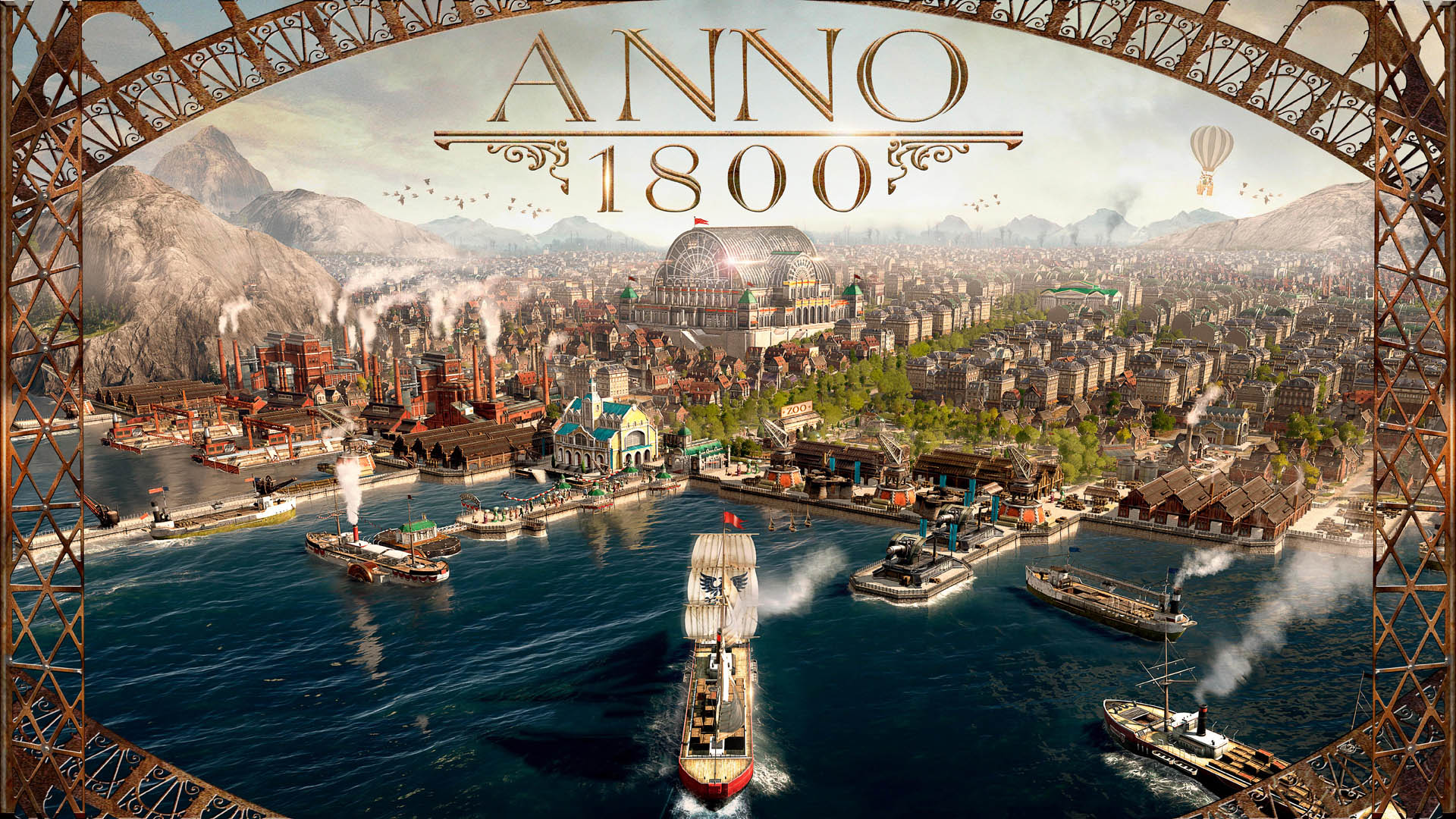 With Anno 1800, Ubisoft return from a two-game sci-fi sabbatical, taking the series back to its historical roots, this time to the Industrial Revolution.

Despite being somewhat a fan of city builders and strategy games on the whole, I’d never played an Anno game. I’m not sure why, but they certainly looked a lot more complex that the likes of SimCity and Cities Skylines.

Anno 1800 is about as pure a city builder as you can get. It doesn’t bog players down with transportation woes. The game, instead, concentrates on getting manufacturing supply lines up and running to allow your society to thrive.

For a complex game, Anno 1800 is remarkably free of documentation. The game, instead gives players just enough to get started and sends them on their way. The campaign, which comes complete with a storyline sets up players with the basic game mechanics, but still leaves much of the detail up to the player to discover. 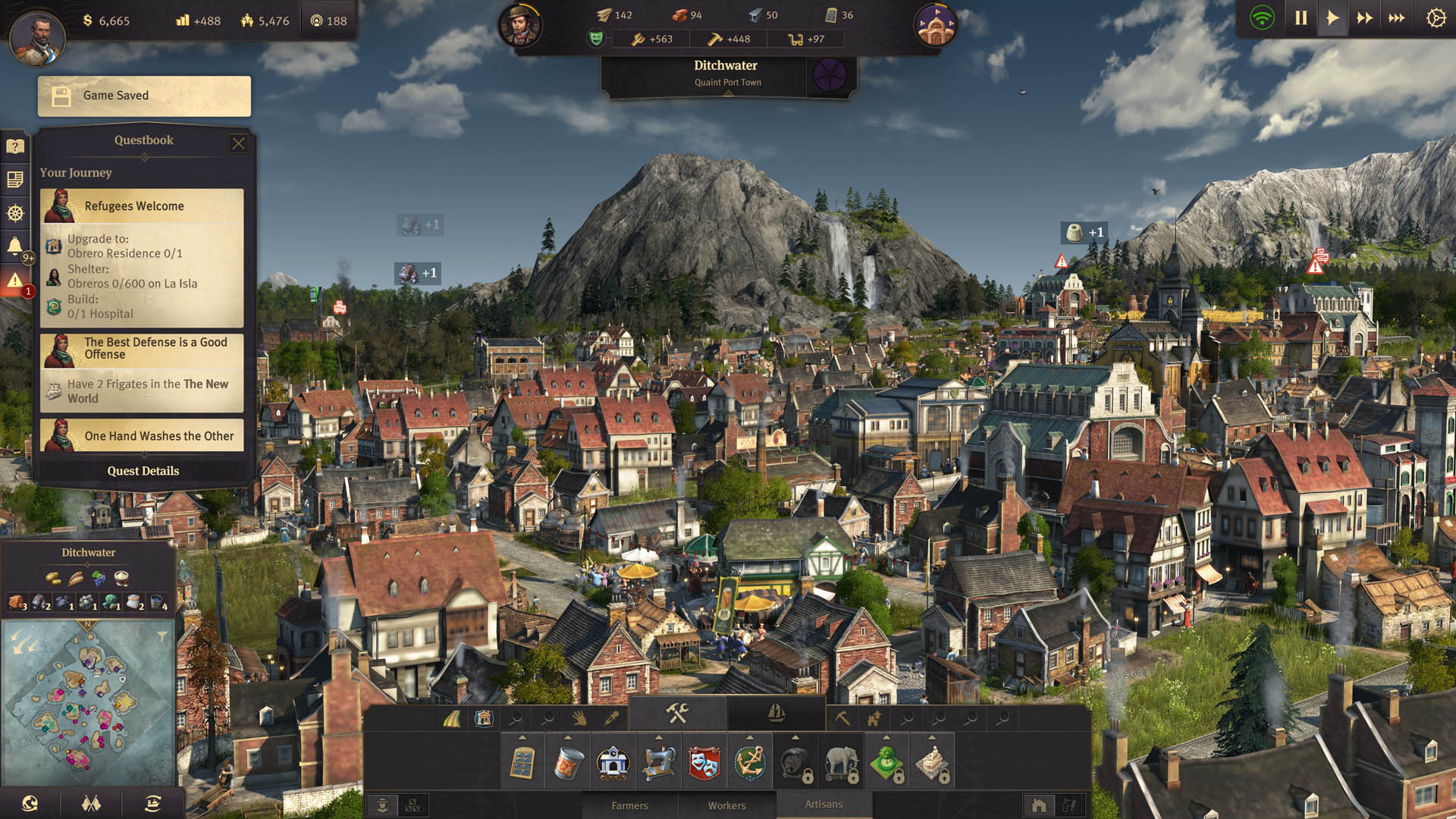 At its core, Anno 1800 is all about the people. You need to keep the people happy in order to encourage population grown and in turn economic and technological advancement. You start with farmers, who, once you’ve fulfilled their desires, upgrade into workers, who then upgrade into artisans and then on to Engineers. Each has their own desires and brings with them their own technological advancements.

People need stuff. Stuff needs materials, maybe refining, and manufacturing. That’s effectively the game right there. You need to make sure that you’ve enough raw materials to create the goods that allow your population to upgrade and in turn require even more, technically advanced stuff.

It’s only once you put two and two together that you start to realise that the game’s supply chains are, basically, a bit of a one-trick pony. And it’s a good job too. As the game progresses, you need to grow, mine, farm and catch more and more raw materials, which in turn need processing and turning into the goods your empire requires. 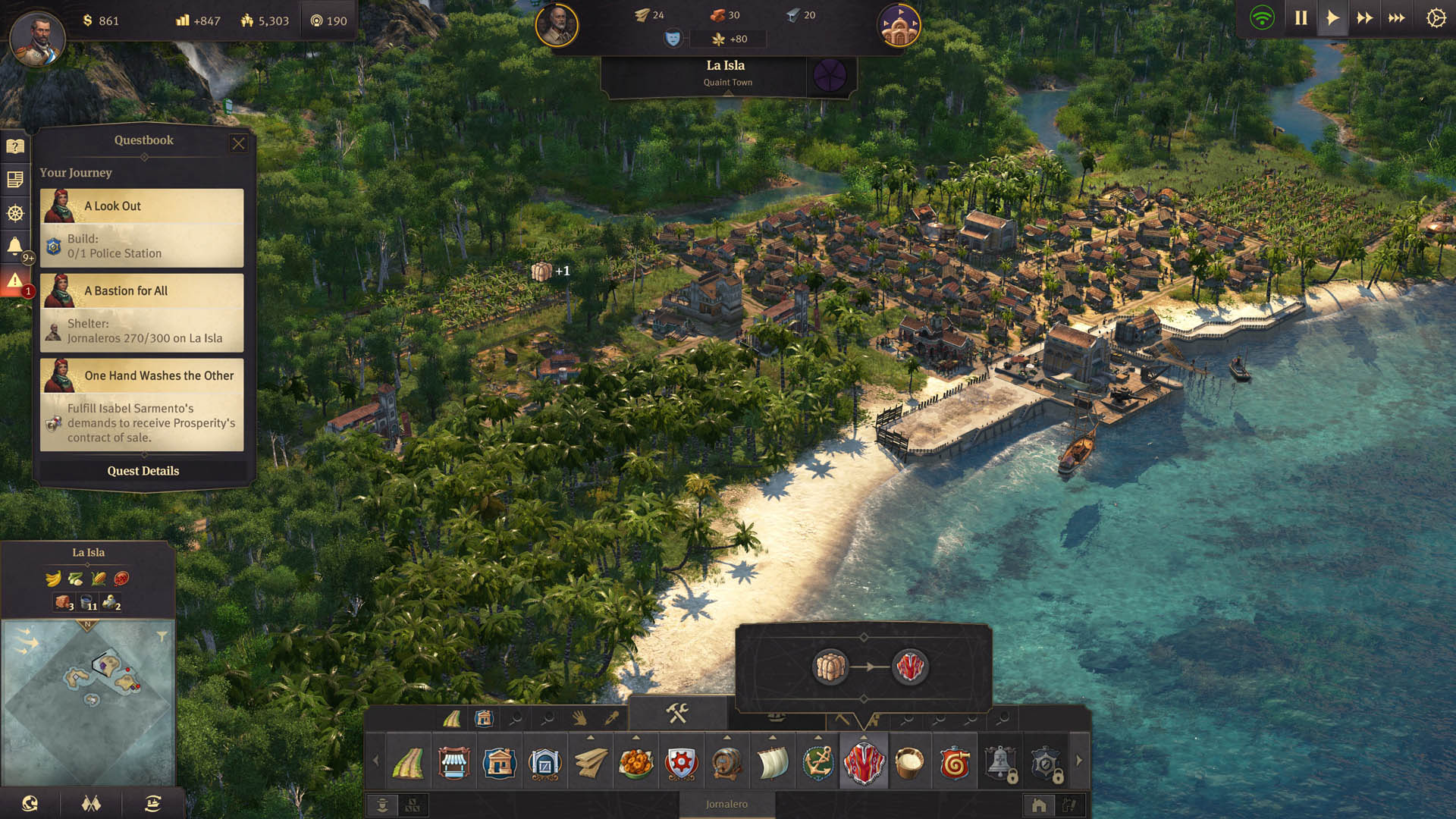 Not every landmass has access to raw materials or is able to grow the crops you need. You can buy these materials from your neighbours. Building ships allows you to create trade routes, subject to the right diplomatic treaties. You can also go off and set up colonies and obtain raw materials from other landmasses.

Managing all this is very onerous to start with. If you expand too quickly, you’ll soon start haemorrhaging money. If your population starts moving out, your finances will go south quickly. With no manual, some of the accounting I encountered was a complete mystery, with my ledger books fluctuating wildly, and with no apparent way of sorting it out.

Patience is key with Anno 1800. There’s no sense in rushing and over-stretching your fledgling society.

A few farmers, enough to maintain the initial crops and livestock required to keep them happy, woodcutters and a sawmill for building materials is enough to get you going. A marketplace and a pub also help make your farmers happy. Once they’re content your farmhouses fill with occupants. But it’s not hard to over-reach. 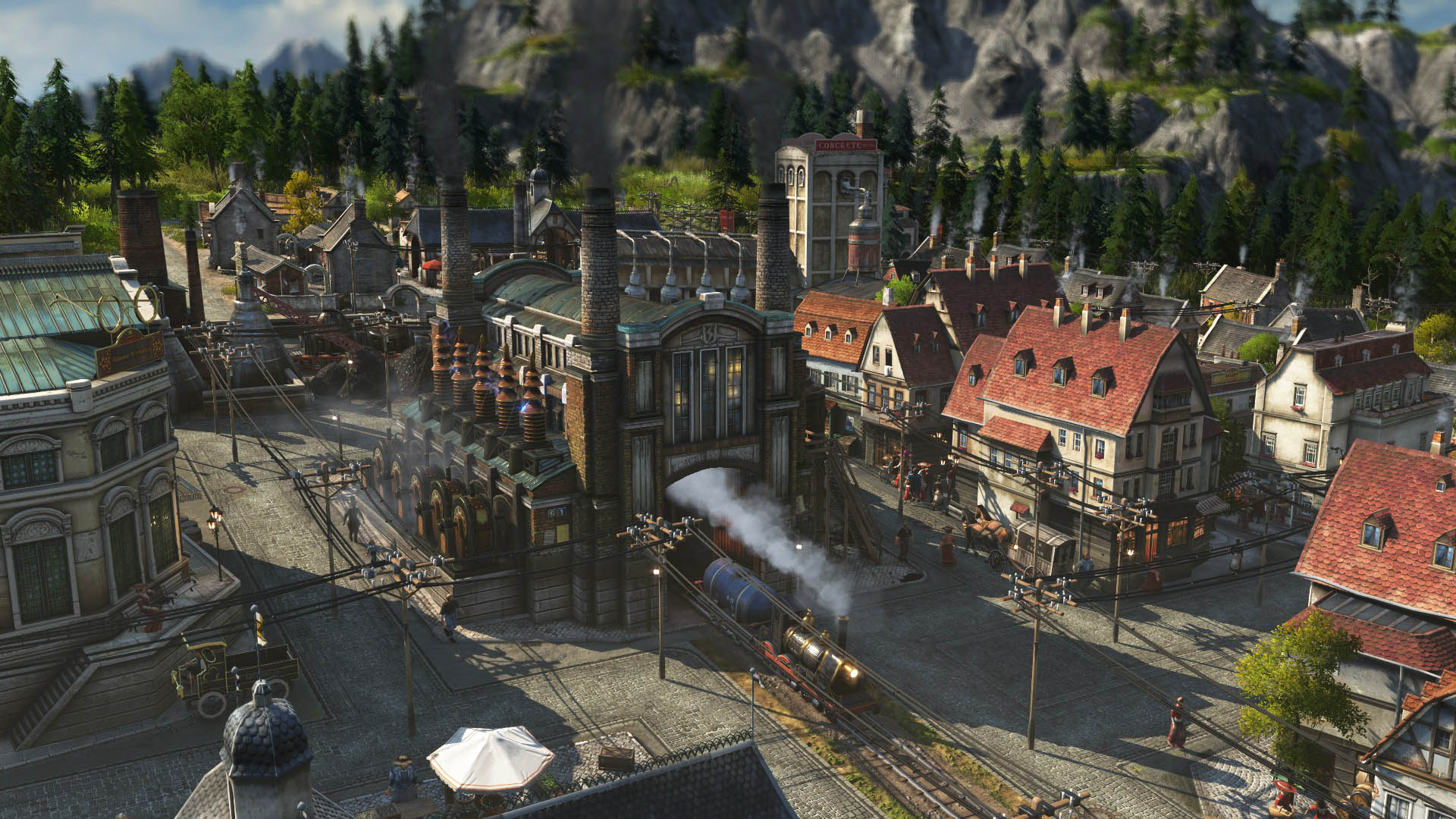 The supply chain works via a system of warehouses into which your materials are stored, all connected by roads (and later rail). Processing structures use the materials in your warehouses (which are all magically inter-connected). You need a warehouse close enough to your all supply / delivery buildings. Warehouse stock levels can be adjusted with sliders allowing players to export surplus or import if there’s a deficit.

The campaign leaves players to it most of the time, but the story progresses via a series of quests, some of which may take hours of technological advancement to achieve. The campaign is a tale of redemption, as brother and sister seek to prove their later father innocent of the traitorous actions than had him convicted.

As well as progressing via hard graft and the main quests, neighbouring empires will offer optional quests. These can come with some risk in themselves, but also, if you fail, risk damaging your diplomatic relations with the quest giver.

Naval manoeuvring plays a large part of the game, with ships being required to effectively trade, transport goods and explore the map. In order to protect your trade routes from pirates and hostile nations, players need to build a fleet of military ships. The campaign, also sends players on an exploration to the new world, opening up a whole new map and new goods to manufacture. Some of these goods are needed in the old world and vice versa, explaining trade routes across continents. 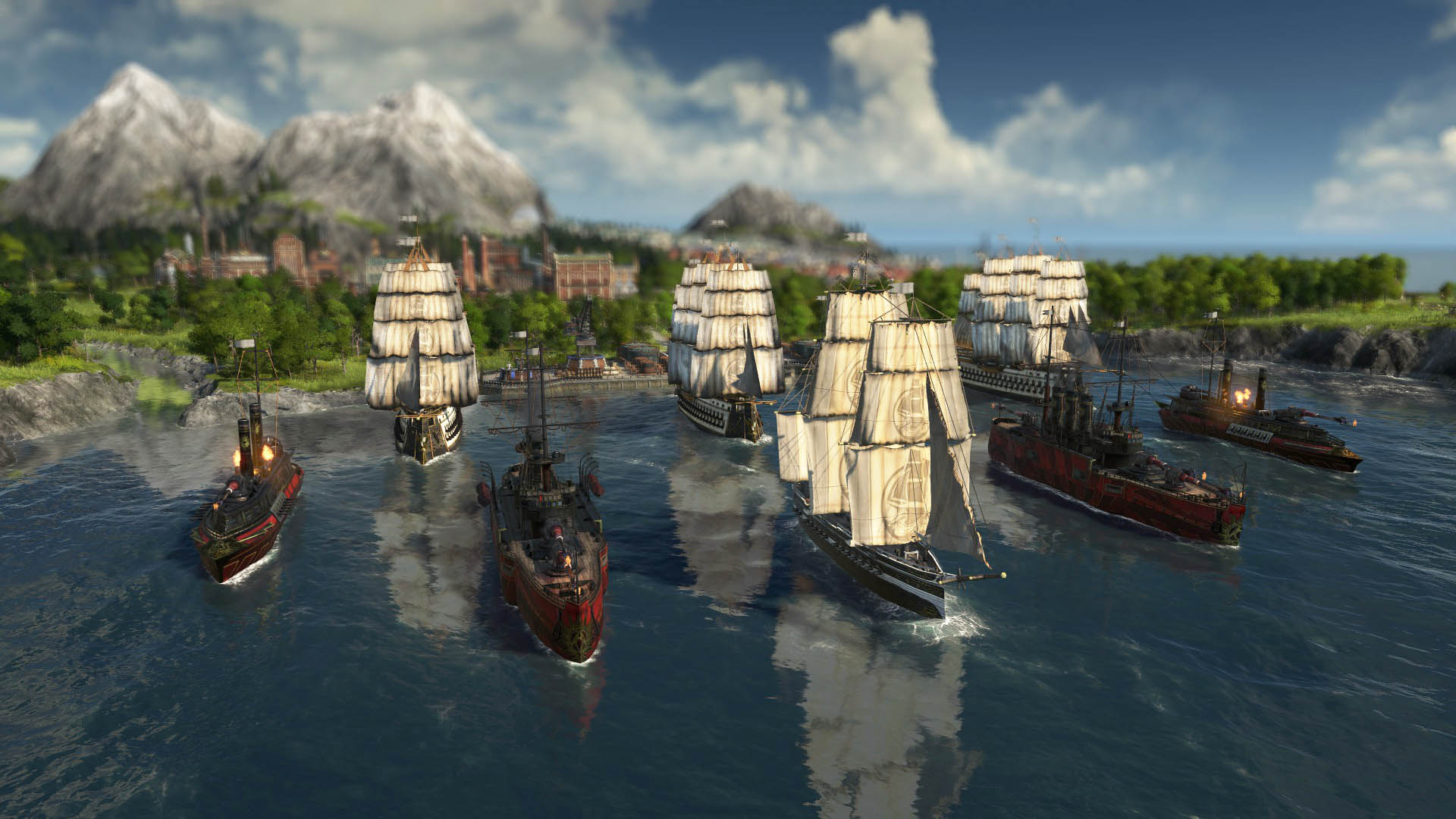 The game does a nice job of pacing your gameplay. As the mechanics open up, tasks that once required micromanaging start to tick along nicely, giving players a breather, and the time to embark on quests, visit colonies and start expeditions. You’ll not find yourself having to stop, mid-sea-battle to tend to your sheep or sort out lumberjack issues.

Once you complete the campaign, the game reverts to a sandbox allowing you to play…well, forever. You can, or course, slip straight into sandbox and play without the plot interruptions, concentrating on just getting your supply lines up and running.

Anno 1800 looks beautiful, especially for a strategy game. Your tiny Lilliputian society even looks great when zoomed right in. You can see all your citizens at work and play. The camera system is uncompromising, allowing full freedom of movement to easily adjust and advance your society. Some of the UI was a bit small, but I was playing at 1440p on a 27-inch monitor.

In a similar way to 2K’s Civilization games, Ubisoft have nailed the use of a rousing orchestral soundtrack in the game. For music that plays continuously, I never felt that it was getting tedious, which I can’t say is the same for some other strategy games out there. 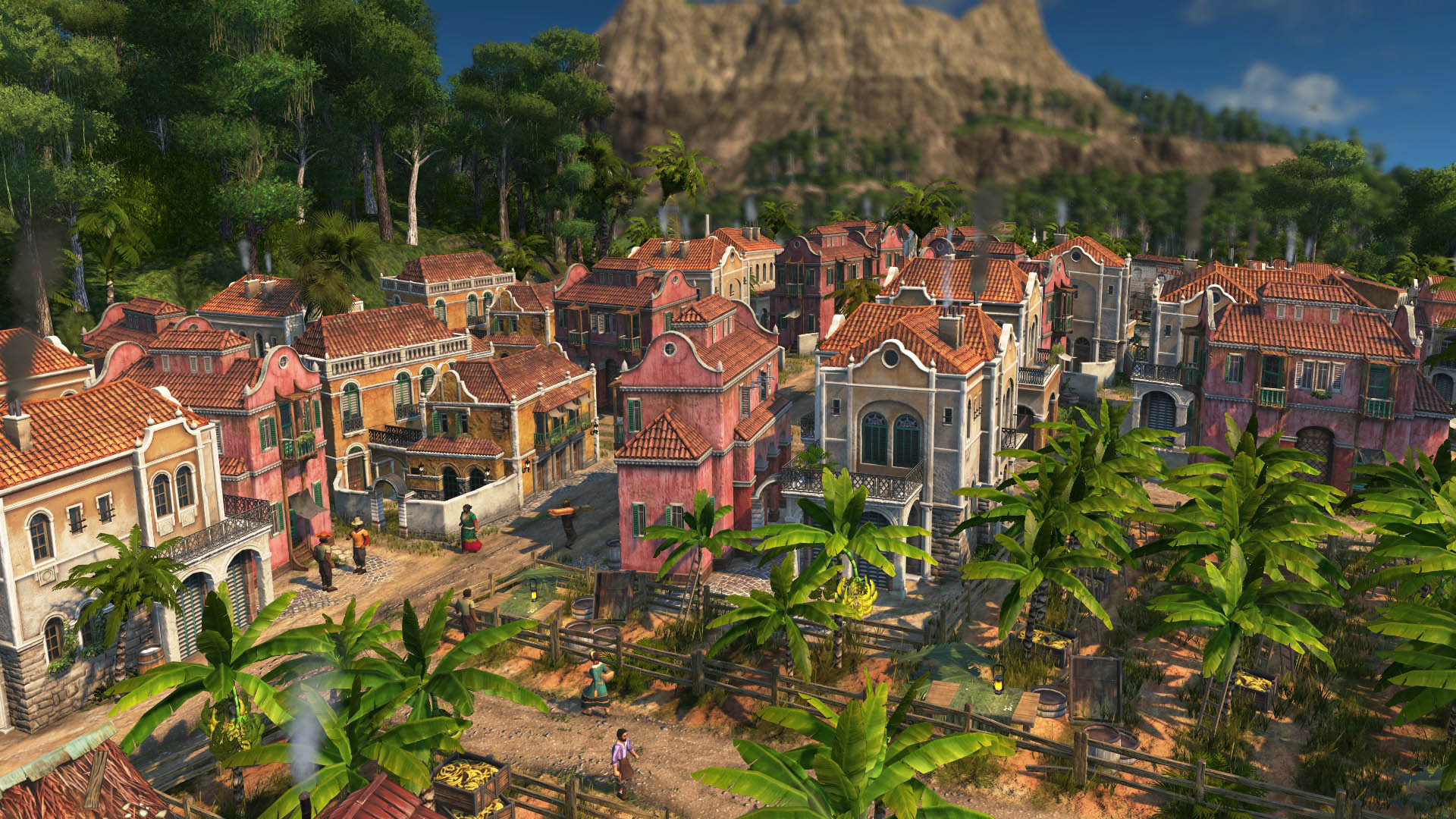 As well as the campaign and sandbox modes, Anno 1800 also has a multiplayer mode. Players can set-up a game and tick a box to make it public. Alternatively, the game can be played exclusively with friends via UPlay, or locally via LAN. Win conditions range upward from achieving a population of 5000, allowing for (relatively) short matches as well as epic tournaments.

The initial learning curve would have been nicely offset by the availability of a proper manual. Whist the campaign does ease you into the game mechanics, there does seem to be an assumption that you’ve played an Anno game before, which I hadn’t. As such, it took a while to fill in the blanks, resulting in some poor planning early on.

Similarly, knowing where to look to get a good overview of my society would have been handy. I feel that the game needs to better illustrate what’s going on, especially when you’ve expanded across multiple islands and multiple continents.

As much a resource management game as it is a city builder, Anno 1800 does nothing by halves. Each facet of the game is complete and works towards the development of your society, from the humble farmer to powerful battle cruisers.

Anno 1800 is the deep, slightly intimidating game that I though it would be, but it is also a lot of fun. The game grows with the play, unlocking extra resources and technology. It’s a massive time sink of a game and, once it’s got you, you’ll find it very hard to put it down.