Expeditions for Legends of Runeterra 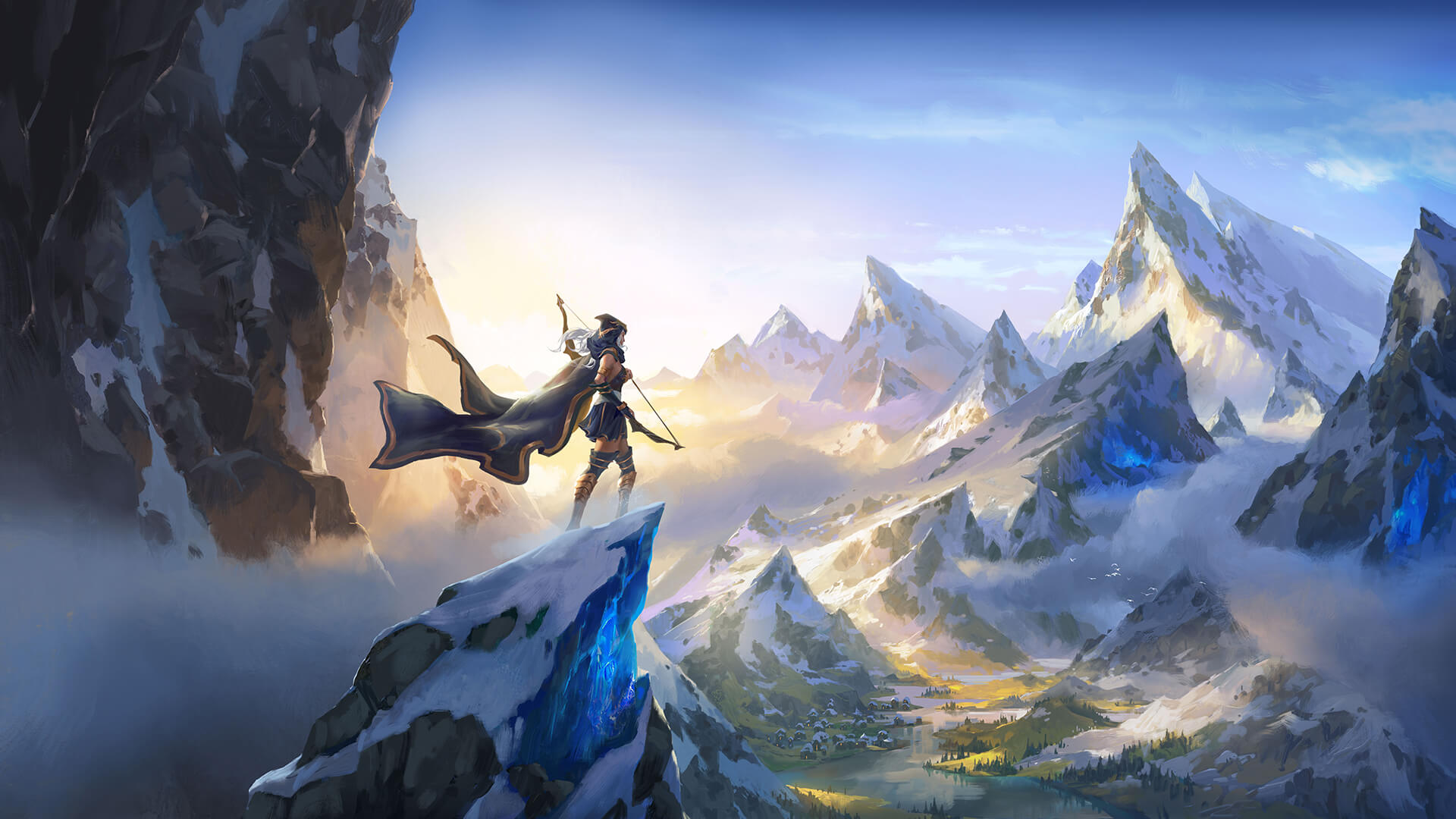 Set in the world of League of Legends, Legends of Runeterra (LoR) is a digital strategy card game where skill, creativity, and cleverness determine your success.

In LoR you will go forth in heated battles building decks with your favorite League champions (and new characters) from the regions of Runeterra, each with their own style and strategic advantage.

Face off in dynamic, alternating combat full of opportunities for outplay and earn cards for free as you play or buy exactly what you want in the store, you’re fully in control of your collection.

But that’s just the beginning… 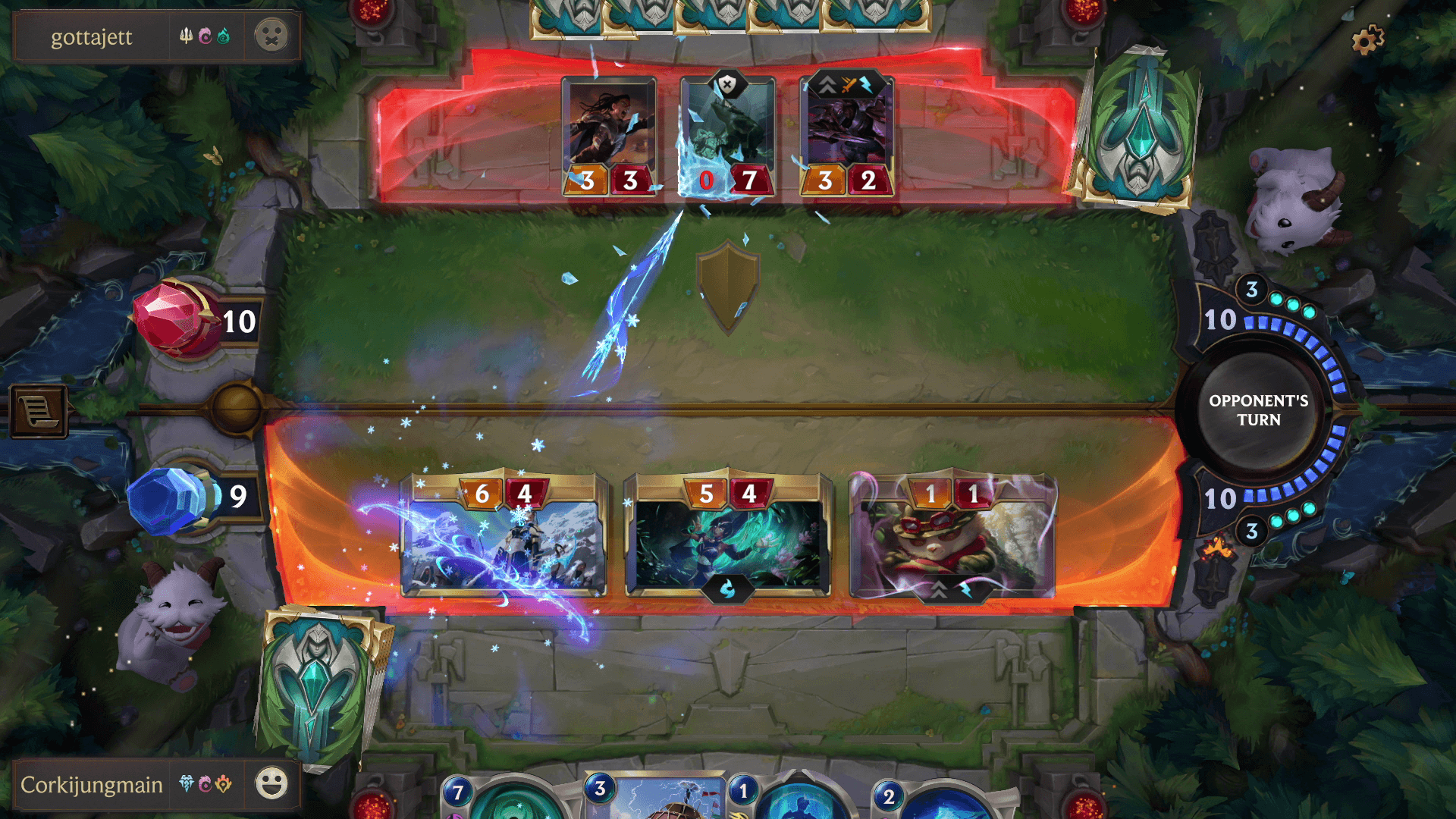 LoR is still in active development, but Riot Games are gearing up for beta in early 2020. In the meantime, they’re granting limited access for a couple preview patches (this is the second of the two).

These patches are a way for the devs to give an early look at the game while it’s still in development, showcase new features as they go… and squash some bugs in the process. And as a bonus for playing in these preview patches, you will receive a bunch of wildcards up front to help jump-start your deckbuilding experience. 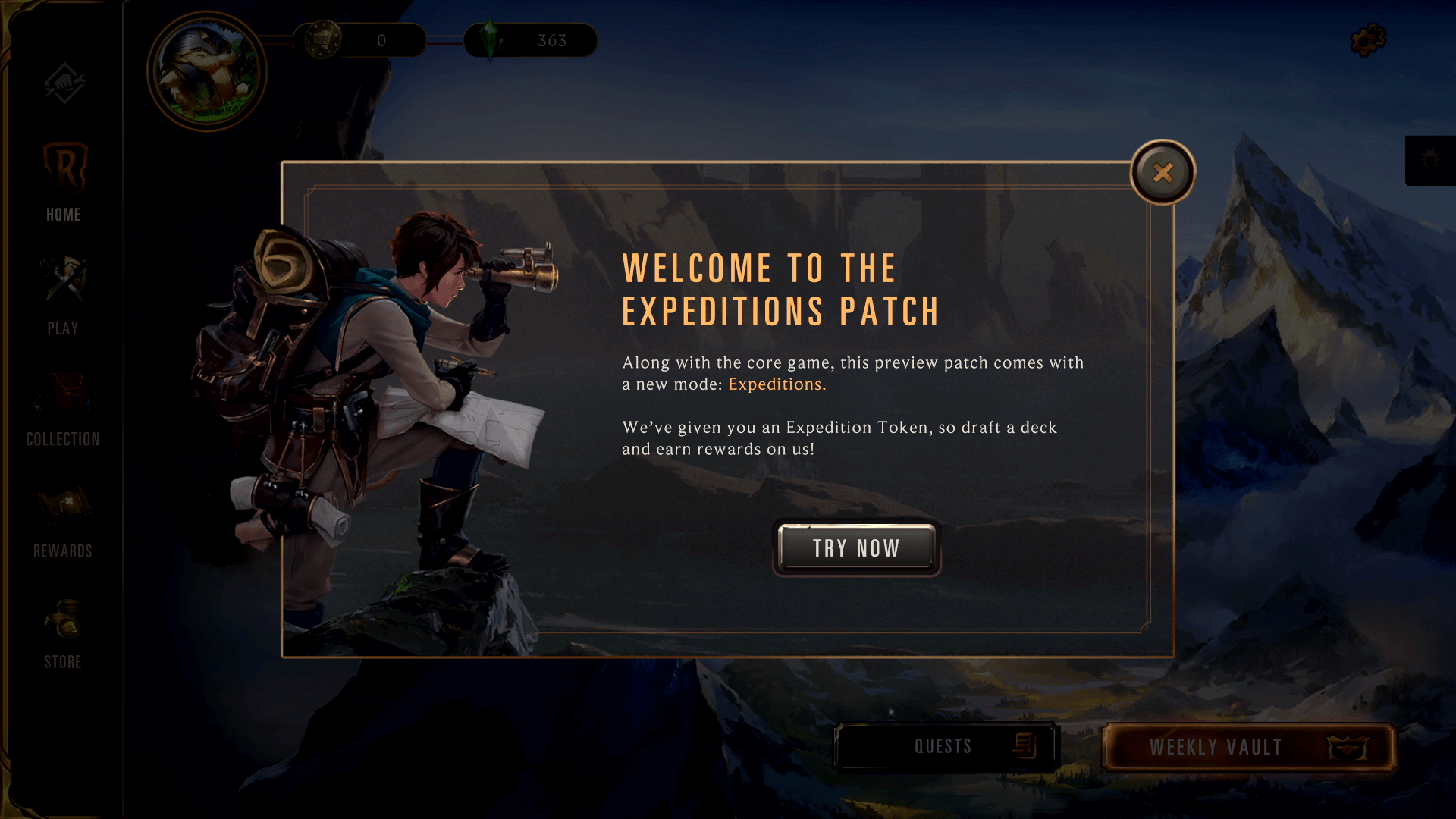 This preview patch is all about the new Expeditions mode, so they are also providing some new bonuses to get you started on your runs, one Expeditions Token and 8000 shards.

In the Expeditions mode, you draft a deck as you go, overcoming as many opponents as you can with an evolving set of cards.

So you’ve found your favorite champs and learned the art of battle. But there’s more than one way to play Legends of Runeterra, and different skills you can master.

Like building a deck from scratch and crafting your strategy on the fly. Can you navigate the unknown, adapting to new cards and new foes, and still come out victorious? 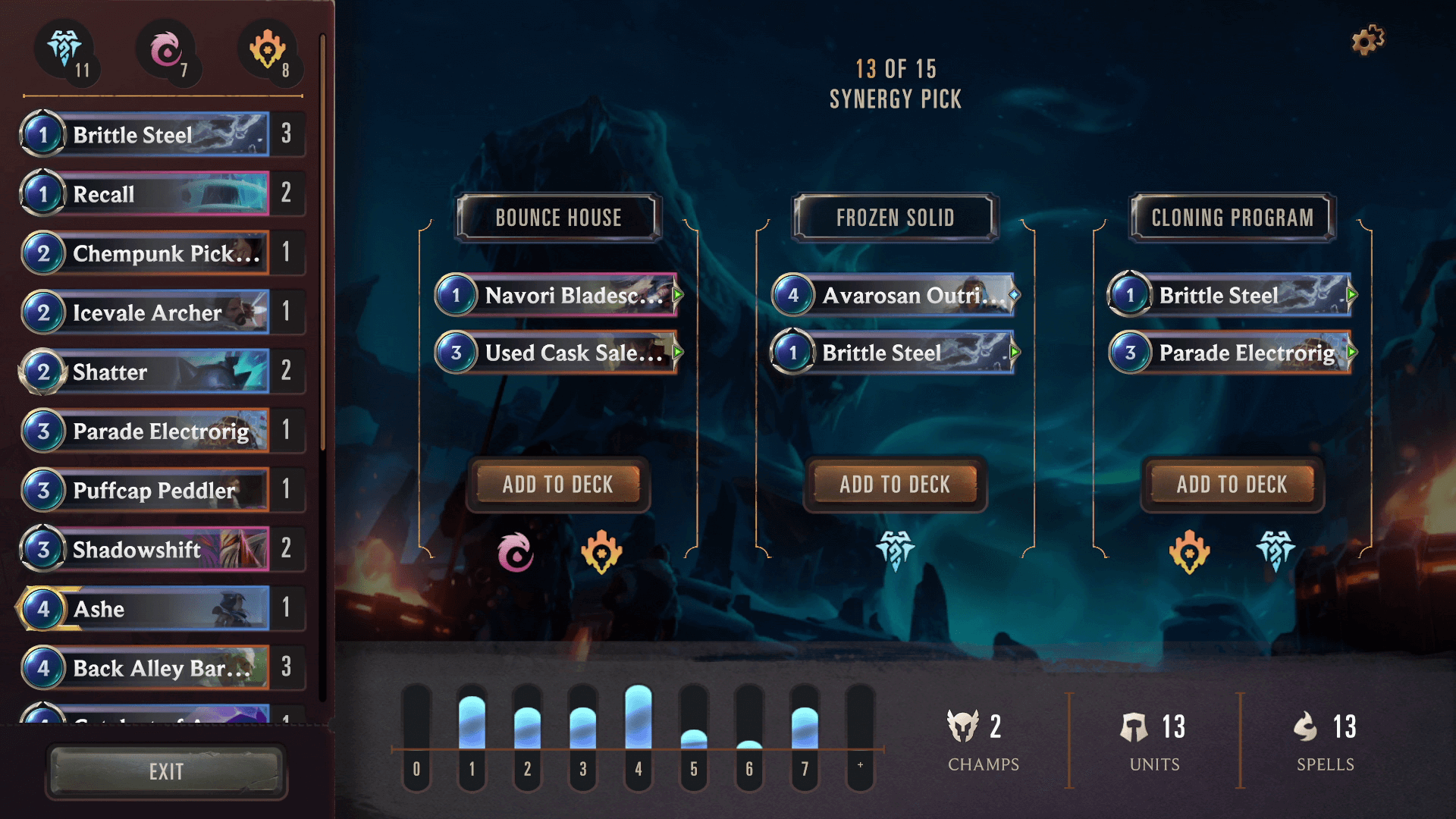 In the Expeditions mode, you draft a deck as you go, overcoming as many opponents as you can with an evolving set of cards. The farther you journey, the greater the challenge; but when you’re on an Expedition, it’s not over til it’s over.

Unlike other modes, in Expeditions you don’t use any of the cards from your collection. Instead, you build a deck as you go with a series of picks and trades.

Every pick offers a different, random combination of champions, units, and spells. The cards in each pick are bundled together based on deck archetypes: You might select Disruption to add stuns and recalls to your arsenal, or Scrapheap for ways to cycle through your cards in search of the perfect play. There are over 20 archetypes to pick from, but over time you’ll create a strategy that’s entirely your own.

You start by choosing a couple of champions. As you continue drafting your deck, you’ll alternate between two types of picks: synergy and wild.

Synergy picks are based on the archetypes you chose previously; the cards in each pick are random, but they’re sure to work well with what you’ve drafted so far. 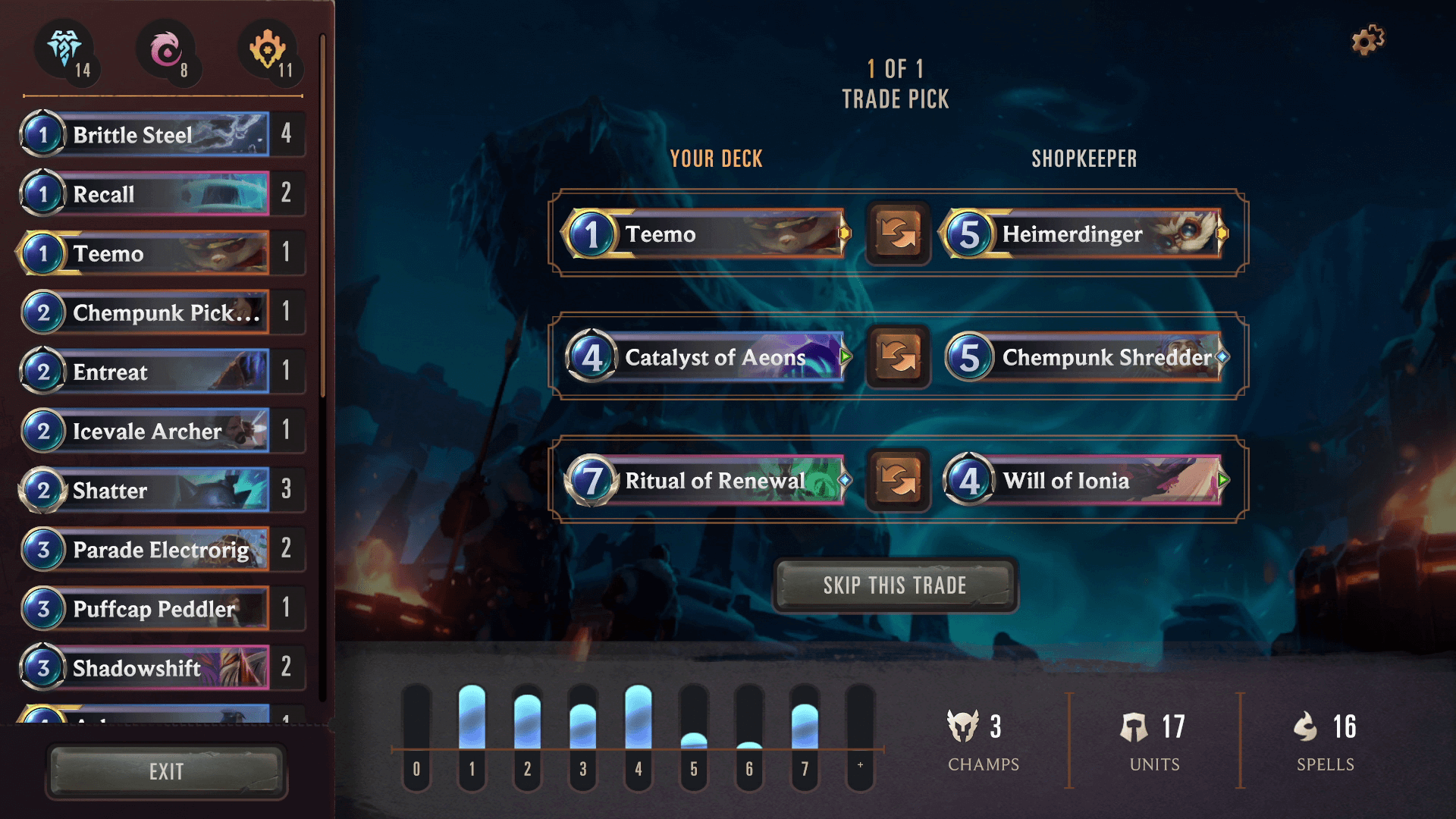 On the other hand, wild picks offer archetypes that may be totally different from what you’ve selected before. You might pick up a great option for enhancing what you already have, or change course after encountering an unexpected gem. You can even combine cards from three regions of Runeterra for a deck that can only be created in an Expedition. No matter what you choose during the initial draft, you’re guaranteed to come across more cards to support your strategy, but you’ll never know which ones you’ll find.

The draft doesn’t end when the matches begin.

After each match you get another chance to upgrade your deck, including additional champion picks to fill out your roster with more heavy hitters. But it’s the trade picks where your deckbuilding skill can really shine.

Trade what you have for what you need, refining your strategy with every swap. You can smooth out your mana curve, pick up some much needed spell support, or double down with multiple tried-and-true cards, even breaking the normal limit of 3 copies. You’ll continue to evolve and improve your deck all the way to the final match. 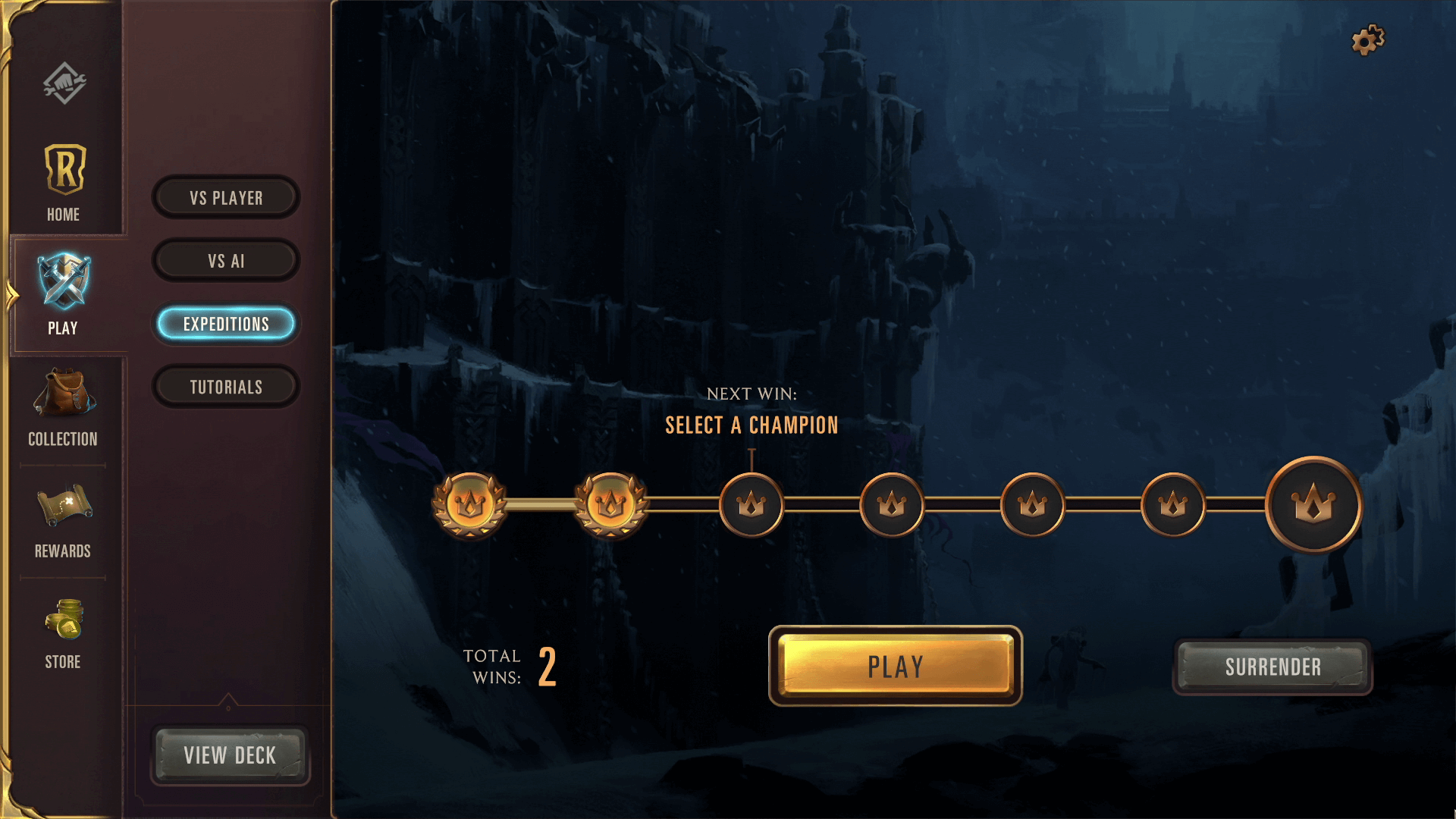 Your trial continues until you either win seven matches or lose two consecutive ones. Even if you fumble a match, one victory is all it takes to get back in the game. If you’re skilled enough to reach six wins, you’ll enter sudden death. The next match decides it all – will you get the coveted seventh win, or end your trial right then and there?

If your first trial doesn’t work out the way you want, don’t worry, every Expedition consists of two trials, and the better performance determines your rewards. That means you have an extra chance to make it to seven wins, or a free pass to try a completely wild strategy.

After you’ve completed both trials (or retired early), it’s time to collect your winnings. The rewards can be bountiful, and the more you win, the better they’ll be. No matter how you do, you’ll always receive at least one champion; but win enough matches, and your rewards can fully fund your next Expedition as well!

You can embark on three new Expeditions each week using Shards, Coins, or Expedition Tokens. After completing these, die-hard explorers who seek adventure purely for the experience can continue their trials in Open Play.

Whether it’s your first time drafting a deck or a glorious return to the seven-win Expedition, there are always more strategies to explore and another chance to claim victory. Pick your path, adapt your deck, and see how far you can go. 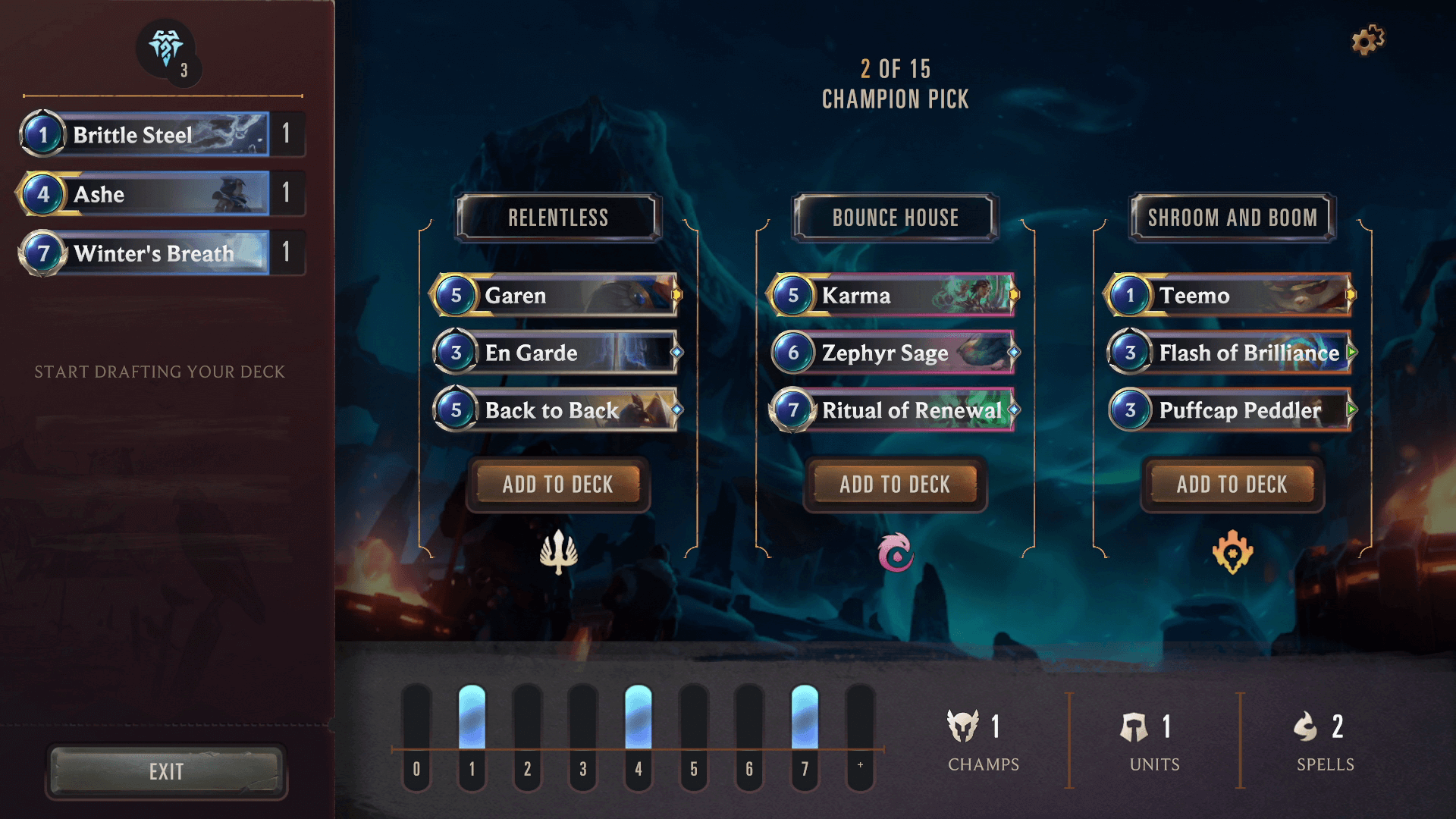 Draft mode is a great way to experiment with new strategies, some that you might never try otherwise, based on the different cards available to you each time. The downside is that it’s riskier than other formats, what happens if you get a weak selection of cards, or end a run early after an unfortunate loss at the beginning?

As with everything else in Legends of Runeterra, Riot Games have tried to keep what’s great and improve what’s not. Here’s a run down on what they came up with for Expeditions:

● Embark once, play twice. With two trials in every Expedition, you’re essentially playing two drafts every time. You can use it as a second chance after a bust, or an opportunity to build something crazy before try-harding your way to seven wins.

● Less stress losses. In a traditional draft, an early loss puts a crazy amount of pressure on you to not screw up. By changing it so a given trial ends after two consecutive losses, there’s a lot less stress and much more of a chance to continue on to victory.
● Strategic support. In other draft modes, the cards you get are completely arbitrary, which means you could work toward a cool strategy early, but then get no good options for it later. In Expeditions, the cards you encounter are still random, but if you start drafting a certain strategy early, you’re guaranteed to come across at least some options for it later as well. You’ll never know which cards you’ll get, but you’ll never be totally out
of luck either.
● Accessible & competitive. While we’ve made changes to make our version of drafting more accessible, it’s still a challenge for those that want to compete. Sudden death means seven wins is a real accomplishment (less than 10% of players will succeed). And of course, there’s the potential to combine three regions in your deck, compared to two in a normal game. We don’t want to give anything away, but we’re excited to see what new combinations you come up with.

To sum it up, Expeditions is a great mode for players who want to try out new regions, champions, and strategies in a real game without committing to unlocking them. It’s also a great way to challenge a different set of skills, especially your ability to adapt and evolve a deck over time. Whether you’re just starting out or simply looking for something fresh, each draft is a chance to explore Legends of Runeterra in a totally new way.

What else has changed since the last preview patch?

● As a thank you for playing this preview patch, Riot Games are giving a ton of bonus wildcards up front to help jump-start your deckbuilding experience (if you were in the first preview patch, you’ve already received these).

● They are also giving you an Expedition Token and 8000 Shards, so you can play all three Expeditions for free during this preview patch!

Legends of Runeterra is set to release its full version as soon as the developers have landed on an exact date for launch, but you can pre-register right now on both PC and mobile.

Pre-registering on PC gives you a chance to play in the closed beta on PC in early 2020, as well as during this preview patch right now.