And I tend to agree.

For a motorcyclist, there’s absolutely no comparison to be made between driving a car at breakneck speed and the absolute thrill of riding a motorbike at full throttle.

They are two very different animals. 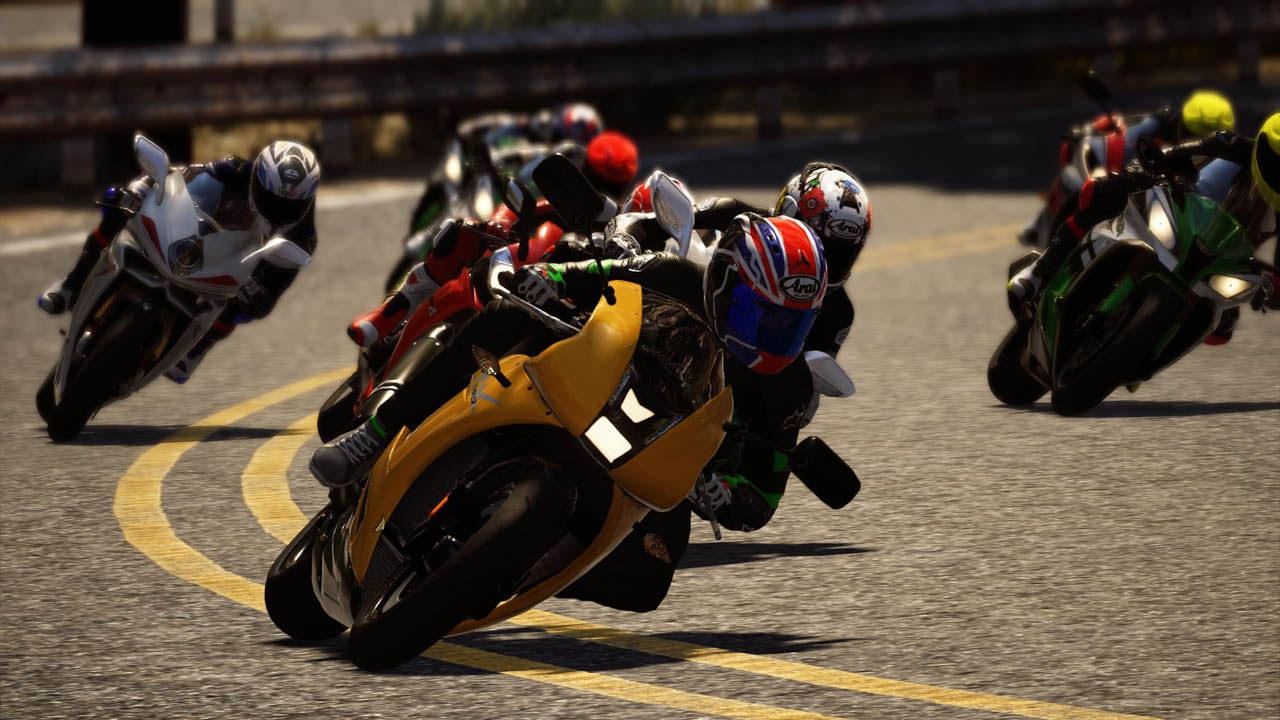 Whereas a driver simply controls his car using pedals and a steering wheel, a motorcycle becomes an extension of its rider. The motorcyclist’s whole body influences the machine not just his hands and feet.

It’s a strange symbiotic relationship between man and machine that is very hard to explain, and even harder to translate into a video game.

That’s probably why car racing games are ten a penny and you can count the amount of motorbike racing franchises on one hand. And, most of those motorcycle racing franchises come from one stable- Italian developers Milestone S.r.l.

Following on from their hugely successful MotoGP games, Milestone’s Ride sets out to do for motorcycling what the Forza and Gran Turismo games have done for car racing; they want to provide gamers with their own motorcycle racing simulator.

And, by and large, they have succeeded.

Unlike many of its adrenaline fueled peers, Ride’s presentation doesn’t do much, initially, to inspire much confidence in the game. 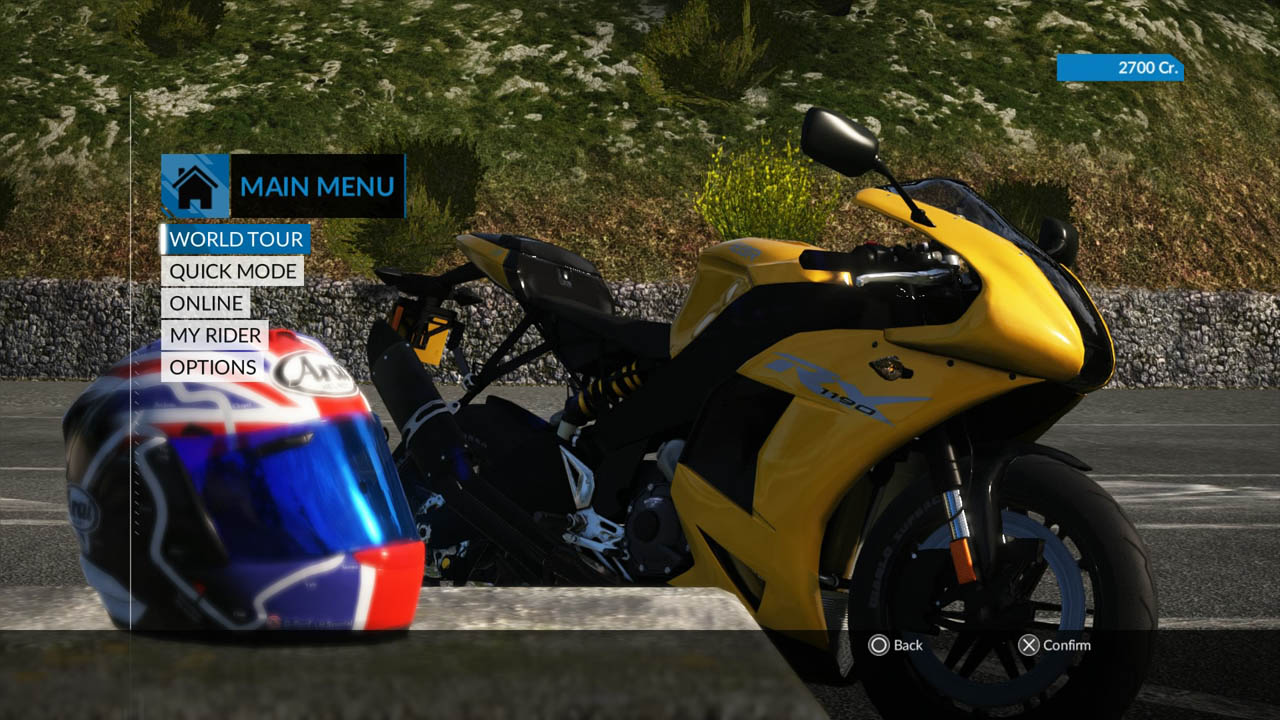 It’s introduced by an Englishman waffling on about some deep meaningful stuff. It’s well-written and well-enunciated.

But I didn’t come for a Shakespeare reading. As educational as the voice-over guy is, he’s no Jeremy Clarkson and instead offers up a pretty dry and uninspiring introduction to the game that’ll either put you to sleep or make you consider saving yourself some time and returning the game to EB Games without playing it.

To be honest, the game’s presentation is a bit ropey, even worse I’d say than the same developer’s MotoGP 14. But, it seems, unlike many a polished AAA turd, the developers have spent the money on the gameplay and not the fancy intro and testosterone soaked announcers. 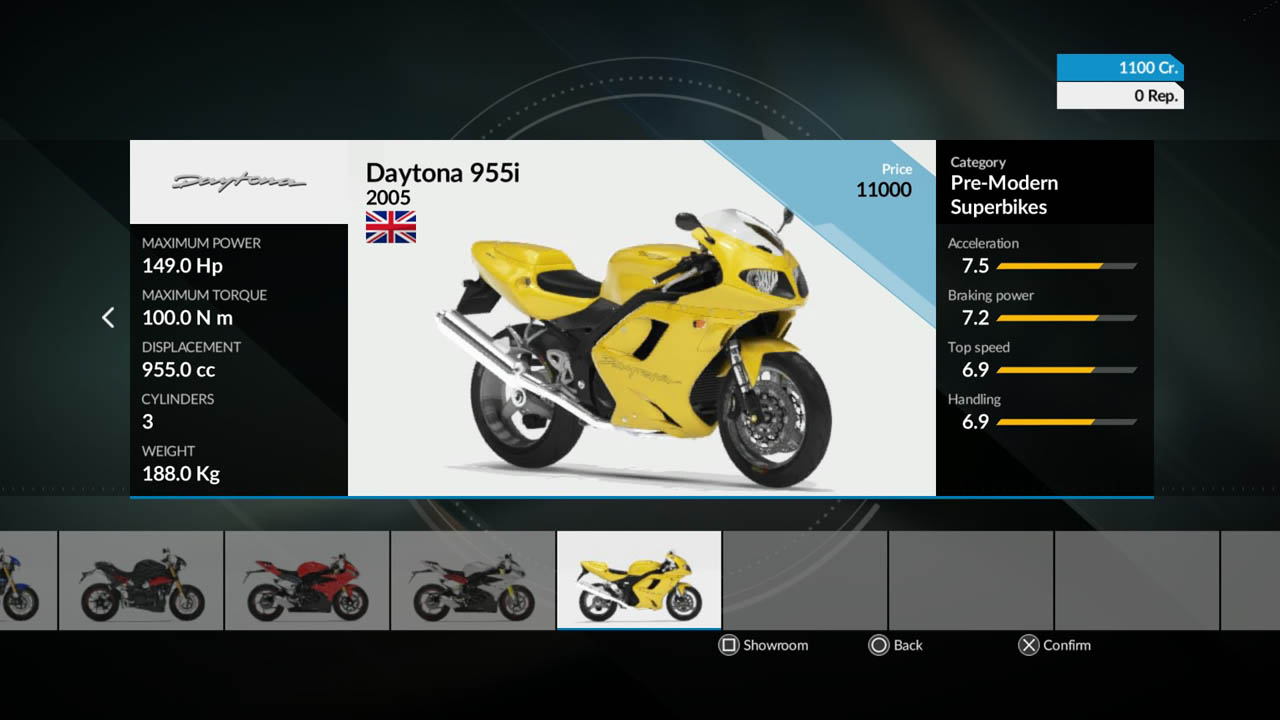 Let’s start with the bikes. There’s over 100 licenced motorcycles in the game ranging from 80’s classics to 2015 models. Each bike has been meticulously modeled to create beautiful virtual reproductions of some of the world’s best superbikes.

I found myself getting all blurry eyed over the game’s beautifully modeled 1986 Yamaha FZR750- my dream bike back in the day, and the 2014 Kwacker Ninja ZX10R, the bike that I’d buy now if I still had the bottle to hit the road at breakneck speed on two wheels. 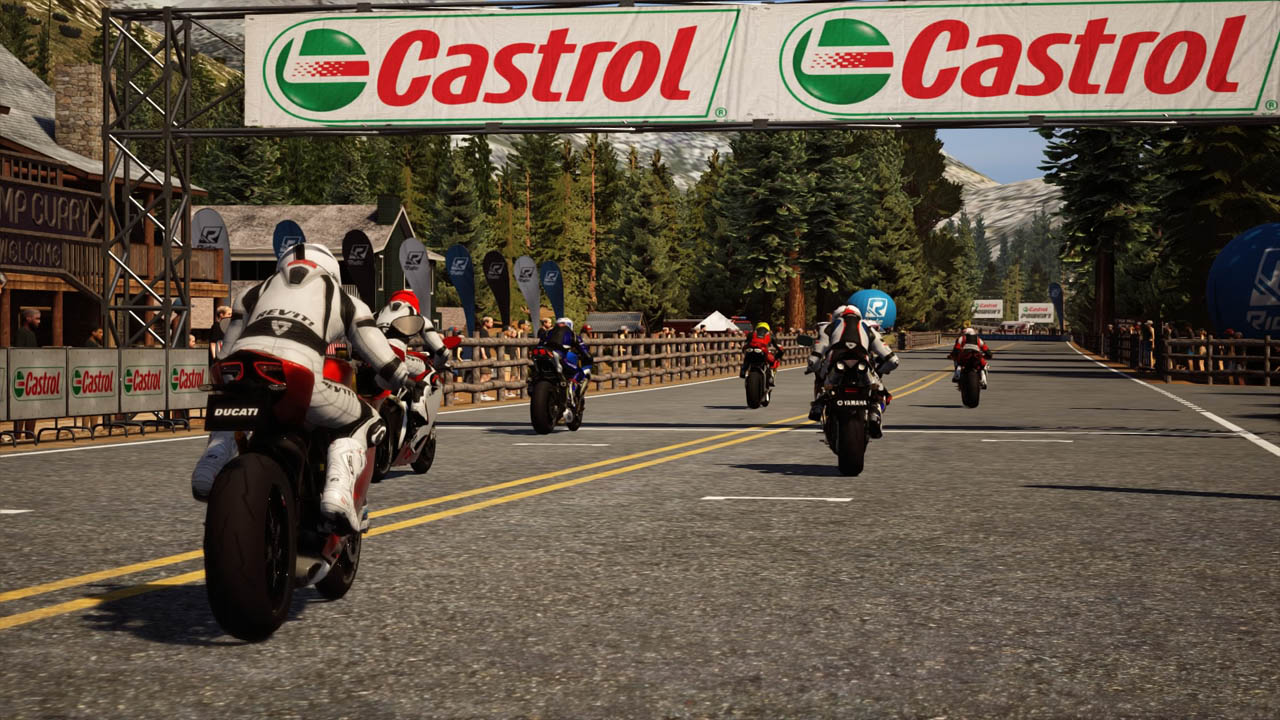 As well as licensed machines from all the big manufacturers, including an electric bike from Lightening, the game features hundreds of licenced performance upgrade parts from the likes of Arrow Exhausts, D.I.D and Pirelli.

The game also allows players to kit their rider out in style with helmets from Shoei, Arai and AGV, boots from Sidi, some Alpinestars gloves and a number of cool-looking Dainese jackets.

You can easily waste a lot of time swapping parts to get the best out of your machines. Even if you are not technically minded, you can still spend an awfully long time kitting out your rider to ensure that they are both stylish and coordinating with their bike. 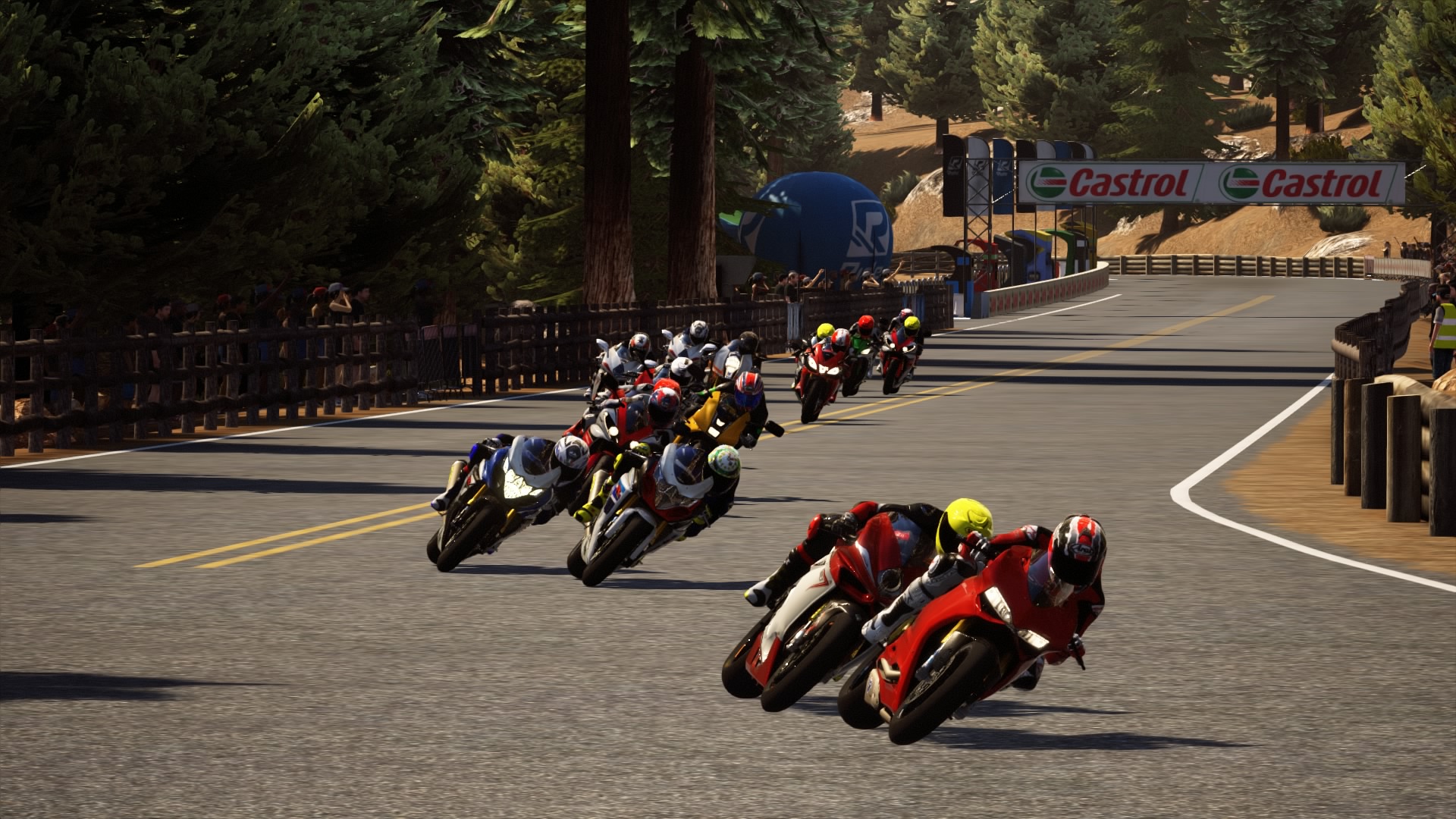 Whilst the bikes are well modeled and rider animations fluid, the general level of graphical fidelity is shockingly average.

It’s clear that Ride is another of those awkward cross-gen titles granting current-gen console owners a higher resolution, more stable framerate but little else over their last-gen brethren.

The lighting, for instance, is very old school. None of the environments can hold a light to the likes of Forza Horizon 2 or Driveclub.

But, as I alluded to earlier, thankfully it’s not all about graphics and presentation.

This is a game about riding a bike and the developers, Milestone, are about the best studio in the world when it comes to digital simulating the subtle art of motorcycle racing.

Fans of the genre will know that it is Milestone that have practically dominated motorcycle racing games for well over a decade. 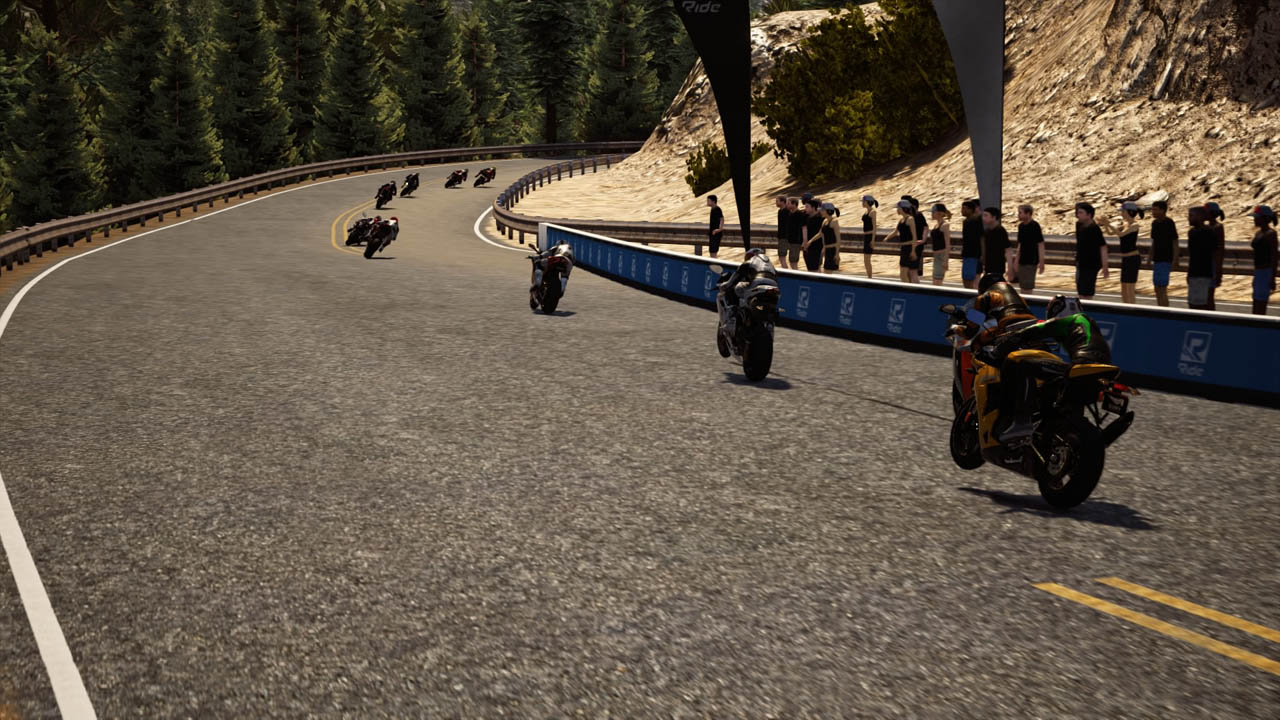 Their MotoGP games are generally well-received, but often suffering from the same sub-par presentation problems that somewhat mar Ride.

This time, in moving away from the constraints of the MotoGP licence they have been able to add more motorcycle variations and some more interesting circuits.

The game ships with fifteen circuits ranging from dramatic fantasy tracks based on the landscapes of Sierra Nevada, North Wales and the French Riviera to classic motorcycle racing circuits like Donnington and Magny-Cours, via street-racing circuits set in Miami and Milan. There’s something for everyone.

Unlike MotoGP where players are committed to a world championship, there’s no structured campaign in Ride. Instead it’s all about all about prize money and reputation. The more money and wins the more bikes become available to buy. No matter what you do in the game you advance your rider.

And there’s plenty to do. 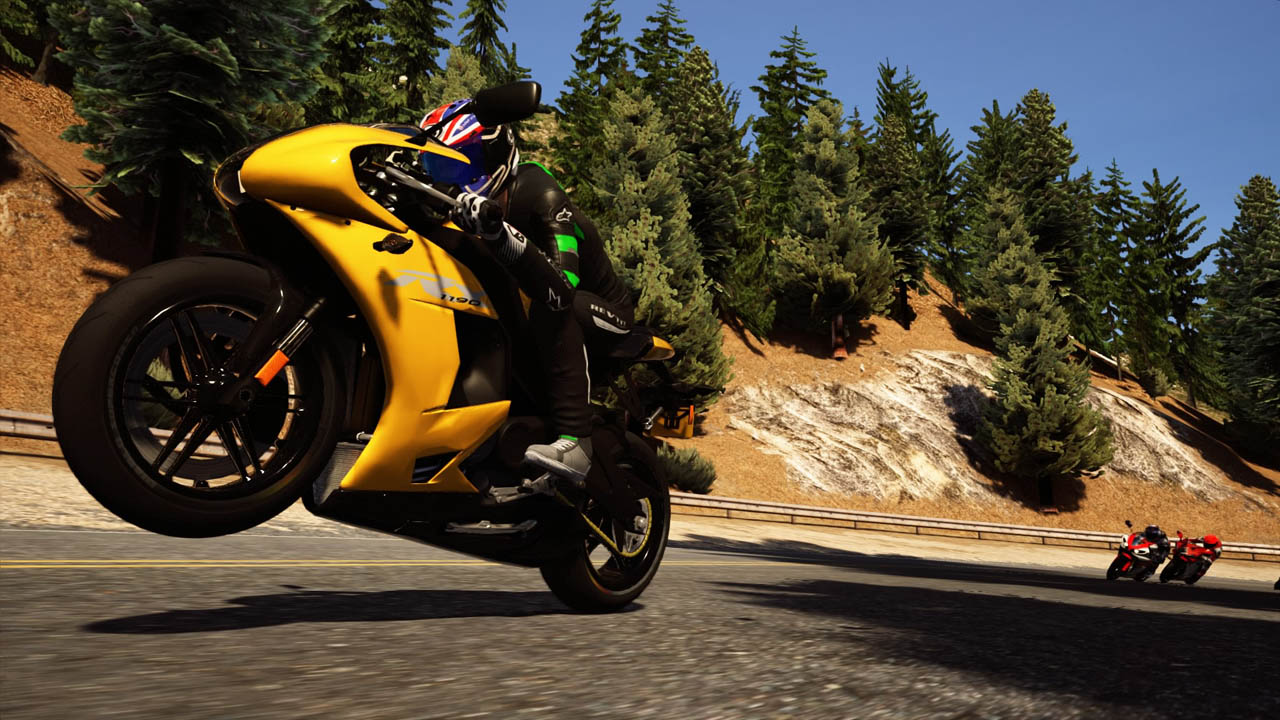 The menu at the start gives you plenty of ways in which to embark on your motorcycle racing career. There’s a choice of World Tour, Quick Mode, Online, as well as some customisation in My Rider and the game options.

To get right into the thick of it, World Tour grants access to a series of World Tour Events tailored to certain categories of bike based on engine capacity, type, age and manufacturer.

Most are a series of single races that can be undertaken at the player’s leisure, but there’s a few multi-race championships thrown in there as well.

The World Tour mode also has a series of unlockable Elite Trophy races for big cash and new bike prizes. These races become available chronologically one you start climbing the game’s world rankings.

It’s in this section where players buy new bikes, customise them with after-market parts and view their collection. Players can also pick the My Rider option to kit out their rider and the use the Teammates page to select a teammate from the AI driver list or pick a Ride owning friend. 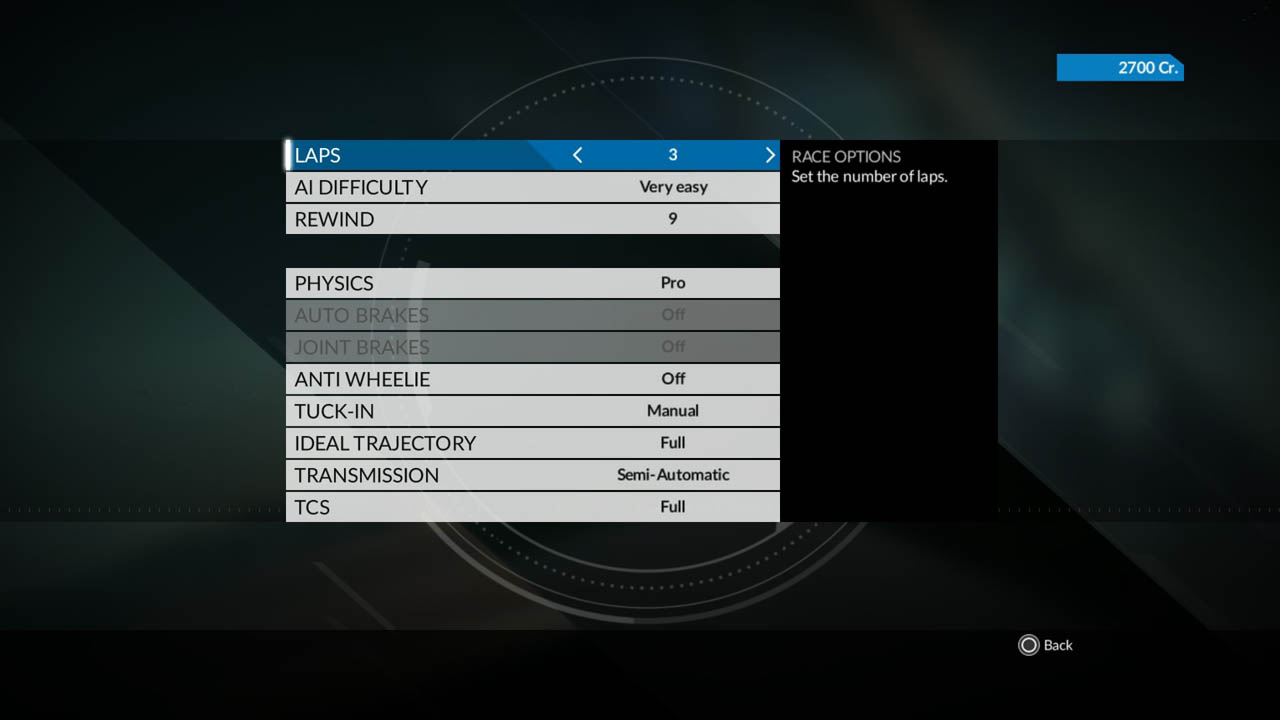 The Online option allows players to quickly get into a multiplayer race with up to eleven other racers or create an online race themselves.

It’s only after having experienced an online race that you realise just how kamikaze the AI opponents are. Real players are a lot more careful on corners and when overtaking whilst the AI seems to rigidly stick to the racing line.

If time is short and you can’t afford to mess about, Quick Mode gets you straight in there without any fuss. Either for a Quick Race, using any bike (you can even rent a bike that you don’t own) on the track of your choice, or a few laps of Time Trial.

The glaring omission is the inability to choose the weather and time of day for your race.

It’s here in Quick Mode that you can also set up a split-screen race with a friend, opening up all sorts of opportunities for couch competitions.

There’s also a tutorial option to help players get to grips with the controls, which are a bit more complicated than those of a car racing game. 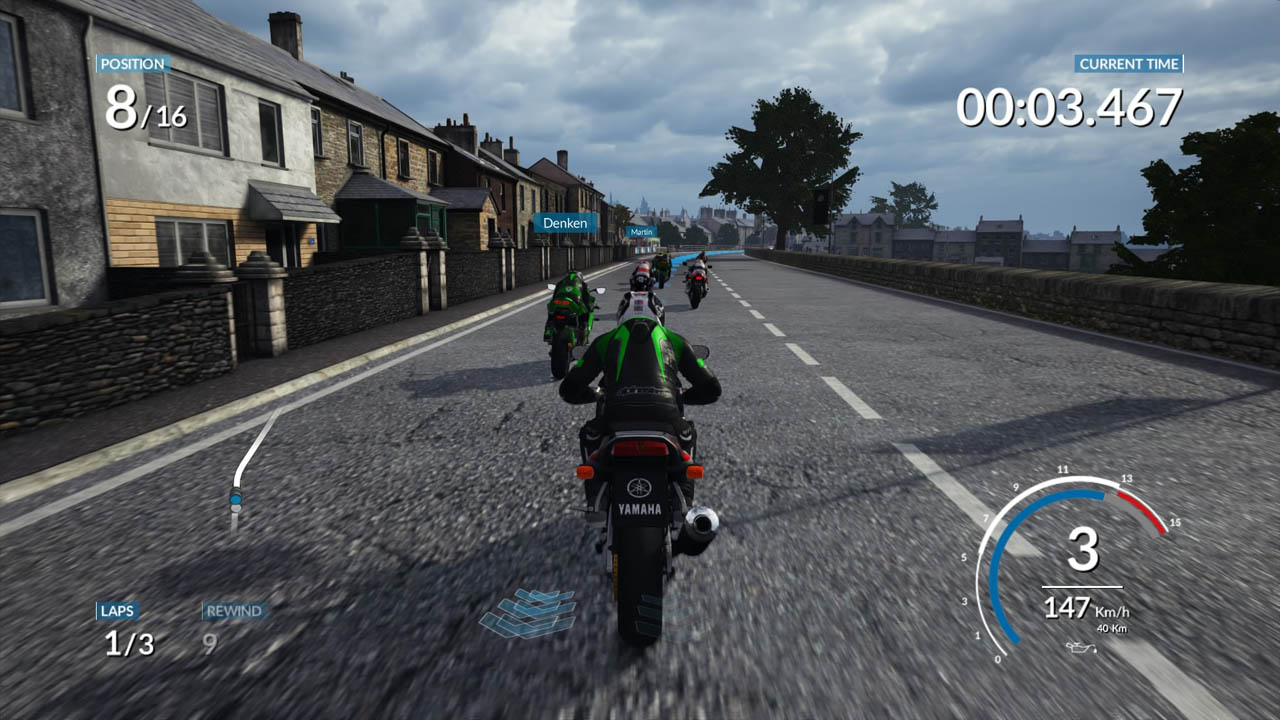 Ride is not an easy game to get into for the novice.

The steering is very sensitive compared to car racing games. I’d even goes as far to say it feels a little too sensitive sometimes.

Leaning or braking too much will send your rider sliding down the road, as will hitting anything, including other riders.

Throttle up too quickly and you’ll likely do an impressive, but usually catastrophic, wheelie. Same goes for applying too much front brake, if you’ve got independent braking switched on; stoppies are cool, but not on the race track.

The game has a rather steep learning curve that can be off-putting at first. But, in my opinion Ride is as unforgiving as a motorcycle sim should be; if it were any easier you may as well be playing a car racing game.

In saying that, Ride has all the usual aids you would expect in a racer, such as racing line and auto-braking, but it is best played with as little help as possible.

In fact, part from the racing line and automatic gears, I’d recommend switching off any help as soon as you can. 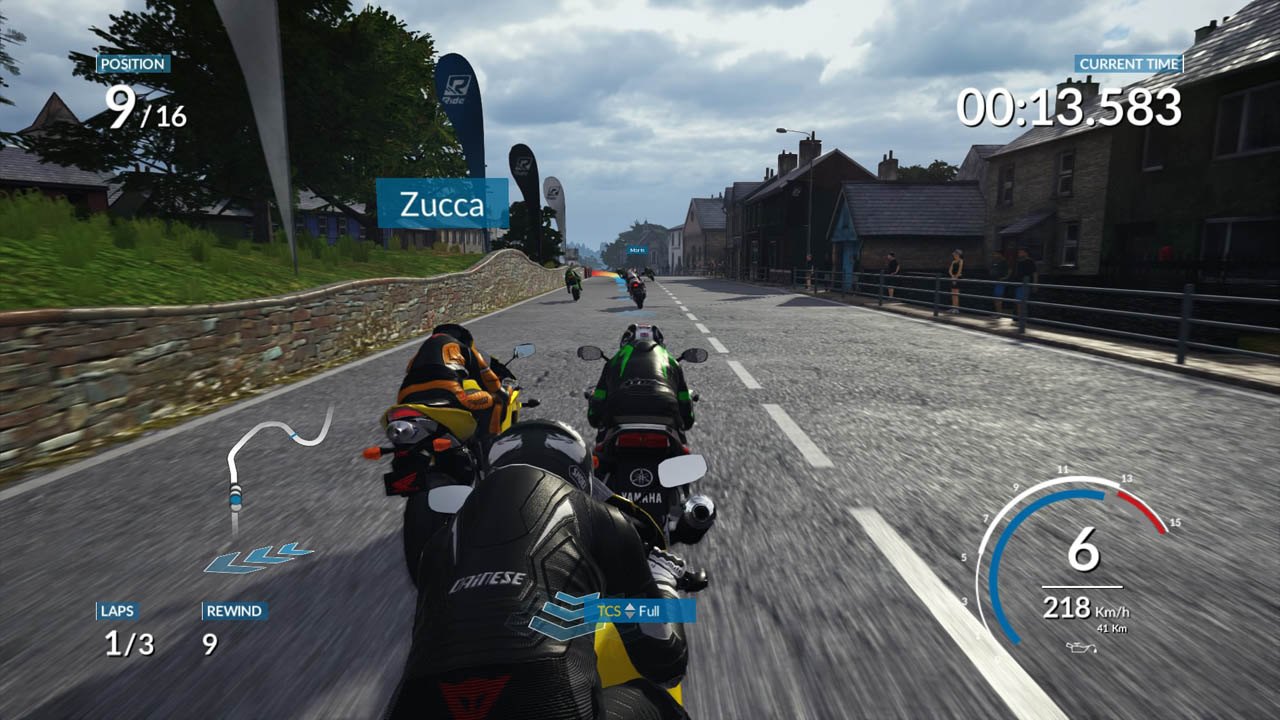 Sure, you will crash a lot, but once you’ve got the idea that you can’t ride everywhere at full throttle things get easier. Even then, if you have any momentary lapses, you can always hit the rewind button, unless you’ve gone totally hardcore and switched them off as well.

Ride gives players an extraordinary amount of control to the player.

Throttle and steering are a no-brainer, but there’s also front AND rear brakes as well. You can also shift the rider’s weight forward and backwards and tuck-in low on the tank to lessen drag and increase speed.

A great addition, which I’d like to see in other racers, is the semi-automatic gears as standard. This allows players to dabble with changing gears at their leisure. Learning good use of the gears is essential to aid speed reduction and to quickly power away from opponents.

Loads of beautiful motorcycles, some great circuits and a very comprehensive, yet intuitive control system round off a great motorcycle racing experience. 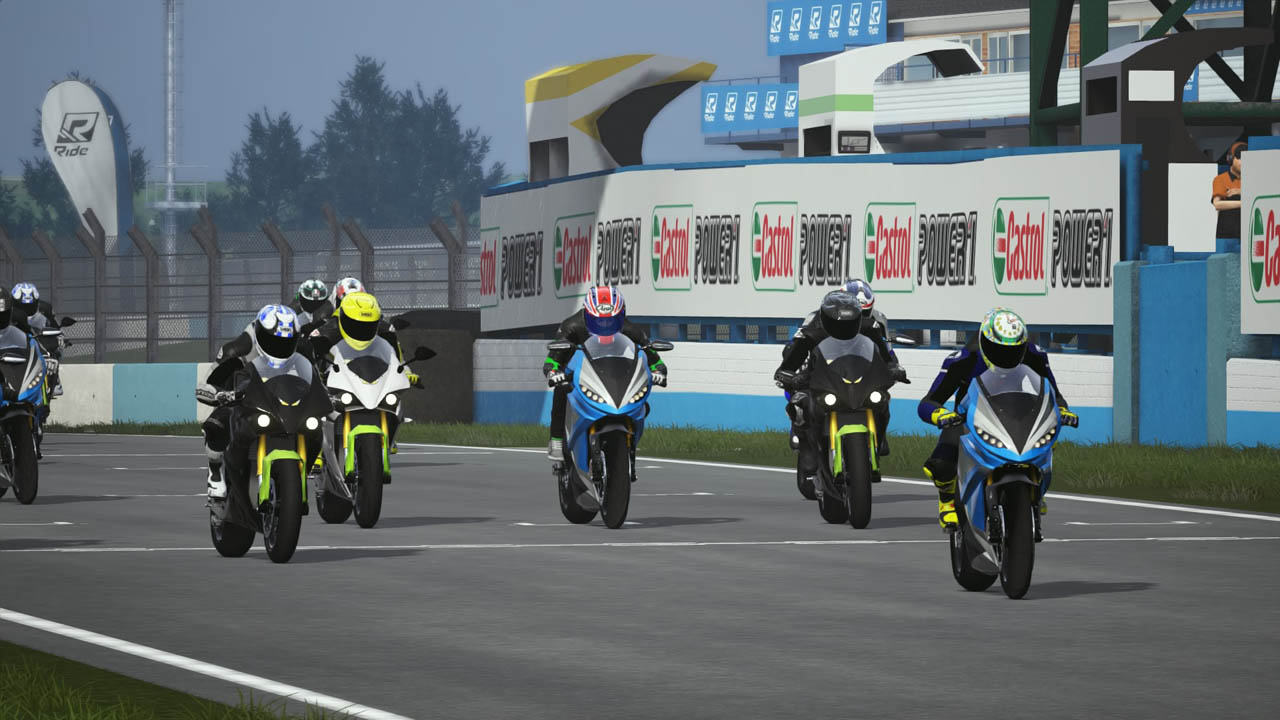 Ride isn’t an easy game to master, but is still very accommodating. Allowing players to get to grips with it at their own pace. It is at its best when played with all the riding aids off, but it may take some time to get proficient enough to play it that way.

The graphics are a bit disappointing for a PS4, especially compared to other current-gen racers and the lack of weather and time of day options is a bit of a shame.

But this is a cross-gen game, and when negotiating hair-pin turns on some of the world’s most powerful motorcycles eying up the scenery is going to be the last thing on your mind.

Despite being somewhat rough around the edges, at its heart, Ride is a very competent and thrilling simulation of motorcycle racing.