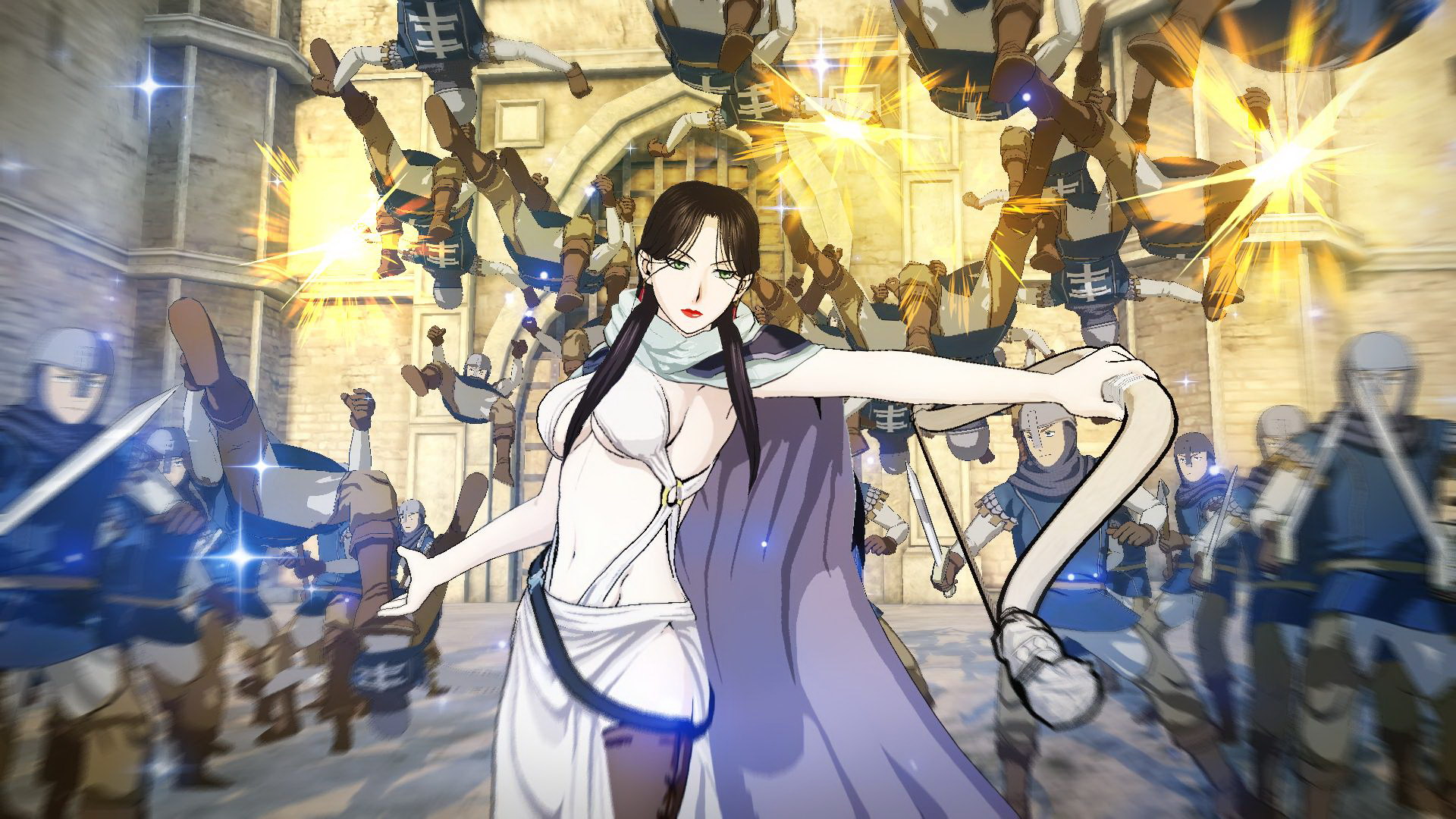 Omega Force is back yet again to bring another tale to their ever growing Warriors meta-series with Arslan: The Warriors of Legend. Based on the Japanese fantasy novel series, The Heroic Legend of Arslan, this new entry manages to both stay true to the typical Warriors gameplay while changing the formula enough to not feel like a simple reskinning.

When talking about the game, it is hard not to compare it to other entries into the Warriors series. The biggest standout in this entry is on the excellent execution of the story-telling which shines through in both the gameplay and the cutscenes. In comparison to other Warriors games, Arslan: The Warriors of Legend does lack the variety in content and also a driver to replay the same content again and again. While there is the basic Free Mode and Online Mode, the entire game is geared towards the single story. 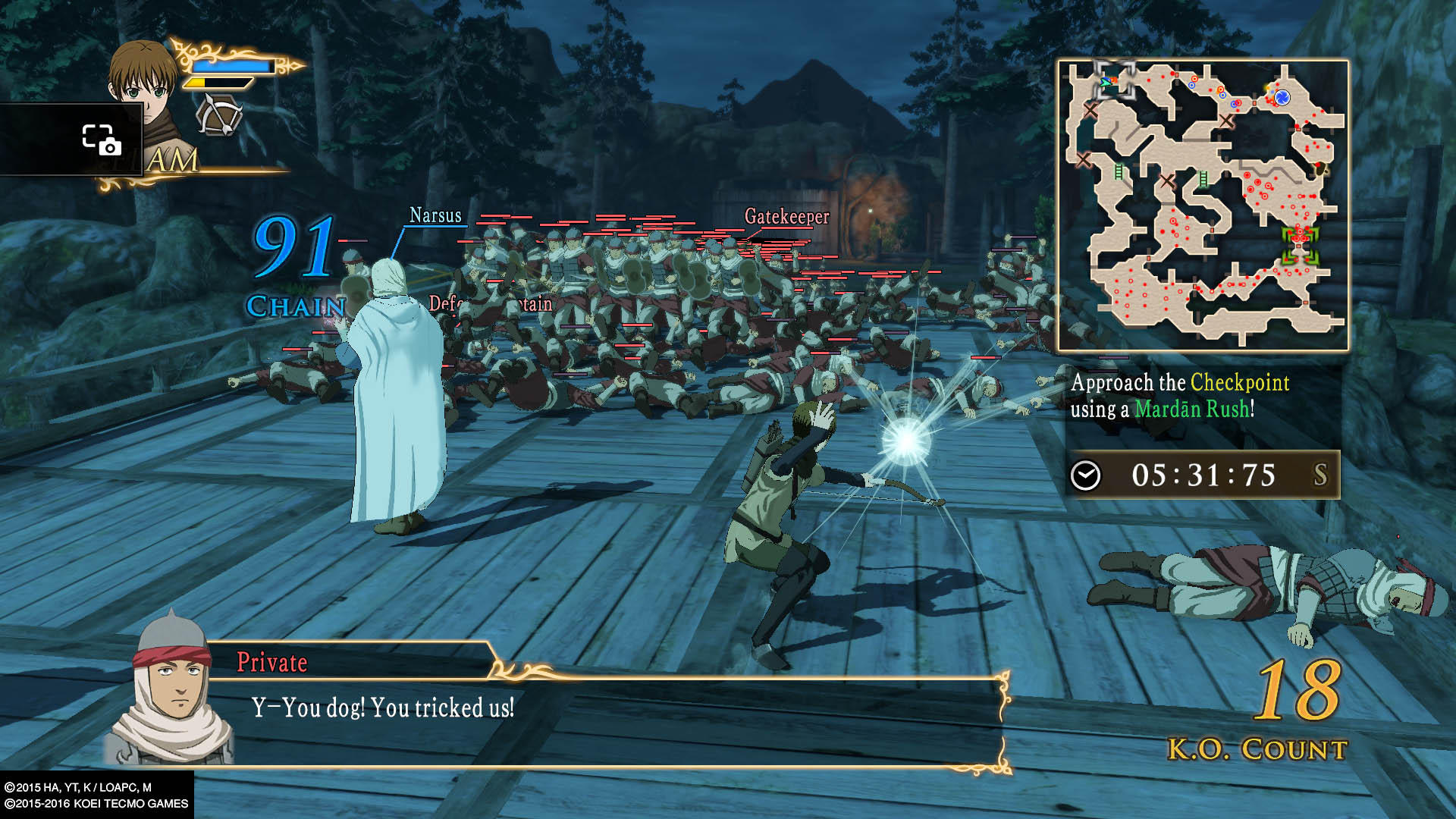 The story is excellent with my only disappointment being the ending which paves the way for a sequel rather than concluding the tale it has begun. While obviously there is a much bigger story to tell, the end of the game seemed somewhat arbitrary to the overall story.

The main protagonist in this story is Arslan, young crown prince of the kingdom of Pars. During a crushing defeat in a battle to defend the kingdom, Arslan along with his loyal companion Daryun find themselves isolated from the rest of their forces. With his kingdom occupied and no army at his command, Arslan must somehow find a way to save Pars.

While the story is engaging, it is the various characters that you meet along the journey that make this tale so memorable. The complexities of the character’s backstories and motivations which drive their actions betrays the fact that the source of this story is from a novel. Due to Arslan’s well portrayed caring nature, I found myself sympathetic to his cause and consequently more engrossed in the story.

The story isn’t just restricted to the cutscenes though, it is also woven into the actual gameplay. First of all, you don’t choose your character, instead you play as the character who is undertaking the most critical task which rotates throughout a battle. As a result, the battle unfolds in a manner that much more resembles a story with various characters participating and acting in a certain way. It also made me warm up to more characters by giving them all their own time in the spotlight for their personalities to shine through. 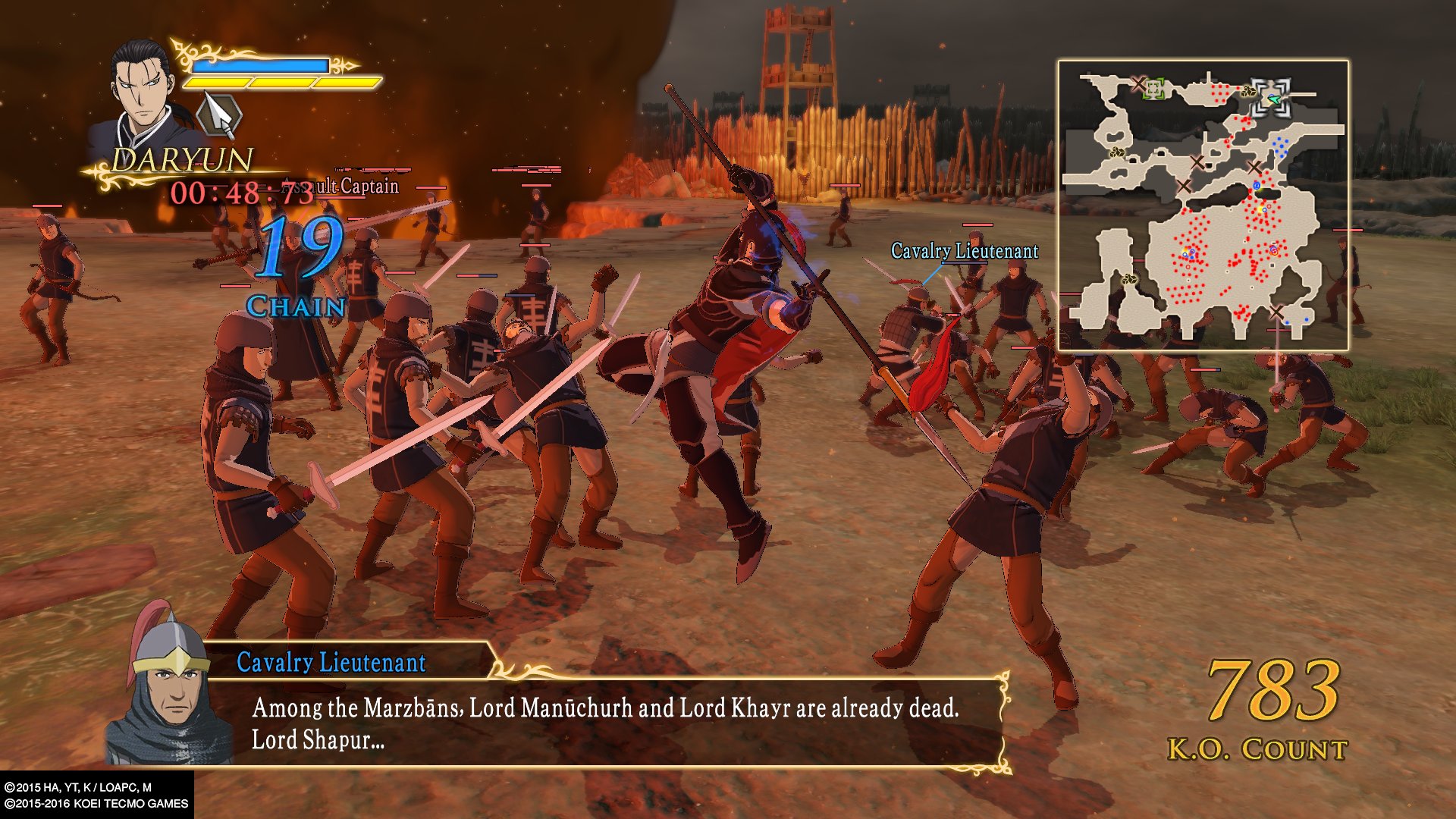 Another way in which the gameplay and story are further integrated is through the ranking of performance in missions. The battles themselves are broken down into numerous sub-missions which drives the flow of battles. Your performance while undertaking the objectives is ranked based on certain criteria. This encourages you to play in a certain way which in turn makes the battles take place in a fashion that suits the story that unfolds. Seeing a short timer stressfully ticking down on a what they determine to be a time-critical mission s a surefire way to ensure I don’t get distracted on my way.

Based on the rank you achieve, you are given a Skill Card which have difference effects such as increasing attack or giving a certain temporary boost for every 100 enemies defeated. You can equip up to three of these cards at a time. While I ended up with a seemingly endless list of Skill Cards towards the end of the game, I was still motivated to try and get a get the best ranking I could in the hope I unlocked a new awesome card. 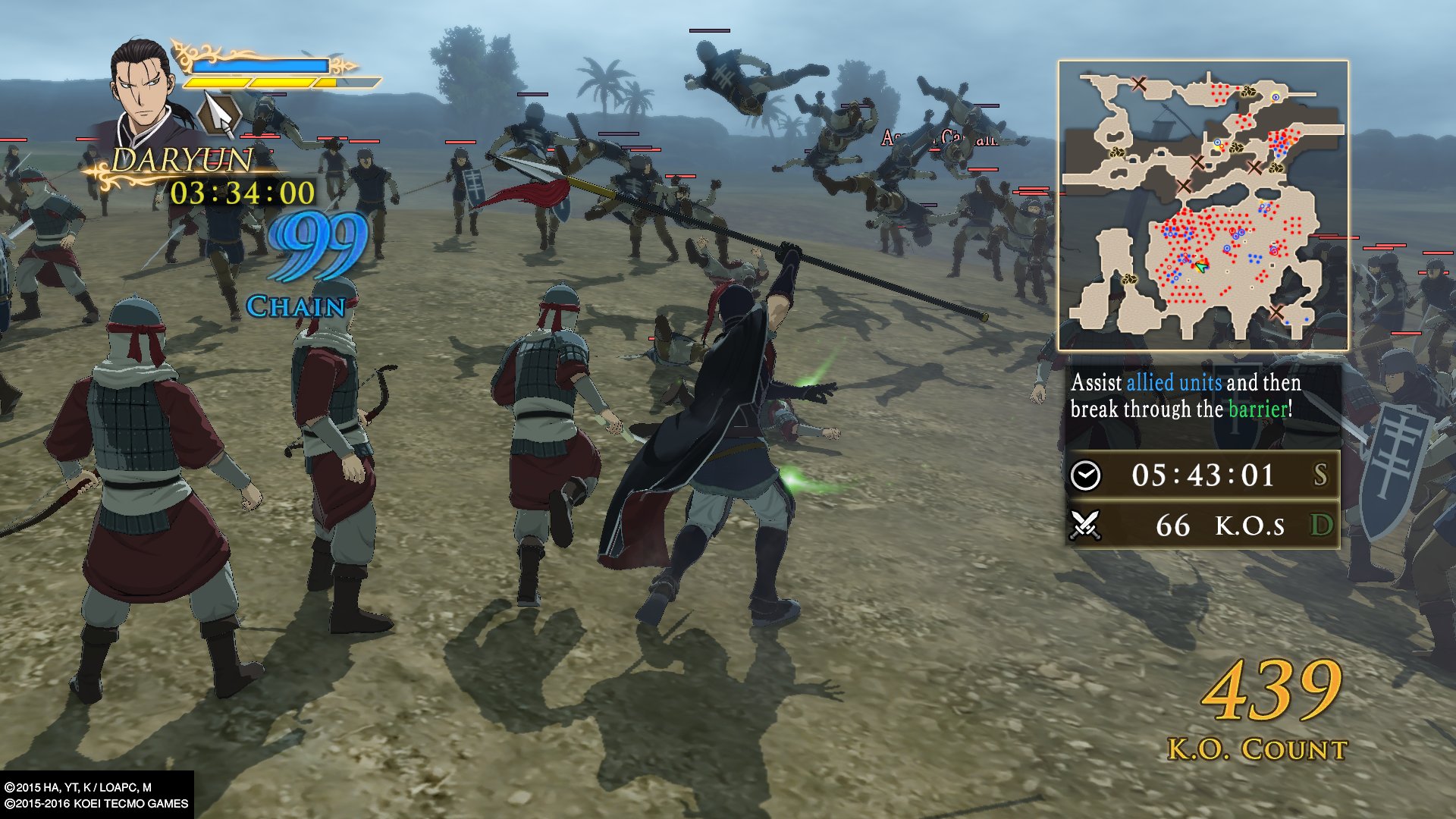 Outside of this, the gameplay will be familiar to any who have played a Warriors game before. You play as one of a few overpowered characters on a battlefield with thousands of seemingly braindead soldiers. You easily button mash your way to hundreds and possibly thousands of kills each battle. Enemy officers give you a bit more trouble by actually fighting back and dealing considerable damage.

My major criticism with the gameplay is that blocking is not very responsive. You can’t quickly go from an attack to a block. Instead of transitioning into a block once pressed, your character will continue to not only finish their attach but also launch new attacks based on the buttons you previously pressed. As a result, you have to plan a block well in advance of actually needing to do so. This isn’t an issue most of the time though as an all attack strategy will work fine for the vast majority of enemies you fight. 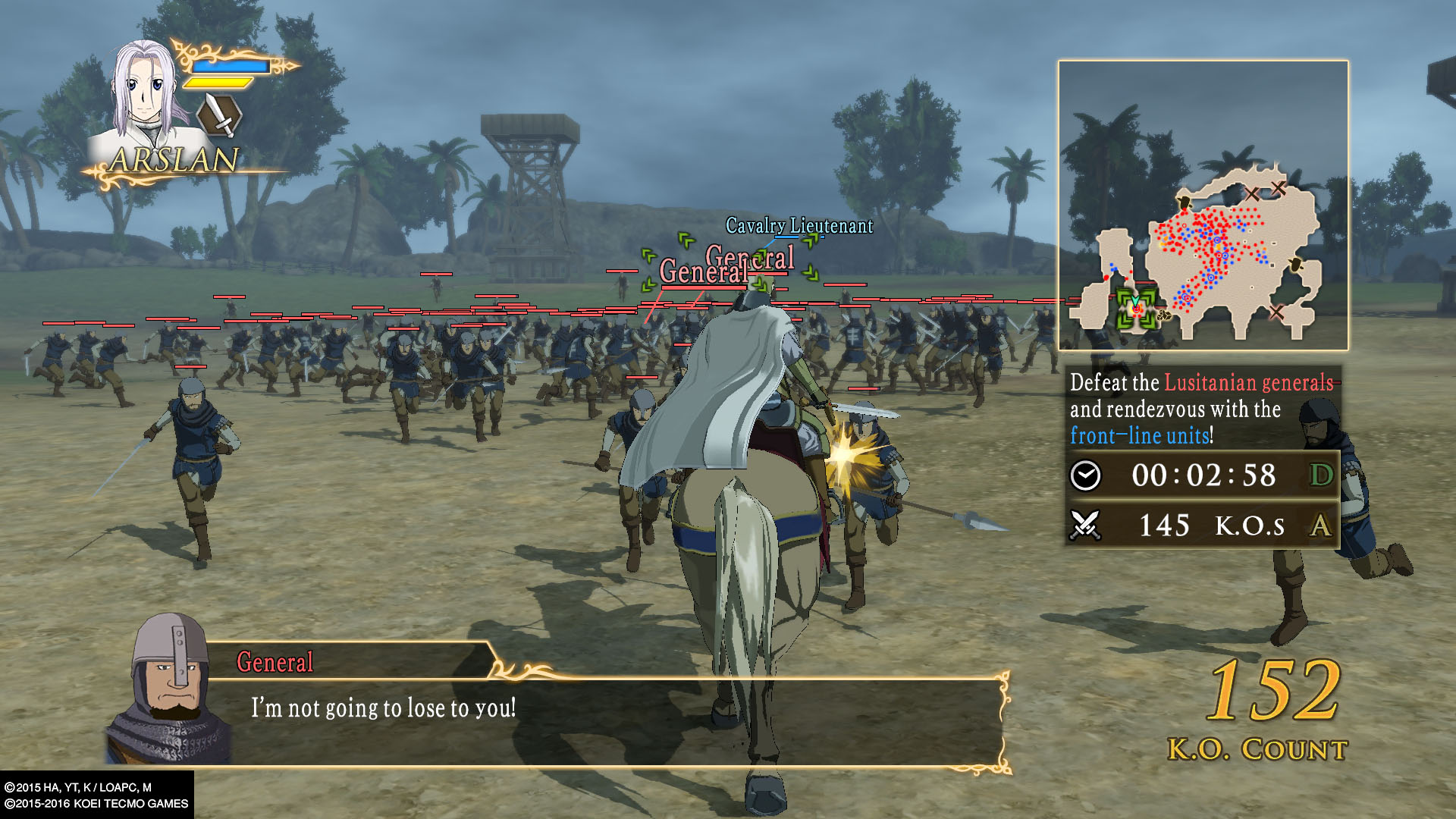 It isn’t just the gameplay and story that Arslan: The Warriors of Legend does well. The game also features a gorgeous visual style and an excellent sound track. One thing that may turn people off though is that the voice acting is in Japanese with English subtitles. Having gotten used to this sort of thing over the years, it wasn’t an issue at all for me.

Arslan: The Warriors of Legend is a solid entry into the Warriors series. Featuring an impressive story and Warriors styled gameplay, the game is a worthy look at for any fan of Omega Force’s other titles. While the single story to play through is engaging, there is little motivation to go back to the game when the credits eventually do role.