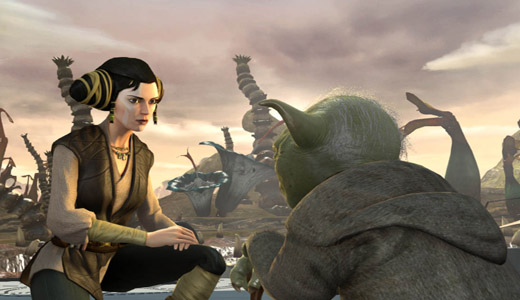 I am a huge fan of Kinect.

Originally abit of a nay-sayer, being old school and preferring the ole controller and button mashing. 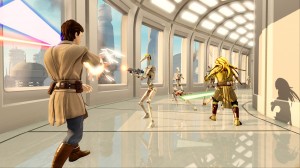 As titles came out that incorporated the Kinect unit it was inevitable that I would have to adopt and conform to the future of home console gaming.

The latest and probably greatest (asides from Fruit Ninja available as a DLC or bundled with Gun Stringer) is Kinect Star Wars.

You begin as a rookie of one of many of the available Star Wars species, training to become a true Jedi.

As you stand in front of your tele the Kinect sensor will pick up your Left and Right arm gestures, as the game requires.

After a brief tutorial, you embark on a Jedi initiation like never experienced before.

Wielding your lightsaber does take some skill and not much precision. Flap your arms about in game directed moves in order to strike and attack or defend.

Stepping forward causes you to dash and crouching, is well, crouching.

Instructed by Yoda himself and 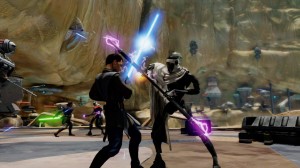 Obi Wan among others, the game’s story is driven by C3-PO and R2D2 accessing memory archives, which reflects the gone era of your days of training and building your character up.

The sensor is fairly forgiving, in the sense that you do not need to be too precise with your movements, which is great for novices and those with terrible co-ordination, like me.

Asides from the main story, Pod Racing is another game Mode, and I actually preferred this more.

Control an auto accelerating pod in an all out death race against other unruly racers. Control the pod by tilting your body left and right to turn and you also need to ‘hold’ onto the virtual control panel. 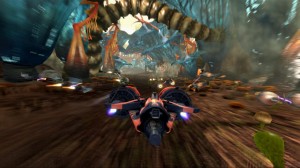 Eventually you will be taking on Speeder Bikes and more gruntier Pods.

Multiplayer allows another player to jump into play seamlessly at any time and jump out again at any time by being in front of the Kinect sensor.

As always, may the Force be with you.