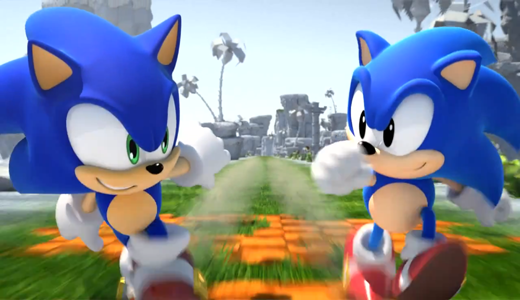 Yea okay, I am a Sonic fan from waaaaaay back.

So yea, just a  warning, as this review might be already slanted in Sonic’s favour. 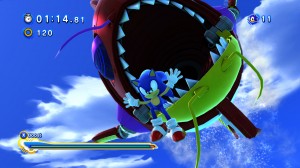 Over the years, Sonic titles have gone from 2D side scroll to 3D free-to-roam to a mashup of 2D and 3D,   linear to not so linear.

One thing that has remained constant (and caused a bit of controversy in the 1990’s) is the blinding speed that the game can play at.

Generations is no different in that respect.

It also features a mix n match of side scroll and path freedom.

For the first time, old Sonic and new Sonic (I hadn’t actually even noticed that he had changed over the years) are placed together within the same world, as old reminiscent Levels, like Green Hills, Chemical Plant, Seaside Hill and Casino are re-conquered along with a few others.

To get through each Zone with its varying Levels you need to switch between Sonics.

Each Sonic has their own specific Levels in which you can only use them in.

Playing as old Sonic (shorter and 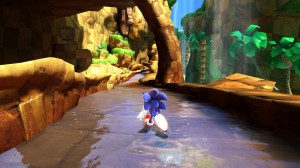 more cartoony looking) ensures retro gameplay by way of two dimensional side scroll platforming whilst new Sonic (taller and angrier looking) is mostly from behind the character aspect across a more three dimensional round with grinding and sliding.

Each differing Sonic have their own respective abilities.

In this chapter of the ever evolving franchise, Sonic has just returned from a battle against Eggman (aka Dr. Robotnik) from Sonic Colours and his pals have slapped together a surprise Birthday party.

Whilst in the throes of festivities, a Time Eating dark Monster appears in the sky and kidnaps all of Sonics buddies.

The time warping beast has also gone back in time and taken the original Sonic from 15 years ago.

Both Sonics need to work together to rescue his friends from all of the past Zones that have ever been popular in the series; over ten Zones each with two to three or more various Levels. 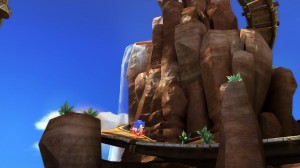 All Zones are entered through a frozen world where new Sonic awakens within after being knocked out by the Time Monster.

All the characters that have ever been in the series are featured, Knuckles (was my favourite in the 90’s, Tales (still not sure if he is a he or a she) and more.

There are a handful of Boss Levels and also DLC to keep gameplay fresh and continuous.

Sadly, no Multiplayer though. It would have been a great idea to be able to pit old Sonic off against new Sonic in races or battles. SEGA obviously though otherwise and excluded any other real world competitions in gameplay.

Best played on PS3, if 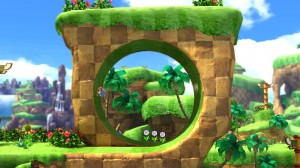 you have a 3D tele, there’s nothing like crazy fast gameplay in Stereoscopic 3D to make you feel disorientated. Excellent. Or of course glasses free 3D on the Nintendo 3DS.

Sonic Generations is pure nostalgia at its finest.