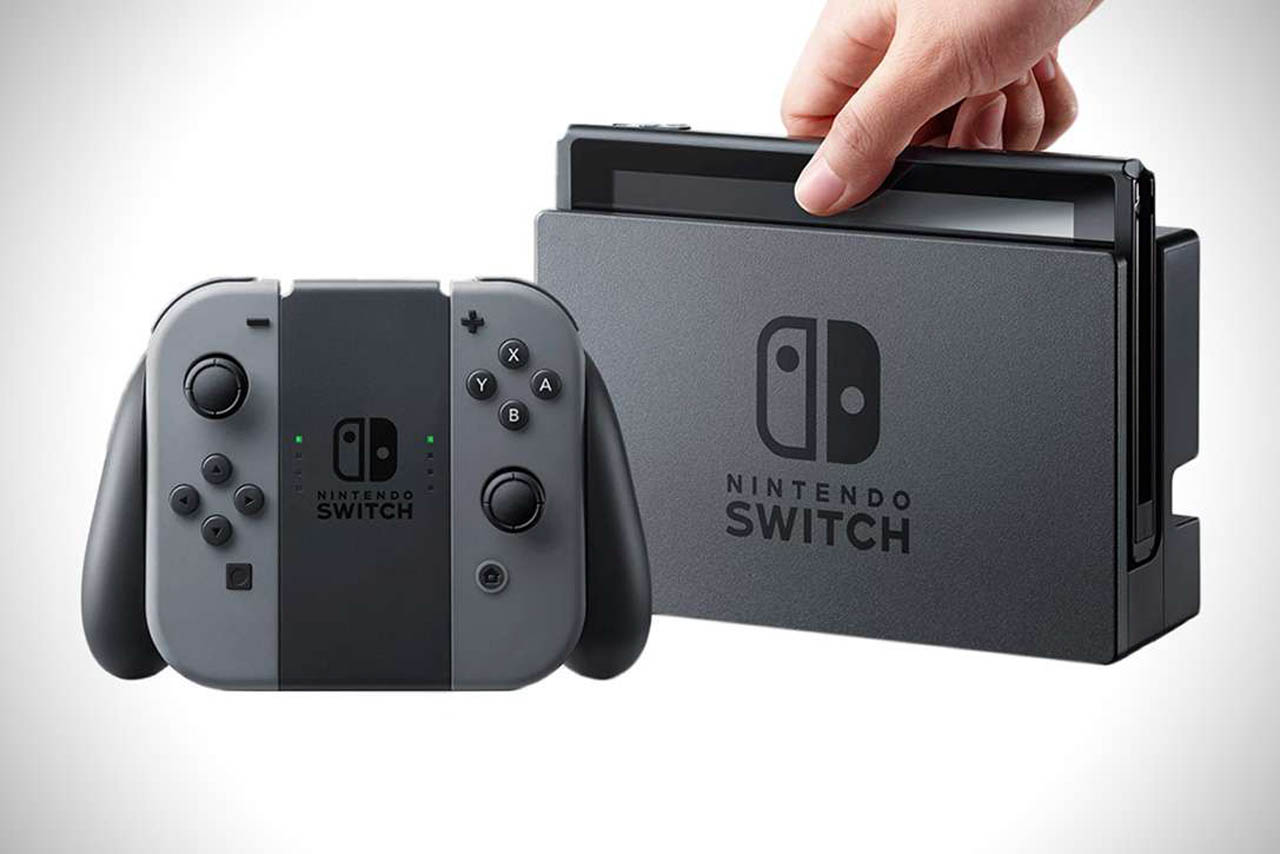 The Nintendo Switch released globally on the 3rd of March 2017 to whet the appetite of super hungry Nintendo fans and the gaming curious.

Nintendo have always been known to walk their own path and to innovate – the Switch is certainly different. A hybrid of home console and portable gaming, basically the gameplay does not stop when you leave the house, literally take it with you and pick up where you left off.

Nintendo Australia has supplied StG with our very own Switch, so once arrived we couldn’t wait to set it up – and set up could not have been more simpler! 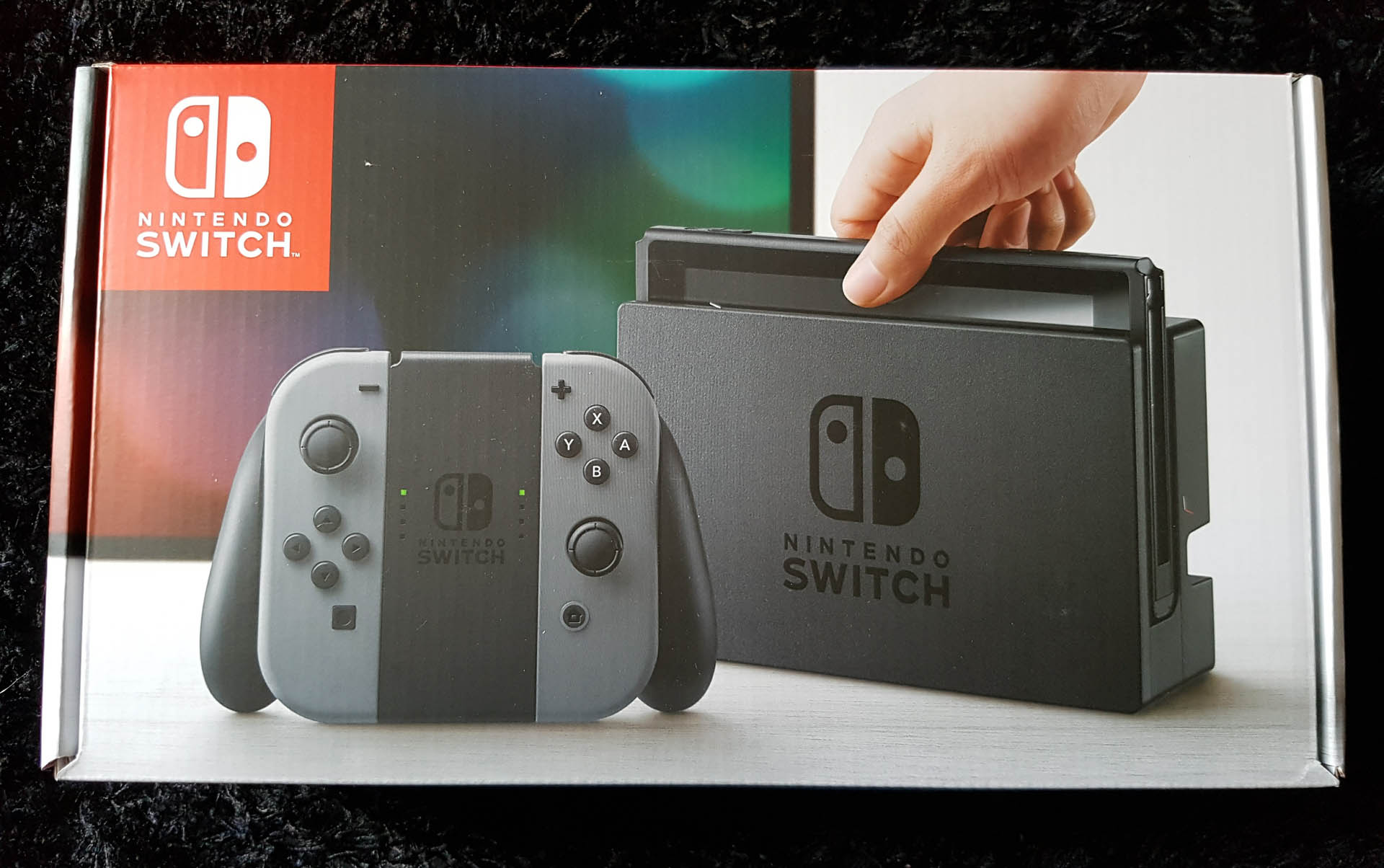 But just incase, there are instructions as soon as you open the box (even though the Switch has been designed for simplicity). 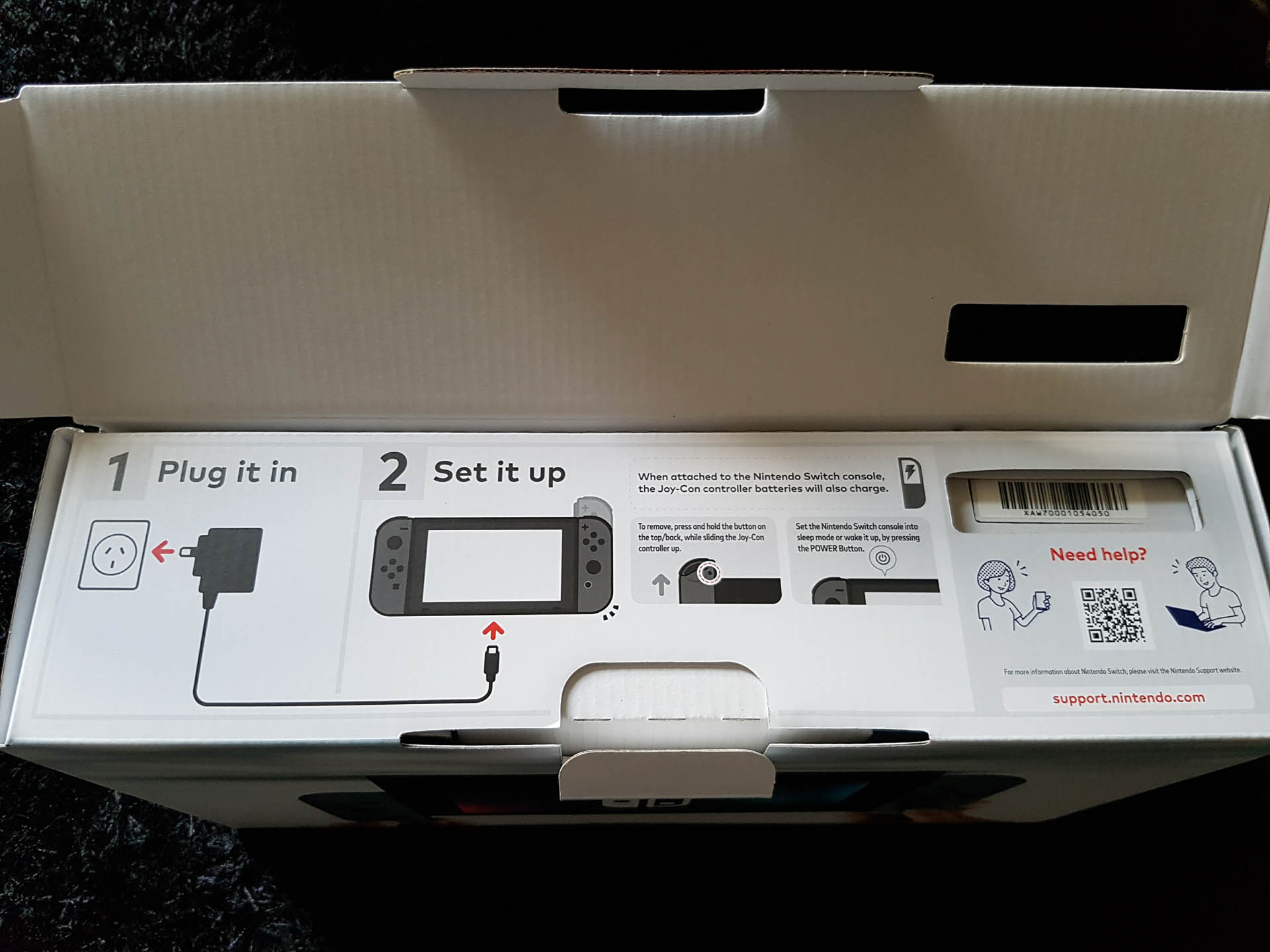 Inside all of the components are neatly packaged. First you encounter the Tablet portion of the Switch and Joy-Con controllers. 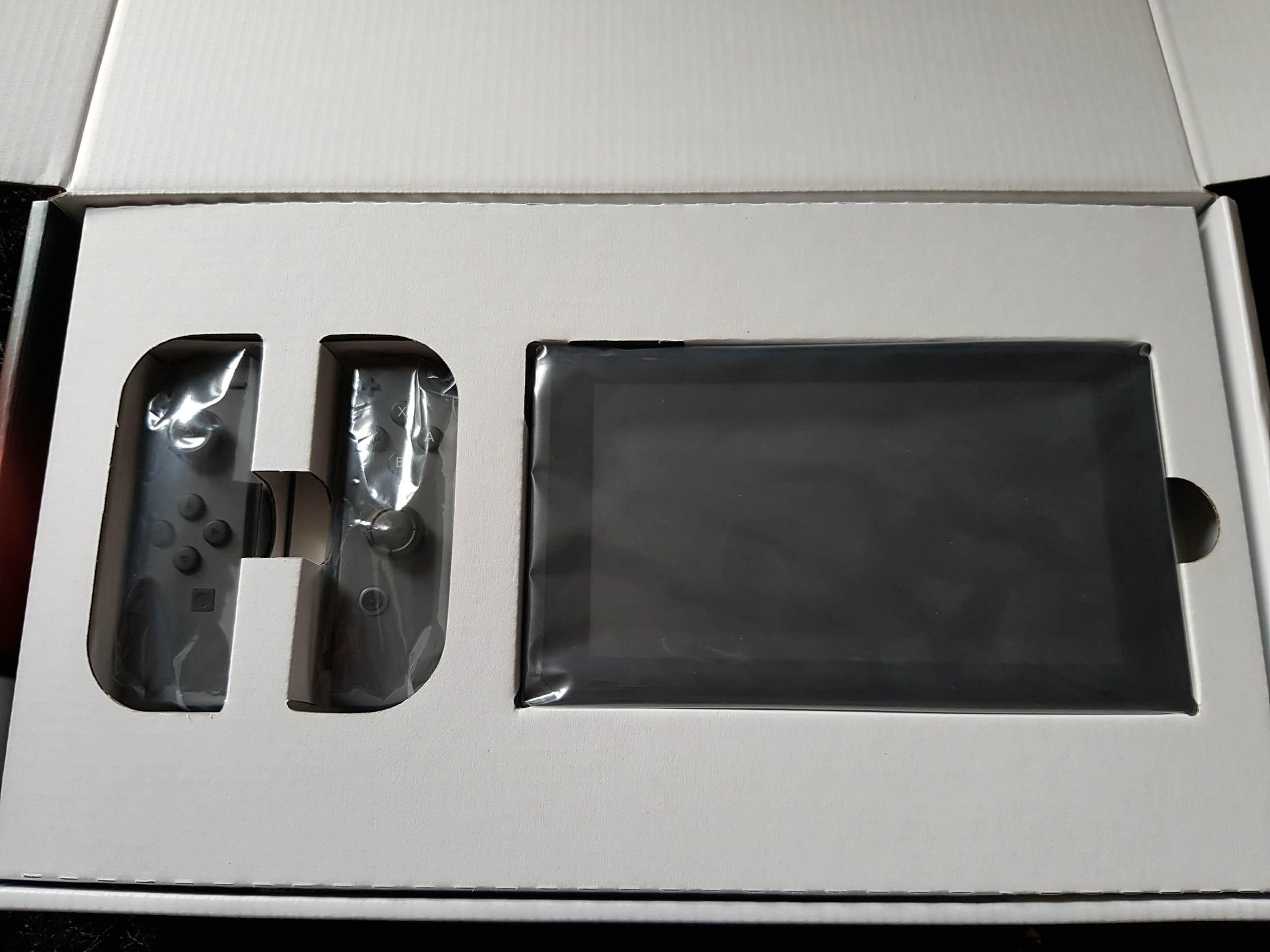 Underneath is the console base (which plugs into AC Power and to your TV via the supplied HDMI cable).

And there you have it – all of the bits to get you up and Nintendo gaming, from the necessary cabling, the Joy-Cons, the side attachments for the Joy-Cons with handstraps, the console Base and the Tablet. Now you just need to place it all together. 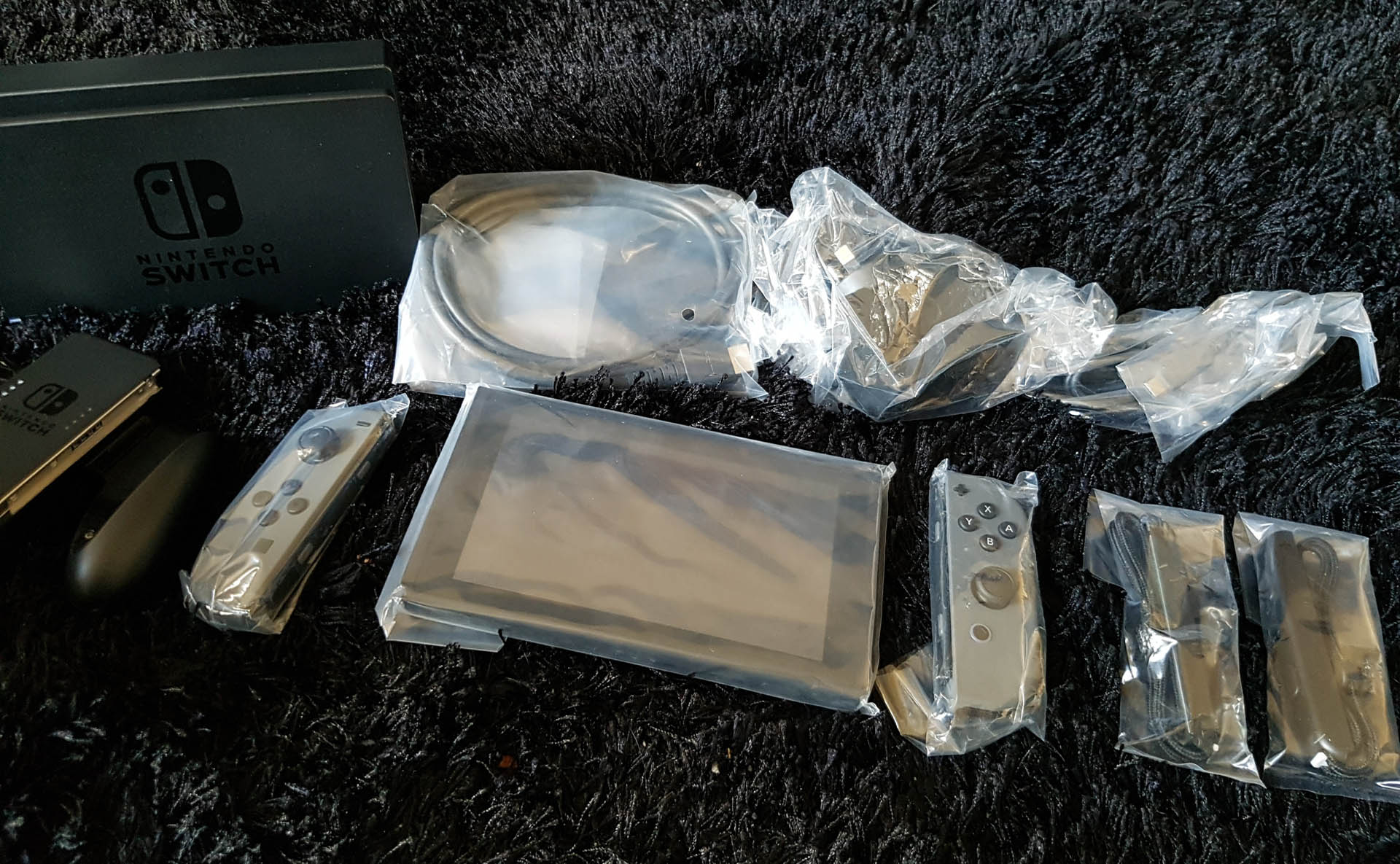 The Base of the Switch is essentially a docking station. Cabling for AC Power and connection to your TV is determined through this unit. But to minimize the bulk and unsightly visual of cables, Nintendo have cleverly hidden the cable bays underneath a doored compartment. Nice. There are three bays; Power, HDMI and USB.

The touch screen 6 inch Tablet to our surprise was actually powered on when we removed it from it’s packaging. There is a small amount of setup to go through, such as connecting to WiFi and either choosing an existing Avatar from the plethora of Nintendo derived ones on offer or your Mii character. If you don’t have a Mii character, it takes no time at all to set one up as you go through the setup. 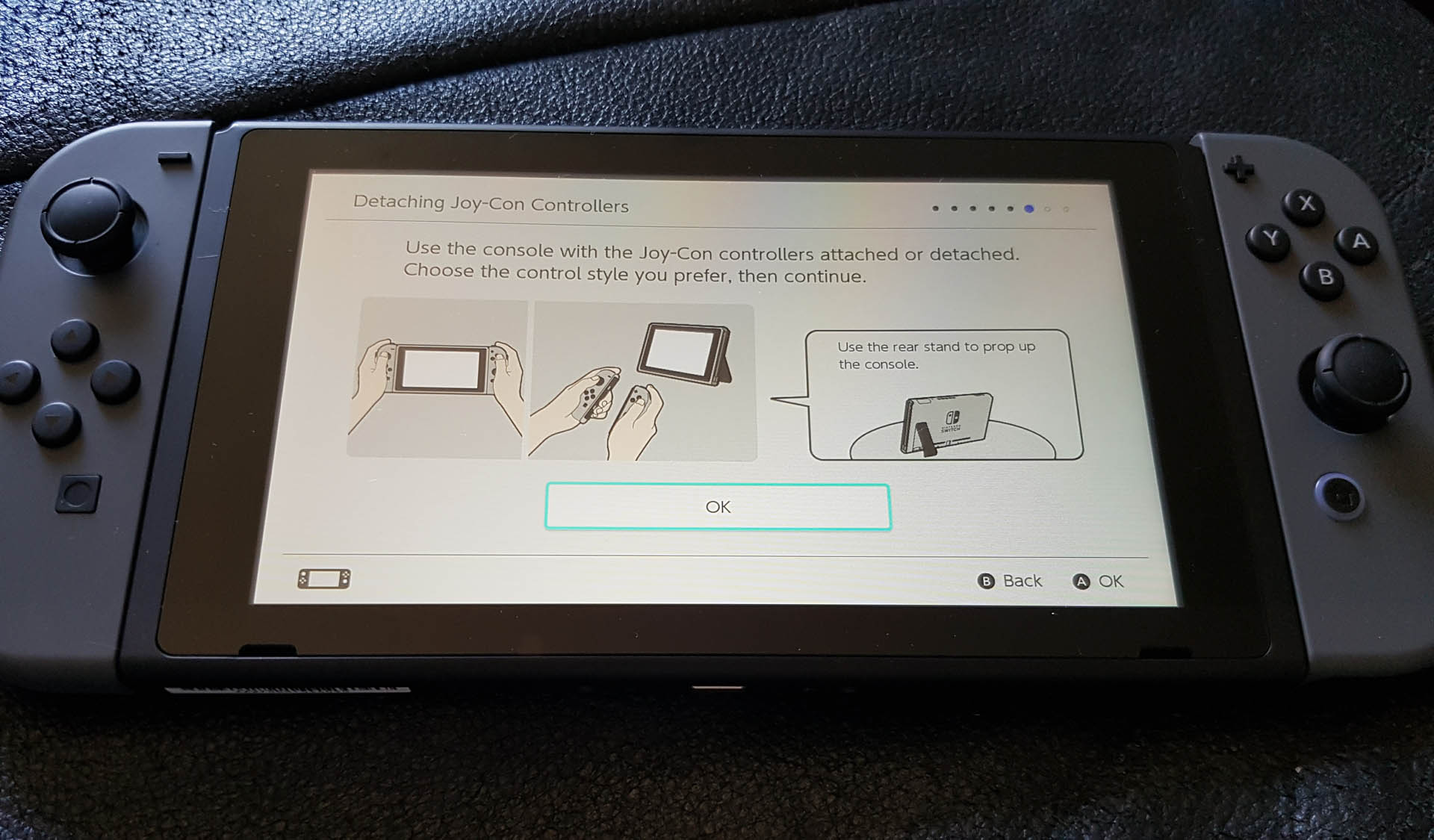 Games come by way of a small cartridge, and these slot in at the top of the Switch’s Tablet. 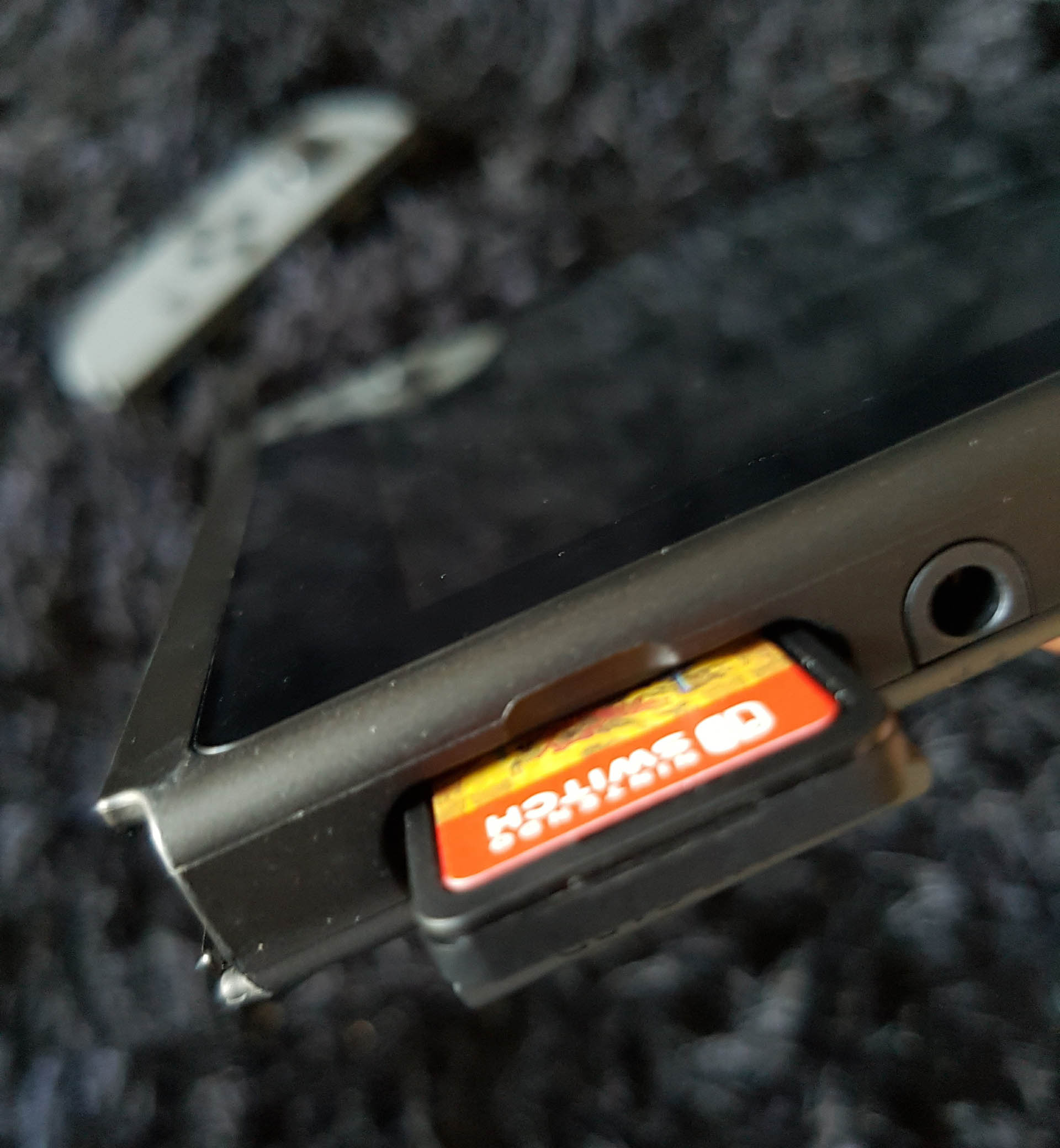 The Switch comes with 32GB builtin storage – however you can also add your own microSD card to ramp up that storage capacity. We tried both a 64GB and 128GB. Both worked. You do need to format your microSD to a setting that Nintendo requires – the software to do this is available via the Nintendo website. You cannot format the microSD for first use via the Switch’s Tablet Storage settings, which is perhaps a bit of an oversight. You will need to use a PC or Mac. 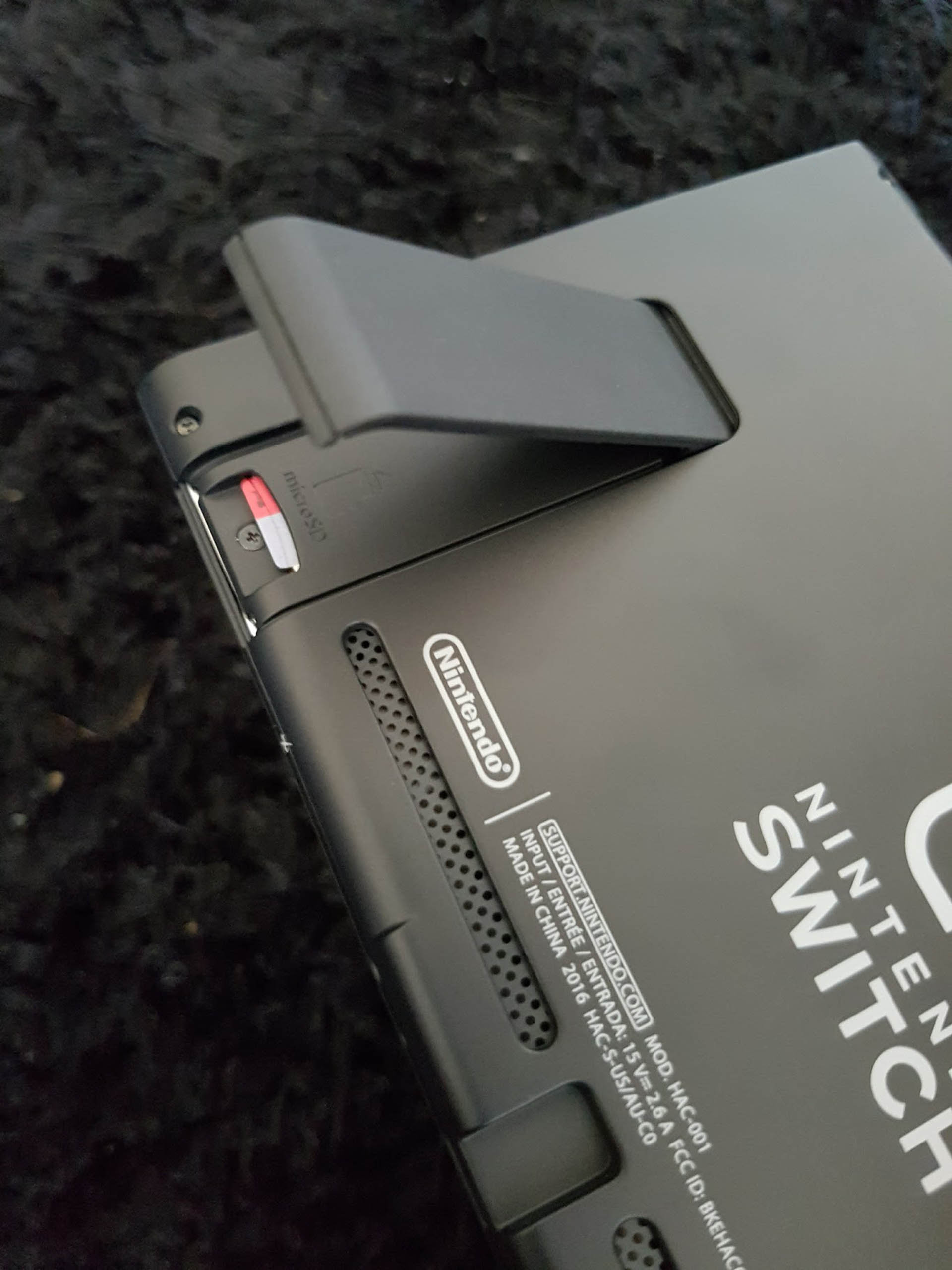 As the Tablet portion of the Switch is designed to be taken away from the base and used externally, there are hardware controls at the top of the tablet for both Volume and Power aswell as 3.5mm headphone socket. 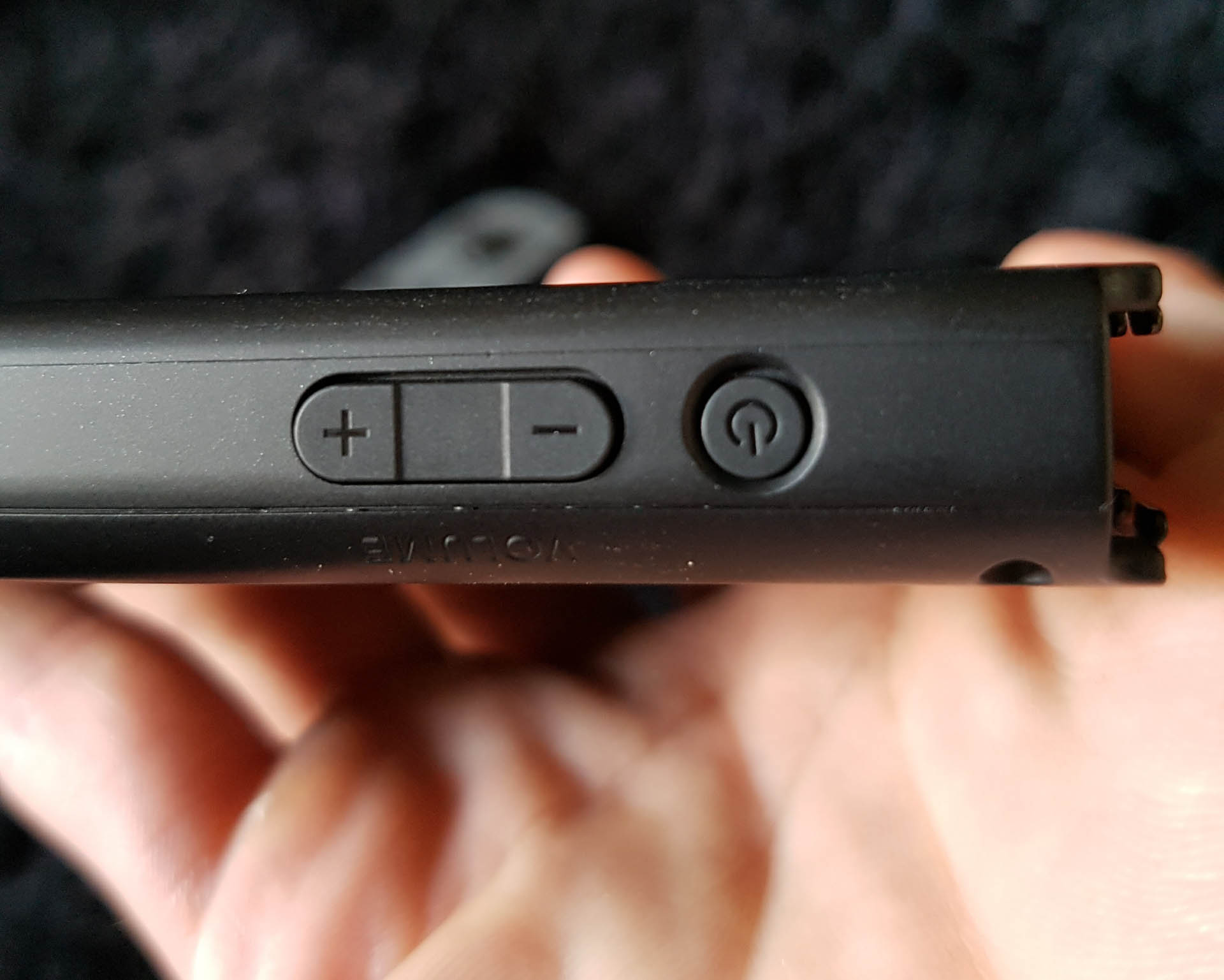 To the side of the Tablet is the slider bays that the Joy-Con’s slide into when playing in Tablet mode. 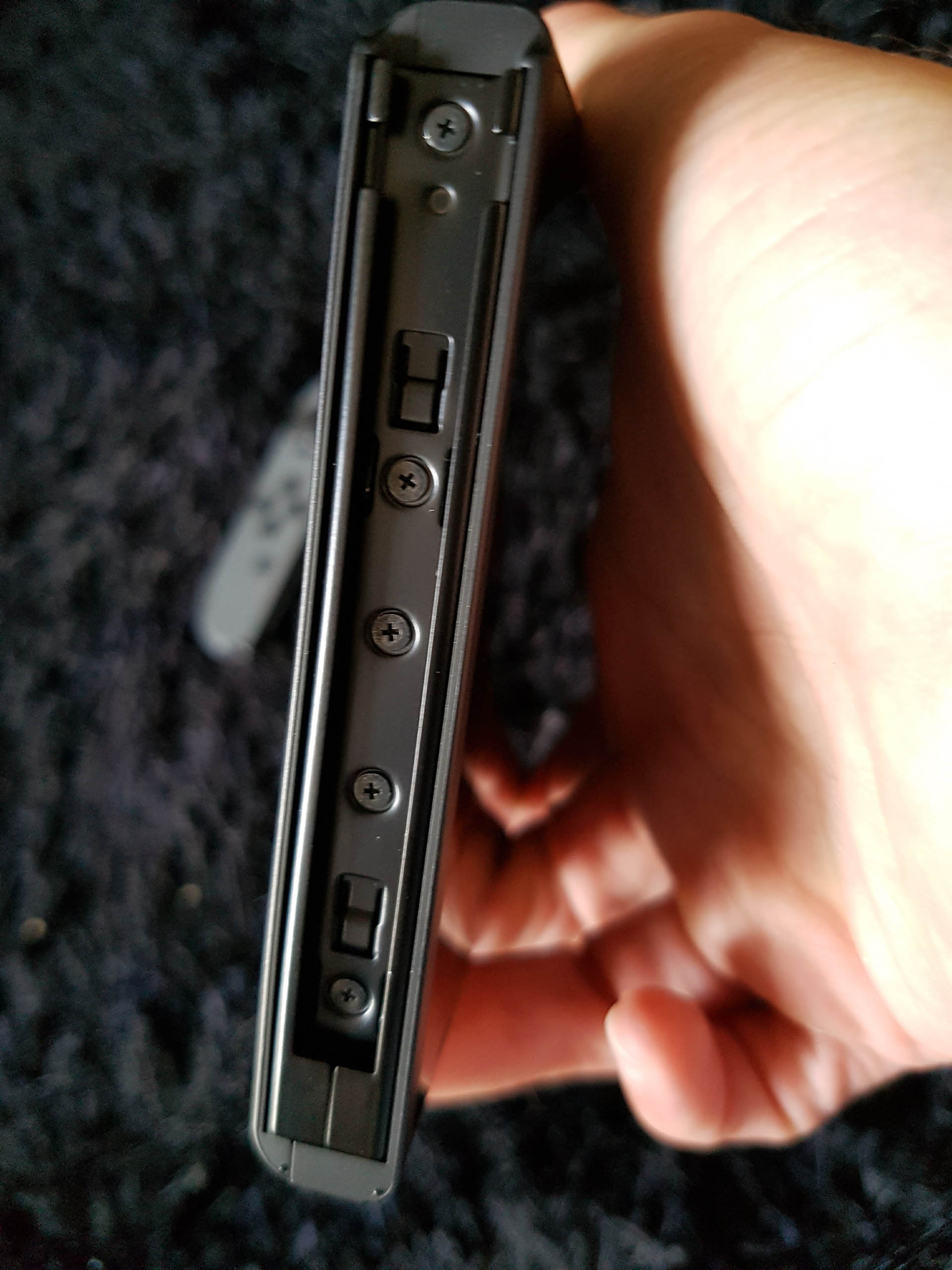 Sliding the Joy-Cons in is too easy and they give a resounding and comforting click once in place.

They lock in place and in order to release them there is a push in button on each Joy-Con. This gives you piece of mind that they will not slide away from the Tablet as you play. 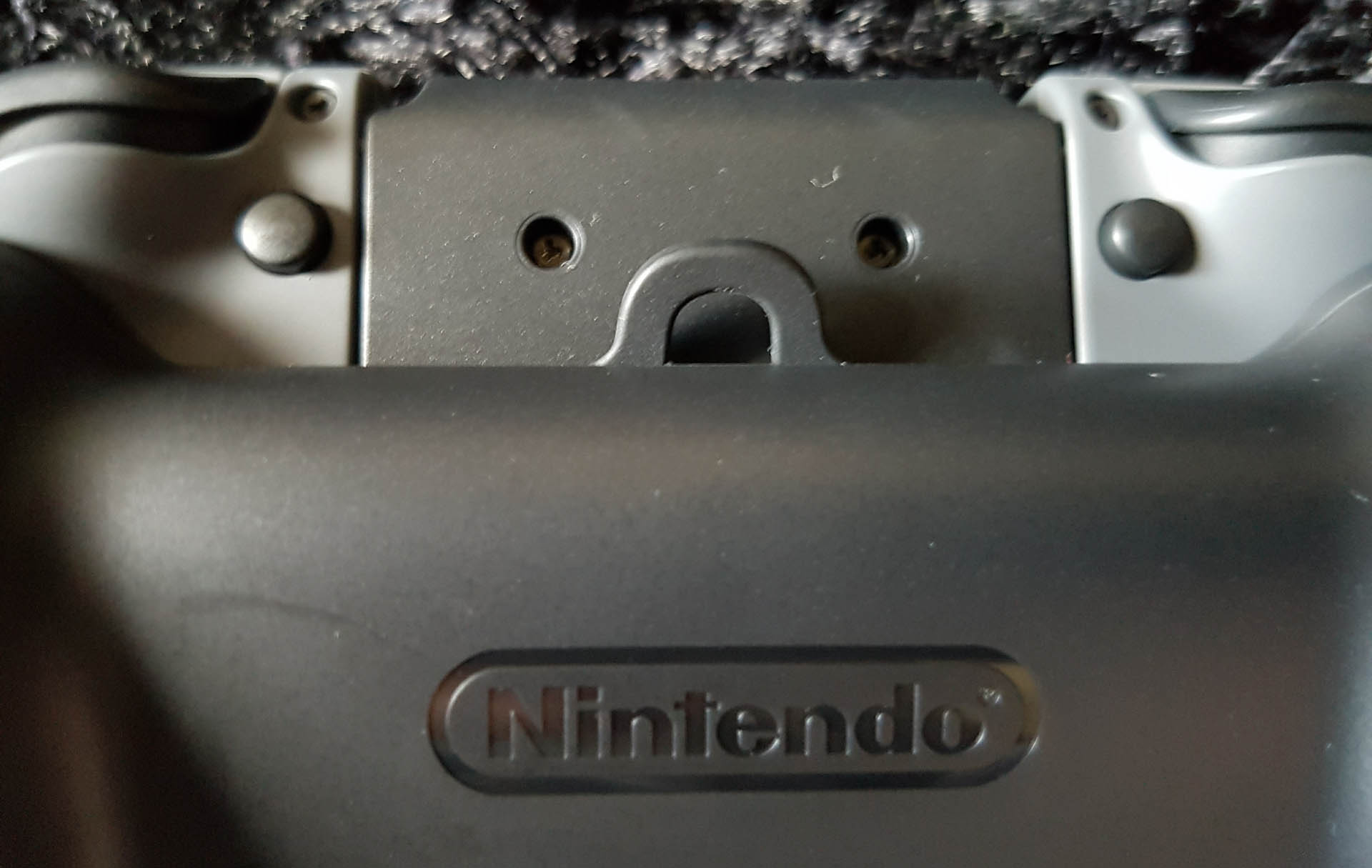 The Joy-Cons can also be used solely on their own – similar to a Wii controller, this is where the handstrap attachments need to slide in to the side of the Joy-Cons to give full external gameplay functionality. 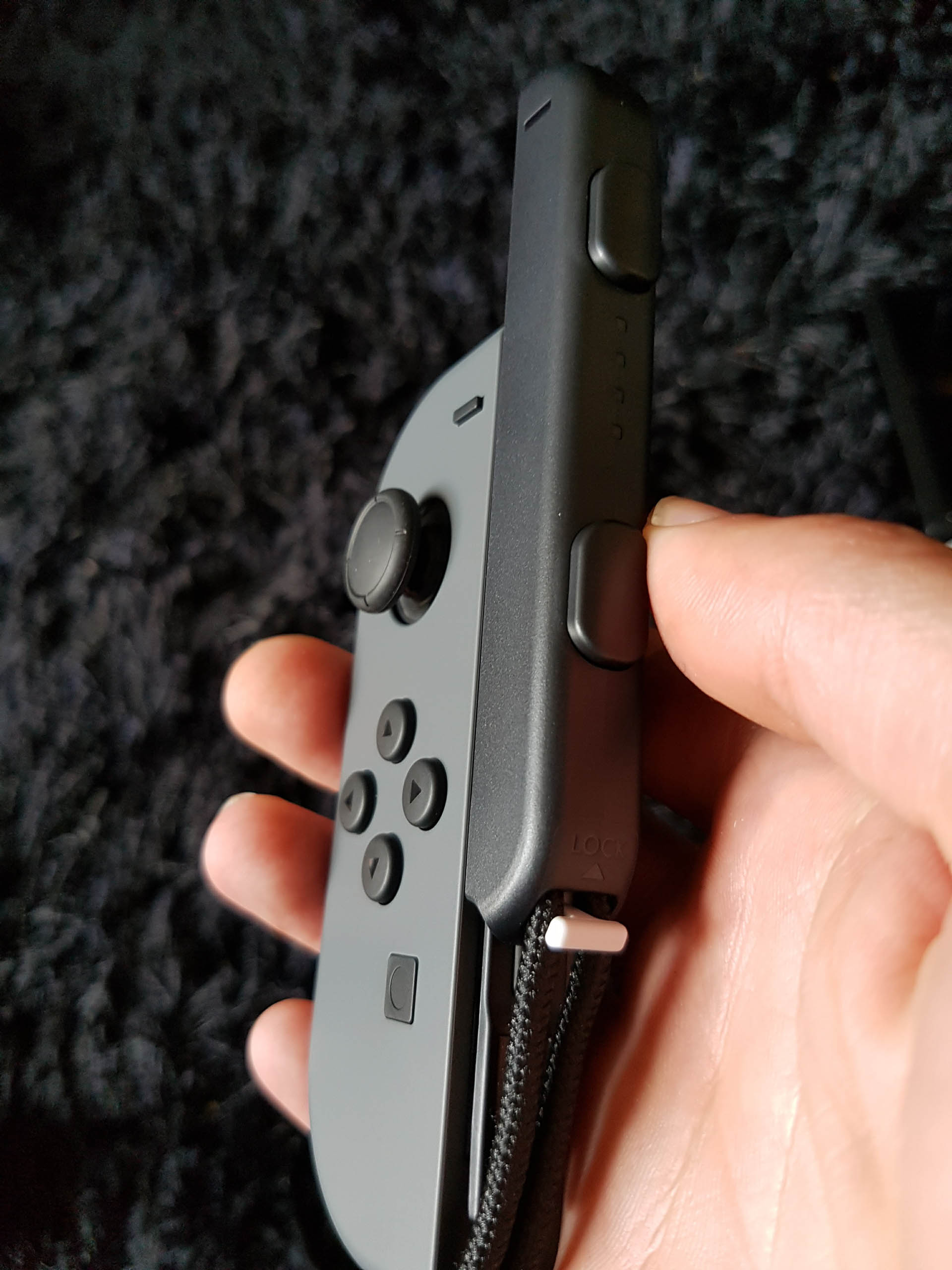 Included with the Nintendo Switch is a more traditional controller base. The Joy-Cons slide in, as they do with the Tablet, giving a full function wireless controller for both at home and on the move gameplay. 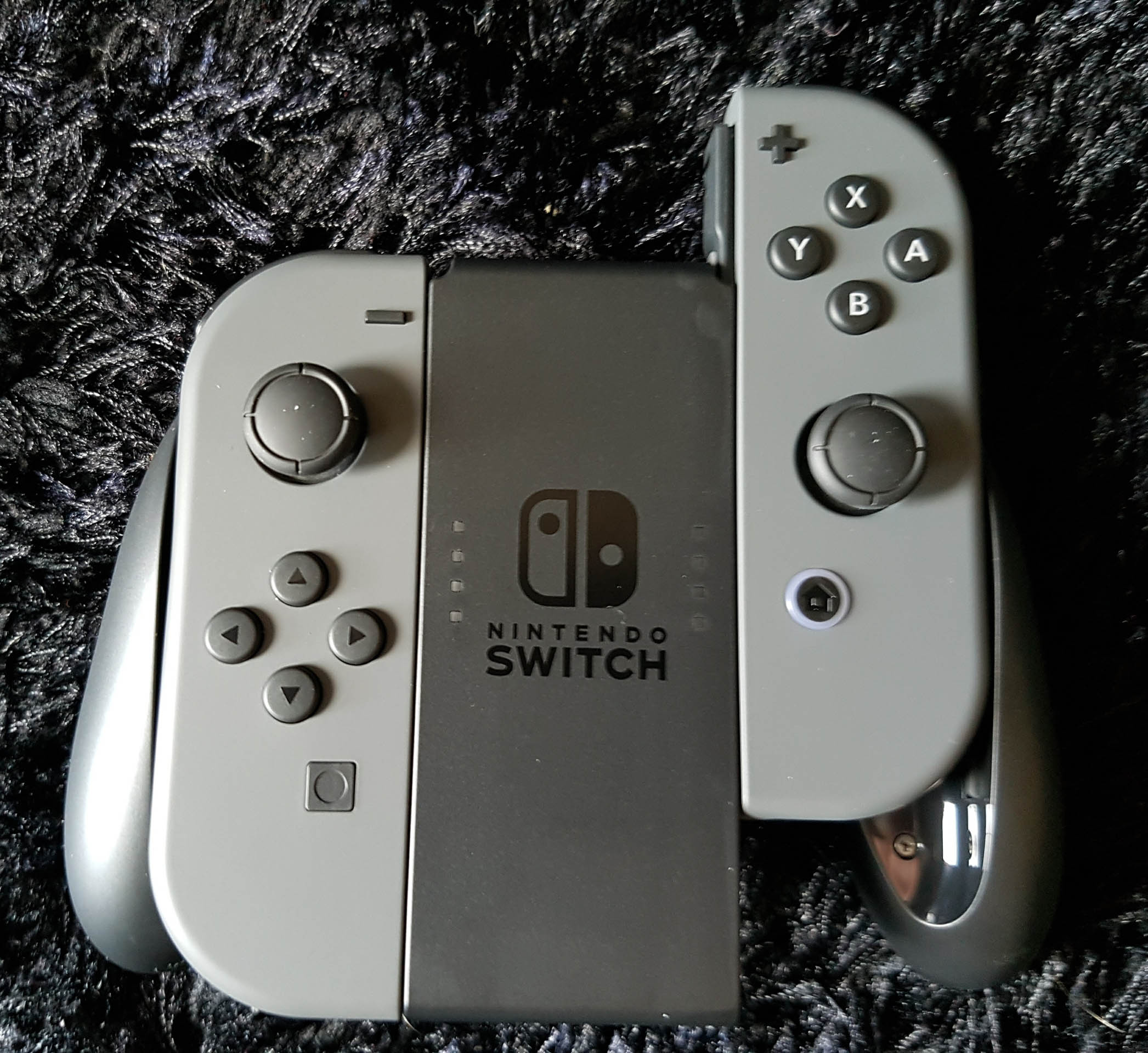 Once the Switch’s Tablet is docked into the base, it will charge, to charge the wireless Joy-Cons you will need to slide these on to either side of the Tablet. As soon as the Switch is docked, it automatically goes from Tablet mode to TV mode. 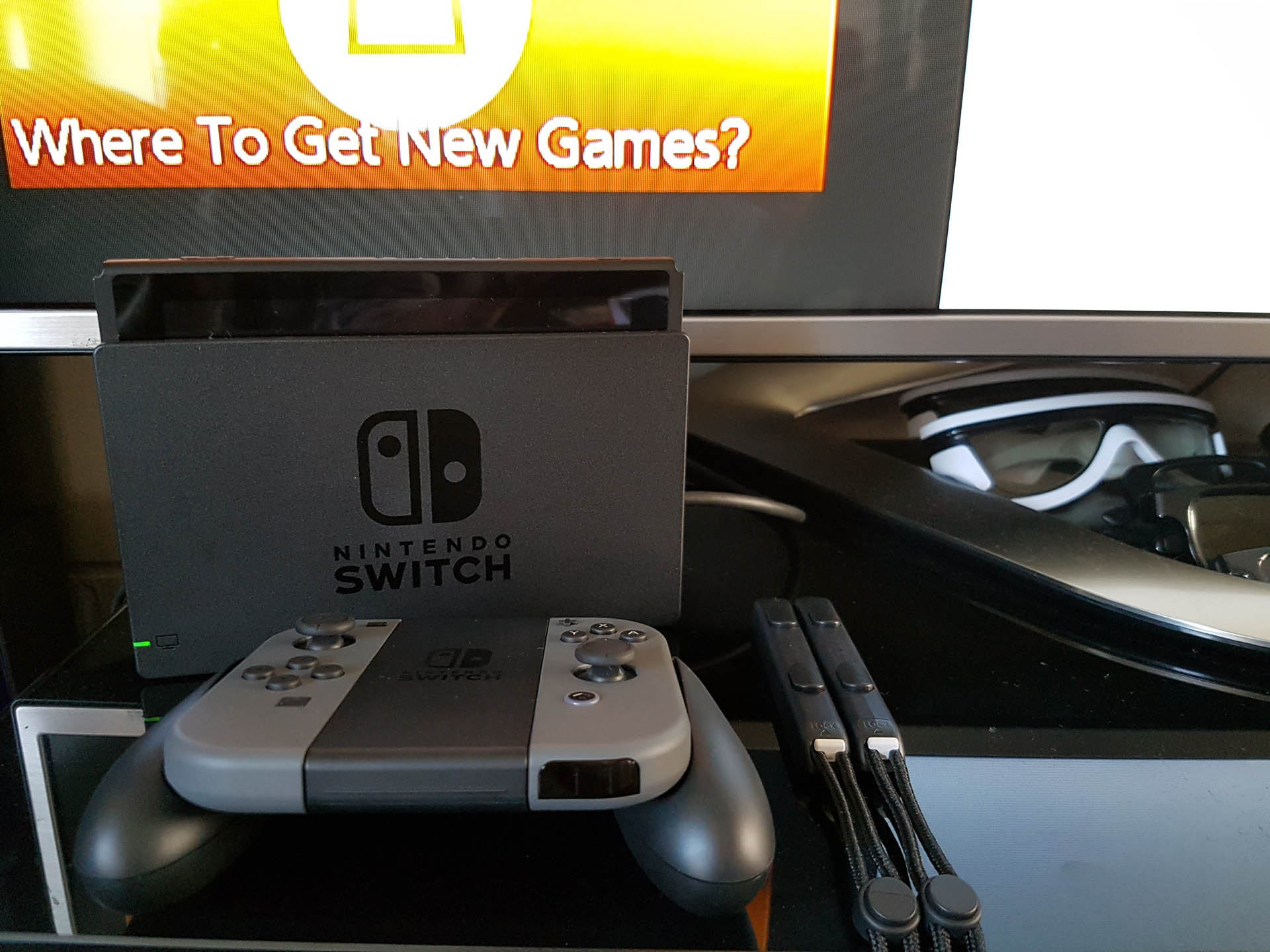 And there you have it. Nintendo’s very awesome Nintendo Switch is all set up and ready for game time, when ever you are, on the go or at home.

Gaming transitions are seamless as you switch (no, that pun was not intentional) from home based console to tablet portable on the fly.

A true gaming innovation and a worthy addition for both Nintendo fans and new comers. There is (and I doubt ever will be) anything like this again. Nintendo have more than impressed us here at StG (well, we were super impressed and drooling at the Nintendo Switch Hands-On Preview Session a month ago).

The Nintendo Switch is now available at retailers. Get ready to Switch things up and game 24 / 7 no matter where you are.