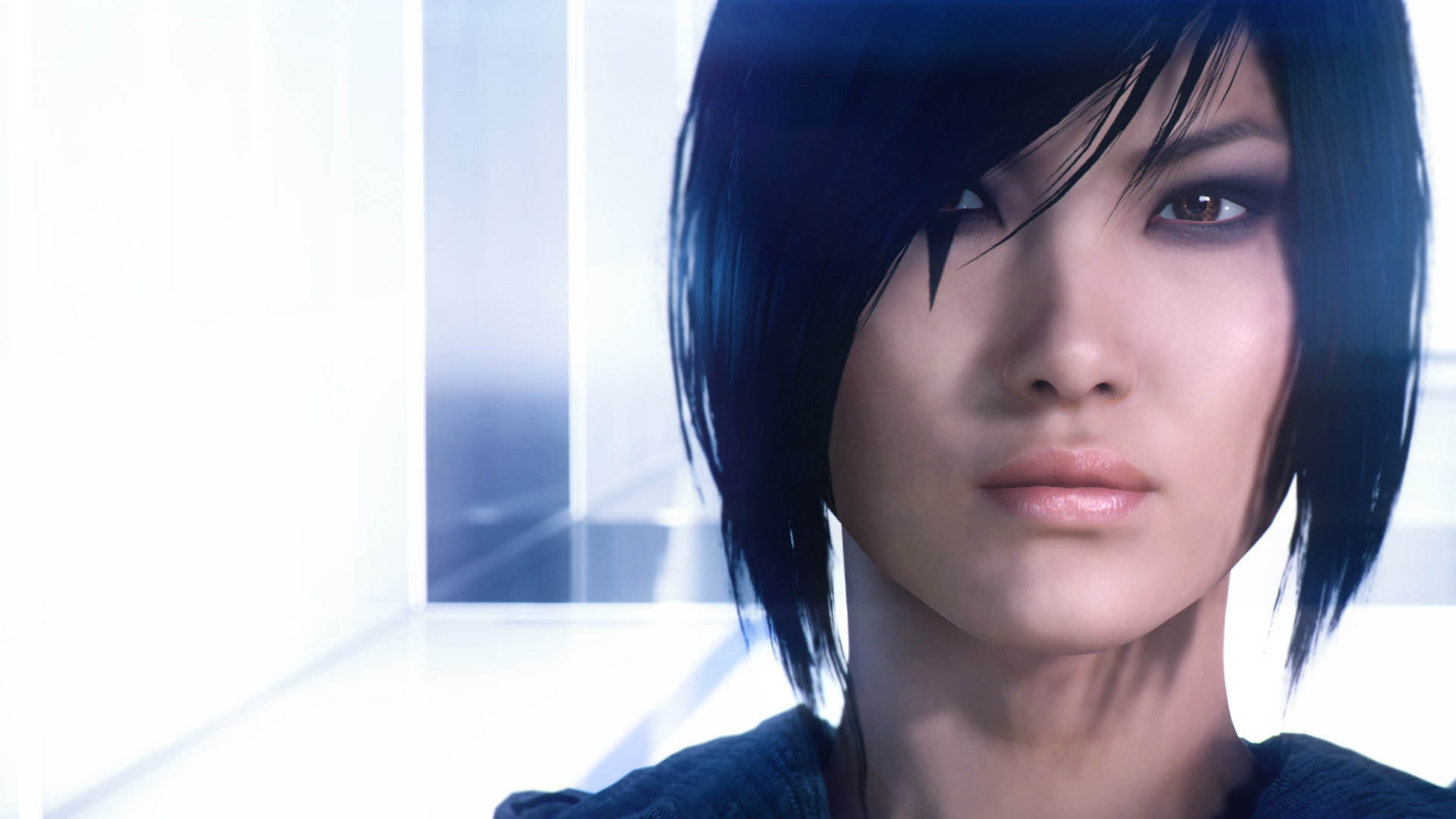 In 2008 the developers of the Battlefield, Dice, took what they knew in first person shooters and took out the shooter creating Mirrors Edge.  Mirrors Edge was a strange first person parkour game that had some shortfalls, but had a cult following thanks to its seamless gameplay.   Fast forward eight years and Dice has brought us something I honestly never expected to see, Mirror’s Edge Catalyst, a remake of the game that feels like an extraordinary step from the original title.

The game kicks in as Faith is released from her cell in a dystopian city, where companies run everything and employees, who is everybody, are connected to an intensely watchful grid.  Faith quickly breaks her shackles to re-join the runners who are people who remain off the grid, fulfilling private errands and as the name would suggest, do a lot of running.  While the conglomerates had ignored the runners in the past, thanks to certain events involving Faith they have decided to crack down hard on them. 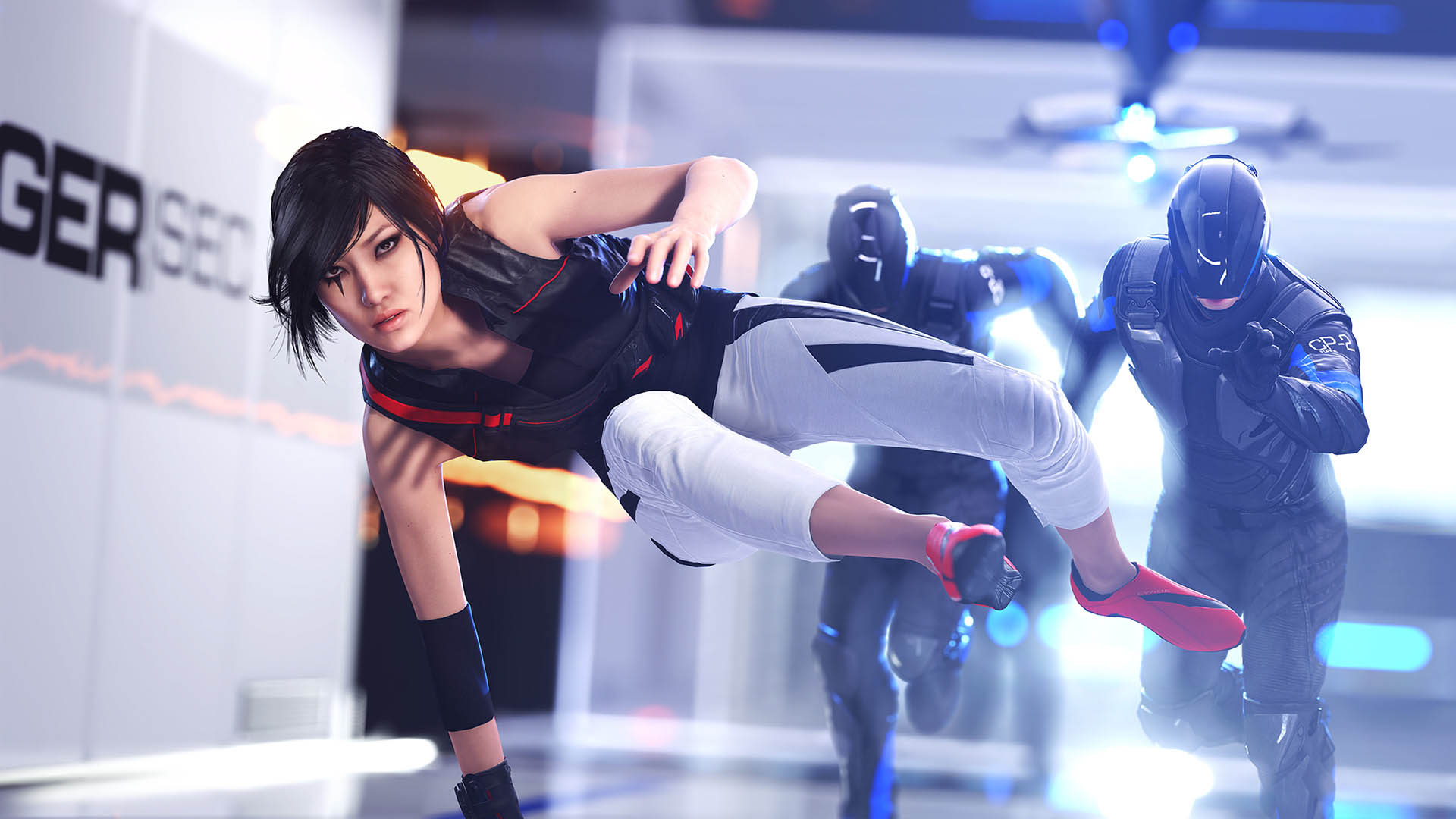 I never felt that the original Mirror’s Edge had too much of a story to care about but what it did was absolutely nail the gameplay that made for an extremely compelling game.  In Catalyst the story has become more relevant and considerably more interesting, though I found some characters to be annoying as hell from the start and in the case of the rival of Faith, Icarus, the whole way through.  The ones I did not dislike were compelling enough to care about the story, but that is not the only improvement in the game.

Mirror’s Edge Catalyst also opens up to an open world setting where you venture around at your own free will and pick up missions around the cities rooftops and with the exception of the occasional mission the rooftops is where you will stay.  Free roaming the city at times can be just as much fun as playing actual missions, locating collectables, or just seeing where you can or cannot get to is an absolute blast thanks to the smoothly designed free-running mechanics and the controls that work with no issues. 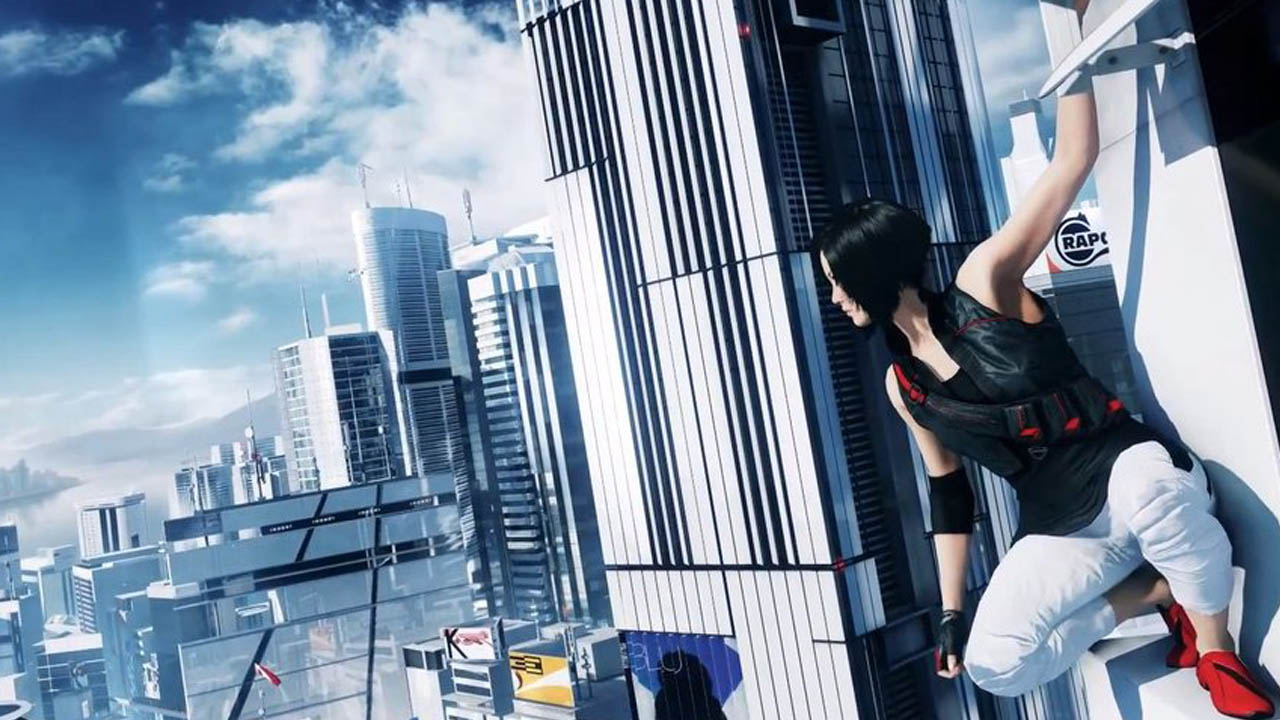 Having played the BETA I already knew what to expect but the game has certainly been refined since then.  My biggest issue in the Beta was the atrocious load times which if you made a mistake and fell from the rooftops you could easily wait for up to 28 seconds for a second chance.  This has been improved to where most falls took around the 20 second mark to put me back in control.  While it is an improvement I found it to still be far too long, especially for a game that prides itself on finding different ways to get from A to B.  It can become disheartening to try different routes when a misstep may cause you to wait for a long time.  It is a minor gripe, but one you will encounter regularly which makes it far more prominent.

The game aesthetics are just excellent. It is far more detailed than the original but uses large doses of plain colours to keep its clean and unnatural dystopian future look.  This is remnant of the original title but very much improved upon.  There are still very red platforms floating around but instead of the whole path appearing red the game has a runner vision option which you can turn on which shows a fuzzy red line at times to give an indication of a path to get where you need to be. It is not always the most efficient way so it should be taken with a grain of salt especially in time based challenges, but useful, especially if you hit a dead end.

For the most part the character models look good but Noah looked especially bad in cutscenes with what looks like random dents in his face as if the sculptor slipped a few times holding a hammer. I am nitpicking but it stood out every time he was in frame. 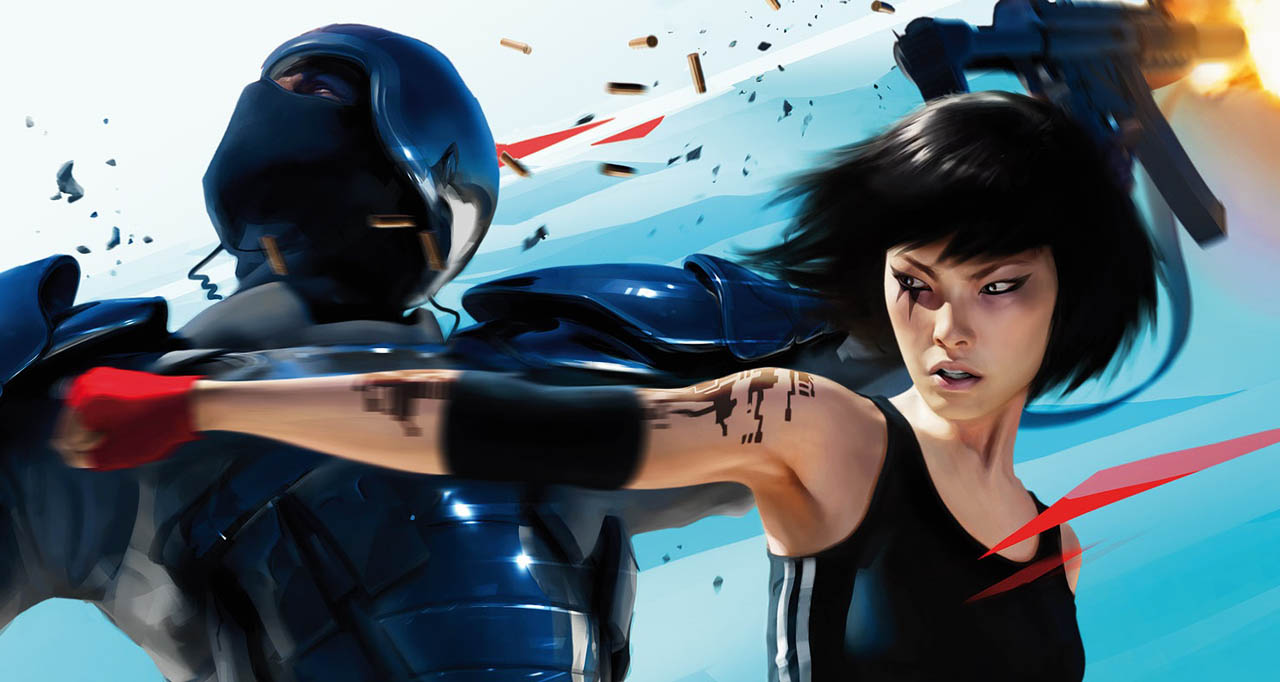 The upgrade system in the game is there and that is about it.  You can upgrade to add talents which can make you slightly quicker like being able to hold your feet in the air when you slide, but you will likely unlock them fairly quickly as there are a lot of challenges and collectables to give you experience.  Then there is the upgrade which I found unfortunate, the use of a Mag rope which allows you to swing across gaps.  The moment I unlocked this I thought the city was going to open up even more to me, so to find out that it could only be used in specifically designated spots really was a let down.

The game is also not without its bugs.

There were a handful of times the camera would pop into a wall, parts of enemies would fall into walls and other silly aesthetic things like that.  Fortunately they were not game breaking, but some level design issues where you find yourself somewhere that you do not seem to be able to get out of without checkpoint reloading may fall under this category too, but that was also a rare occurrence. 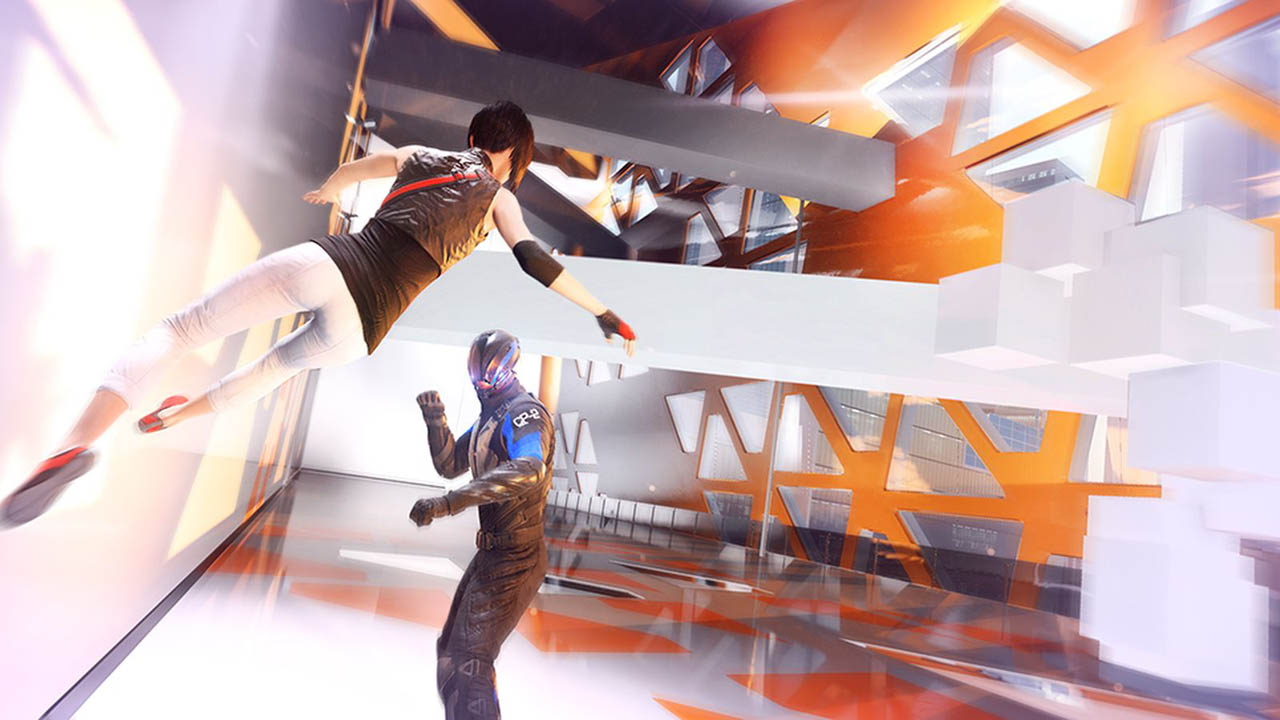 Looking at the sum of its parts Mirror’s Edge Catalyst is a great game which is superior to its original in many ways, but it unfortunately does not quite meet its potential, falling short in some areas.  With ample side missions and user created runs there is a tonne of value post game and it is easy to replay missions, not quite the amazing game it could have been, but still a game that meet the important expectations I had for it.