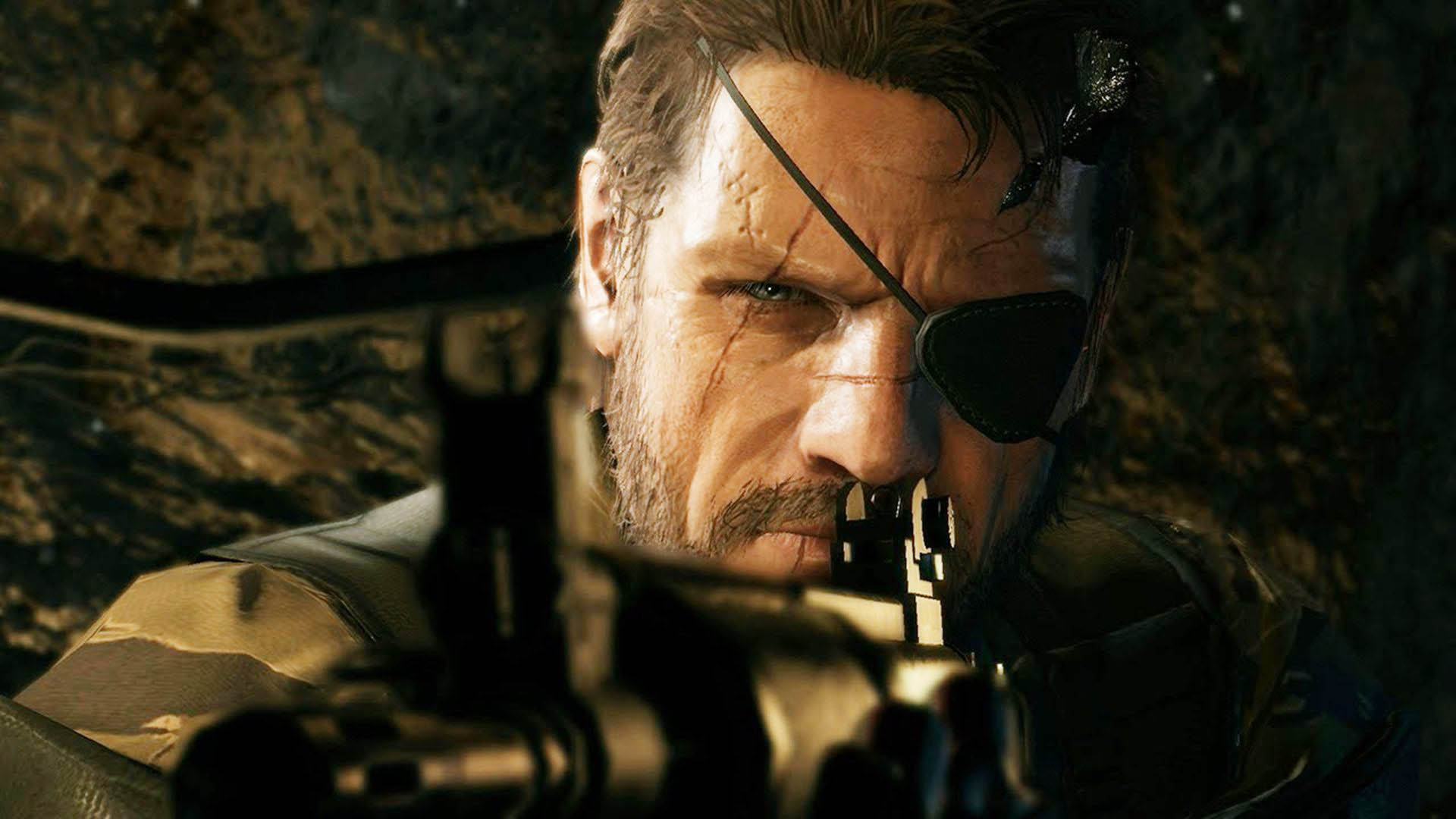 In recent times an incredible number of open world games share a striking number of similarities to one another. Go there, capture or kill enemies, takeover the base, win control of an area. Assassin’s Creed, Far Cry and a host of others have followed this formula. For a game that is essentially a more complex version of Far Cry 4’s base takeovers, Metal Gear Solid V shines with its incredible attention to detail and allowance for unprecedented creativity in gameplay.

Metal Gear Solid V is the last of the main series of Metal Gear games by auteur director Hideo Kojima, and was preceded by what essentially amounts to the game demo prequel Metal Gear Solid: Ground Zero. The game was born during a troubled relationship between Kojima and Konami (with, essentially, the dismantlement of Kojima Productions in Los Angeles) but fortunately none of this is evident in the game itself. Both parties have displayed a maturity not to affect the product, which is in equal parts brilliant, frustrating and plain out weird. 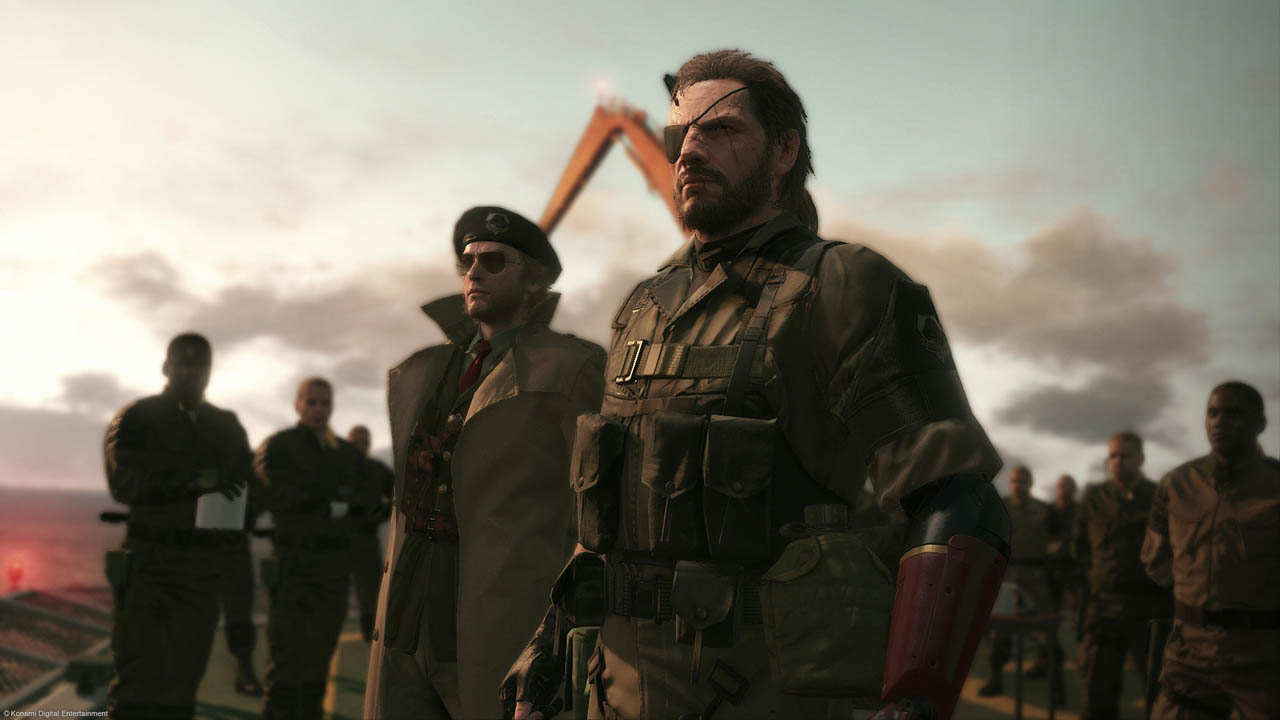 After a short and inscrutable introduction that not even the most ardent Metal Gear fans will understand (and one that, frankly, could have been left out with no injury to the game), your mostly silent protagonist Big Boss is dumped in the Afghan countryside during the Soviet invasion and occupation of the country. The missions he is tasked with there are long, complex multi-stage adventures that can seamlessly tie into one another.

Each require patience, care and attention to detail. Fortunately, this doesn’t mean boring, routine checklists that need to be carried out. In a first for the series, the open world allows you excessive freedom to approach each infiltration situation individually and according to your own play style.

Gathering information and planning the perfect base run takes time, time you won’t even notice is missing. 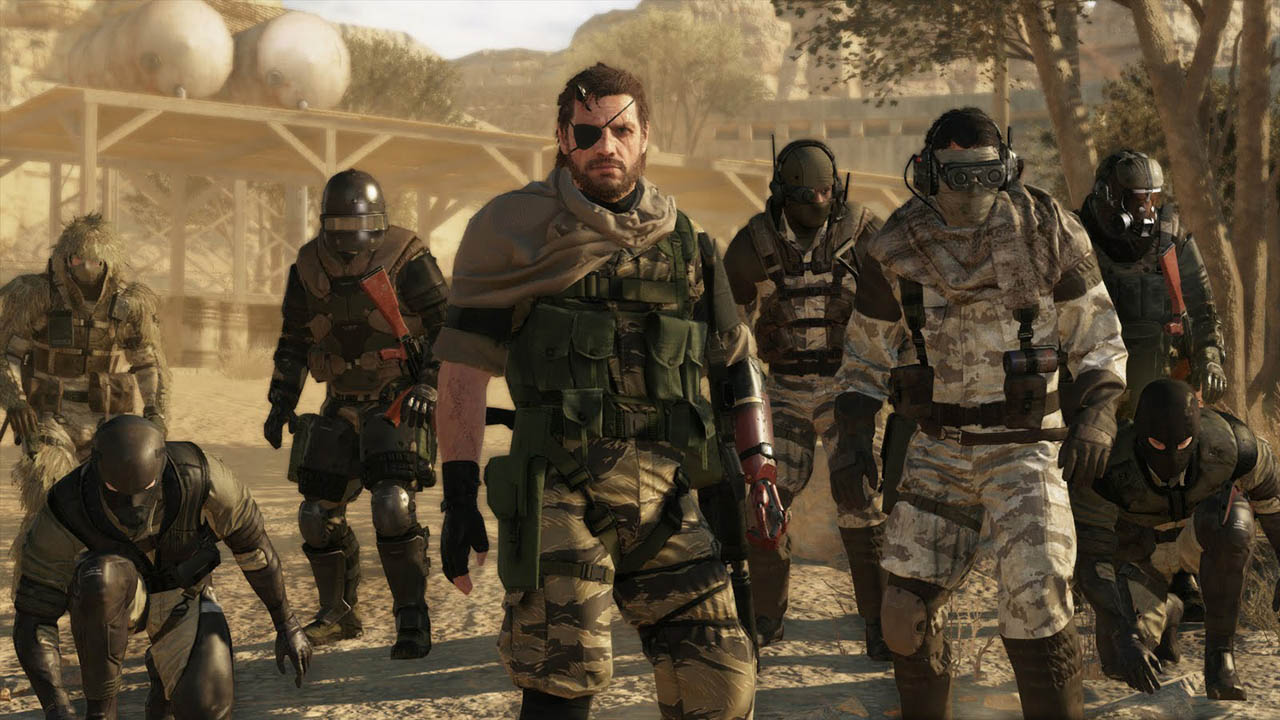 Stealth is still the most effective approach, and staying hidden is where the game design pushes you. A run-and-gun approach is never quite possible, but it’s not an instant fail if you’re spotted. This is highlighted by the “reflex” mode – where when you are spotted you have a few seconds of slow motion time to incapacitate the enemy spotter and not raise an alarm – a lifesaver for a less than professional stealther such as myself.

Of course, you will then have to deal with the consequence of incapacitating enemies. The intricate relationship between actions and consequences is where the game shines. Enemies react intelligently individually and in groups. 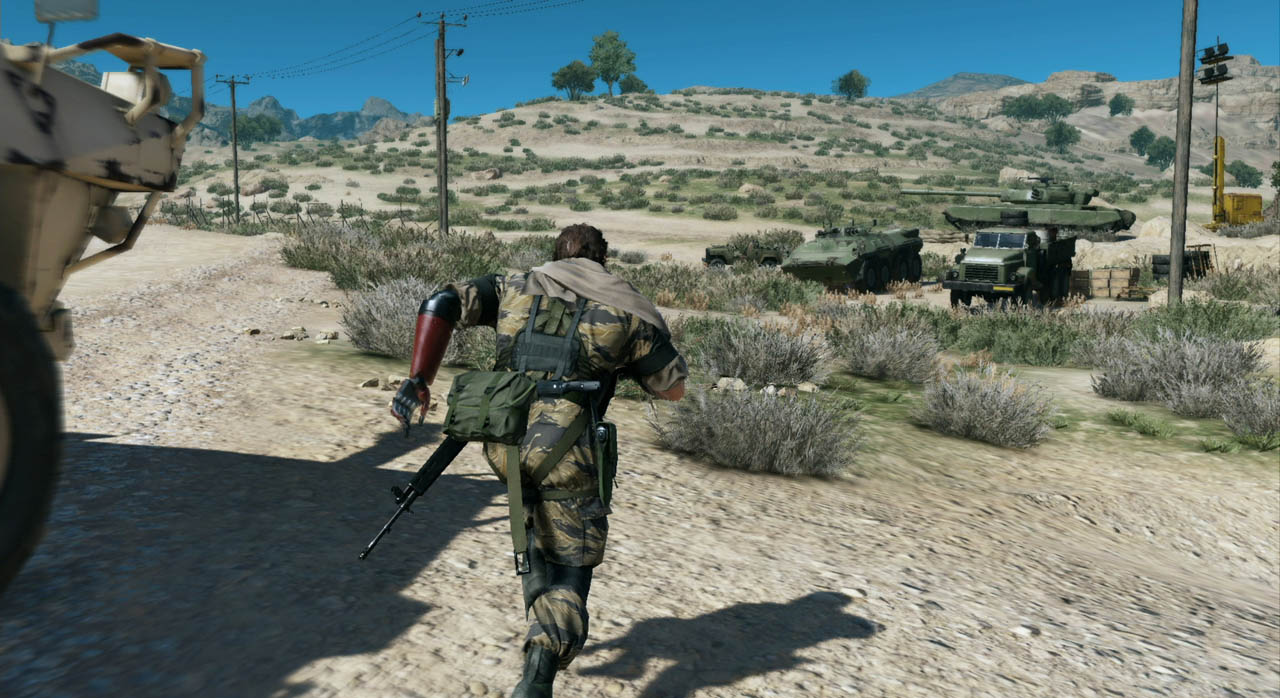 On the ground you are always aware of your background support in the form of a floating city called Mother Base.

Managing Mother Base is key to success in Metal Gear Solid V. Successfully recruiting enemy soldiers and sending them on missions, researching new weapons and techniques, and visiting the floating platform to raise morale or simply to shower or pat your wolf puppy are key to being effective on the battlefield. A complicated layer of menus for directing what happens in Mother Base can be a frustrating experience on console controllers, but I expect is much easier on PC with a keyboard and mouse.

“Fultoning” – attaching an extraction balloon to enemy soldiers and equipment strengthens your army which in turn provides you with more options on the ground. For example, on many of your missions you can call down support in the form of dogs, helicopters (which basically functions as a “you win” card), or other assistance. 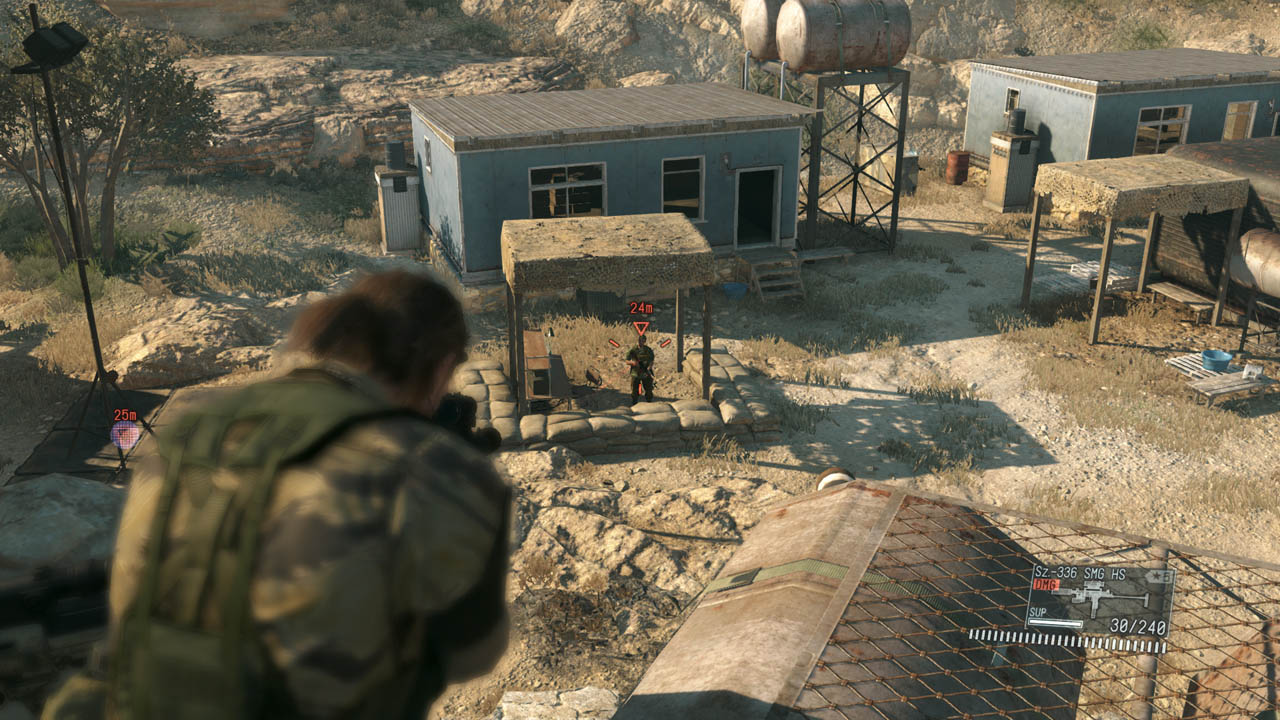 One of the most discussed assistants is the Sniper Quiet. Quiet is a ridiculous caricature of what’s wrong with female representation in games.

She looks so lewd she’s almost ironic, but this being Kojima it’s not at all. It’s disappointing to see that in 2015 we have to endure such blatant sexism and female objectification in big-budget games. The game’s ridiculous explanation for Quiet’s lack of attire hints at a recognition that the designers knew what they had made wasn’t going to be acceptable to most people.

Instead of providing weak excuses for poor decisions, they should have fixed the issue instead, perhaps taking hints from 2013’s Tomb Raider reboot of Lara Croft. 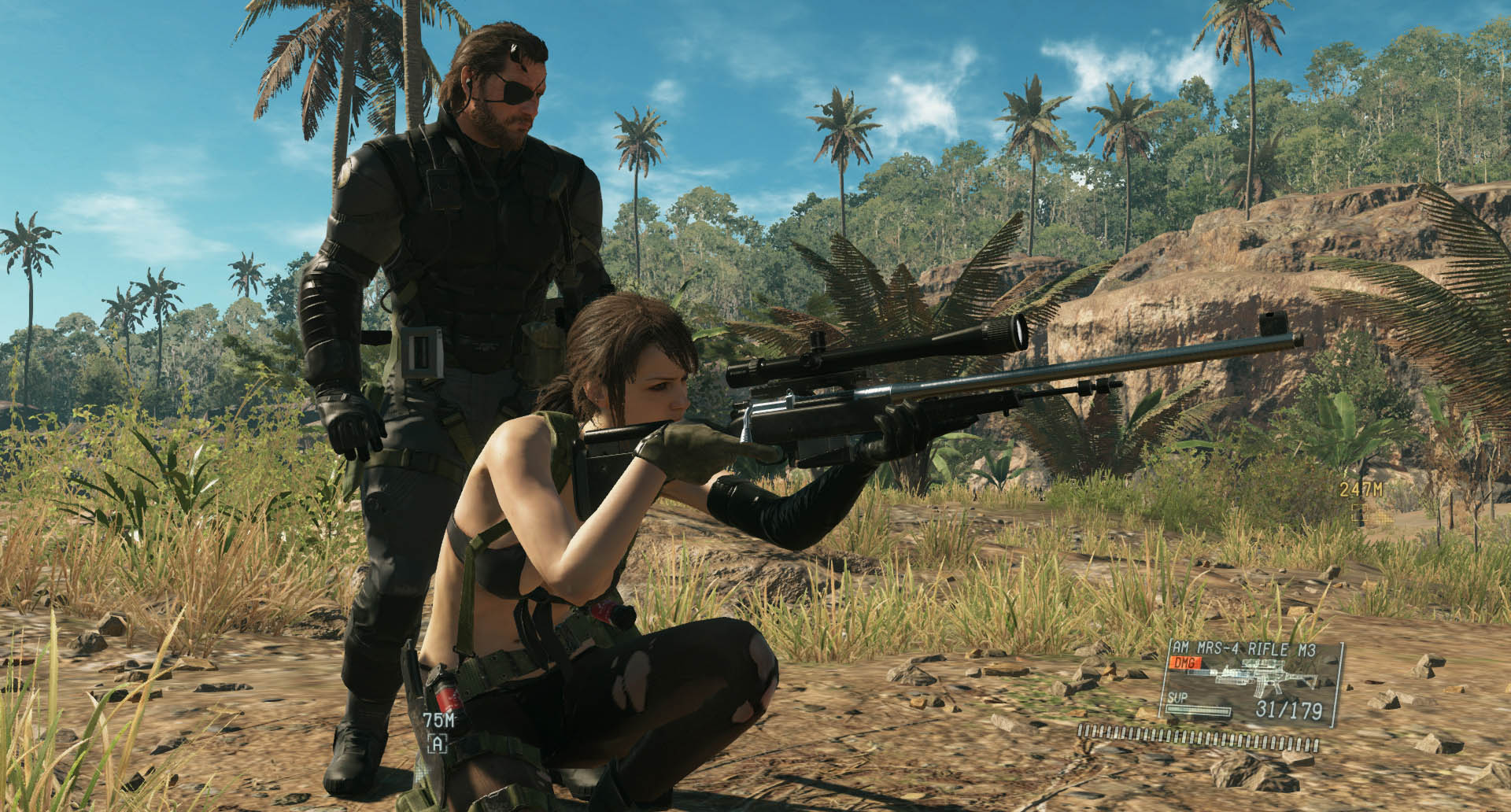 The graphics of Metal Gear Solid V are stupendous.

Outside of the small base in Ground Zero the game truly demonstrate the power and capabilities of the Fox Engine on modern hardware, which runs in 1080p on PS4, 900p with 1080p scaling on Xbox One, and 60FPS on both. The game is also available on last-gen hardware where it runs in less than 720p and in 30FPD, but I would seriously suggest upgrading to current-gen consoles for this game.

With the demise of Kojima Productions and indications that Konami is getting out of the AAA games industry, I hope that it licences one of its best assets to other game studios, if nothing for my personal desire to see the promise of 1080p/60FPS come true on Xbox One and PlayStation 4. It would be a waste to see it discarded and unused, a victim of a personal feud. 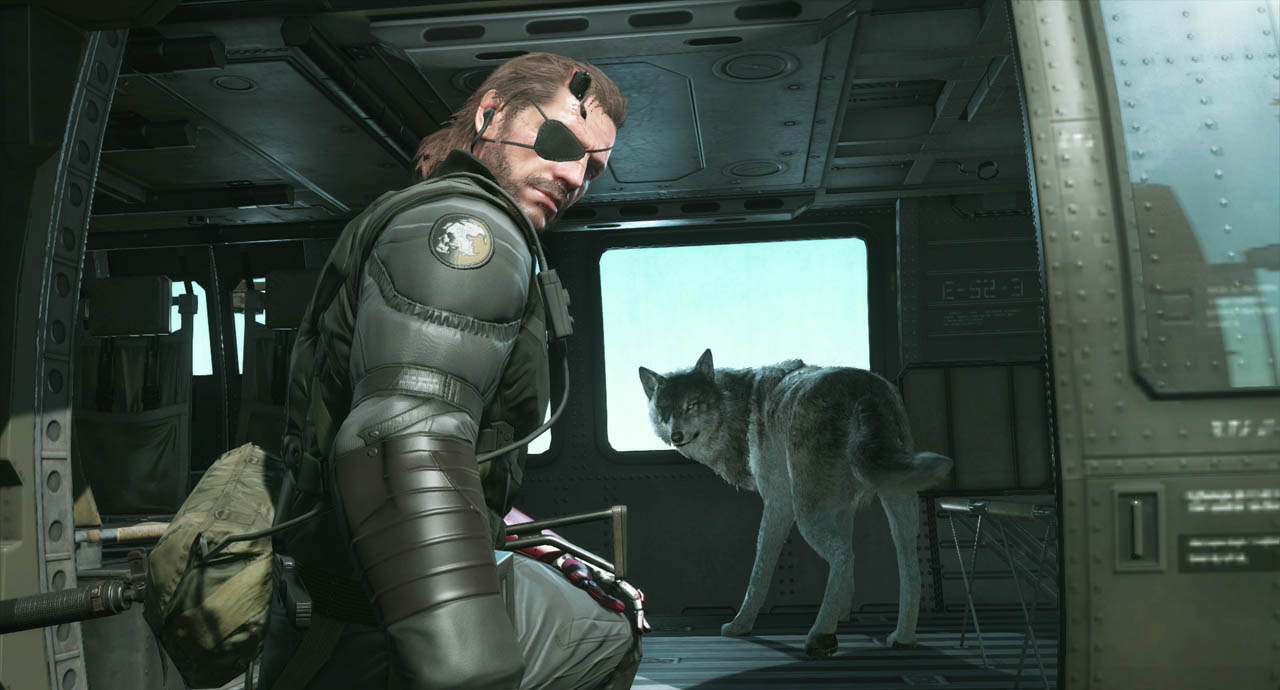 The Metal Gear series is known for its complex storyline, one that is almost unknowable even to the games’ biggest fans. The story is nonsense, but at least it isn’t in the way. To new entrants to the series, you have two options.

The first is to spend a good amount of time reading up on the lore, but I find that to be a waste of time. The story in 5, while frequently bizarre is never in the way, and at worst can be ignored. The mind of Kojima must be a foreign country indeed.

On top of the single player is a huge and complex multiplayer Metal Gear Online, which on consoles is already available, but players on PC will have to wait until 2016 to go online. 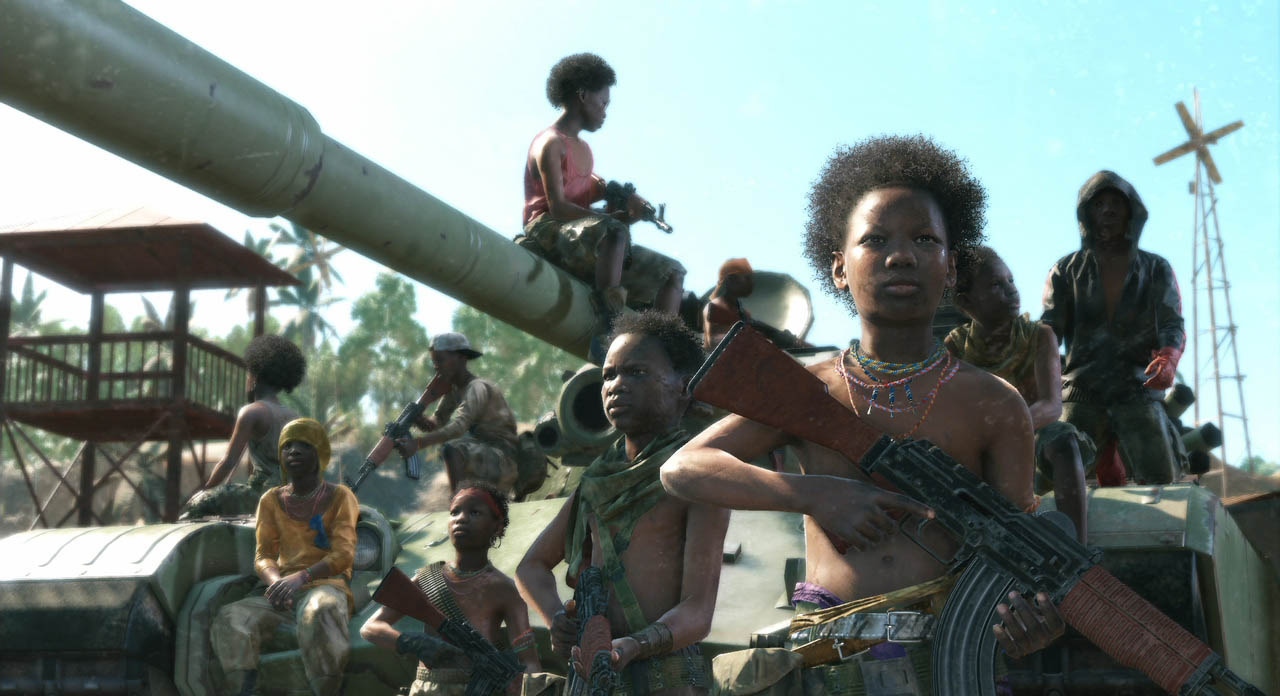 Players can extend Mother Base with Forward Operating Bases, interacting with other players through this. All this points to how Metal Gear Solid V is an absolutely massive game, one that demands your time, your energy and your resources.

To experience the full experience, you will need to have patience, attention to detail. Fortunately you will also need a healthy dose of creative thinking, improvisation skills and ingenuity to master what I think is a game that will stand as a master of open-world stealth.