As NVIDIA’s impressive (though hard-to-come-by) 3000 series continues it’s rollout, the GPU releases have moved down the stack from the super performing RTX 3090 to something a little more realistic for most people.

Now, with releases such as the ASUS’ TUF Dash 15 which I am looking at today, the new generation of graphics is in mainstream, reasonably priced laptops.

Given the popularity of these cards, what can a slimmed down GPU deliver, and what has ASUS been able to achieve with the new generation of efficient CPUs and GPUs?

The version of the ASUS TUF Dash 15 sent to me packed a fast Intel 4 core/8 thread mobile CPU coupled with NVIDIA’s relatively new RTX 3050 Ti graphics with 4GB of GDDR6 VRAM. This is a graphics card so far without compare in the desktop space, the lowest end there being the 3060) and makes for interesting testing. 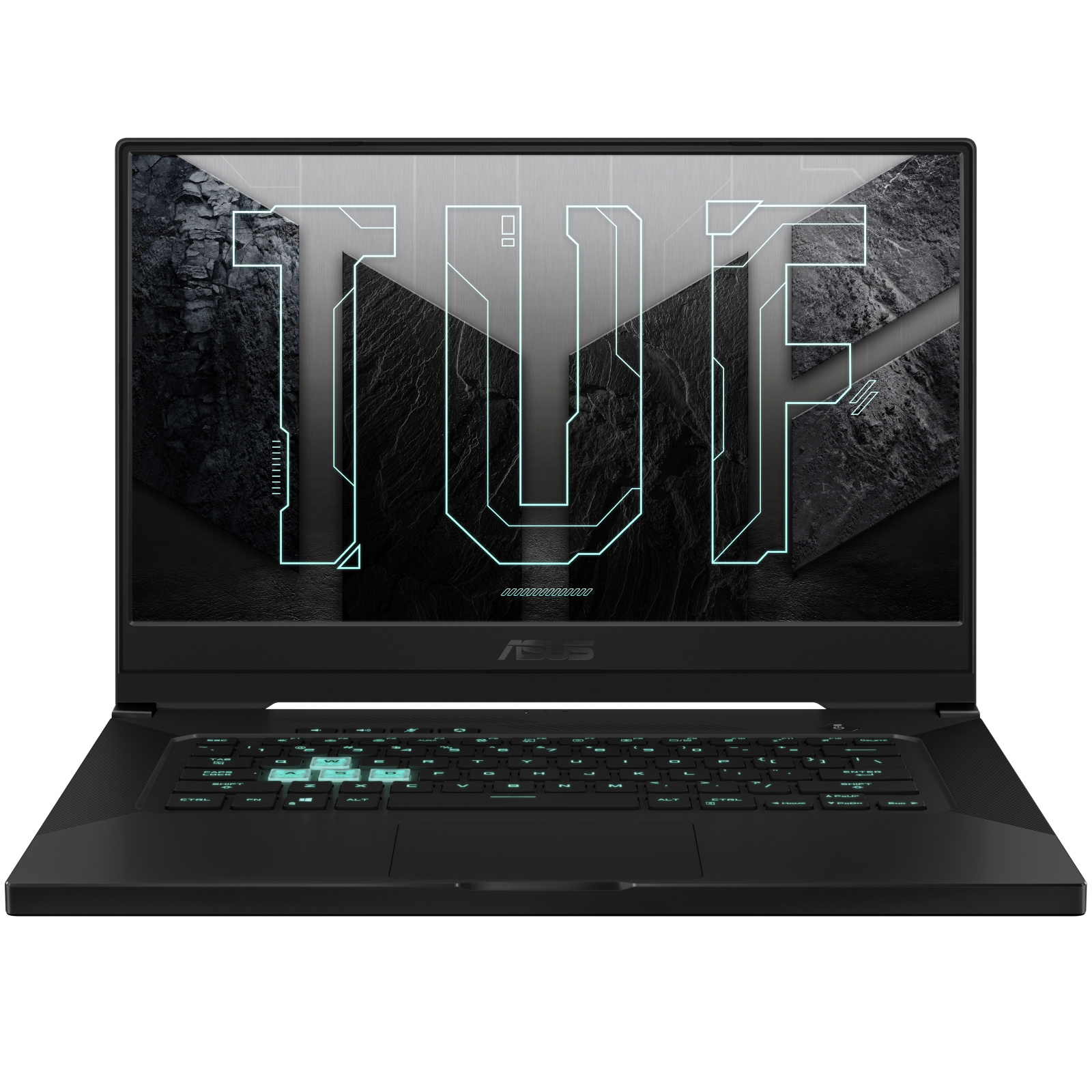 It, together with its companion RTX 3050, are the lowest end NVIDIA or AMD GPUs featuring dedicated silicon for ray tracing and hardware accelerated AI tasks in the tensor cores. DLSS, NVIDIA’s somewhat incredible AI upscaling technique is of particular interest for this card.

Given this new GPU, there’s one main hypothesis I wanted to test with DLSS on the 3050 Ti: can it help keep games running at 60FPS or above.

But before we get to the results, some more on the rest of the laptop itself.

The TUF DASH F15 features a clean, pleasingly clean block-like appearance, with only mercifully small hints at gamery gaudiness in the design of the power and volume buttons. The bright 1080p display is clear, and while I generally prefer higher resolutions for 15” and above, 1080p is the right choice to pair with the RTX 3050 Ti – anything greater would severely hamstring performance.

The keyboard is nothing to write home about but in the same vein it is a solid performer. The keys are slightly mushier than I’d like but really I need to stop comparing laptop keyboards to my multi-hundred dollar mechanical keyboard setups. 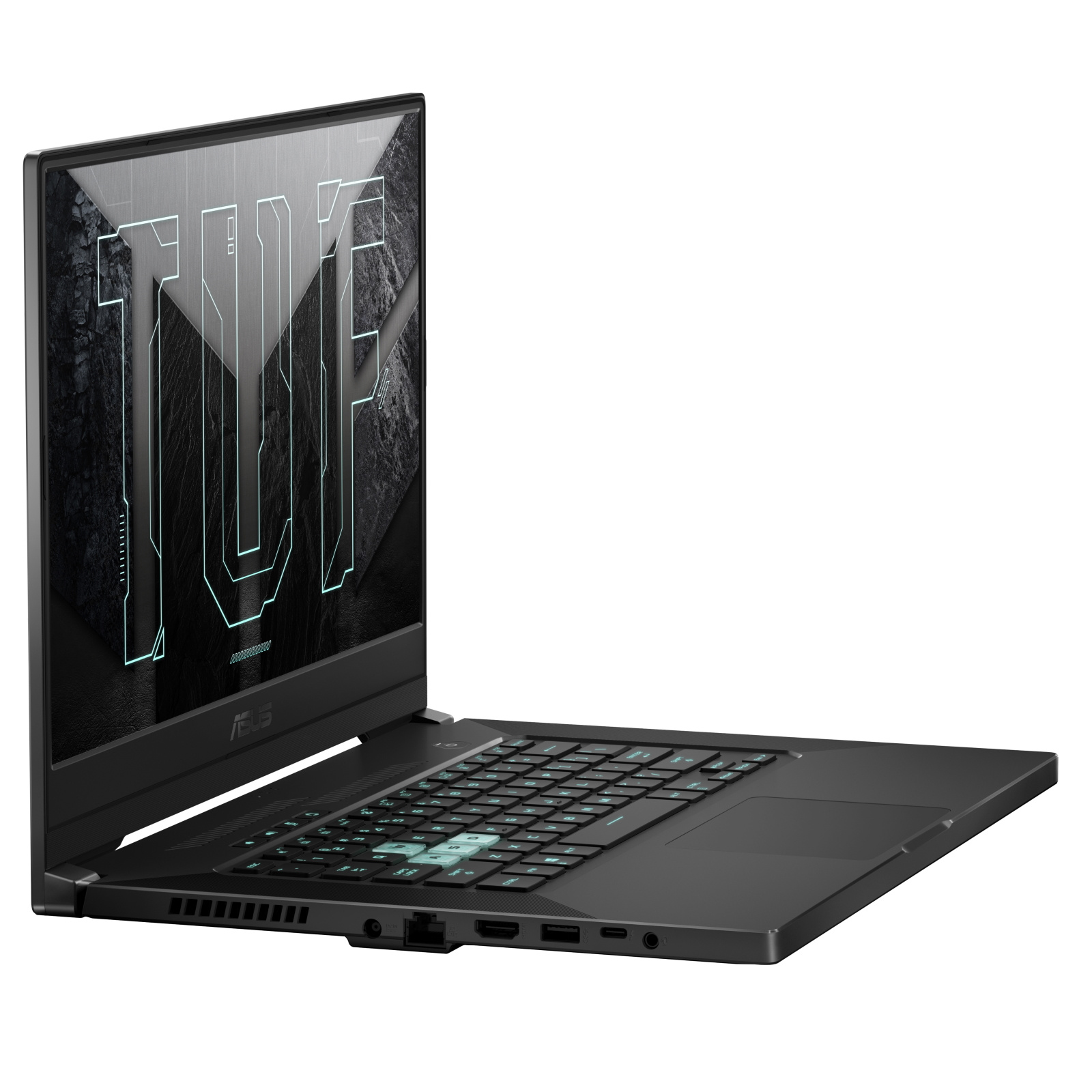 And while the whole monitor has thin bezels, this comes at a great cost of no webcam whatsoever. While this makes the whole device look thinner, I can’t help but think this is a mistake for any device released from 2020 onwards. Without an often out of stock external webcam that needs to be purchased at additional cost this laptop isn’t ideal for school or university online lessons, which are now more than ever reliant on video conferences.

Fortunately, the display does feature variable refresh resolution – a feature often left out on other more mid-range gaming PCs. Strangely, I needed to turn on variable refresh rate manually in the windows graphics settings, but once that was on it worked a treat.

While I wasn’t able to confirm the exact chip used in the laptop, I was impressed with the speed of the SSD for a mid-range device. The version I tested came with a single 500GB stick, with a health Read of 3137MB/s and write of 1606 MB/s in CrystalDiskMark. This puts it firmly above many entry-level and mid range NVME SSDs and was a nice surprise in this class of device.

Alongside a solid, if not overwhelming arrangement of ports, the laptop featured 16GB RAM (please don’t buy 8GB for gaming, it’s not enough), with the important inclusion of Thunderbolt.

While the industry is still in the transition to USB4, specific Thunderbolt ports are an excellent way to improve I/O connectivity on laptops, and potentially increase their lifespan by being able to attach current and future higher-performing GPUs for better performance on the included or an external display.

Now to the games. To test, Turbo mode was enabled the entire time. This allows the laptop’s fans to ramp up louder than usual, which subsequently increases the computer’s ability to deliver higher framerates. While this is indeed louder than other modes, given the relatively low wattage of the chips in this laptop, the fans were not as intruding as I’ve experienced otherwise, great for gaming without headphones.

The system was tested with the included version of Windows 10 and the most up to date drivers at the time of testing. As a reminder, my sample featured a NVIDIA 3050 Ti 4GB VRAM GDDR6 running at what I think was PCIe 4.0 x4 (not x16), though I’m not sure whether this more limited bandwidth affected performance. 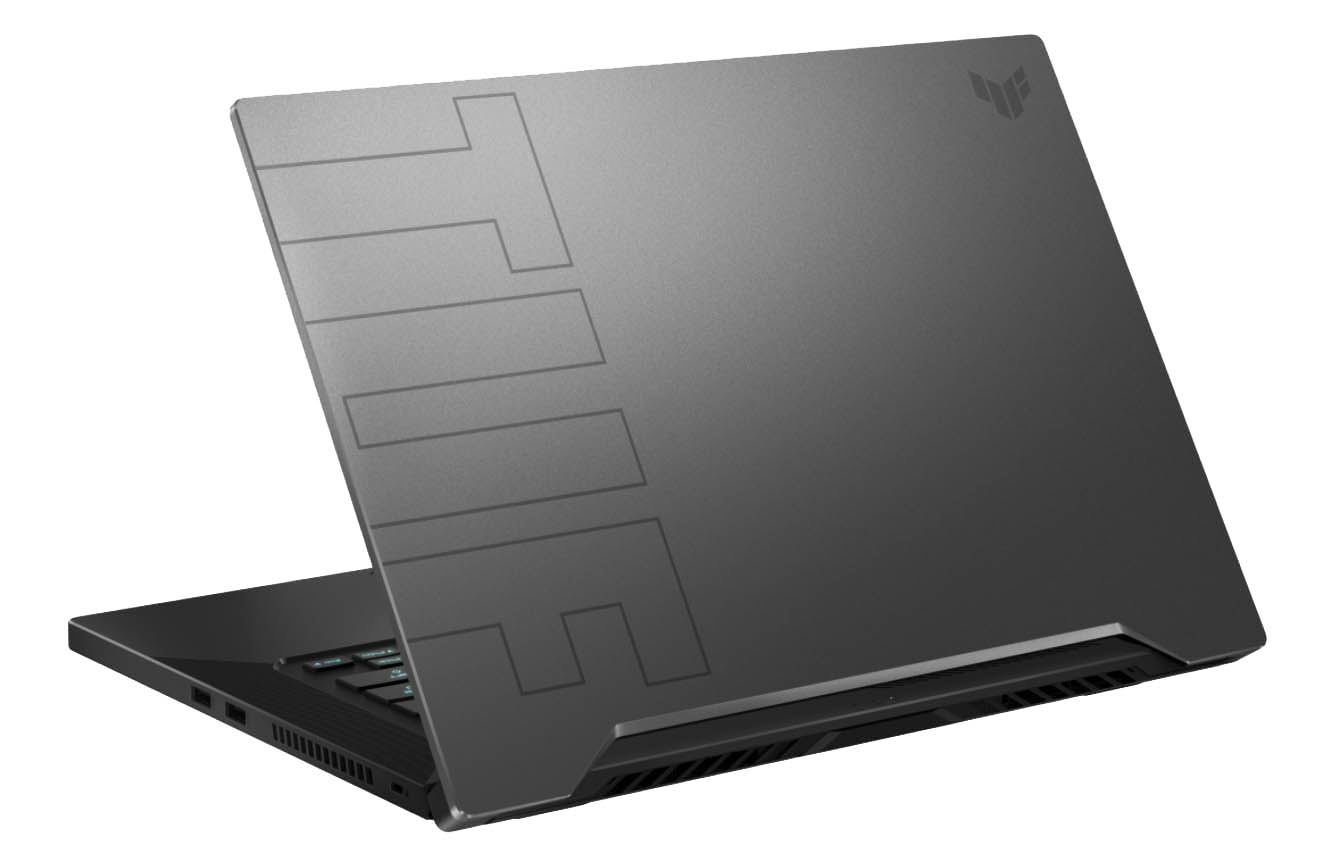 Firstly, Dirt 5 achieved an average of 63.3FPS on High (no RT) and 1% low of 50.5. It performed slightly under 60 during most of the benchmark, but thanks to the adaptive screen these will slide by unnoticed. Or you could just use dynamic resolution scaling or drop a setting or too.

This is a great result for a 2020 game, however Dirt 5 did complain about available texture memory, a theme that will become apparent in future titles.

The excellent, and well optimised Doom Eternal at Ultra and DLSS Quality achieved an average of 111FPS, though there were some dips during non-interactive glory kills. Strangely, I was not able to activate ray tracing in this title for some reason but this is an excellent result nonetheless. Again, I had to lower the texture memory pool because 4GB VRAM wasn’t sufficient for standard Ultra settings.

Gears 5, an excellent demonstration of the power of Unreal Engine 4 at 1080p Ultra, achieved a 79FPS average with 1% low of 55.5 FPS. You could get even better performance with smart nips and tucks to settings, so fans of third person shooter action should be very happy with this.

Technical powerhouse Control by Remedy Entertainment, using both DLSS and medium ray tracing ran at a solid 62FPS, with some areas substantially higher than this. High textures were used to fit into the 3050 Ti’s 4GB of available VRAM.

While I don’t generally play FFXIV, the MMORPG has an excellent benchmark for the upcoming Endwalker expansion, and using top settings at 1080p achieved an average of 89FPS, enough to keep frames high even with vast amounts of on screen chaos.

Lastly, Forza Horizon 4 at 1080p Ultra runs at an average of 68FPS. Tellingly, lowering the settings to high, which still looks excellent, ran at 104FPS. Given that racing games benefit from higher frame rates, which gives better handling and lower input lag, rather than higher resolutions, this would be a no-brainer decision for me, but either option will result in very playable frame rates either way.

So from this suite of tests, it is easy to see that the RTX 3050 Ti is capable of handling 60FPS 1080p performance in some demanding titles.

The inclusion of DLSS capabilities certainly helps to increase performance in cases, such as Control, where enabling ray tracing would have meant a dip below that magical 60FPS threshold. The limited VRAM does limit texture quality in some areas, but with only a 1080p display the impact of this is lesser than for a GPU targeting higher resolutions.

Overall, the ASUS TUF DASH 15 is confirmation that if you’re satisfied with 1080p gaming, entry into the PC gaming space is viable right across NVIDIA’s RTX stack.

With a lean, unobtrusive design, future-proofing with DLSS and Thunderbolt technology, and a CPU that is well matched to 1080p gaming, the TUF DASH 15 is a solid entry-level option for occasional or aspiring gamers.

Personally, I am happy to see ray-tracing and DLSS come to the lower end of the NVIDIA range; their 16 series always felt like a stopgap to me. Without a real competitor at this level from AMD, NVIDIA has crafted a compelling GPU, and ASUS has given it the space to work. 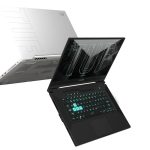