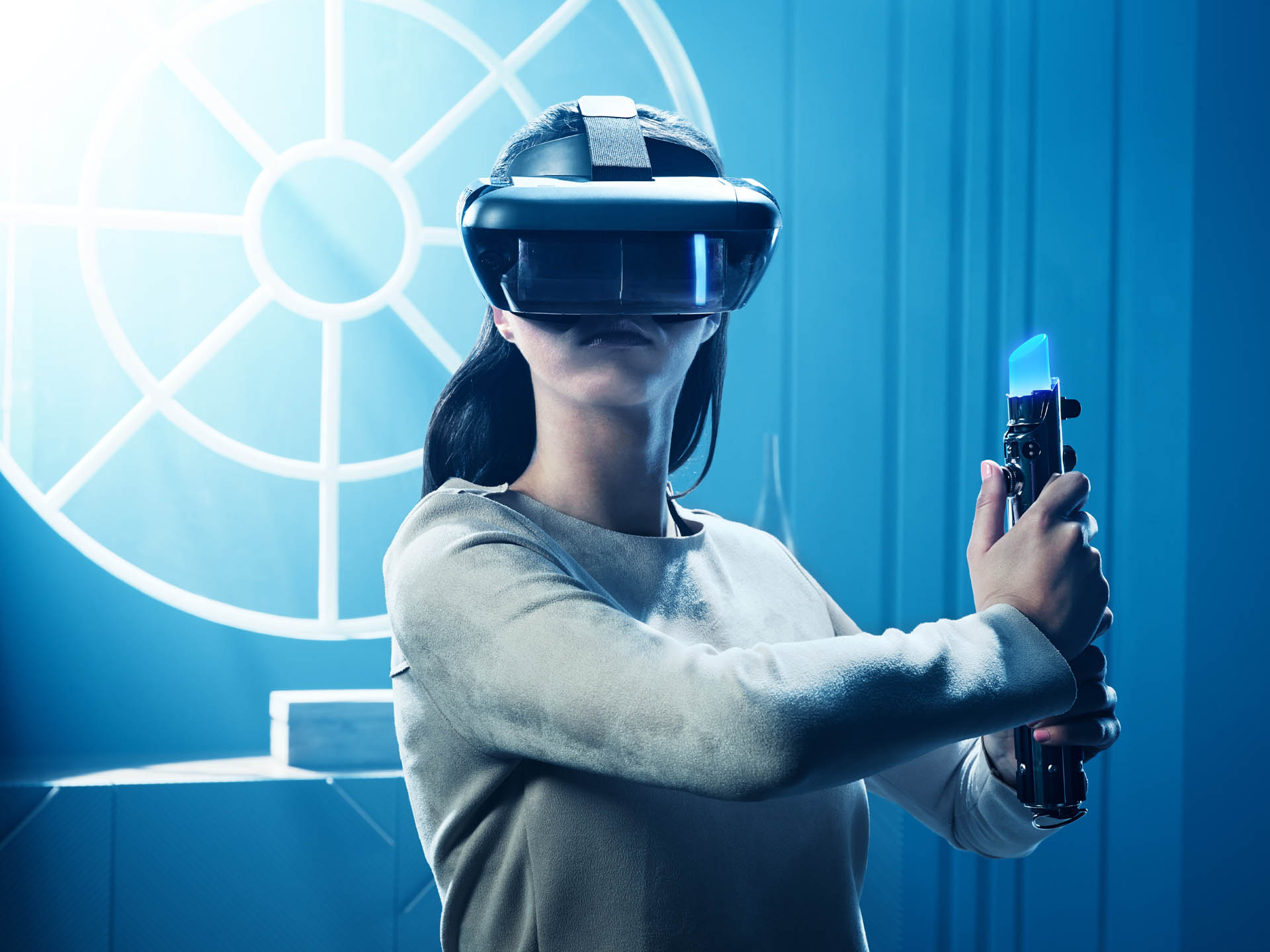 Lenovo, known for it’s personal computing products brings us Star Wars as it should be. Up close and in your face. Literally.

Their Star Wars: Jedi Challenges AR unit released late 2017 and showcased the unit to us here at STG in a one-on-one at Armageddon 2017.

While the video gaming industry is going down the Virtual Reality (VR) track, Lenovo opted to utilize AR (Augmented Reality) which is also seeing a surge with the newly released Windows 10 update for Mixed Reality.

Unlike VR, which closes you off completely from the world around you and places you into a virtual 360 Degree interactive environment, AR makes use of your real world environment and most smartphones are equipped with AR technology already built in to their camera software.

The Star Wars: Jedi Challenges is a completely stand along product, not reliant on anything but your phone and places you in to the throes of battle against virtual Star Wars opponents to the likes of Lightsaber battles against the Kylo Ren and even Darth Vader himself.

The light-weight headset has a tinted but clear visor, so you can still see your surroundings and any objects that are likely to be in your way.

There is a bit of a set up though, before you can harness the power of the Force. 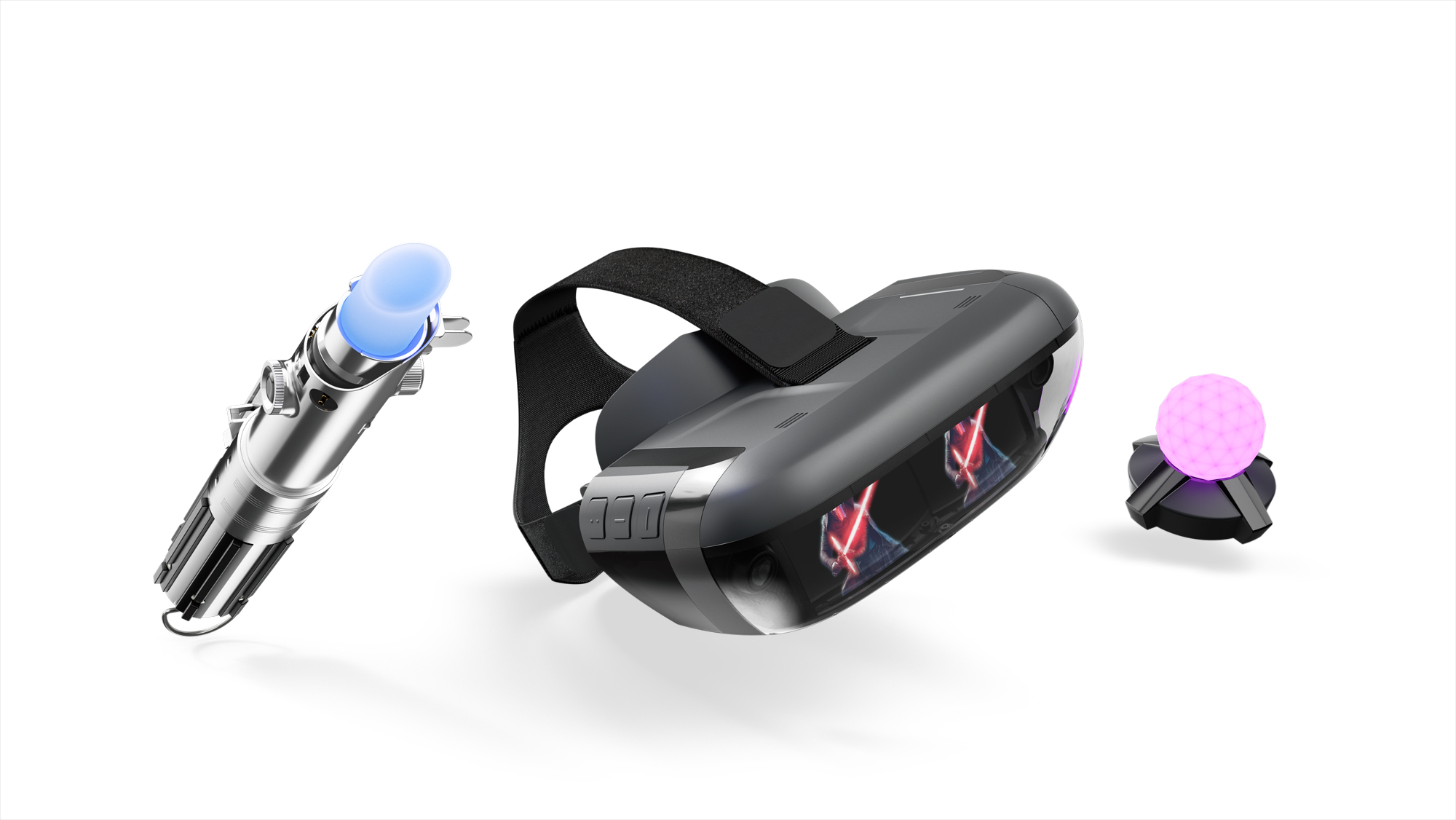 You will need to use your iOS or Android smartphone (generally up to a 6.3 inch smart device will fit the internal adjusters) and install the Jedi Challenges App from Disney.

The App does cater for specific Android and Apple smartphones, however, if yours is not on the list (which I am told is being updated regularly) then you just need to find the best match.

Along with the headset there is also a ‘Lightsaber’ controller which will connect to your phone via bluetooth and the headset and Saber need to ‘see’ the floor sensor Beacon, which for optimal play needs to be around 3 meters from where you are standing.

Once you have paired up the Lightsaber, start the Jedi Challenges App and go through the setup tutorial.

Swipe your way through all of this – then slot your phone in to the device bay, which inserts like a cassette in to the AR headset.

Connect the micro or USB-C cable from your smartphone to the headset, and make sure the headset is on (and charged).

Both the headset and the Lightsaber controller are rechargeable, however oddly the floor Beacon sensor is not and runs on AA Batteries.

Phew, set up done and you’re good to go. 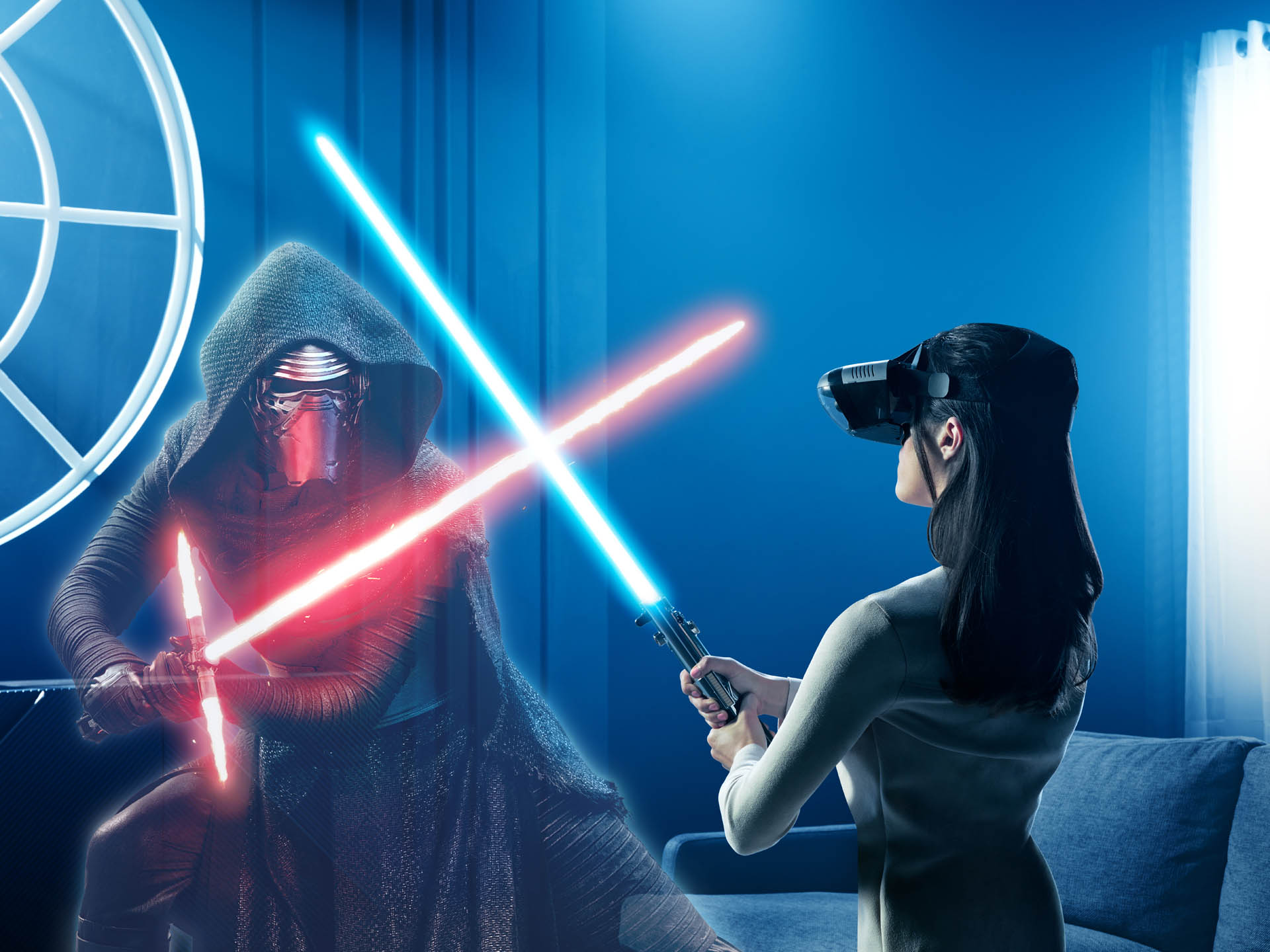 It can be a bit overwhelming at first, but after you have played the Jedi Challenges AR a few times, it becomes super quick to connect up and start battle.

Playing the AR Game is so worth the time it may take to get going.

Before you is a set of Lightsaber wielding options, you can train, you can battle, in real time in your own real world as the characters from Star Wars appear before you in an alternate reality.

Your Lightsaber control becomes the real thing in this Star Wars universe that you have awoken and your aim is to survive Saber fights and work your way up to the rank of Jedi among many differing Star Wars planets and environments as you unlock them.

While scoring hits with a Lightsaber on any given day is a satisfactory achievement, the Lenovo Star Wars: Jedi Challenges offers strategic play aswell with HoloChess and super impressive and immersive on-ground army battles. 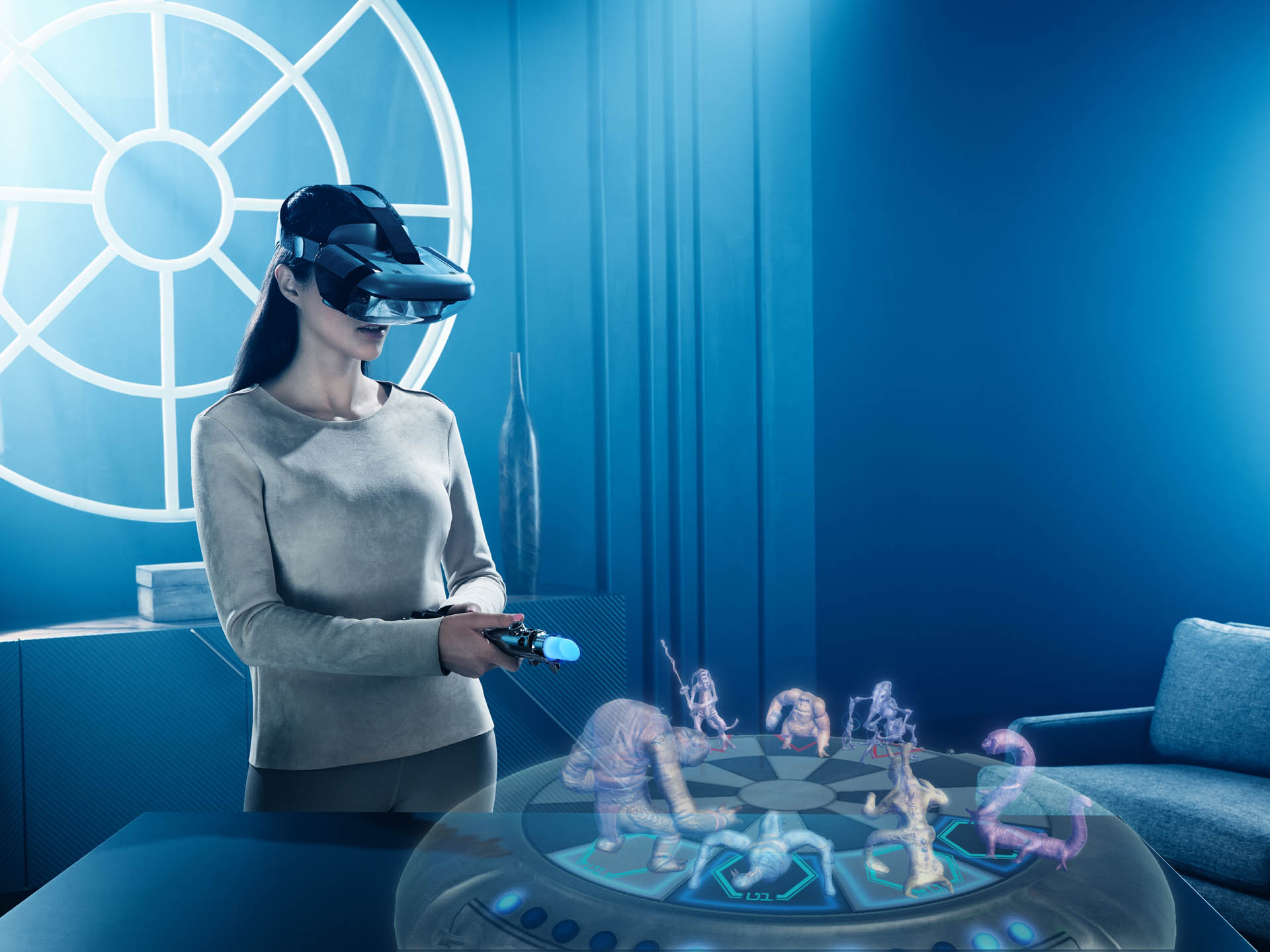 The fights can be fairly easy through to insane. There will be a learning curve at first as you get used to the AR, but once you’ve mastered it, you will work out your opponents pattern (and they do have one), especially if you replay the same match a few times.

The wow factor of the Lenovo Star Wars: Jedi Challenges is way up there, but after many, many goes on the device the novelty does wane slightly.

Disney (who own the Star Wars / Lucasfilm franchise) and Lenovo are well aware of this and constant updates to the Jedi Challenges App ensure that there will always be more content, keeping the AR kit as relevant and exciting as the day you bought and unboxed it. 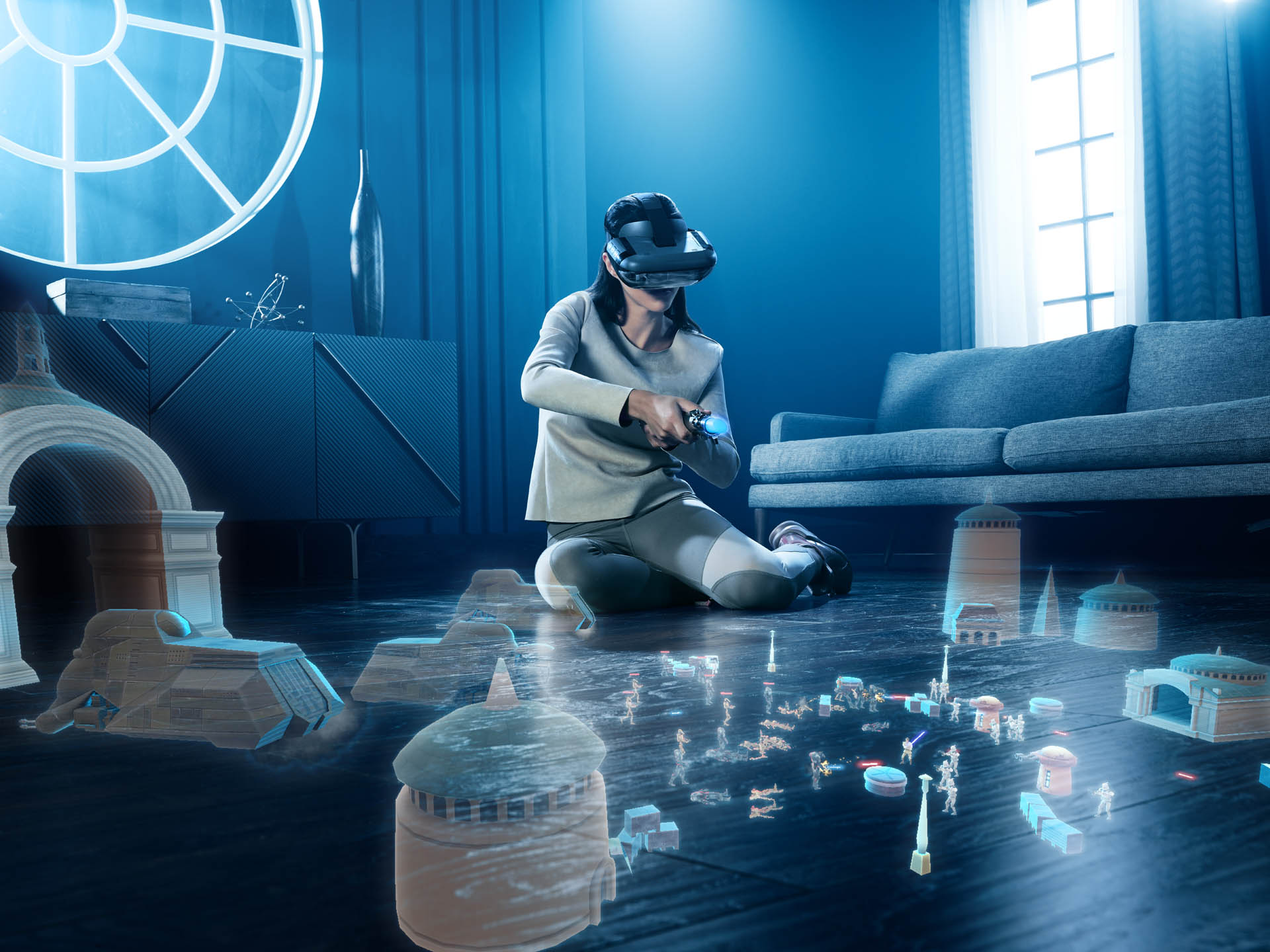 Being that the AR headset is actually a very simplistic affair, basically mirroring your smartphones screen through the goggles of the visor with some control functionality and enabling your phone to do the App and AR Processing, the whole set up is on the lower side of the price factor.

Lenovo have managed to bring AR to the masses and within affordability and to say that Jedi Challenges is not an addictive workout is an understatement.

You definitely need to try one of these out and unleash that Jedi within. 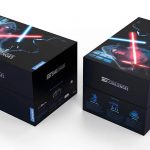