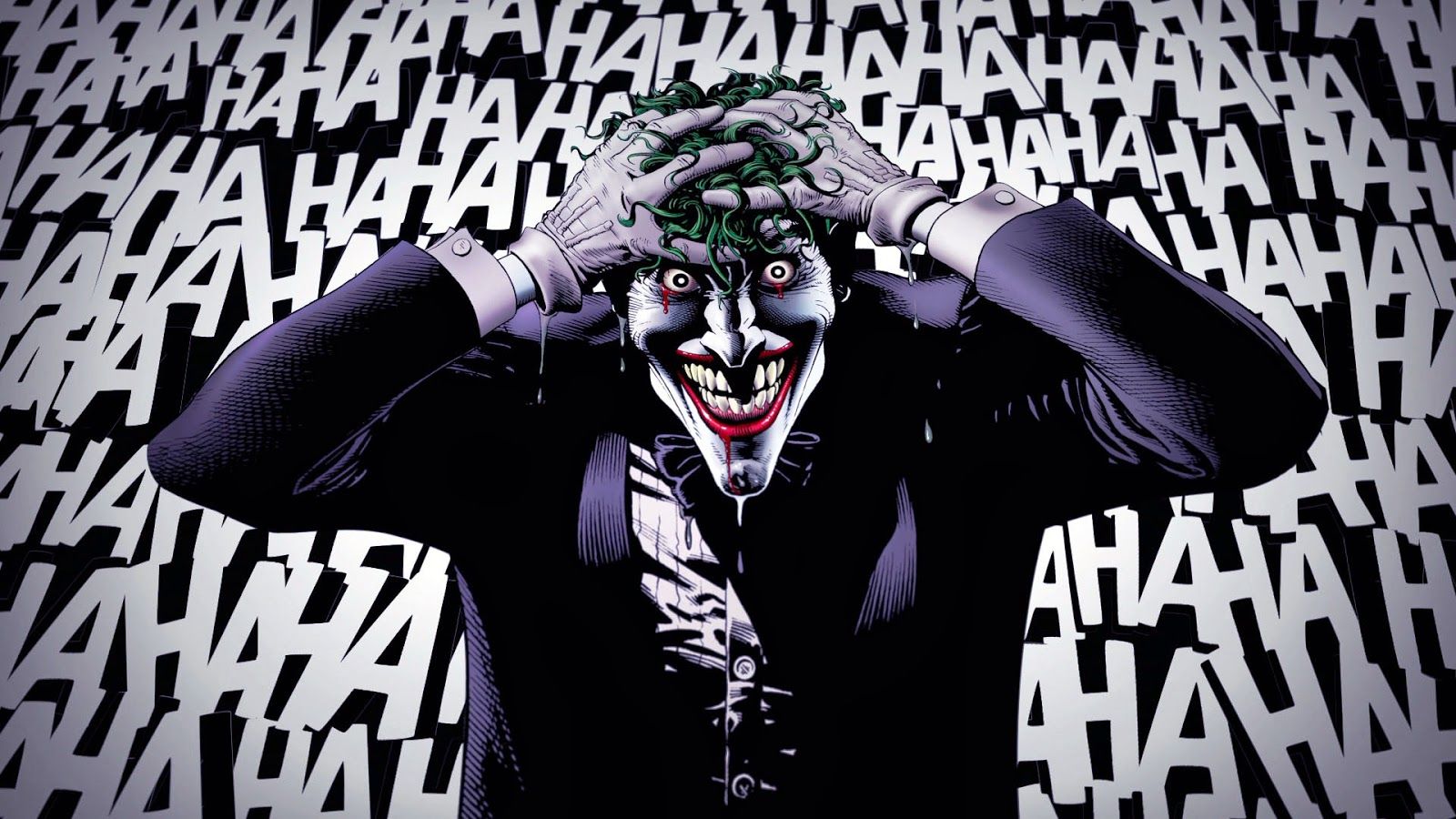 What does it take to break us? To chip away at our very core and blacken our soul? Can one bad day really drive a man to lunacy? The Joker, a DC Comics’ villain and Batman’s greatest adversary, seems to believe so.

Batman: The Killing Joke, the animated film produced by Warner Bros Animation, is an adaptation of the critically acclaimed graphic novel, of the same name, by Alan Moore. Highly anticipated and long awaited, this film made its debut at the 2016 San Diego Comic-Con and premiered for one night only at theatres in New Zealand on July 24th, 2016.

As a huge comic book nerd and Batman fan (particularly of the 90s animated series and the animated films), naturally I made it a point to attend the one night screening and what I witnessed changed the way in which I saw the character of Batman and Batgirl as well as sealed the Joker’s fate as the most sadistic villain I have ever seen.

Batman: The Killing Joke is dark, ominous and dismal, much like the graphic novel itself. It calls upon our innermost demons, questions morality and leaves us wondering if one bad day truly has that much power over our sanity. 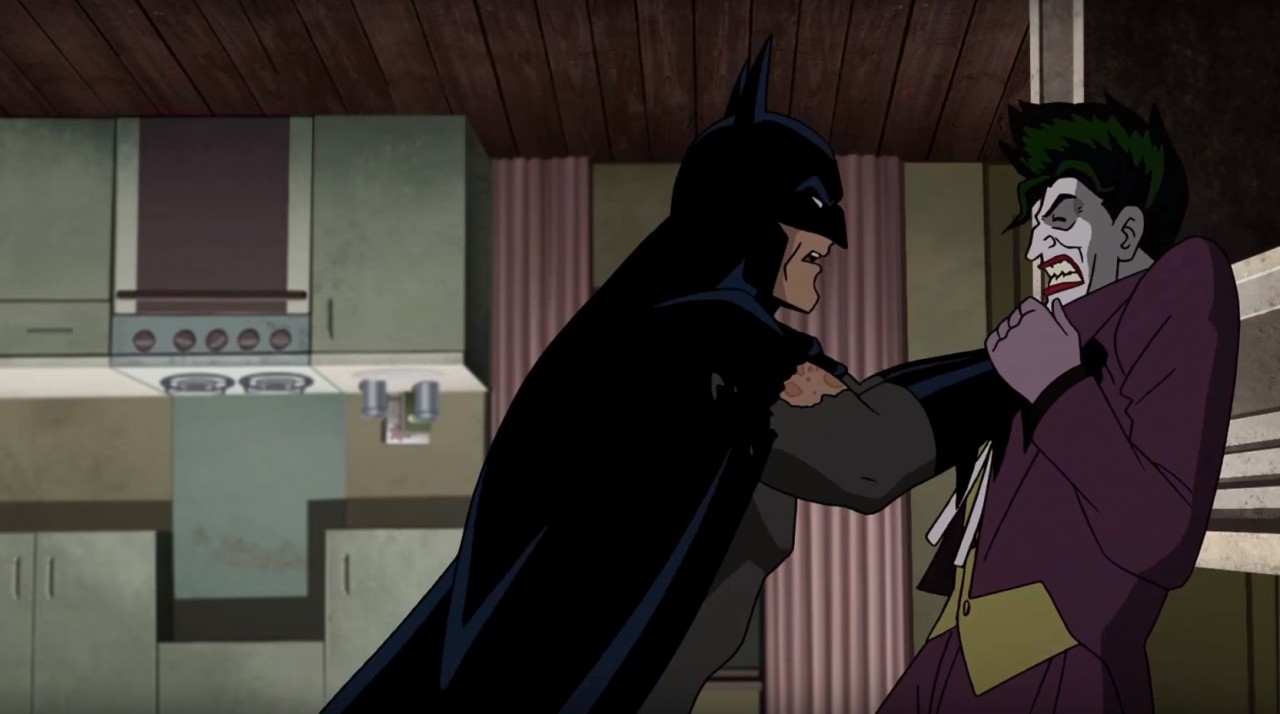 In order to remain true to the general length of an animated feature, the opening of Batman: The Killing Joke added a familiar subplot to the main narrative of the film.

The opening plot featured a story much like many others we have seen before in other animated features and cartoons. Batman, and/or one or more of his sidekicks take on a criminal and save the day. In this film, the subplot focuses on Batgirl, illustrating the female crime-fighter’s prowess as a vigilante and her desperate need to gain the approval of her mentor. That’s what we are led to believe in the first few opening scenes anyway.

Batgirl, the ultimate good girl in the Batman universe, aims to prove herself as a crime fighter worthy of being an equal to her mentor, Batman. Knowing that this is an arduous task for the daughter of Gotham Police’s Commissioner, James Gordon, we can sympathise with Batgirl as she attempts to take out the rogue nephew of one of Gotham’s biggest crime bosses. Sure, her methods are rather reckless and less efficient but the girl does try her best and we can certainly appreciate that. However, things take a rather twisted turn for the worst when it suddenly becomes apparent that approval and respect is not all Barbara Gordon a.k.a Batgirl seeks from Batman. 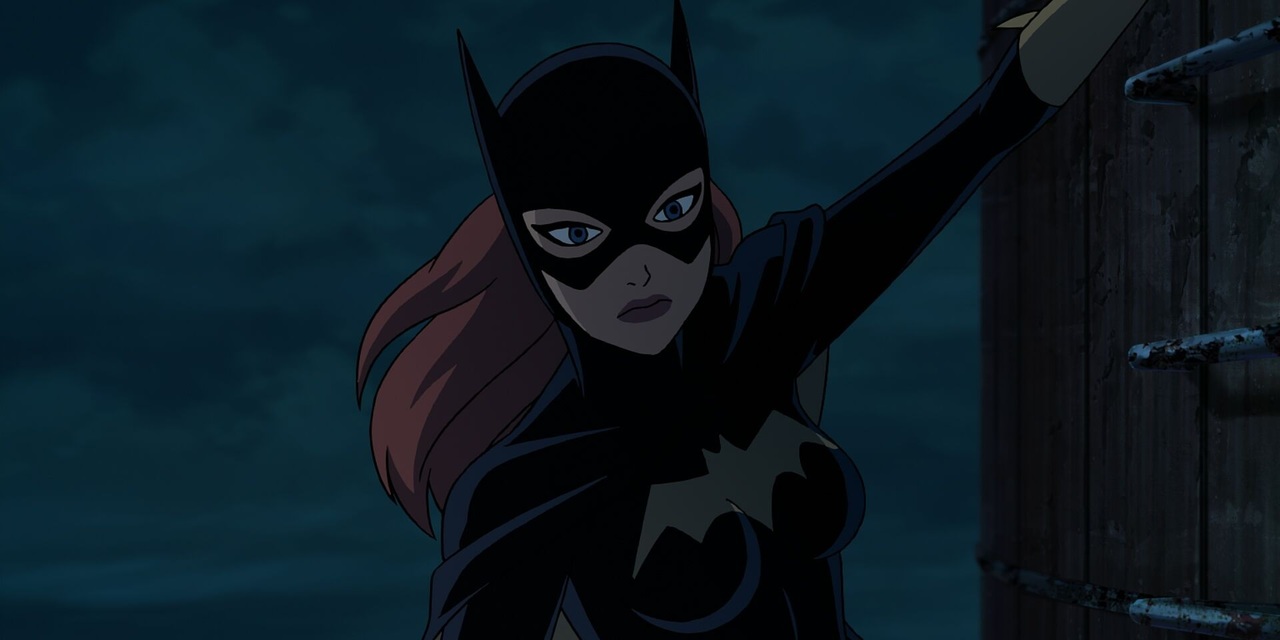 In a rather quick turn of events, Batgirl goes from bad-ass vigilante to typical female who does not seem to get the concept of the term ‘he’s just not that into you’. After a few temper tantrums to Batman about being equals and being part of the investigation, the scuffle that ensues turns into a bizarre and off-putting makeout (and implied sex) scene which leads me to question Batgirl’s pride and self-respect as well as Batman’s integrity and decorum. This build up of there being some sort of romantic relationship between Batman and his young protege took the fun out of Batman: The Killing Joke for me. While attempting to humanise Batgirl, provide her a bit more screen time and give the popular female superhero a proper send-off prior to being shot and left paralysed by the Joker, Batman: The Killing Joke instead stripped the character of her credibility and status as a well put together female. What comes next is even worse, as Batgirl essentially turns into the typical ‘needy’ and clingy one night stand who can’t tolerate a man’s silence after the deed is done and worries about why he isn’t calling.

As for Batman, his actions essentially let me to believe that he is no better than his playboy alter ego, Bruce Wayne, who is simply unable to control his baser instincts. Batgirl has always been depicted as being similar in age to Robin/Nightwing and therefore has more of a father/daughter or older brother/little sister relationship with Batman. To think that Batman wouldn’t make any kind of effort to stop Batgirl from her advances and instead pulls her in further, illustrates that he is derelict in his duty as guardian and mentor. 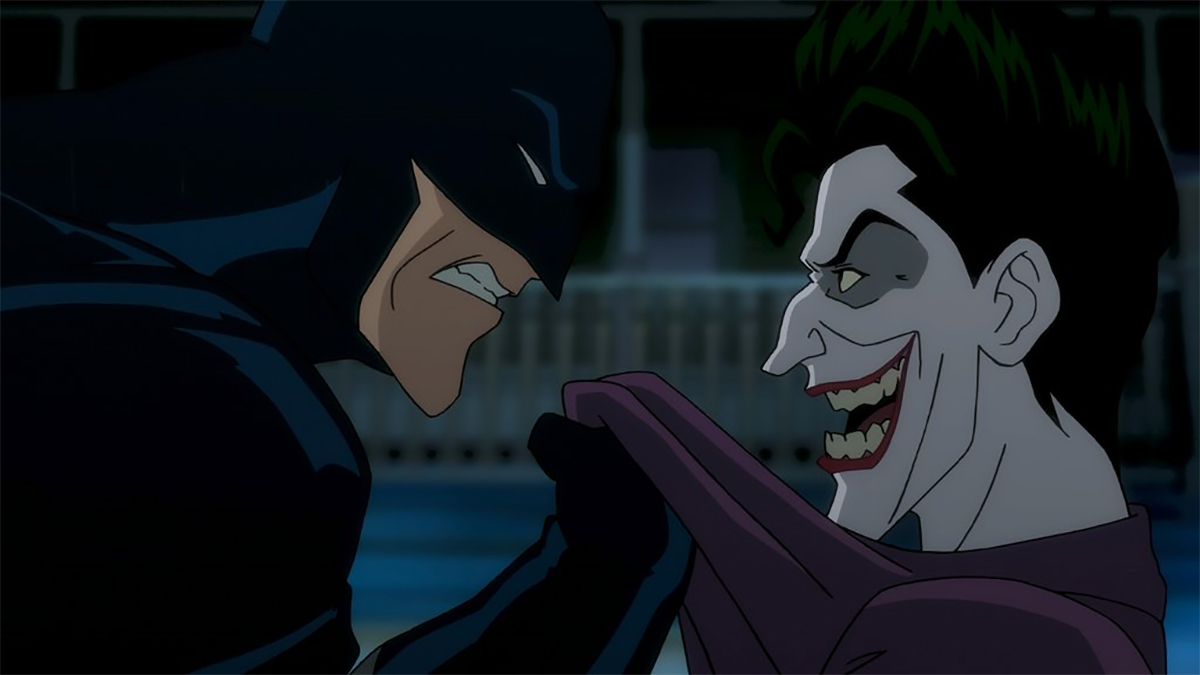 As soon as Batgirl is shot by the Joker, in the most iconic and horrific scenes in comic book history, the main plot and storyline of the film takes place and continues on right through to the end. The scenes depicted in the film are almost exactly the same as the graphic novel with the scene sequences following the novel frame by frame, cell by cell. The main difference is more due to the astounding voice acting of Kevin Conroy (Batman), Mark Hamill (the Joker) and Tara Strong (Batgirl) who bring out each character’s personality in a way that the graphic novel couldn’t.

The animation style and visual effects of the film too was superb and on point. Remaining true to its source material, the second half of Batman: The Killing Joke forces us to ponder the ways in which we live; whether one bad day is enough to break and cripple us.  With Batman regaining his senses and returning to focus on the Joker, the film returns to its roots and formulas of good guy vs bad guy. 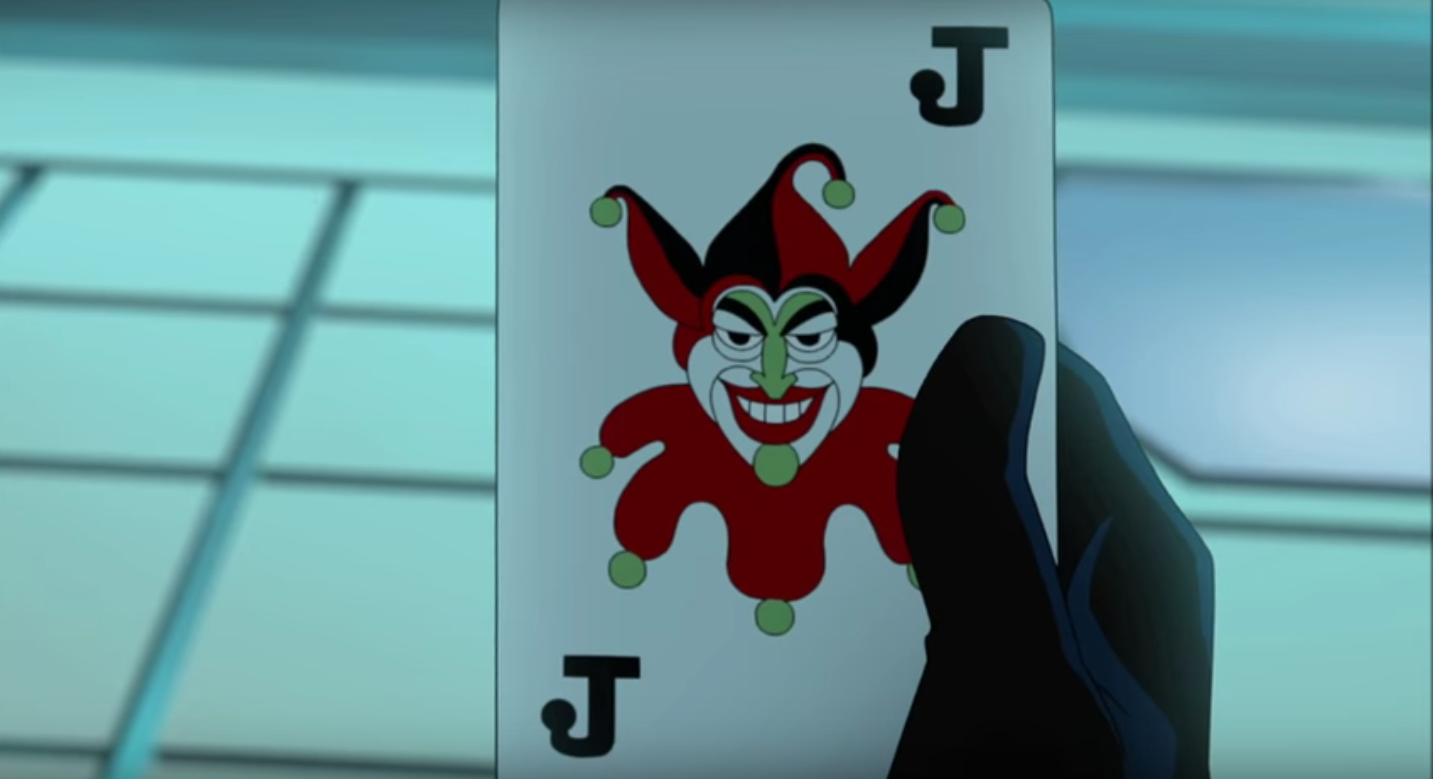 If ever the question arises as to who portrays the real and true Joker, it certainly would be Mark Hamill for me. Hamill’s take on the Joker and his top notch voice acting skills gives the Joker the twisted, psychotic characteristic in which he is known for. Where the character is gruesome and cruel in the graphic novel, the way in which he is brought to life in the animated film (for example, his musical number) only brings about a whole new meaning to the term psychopath and forces viewers to consider the similarities between Batman, the Joker and all of us.

Hamill isn’t alone in his excellent portrayal of his character. Kevin Conroy, the man who I think of as the only voice of Batman, returns to lend his voice to the Dark Knight. Conroy’s version of Batman gives the character a much darker edge, illustrating the character as being stoic yet terrifying. 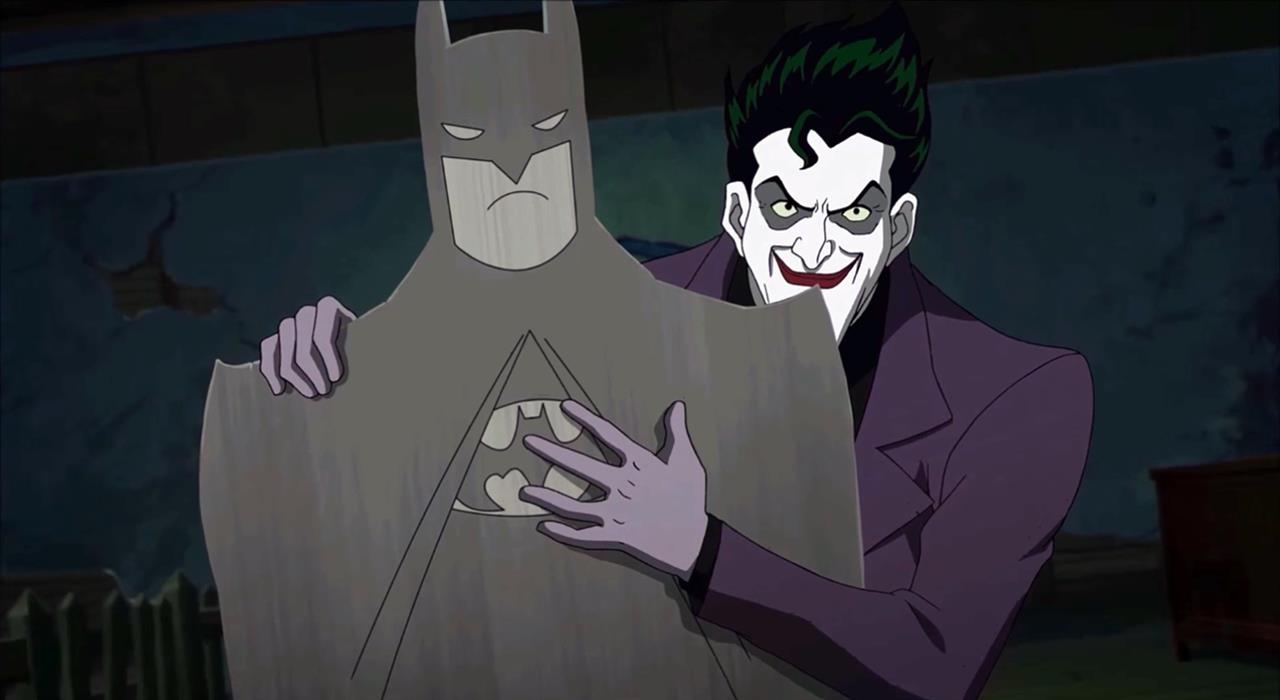 All in all, Batman: The Killing Joke is worthy of its R-18 rating as it forces us to delve deeper into the psyche of Batman and the Joker. We are forced to ponder the integrity and morals of Batman, the ramifications of sexual violence, and the violation of the peace and sanity we hold dear. The film brings many of these themes to light in ways that we can only imagine in the graphic novel. Despite a lack of real substance at the beginning, the film becomes enjoyable despite its dark themes once the main plot kicks in. Additionally, the final scene of the film appears to repair the damage done in the Batman/Batgirl subplot and is of particular importance in the DC comics continuity. Whilst not the best Batman animated film I’ve seen, Batman: The Killing Joke is worth the watch, especially if you are a fan of the graphic novel.